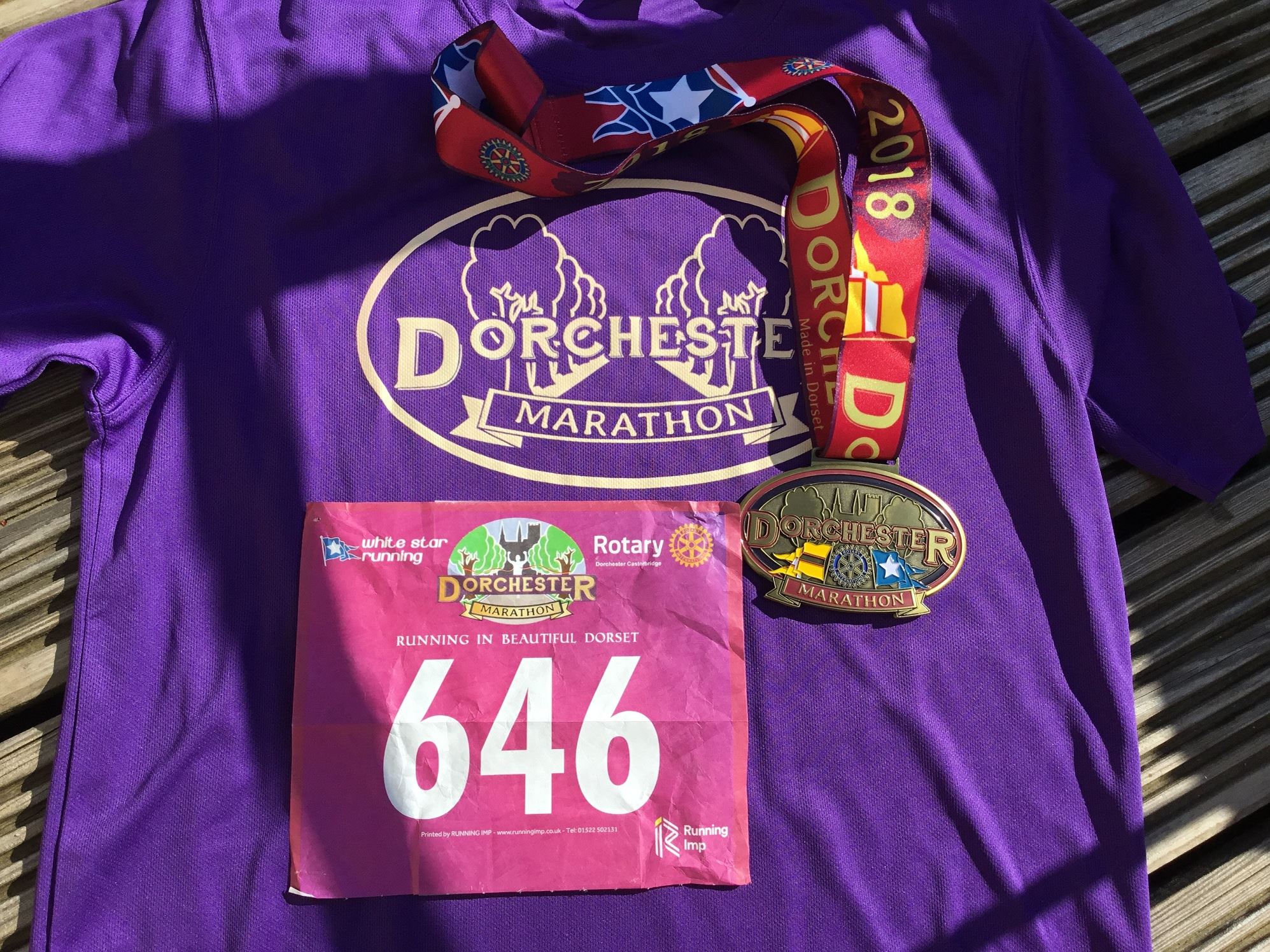 The Dorchester Full and Half    Full Marathon Results     Half Results    Photographs

This is the second running of the WSR event with the normal Camping from the Saturday to Monday with all the White Star normal stuff there like Beer Tent, Food Tents and a band. We have a few club members there on the Saturday some after completing the Egdon Easy. 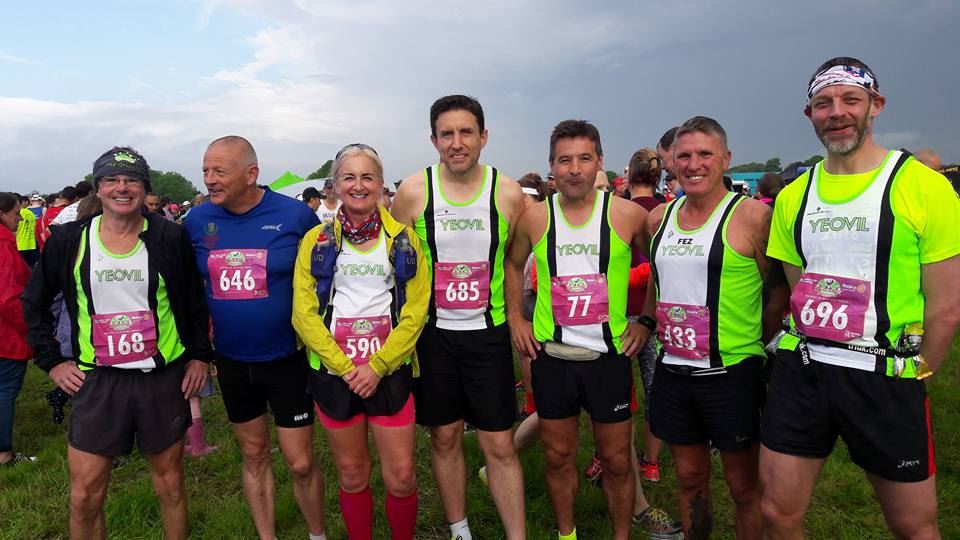 Sunday morning with the marathon starting at 8:30 it poured down as we waited in the Beer Tent, but as soon as we left the tent to go to the start line the Sun came out and it was hot waiting for the Mayor to stop talking crap and get the race started.

As normal for this race I made sure I shot of at the start to get in the pictures and then slowed down to a walk. It got really hot and humid out there and by 9:00 there was not a cloud in site. Aid stations every 3 miles more or less were a godsend with of course the Love Station at mile 20. Kev and Steve Lye took the early lead but at about 15-16 miles I managed to get Steve with a “Come on Yeovil”, Steve had completed the Egdon Easy 10k the night before so was feeling it in the legs. He didn’t know that I had also been busy yesterday completing in my 3rd Parkrun in 5 years.

Kev Brittle was first Club Runner over the line with Lynne our first lady, great running. 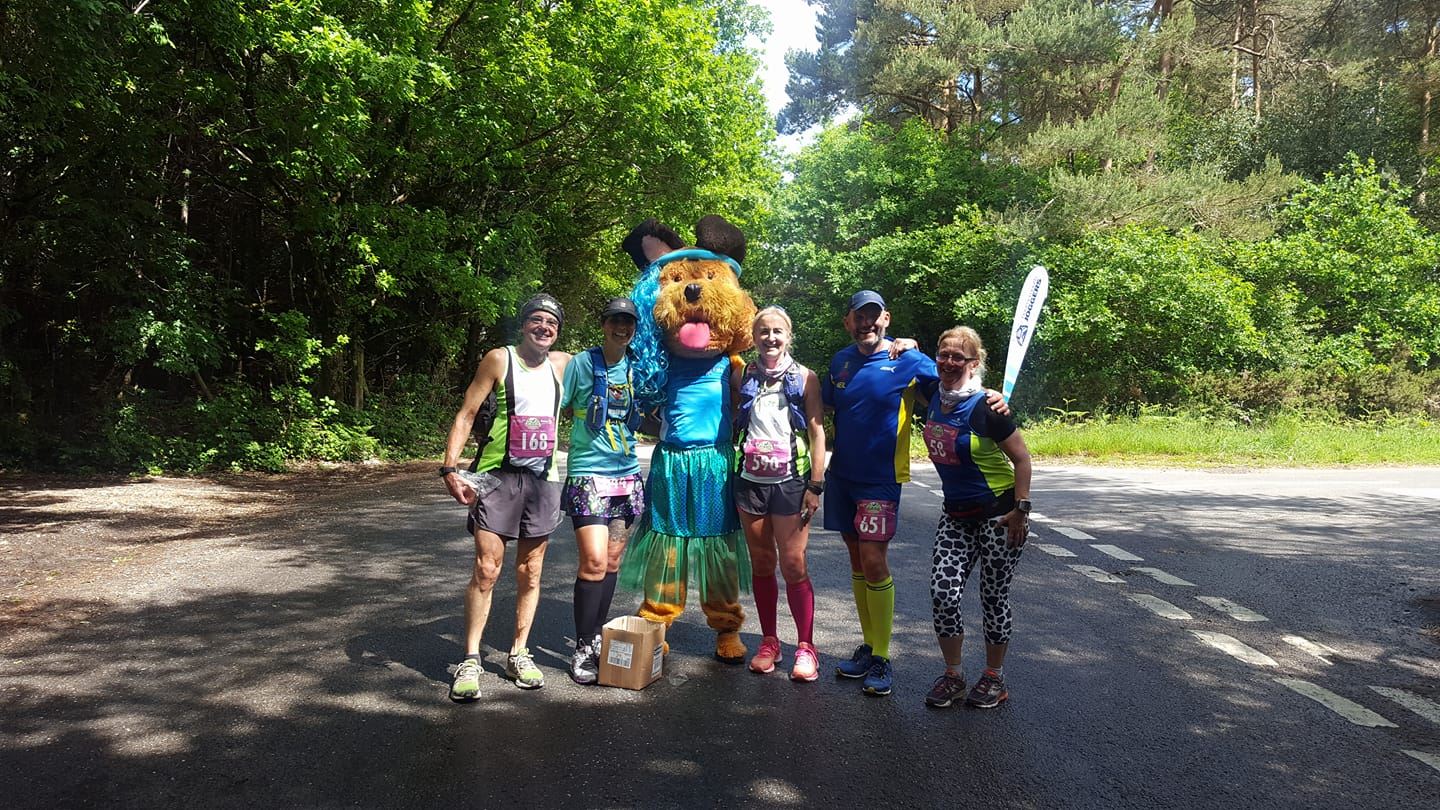 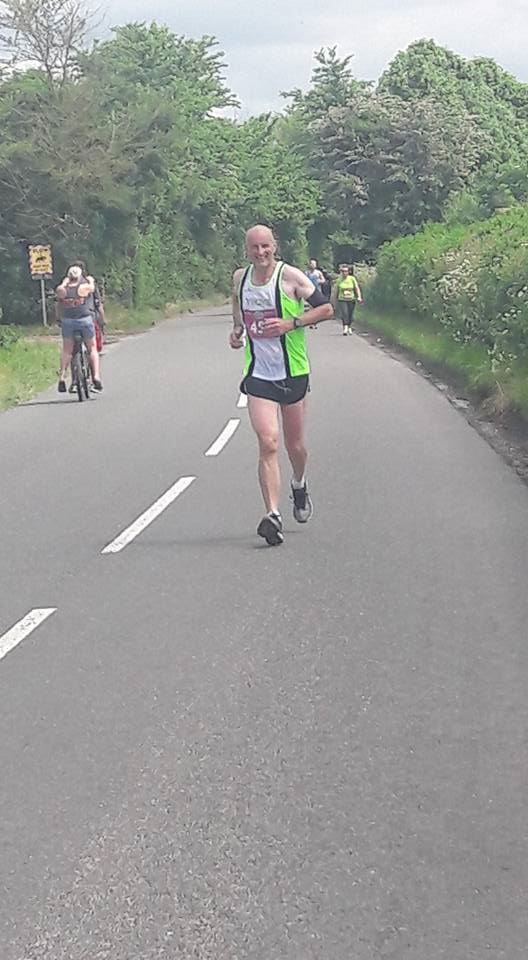 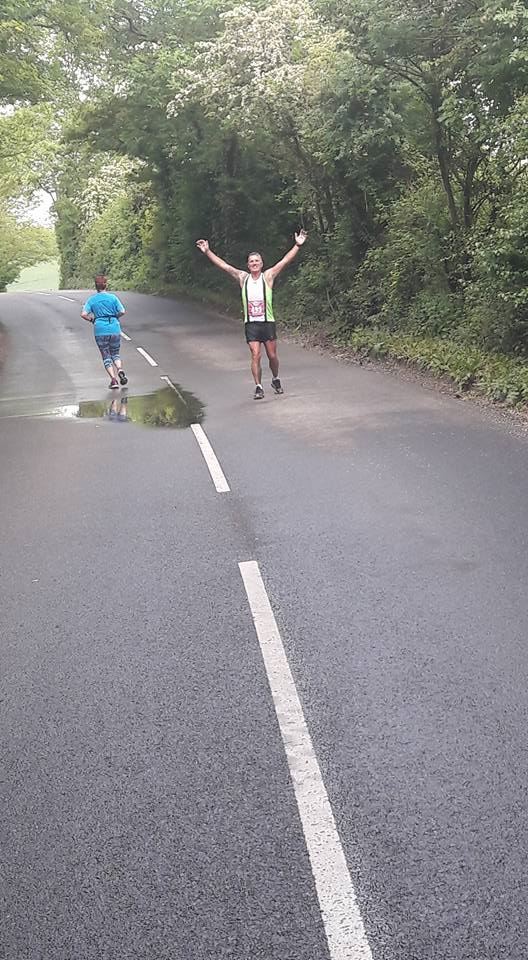 The Half Marathon started at 10, and join the Marathon route at some point so we all hit the love station.

First over the line was Kevin Stenner and Magdalena was the Clubs first lady, both new to the WSR way of doing races. 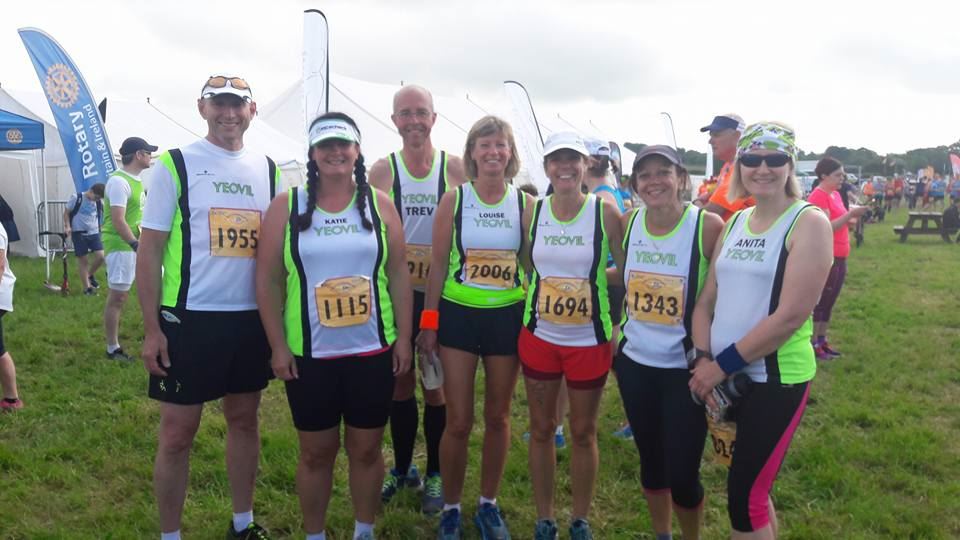 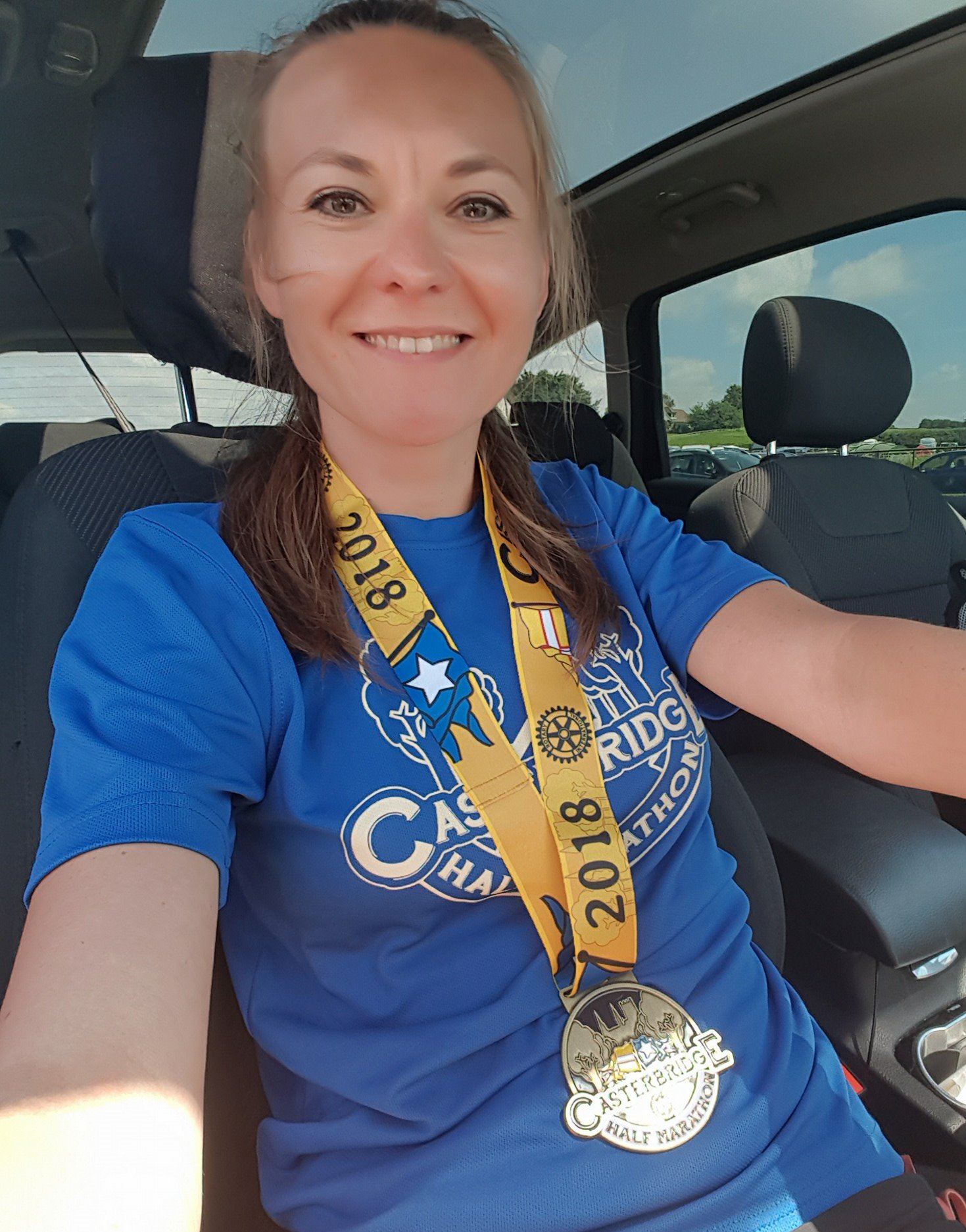 Well done to Dave Stanfield who completed the Jock Marathon up North somewhere. 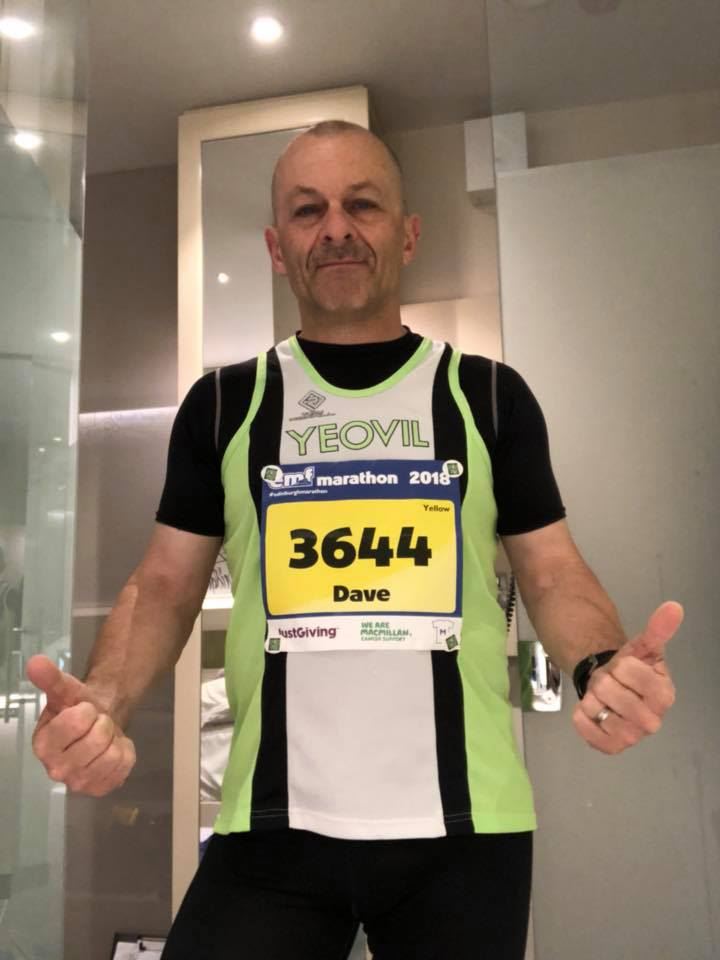 From Lesley: After waking up to very heavy rain this morning, by the time we arrived in Wells the rain had stopped and there were sunny intervals. 11.15 and we were off over the chip timing mat. It was a two lap course with a nasty hill at around 4 and 8k. I cannot tell a lie I ran the hill the first time but my legs made me walk the second time. I was still pleased with my time and managed to just beat my age category rival from Burnham which secured me a £10 age category prize! Well done to the other Yeovil runners today. Jeff and Samantha did particularly well as their 3rd race of the weekend! Daz and Emma both had an amazing sprint finish. Graeme coming back from injury I believe. Kat got her daughter and son-in-law involved. A little bit of music and dancing to listen/watch as I walked back to the car. Well done to WCH for a very well organised race with supportive marshals. A lovely route too. I'll add the results when published. 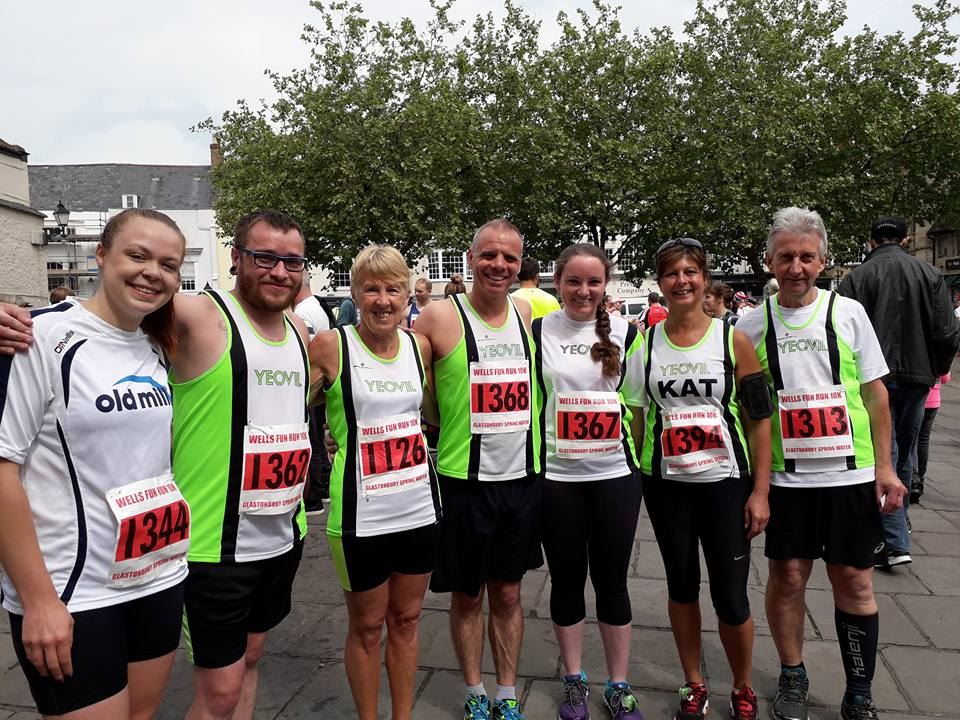 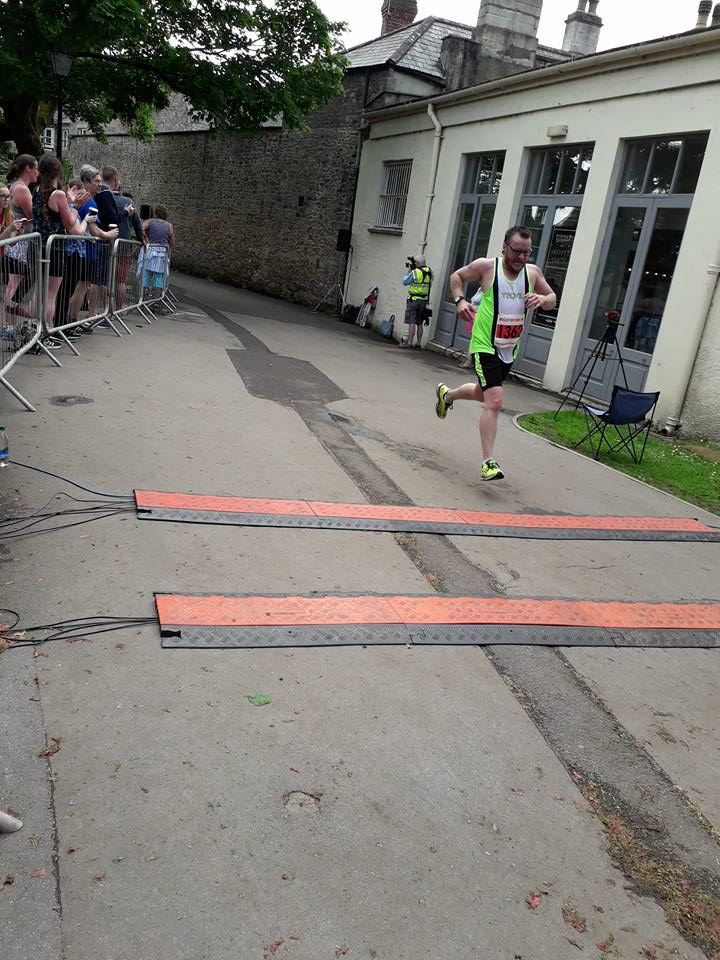 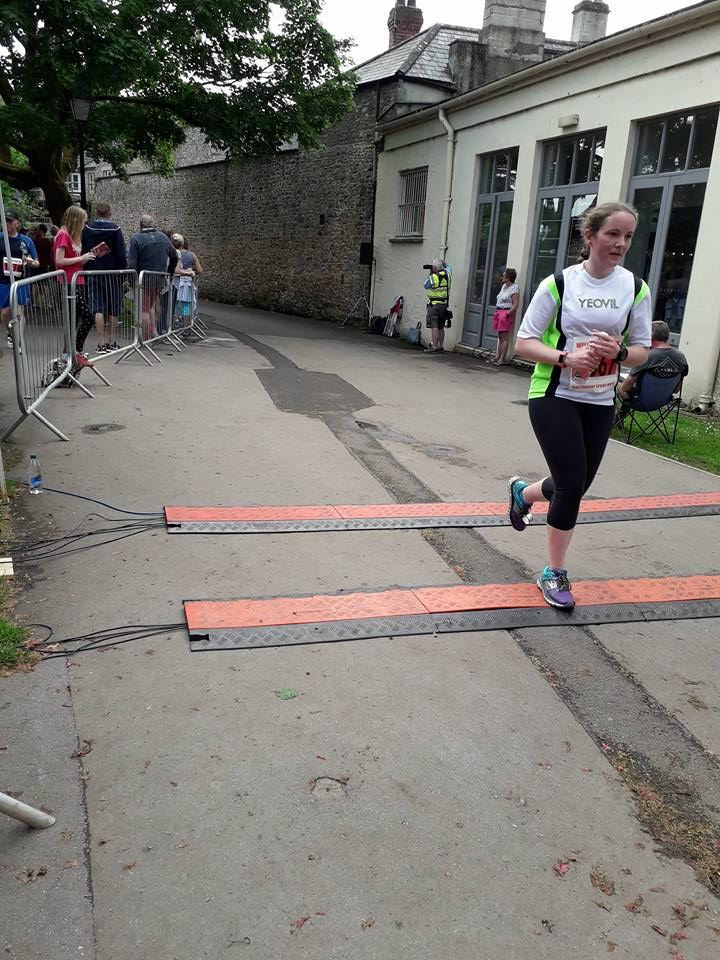 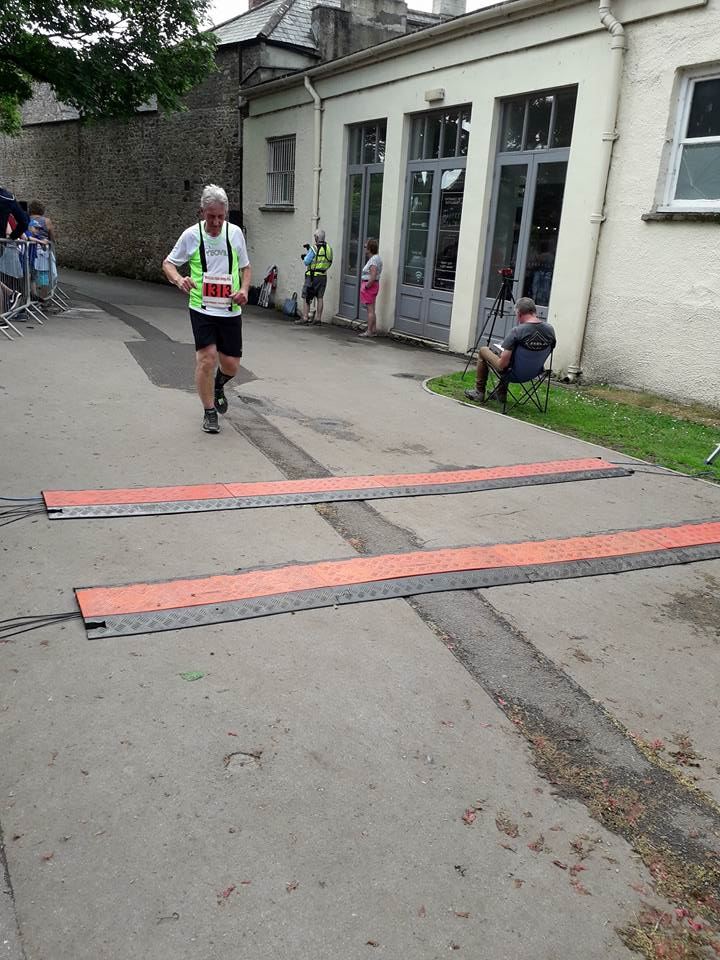 From Linda: Egdon Easy - Race Report. Well, I started packing a bag full of dry clothes, as I was not going to be caught out like last time, (Combe St Nicholas) with thunder and lightning predicted.
I was not going to be sat in soggy clothes all the way home again. Well, team, you can thank me for that, as the rain held off (mostly!).
I travelled to Weymouth with Claire Shucksmith and boy was it hot! We got to the venue and it was so muggy. With about 30 minutes to spare the clouds were beginning to thicken but it still didn't rain (we thought this was a blessing). Whilst studying who was attending the race and getting our calculators out, in came Mr & Mrs 50 points (Harriet Quast and Paul Card), 😉 so it was a battle for the next best place. (Not that I am competitive 😚 ). We all gathered outside before the race to wish Katie Brooks a happy birthday, where she was presented with more Happy Birthday bling to run with. We had no idea it was her birthday 😂.
I sorted out Steve Lye with one of my spare T-Shirts. A little bit short but it guaranteed him his well-earnt YTRRC points.
Claire Shucksmith was hoping to break her 10K cursed time of 1 hr 2 mins by going for a sub 60 mins. (bless her, she came in 1hr 4 min, hopefully she will break the curse at Martock).
Anyway, team photos were done and we got down to business.
Usually, this is a flat, fast course and a PB course but tonight it proved very difficult.
Every time you breathed in, it felt like your lungs were burning, as the air was just so hot. Every now and then, there was a nice breeze, then about 3/4 around the course, at about 8k point for me) it started to rain.
I was so relieved and couldn't wait for it to pour down....but no...just a few big droplets for about a minute and that was that!
So we all ran past the 8k marker and I was looking forward to seeing the last 9k marker, but it was either stolen or they forgot to put it out....such a cruel joke 😥
Anyway, the end was in sight... I crossed the line in under 55 minutes and was the 2nd YTRRC lady in. Well happy with that, but I don't even show on the results!!!!!!
I have queried this and hopefully, they will update this after the Dorchester Marathon.

Provisional link is below (me not included 😥)

Returned back to Yeovil and apparently had missed a lovely thunder and lightning storm. 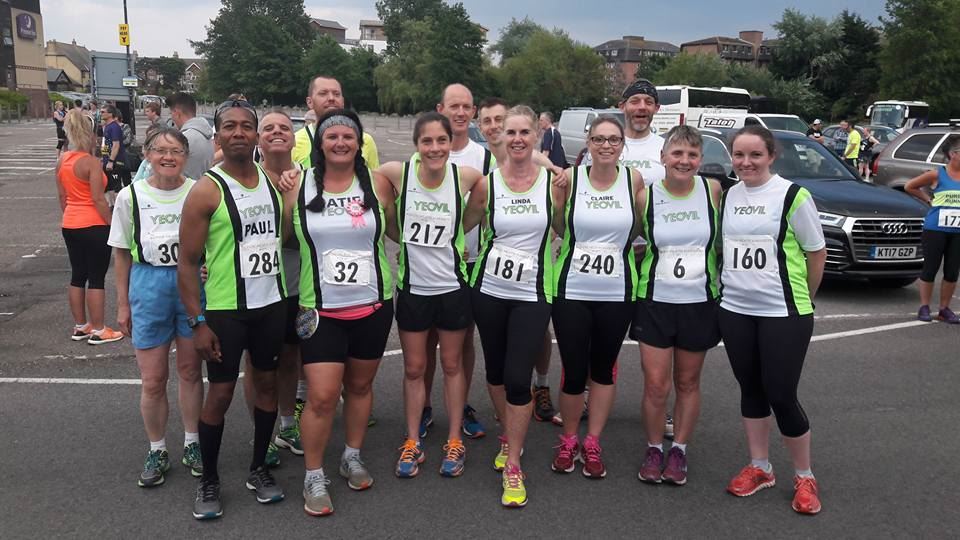 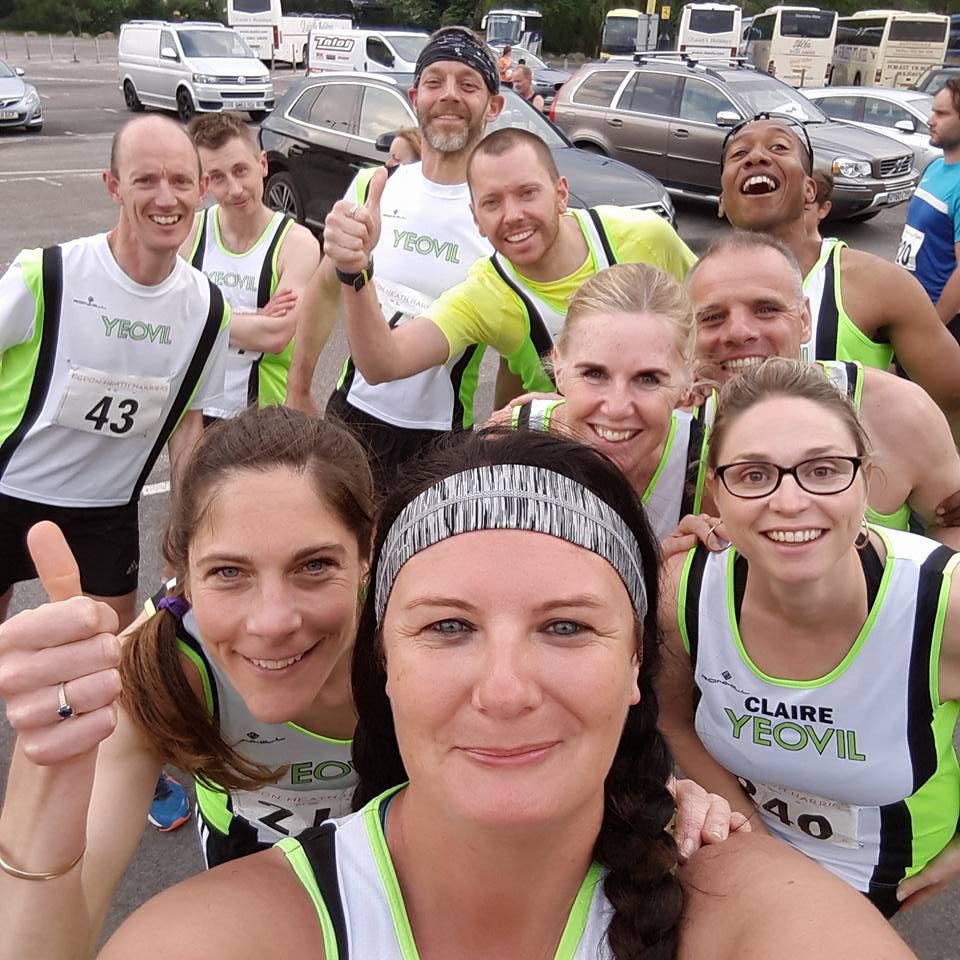 Montacute Park run had the normal Parkrun team with a couple of add-ins. I didn't get a mention or a T-Shirt for completing 3 yes 3 parkruns in 4 years. Well done all don't forget next week is in Club Vest's. 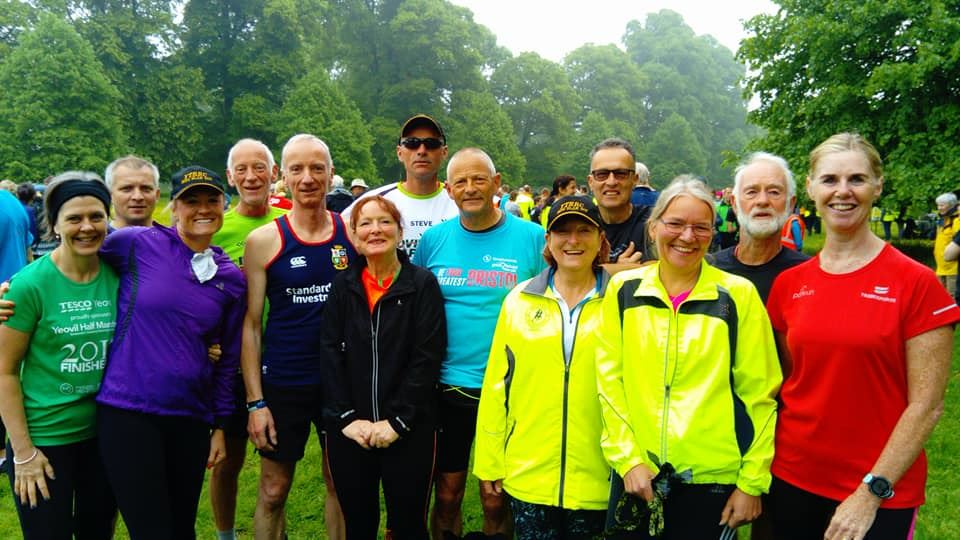 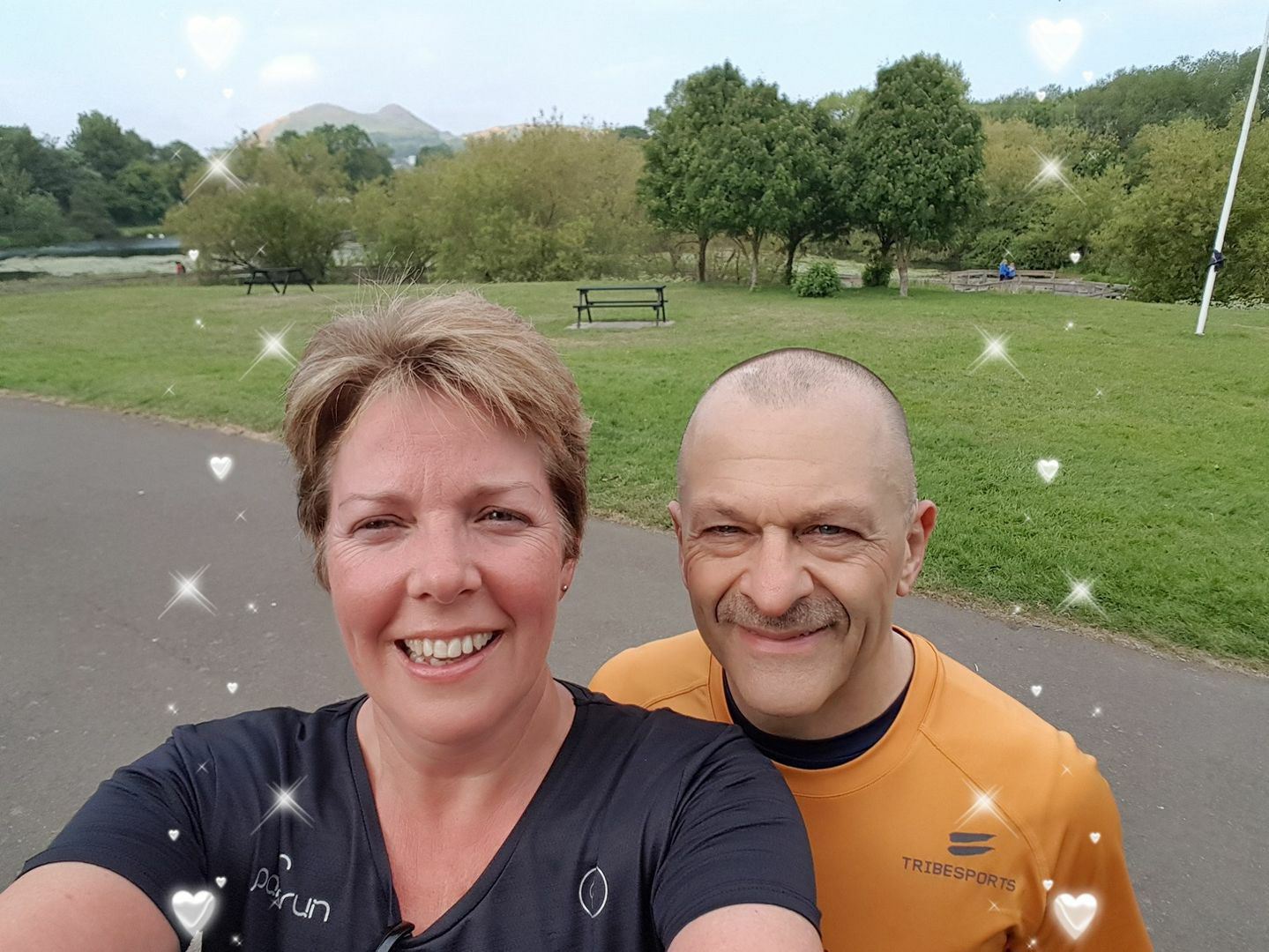 PUB RUN – WADEFORD (24th May 2018)
Tonight’s pub run was organised by Nikki and Simon who also led. After days of sunshine we were back to poor visibility with light drizzle at times. The run was a delightful mix of fields, paths, tracks and lanes, undulating in a clockwise loop. Flowers were out in all colours (white, blue, pink, and yellow), and so were some big birds. From the pub we ran down the back of Wadeford, and set off across fields. At Coombe St Nicholas we ran up a grassy path to fields and crossed a grassy hill top (Stony Down). We ran eastwards down a lane and turned right. We turned left off the road to run down fields. Next we entered a nature reserve. The path followed a stream, and came to a group of really picturesque stone Mill buildings. We followed the lane eastwards and reached the main road where the hotel is. On reaching a wooden 5-bar gate our way was temporarily blocked by a male peacock, perched on top of the gate. We got him back into the field and he walked with us for a while. We crossed wet grassy fields and ploughed fields, and picked up a series of muddy paths. At Nimmer, we ran along a lane, then turned right for more muddy paths. Three Guinea Fowls ran with us, and had to be turned round. We then entered a yard with large white Geese. The path followed a stream, where Simon and Nikki had found a dead grass snake the night before. Unfortunately the snake had gone, so we just ran back to the pub. A great pub run of just over six miles.