Yeovil Marathon and Heron Half 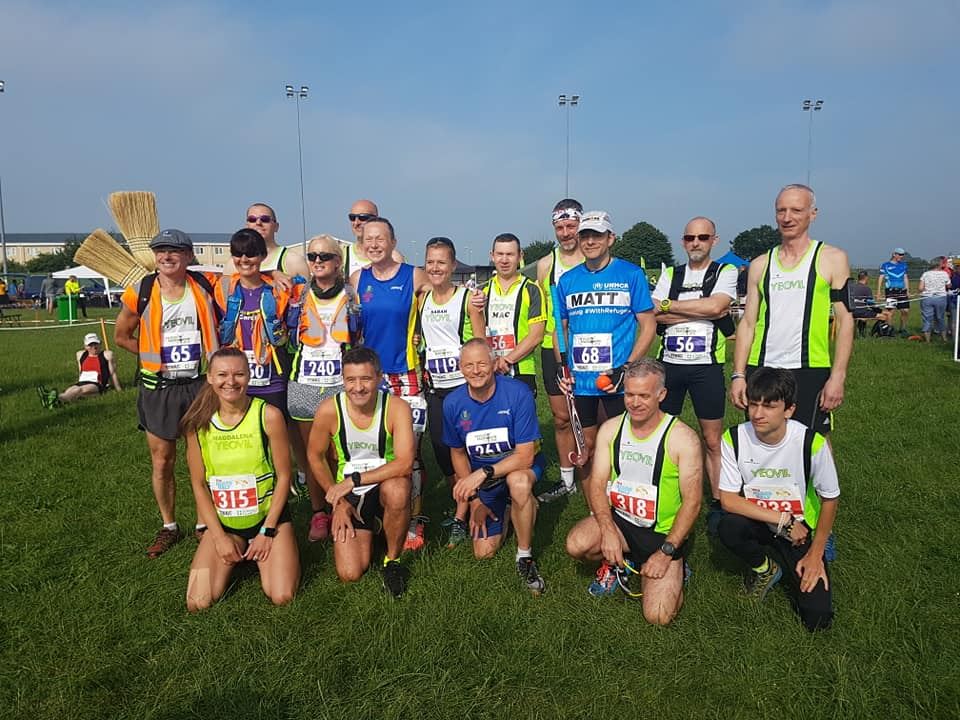 Well, yet another great organised and well supported day of races, a massive congratulations to Bryn and the team for an excellent day.

It was an early start to get the last bits done after the push on Saturday afternoon. 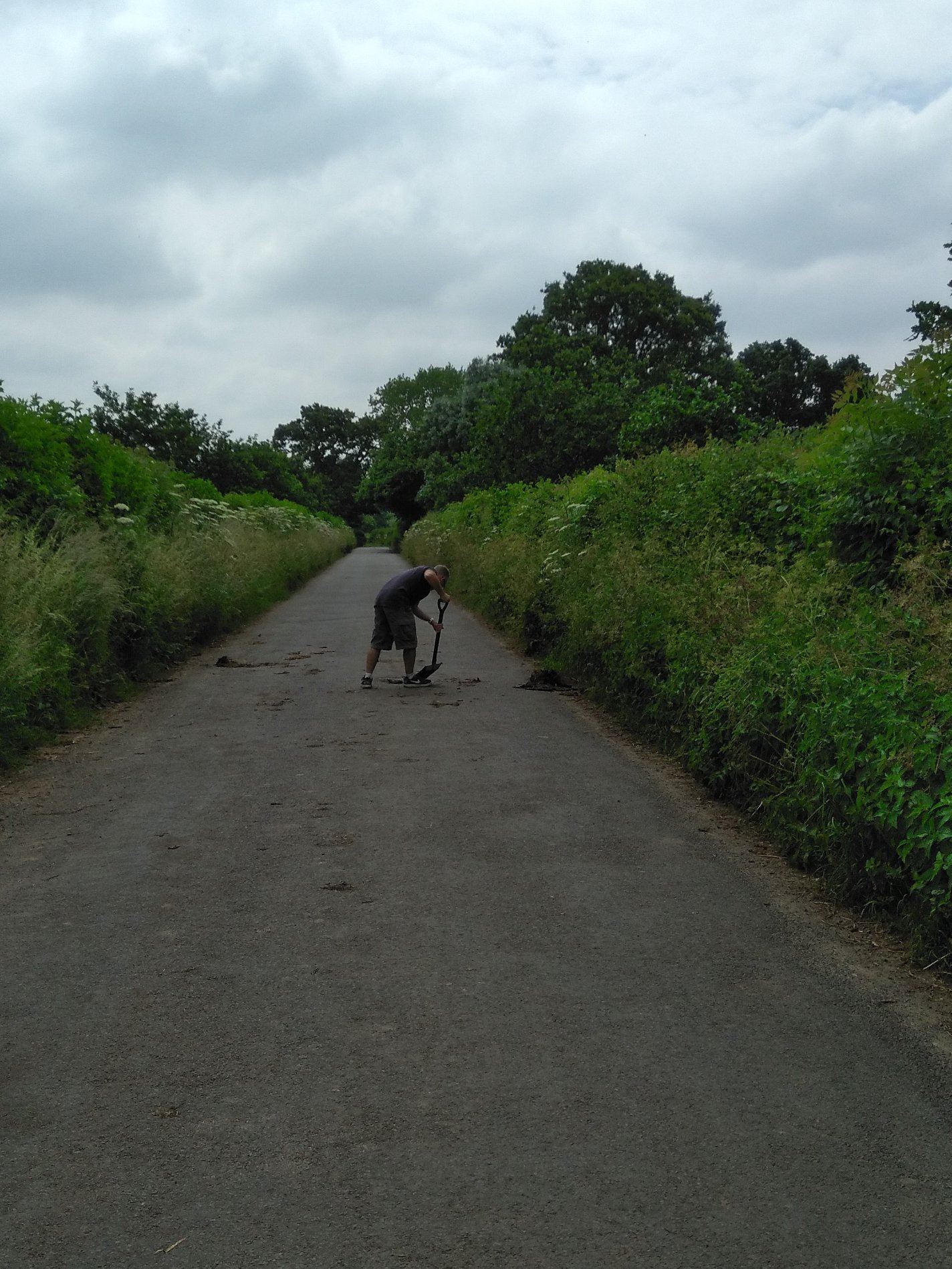 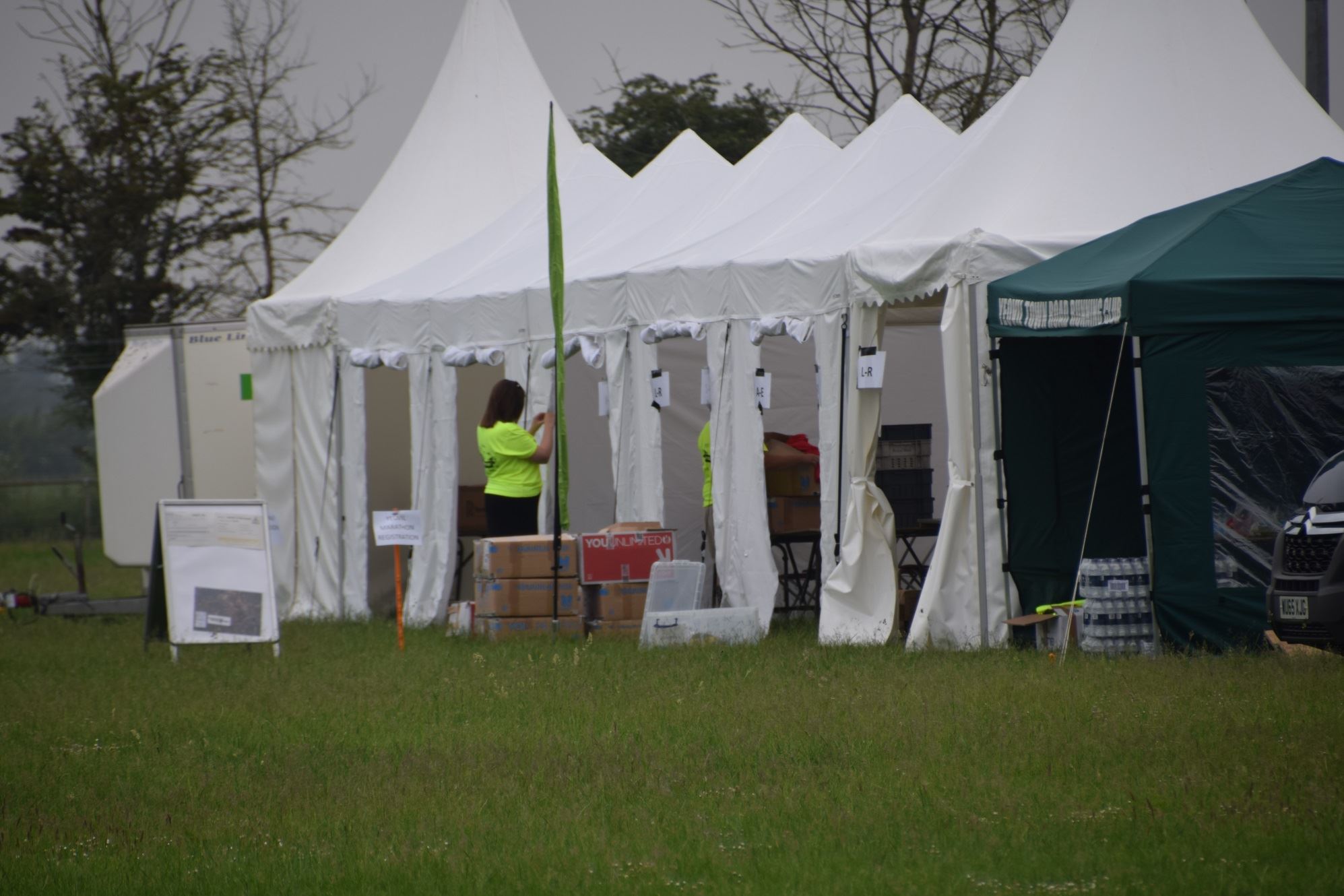 Soon the runners turn up with the Marathon starting at 9 and the Half at 10. 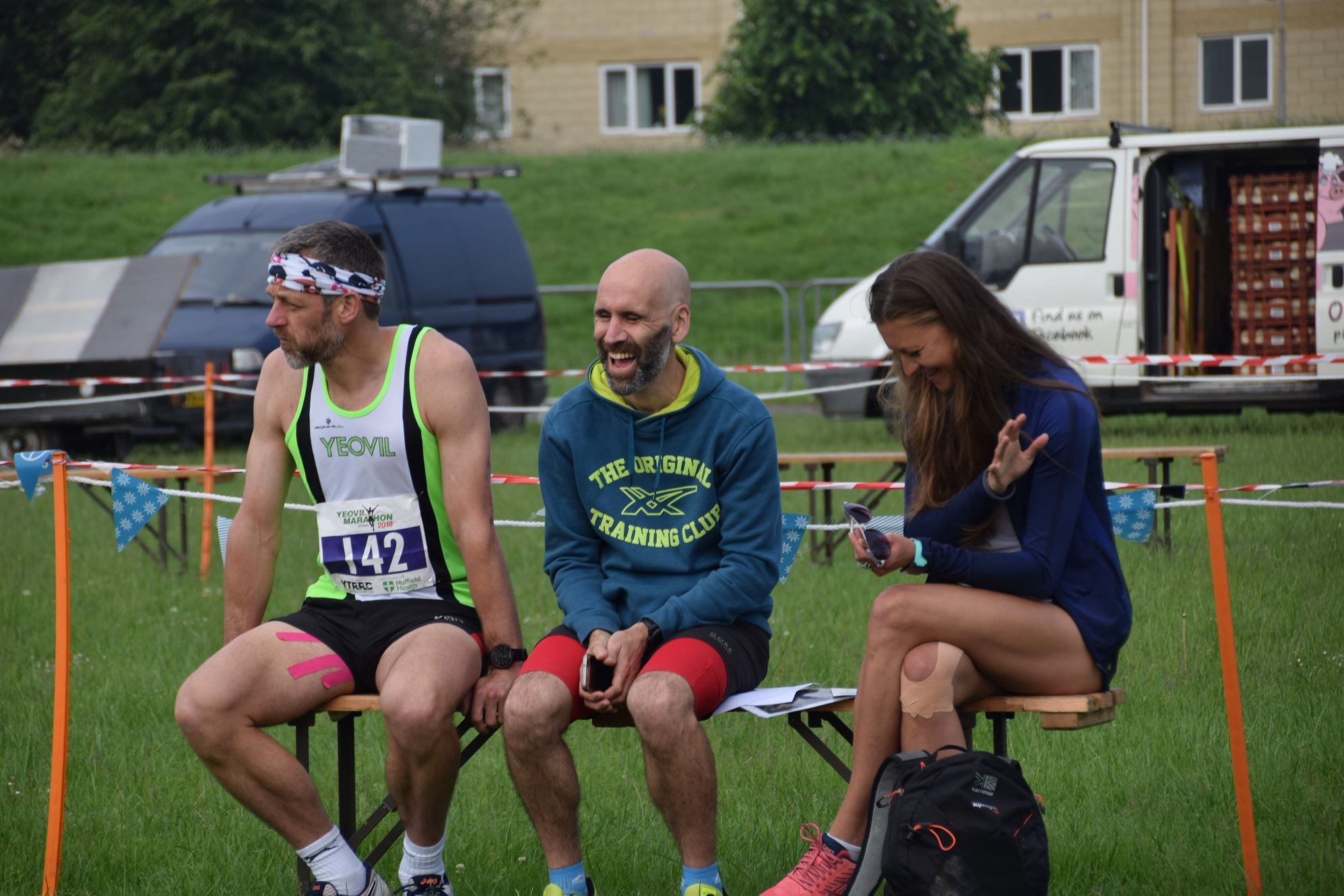 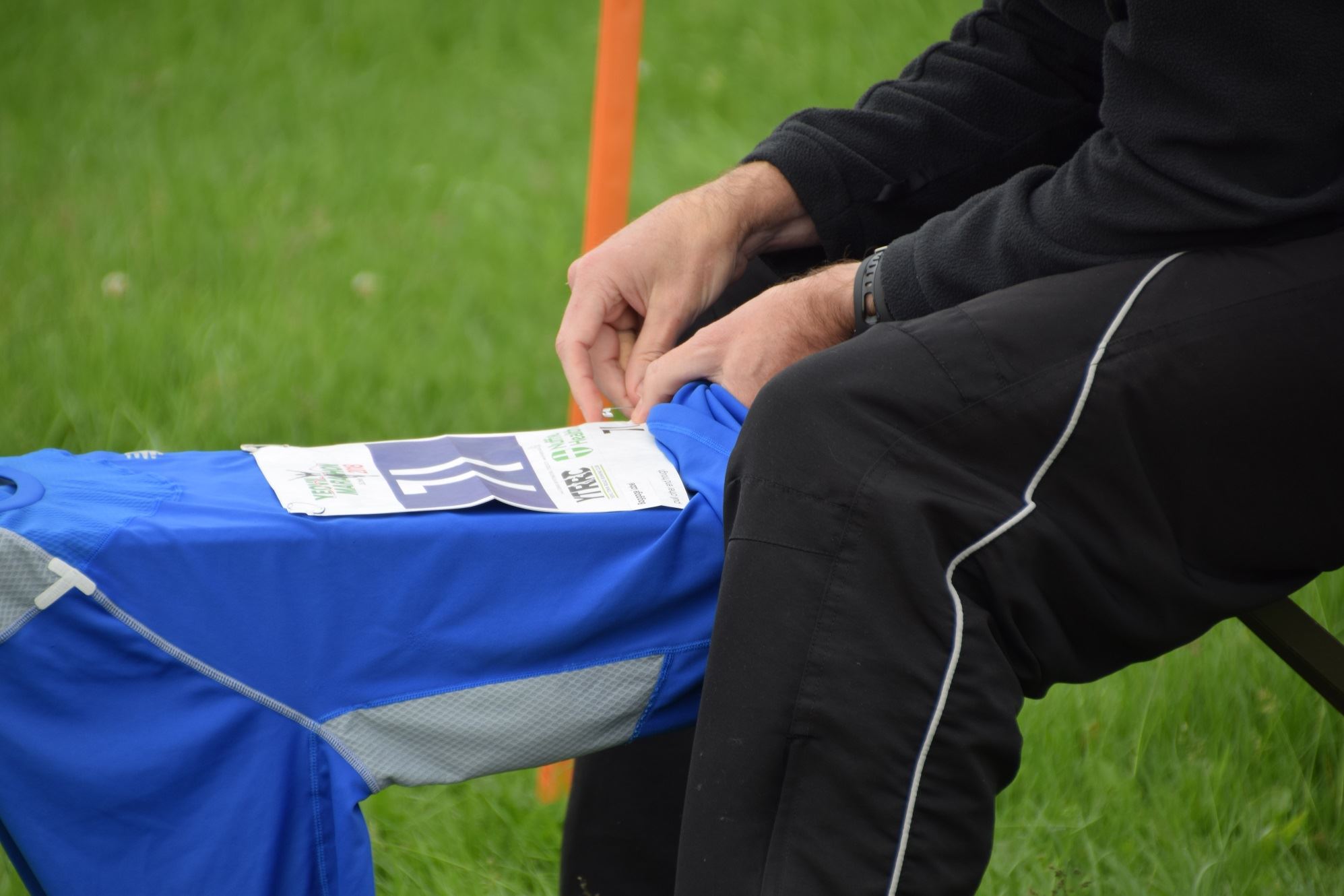 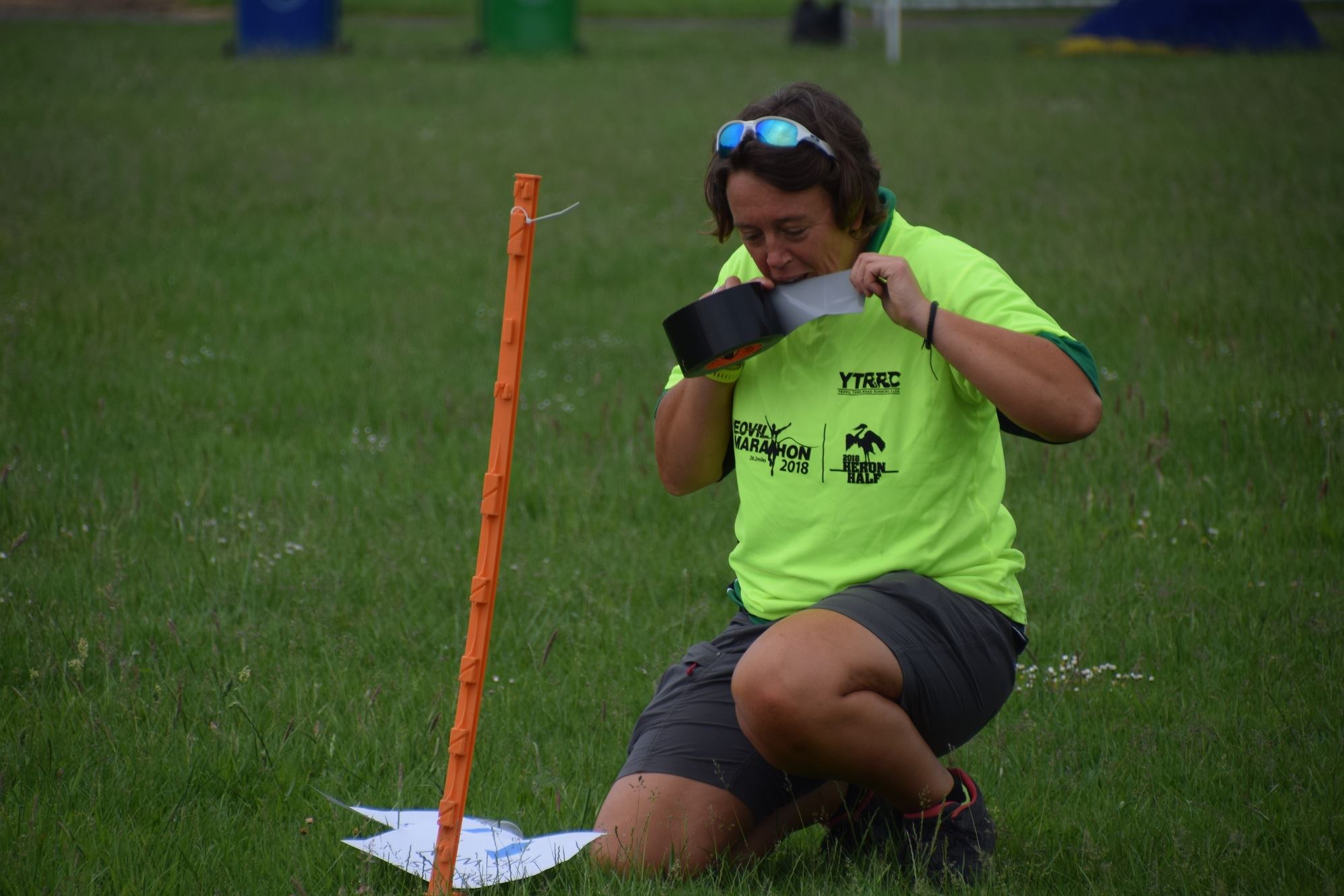 Bryn briefed the Marshalls before they set off to their posts and had a bacon butty. 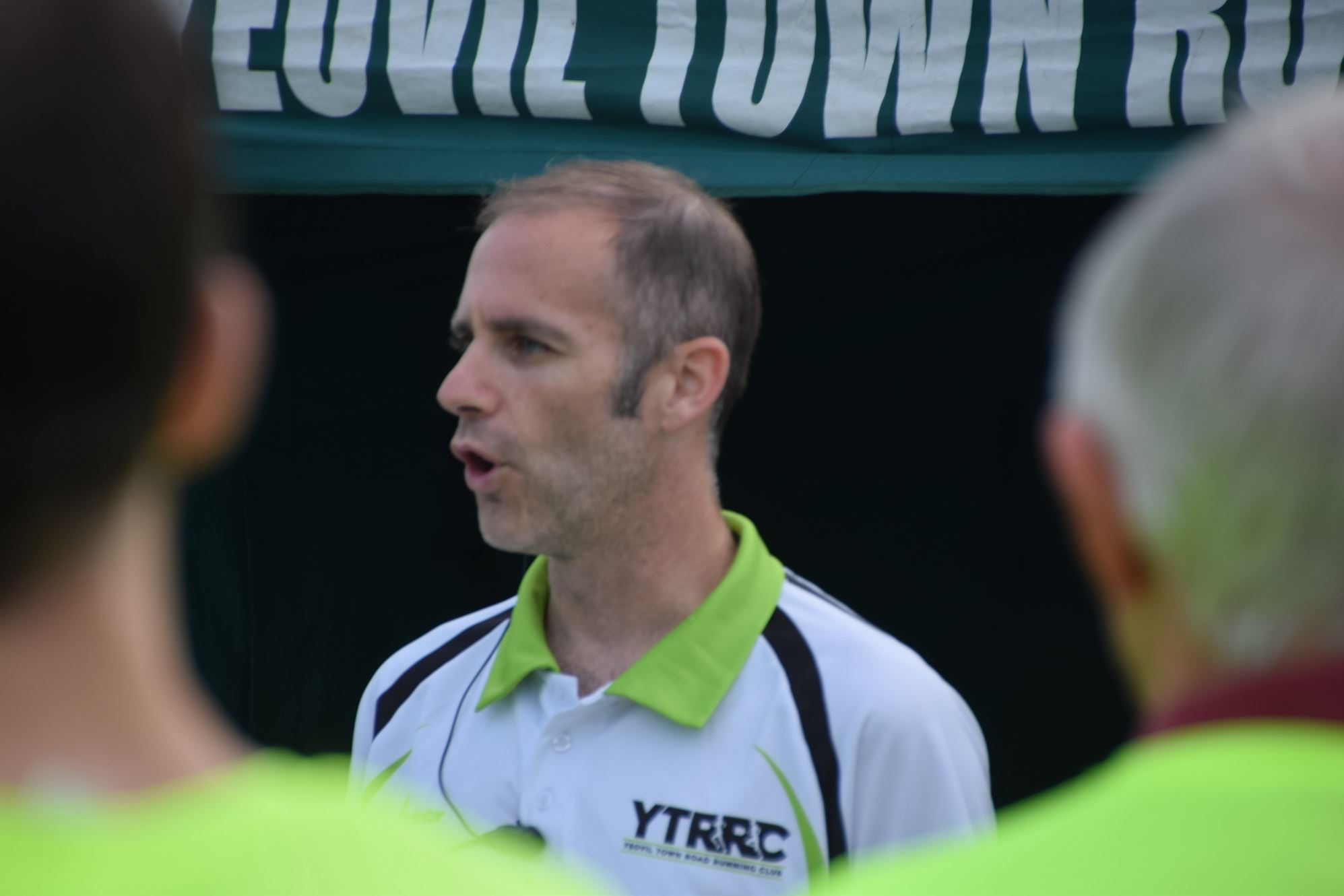 Handing out the numbers and telling them to go away we had Anita, just don't mess with her. 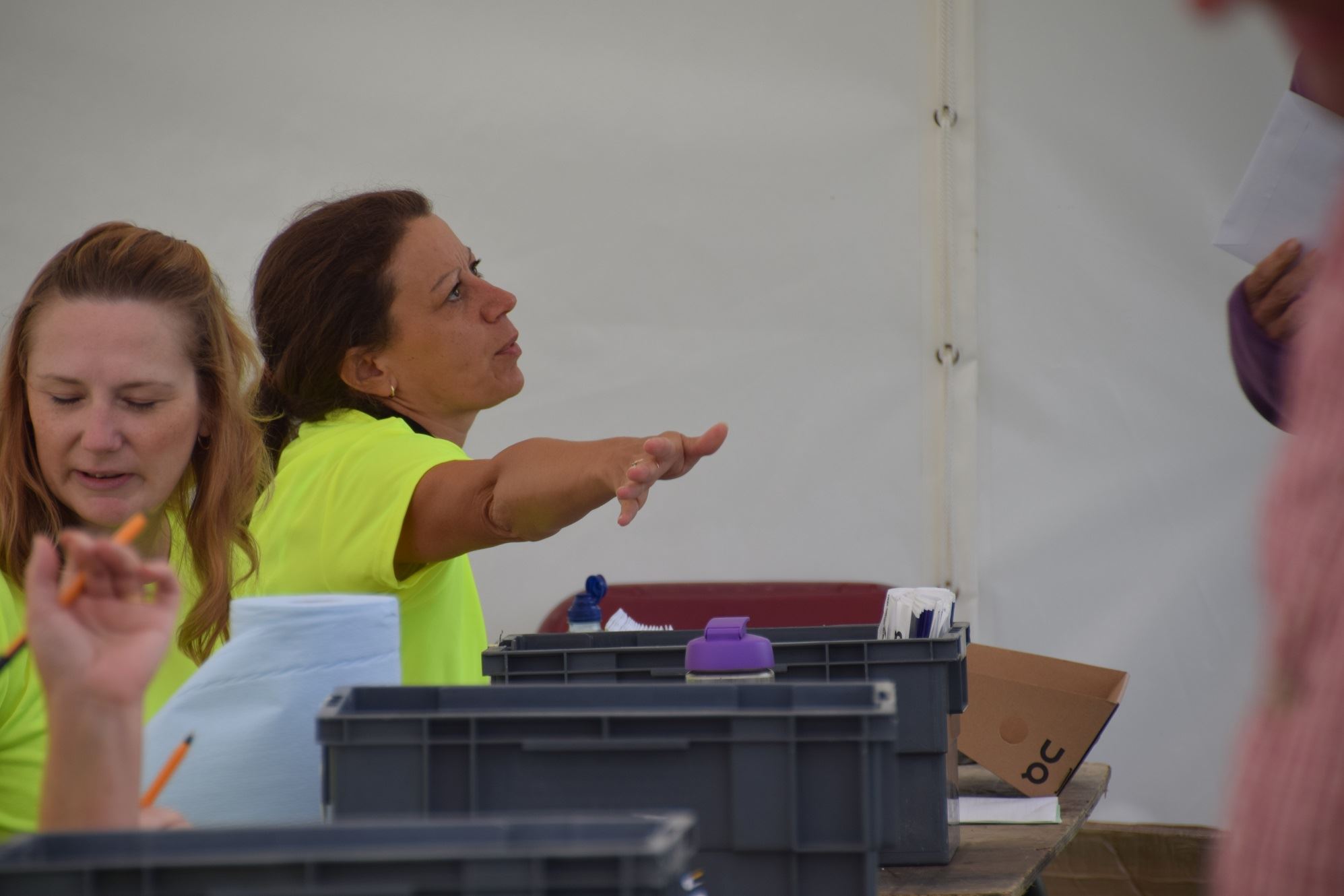 Matt Driver did an excellent job in going for the World Record whilst using a Hockey Stick and a shiny ball, with a time of 4:11 we will have to wait and see. I passed him just over the halfway point and was impressed with his ball control, doing this for 26.2 miles, all I can say is what a great effort and hope it comes off. Well done Matt. Clip  from Kimberley 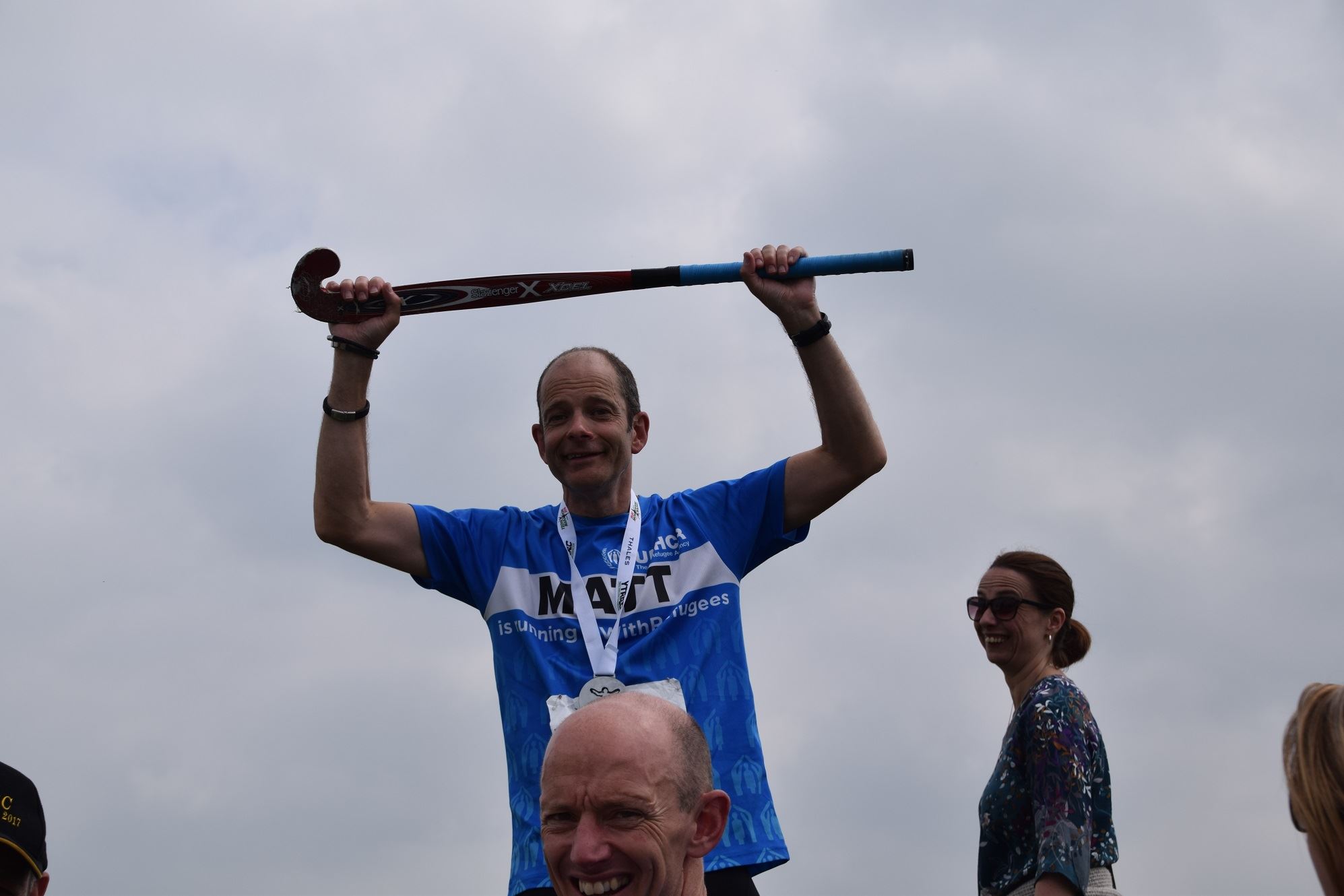 In the Full, we had Kev Brettle first over the line for the Club 3:14 and Harriet Quast our first lady in a time of 3:45, well done both of you.

The last of the Marathon runners crossed the line. 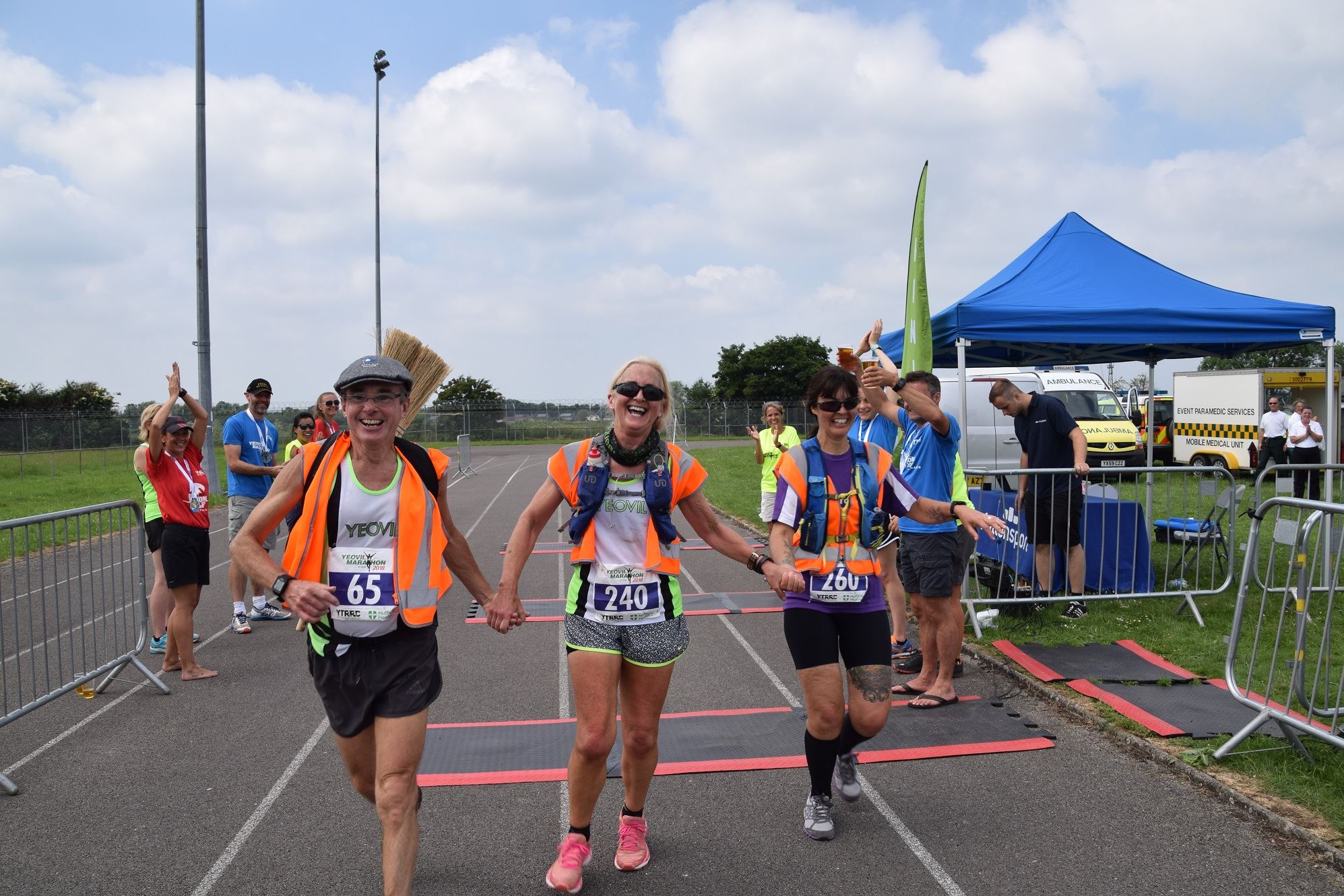 The Marathon was also in the Somerset Championship and there were a few surprises when Bryn called out the winners for the ladies with Harriet and Sarah won a couple of prizes. Sadly Harriet's has to be packed away and sent to the loft. 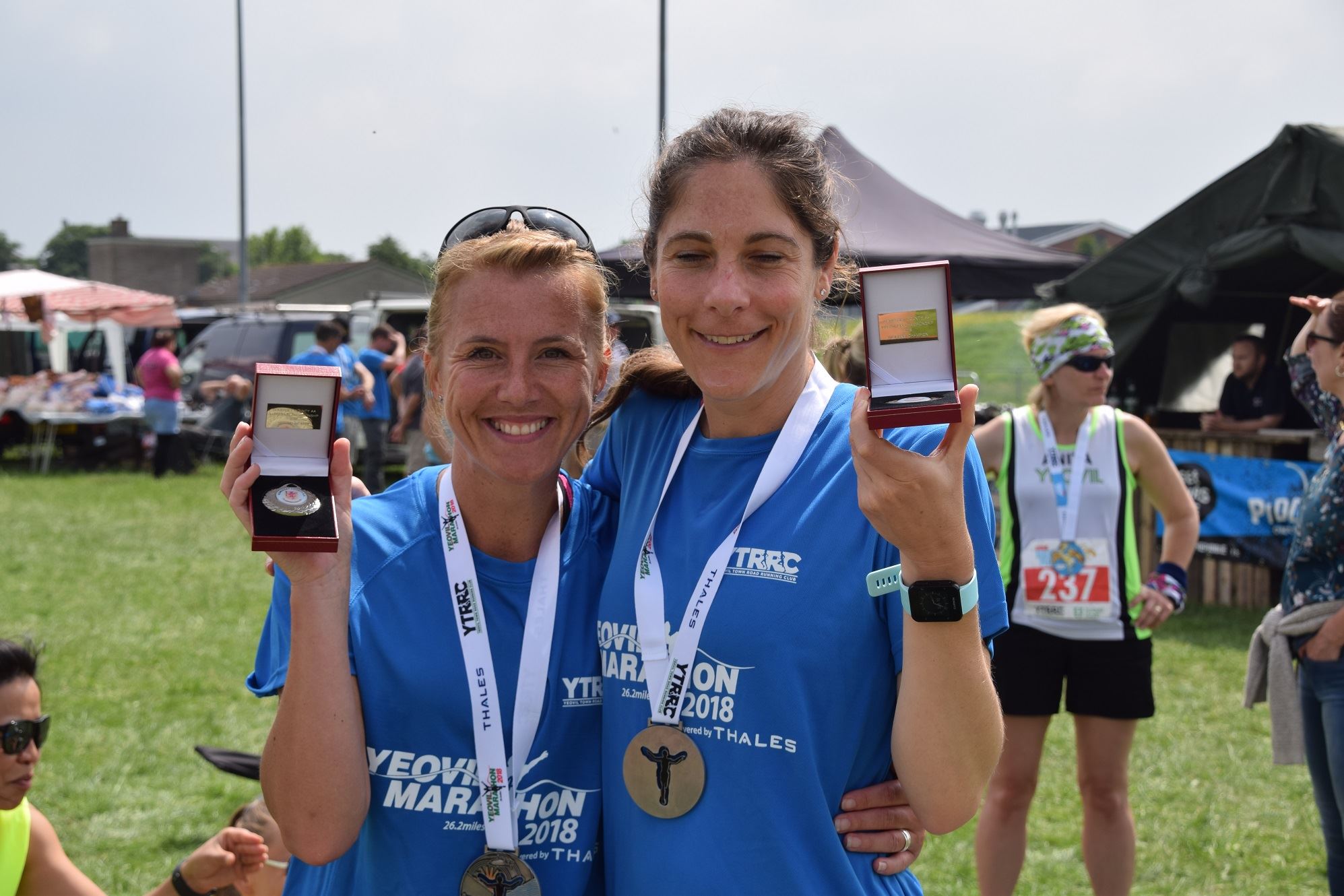 Steph managed to knock 35 minutes of her Marathon time and got a sub 4. 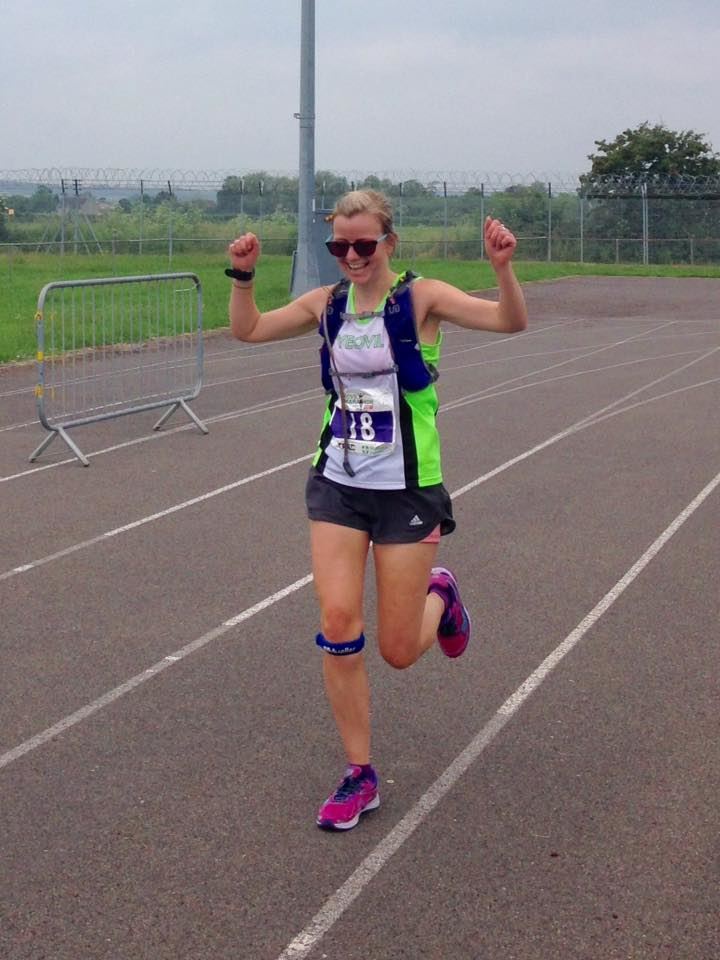 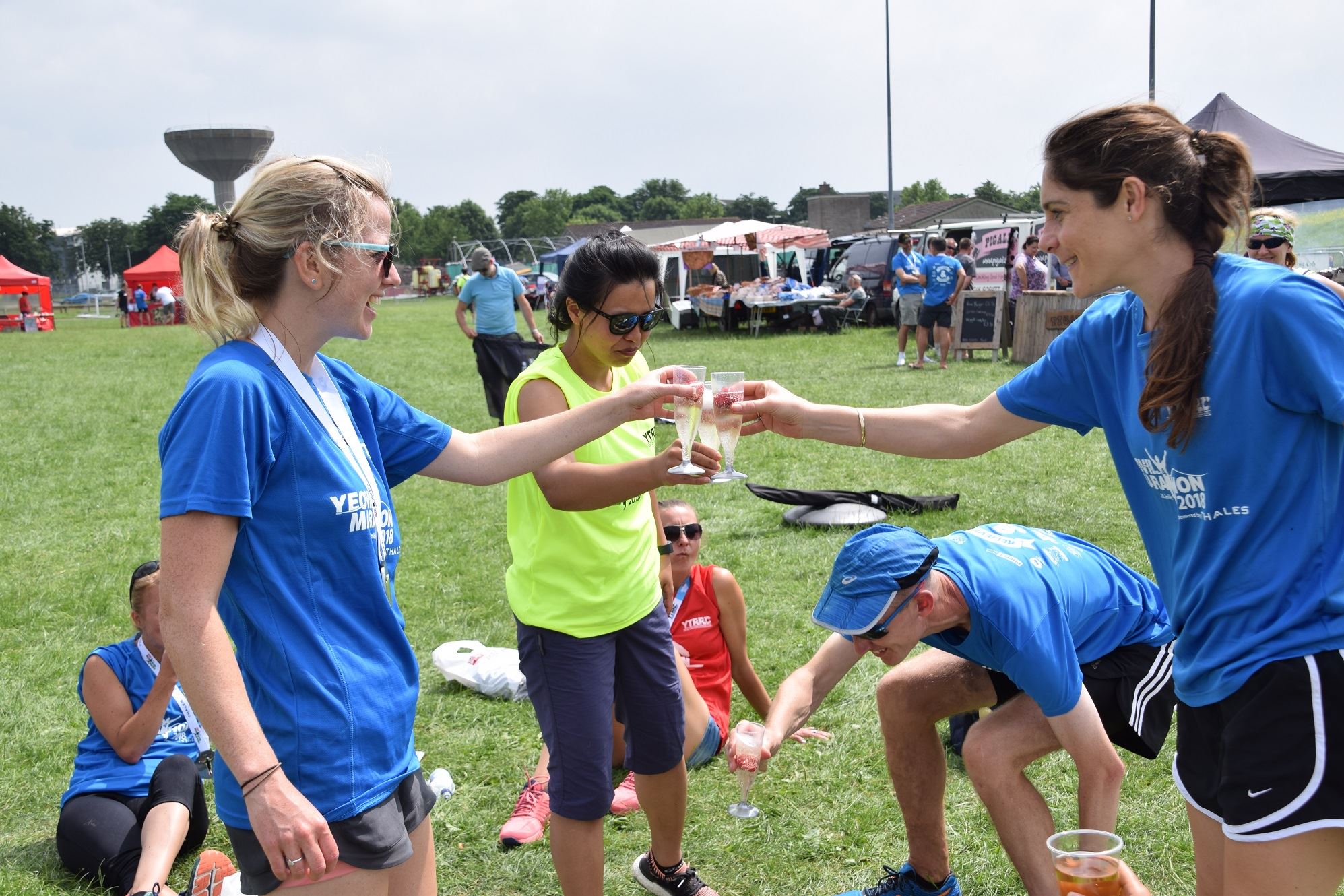 In the Heron Half, we had Ed Gibbs first over the line in 1:29 and the first lady was Anita Garrett in 1:57, well done both of you. 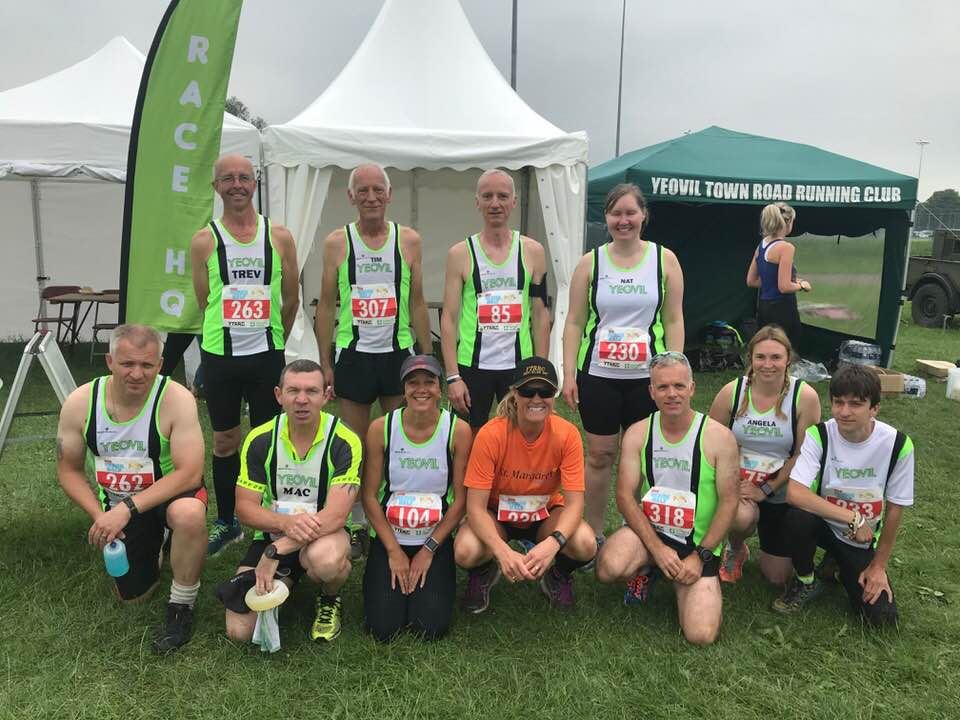 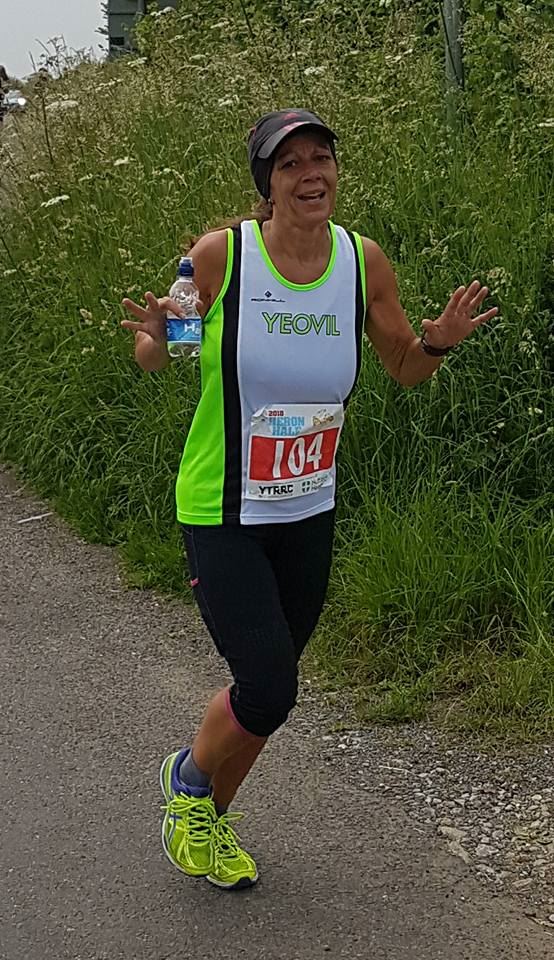 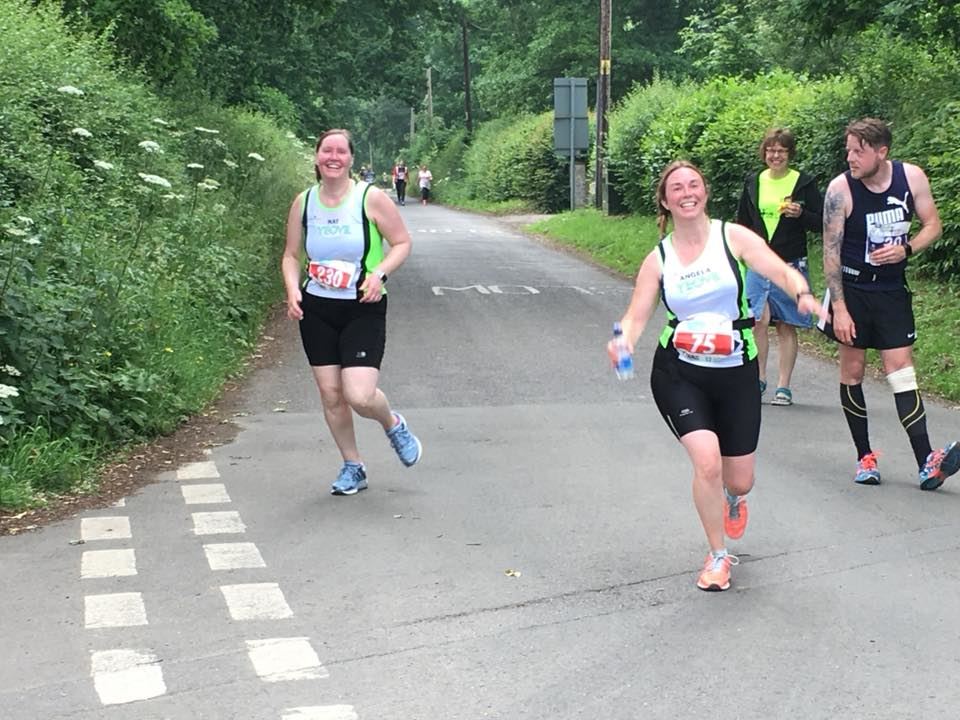 We had 273 in the Half and 218 in the Full so we had loads of no-shows, a few opted to go from the Full to the half at the end of the first loop as it did get a bit warm in places. The feedback and comments so far just shows what a great job all the helpers did today. You did a great job with your encouragement.

From our new Ladies Captain aka   Steph:  CALLING ALL LADIES: Wednesday 27th at 7 pm is Forde Abbey Cross Country 10k - I think we’d be in for a great chance at winning the team race.

We are back at Yeovilton this week so please helpers and marshals needed.

Well done to Lindsay and also Ali who completed their 50th Park Run this weekend at Montacute, a good turn out for the Club as well. It was also celebrating 70 years of the NHS.

From Lindsay:  After spending hours putting signs out for Yeovil marathon and heron half this afternoon I asked myself 'why do I like running so much' mmmm several things came to me. 1. Mainly because it stops my brain working overtime thinking of things that really shouldn't bother me but actually affect my everyday feeling on life. I can concentrate And even have to dig deep to get to my running goal and at least feel happy with my achievements 2. With obesity and diabetes in my family it's my way of keeping fit And staying in some control of my weight and 3. Members of my club are like my 2nd family And best friends and we are working towards the same challenges, and know how hard and rewarding running can be. Hitting my 50th park run this morning felt extremely good. I actually think thy are all very important things that keep my head level and hopefully keep me smiling :-) thanks to everyone for being part of the above xx 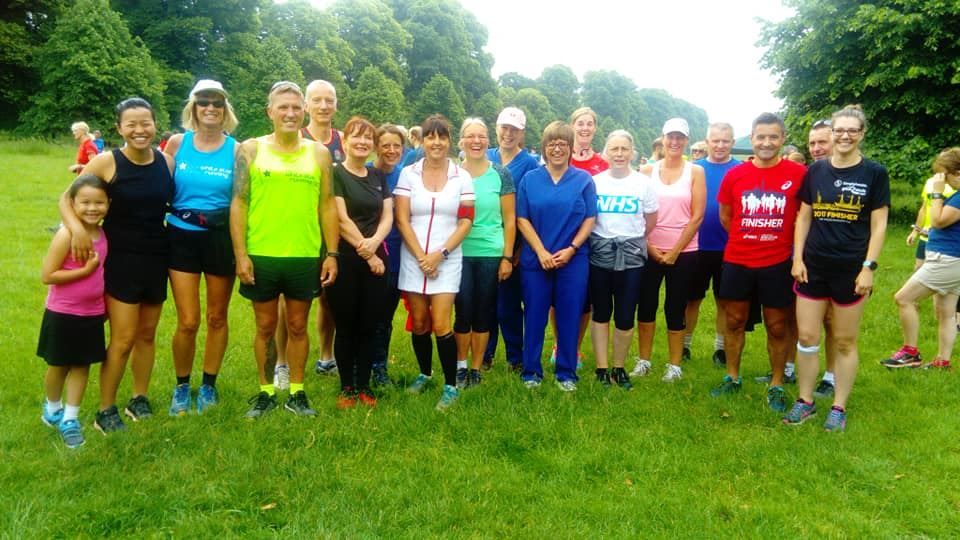 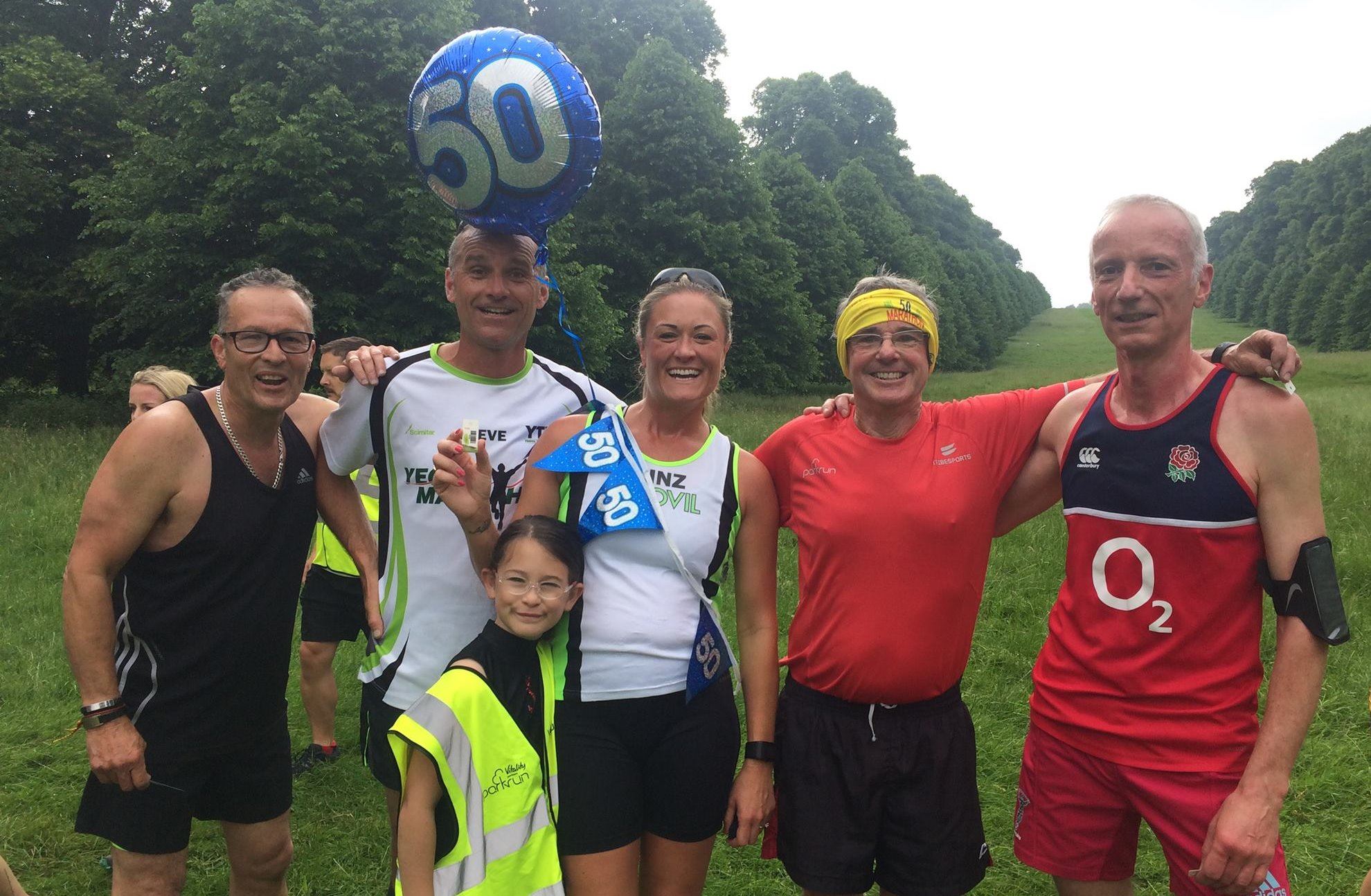 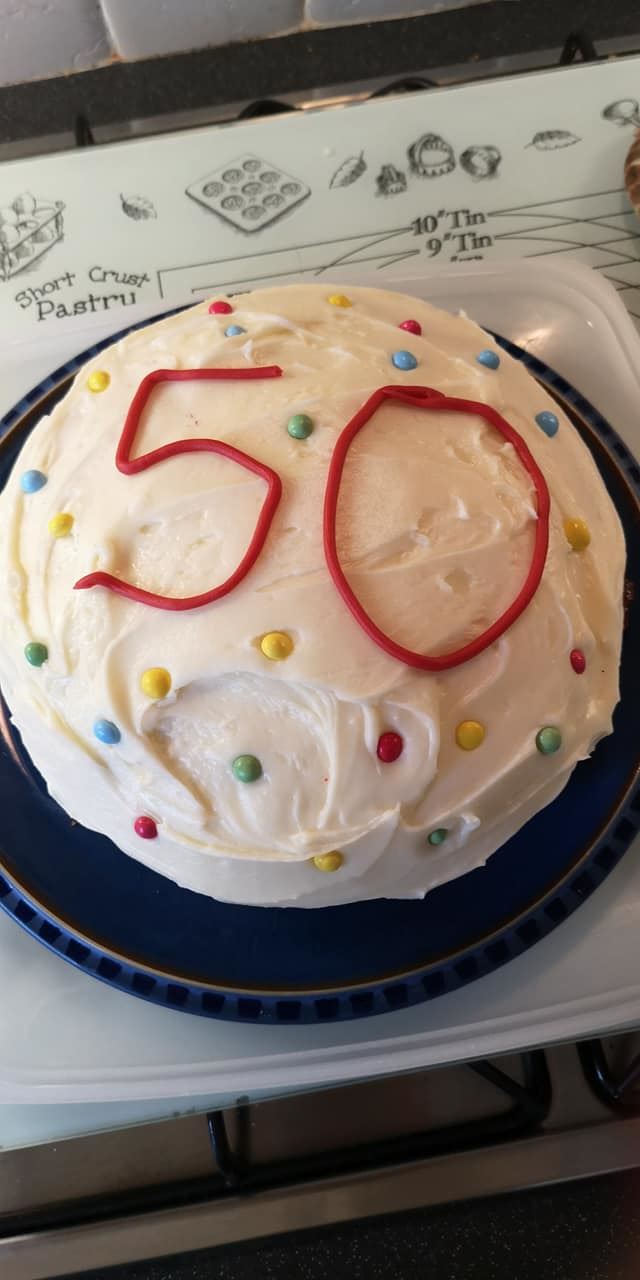 Saturday saw the running of the Explorer Marathon, there were two YTRRC runners, Darren Atyeo and me, this will probably never happen again as the Medal cost £125 to produce and the race was £55 to enter with Running Imp picking up the cost of the difference just to show what they can do and it is the biggest medal ever given out at a marathon.

The race started at 8:30 due to the fact that there was another marathon later that day/evening and Darren was running in that as well, must be mad. Luckily the weather was cool to start but did get hotter however not as bad as Dorch or NDVM, can't believe we're moaning about the weather...

Before the race, there was a photograph and presentation of a World Record of twins running 60 marathons in the same race but not always together, so if we have any twins in the Club...hopefully tomorrow Matt Driver will be getting one of these, it does take a few months after the event to get the Certificate. 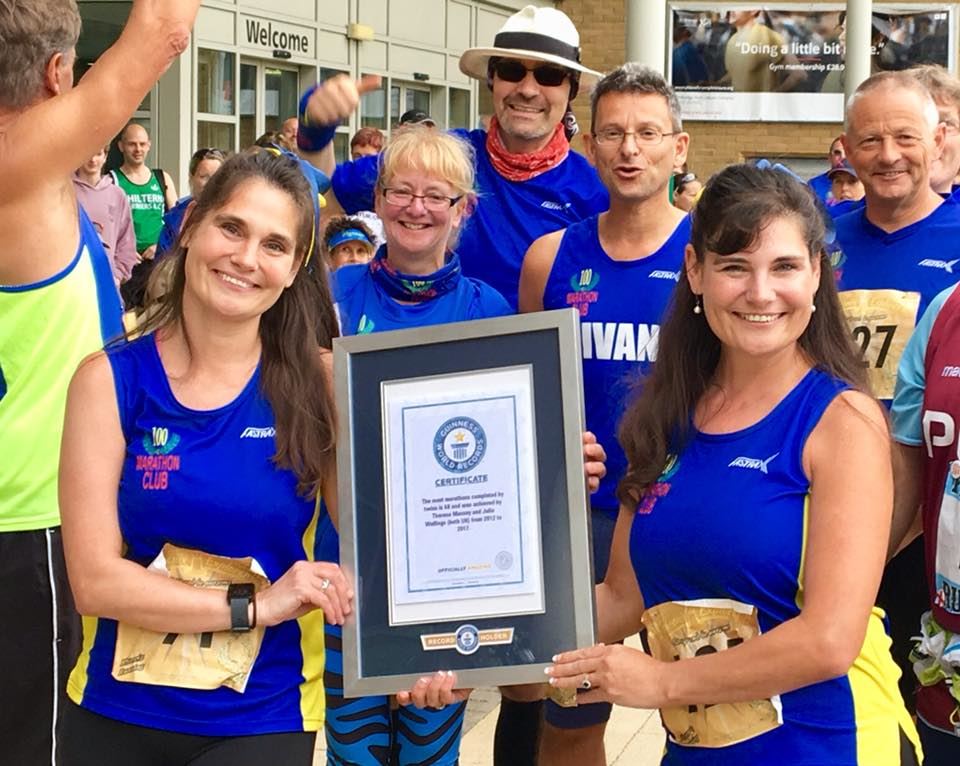 I managed to be the first Club runner over the line in 10th place with Darren not far behind, just in case you have not seen the medal... 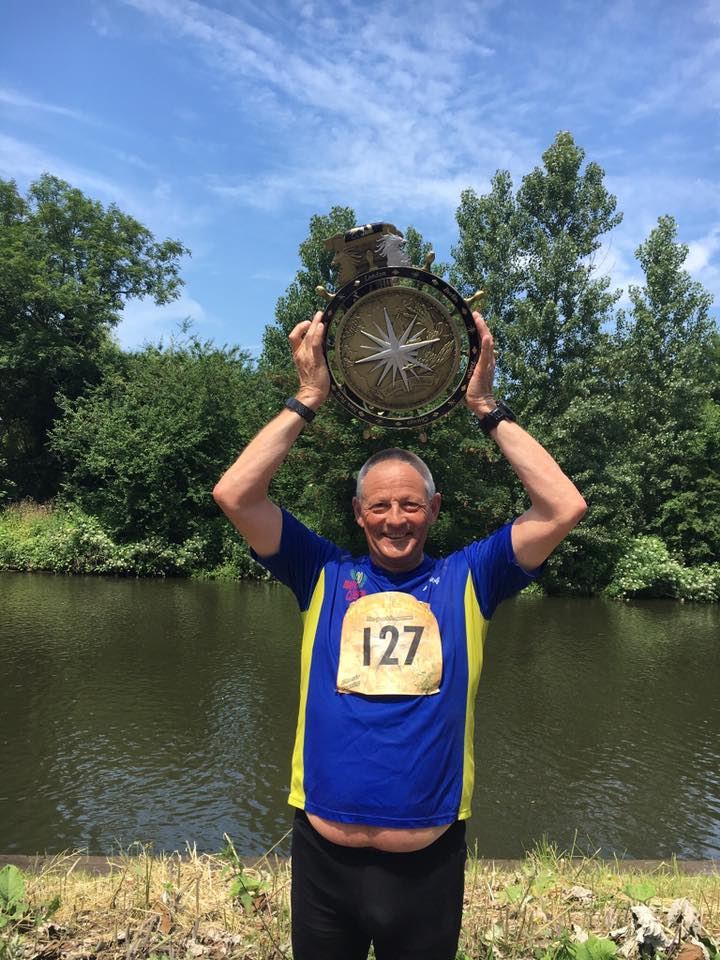 My shirt has shrunk a bit

PUB RUN – SHEPTON BEAUCHAMP (7th June 2018)
Simon and Nikki led tonight’s pub run. The group set off eastwards and ran paths round the north of the village passing through the football field before coming back out onto the road. We turned down Greenway Lane, then Marsh Lane. We turned off right to run down muddy paths. A field took us to Barrington Court where we stopped for a photo shoot. This was quickly cancelled as half the group ran away because of approaching cows. A little later we regrouped in safety in front of a large gate to have the photo shoot. We continued running down lanes and stopped at Thong Dairy (named because the dairymaids like to wear thongs). We continued to run along the lane, then turned off right to run across several fields. There were some big cows with small calves. It was noted that one of the cows had a huge udder. We came out at a very rutted (muddy in places) drove or green lane. We ran along the drove. There were loads of horse flies. We reached a Ford with a wooden footbridge. Someone got bogged down in the mud while most of us used the bridge. We then reached a lane which eventually took us back to Marsh Lane. We continued to run along the lane which became a long climb before reaching the village and pub. The total distance tonight was 7.2 miles. Thanks all. 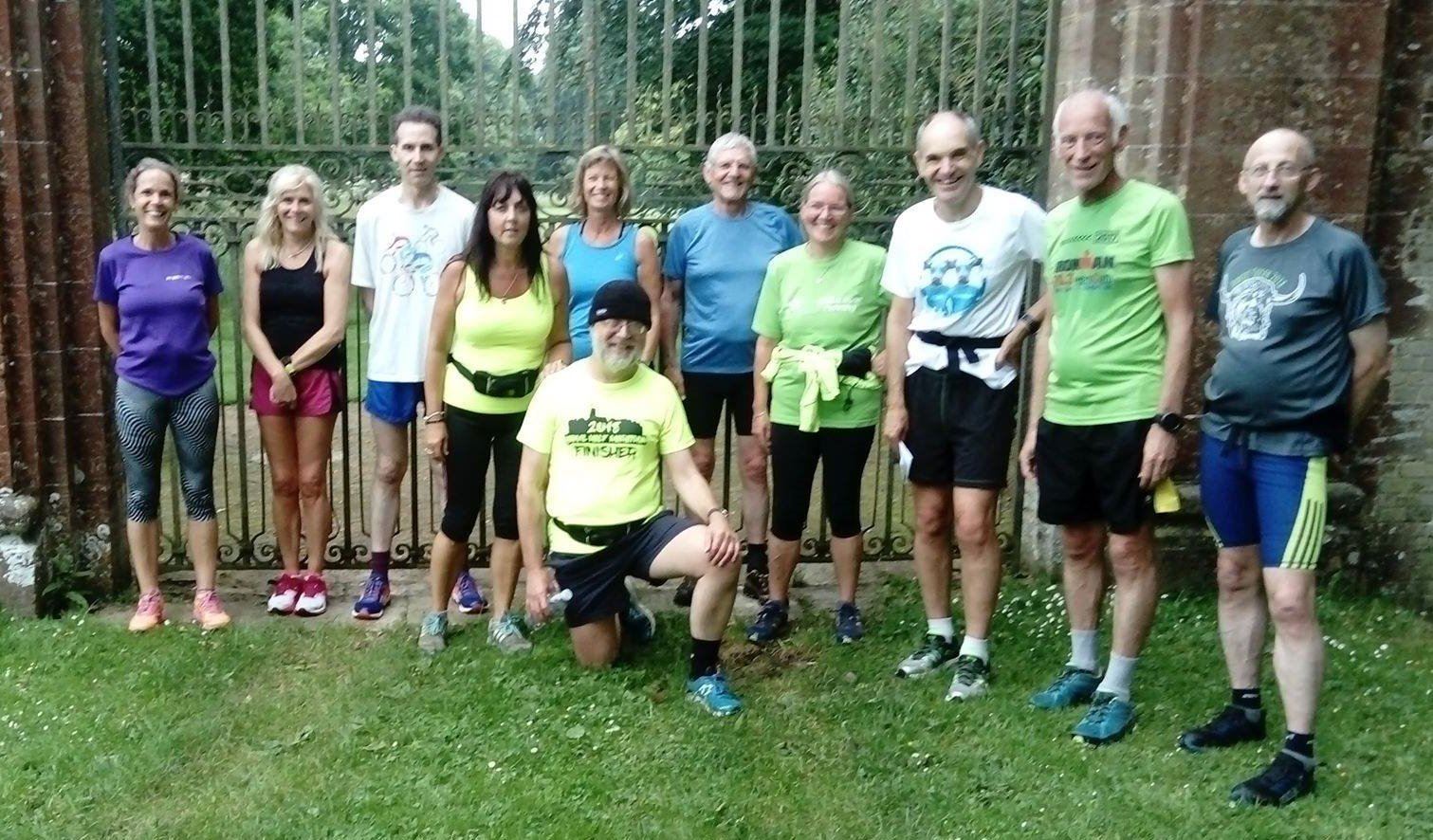 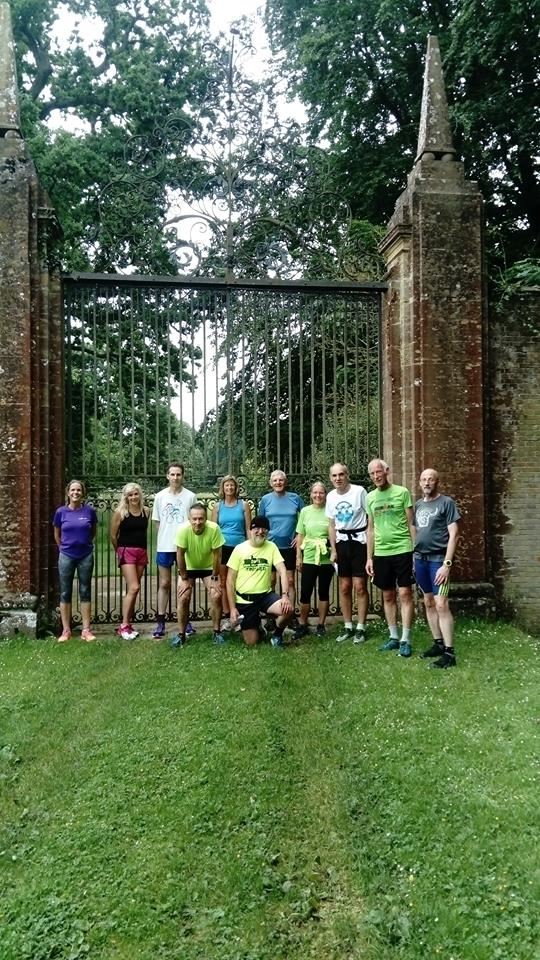 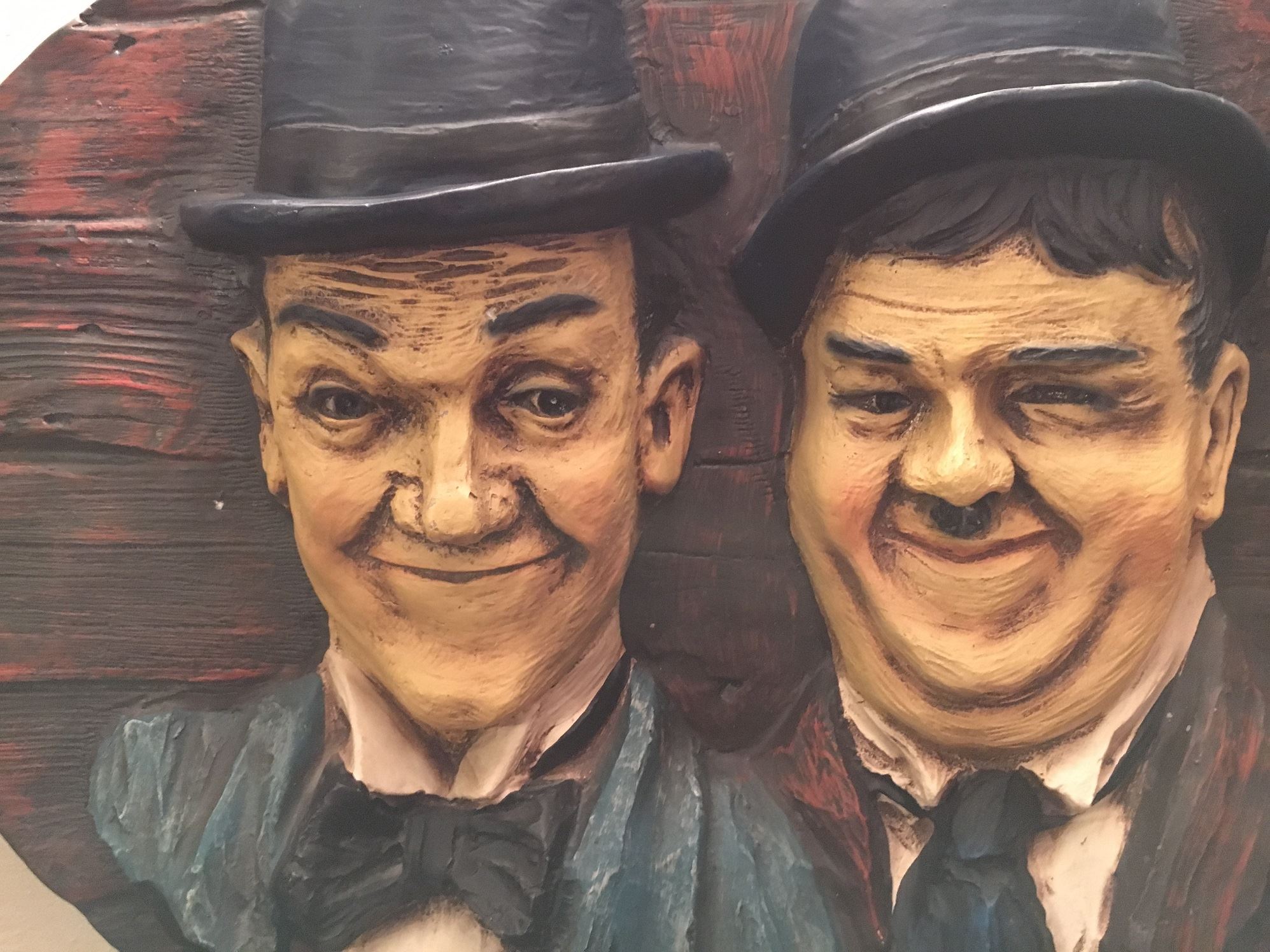 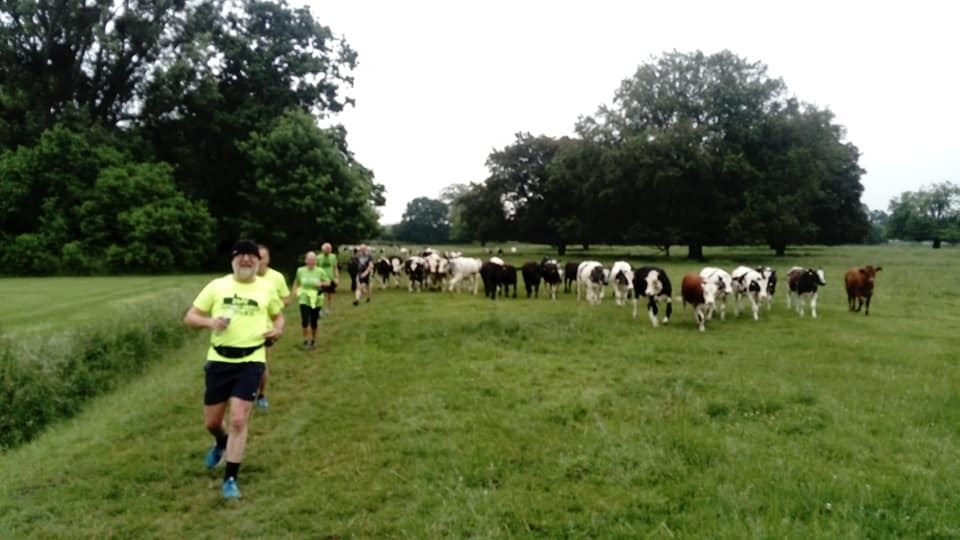