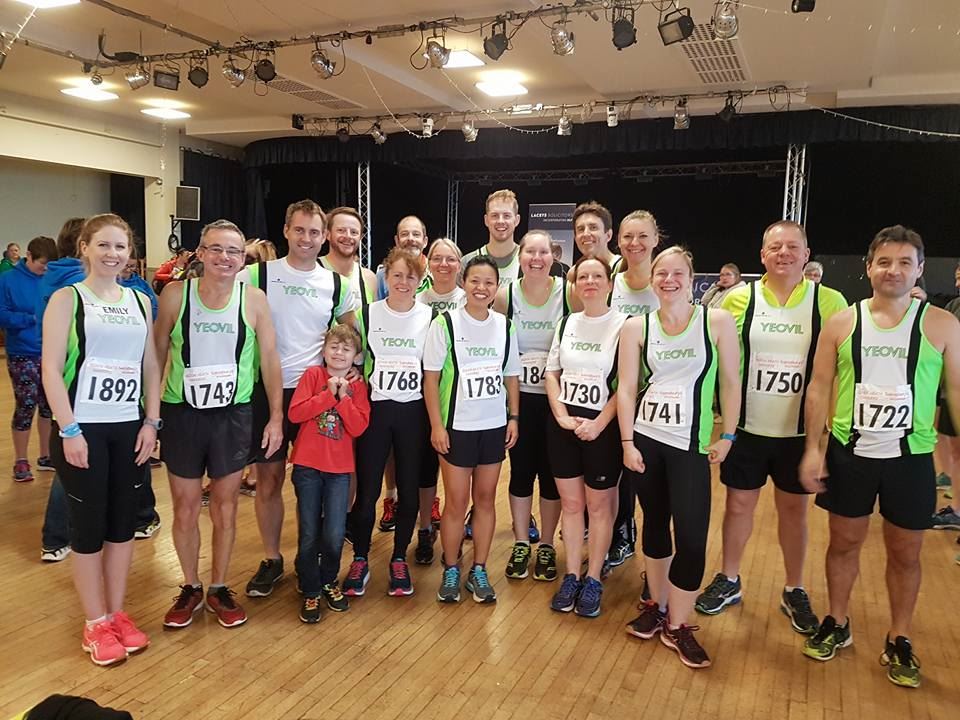 Although this was on last year with a few Green and Whites running last year sadly there was only a few of us today, on a revised course and better medal with a 5k, 10k, Half and Full there is something for every one. A great local race in Burton Bradstock with one loop for the Half and two for the full. We had Paul Allen, Chris Woodman, Luke and JC running the Marathon. Gorgina Brice was down to run as well but I did not see her. We also had Catherine who took part in the Egg and Spoon Rcae and came close to the front but we are not sure if the Egg was Vegan and are awaitng confirmation.

Hope we have more next year at this to keep it going, the support and crowds are amazing. 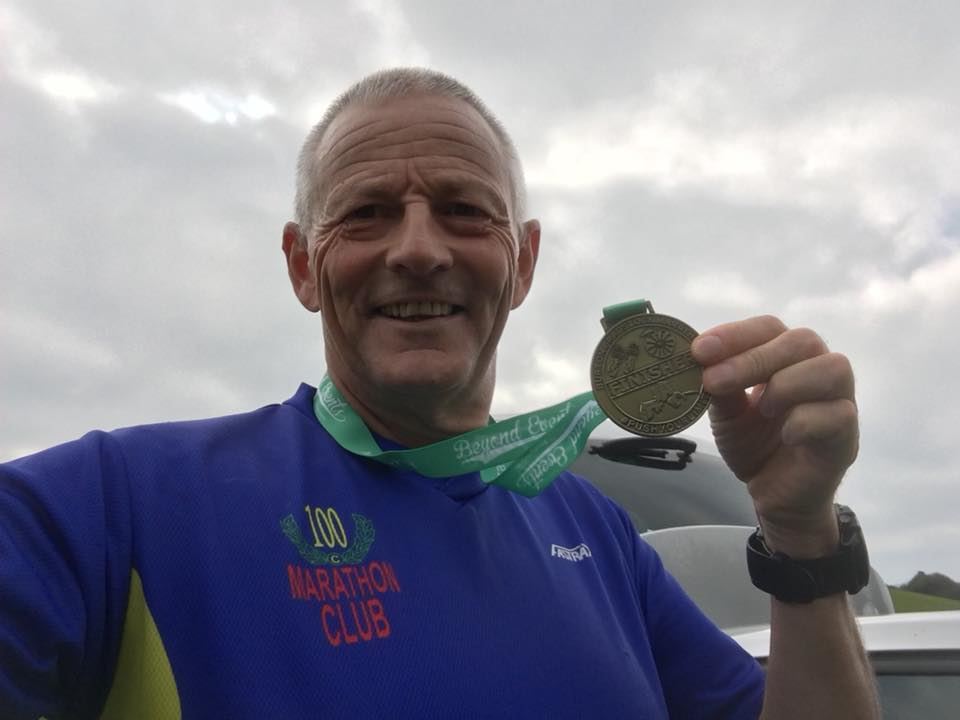 From Terry: New Forest Stinger off road muddy hilly half marathon, 1st in category, first ever individual prize, it's taken a while. 1:49 thanks Ian. Great event with 5 mile, 10 mile and half marathon (with a snorter of a hill exclusive to the half) options. A nice morning in the forest with great views and deer and ponies for company. Check it out 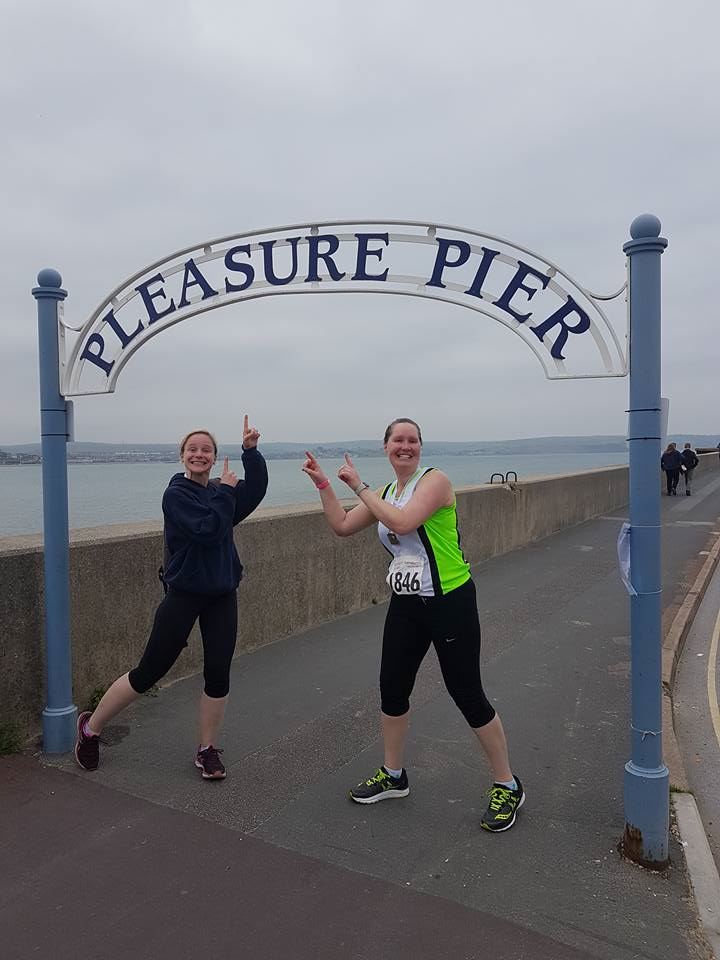 Weymouth 10, a very good turn out with the greens and whites. The course was challenging say the least, with double loop through the caravan site. With the horrible steep hill ‘twice for good measure’. Everyone enjoyed it as all smiling at the end. The support was amazing from other club members. Even more so from Yeovil Town RRC.

From Matt Driver:  To get to Weymouth for the 9:30 start meant alarms set for 6:30 and into the gloom we drove. No view of the sea until we're on the seafront, were there is an eerie calm. Ho hum, into the Pavillion for number and half the club has turned up on the basis it’s a nice day out and satisfies the hat ticklist for ten miles.
With everyone numbered up, we discuss the possibility of all making a deal to just go and have a full breakfast, but Matt needs the points.
The mayor says go! So we did. A nice two mile jaunt along the promenade to Bowleaze sees the 200 plus field stretched right out. Matt was storming away and could still see the leaders so he knew he could take a breather on Bowleaze Hill – Kev Brettle shot by without so much as an apology and was never seen again until the finish. Meanwhile everyone negotiated the hill well, June Moule managed to run every hill (well done for that), and dashed round the holiday camp at Preston.
A 2 ½ miles loop and your back at the Bowleaze Hill again (I know!!!), and the holidy park, and the 2 ½ mile loop, and then yippee! Back along the promenade…for 2 miles, with the wind against, with merry day-trippers across the path, ice-creams begging at every shop front. The plan is to set your sights on the clock, run to that (which takes f o r e v e r) and then sprint the last bit, looking good for the photos!
Kev Brettle – First YTRRC male – 1:09:53
Matt Driver – 2nd YTRRC – slower
Adam Batson – 3rd – not far away
Magdalena Kusmierczyk – First YTRRC female – 1:21:14
Jung Mi Yang – 2nd YTRRC
Catherine Hayden – 3rd YTRRC
Loads of YTRRC there today – well done everyone and it was good to see so many staying to cheer in our favourite club. I know some had their own personal struggles today, but isn’t that why we do it? To prove to ourselves how amazing we really are – Did you really just run ten miles? Great stuff!!! 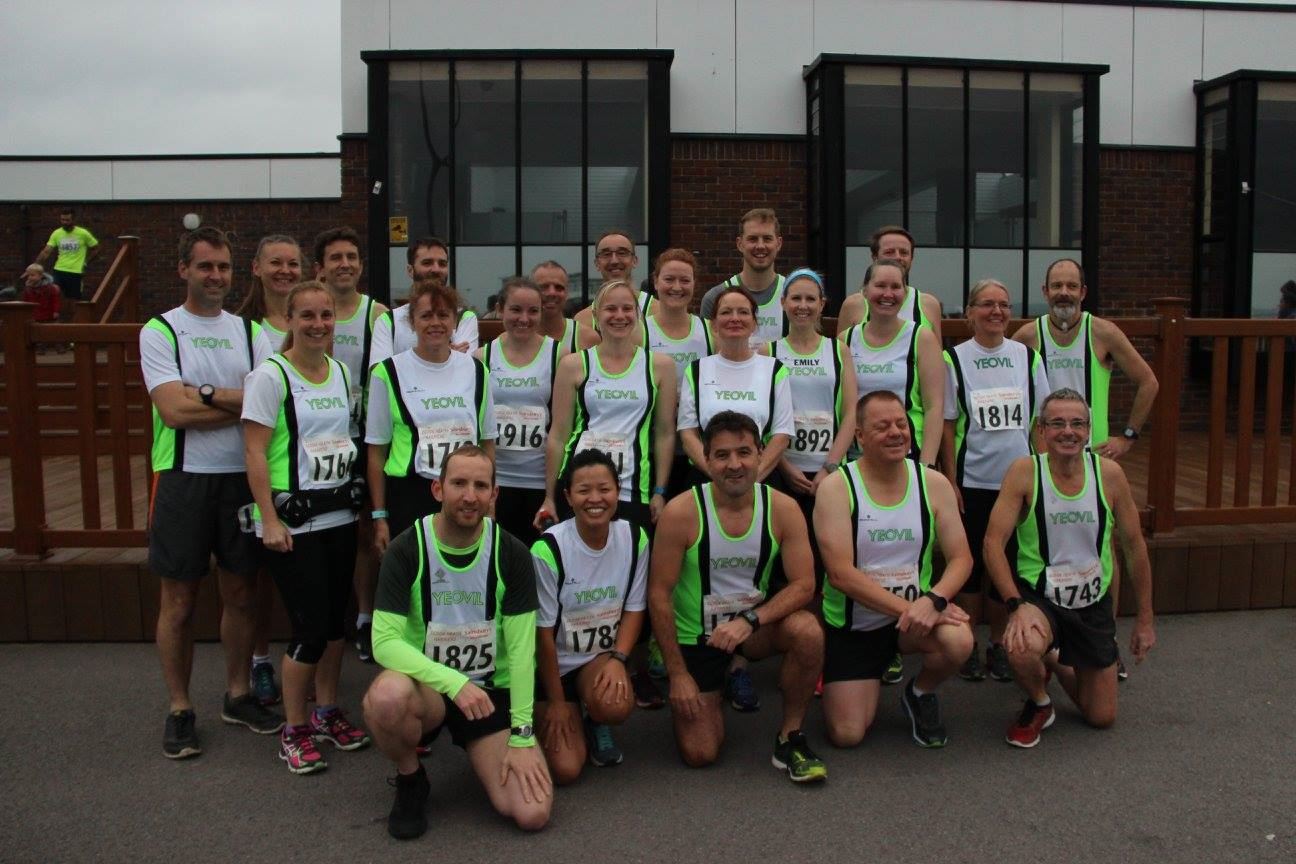 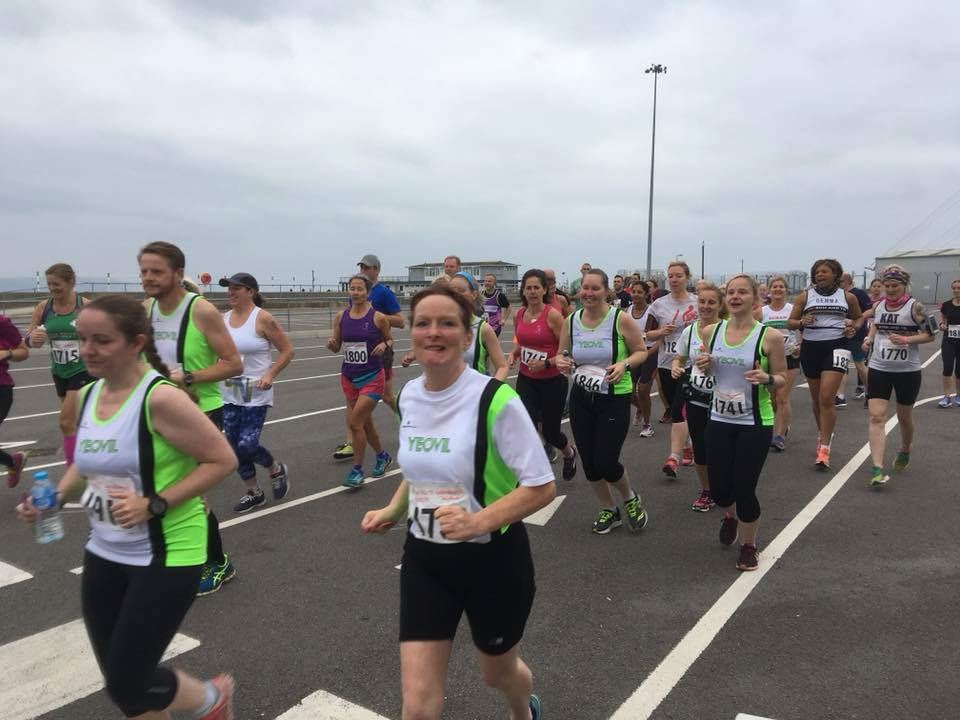 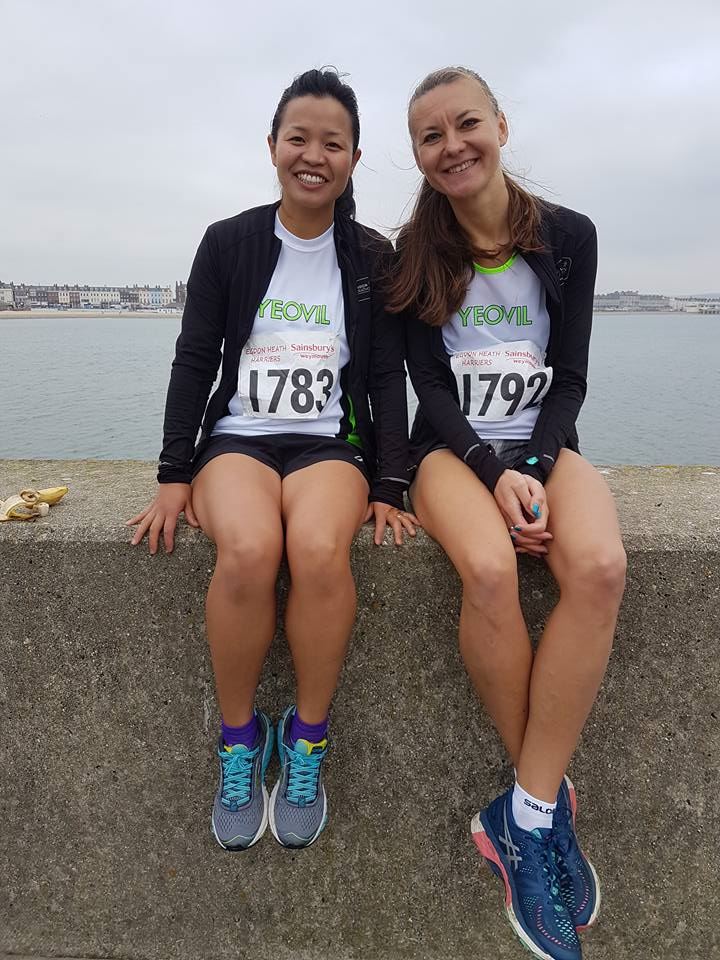 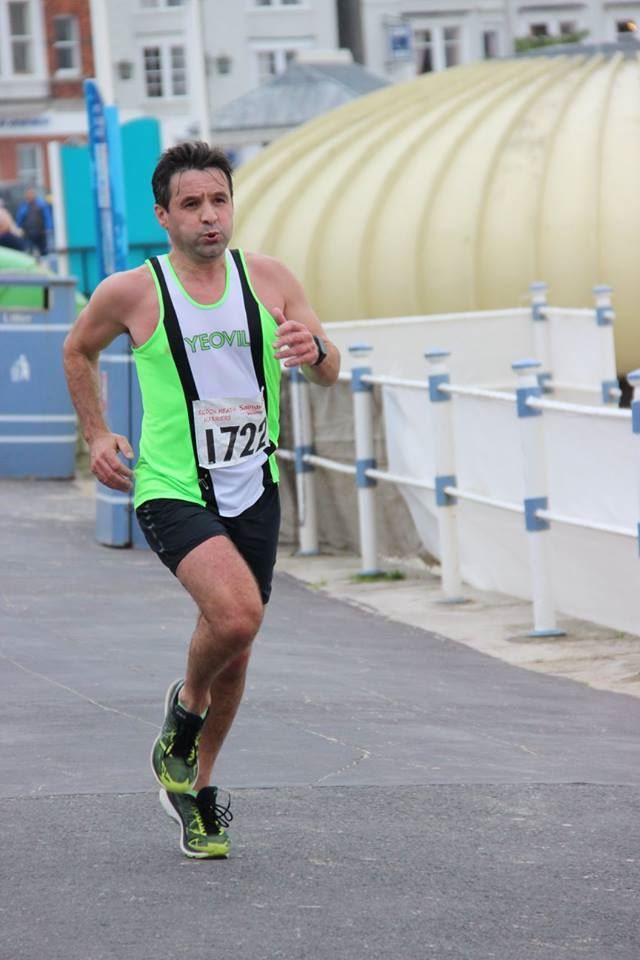 Kev with his Bad Cow Face 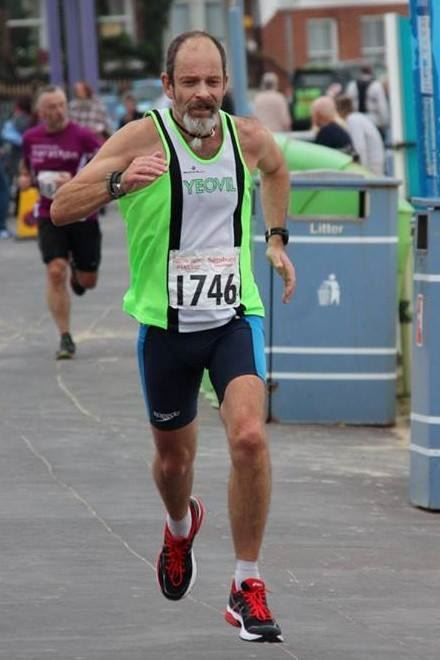 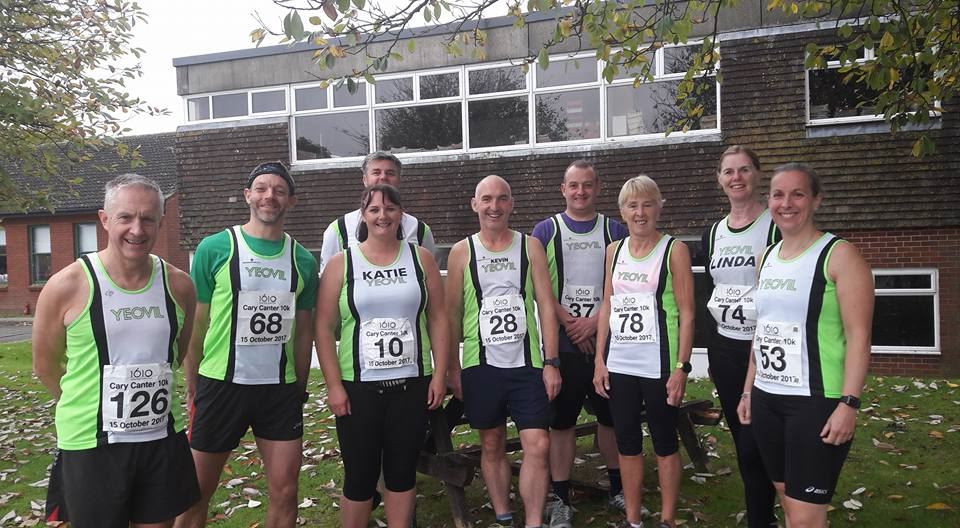 Points races today at Castle Cary and Weymouth ...
11 Green and Whites went Cary Canter and Paul Felstead was our Club Newbie vest and all.
Whispers that the course was tough .. very tough .. sent shivers to all Cary Canter Virgins,
Undulating .. muddy ...hills up and down.. Stiles stiles and more and more stiles .. some road sections .. it was a great course really well Marshalled with drink station at 5k.
Steve Lye was heading the Yeovil Charge from the start Kevin Doherty did pull alongside him at about 2k ... Steve looked at his watched looked at Kevin and changed up a gear and was gone . Steve Lye finished a very credible 8th place and his form has been improving week on week. Some excellent performance from other Yeovil runners included Kevin Doherty Michael Bird back on track consistently improving. Aubrey Wood Alan Smith Joanna Henley  Lesley Nesbitt Linda Membury Graeme Brown  Paul Felstead and Katie Brooks all did great and flying the flag for YTRRC.
1st male Steve Lye
2nd Male Kevin Doherty
3rd male Michael Bird

Great day out well done to all. 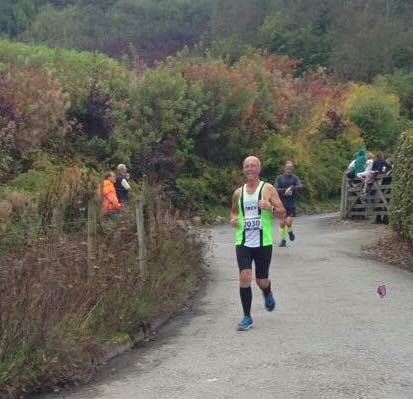 Time is getting on so if you want to come please book so we can get planning, it will close on the 10th Nov so Anita can do the table plan and other stuff. Also we need you to vote for the awards, you do not have to complete this for all the awards, if you do not know on a certain one then leave blank, this will close on the 24th Oct to give Phil time to do the engraving.

From Catherine: Anyone wanting to be in the VLM ballot please make sure a committee member is shown your rejection. Posting it on Facebook does not count as there is no guarantee it will be seen. I am happy to have them either by PM or email but I won't be trawling the group to pick them up.

There were more than 530 children at the last race!!!!

PUB RUN – YEOVIL CATTLE MARKET / CHIP SHOP (12th October 2017)
Tonight Phil then Alison led the Pub run from the chip shop opposite the old cattle market in Yeovil. As usual there was also a faster paced group running in parallel to ours. We ran up to the old cinema where group photos were taken, then continued to Princes Street. We ran into the Park using the underpass and flight of steps. We made our way via Huish and Beer Street to a large empty car park for factory buildi...ngs and offices. The run continued via darkened paths and roads to Westfield and the Ilchester Road. We ran across Mudford Rec where track running and hockey was taking place under floodlighting. We then headed eastward following roads and paths crossing St Michaels Avenue and the top end of Lyde Road. A fox was spotted as we approached the new estate (Wyndam Park). Crossing Lyde road again we ran along Meadow Road. Turning left we descended down a long flight of steps and turned right at the bottom. We continued along another darkened path where a passing walker said we looked like a group of aliens. The path came out at Monmouth Road. We turned up to, then ran along Roseberry Avenue. Crossing St Michaels Avenue again, we ran along Grass Royal, and down Mount Pleasant to Eastland Road. We turned and ran up through Kiddles to Goldcroft for the final leg. This run through the north and eastern part of Yeovil was 7 miles. Thanks Phil and Alison for an unusual and interesting pub run. 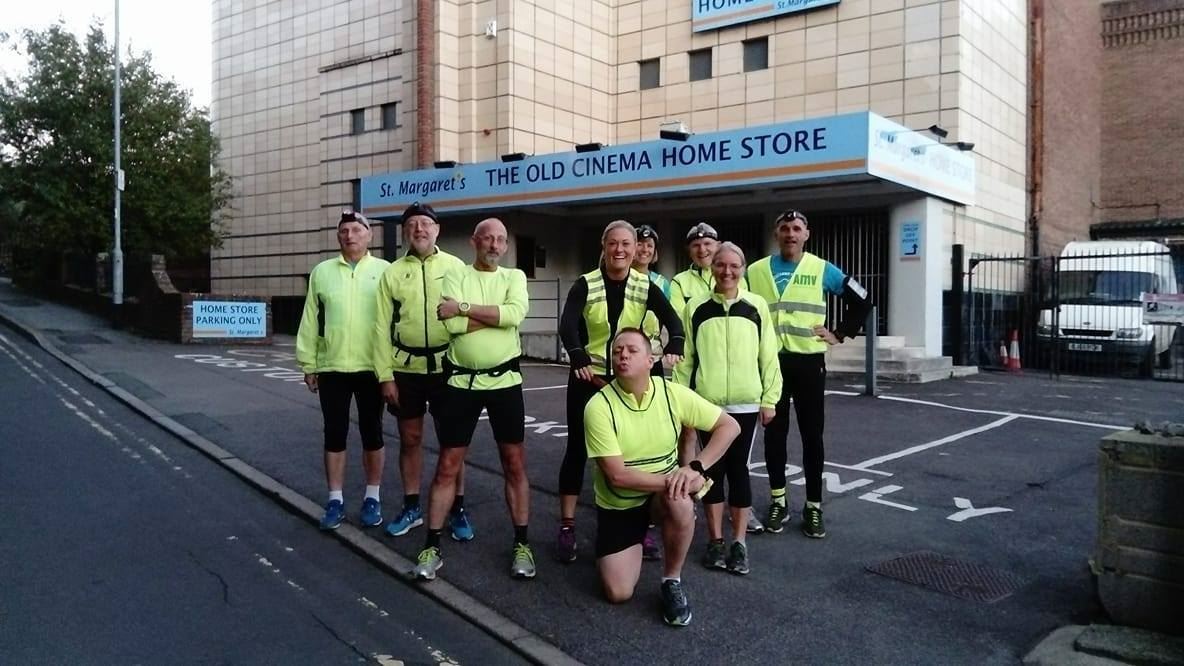 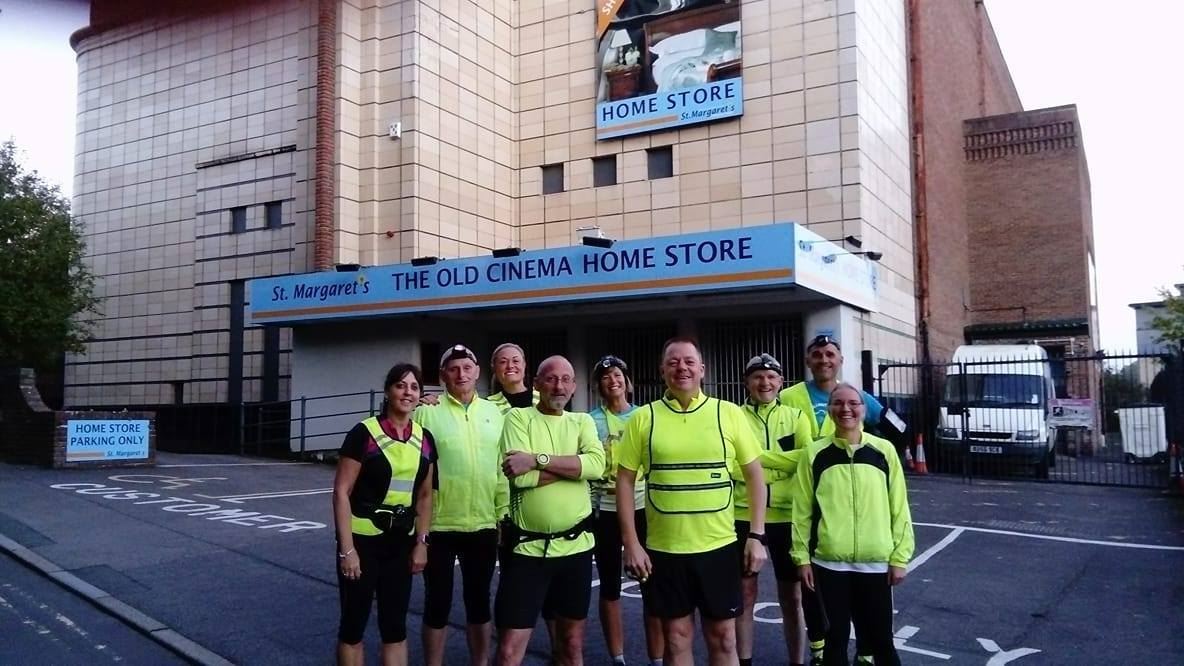