The End is Near

Hopefully we will be back to Club Runs with groups of 6 (5 and run leader), unless there are any changes from EA, it will be discussed at this weeks Committee Meeting. If you can be a run leader please let me know and I will put the events up on the website early so if groups fill up we can try and add another. Once again please book and do not just turn up. Thanks

You should now have received an email, if you have joined the website, to remind you that your membership is due by the 31st March. Thanks to all that have paid today. There will be two more emails from the website on the 15th March and a last one the day before.

From Matt: With the Ireland/Italy game being a little tedious, and the sun shining when I've got nothing better to do...so here goes... Angela Claire needs to stop watching rubbish like LaLa Land and either log her miles, or go and do some - stuck where she is, just 0.39 more would get her to a tidy 30 miles! or wait until the summer sun, I don't mind. Tristram Clark has done Croyde Beach and moves to 54.16, as Sara Driver trundles into Chivenor on 63.45. Kat Hurford has been out and about with her dog (but not responding to my tooting ) and is approaching Bideford at 74.83, while Shaun Powell is in the outskirts on 77.74 On 91.29 Lauren Jessica is close to the now-famous Peppercombe, as Nick Cox is at Beckland Bay on the Hartland Heritage Coast. Matt Driver has made it to Bude and the strange little canal that runs to the beach, and at 122.3 trails Natasha Turner on 126.45 and at Widemouth Bay - Do any of you know the joke about the wide-mouthed frog? New to our reports, although he may have been looging regularly, is Martin Alderman . On 138.5, Martin is almost at Boscastle and could always pop in to the museum of Witchcraft and Magic! At 140.9, Nichola Chesterton is past Boscastle and on to St Petroc. Beyond that is Nat Robins at Trebarwith on 145.35, and Mark Copping a little further at Dannonchapel (Mmm Danon) on 148.78.

Kate Gowers is on 149.41 and just coming upto Barrett's Zawn. This oddly named beach used to be a slate quarry and is accessed via a tunnel you have to crawl through! With ever more quarries, caves and cliffs, the SWCP continues up and down the various hills and valleys, and across small brooks and streams as they make their way to the sea. Filly Horse Rock, St Illickswell Gug and other fantastically named features take us to Port Gaverne and Port Isaac. On to Varley Head where we left Marie Lockwood last week, we press on past Greengarden Cove and along Reedy Cliff, which has seen big rock slides in the past. On sunny spring days this coastline would be beautiful, picturesque and a joy to be running, whereas on a cold, wet, windy winter's day, it would be terribly bleak and dismal. Port Quin looks and sounds like a major harbour, but as with many places along this coast, is nothing more than a two house hamlet making use of a tiny rugged natural inlet - sadly, it has the nickname of "the village that died" having had it's entire fishing fleet wiped out during a savage storm in the 19th Century!

More coastline follows, of course, and no doubt it's fantastic scenery, but also more of the same as we circumnavigate Pentire Point. A particular sight is The Rumps! Lying on Basalt rocks, this is the remains of an Iron Age fort and the inspiration for the poem "For the fallen" by Laurence Binyon - look it up! Rounding the Point and turning South, we reach the sandy beachs of New Polzeath, Polzeath abd Trebetherrick. This is the estuary of the River Camel and is Padstow Bay. I haven't forgotten the runners, but it's only now we catch up with Claire Shucksmith at 161.94 whp may be staying at the St Moritz Hotel, and if so, should be having a pint of Doom Bar ale, since the Doom Bar sand bar is in this estuary. Over Bree Hill with it's Tumuli (cairns) and onto the dunes and the village of Rock. This is where my sister and I used to leap into the soft dune sand as shown in the pictures! A short ferry hop, or a long swim, and the South West Coast Path reaches Padstow itself. Recorded in the Domesday Book of 1086, Padstow is now a very nice town and home to the National Lobster Hatchery - they hatch lobsters!

Heading back up the estuary our SWCP goes out to Stepper Point and now a flatter path takes us along the cliff tops past steep cliffs, caves and old quarries. Quarry waste is here used for cliff-edge dry stone walls and for separating the fields. At Trevone, we find Rachael Gosney actually flagged at a place called "Nowhere", but that turns out to be a shop in the town! Rachel is at 169.52 miles, while just over the next hill/cliff is the very sandy Harlyn Bay with lovely clear seas. As we pass Big Guns Cove, Mother Ivy is at 171 miles. She's not a YTRRC runner but the name of yet another sandy bay which leads us onto Trevose headland and its lighthouse.Back around the headland and as we again go South, we find Booby's Bay - Luckily no-one is here otherwise I'd be tempted to write something...but Mel Cox has reached the next bay already, which is Constantine Bay. While she may be dreaming of an upcoming wing-walk ( !) we can learn that Constantine was a King of Britain and ruled Dumnonia (Cornwall) in the 6th century. Donna Reeves is just half a mile further on and having got to Treyarnon at 174.97, is about the mid-point and average distance covered by our 33 runners, so we'll take a break here on route. 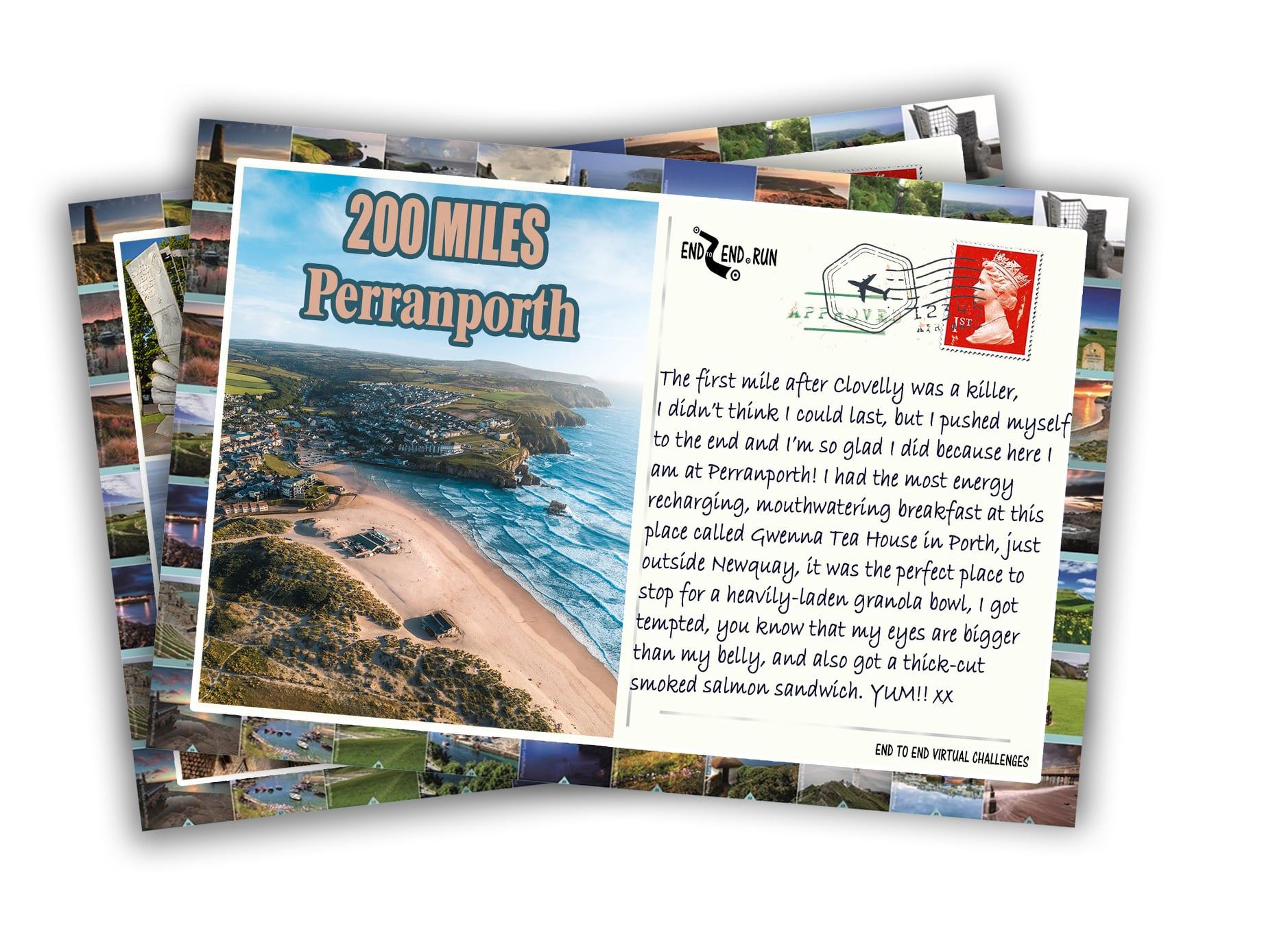 Got to go, the rugby is getting interesting!

From Donna: Most of you will be happy to know that Bungy has safely left Union st Plymouth on 441.53 miles, I have been told that the night life there is not what it use to be, he is now on to the quieter village of Bigbury on Sea in South Devon. Tim Willis is heading towards Lizard 293.27 and I'm sure he will collect his 300 miles postcard later. Lesley Nesbitt is on 259.65 and has left Penzance and is on her way to Helston. Sue Mallinson 241.13 heading towards Lands End, which must feel like starting again. Paul Thomas 229.72 and is just leaving St Ives with Casper right behind him on 229.36 Andrew Holloway who has started to log quite a few miles each day 221.92 and is at Gwithian Sands Louise Ward is at Godrevy which is a beautiful National Trust area 212.58 June Moule is at St Agnes 209.48 The rest in Cornwall are:

The rest in North Devon are

Back in the Day

Good evening. Having moved away from Yeovil I have tried to keep an interest in what was known as Yeovil Road Runners and Marathon Club. I’m assuming that your club was a spin off from YRRMC? It was formed in the early 80’s by John Flatters and we used to meet at his home off Preston Road on a Sunday morning where John would have mapped out the route for the morning. We had a hard core of about a dozen or so. Myself, Dave Leak who can 2.35 in the ‘83 London, I managed 2.58. Steve Philips, Colin Williams, Brian Hartnell, John Clancy and the few who I cannot remember the names. John was a stickler for keeping things tight and you daren’t fall foul of him! One memory was the twinning with Herblay in France. About half a dozen of us went over and we were put up by the local community and we ran the Paris 20 K starting beneath the Eiffel Tower. It was pandemonium as the streets still had some flowing traffic. The water stations were overwhelmed and the took to handing out large plastic bottles of Perrier who were the sponsors. Great memories. Anyway, without further ado I will leave you in peace. Good luck in the future and hope that once this awful virus has receded we can all get back to normal. Regards, Roger Matthews