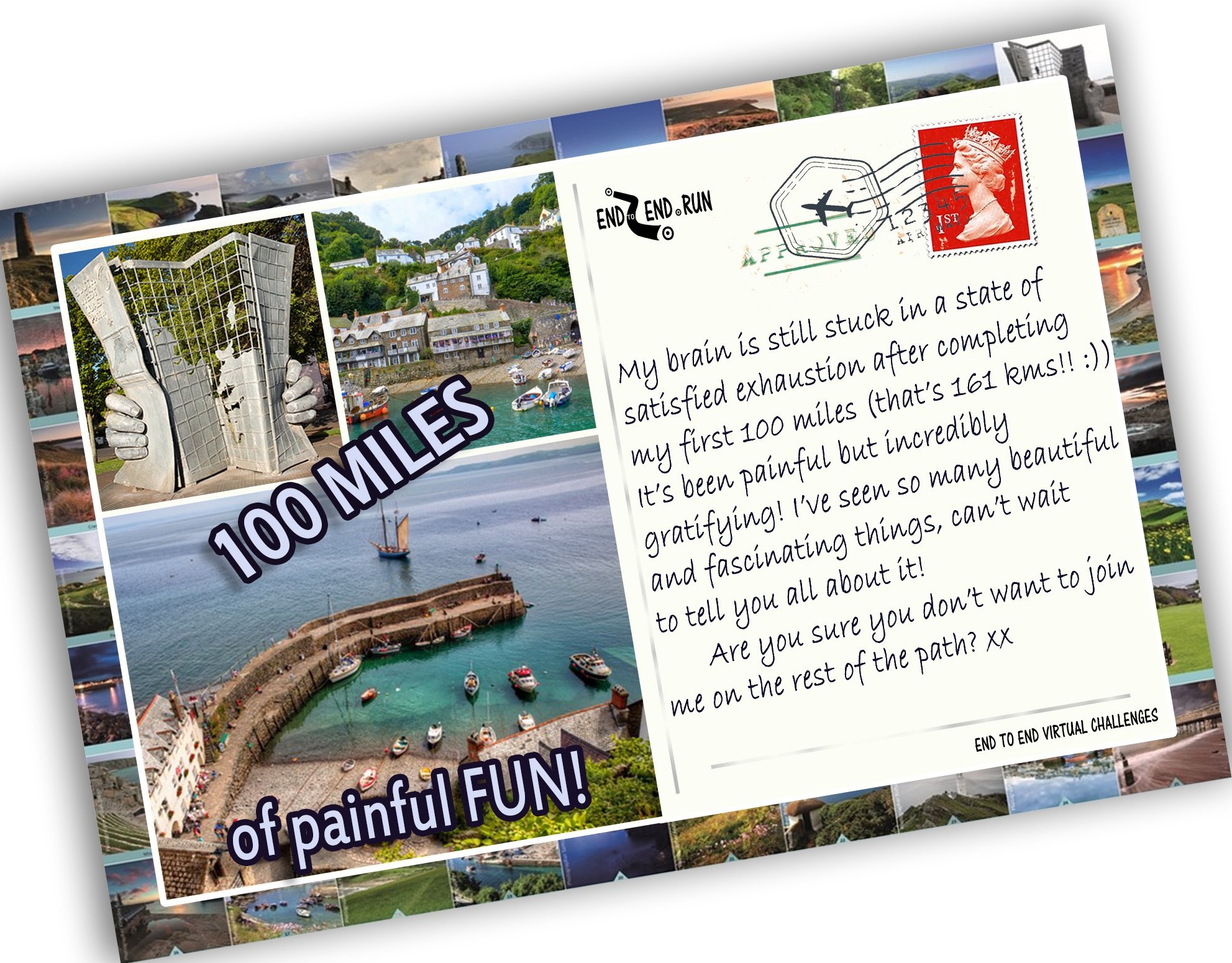 From Matt: No excuses, just a late report, but Angela Claire is now 29.61 miles into the South West Coast Path, and is nearing Combe Martin where Tristram Clark lurks furtively on 34.56. Kat Hurford hasn't been dragged anywhere by her huge doggies, so is still at Morte Pointon 45.56, and similarly Shaun Powell is still in Croyde Bay on 52.65.Sara Driver has made progress and is aptly wandering round Horsey Island Wildlife Reserve on 60.45. Lauren Jessica has leapt to 63.41 (good week!) and joins the group trundling round the rivers at Bideford, Nick Cox on 76.05 and Matt Driver on 84.0.  Nichola Chesterton is back on the Coast at Westward Ho! on 85.51 and will be heading onto the cliffs where we left Adam last week. This section of the SWCP has a series of wooded Red Triassic cliffs where the path rises and falls with the hills, much like where we find Kate Gowers on 91.88 as she passes the old coastguard cottage at Peppercombe. Peppercombe has high craggy and "romantic" cliffs where the ancient Giffard family once pic-nicked, except their son stood up too quickly and slipping, fell over 130 feet onto those large craggy rocks below "yet suffered no hurt", hence the place is known as "Giffard's Jump"!

Unfortunately, there's little to see of Peppercombe Iron Age Fort, so Claire Shucksmith has passed by without so much as a glance, other than noting the lime workings on the beach, as she heads off into Sloo Woods at 92.20. Natasha Turner is in the similar Worthygate Woods at 92.94, and runs between lush ferns and under sun-dappled hazel leaves (we wish) From here the path weaves between farmland and the coast, with heath grassland and stumpy woodland peering over those steep cliffs down to the rocky bays. Eventually the path skirts the top of Clovelly, but no-one is there now, so we'll skip past the sights of this tourist spot of incredibly steep "streets" down to its picturesque harbour. More similar coast path follows, as we head to Blackchurch Rock with its wonderful rock strata formations (shown in the pic). As Donna Reeves gazes at this sight, she'll be happy to have logged 100.04 miles and to have received her postcard as others have upon reaching this landmark! This is now part of the Hartland Peninsula and we cross National Trust land before reaching Hartland Point where Anita Garrett is at the oddly named Damehole Point. We'll hope Anita hasn't needed the services of the local Coastguard heliport! Andrew Holloway at 107.45 is at Hartland Quay. Named for its original harbour use, it now feels the full force of the Atlantic breakers and, like much of this coast, gives little protection to boats. Nice to visit though and I'm sure Andy will enjoy it!

More spectacular cliff formations, high wooded paths, and now waterfalls reaching the beaches far below, this section has a distinct Southerly direction, taking us over Embury Beacon, which is an old Iron Age fort disappearing as the cliff erodes. Mel Cox is taking inspiration from the sea view, much as Ronald Duncan did when he wrote many of his literary works while based in a small hut, now maintained in his honour. On 113.5 miles, Mel is asking the same question as you - "Ronald who???" Apparently Ronald wrote "Where in this wide world can man find nobility without pride, friendship without envy, or beauty without vanity?" The answer isn't me, nor even a woman! It turns out he's actually whittling on about horses! More heathland, precipitously steep cliffs, steep paths and loose footing, not to mention mud, and the path leads us to Nat Robins on 114.37 miles, and Rachael Gosney on 115.82. Rachael has just passed another such hut, this time obviously less inspiring as it is named the Hawker's Hut after Robert Hawker, just an "eccentric" poet! More similar landscapes are finally interrupted by GCHQ Bude, which I can't tell you about - Shhh!

So on to Duckpool bay, and Sandymouth Bay - Cool, a sandy beach at last! We carry on along this sandier coast, still on the cliffs, until we reach Bude. As a kid, I loved the wide expanse of Bude Beach with its huge tidal range and crashing waves! The town is grey and dull, as I remember, so we'll cross the canal (!) and slog to the top of Efford Beacon and head on across the cliff tops. Steadily, we'll reach Widemouth Bay, which is a wide bay at the mouth of a small river. Heading up to Dizzard Point we find Adam Hawkins on 127.96 miles. Everyone after this point has less than 500 miles to go - something a few of us can only dream about Congrats so far go to...

Well done all...keep the progress ticking over and we'll get there!

From Steve: Hi all YTRRC boys and girls I hope that everyone is staying as safe as possible and still enjoying the odd run when possible. After our last zoom meeting on the 3 of February everyone thought it would be a really good idea to remind anyone who needs a chat to get any concerns or worries of there chest that we have at least two St John’s mental health first aiders, June Moule is our current welfare officer and is always approachable and Joanna Henley has also volunteered to be available obviously working around there jobs jo is also our covid adviser. June can be contacted via our website just look out for the welfare officer . If telephone numbers are needed for either of them someone on the committee should be able to help. On that point we are still looking for a male welfare officer if anyone is interested and hopefully had some training in that field. I see that quite a few members are getting out in two’s and thought that if anyone was looking for a running buddy they could always post on our page following covid guidelines of course. We are hoping to have a zoom AGM this year with details to follow after our next meeting. We are still honouring our charity donations with £100 pounds going to the Yeovil hospital appeal and £500 pounds going to the Jane Tomlinson appeal which was money raised by all our fantastic members from the Yeovilton 5 k series and was nominated by John Enright  one of our much loved and respected previous members so I am appealing for all members old and new to renew their membership this year and hopefully we can all get back to doing all of our fantastic club runs, pub runs and restart our club running family again. Ok sorry if it’s a bit of a long one but sending best wishes to everyone and hopefully see you all soon

From Kev: You'll have to wait until 2027 to run another Sunday 14th February Half Marathon.. (Again we can be flexible ) Socially distanced with friend or family . Thank you to YTRRC for £50 towards ink etc, and kind donation of paper and laminate sheets from couple of people ... we are back on track for The Valentine Day Half Marathon .... event 5 of our Autumn winter series of 6 events... we've tweaked March Marathon into easily achievable choice of 3 options ... details after HM.... these laminated Momento's have been wiped over and will be stored untouched in envelope for a week too , Good luck Happy Running 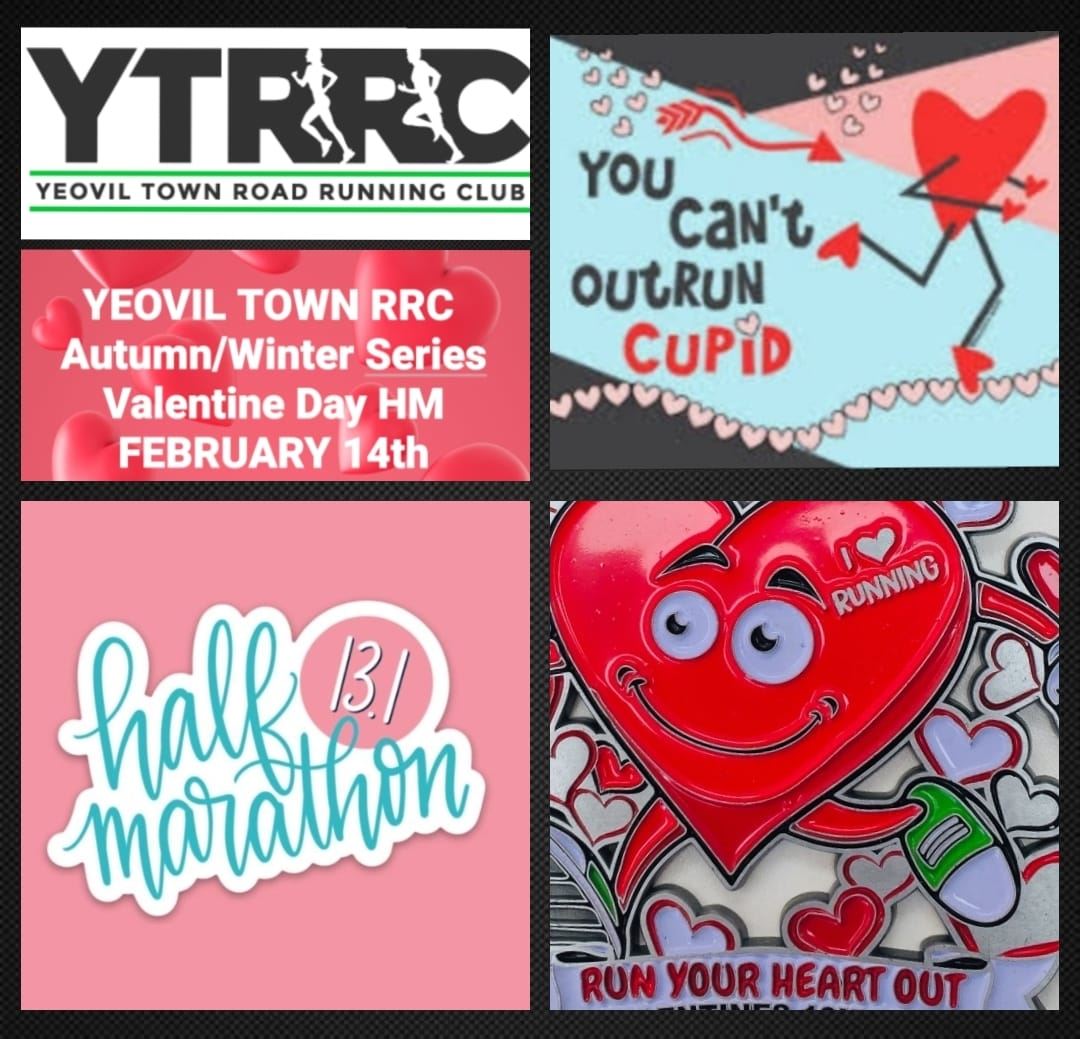 Brian Lane has started on the Route 66 and has covered 207 miles in the first month, well done.

Dominique Muir  - 116.47 miles and has left the A30 and has just gone past Crediton Rugby Club

Bananas From Charles: Well this is amazing! If I am counting correctly 40 of you did the YTRRC GB 5miler. They are:

Bungy Williams  (our guru in most things),

And I know there are more.....If you are missing, from this list let me know, please. What a flipping' turnout...amazing. I am hoping that a suitable token for your efforts will be with us in the next few weeks. Over the next few days I will "paw" over the short listers for the three category prizes. There is one stand out and some very close ones to call..... Thank you, everyone for participating and making our very own vegan *extraordinaire * Kevin Doherty  the special man, that he certainly is.

Wednesday Update from Donna: South West Coastal Path Virtual mid week Brief. (This was done from 3PM today as site keeps crashing) Wow many more have now entered Cornwall! Bungy has gone way past Lands End where he said was like starting again. Bungy 270.76 past Penzance at St Michael's Mount Tim 195.54 past Holywell Bay on way to Perranporth Lesley Nesbitt 152.70 is now in the lead for the ladies and is entering Port Isaac Louise 143.43 is in Boscastle Richard 138.33 is near Boscastle Linda 137.42 left Beeny on way to Boscastle Sue Mallinson 135.33 at Beeny Sharon 125.58 is on way to Crackington Haven Paul Thomas 125.22 at Widemouth Bay June 123.49 left Bude on way to Widemouth Casper 119.19 just leaving Hartland Sandra 116.54 is at Hartland Marie 116.52 is socially distanced with Sandra at Hartland. The rest of us are in North Devon.