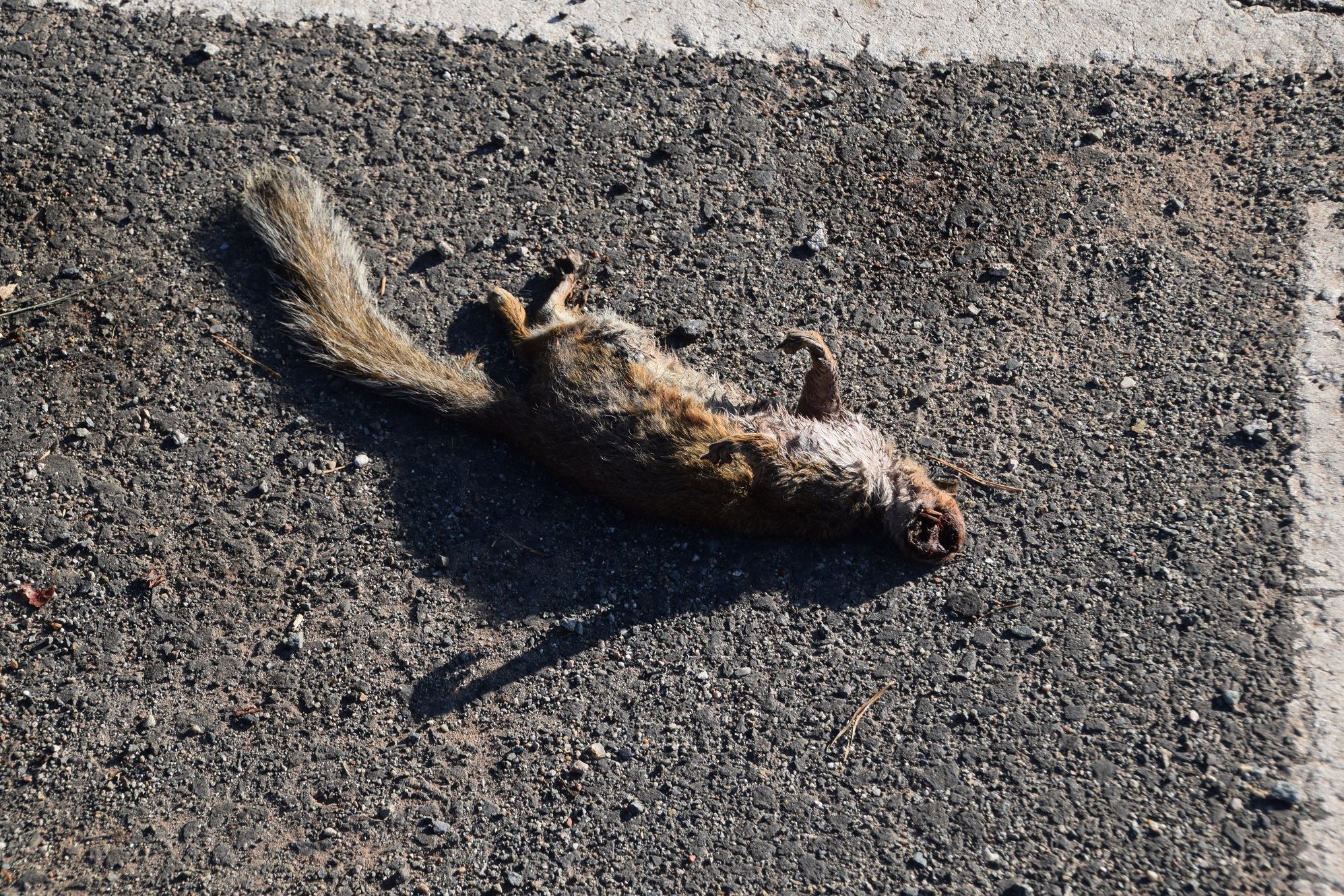 Rob Jones had done the Snowdonia Trail Marathon last year and decided to rope a few others to give it a go this year. So Rob, Steph, Magdalena, Gary Stickler, Rich Howes, Kirsty Norman, Nathan, Pippa, Els Fontana Pete Darton and his brother Jon drove up to Betws y Coed Youth Hostal that would be our HQ. 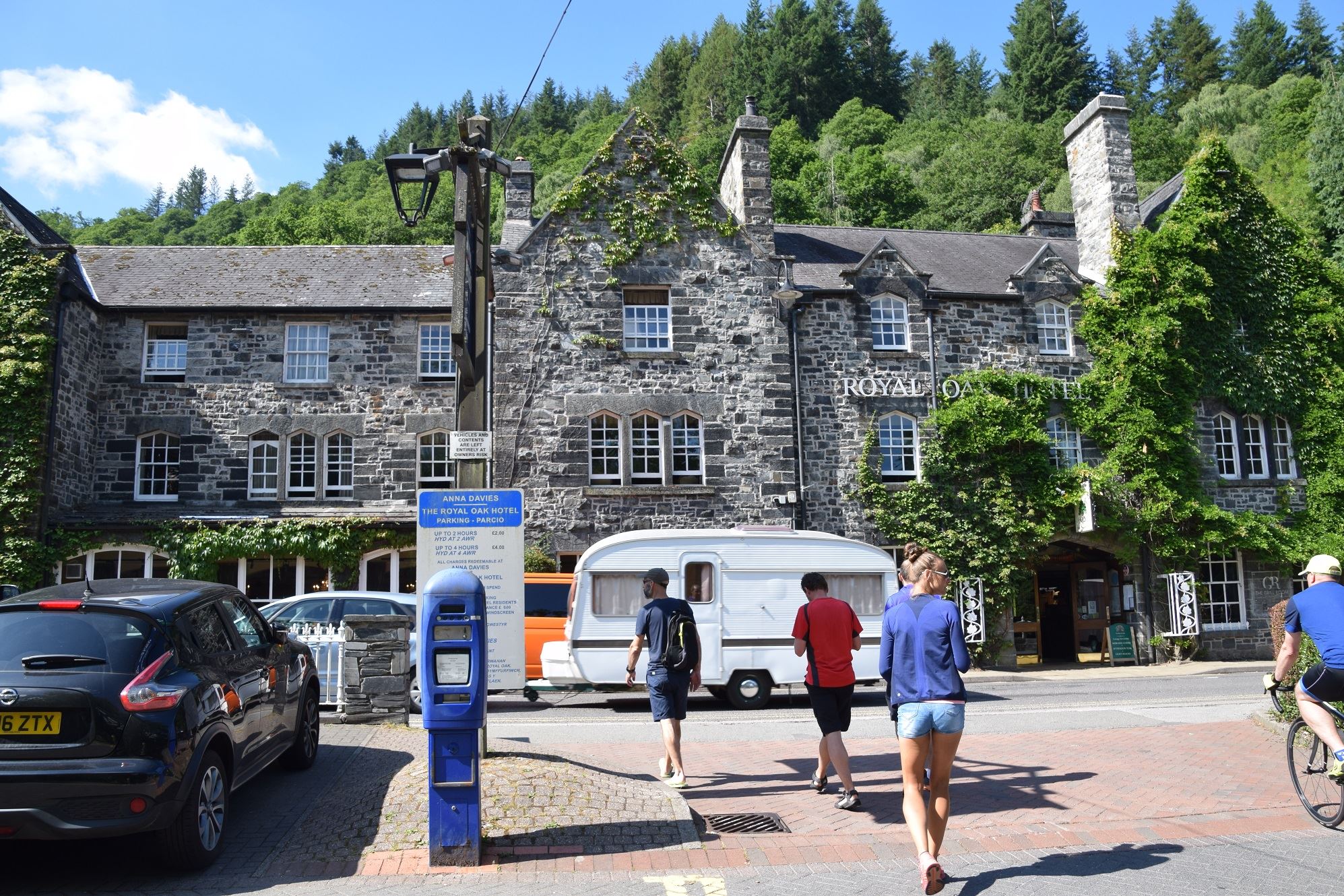 We got up there on Friday and started the planning with a map of the Route on the Pool Table. 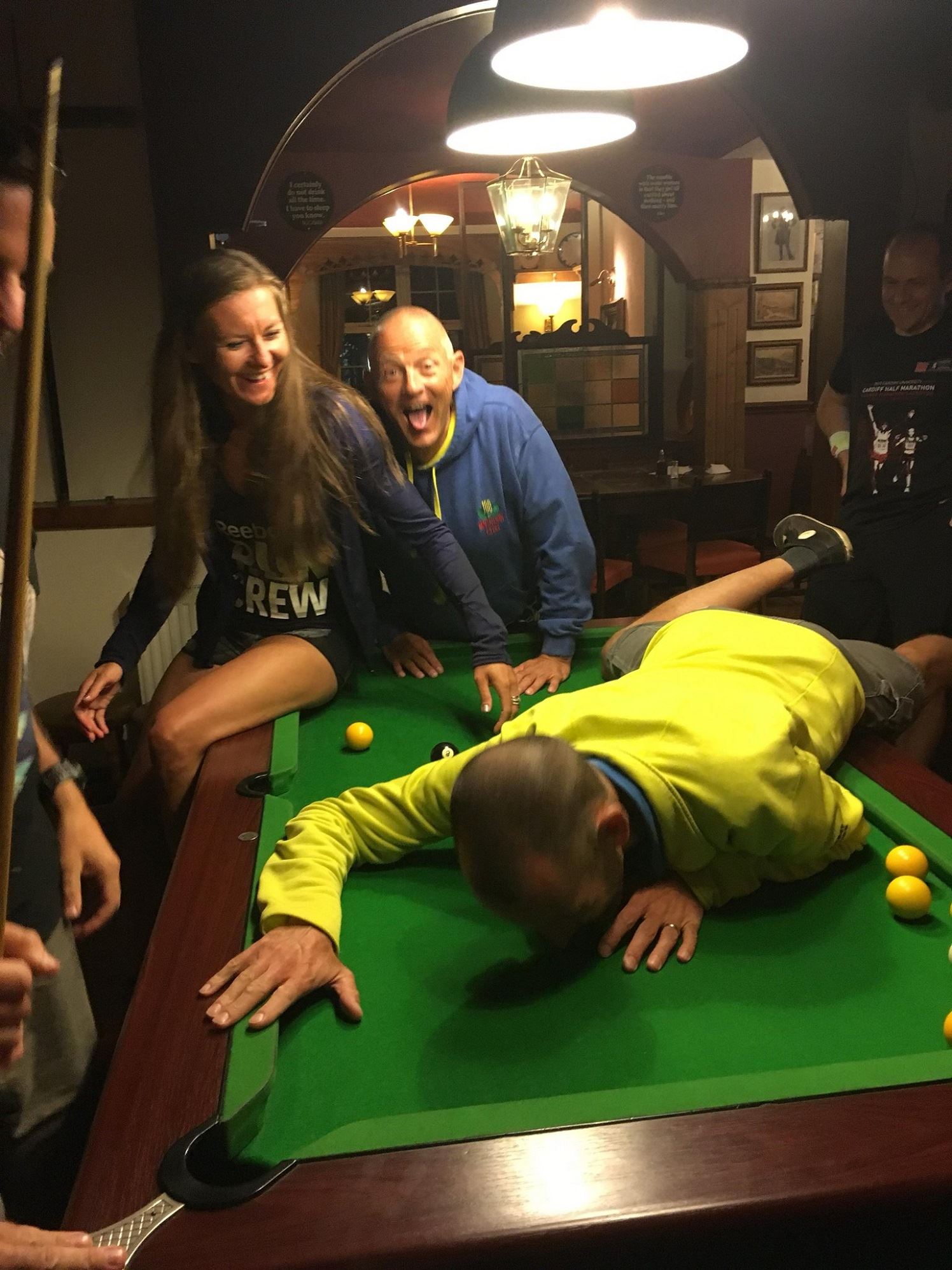 On the way up Rich and Steph decided to kill a squirrel, photograph attached. Saturday we headed for the Expo to pick up our Race numbers and the revised kit we had to carry, they decided that we didn't need waterproof trousers. Steph made a big mistake on entering the Race and was not in the marathon but the 5k, sorry 10k. We headed back to HQ and went out for a meal, it was hard to get a table and when we did there was not enough room for the food, well there was for all of us apart from Rob's extras that needed two tables. Final prep was done back at HQ with bladders filled up and numbers put on. I think the rest of the Hostal were glad the loud people from the night before had gone, or so they thought. Did someone mention Ed?

Sunday came and we headed for Llanberis and the start at 9 am for the Full, 9:45 for the Half and sometime in the afternoon for the 10k.

Steph showed us her 10k warm-up and Rob tried to copy. 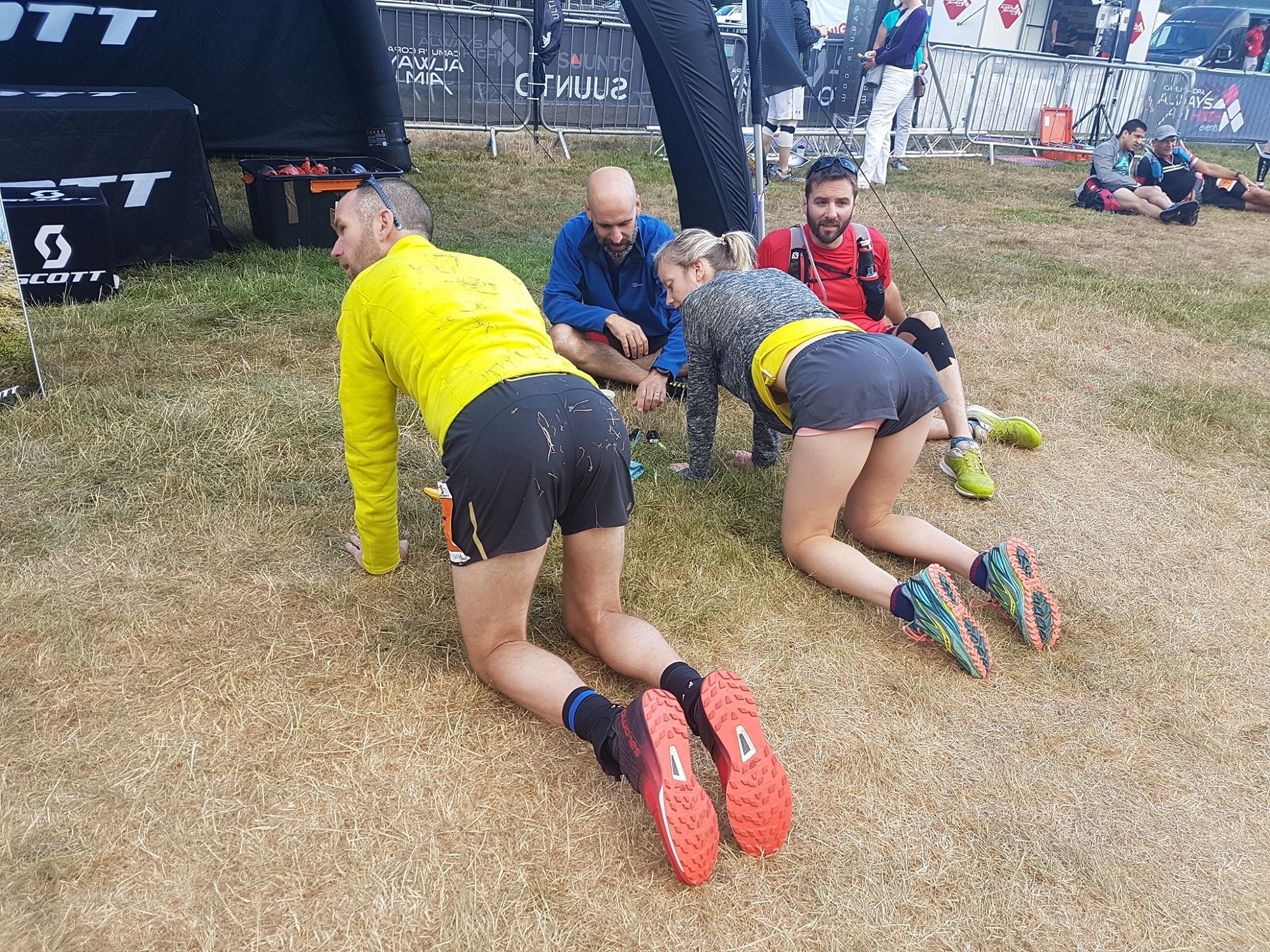 The before phot was taken and then we headed for the line. 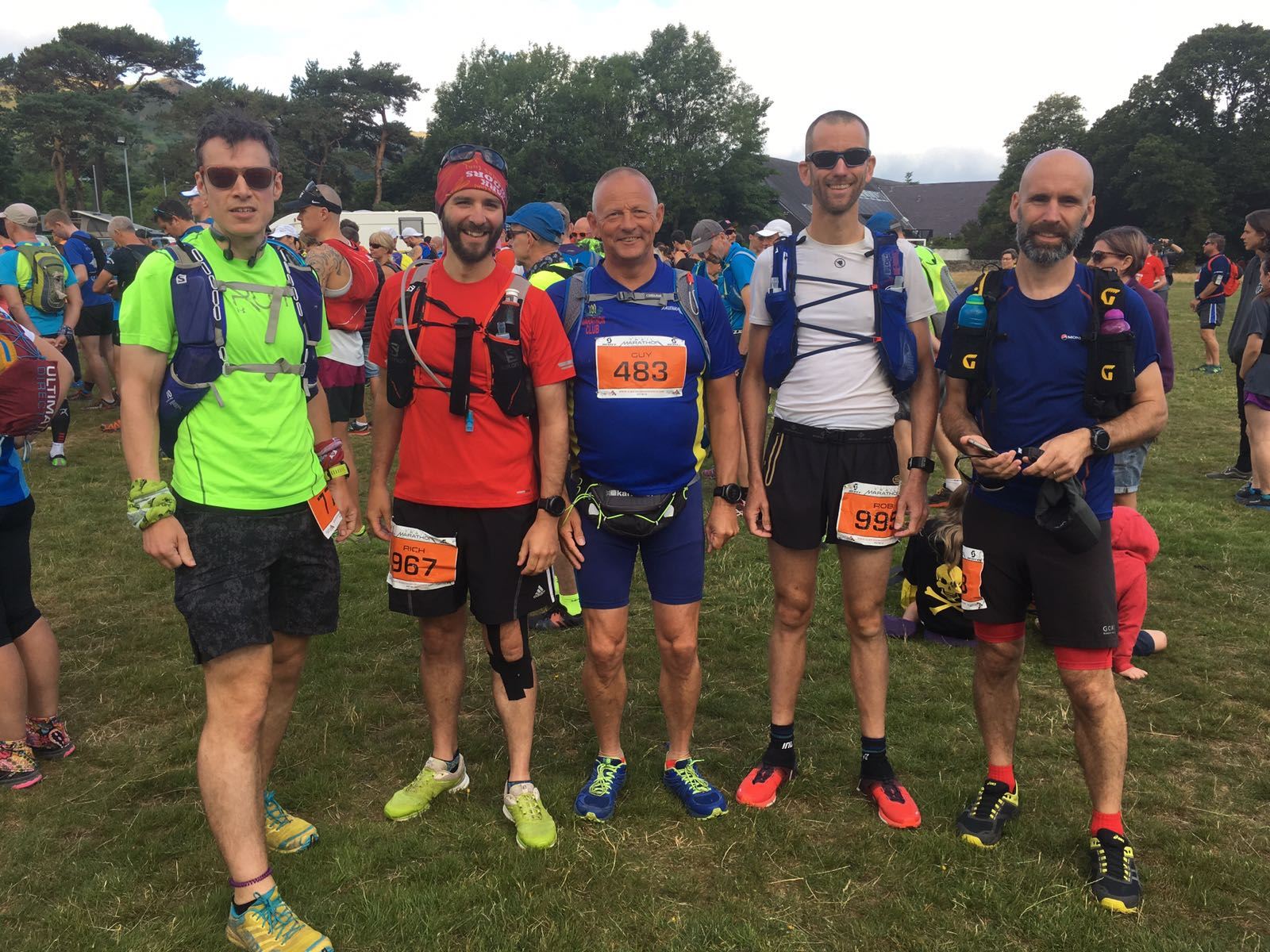 The race started and there was some flat road for a bit then it was turn left and start climbing. It was a very technical course with various types of terrain with some stunning views. I managed to take a fall at about mile 6ish but luckily it only hurts now and didn't stop me during the Race but could feel a bit of pain hip, more Red needed.

While the middle seemed flatish it was still hard work with boggy ground in places and then at mile 18 you start to climb with an Aid station just off the carpark after the first climb at Pen Y Pass and then the long climb just short of Summit od Snowdon. At points you are using four points of contact to climb up, you also have the tourists both coming up and down getting in the way. It just seemed to go on and on till you finally get around the corner and you can see the top. On the way up there was a lovely breeze and you were in the cloud for a bit as well, when we finally got to the top it was then the hard work of getting down, loose gravel and very steep just so your toes smash into your shoes for added pain. As you head down the heat turns up and you lose the breeze, there were a few fallers at this point, slow close as well from the end. There were loads for tourists heading up and the train going by as well with more outstanding views as you head down. As you left the track to hit the road back down to the finish I noticed a Barn selling Ice Creams so I brought a Magnum (always carry £2 in your shorts) and ran down the steep hill eating it. You get to the town and head away pass the Hotel and then turn back on the trail to come in from the back of the town. 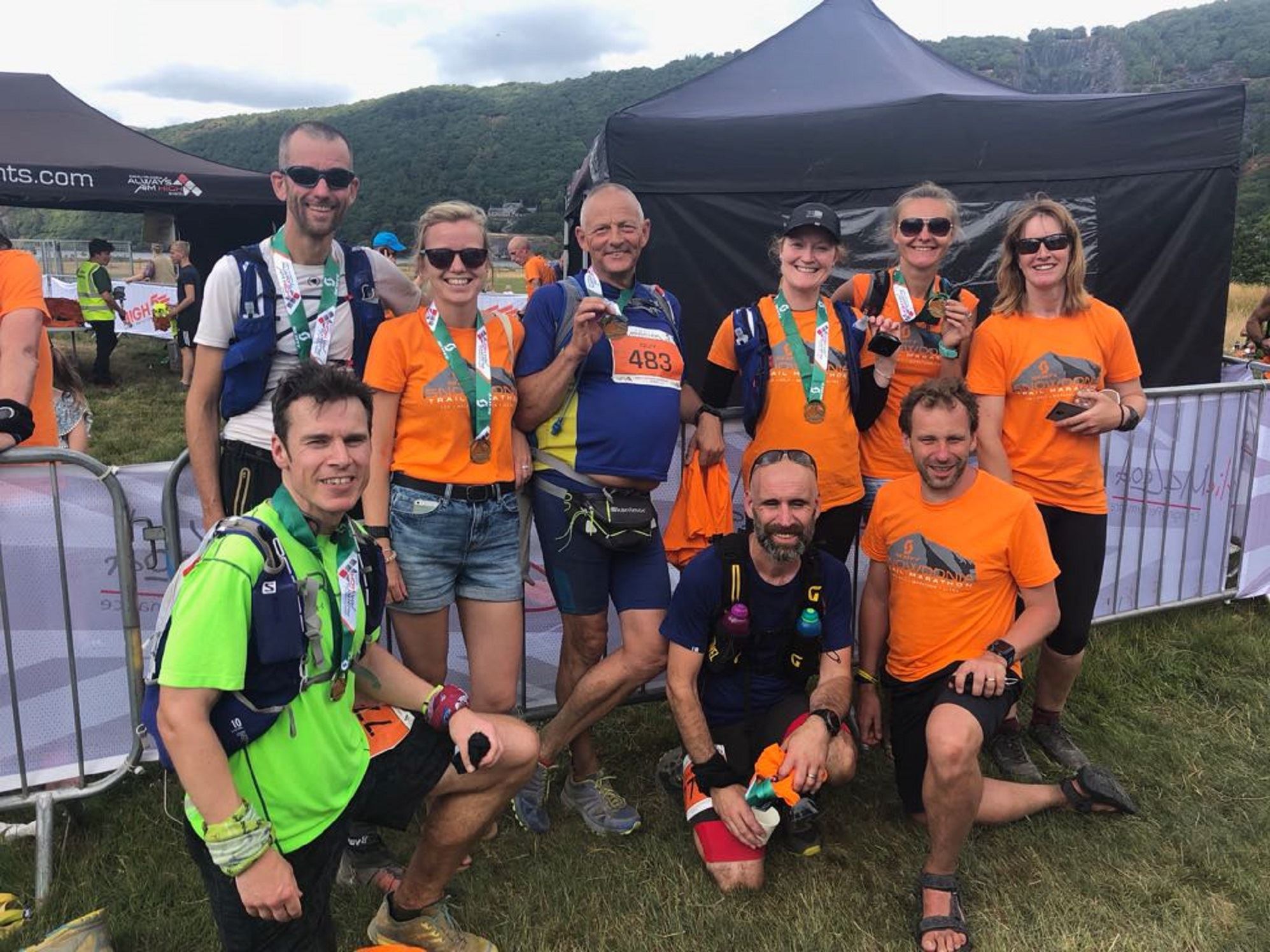 Those that did the Half and 10k took the pictures as we crossed the line.

Yes, Steph had finished the 10k by the time we got back so didn't need her Head Torch, in fact, she did very well and was 6th lady overall and 5th in her Age Cat, Steph was also first lady over the line for the Club, an outstanding run.

In the Half Magdalena was first over the line for the Club, the Half took the same start as the Full and then peeled off to the left and then climbed up the other side of the Town also with some stunning views. 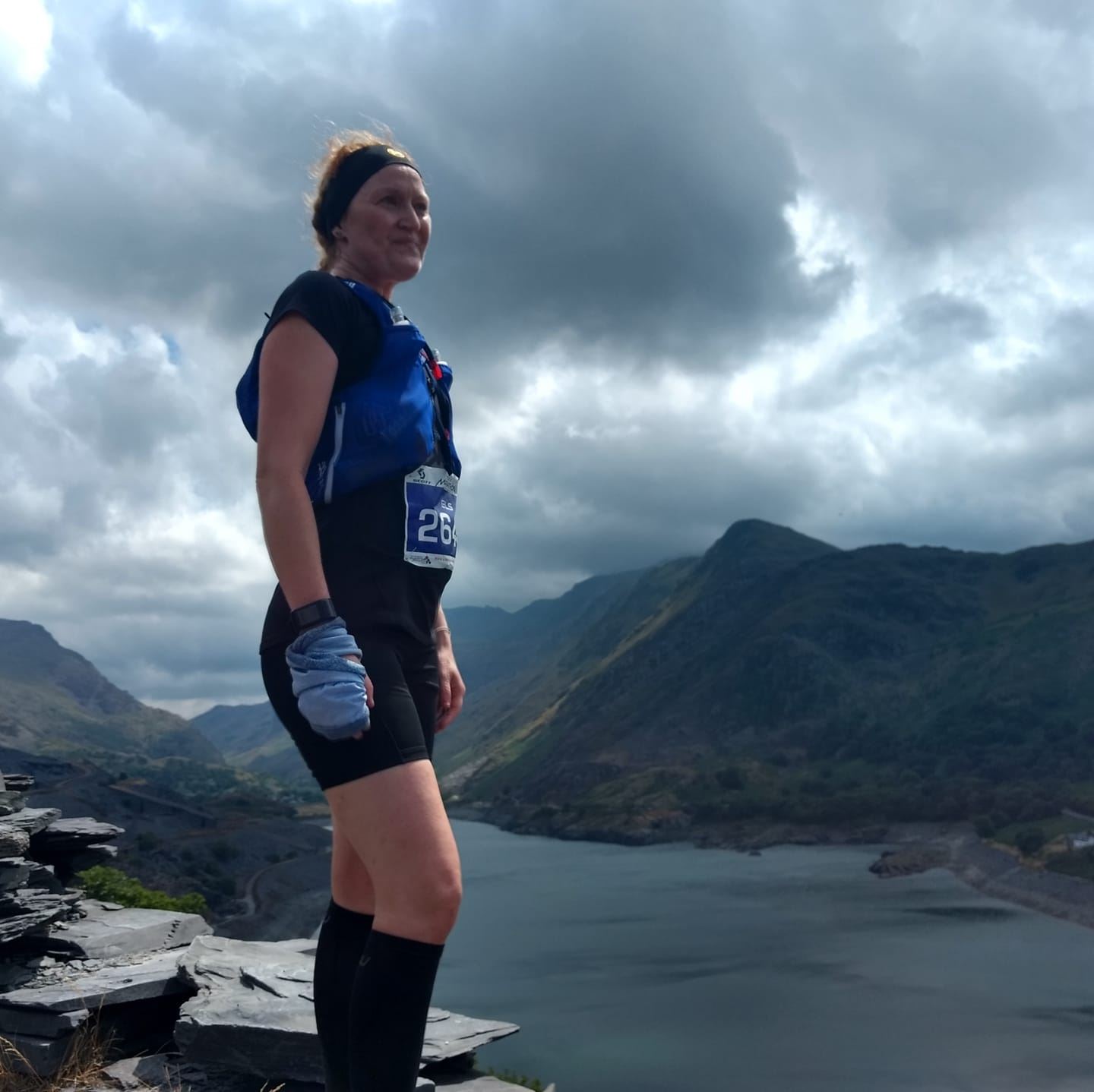 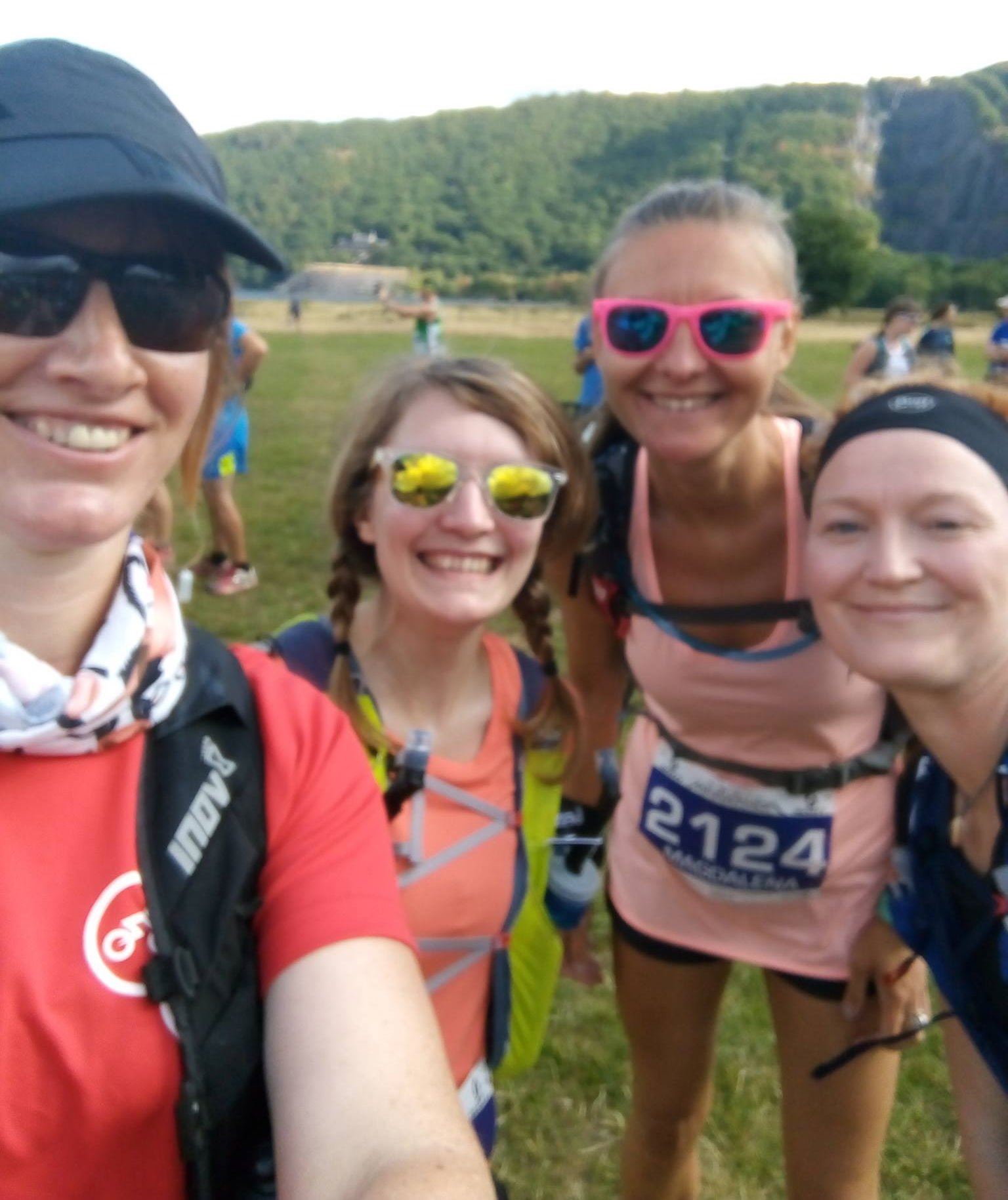 Thanks to Rob and Gary who shared the driving on what was a great Club weekend in North Wales with loads of laughs and really enjoyable few days. We are already planning next years so if you would like to give it a go please come and join us. Thanks to all those that made the trip, just try and work on your singing oh yes and Table Dancing.

Well done to Tim Willis and Rebecca Burton who completed the Lulworth 10k with Tim first in his Age Cat.

This is getting a bit of a habit - my last 3 races have seen a 'duo' from our club. James Hutt and myself at Colmers Hill Challenge 10k today on the Symondsbury Estate. A super race and the Colmers Hill itself is a killer but the views from the top are amazing. I just had to stop and take a few photos. The organisation was excellent, the marshals very encouraging. General visitors were interested to hear about the race, so a very sociable event and would definitely recommend it as a 'to do' race for next year. Lovely medal and a goodie bag filled with 'goodies'. Bonus - I also got a spot prize of a £10 voucher to spend in one of the shops on site so bought locally produced marmalade and Chutney and some fever tree tonic to go with my G&T later. 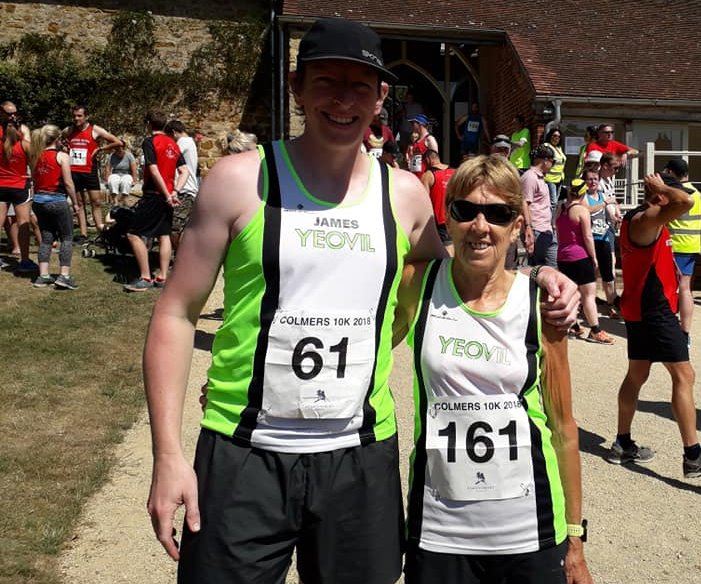 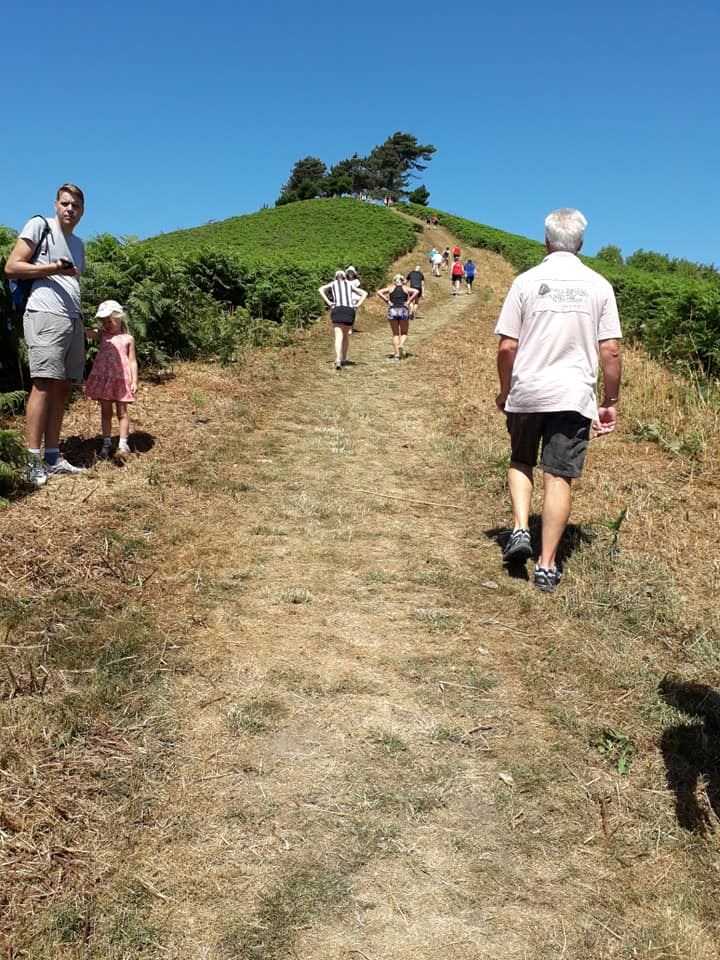 We had a few runners at this one. 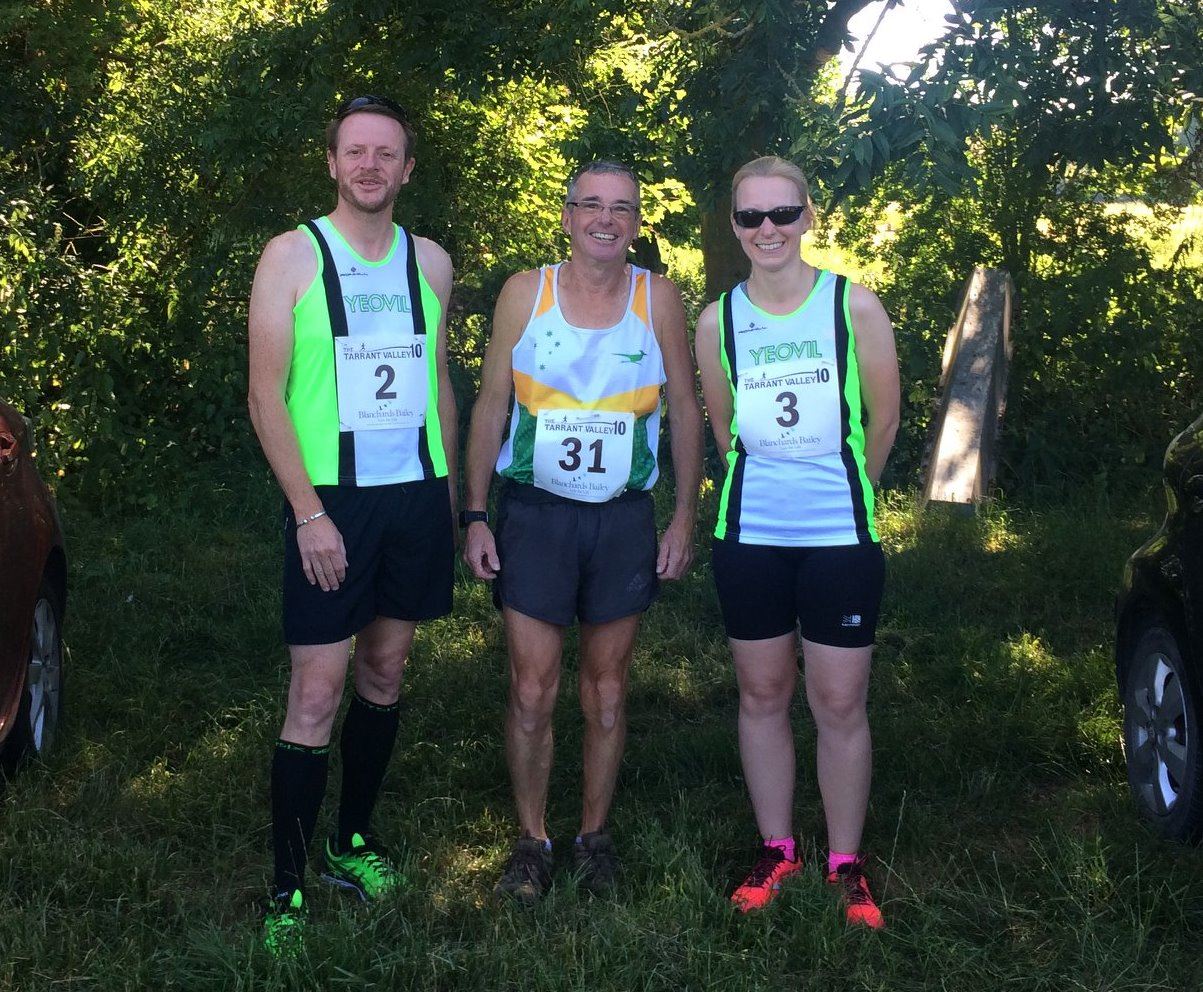 From Mark Pike: The ironically named Piece of Cake Marathon in Church Stretton for John Curtis and me today. It was a hot and lumpy two lap course over The Mynd. I got lost several times on lap one but thankfully managed to complete the second correctly finishing 4th overall in 4.43 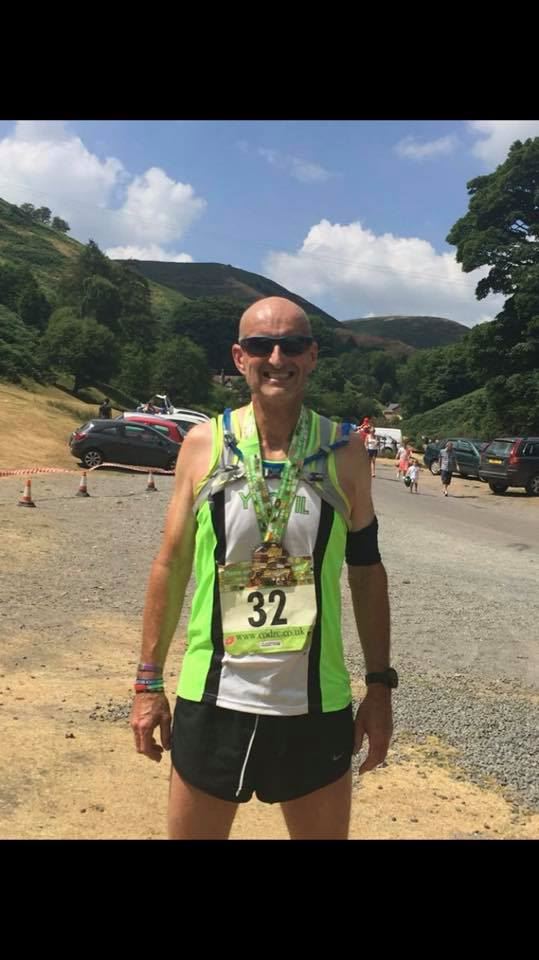 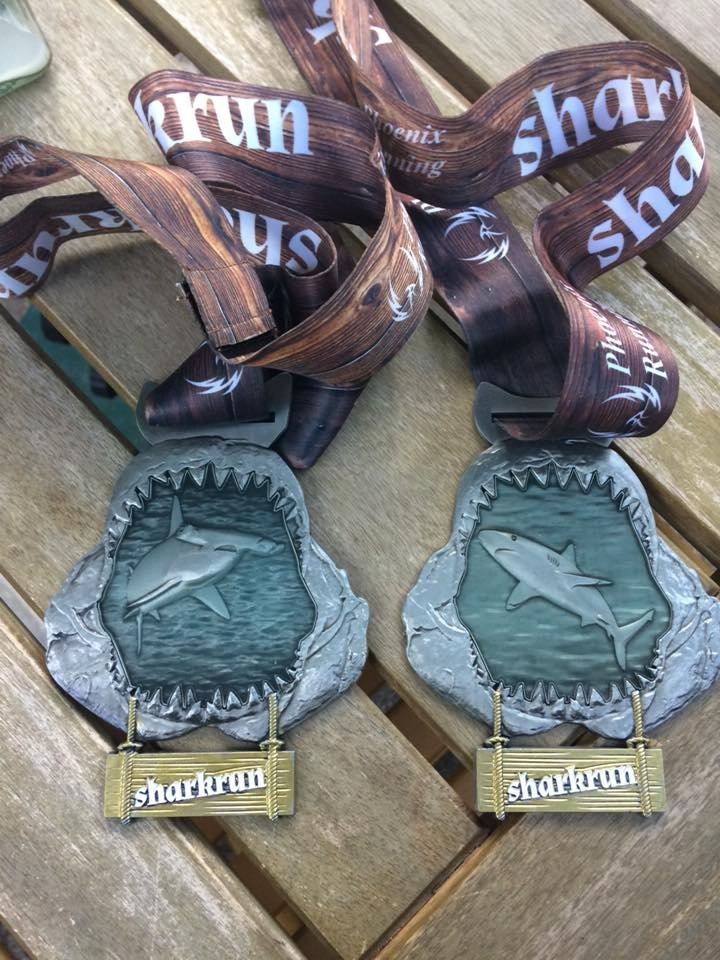 From Kat: A new 10k for Claire Hatherell and myself today. - Frome 5k, 10k or half marathon, I would highly recommend popping this onto your calendars for next year.
Very enthusiastic organisers, course well signposted for distance splits, great marshalling and the support from the people of Frome was amazing, jelly babies, high 5’s, plenty of water stops and lots of hosepipes to cool us down. I held Claire back a bit, suffering from a dodgy tum 💩 but we stayed together and did it in about 1.01, official times not out yet 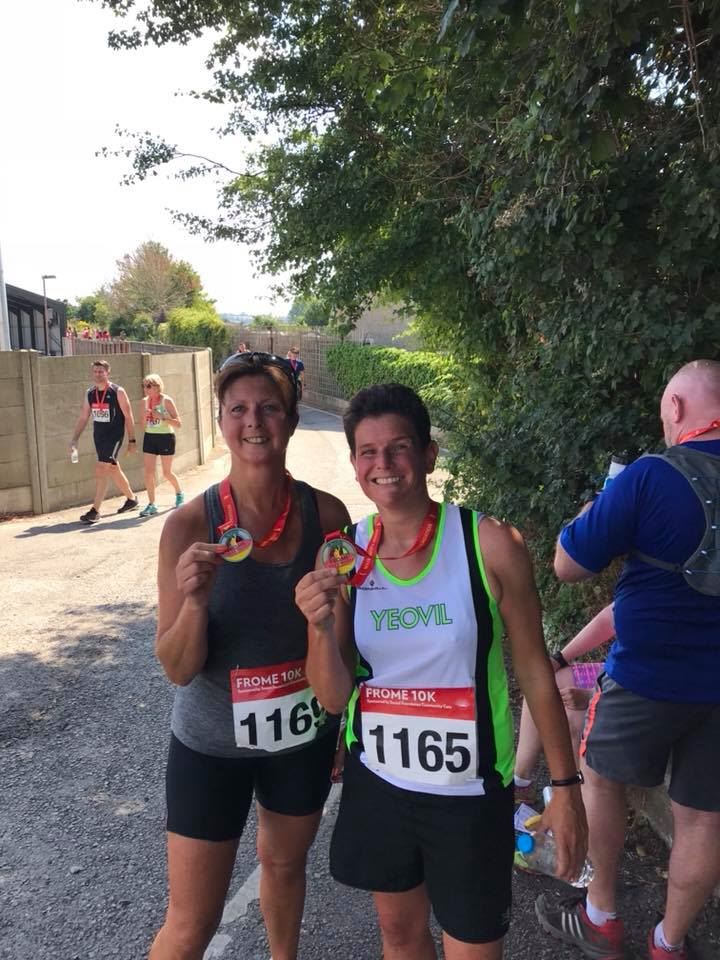 Thanks to all that helped on another nice warm day with a certain football match on as well. Numbers might have been down but still a good turn out. Two more to go. 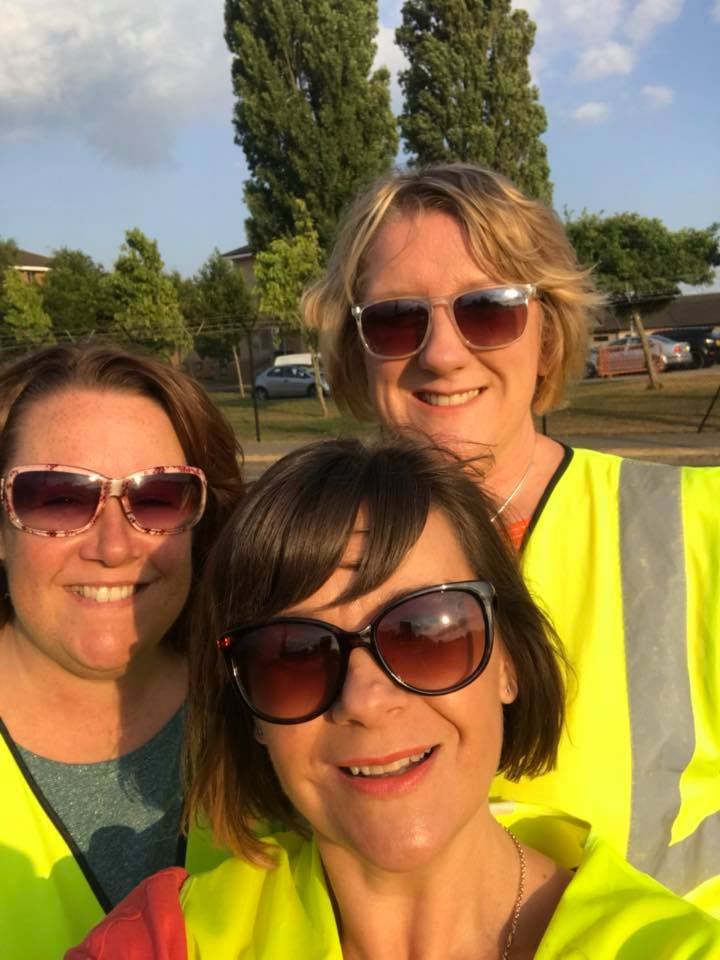 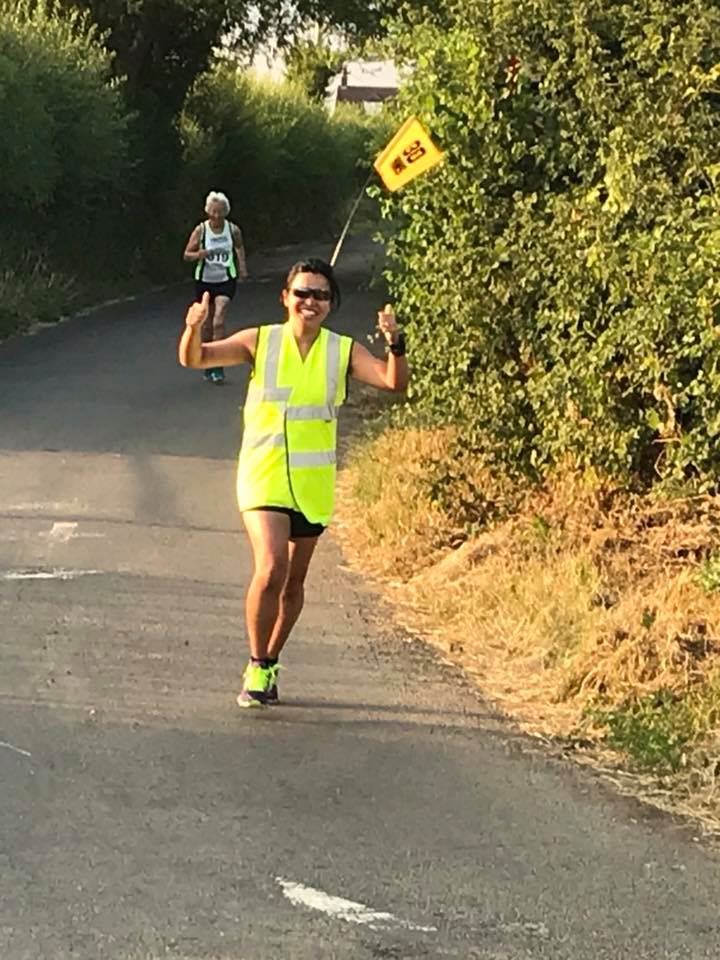 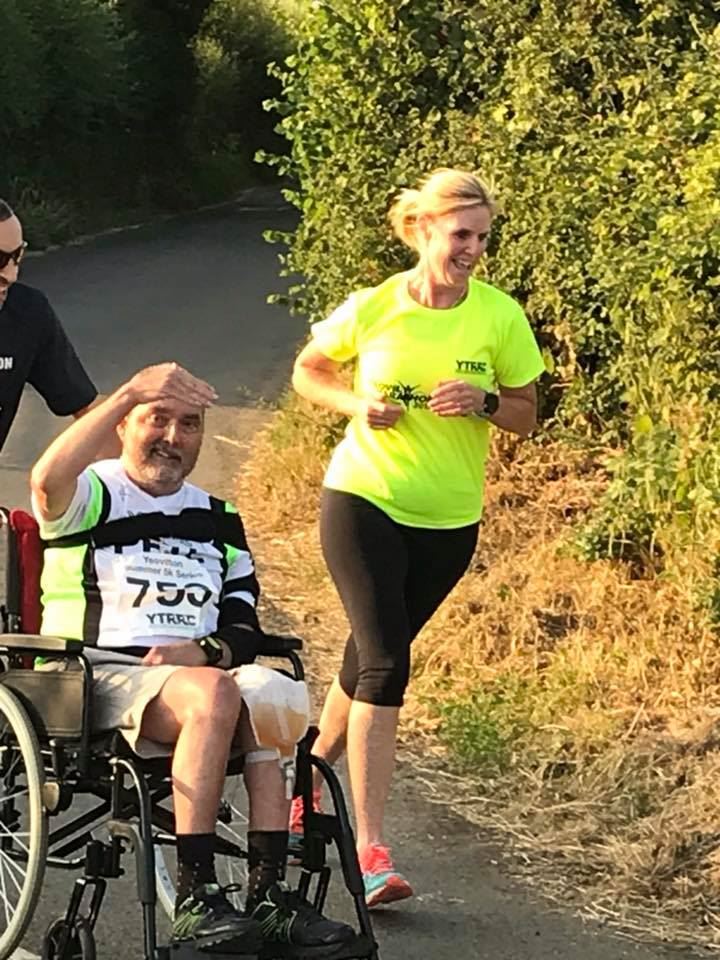 Thanks to Denise for sending this picture to the Gazette and they actually printed it. 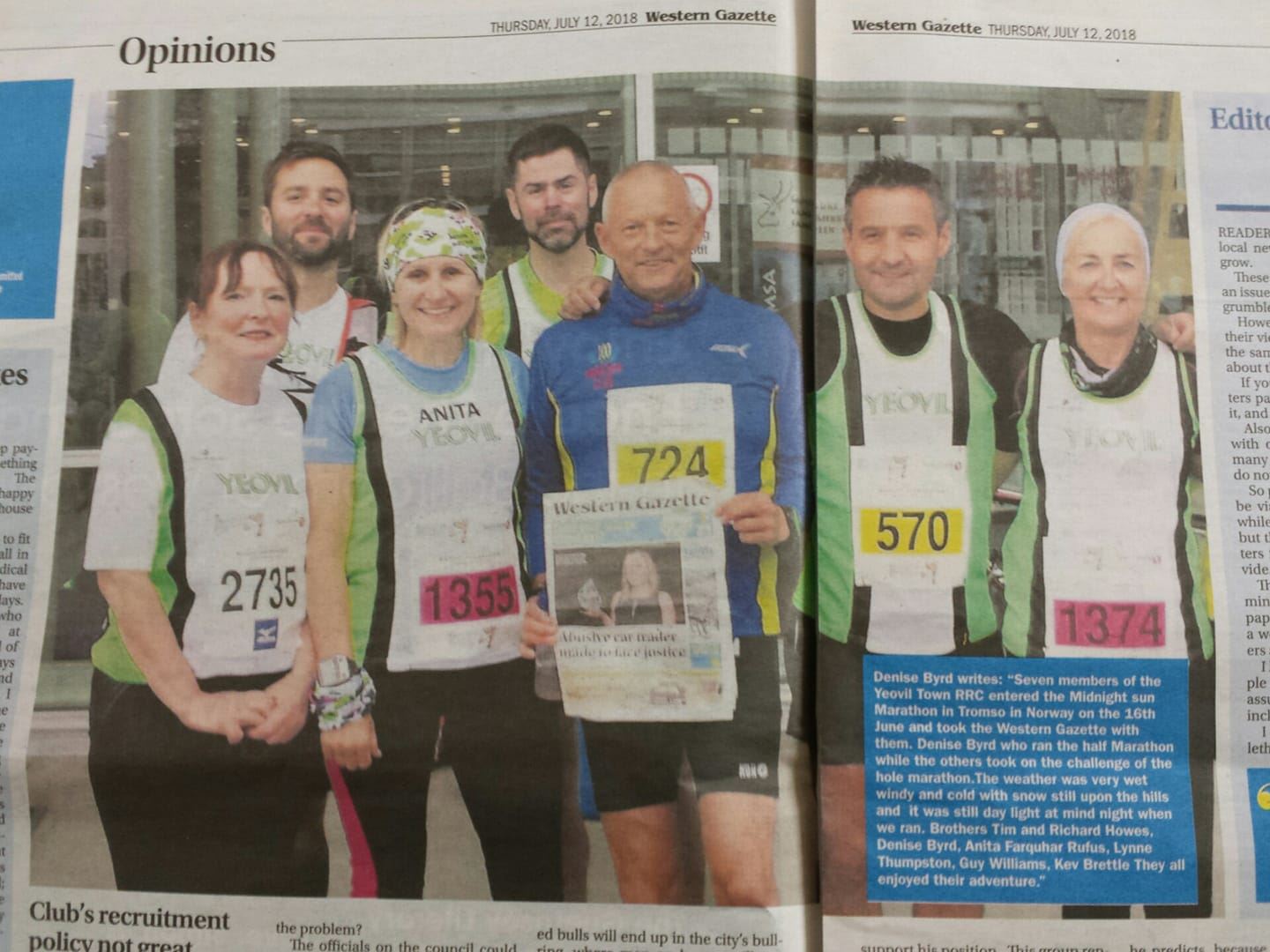 PUB RUN – OVER STRATTON (12th July 2018)
Cooler than of late, Gareth organised and led the Pub Run tonight. We ran a clockwise loop, through the village and out towards Lower Stratton. A Buzzard was perched on top of a telegraph pole just as we turned right to run the Parrett Trail route. We continued across several fields with stingers out in plenty. At the Pig Field, we stopped for the photo shoot. Further on a second Buzzard circled up above. We turned right and ran down dry stony muddy tracks (Garstone lane and Eggwood lane). We turned right to run across fields. Another track and more fields took us to Lopen. We ran a loop around the back of the village and up a hill to the Roman Road (Fosse Way). We ran towards Broomhill then went off-road running through apple orchards. We came out onto a lane which took us into Over Stratton and back up to the pub. The route was mostly a repeat of another time. Great conditions for running with good company made it a memorable Pub Run. Thanks, Gareth and all. 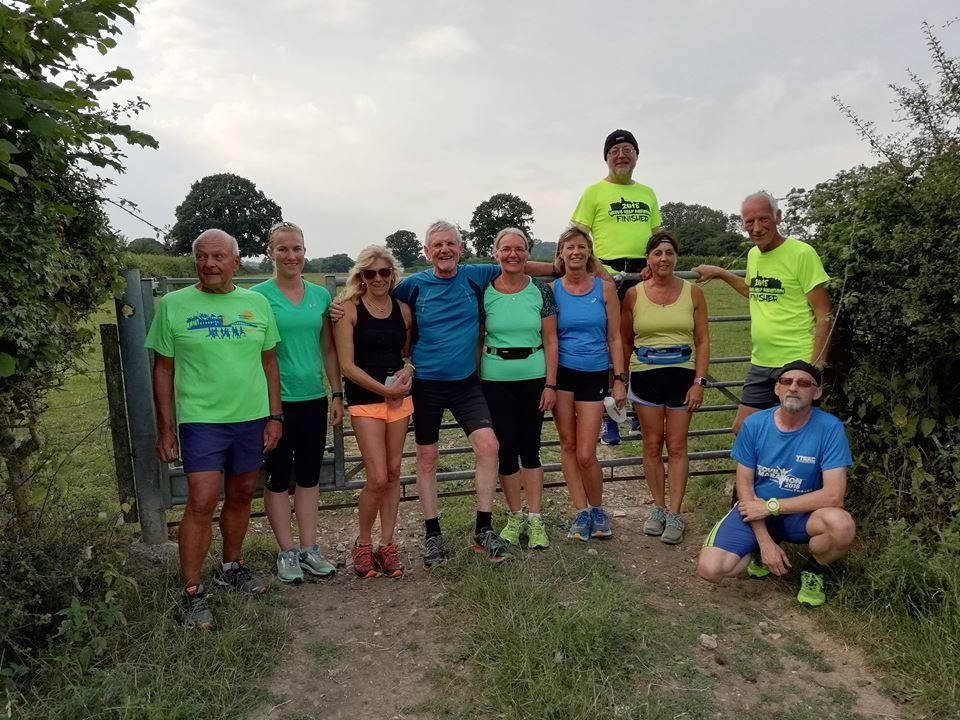 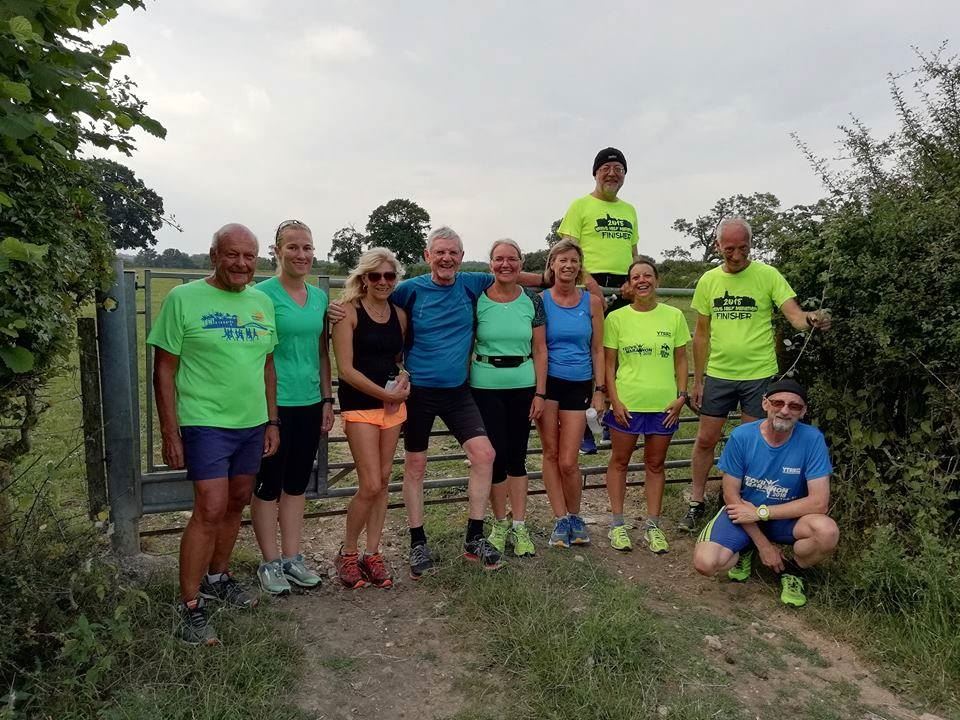