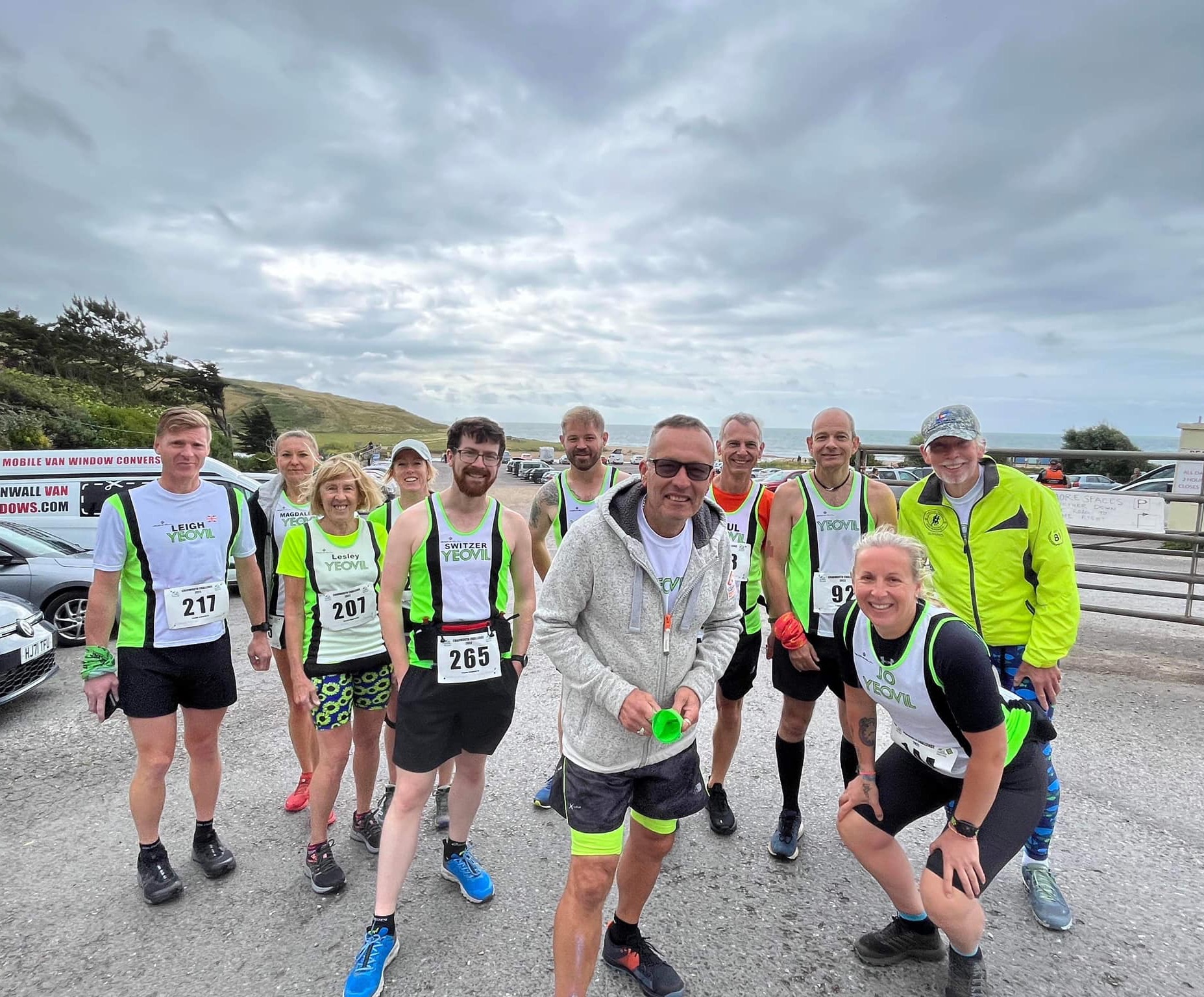 From Matt:  Portland 10 reared its head today, and its a good race. A big lap done to the Bill, followed by a smaller lap round the town. Not exactly hilly, but definitely a long slog up from the Bill.

After an exciting7:00 minute mile downhill, Paul Gilbie overtook Matt Driver, Joanna Henley was tracking us in style, and then Dominic and Sarah weren't too far behind. The long slog up form the Bill took its toll as the warmth of the day grew: brilliant sunshine down there!

As Paul disappeared into the distance Matt re-assessed and came to his senses. Completing the first lap of 6.5 miles, he recognised "issues" and decided to call it a very painful 2nd DNF of his career. Confusion reigned as Paul completed lap two and found Matt at the finish, but NO, he was first YTRRC. Joanna Henley was 1st YTRRC soon after, and they started on 99 ice creams - well Paul and Matt did - as Dom and Sarah came in to finish, without his glasses Dom thought Jo was eating chips. Easily done as she had a punnet of SIX scoops with biscotti crumbs all over!

The trip back took ages due to road works on the causeway, but to cap it all, Matt has just tested positive for Covid - Sorry everyone, but I was negative on Saturday 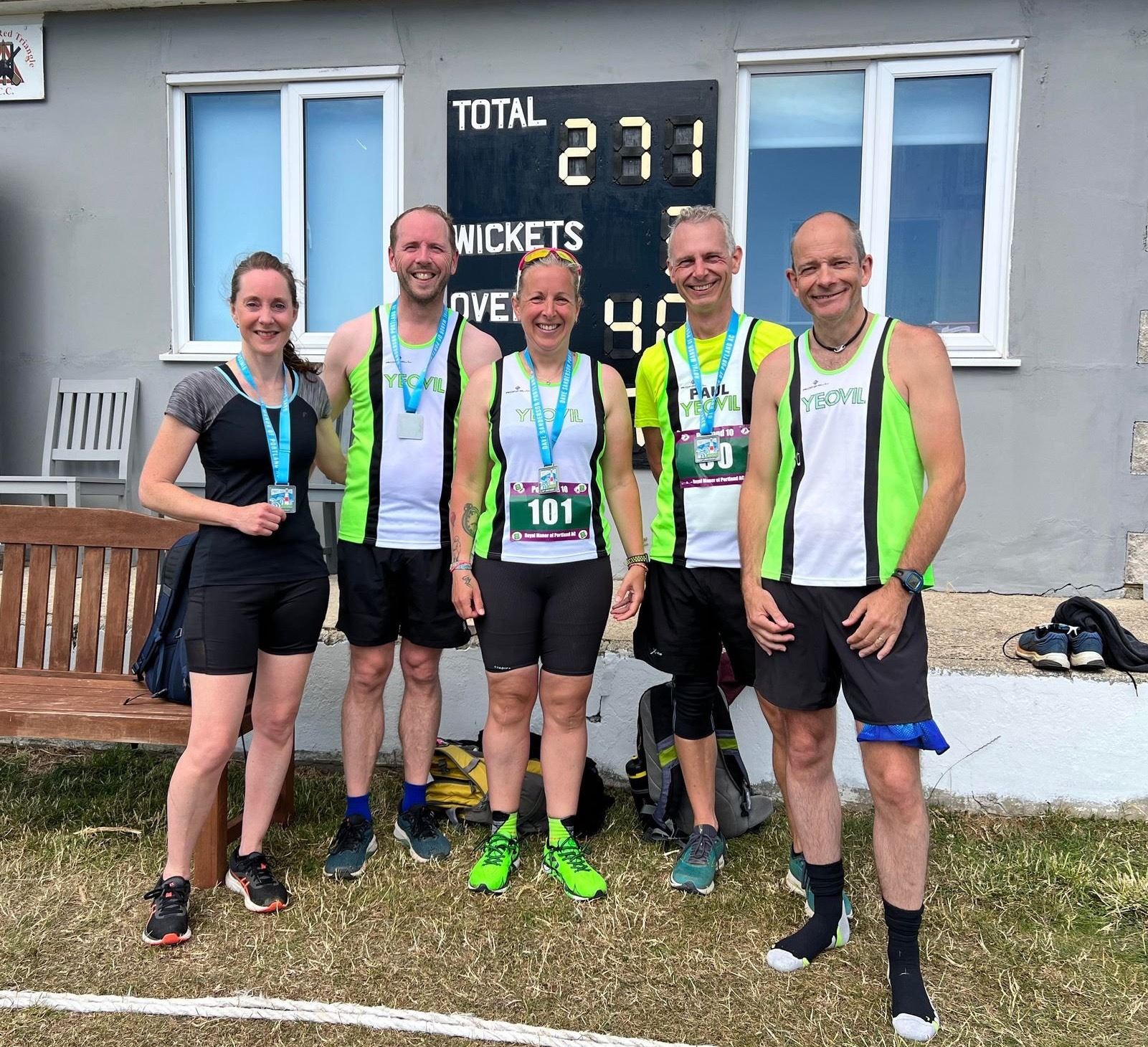 From Denise: Who's going to the 40th anniversary of the Yeovil road running club on the 8th July 7o'lock -midnight At the Quicksilver Mail Yeovil. We need to know numbers quite urgently for the buffet food so please book.Old and new members are welcome. Current members go free non-members or old friends to the club there is £10 fee. Add your name to list down here if you're non or old member and would like to come and celebrate with us.

I have to notify the Quicksilver Mail pub tomorrow Monday on how many people are eating for the 40th anniversary on the 8th. So can you make sure your name is added to the list if you have not booked yet and please let me know if have any special requirements for food ie if your vegan vegetarian or gluten intolerant .Thanks x

Ham to Lyme and Back Again

So we had a few Club Members running this yearly event with two deciding to run back to Ham. More on this later.

We ran, ate , walked, ate, ran ate, walked.....about 13 hr 57mins. We had minor blips 4 times as we took wrong turns but didn't dampen our spirits even though the weather was tad damp. When you are running for long it can happen just like Cameron Groves last year. Hence we ran 62.4 miles instead 60.22. If you are attempting 100k please do reccee all the way!

I confessed many time to Jac that I love her and I got my love back each time after few colourful ###*!! It was a real boost when we started passing the 50k runners and saw our friends even though we got called nutters! Thanks Paul Card ( Well you asked us how we felt). Honestly, seeing our friends was the best part. Well done to everyone. We'll be more sensible like you guys!! We started with big smiles, ran with smiles; finished hand in hand with the biggest smile and relieve!! More importantly Jac Casey and I are still friends. Jac said I can message her till today.

30 runners had started at Lyme, I hope all 30 people finished!! We do not know how many girls but we were joint 3rd ladies( Jac made me look good again to finish next her) Special thank you to Frances Malin , Nathan Gardiner for following us and checking how we were doing and your encouragement. Thank you Graham Still having all our stuff and wait for us at Ham Hill . Thank you Richard Clayton for medical help( not a single blister on my feet!) Thank you Vicky Rosewell for making flapjack. Thank you everyone for all our kind messages and encouragement. Timothy Hawkins I will make you say after the next track, there are no more miles to go!! 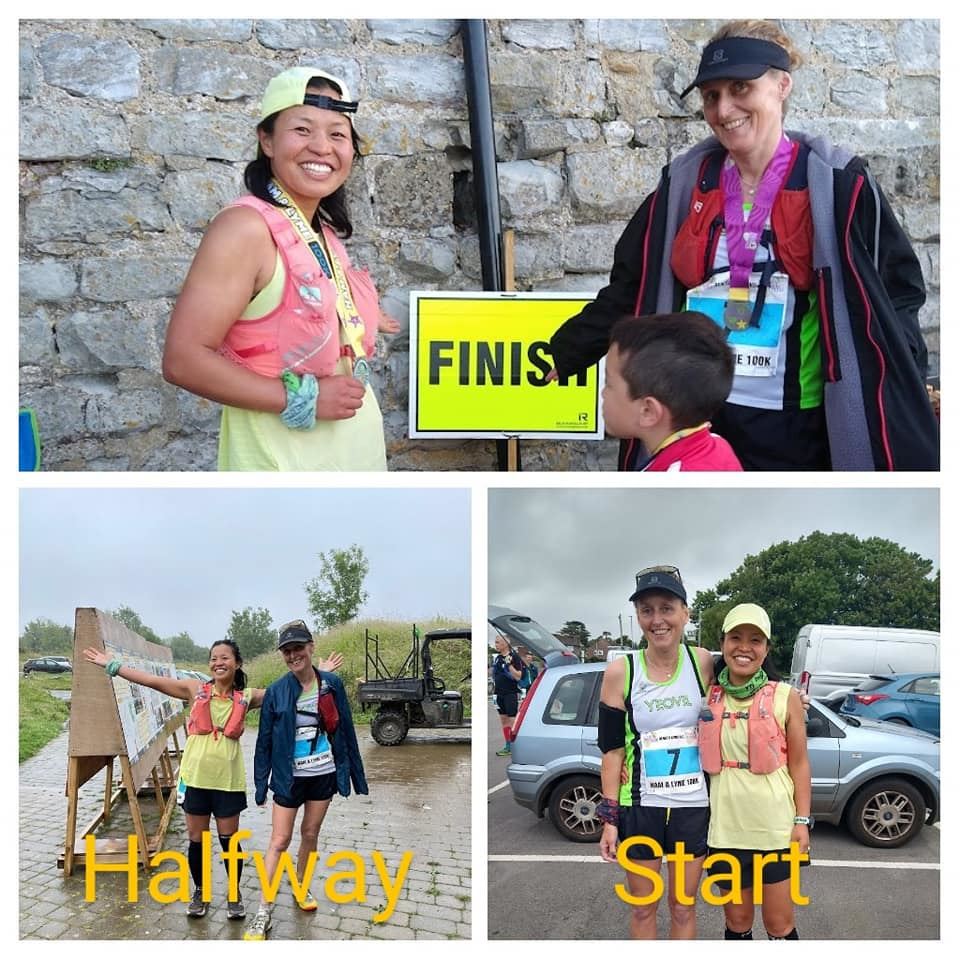 From Steve: Kate Gowers and I ran Ham to Lyme together today. A tad hilly but “good fun” was had by all. Rather than treating Kate to a jelly baby every mile she had the pleasure of a joke at each mile - 30 jokes later sadly the run ended! (start and finish photos) Great to see Yunmi Jang and Jacqui on route running a crazy 100k (nutters). 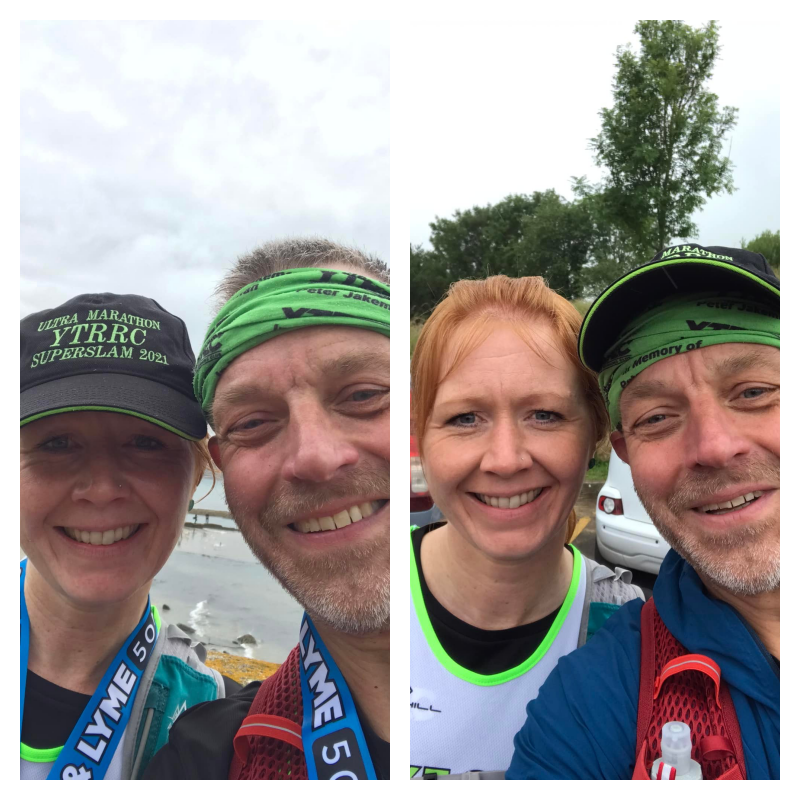 From Eleanor: New 50k pb for me by 1hr 41 mins at Ham to Lyme, happy with that! Brutal in places and only went off course once when we followed the 100k lady at the end before the stream epic race. Lots of rain and a bit of sunshine. Nearly joined a cider party along the way. Well done to all the other runner. 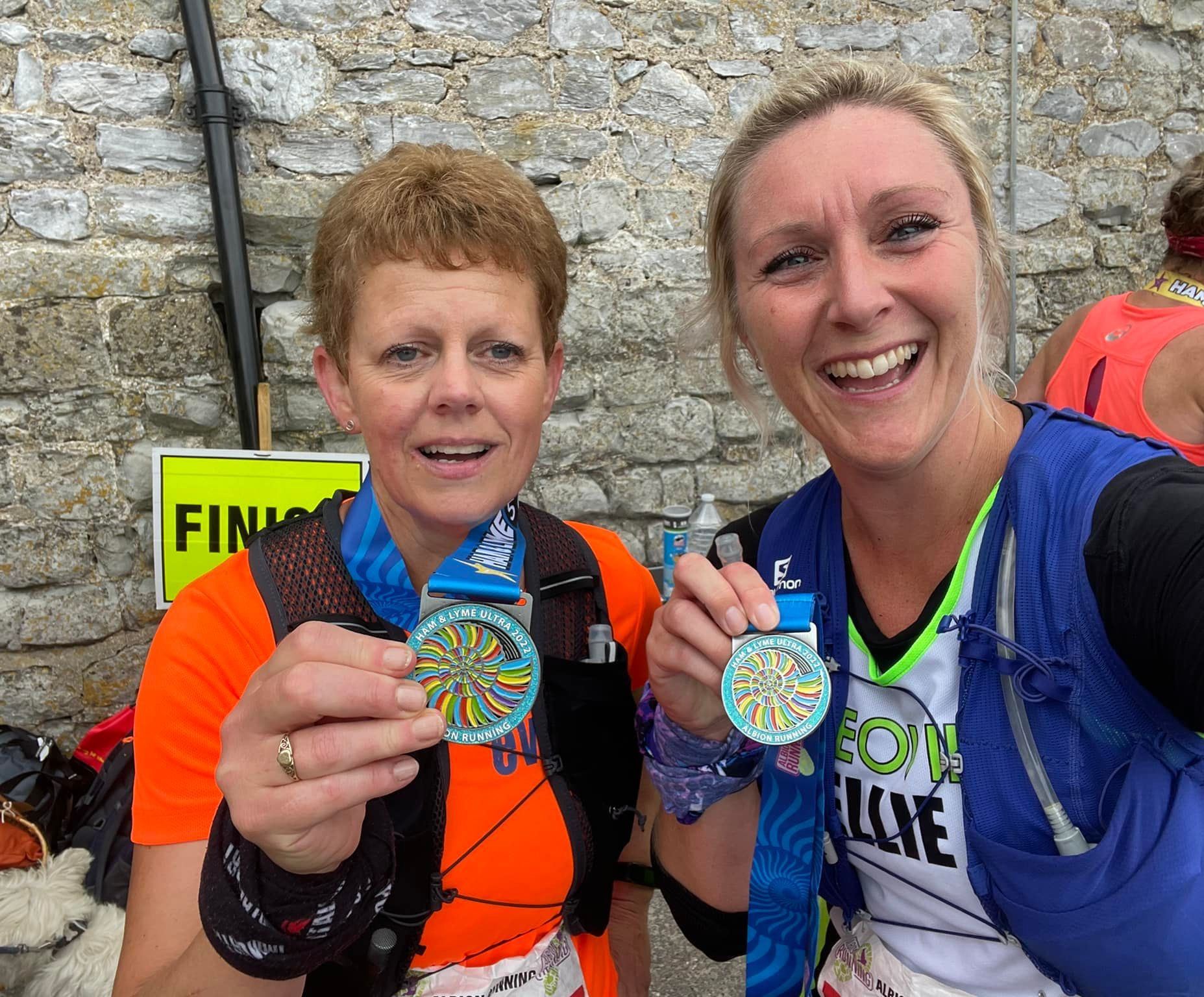 From Fran: I am very proud to tell you all that Yunmi and Jac were 3rd joint Ladies in the 100k Lyme to HamHill and back again. They smiled all the way and are amazing. 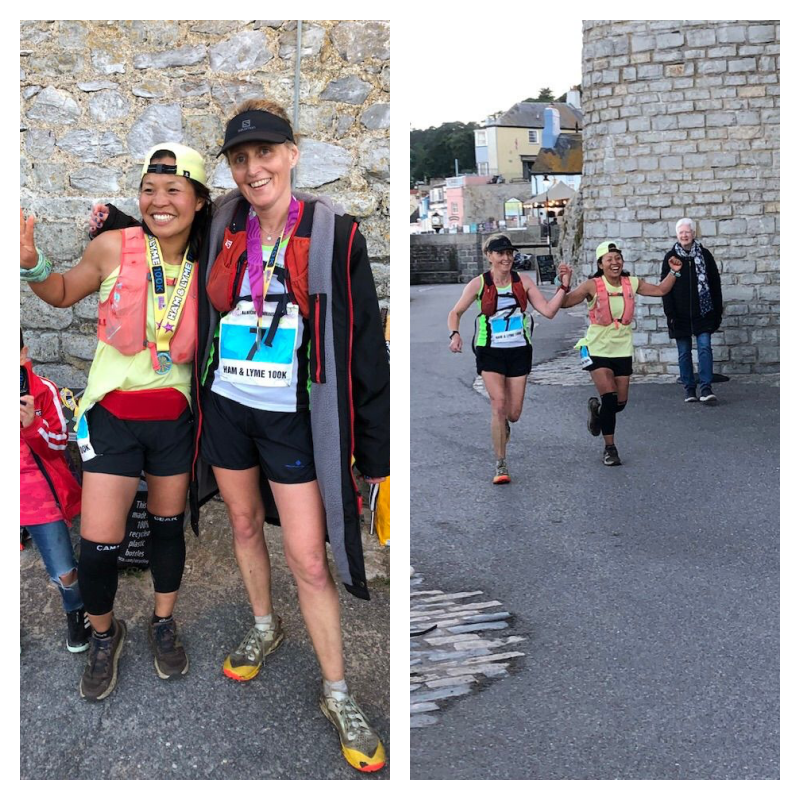 Well done the both of you great running

From Helen: A nice social run at Charmouth Challenge this morning! Thanks for organising Lesley Nesbitt (aka mum !). We were lucky with the weather turning out a lot better than forecast said but still not quite the sunny day we’d hoped for. Tough run for some racing and getting fab times, but a few of us just enjoyed running it as a social and crossing the line hand in hand..literally! Thanks for the great photos Alison Griffiths. 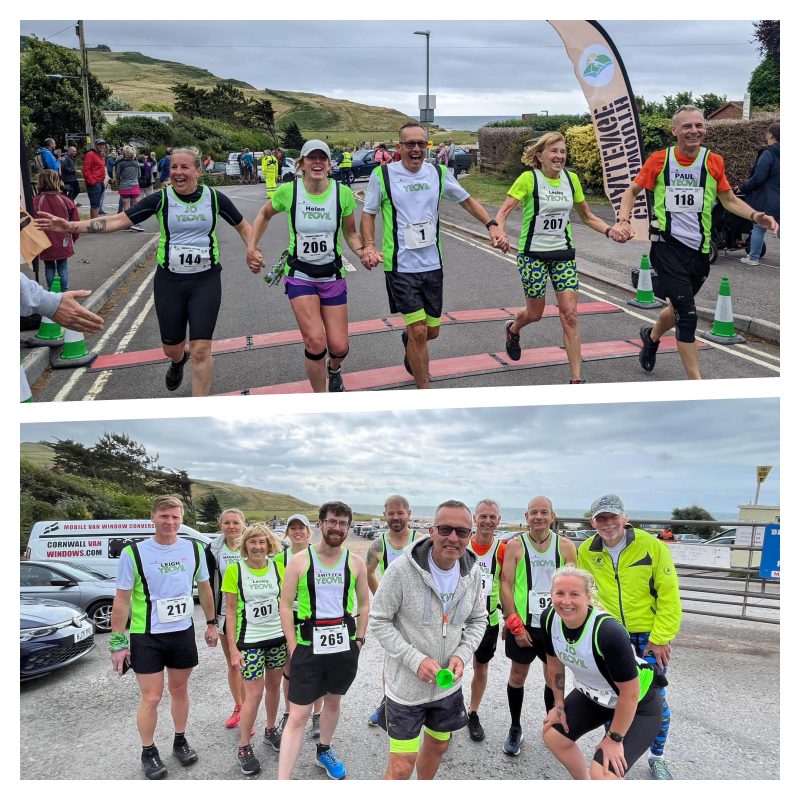 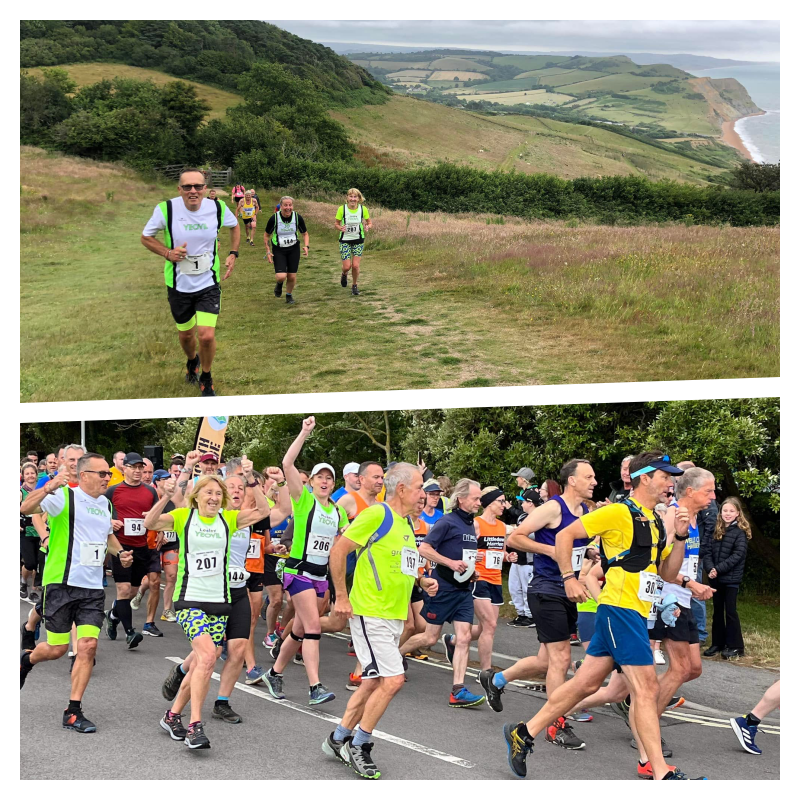 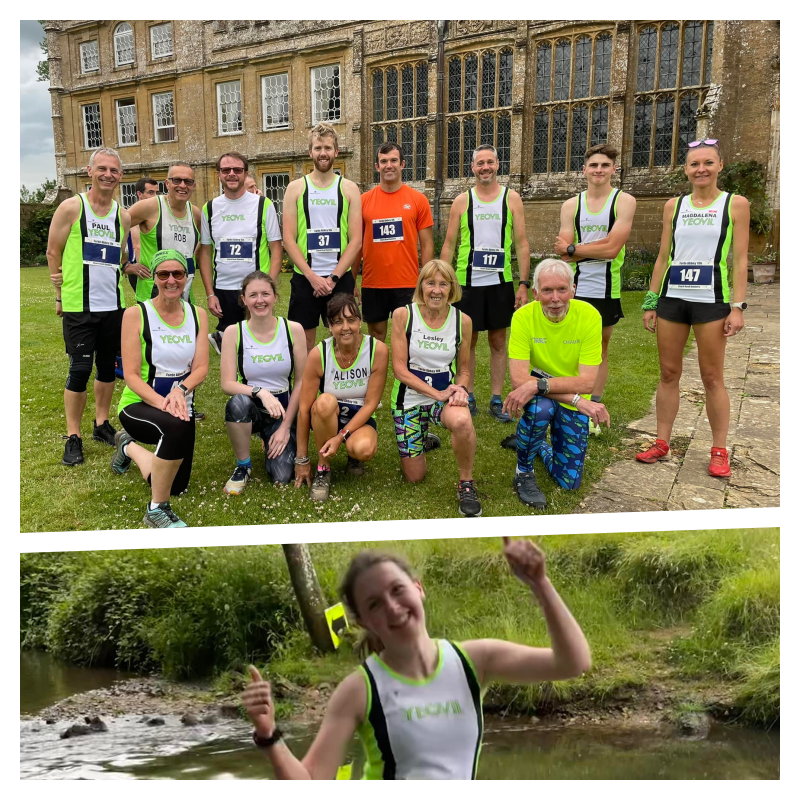 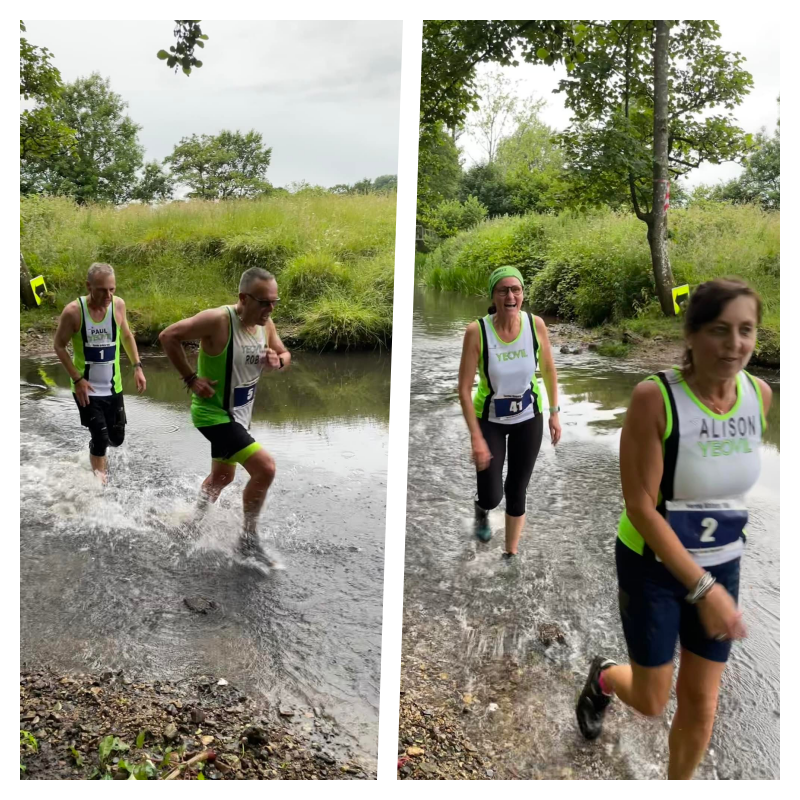 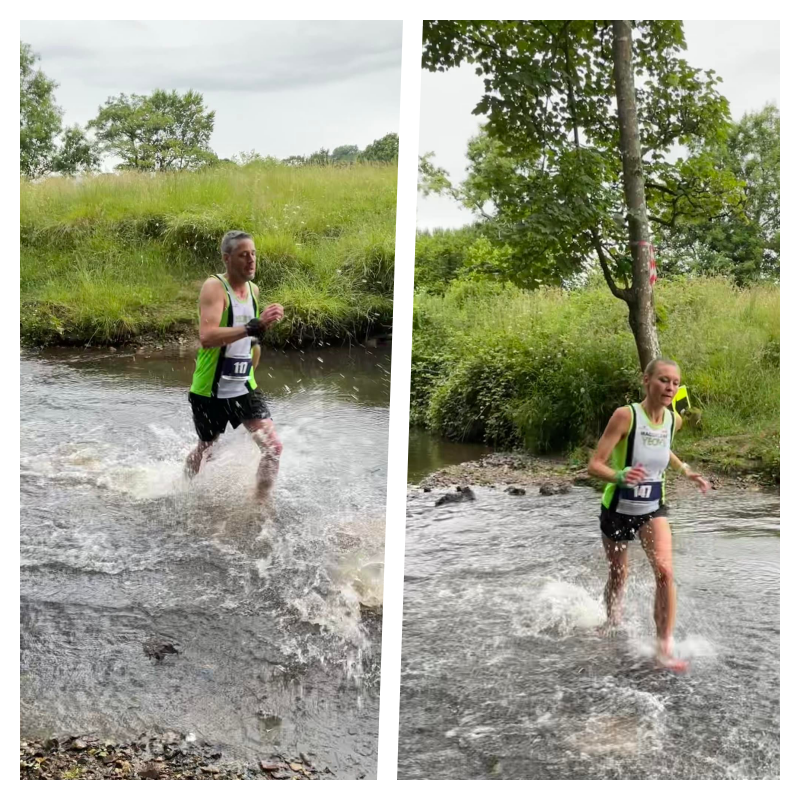 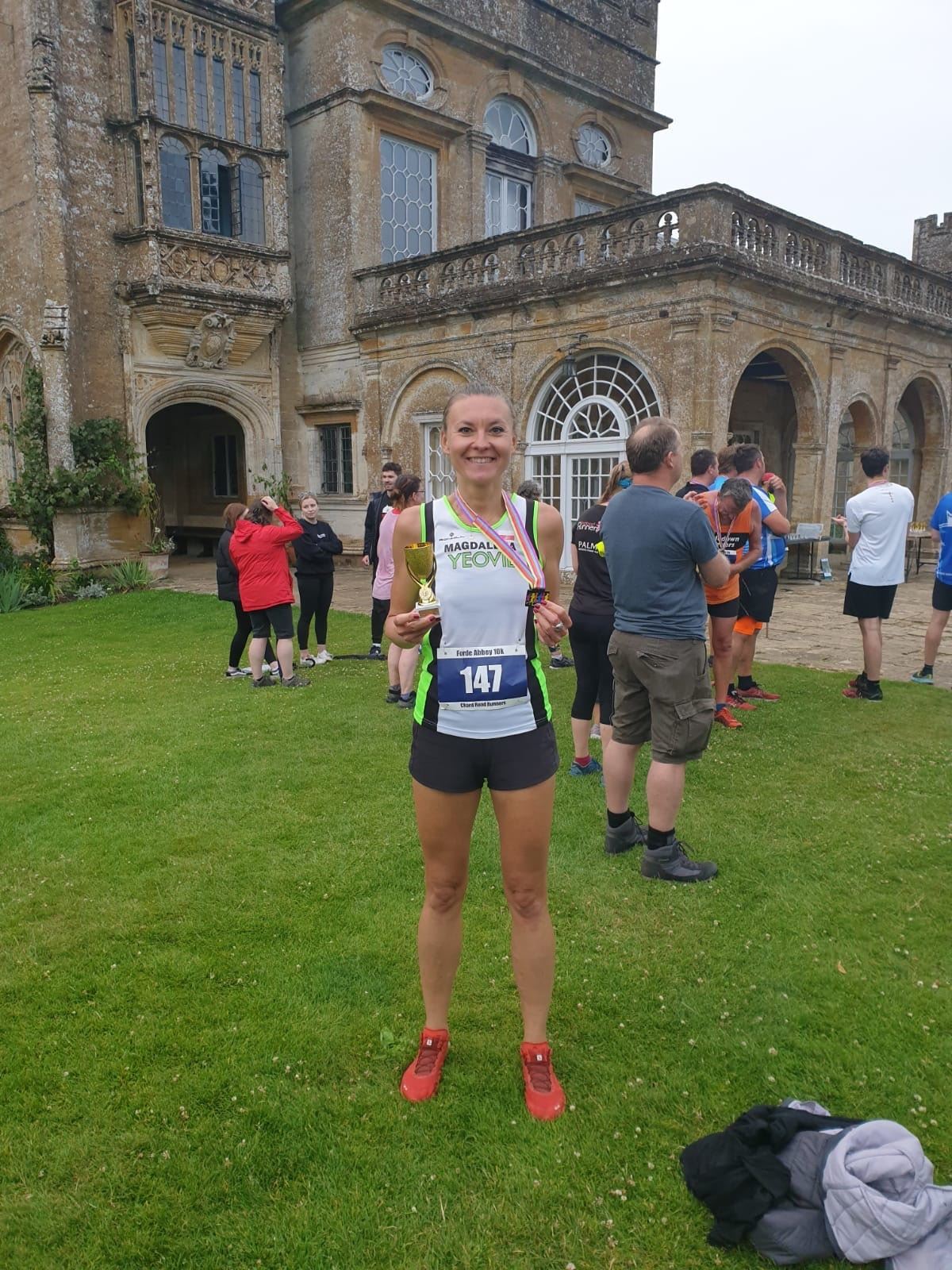 From Lesley: In the days before covid it became a tradition to wear club vests on the first Saturday of every month to parkruns regardless of where they were running . So now that lots of members are doing parkruns again it would be great if we could restart this tradition. It is good publicity for the club showing us to be a friendly club of all abilities.

From Mark: There was no faster group tonight. Sue led a mostly off road run with Rob, Alison, Rachael, Louise, June, Sue, Paul, and myself. We left the pub running south, turned right, and right again onto fields. We followed the Monarch’s Way crossing several fields, then followed the path alongside the A356. The path then passed the church at Chiselborough where we stopped for photos. Turning left and entering a field of cows who ran away for a change, we then ran north towards Blackspir Hill. Turning right we continued along the western edge of Norton Sub Hamdon, then came out into the village. We went left, then right, and followed fields west of New Road and reached Stoke Sub Hamdon, Turning right we ran along the edge of houses, crossed the road and continued off road. Turning right, we followed the path to the east of Norton Sub Hamdon and came out near the pub. We crossed the recreation ground and a field and came out on the road to Chiselborough. We decided to cut out a steep muddy hill and instead return by road. On the way back we passed the church at Chiselborough again, and descended back to the pub. Thanks Sue for your route and for leading. Thanks all, and Phil for organising. As always the pub meal after was great. 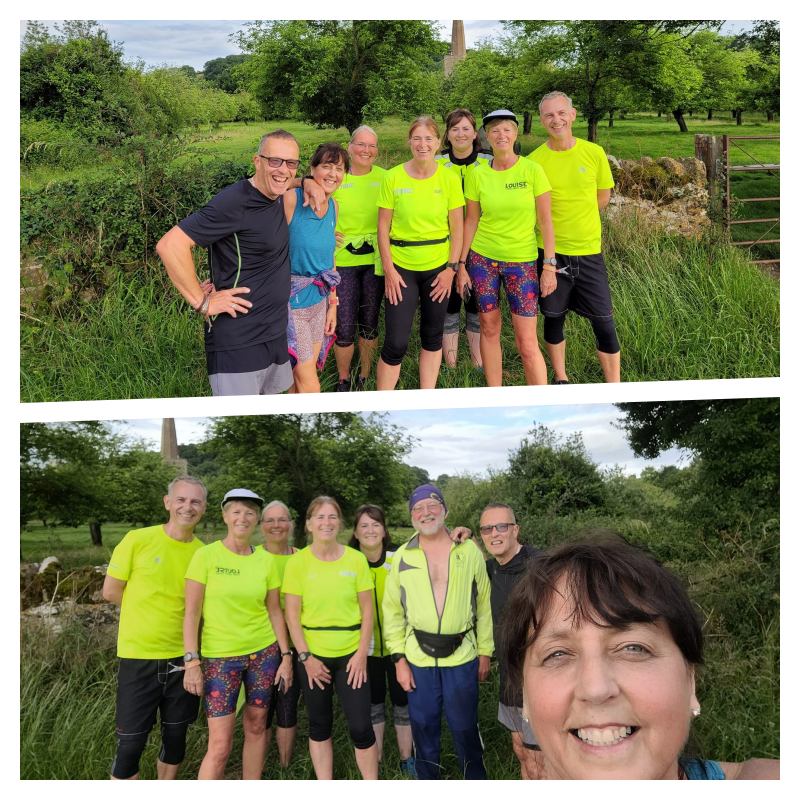