One Week to Go 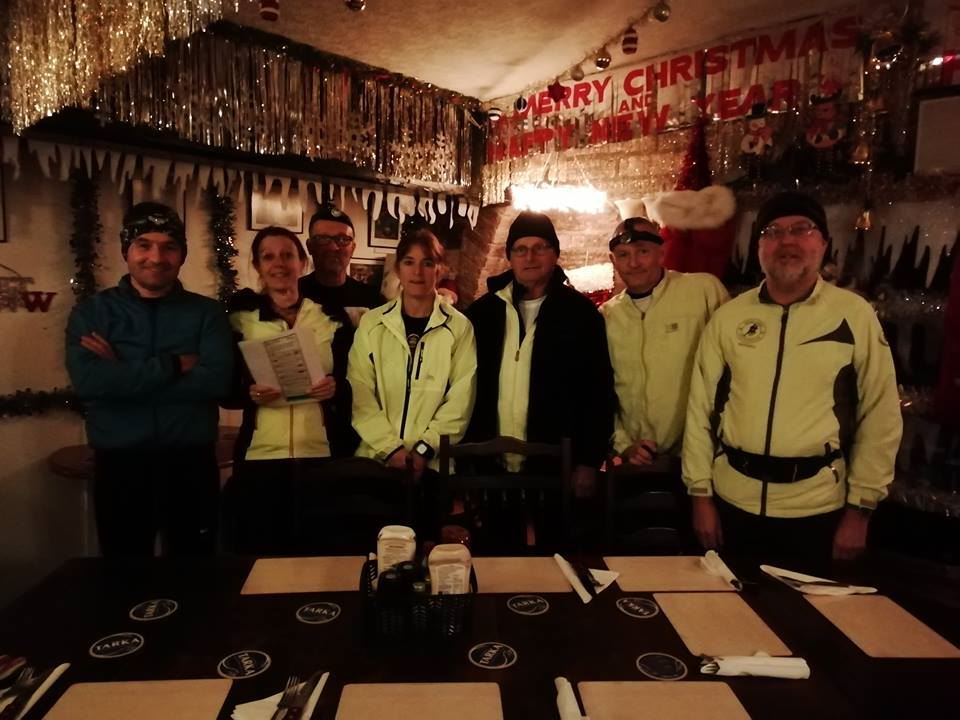 This has now closed so no more bookings will be taken.

From Lesley: Weekend of racing
Saturday morning off to Montacute Parkrun with Leo, my 9-year-old grandson. This was his 10th parkrun and has earned his first parkrun t-shirt as well as securing another PB.

Saturday evening I then went off to Run from the Romans 5 miler. There were several Yeovil runners, some doing the 5 miles and other mad ones doing the 10 miles. It was very slippery in places but I managed to stay on my feet! Thank you to Martin for the company and for keeping me going.
Sunday morning it was off to Brent Knoll for the final race of the Somerset Series. I thought I was going to be the only Yeovil runner there but then saw Lyndsay who hasn’t ever done this race before. She didn’t know what she had let herself in for! It’s a very tough race, although not as muddy as previous year but still very slippery struggling up and down the two ‘mountains’. Darrell Sheen has unfortunately been out injured for a while but had done enough races to qualify for a very respectable 3rd male place overall for the Series. I managed to sneak in the top 10 finishing 9th female and 1st in my age category. All runners who had run 8 races or more also received a t-shirt. In my car, I have a t-shirt for Katie, Jeff and Samantha.
Well done to everyone who completed other races this weekend. 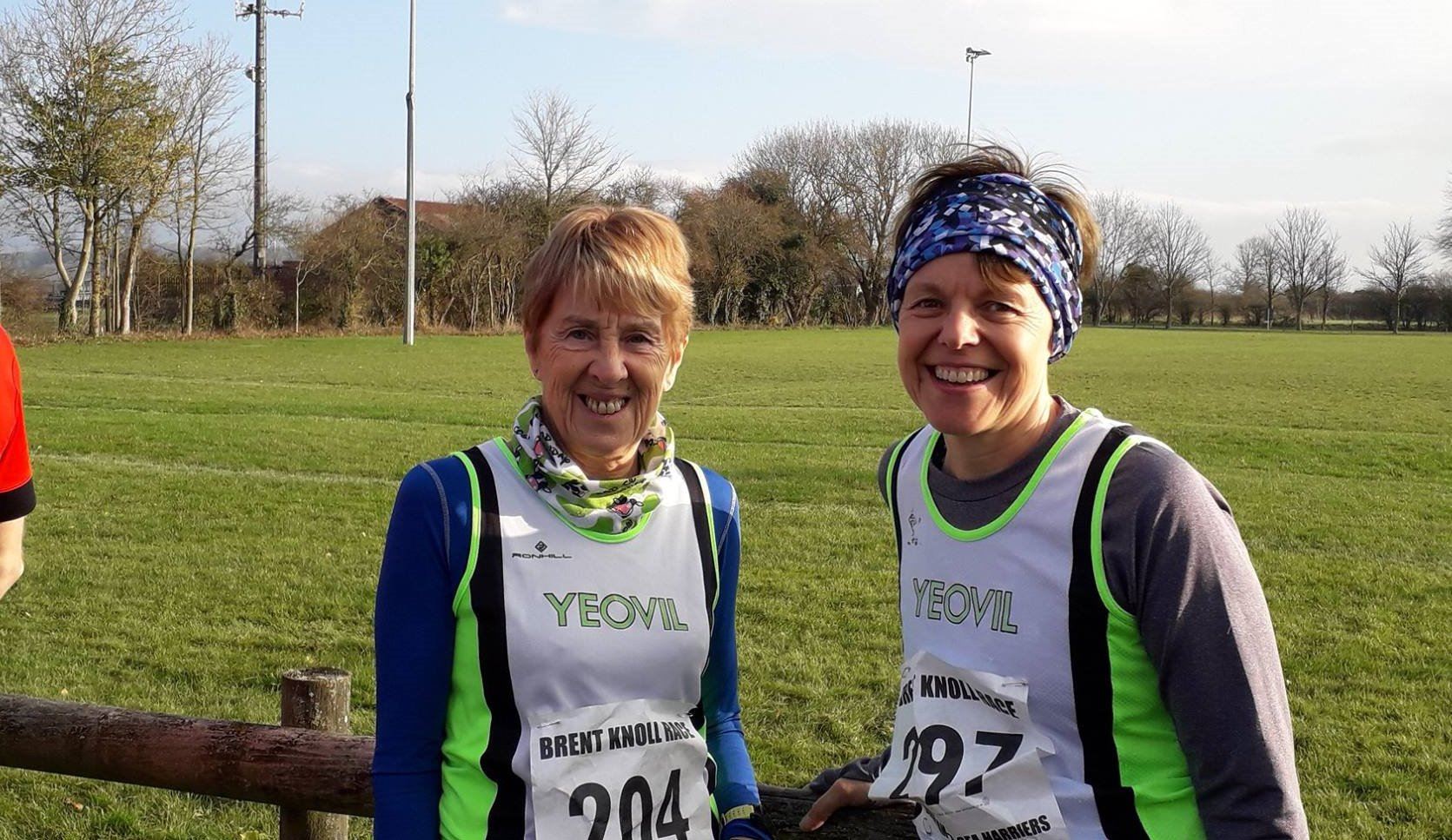 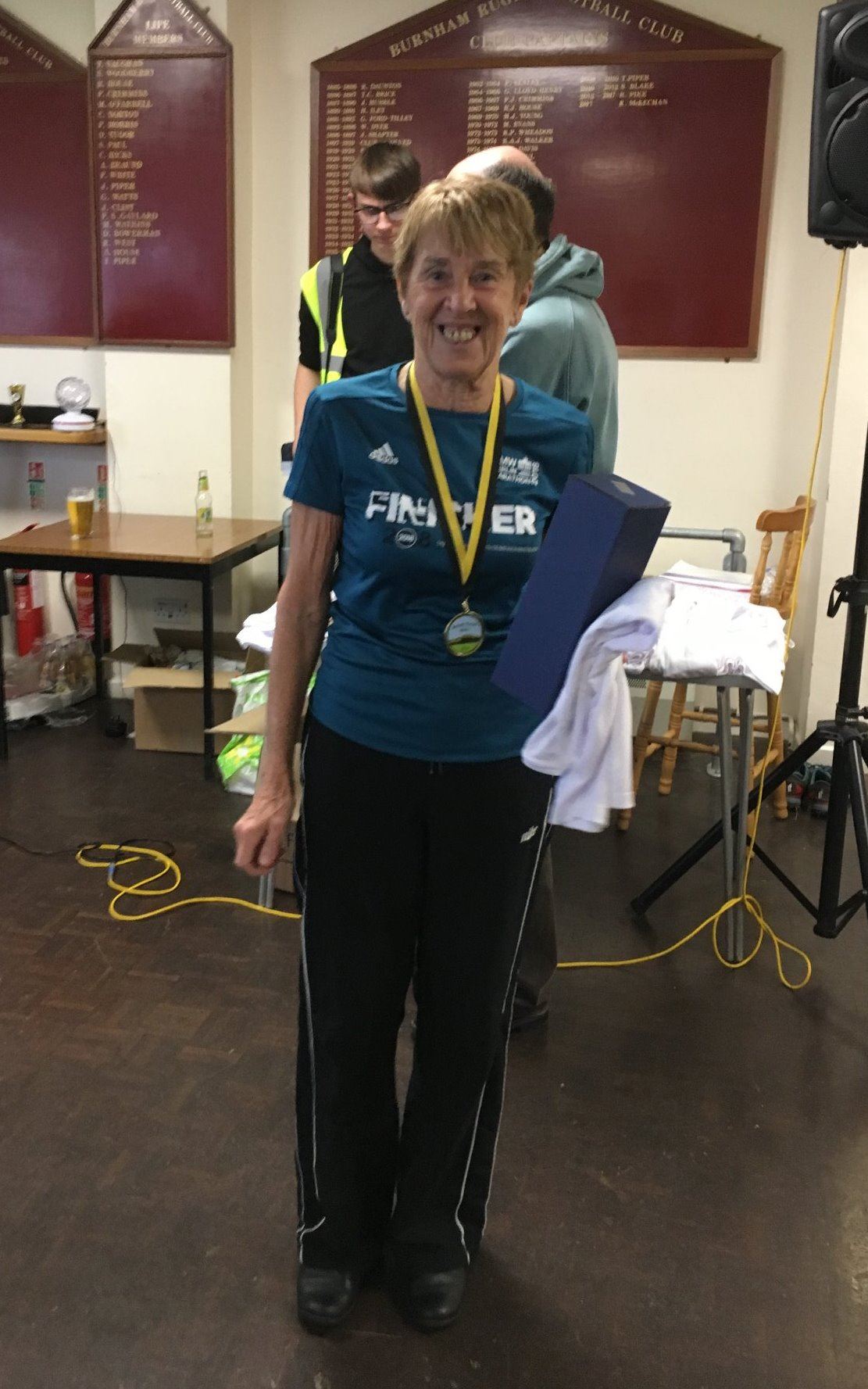 Can those that have ordered a Club Calendar and have not paid confirm they still want it? As I can still sell it. If you do still want it please can you pay? I will have them at both the Club Run this week at Goldenstones and the Pub Run. I will not take them to the awards night if you have NOT paid for it.
https://www.yeoviltownrrc.com/club-calendar.htm

I plan to this again next year and will start this in January so can I ask those that take photographs can you email them to me as you take them without reducing the size. Facebook reduces them too much. I might try to get a photo storage online that you all can add too and will post if I do.

5k race, my first in Mexico, to mark day against domestic violence to women. There were around 200 runners. I bravely entered despite my hangover and injury, both caused by last nights xmas tree decorating party. The race was due to start at 8am, so off we set at 8.15 (after the strangest warm up). I think they delayed the start so we would get the full benefit of the blazing sun that had just popped up from behind the mountains. It was a straight out and back closed road flat route. There was plenty of shade provided by lampposts every 50m. Back was even better with the sun in your eyes and an occasional palm tree for shade. On I sped motivated by the promise of shade/water/lie down and managed a pb (pb for racing in Mexico that is) of 28:48. 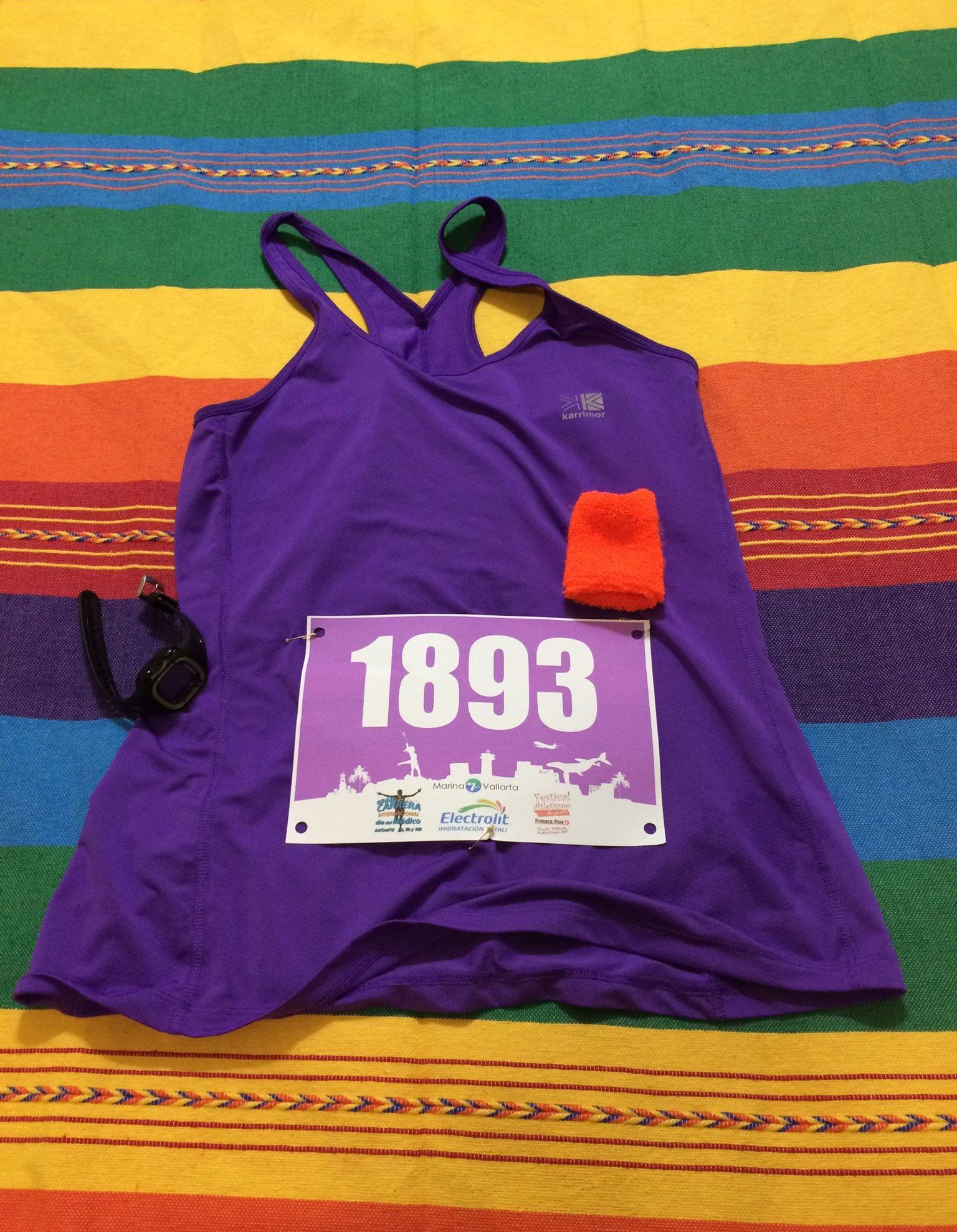 From Lynne: Hard day at the office or Samphire Hoe, Dover, thanks to these guys for getting me through it! Caroline's 100 tomorrow. The same route , we'll get it done! 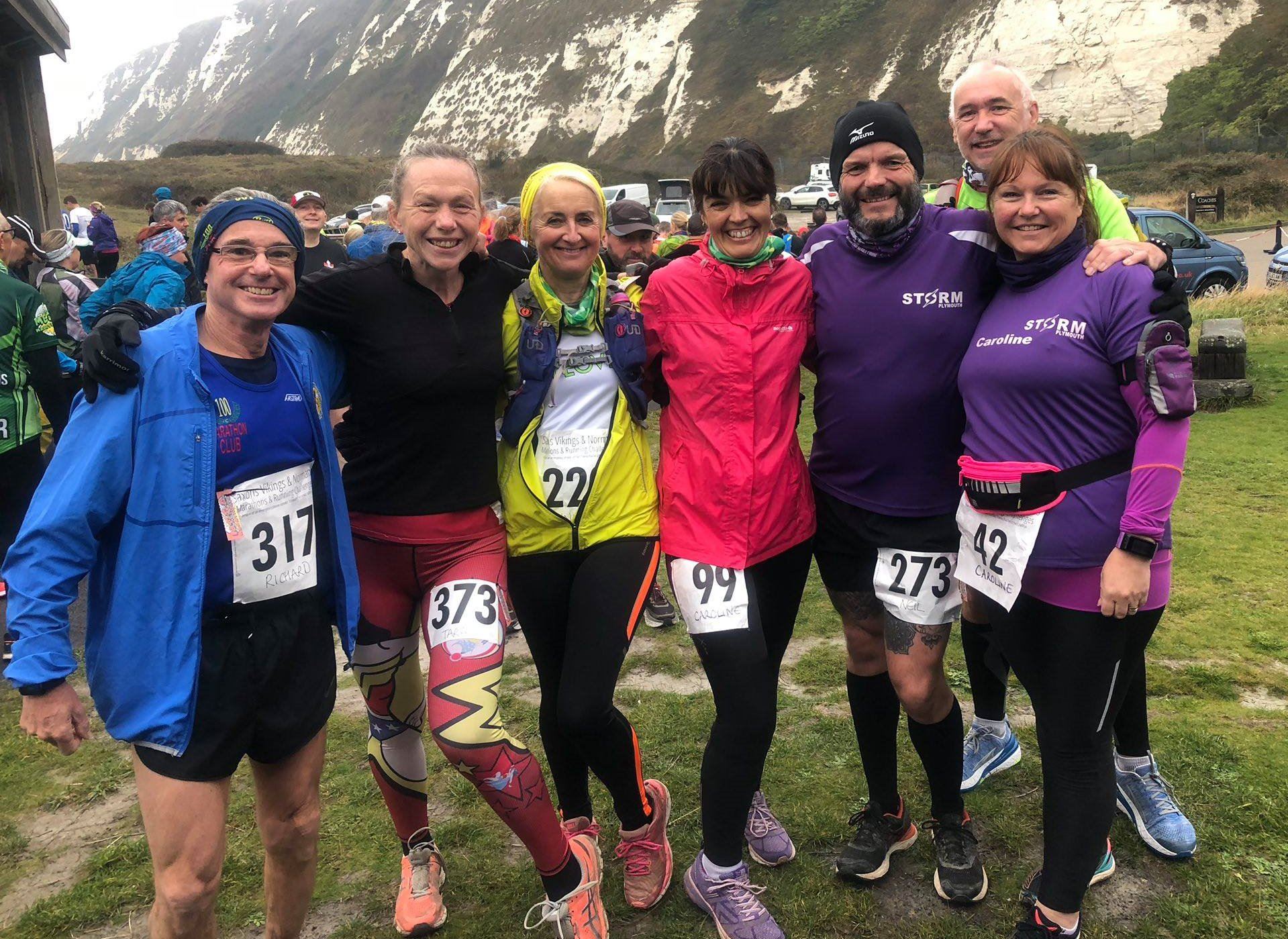 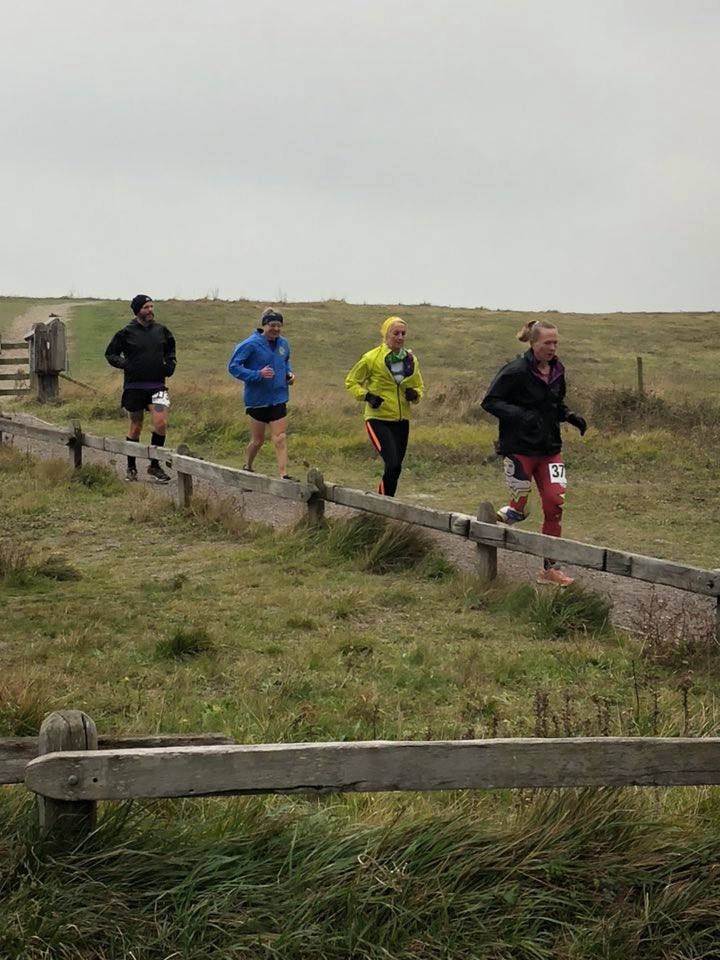 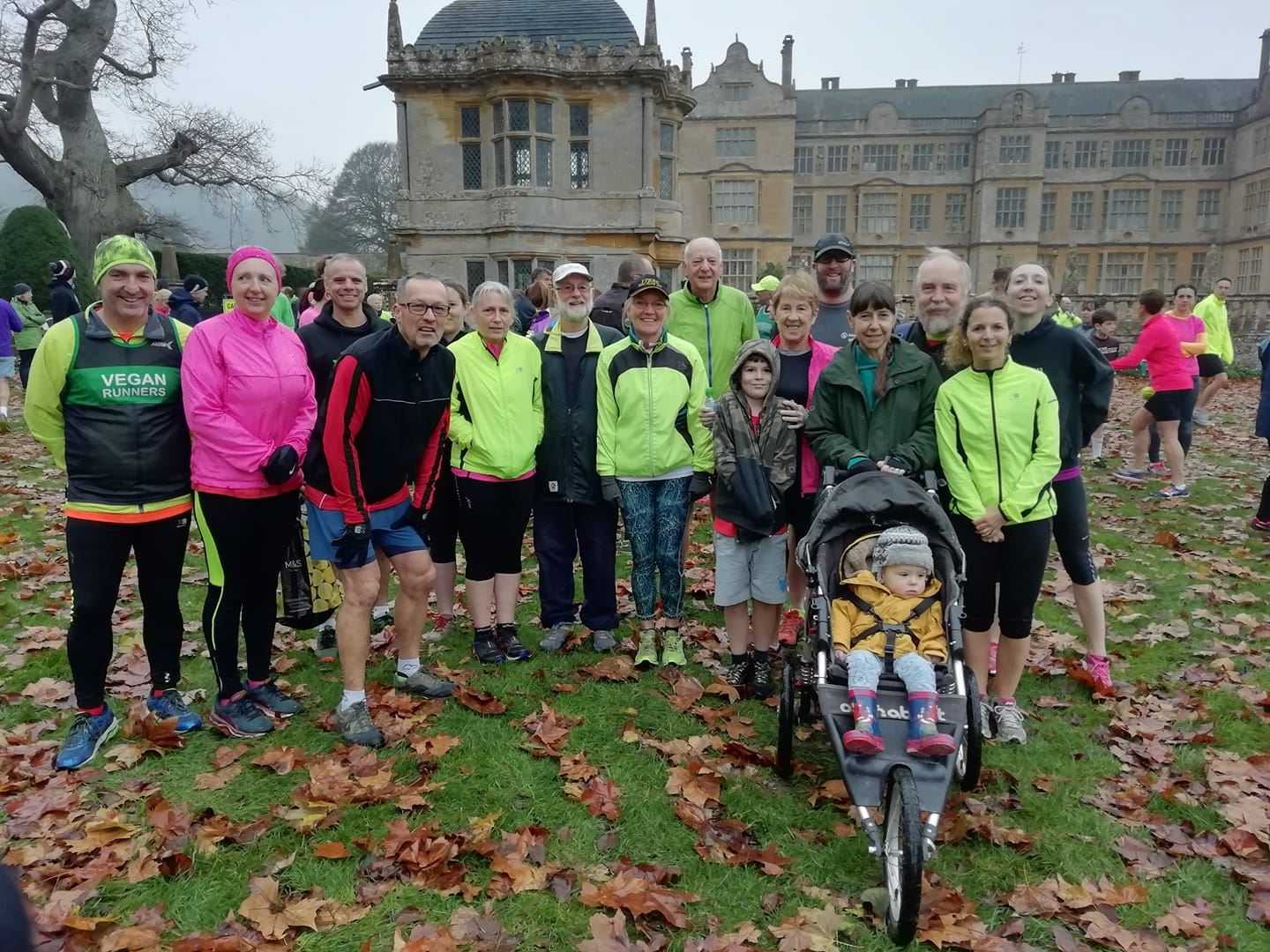 From Dave: Just finished the Southern Spain Trail Challenge. Epic event, 3 trail marathons in 3 days. Fantastic scenery, epic climbs, and interesting wildlife. Even had to shoo some pigs off the trail. Need a good rest now. 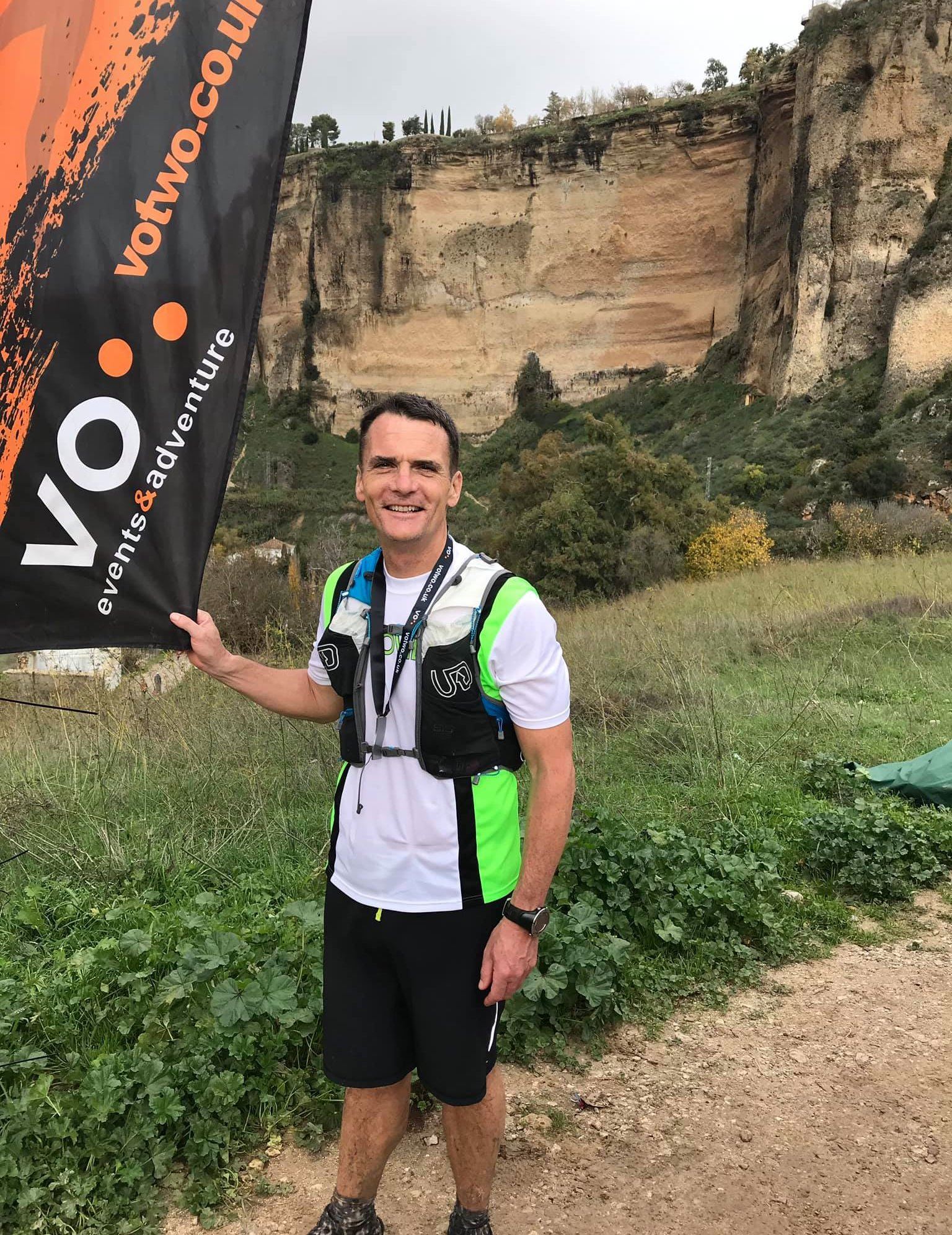 Run From the Romans

First Lady in Run from the Romans last night. 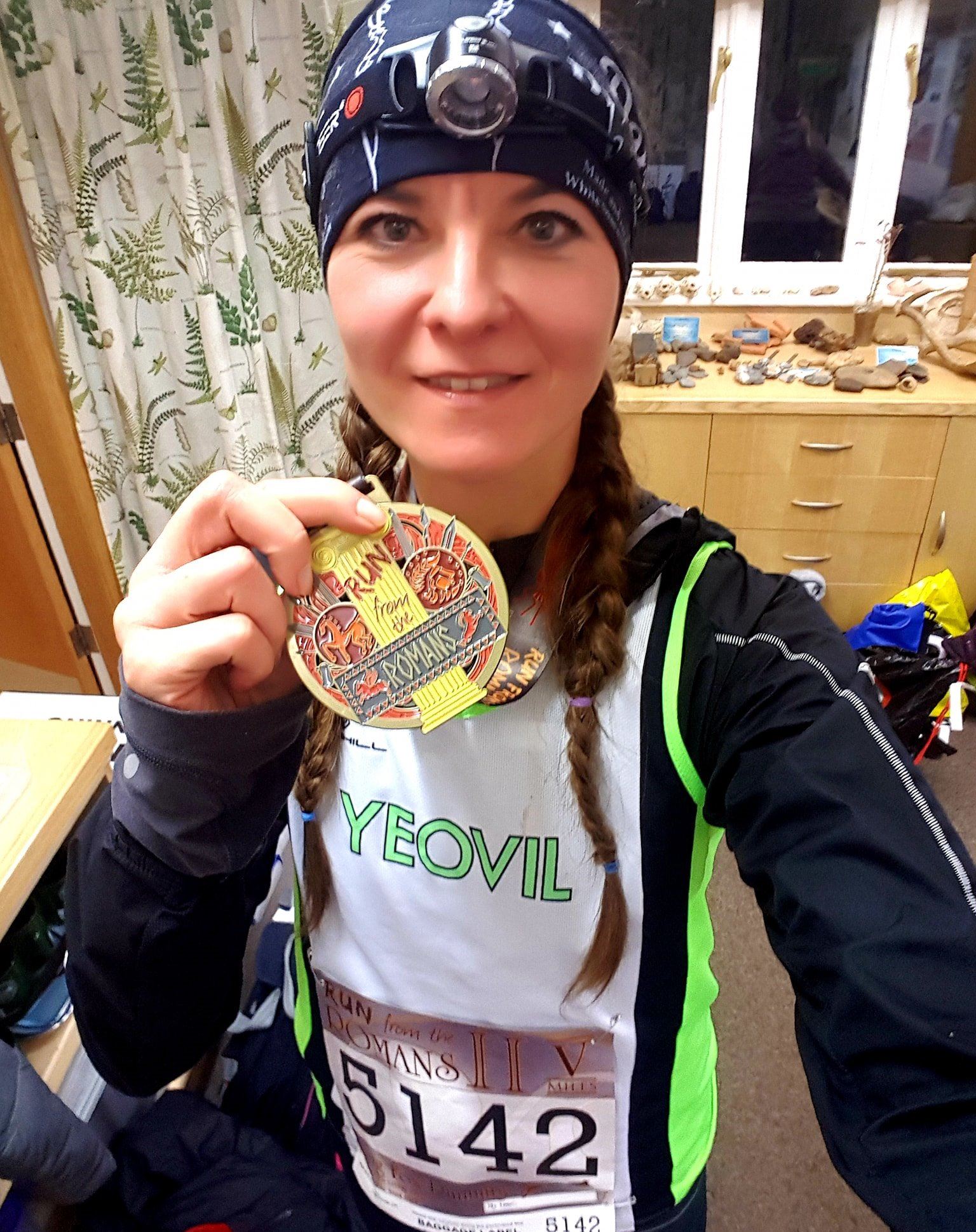 From Louise: Really enjoyed the wet, windy and muddy 10 Mile night race known as Run from The Romans tonight. Not quite sure how I managed to complete it 13 minutes faster than last year but pretty happy with that 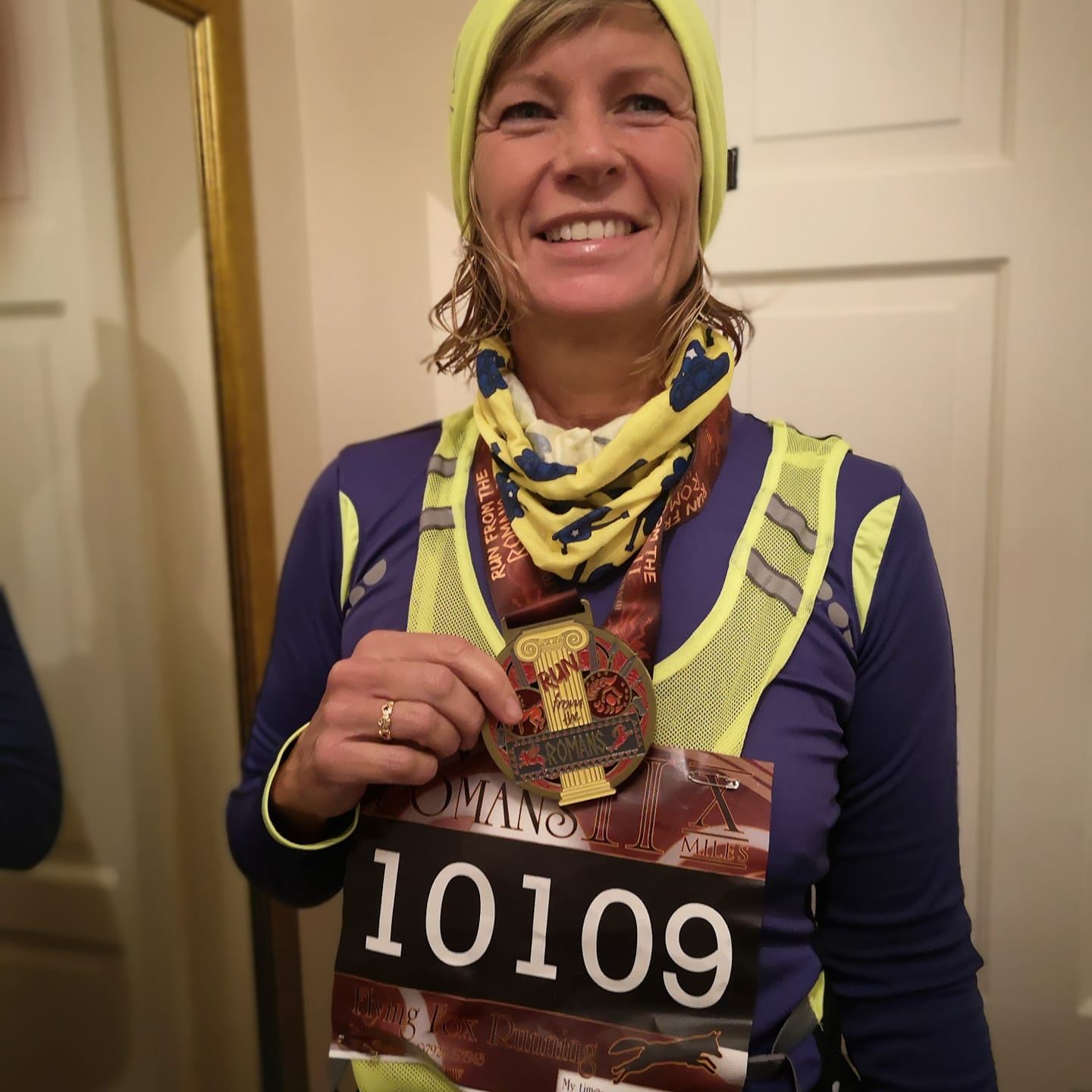 AVR half marathon at Edington this morning. Judith Wilson and myself ran the half marathon this morning - we were 1st and last YTRRC female and male respectively! A nice small marathon (300 ish people) with a course along quiet country lines with a few inclines to keep it interesting. Last race of the year for me and seeing I was fuelled with sherry last night (well it is almost Christmas) I'm happy (ish) with 01:28:03 (would have been good to have good sub 1:28!). 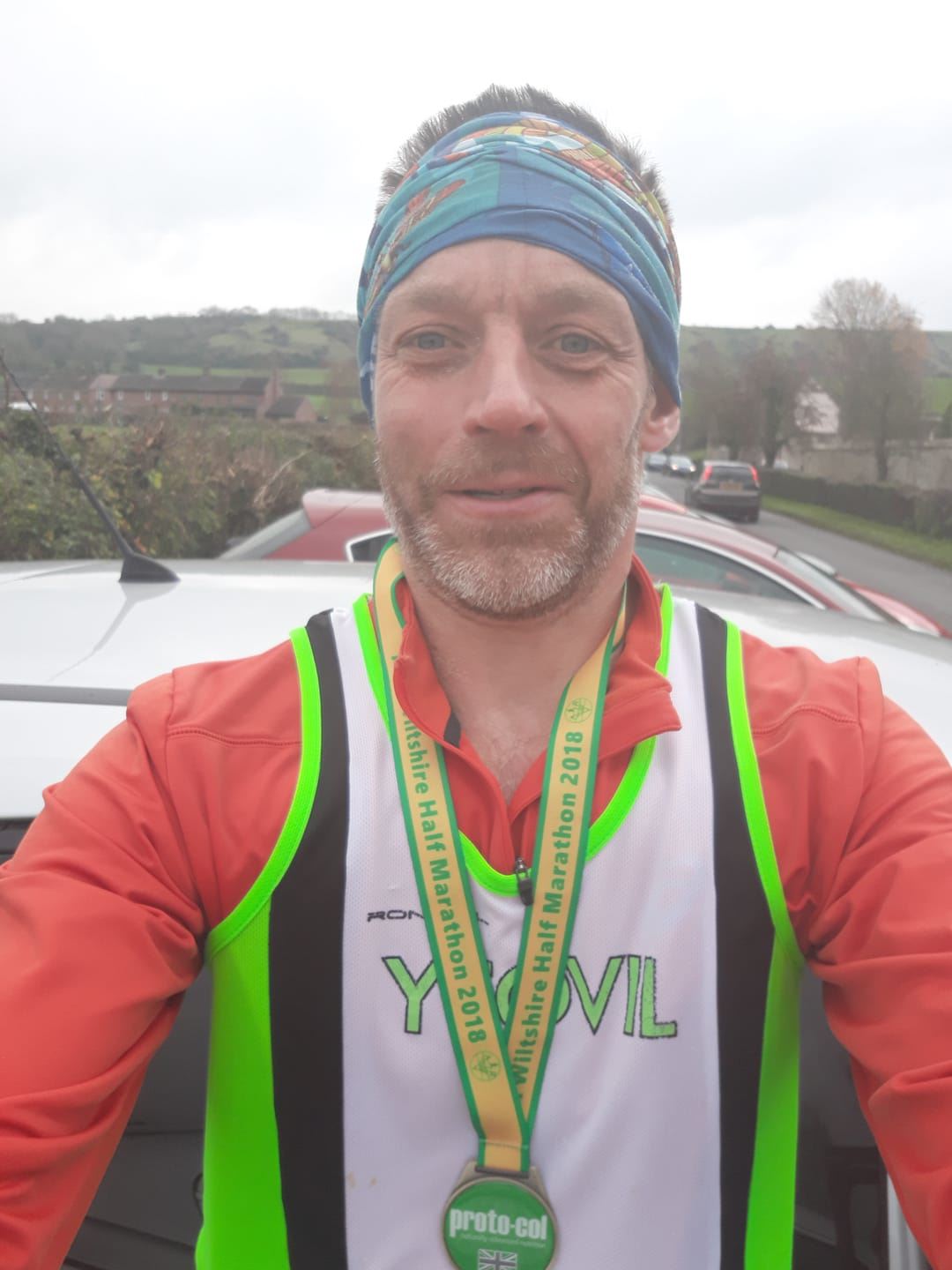 PUB RUN – CURRY RIVEL (22nd November 2018)
It was cold, dark, and bleak, as I left work tonight to drive across to Curry Rivel. A surprise roadworks in the village and diversion (poorly signed) meant I had to use the back lanes remembered from previous Pub Runs to get to the Pub. We gathered in the Bar with open fire alight and became three running groups. I led the bigger group (Rob, Ali, Sue, Anita, JC, and me). Running off the hoof, I simply repeated the route used on the last two occasions. We ran up past the church and joined the main road at the eastern edge of the village. We ran down into Drayton and passed the brightly lit Pub. We continued past Whitecross, and the posh houses, and reached the B3168. Six became four for the longer route. We ran south along the main road and turned right. We continued along the lane and were met by the faster group. Turning right, then left, we climbed the gentle hill going up to the western edge of the village. There was moonlight, and frost was forming in places, making conditions a little slippery at times. It was more than six miles and an enjoyable run. Thanks to Adam for organising. 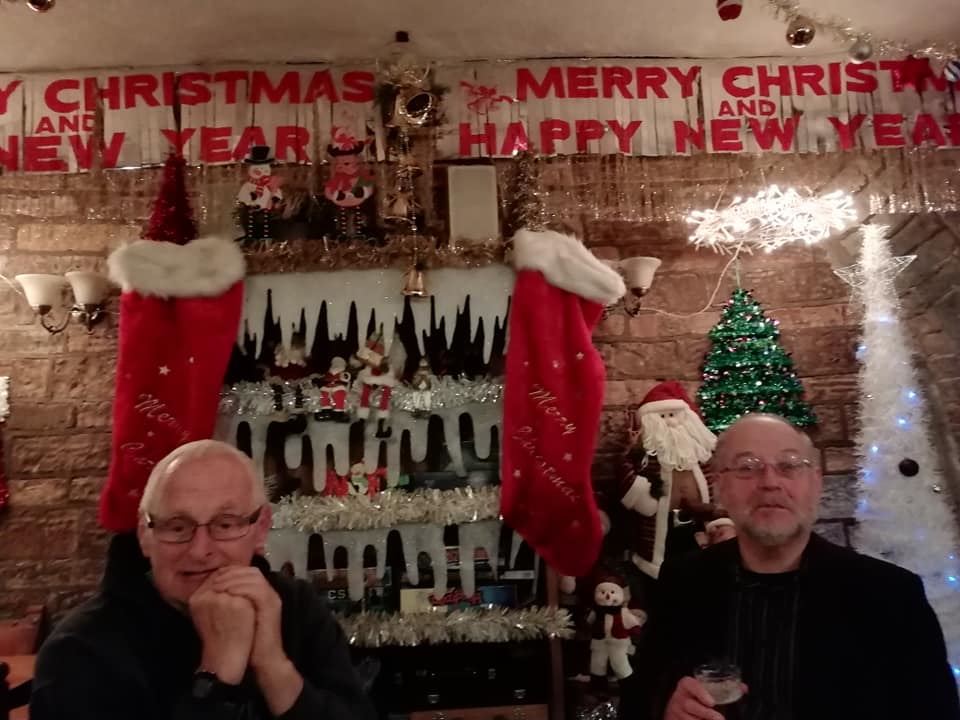 You can see the damage to Phils face due to the Car going into the back of him. 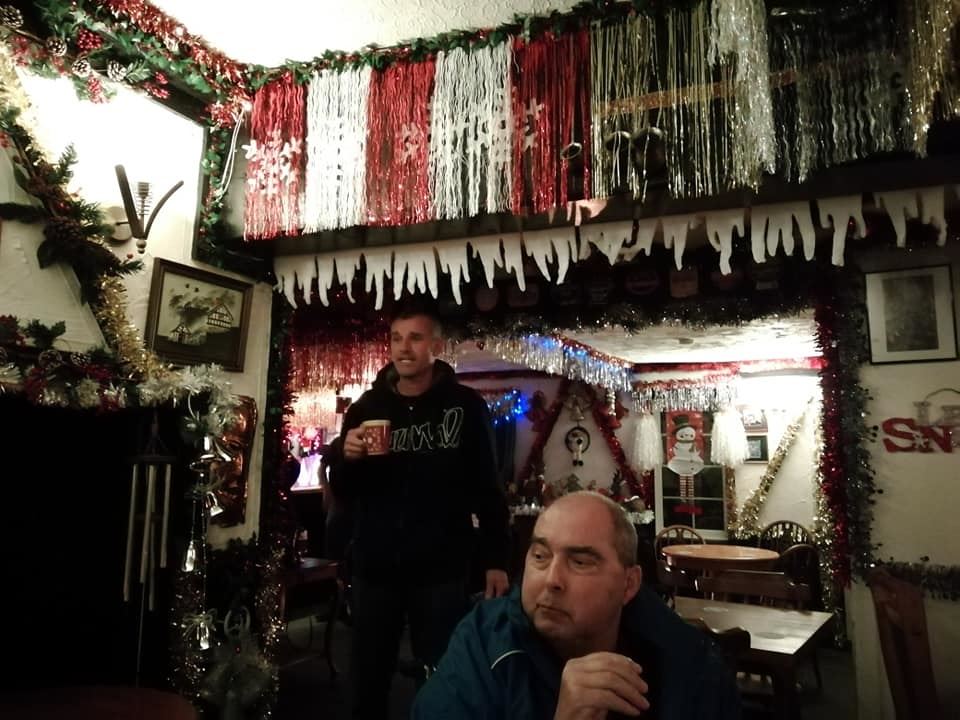 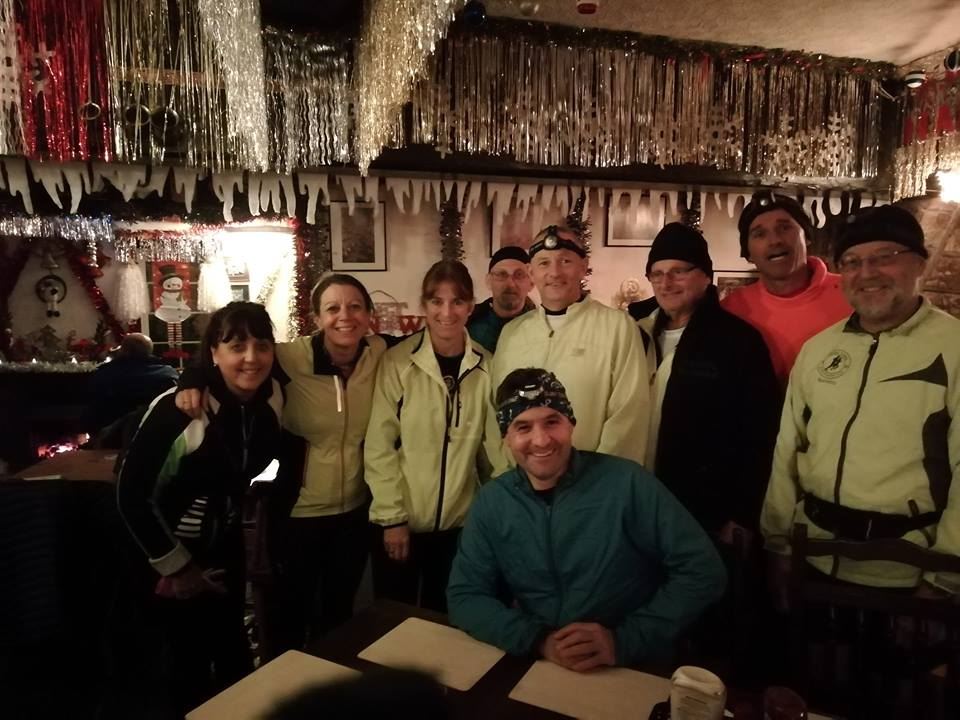