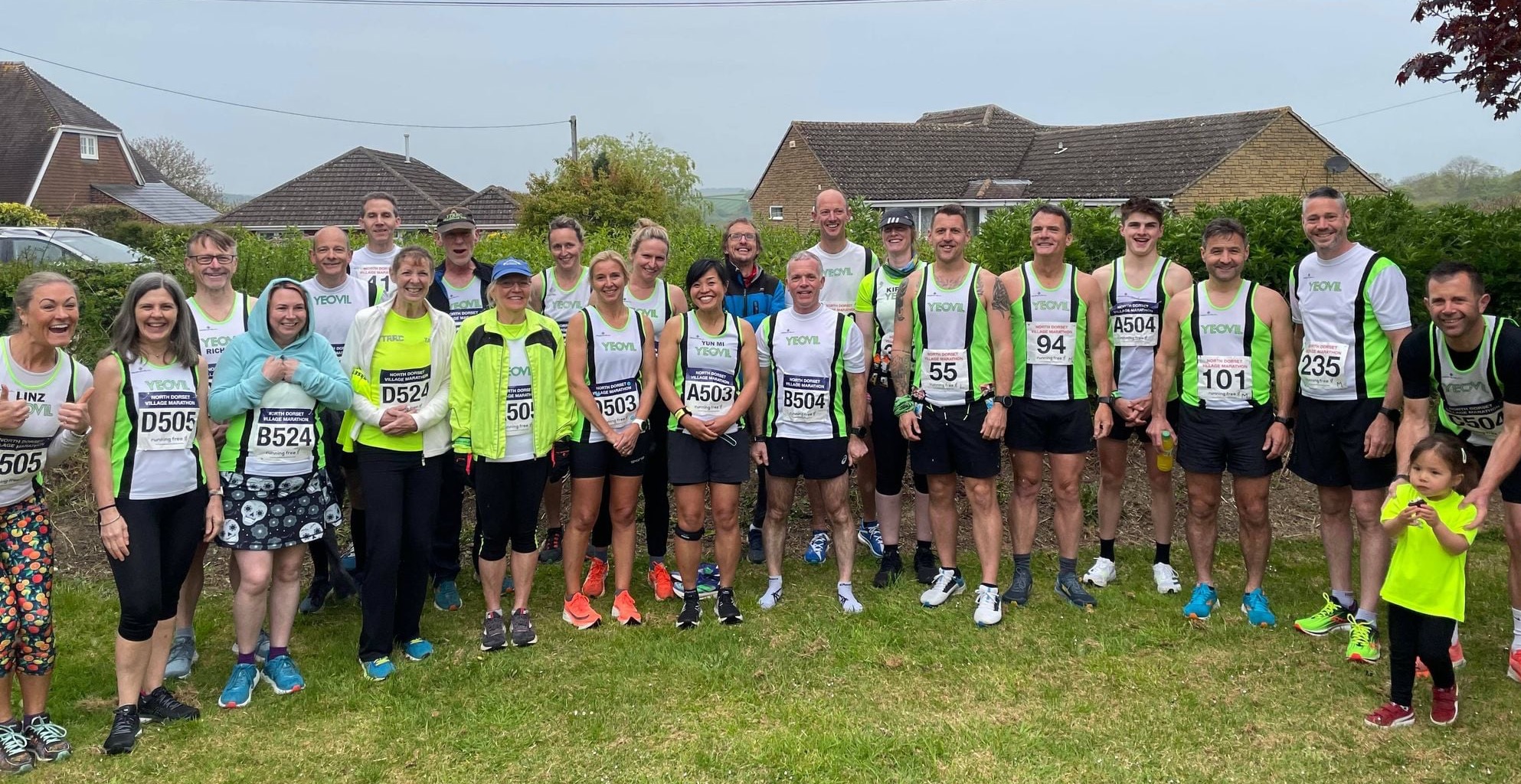 From Matt:  I believe everyone is back from the North Dorset Villages Marathon and Relay. Apologies to anyone I've missed in today's report.

Can't really start without mentioning the amazing Paul Card who did an amazing pb clocking a time of 2:57 - That's seriously fast and on a course that undulates a fair bit too! The weather was pretty perfect for running, with a cooling pitter patter of light rain but no wind to speak of. A bit damp for spectators, but they had the joy of seeing us muppets all speeding past - thanks to the clapping team!

Having relay runners amongst marathon runners makes for some odd pacing as some only need to hang on for seven miles, whereas others need to save a bit for mile 20 when things only get worse. The men's YTRRC speed team got off to a corker of a start with Cameron Groves tearing up the tarmac. Graham Still was still knackered from running round getting teams together but did his bit to hand over to Dave (apologies but we haven't met), who kept the pressure on, and then finally Timothy Hawkins romping home at great pace. They achieved SECOND male team unfortunately pipped to the post by an elite Chard mob (who probably had bikes ).

Meanwhile, Yunmi Jang also shot off on Leg 1 like a frightened rabbit, saying she wanted to aim for 8+ minutes per mile - she talks some rubbish you know! Surprised to see Yunmi so early, Jac Casey grabbed the baton (a flexi-wrist band) and fled into the wilds of leg 2. Now I believe Leg 2 to be the flattest, but I only throw that comment in to provoke! Rachel Mead took over for Leg 3 disappearing into the fine mist as fast as those legs would carry her. The hand over to Vicky Rosewell went smoothly, and although the last bit is over the rough trailway route, Vicky was soon sprinting up to the finish line to take THIRD ladies team (which included bottles of bubblegum flavour cider - yum!

Over on the Mixed A Team, Matt had shot his bolt in the first 500m and was ready to pack it all in before the first mile was done. This lack of warming up is typical of the bloke, he really needs to learn. Egged on by Yunmi, he agreed to 8min miles and they both settled into a 7:20 one! Feeling guilty (really) Matt powered away from Yunmi in the last mile of Leg 1 and was chuffed with his pace and time. Over to Angela Claire who was hoping for 11 min miles. There was lots of relaxing chat at changeover two, when suddenly Angela appears having smashed her target and didn't stop grinning for the next 1/2hr even when messing up her Strava entry! Richard Clayton was up and running with a very determined look as he wanted to see if his car was OK because Matt was driving it and having his first electric car experience. Everything went fine, except we nearly missed a turning and then had to park miles away so he didn't have to reverse. Oh yes, back to the race. Rich was finding maths difficult but managed to work out his leg was a bit longer than first expected, but again, pacing was spot on as he swung up to the last change over. Taryn Monks had been waiting a while what with fourteen false alarms (jacket off-jacket on), so she wasmega-hyped dashing off round the corner only to be confronted with a bit of a hill! Undaunted, she too put on a fantastic display and paced things nicely to round off a good set of times by all.

On to YTRRC Mixed B Team, where June Moule also had the "school hill" start leading them off on leg 1. Longstanding club member June is too experienced to hang about and just gets the job done. Therefore it wasn't long before Lindsay Saunders was up running next for their team, having already made me jump when she shouted encouragement as they went by in the car! It wasn't so much of a surprise to see Lindsay coming round the corner as we'd heard her about five minutes before that, but she was looking smooth as she approached the hand-over. Tim Willis had to douse his pre-run ciggy and get a shift on, but soon he too was legging it along a random Dorset lane looking for luminous dayglo yellow arrows and the accompanying marshall. Their last leg was run by Amanda Travers setting off somewhat damp from the rain, but definitely not with dampened spirits. That last leg is the glory leg though with lots of people cheering and clapping so I hope she milked the applause surging to the finish to complete our tally of relay runners.

But of course there were lots of other YTRRC and YTRRC connected entrants out there doing the long slog of the full marathon, and I hope I'm listing these in something like the correct finishing order... Obviously, Paul Card was first YTRRC. He really tried to look modest at the finish, but was clearly well chuffed, and so he should be. Next was Kev Brettle and then Daniel Stephen James McFarlane got the better, but only just, of Dave Tilsley. Andy Farrant had a terrific run having had this event delayed due to covid cancellations.

Kirsty Norman also did the relay, but on her own - unfortunately her team-mates couldn't make it, so Kirsty stepped up and converted her entry into a marathon and used it for a training session - mad fool she must be! I understand Lynne Thumpston and Anita Farquhar Rufus also completed but I'm sorry to say I missed seeing them out there. I'm sure you can find their reports on the YTRRC feed. These two smash out marathons all the time, so while its amazing for us mere mortals, they probably treat it as a nice way to spend a morning.

Lastly, just a few names to mention as worthy YTRRC exiles - Caroline Watts and her family also completed the relay, Luke Hicks got a sub 4hr which is a course pb for him, Emma Jane also completed the marathon, and Georgina Brice completed her 100th marathon which is just nuts! Thanks to Graham Still for organising the teams - top job done there! And it was nice to see the Club Chairman out on his sticks, even if he did try to trip me up! 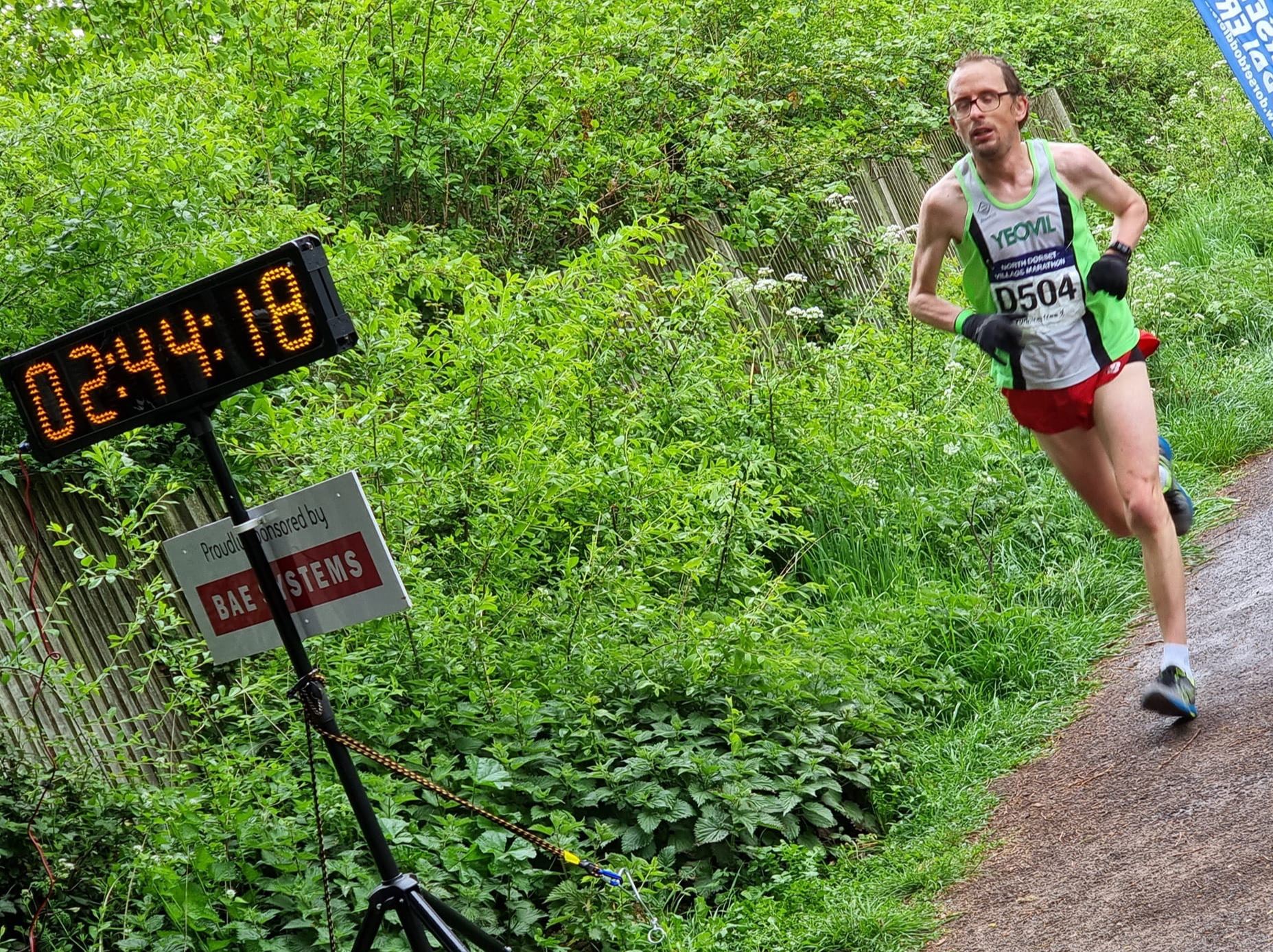 From Yunmi:  ( YTRRC Ladies Team- Yun Mi, Rachel, Jax, Vic) We have been training for months and months for the team relay as you all did. We build up a super team spirit . Everything went well as planned: completed each given mission, nailed our target pace and our tactical strategy worked well.

Wishful thinking!! It was just jolly running around the picturesque Dorset country lanes in cool, drizzly condition. Captain Vic had a plan:

The race plan was leg 1 and leg 2 do what we can as Yun Mi & Rachel had just came back from injuries( Resting before a race is always good !). Leg 3 and leg 4 are working their socks working towards a strong finish. We didn't want to let each others down, so we all gave it a good go. Yun Mi made a good start. Rach climbed up the hill to keep up a good strong pace. By time Jac gave the baton to Vic we knew we are in 3rd position. Adrenaline pumping - Game on. Our 4th and most important leg, captain Vic ran 7:15 pace/mile to bring home the bacon - well veggie burger, as Vic is a veggie, for our glorious 3:18:40 finish. Boom! Unexpected prize was a bonus. The best thing was we had fun and we all had a great day!! Fantastic effort all around.

Well done to our other club mates marathon effort! Congratulations to Man's team( Cameron, Graham, Dave and Tim) for their 2nd place and all other rely teams. Thank you for everyone's support. Come On YTRRC!! Matt Driver Come on where is your report? We are all waiting. Just in case you're delayed I put you and Richard's photo. Look closely. 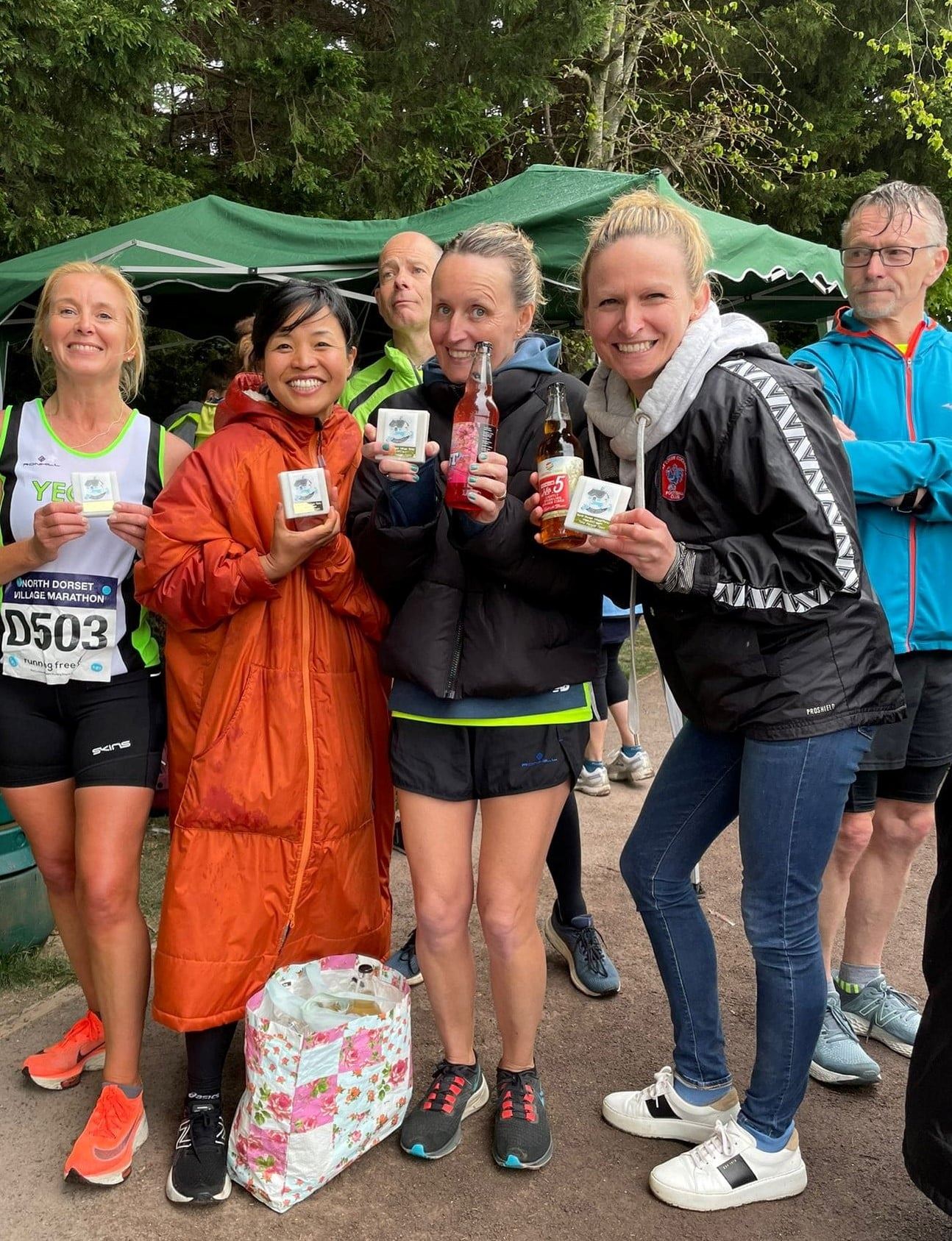 From Steve W: Just to say a massive thank you to team captain Graham Still for organising the North Dorset marathon entries today for the relay, well done all teams and individuals and as always great to see everyone and belong to such a friendly club (someone enjoyed it even with a bit of rain)

From Rachael: A massive congratulations  to Mel Dodge on her parkruns! A lovely morning at Poundbury 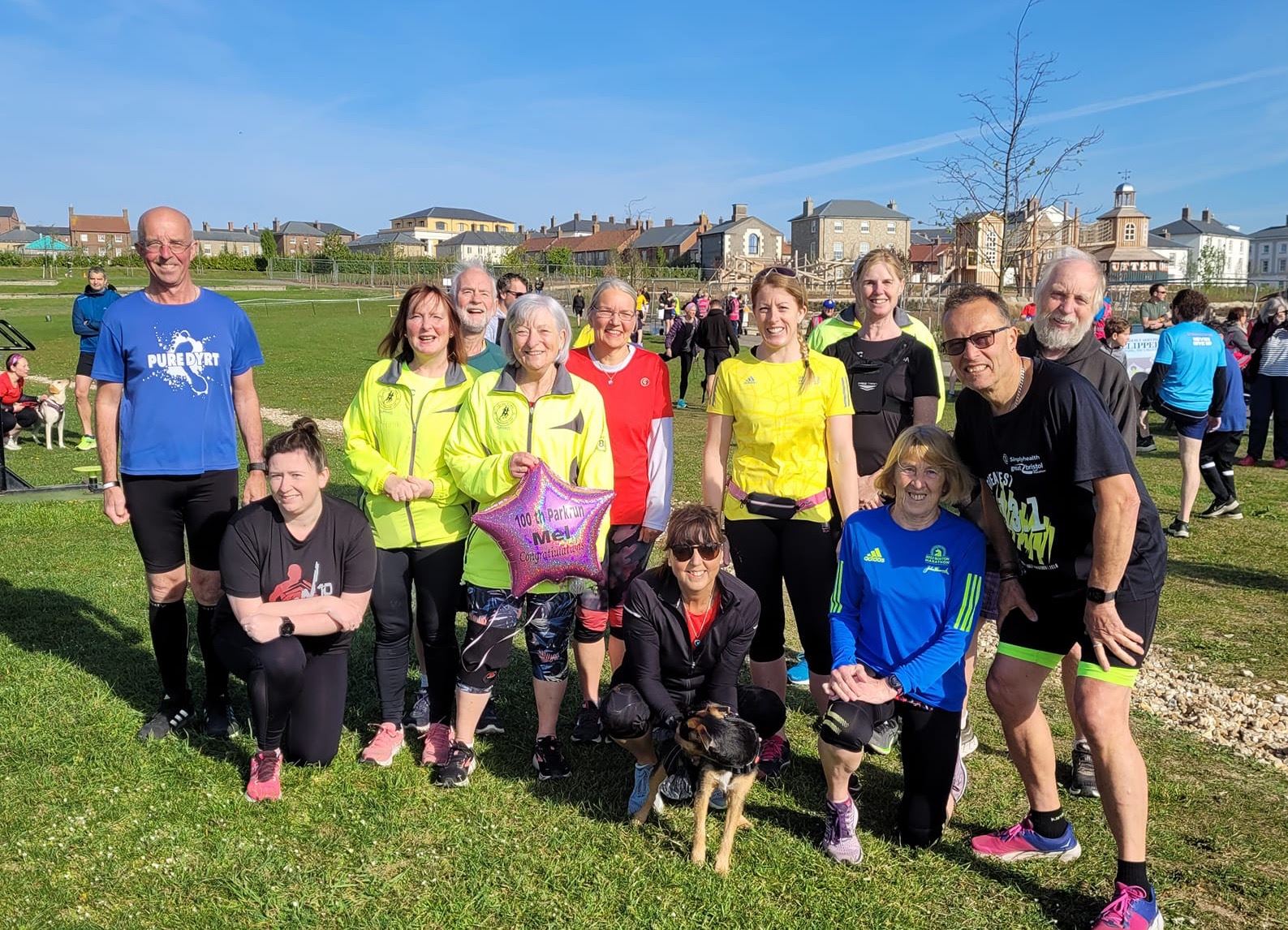 From Kev:  I made the Brokenhurst parkrun report by default. For the first time in our almost 9 years one of today's runners completed the course in his working clothes! M50 Kevin Doherty of Vegan Runners lives in Yeovil but is a car transporter driver working into Southampton docks. His travels for work have allowed him to run at 74 different venues in 116 runs but on this trip he forgot his running gear! Undeterred Kevin ran in his work gear (albeit without the high vis overcoat!) and unsurprisingly didn't challenge his sub 20 minute PB! Hopefully Kevin will return next time with his shorts and beat his Brock 33:21. Here's me and Kevin in our clashing high vis. 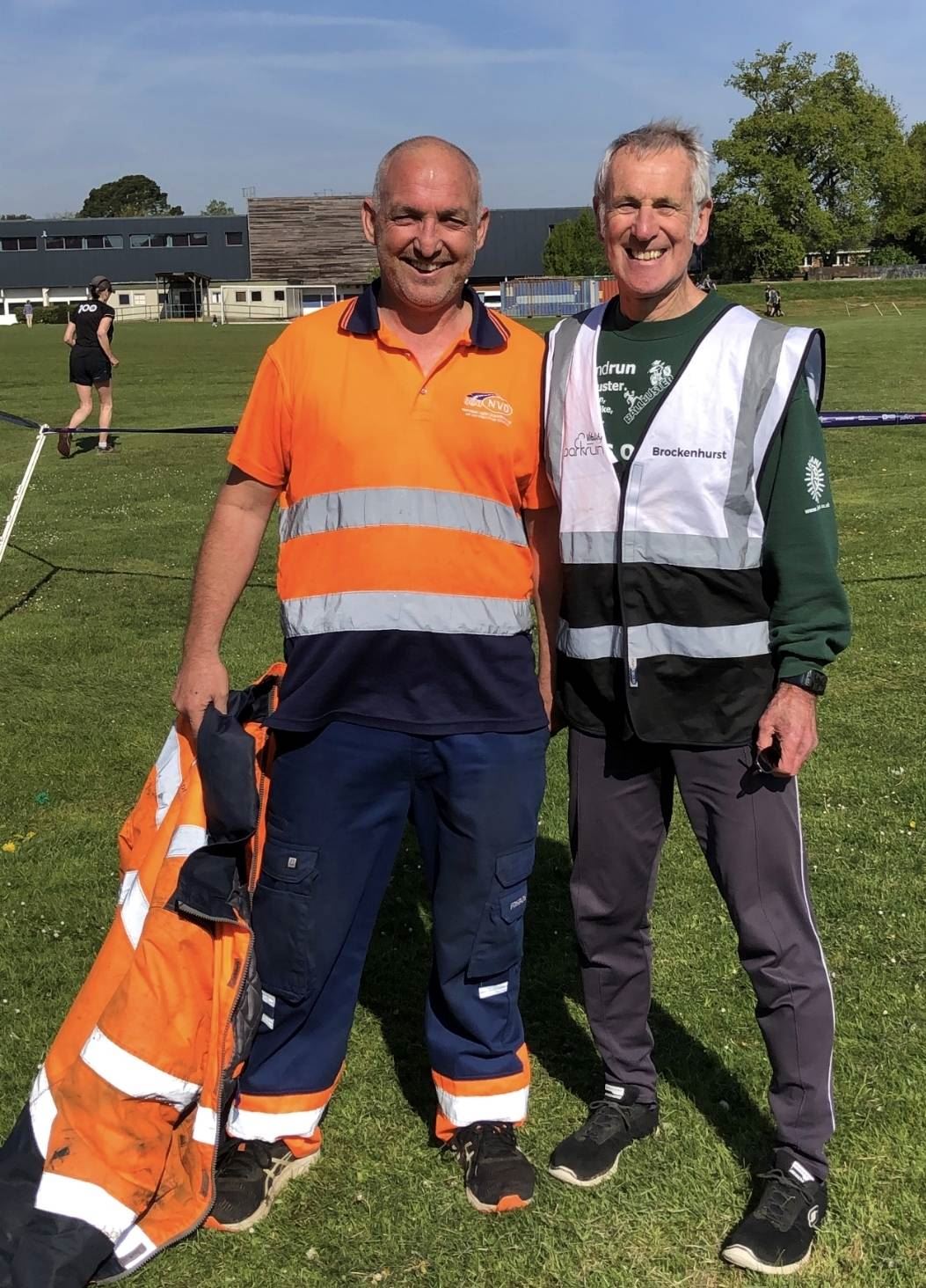 From Mark: We were back for a Run and Pie evening, but we only had four in the not so fast group (JC, Sue, Lindsay, and myself). Being light and sunny but cool, we did the off-road route (an anti-clockwise loop) which initially involved crossing fields until reaching a track called Langmoor lane. This track took us into South Perrott where photos were taken next to the stream. We continues up the lane to Pipplepen farm where we turned left. From the track we entered fields which we crossed. Two corrections were necessary before reaching the A3066 just outside Misterton. We followed a path round the back of the village which passed tennis courts, goats, sheep, allotments, and some stone steps down to the road. Turning right we ran up to the corner, then picked up the Liberty trail. We climbed to an exposed hill top and followed the path to Duck’s Field crossing. We then climbed a track to the top of Knowle hill. The last leg was along Mosterton Down Lane back to the pub. I have yet to run the route with at least making one navigational error, but it is good for mostly being off-road, and giving some great scenery. Thanks all, and thanks Phil for organising. The Pie with help yourself vegetables was good as usual. 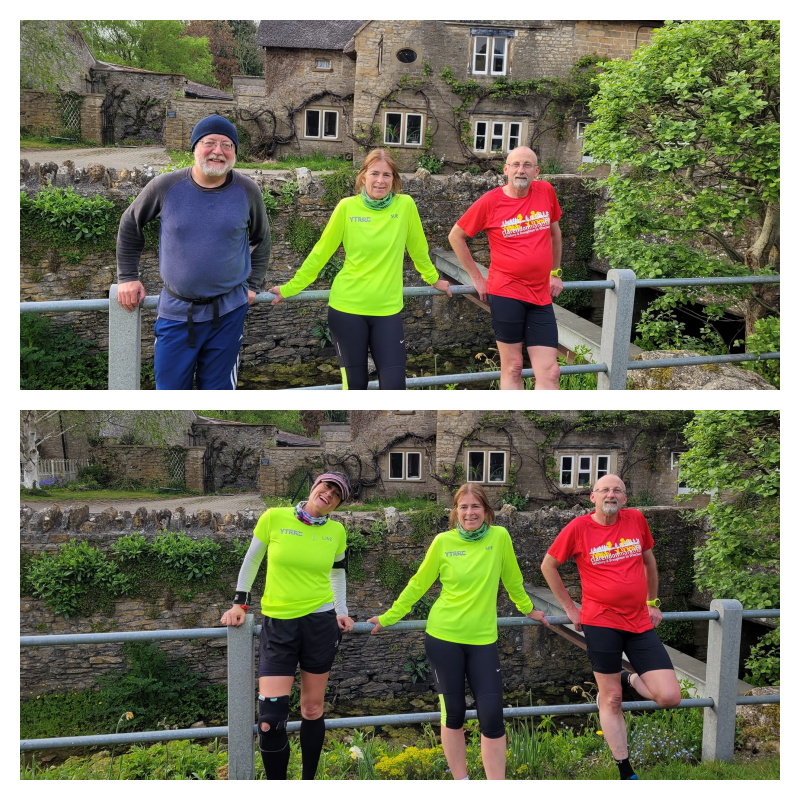