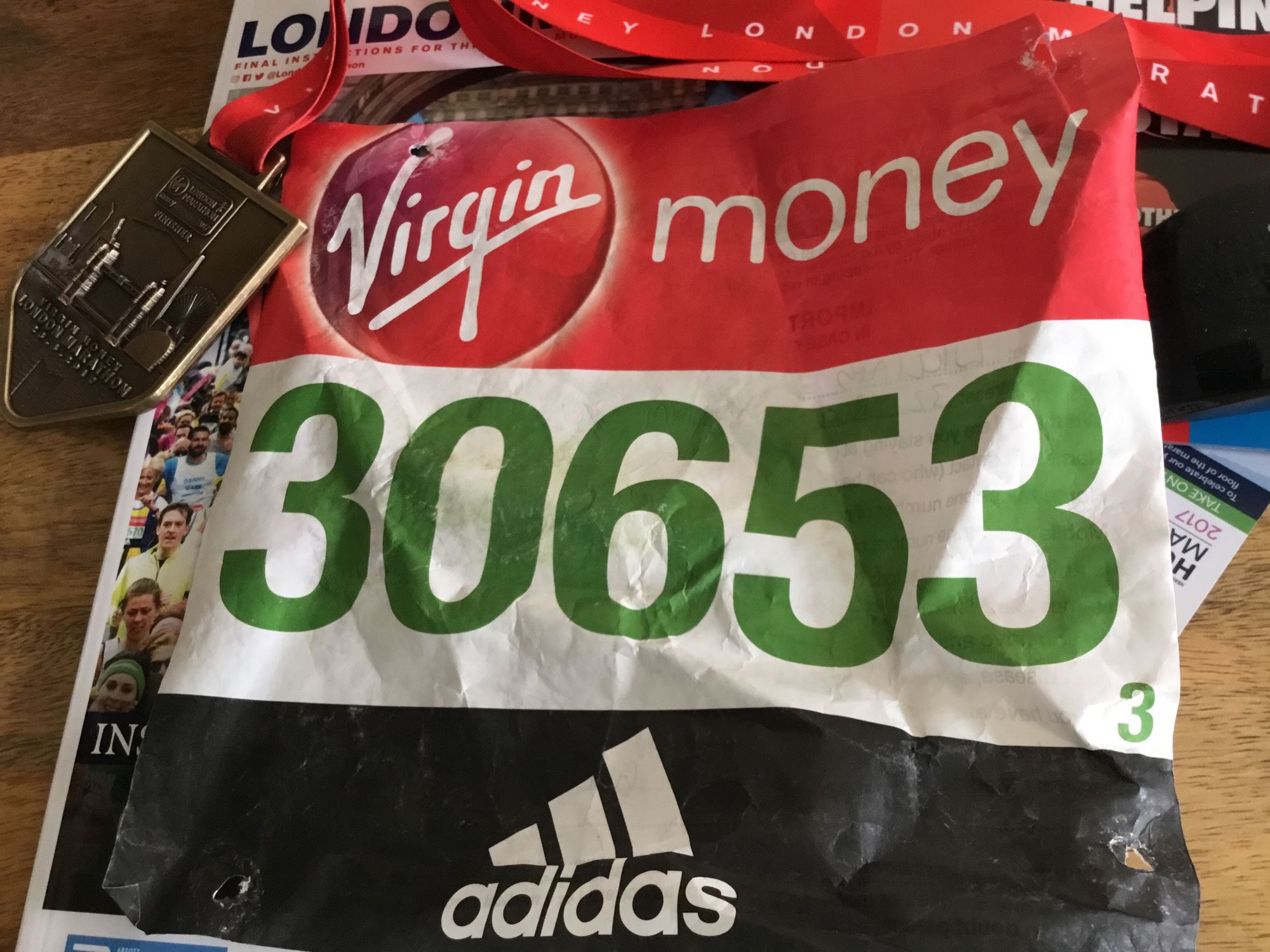 On Sunday was the long waited for London Marathon, with a few getting through on the luck of the draw, others Good For Age or Championship Places. We had ten runners taking part:

With a fair few personal bests, it was a great day and the crowds were amazing as always. Well done all. Thanks to all our support as well with Lesley booking the Saturday night meal and Steve, Linda and Kimberley's family around the course, we also had a few that travelled up from Yeovil to support. 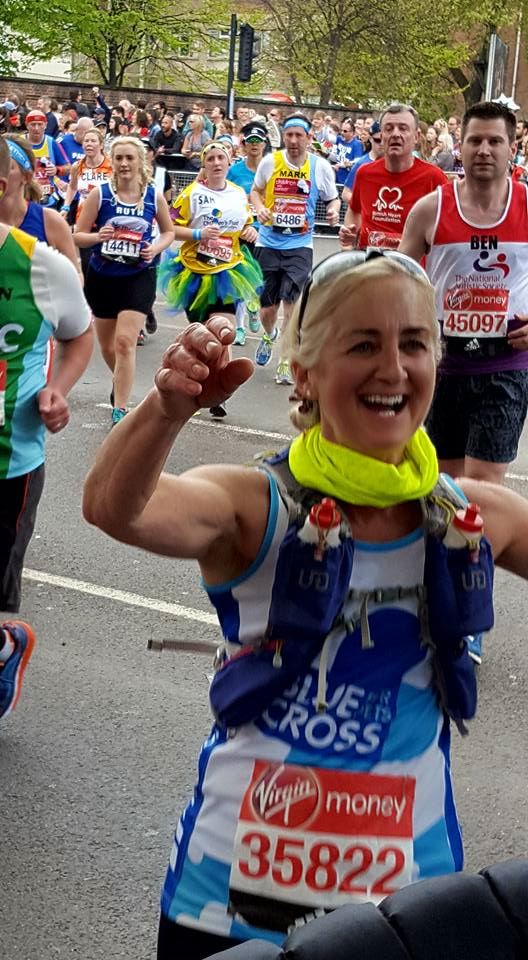 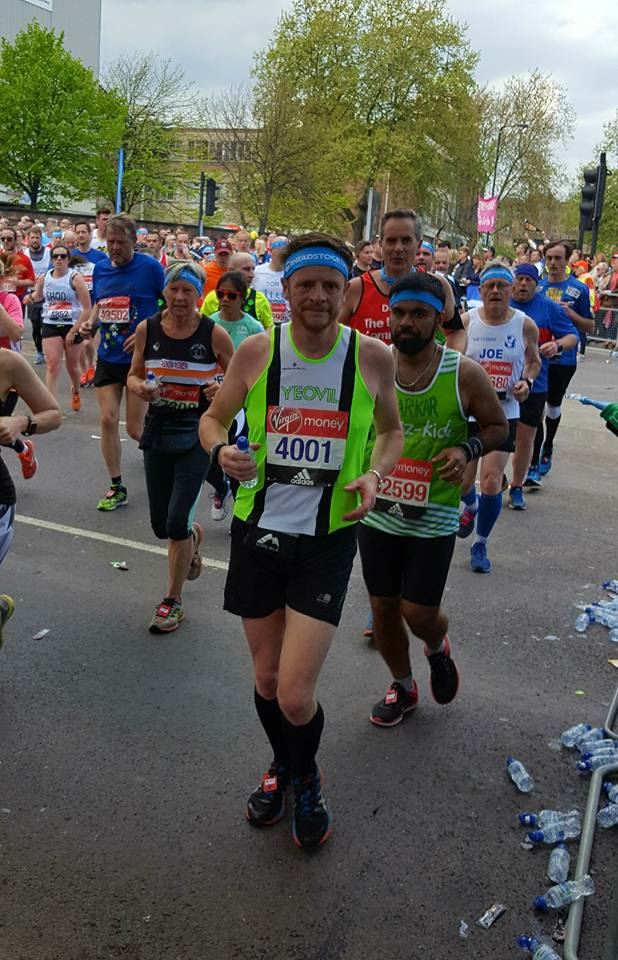 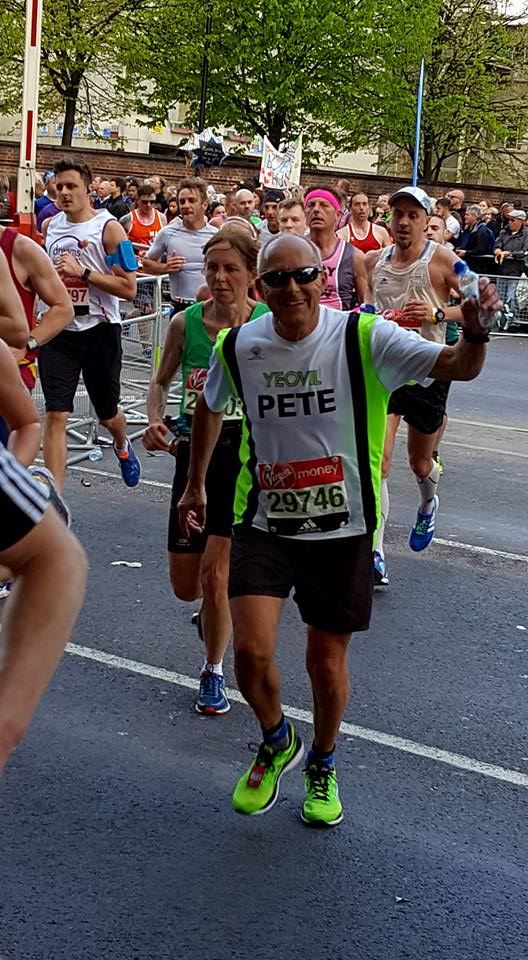 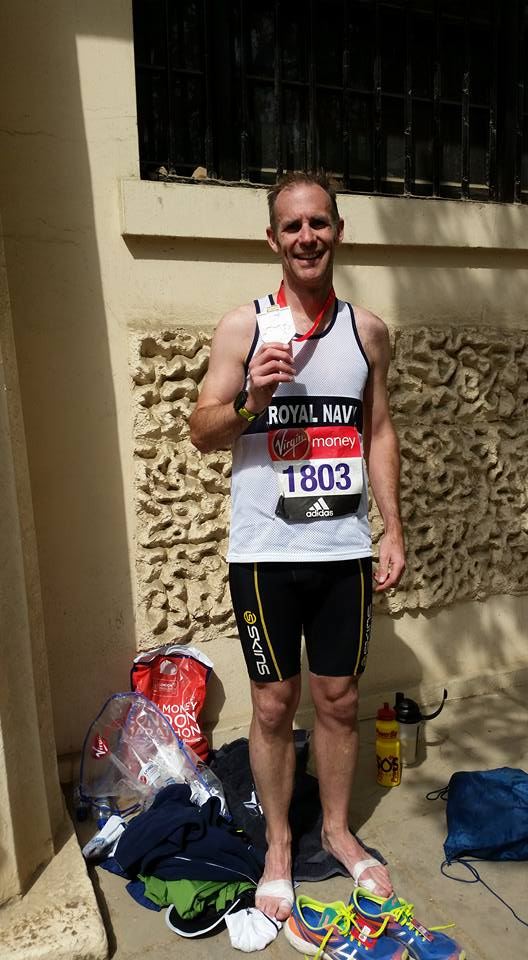 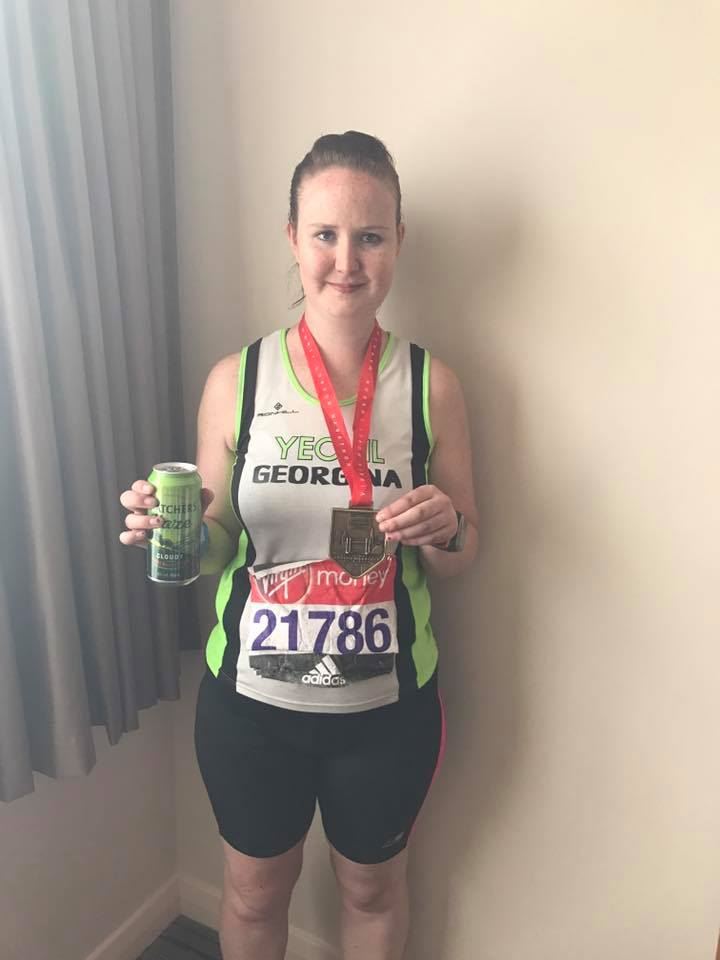 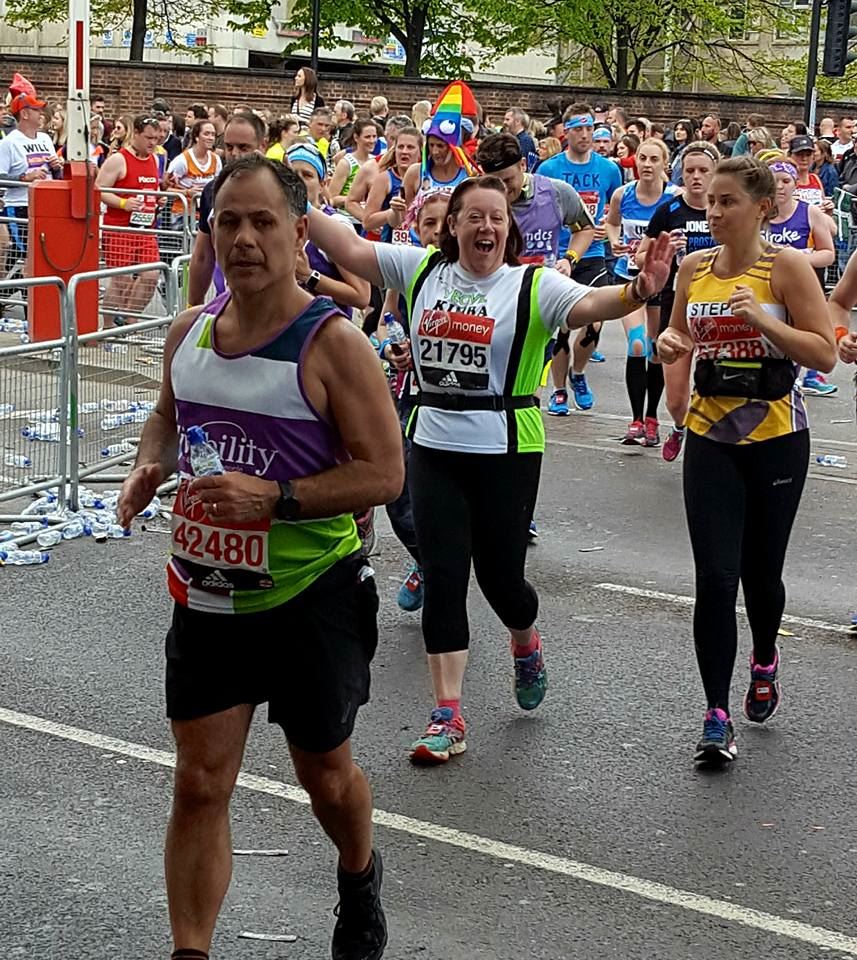 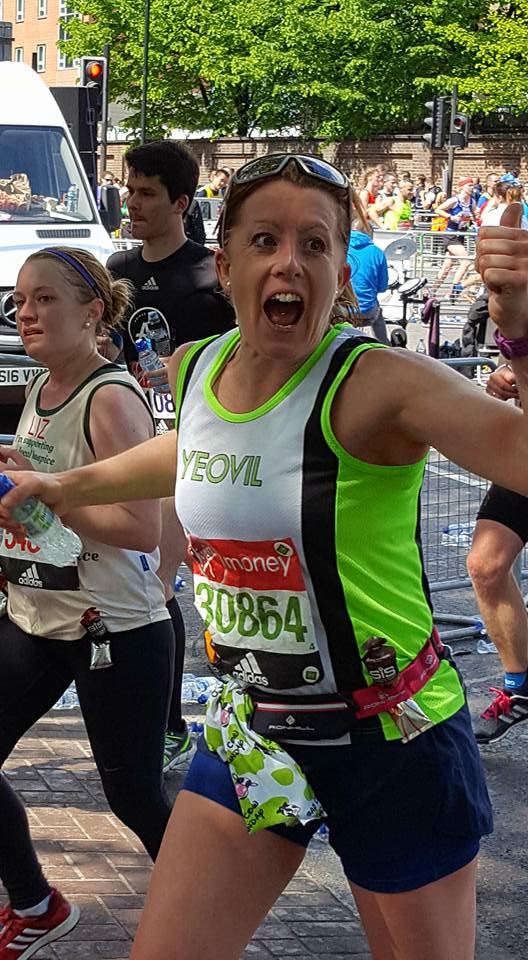 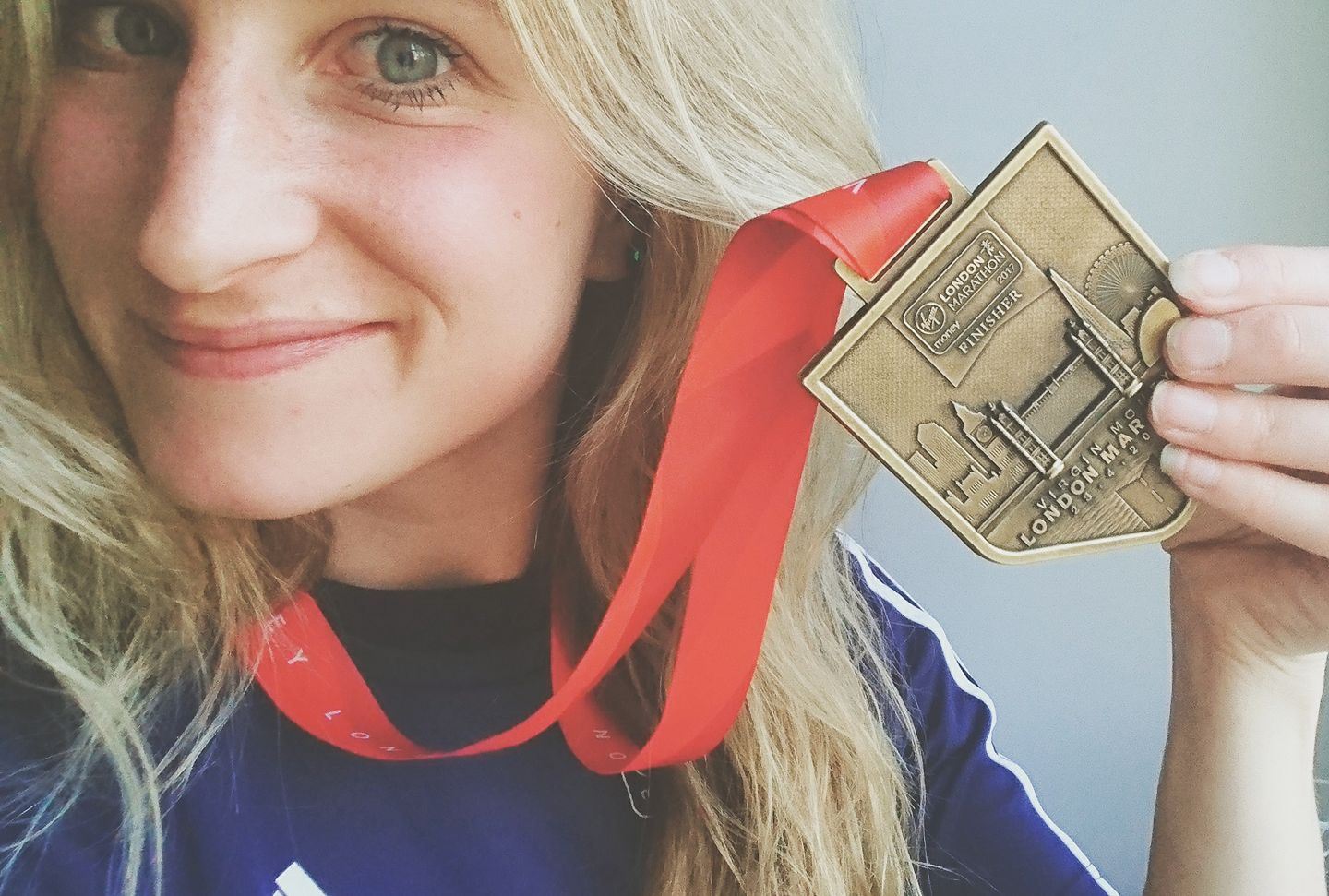 This in from Pete:

So, after travelling up on the Berry's Coach on Saturday morning (missed out on the cheap first class train fare of £20.00).  A couple of rides on the underground got us to Queensway Station and a short walk along Bayswater Road saw us arrive at the Double Trees Hilton opposite Hyde Park.  Although the room wasn't ready the staff said we could have another room on the same floor, so minutes later we were in the room and by some slight of hand the toiletries in the bathroom had disappeared, thankfully I bought my own.

After unpacking we ambled up the road and found a cafe, two hot soups and tea and coffee respectively we were re-charged.

A bit of channel flicking until we got ready to meet up with the other runners and family members in London's theatreland for a meal in Prezzo's.  We had a quick stop in a couple of watering holes before meeting up with them.

One bottle of red for the lad and water for me and the customary carb loading meal before we ambled back to watch MOTD.

The Hotel had arranged breakfast to start at 0630 so had plenty of time.

The journey to the start was uneventful and the walk to green start gave us the opportunity to stretch the legs.

We did meet up with Helen and Lauren and Guy met with his 100 Marathon Club mates.

A bit slow on the start as over two minutes to cross the line, why are they walking at 3 miles if good for age?

Guy went off like a scolded cat and I decided to warm up over the first mile before looking to settle at 07:40 pace.

I did feel the right hamstring kick off at 11 miles so had to nurse that along, I think it was about 23 or 24 that I felt a twinge and wondered whether it was going to go but thankfully it held out.  I had to work the last mile to ensure I maintained the same pace, thankfully nobody had to help me across the line.

After that it was the customary photo, the walk to the baggage truck and seconds later you were presented with your bag, brilliantly organised as always.

The first person I came across was Bryn, closely followed by Lauren.  Guy it seems had moved slightly away from our meeting point and was found close by some monument of a bloke holding a rifle.

The two of us then hotfooted our way back to the hotel, got showered and changed before coming back out to join all those that were still finishing.  We did try one of the pubs for the pint of free beer but soon decided food was the order of the day and made our way back to the previous nights venue, as it turned out it was only doing pre-booked seats. We soon found another venue but as a bottle of red was expensive and the menu somewhat limited we used Guy's app which allowed you to buy two and get the cheapest meal free.  Plus the red was cheaper.

We then decided to head back to the Hotel where we ordered a bottle and two glasses and talked about our respective runs.

Just before MOTD2 we went and acquired an ice cream from KFC to savour whilst watching the football.

Monday morning saw us having a leisurely breakfast before making our way back to Waterloo to catch the train back to Yeovil.We have booked the Hotel for next year so all sorted.  No doubt Guy will add his bits to this Blog, once he wakes up?

This in from Kimberley: 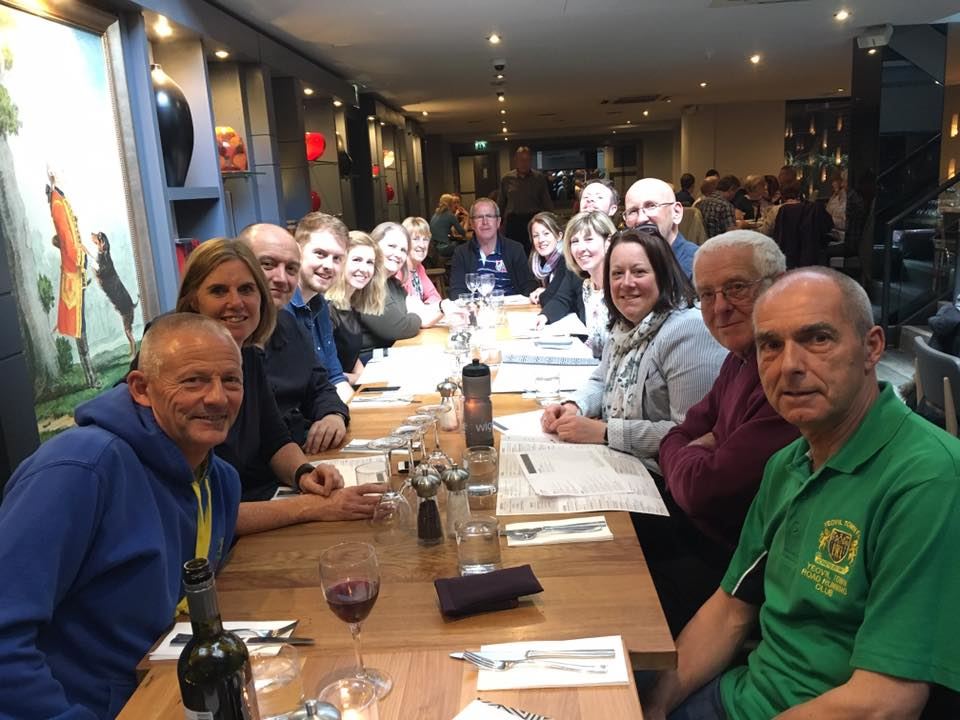 Southampton had their first Full and Half Marathon on Sunday and we had a few Green and Whites there. Nikki had a great run and was first Vet 50 with a time of 1:43:10 and Simon 1:46:18 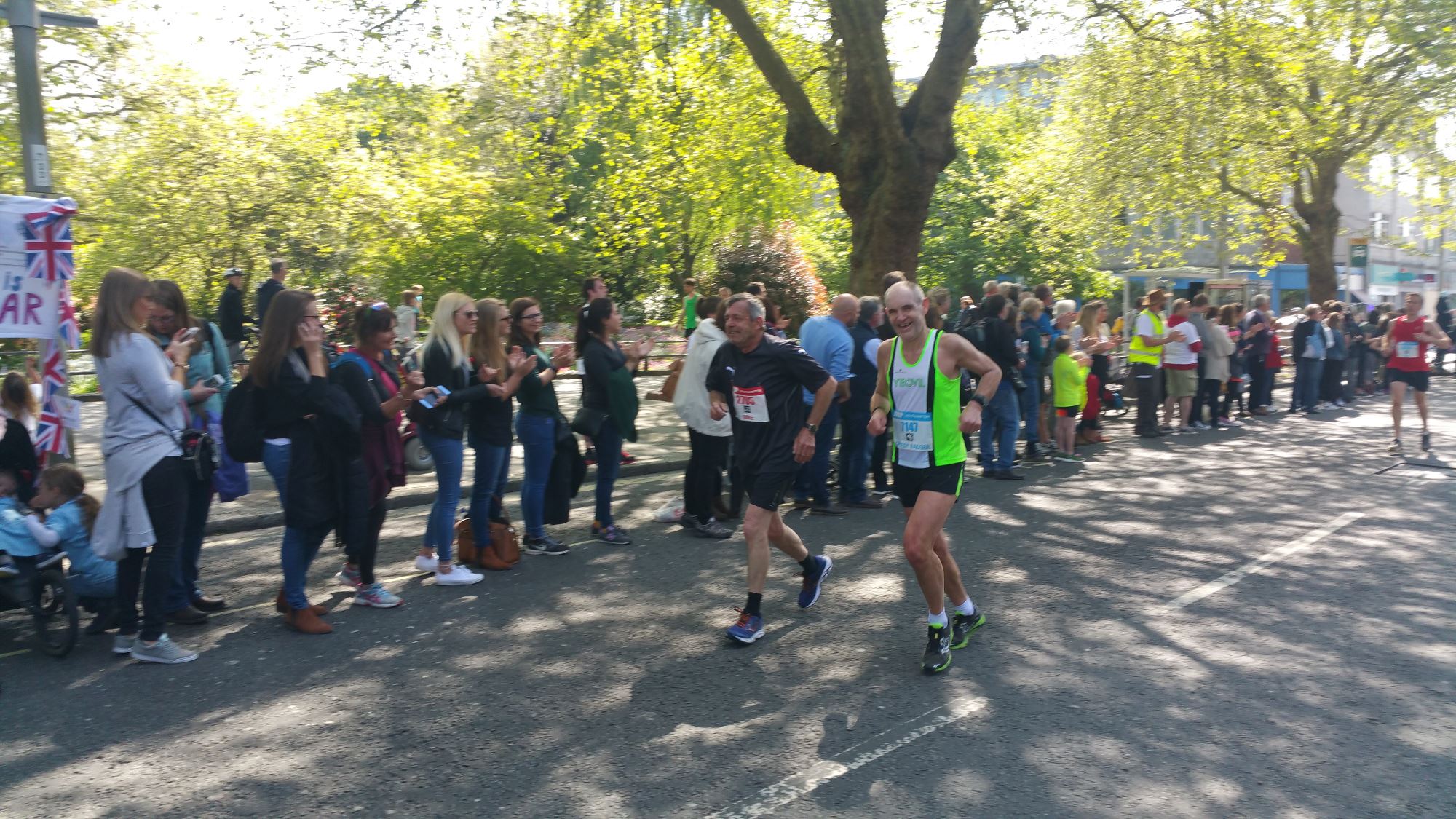 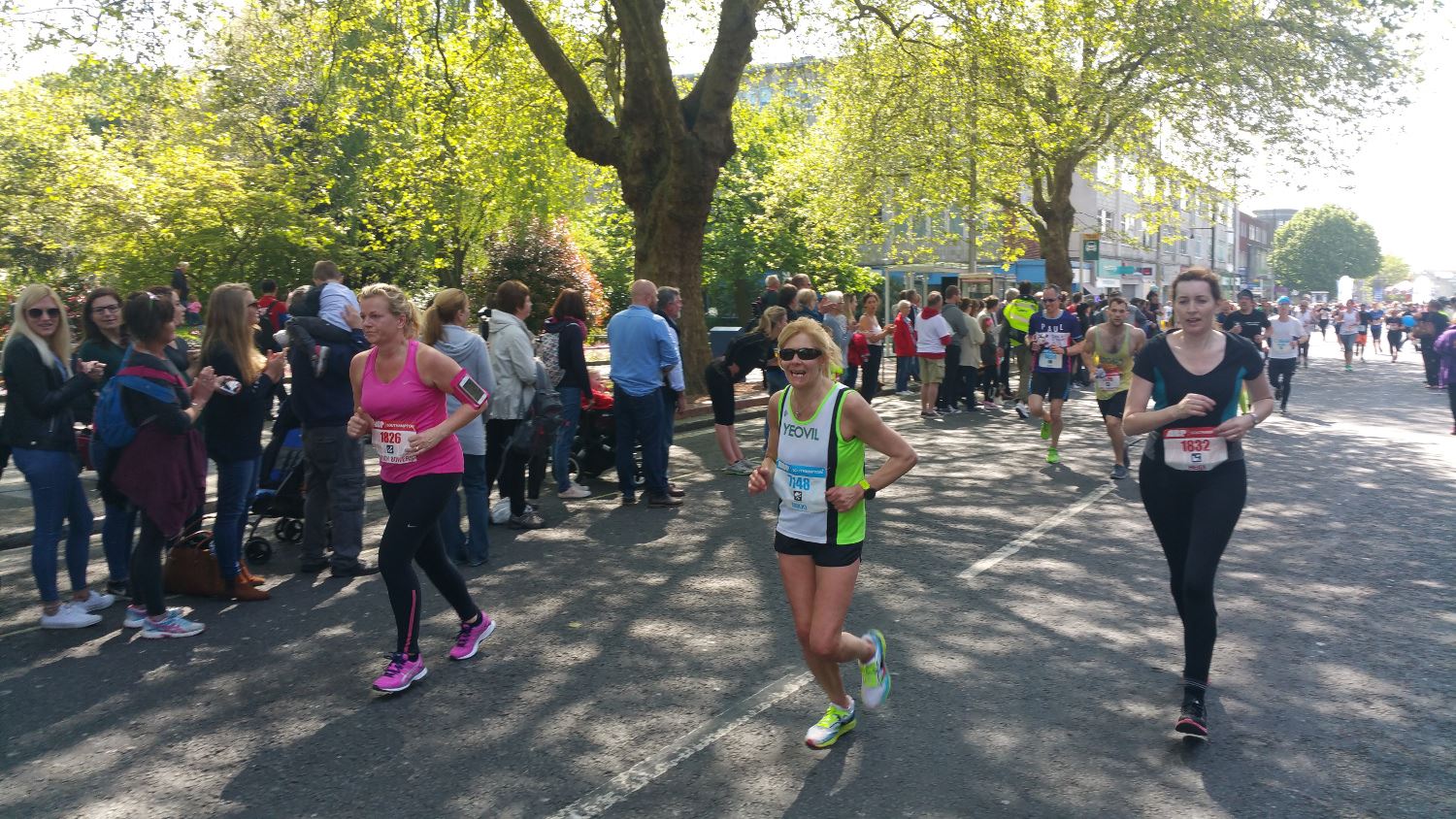 The new website is now up and running and the Blog will be integrated into the site and not on Google. You will need all to join the Club on the site but we will let you know what to do on Facebook or on here. Any feedback would be great and I would once again like to thank Chris Biggs for the Logo's and Richard and Tim Howes for the design and work they have done. Behind the scenes, Adam, Simon and I have been busy trying to get all this ready and more will be added as we go along and we will try to do more using the payment system to make this much easier.

Phil led tonight, and most of it was cross-country. A few yards from the pub car park we were off running across fields. Following the Monarch's way we ran through fields until we reached the Weir at Yeovilton. Some of this was along the river and there were old stone bridges. Further on, we picked up on the Leland Trail and passed some Polo horses. We crossed the Wood Bridge, ran across a field to a track, and Alison took the group photo. We crossed the road and ran down Hook Drove. A right turn got us bogged down for a while in a heavily ploughed field. We missed the planned Elborough Lane but ran along another track instead. This came out on the road opposite Manor Farm just west of Limington. The last leg was down the road back to Ilchester. It was nice to be off-road for such a long time tonight. Thanks Phil and all for a great run. 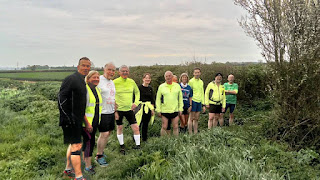 SUNDAY RUN FROM GOLDENSTONES
Several of us ran with Phil this morning from Goldenstones. We climbed above Aldon, ran down to Barwick House (and past JTE which was off to the left), and took some fields to Stoford. Continuing via Barwick, we went off across more fields, and along a track to the pub at East Coker. Past Coker Court, the lanes and tracks took us to a big house with a flat roof. We ran round a small wood which was planted in 1999. Back up the lane we then went onto sheep fields and continued off-road all the way to Burton (in East Coker). Paths and tracks took us to Nash. We furrow hopped across a ploughed field and came back into the south western part of Yeovil. A leasurely 9.1 miles in the sunshine and countryside was a nice run. At the cafe some of us then watched the London Marathon on a computer. It was good.