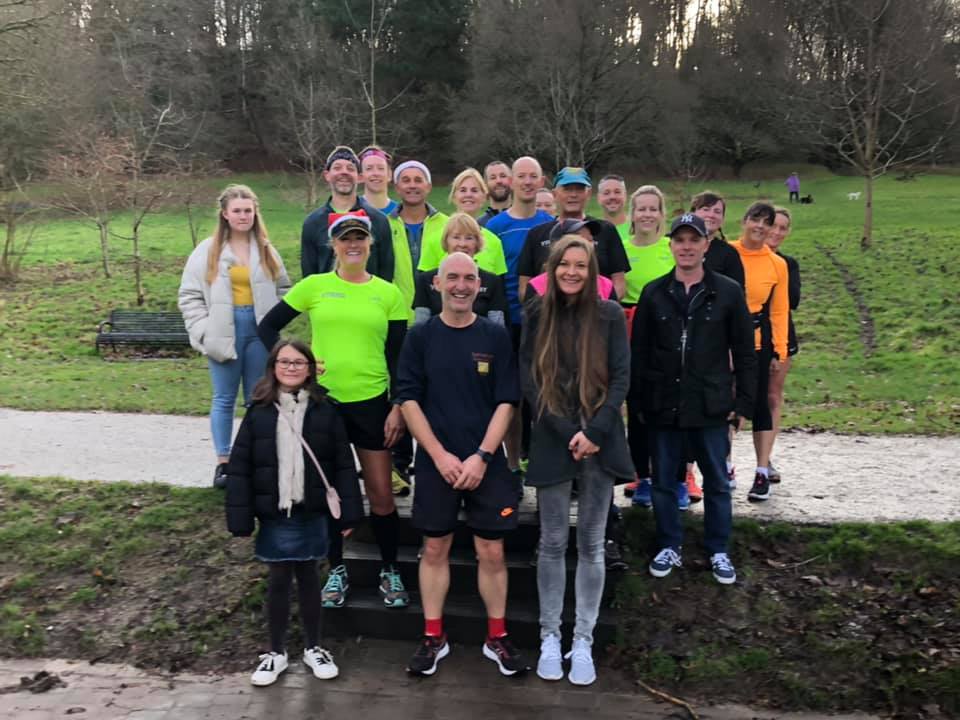 Happy Christmas to all YTRRC members, have a good one.

For the second year Graham organised the 100 or 50 mile challenge in a week, however no one decided for the 100 and we all did the 50. This is a challenge in it's self with the time of year and also the lovely British weather. To be on track you needed to try to get in 7.1 miles a day, from Monday to Friday this meant running after work in the dark. However Wednesday was horrendous weather with the Rain that started about 2pm and went on till late. There were only a few idiots in Yeovil that would bother to run in this....

The Pub Run did an extra loop to get to at least 6 or more but even the Donkey's thought sod this and ran off. Sunday saw the final day with two groups setting off from Goldenstones, one doing the Yeovil Half Route and another an 8 miler, both groups would meet at the Football Club and then all run back to Goldenstones together taking the Half route. We ran through the town on the Road by Denners and then down the Quedam with a few strange looks from people getting their Christmas Shopping in.  It was another great week and very rewarding for all those that took part. We all then went to the Coopers Mill for a well deserved Drink and a bit of Food. Well done to all those that took part and thanks for Graham for getting the ball rolling and Kev and Lesley for sorting the last day out. 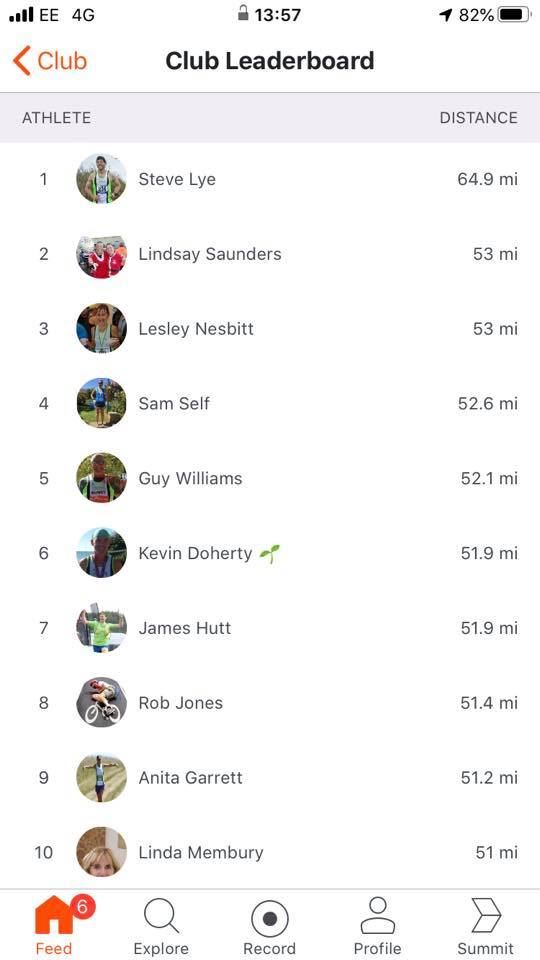 Yesterday we took part in the Extremely Jolly 10k at Escot, an extremely muddy and wet course with a 30m water slide that continued 15m more in the mud, great fun and will be doing it next year. 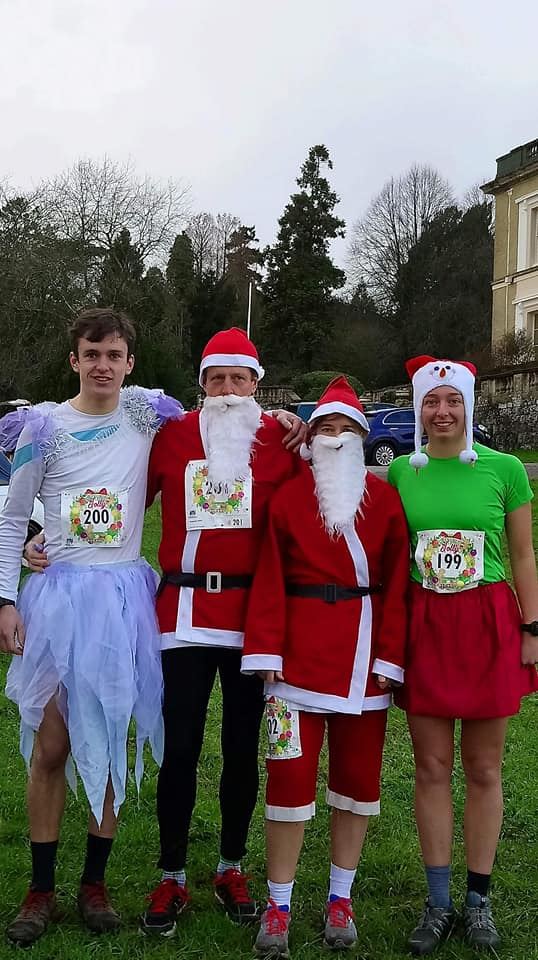 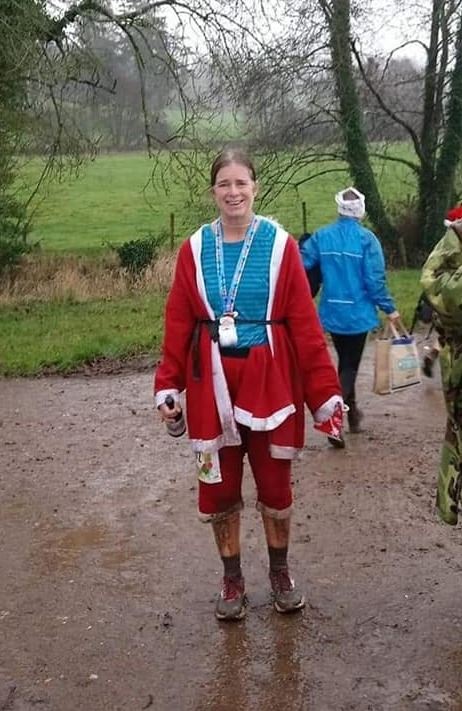 From Holli: Portsmouth ‘Festive’ Half Marathon - not one I’ll be repeating but at least the medal’s quite nice! Very narrow, flooded, muddy, smelly, and nothing ‘festive’ about it! Almost got my first DNF as struggled badly with blurred vision and dizziness (body still adjusting to new medication) but managed to plod to the finish. Thanks to Jon for catching me in my fainting moments, and at least we got got first (and only) Yeovil! 🤣 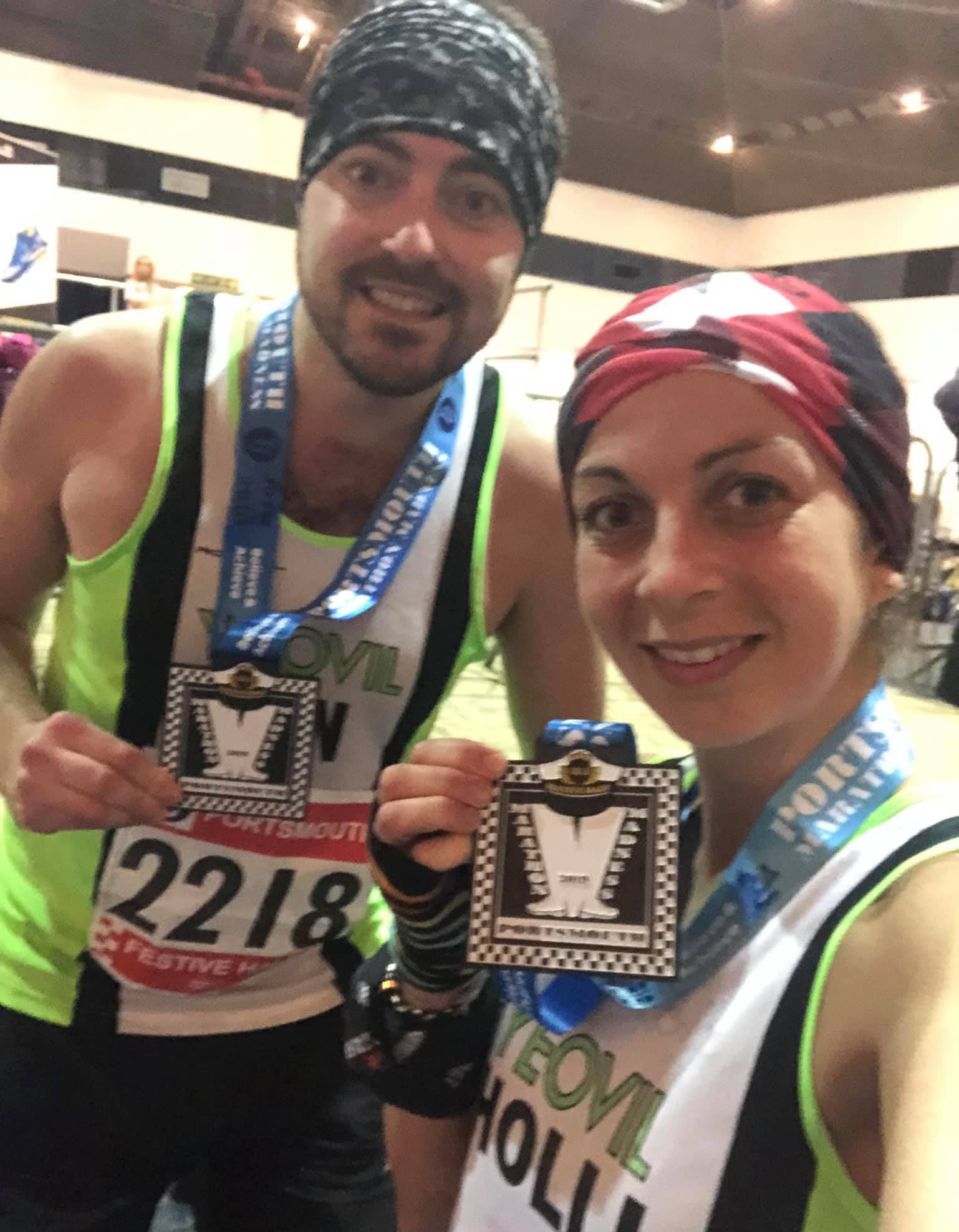 Due to Montacute being Cancelled Lindsay had to settle for Henstridge for her 100th Park Run. 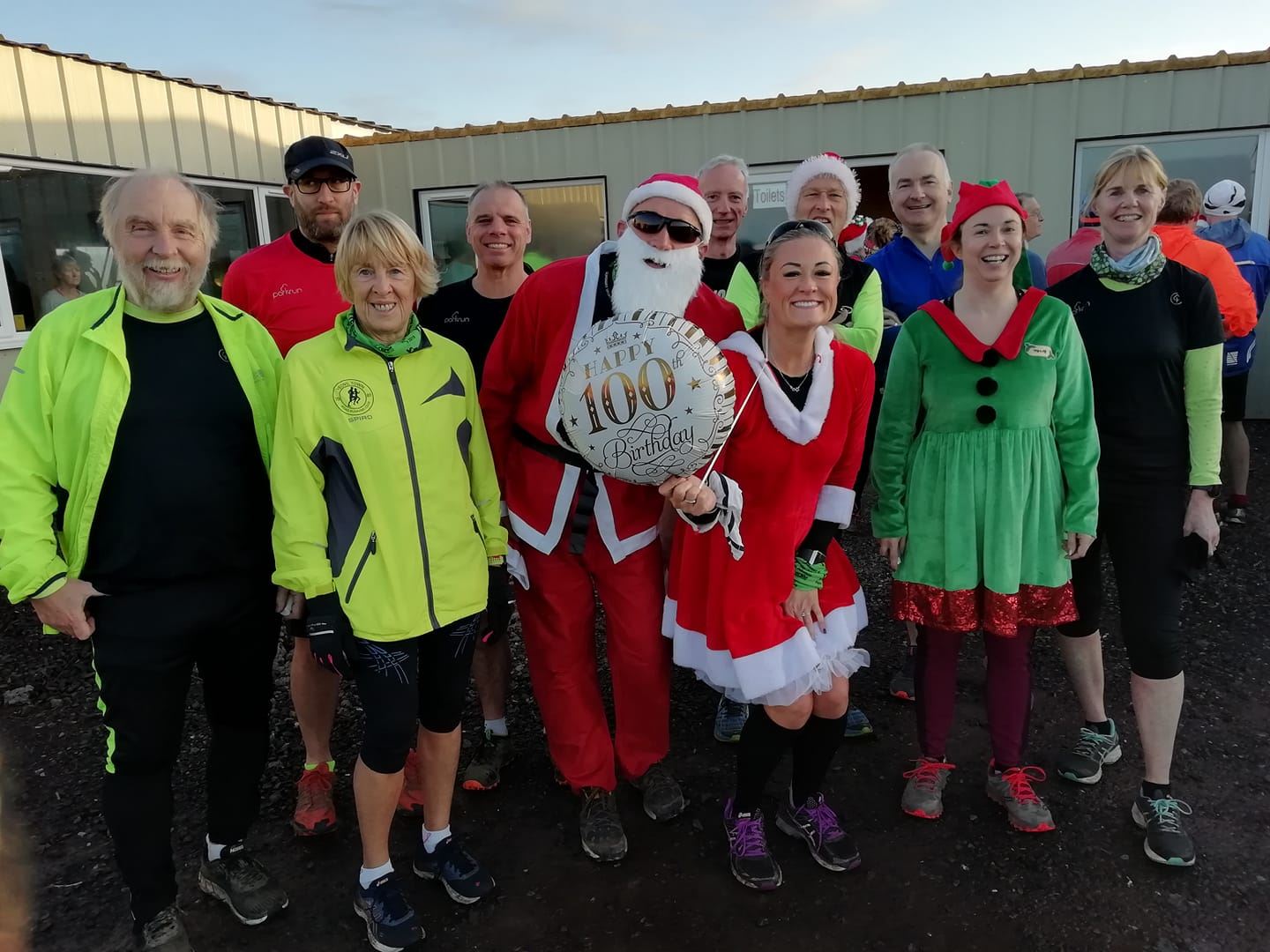 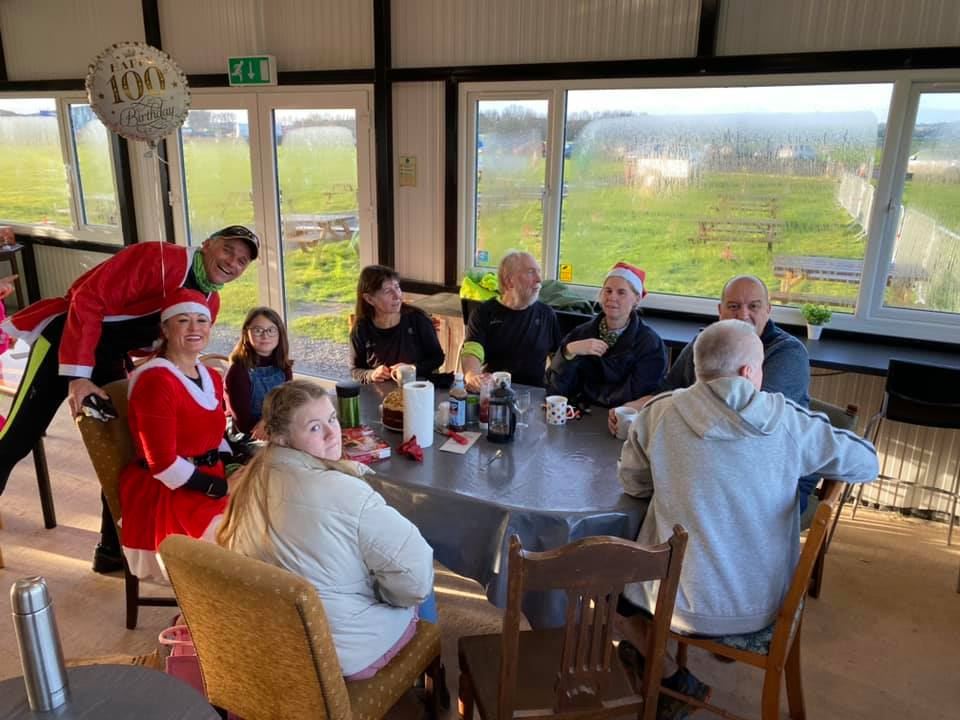 Running in the Cold

From Emma Jane: Back in Canada for the hols with Jon Palmer. Run this morning was -15C (-20 with wind chill). No running in team vest this week. 🤣 it is supposed to warm up a bit next week. Headed out now to cut down a Christmas tree! 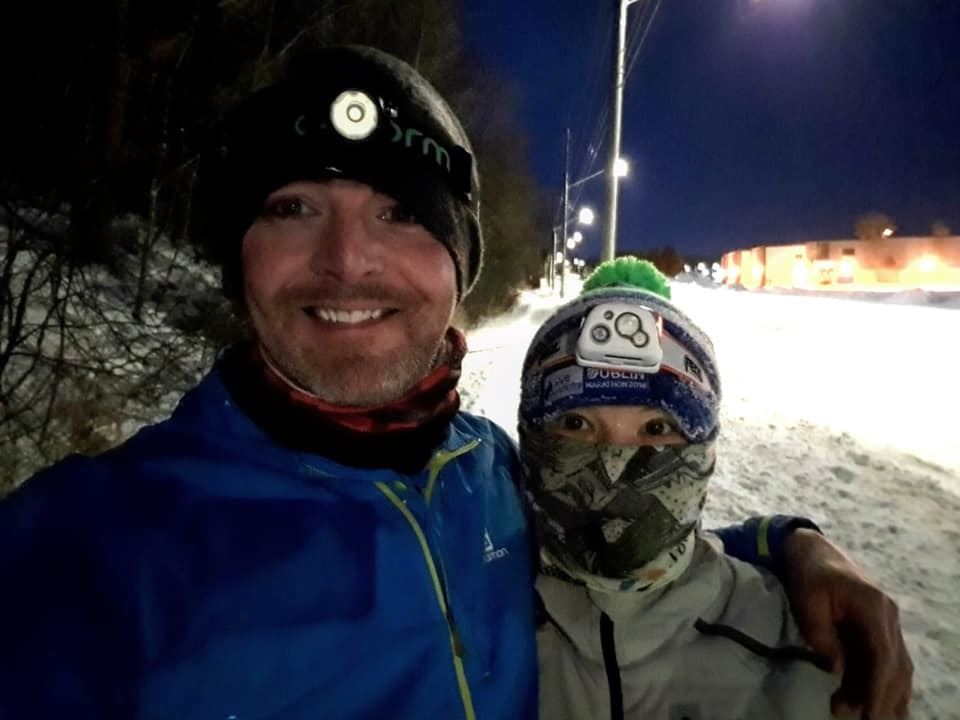 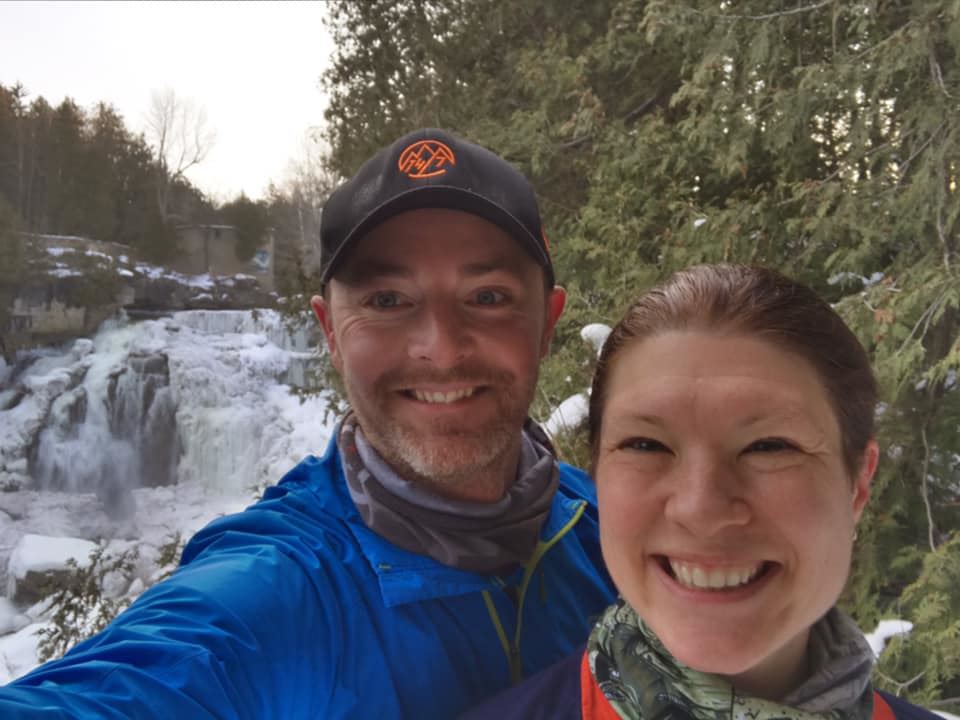 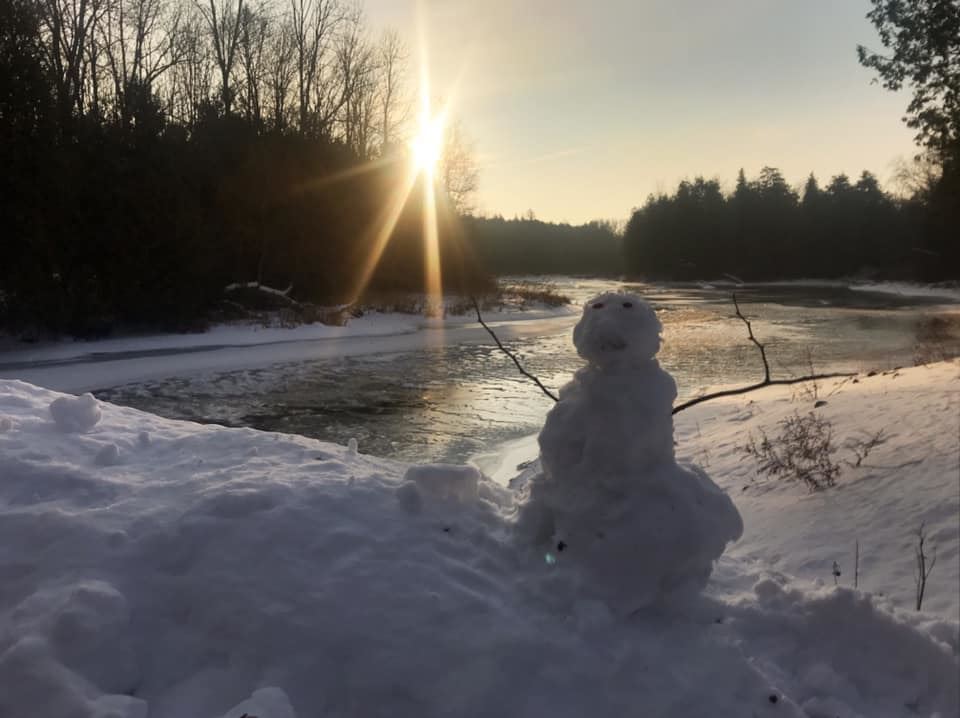 After the floods we arrived at the pub at Hardington Moor. It was dark, rainy, and windy. I led eight (Steve W, Lyndsay, Lesley, Anita, J.C. Rob, Guy, and myself). Phil, and David, formed another running group. Leaving the pub, we ran and climbed along the lane reaching the church at Hardington Mandeville. Two donkeys greeted us from the green in front of the church. Unfortunately they didn’t hang around for photographs. We continued westward along the narrow muddy lane and reached the junction with Partway Lane. Turning left we ascended and reached Hill Cross. We turned left, and took the right fork. We climbed and ran along the southern edge of Hardingtom Mandeville. Phil and David passed warning of floods ahead. We continued along the lane heading towards Pen Cross. We had to pass through two floods, but not too deep or long. The lane took us down to just outside of East Coker. Turning left we ran to Beryl Knapp (which is a junction and not a person). Turning left we climbed to the top, then down the other side back to the pub. We had only done 5.5 miles, so continued along the muddy track. The lit up church was visible up on the left, so we headed for it. Hounds were baying in the distance. One came out as we passed, but he was good. At the church we were disappointed that the donkeys had not come to see us again. We ran back down the road to the pub. In the darkness, Hardington Moor down in the valley looked quite pretty. Thanks all, and to Phil for organising. Photo from Alison. Final distance 6.5 miles. 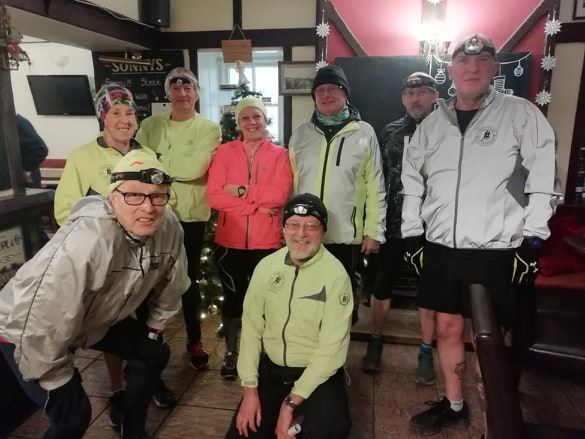