It's Another Giants Head 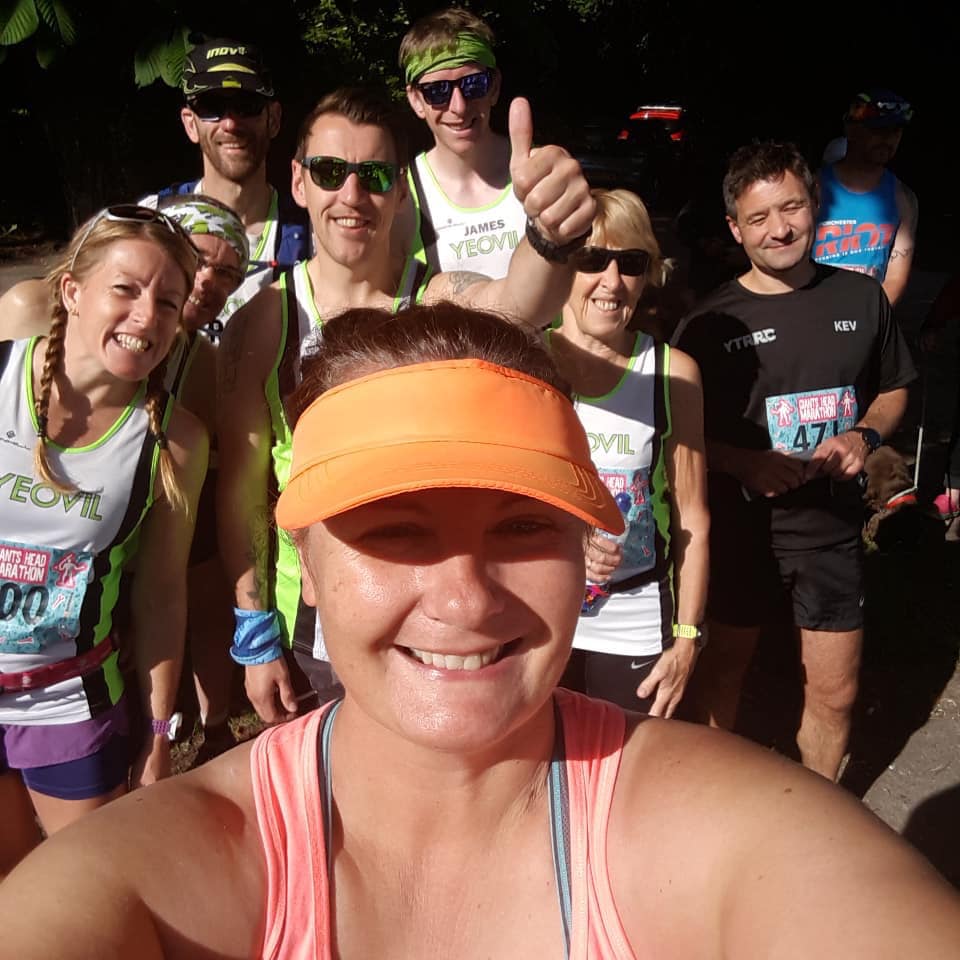 From Matt: Forde Abbey - I will book the Windwhistle for a meal afterwards (probably to eat at 9:00 so everyone can get there), as we've done previously, but I need names before Monday 7:00pm - let me know if you're definite :-)

Great " Road Trip" over the Bridge to Wales, 0500 alarm clock for Steve LyeRob Thompson and myself as Swansea Half was calling ... Decent journey 2 and half hours ... easy parking .. only snag was putting up with Steve's Welsh " Lingo". Walked to HQ, toilets seemed adequate, bag drop into trucks and we were away 10am race start.. Steve had been feeling unwell all week and not going to go ... but last minute decided to make trip ... ( actual photo of him at end buying food).. creditable finish in 1:32:33 which he was disappointed with. On form Rob really wanted sub 1:40 went well up until 16km and faded to 1:43
I bumbled along at heart rate training of an average 126 BPM for 2: 06. Lovely scenic event into town and along coast turning at Mumbles with the coastal path back great crowd support .. weather was dry ... but humid.. great day out with these chaps. 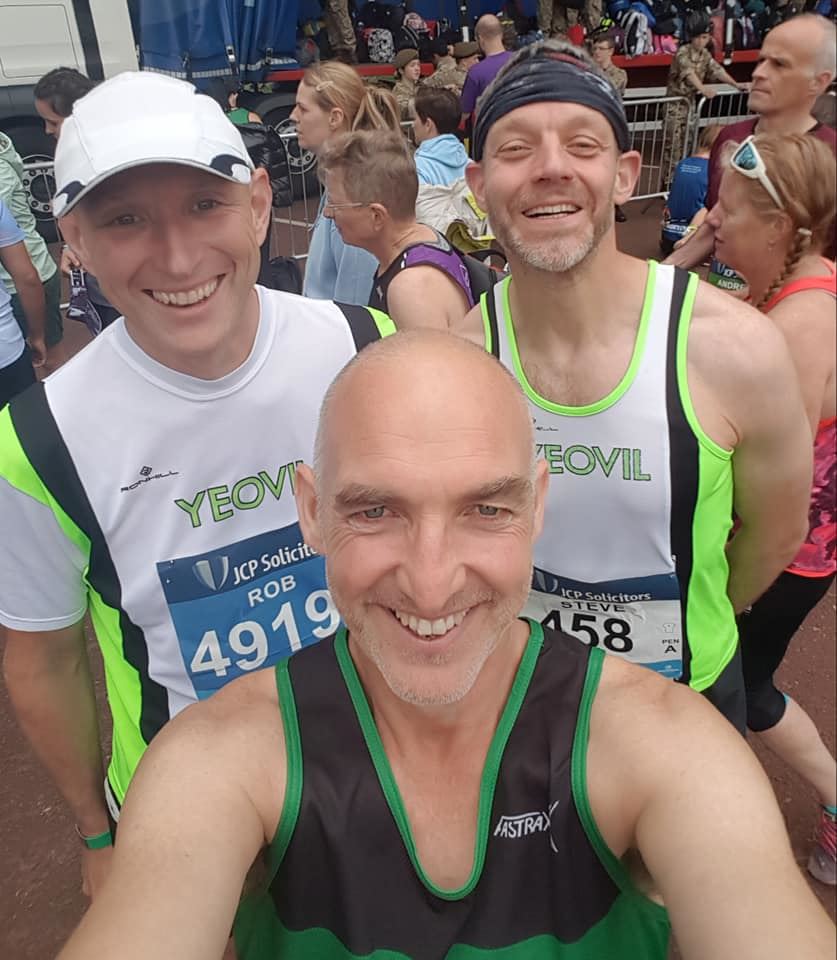 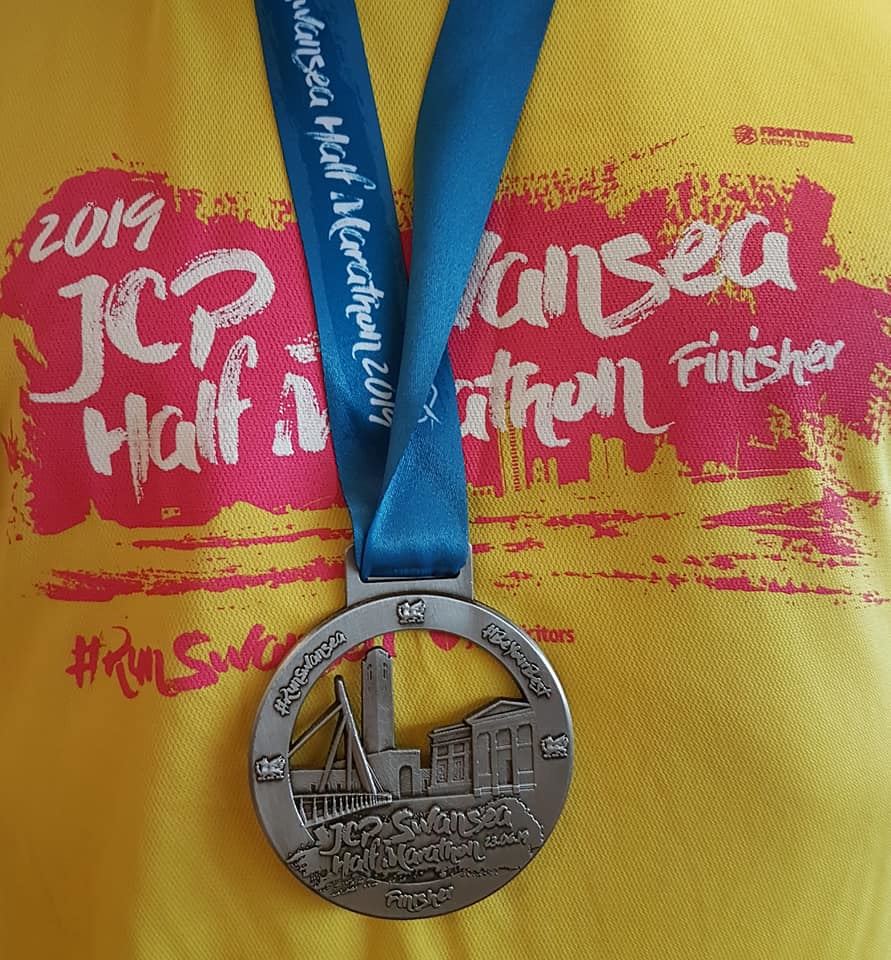 Today saw the Giants Head Marathon with a great turn out from the Club, on a great sunny day we had Keb Brettle first over the line for the Club and Helen Nesbitt was our first lady. 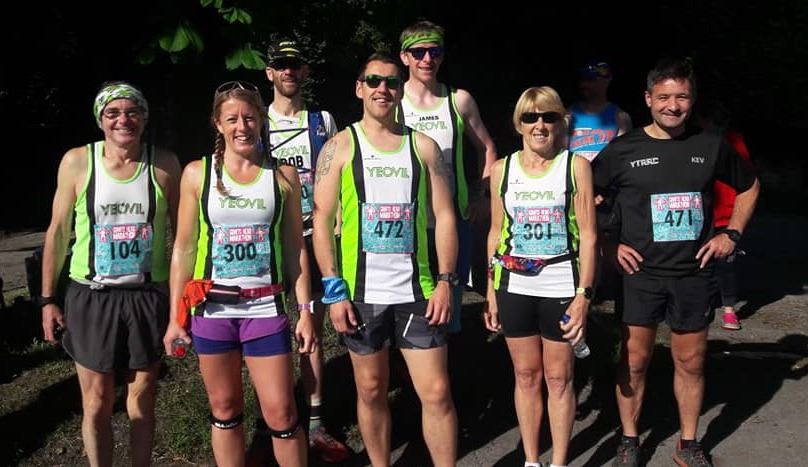 From Helen: A great day out yesterday at Giants Head Marathon (as tough as it is, still my fav off road one!). Good YTRRC turnout, some great times achieved (cheers for those pics Katy). Longest I’ve ever taken to complete it this time but mum (Lesley) and I only planned an enjoyable steady one having not run further than 10miles since London so happy with that! It was nice to have the company of Rob and James for the first 11ish miles, stunning views (thanks to Rob for those photos). Shame mum had such a spectacular tumble at 21.5 miles causing her to face plant the ground...thank goodness for her sunglasses saving her eye (although she has quite a shiner this morning bless her), being the hardcore runner she is still managed to finish the race! Rewarded ourselves with one of the famous whippy ice creams - yummy despite an additional marathon queue lasting an hour! 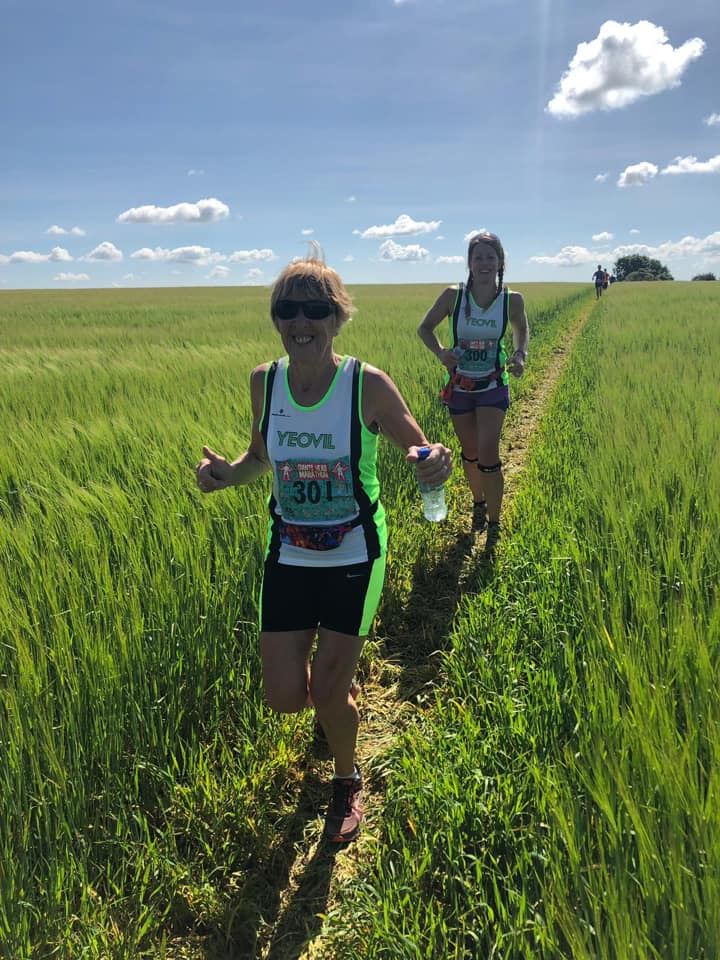 From Linda at Montacute: Today's parkrun. Very sunny day. Mark Pike first outing. I was chuffed that I beat him today...I know he took it easy but I'll take credit where I can 😁. Well done everyone. 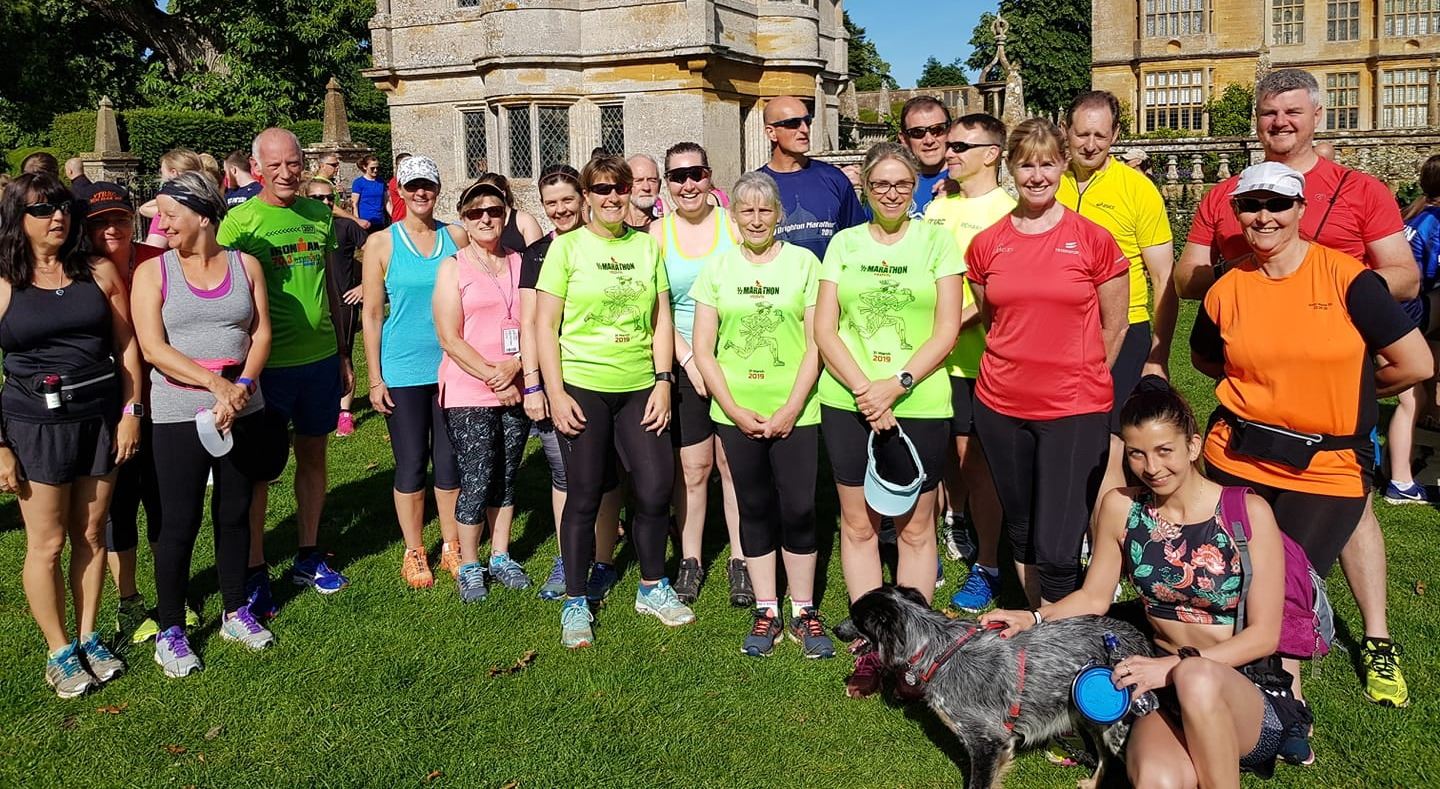 Up at Chippenham tonight so took this opportunity to fly the club flag at the DB Max Longest day, 10k. The course starts in the town center then out on the trails then back on the road to the finish. Time 43 30. 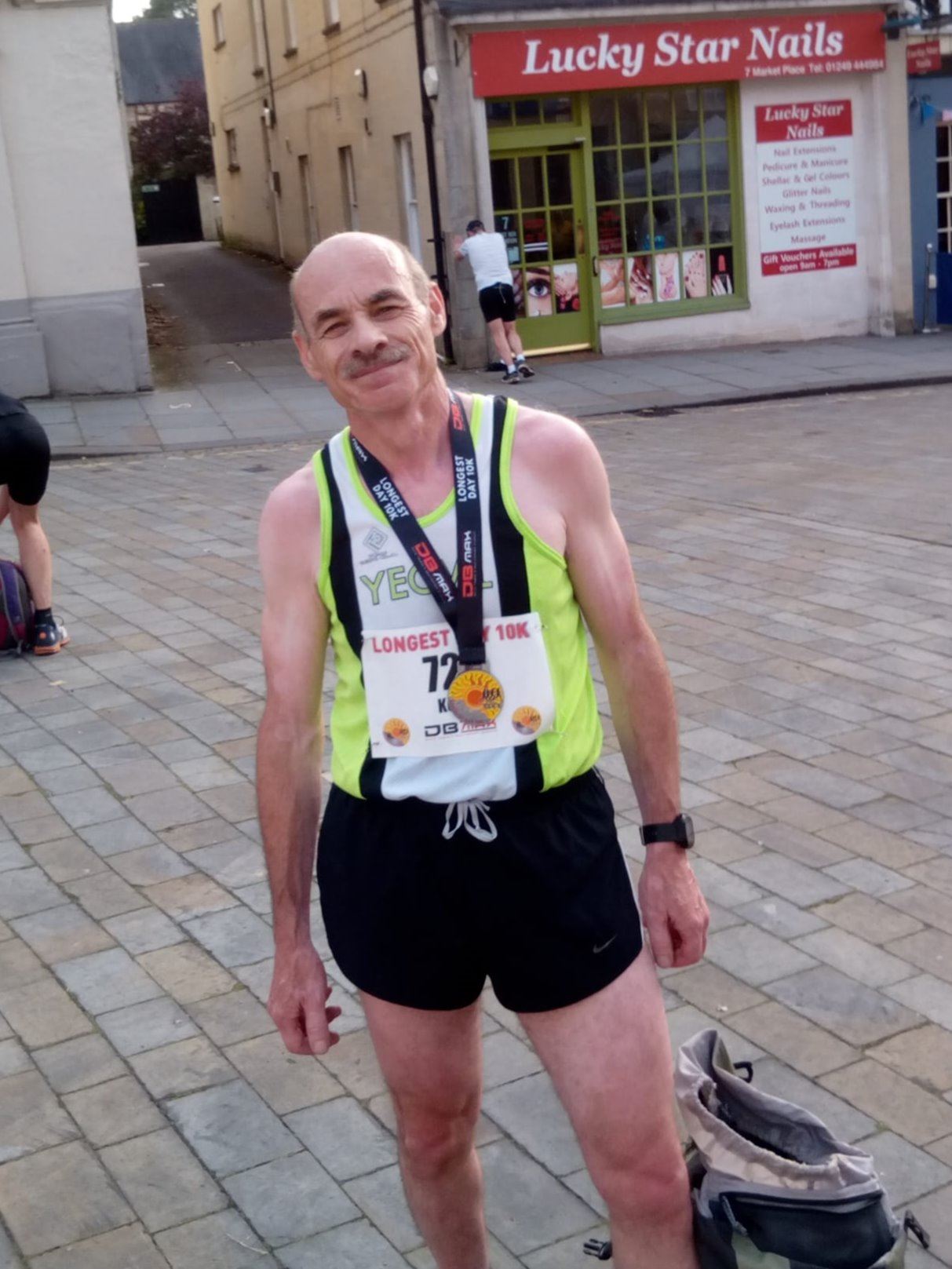 The main running group tonight consisted of J.C. Louise, Brian, Denise, Alison, Beryl, and myself. Four of us initially elected to run the regularly used route which had to be revised early on due to a footpath being severely overgrown. On all previous occasions this footpath was definitely usable, but not tonight. Instead, we all ran westward from the pub along the lane to the staggered crossroads. Here we split with J.C. Louise, and myself turning left and running up the hill. At the top, the entrance to the woods was clearly signed as private no access. On all previous occasions, we had used it thinking it to be public access. This time we had to find another entrance to the woods, 200 yards down the road. We continued running the paths and tracks through the woods until reaching the Admiral Hood monument. Fantastic views to the left along the way. We descended to the road and then ran off across four wet fields until reaching another road. At this point, the others appeared from the north and re-joined us. All together we then went off-road again running across two fields and then entered an orchard. Further on there were some old cows and an avenue of Yew trees. We navigated two more fields and reached the road at the edge of the village. The last leg was along the main road back to the pub. The distance was 5.4 miles for 3 of us, and possibly more for the others. Thanks all for a great run in the countryside. At the end of the Pub meal, we had Fez’s two birthday cakes. 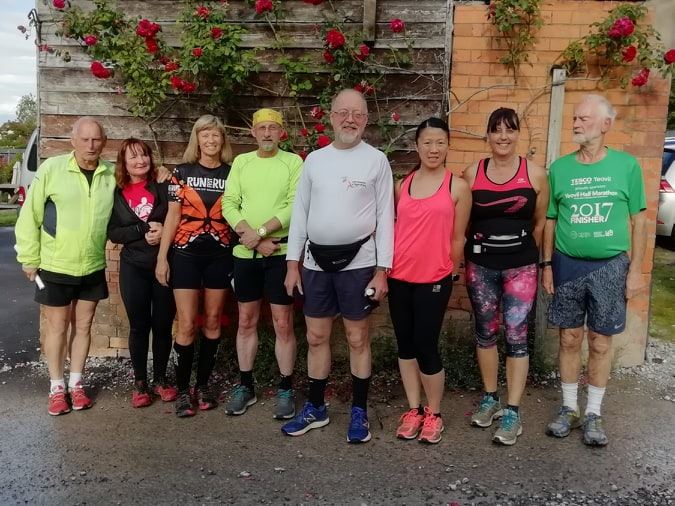 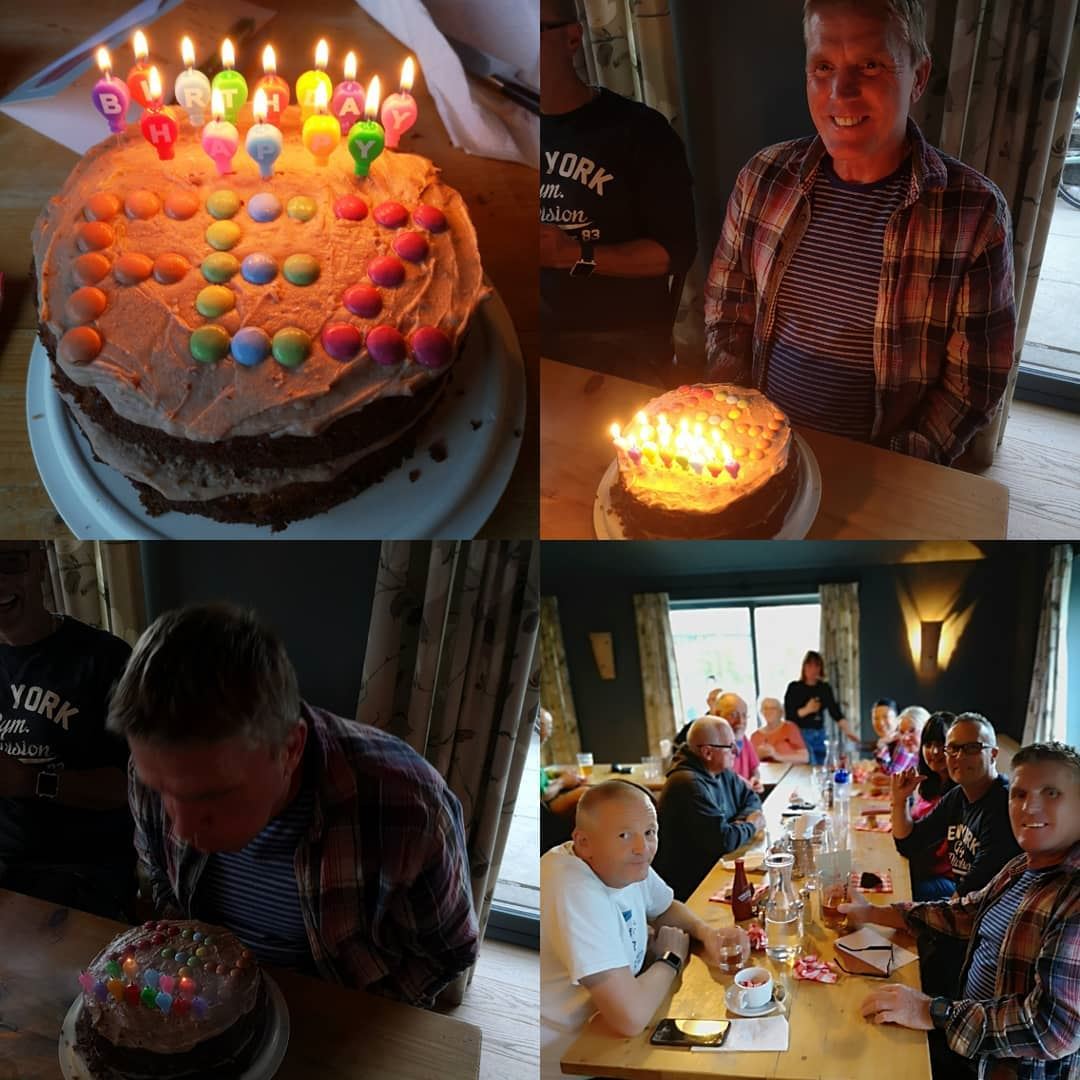