Its a Long Way to Lyme 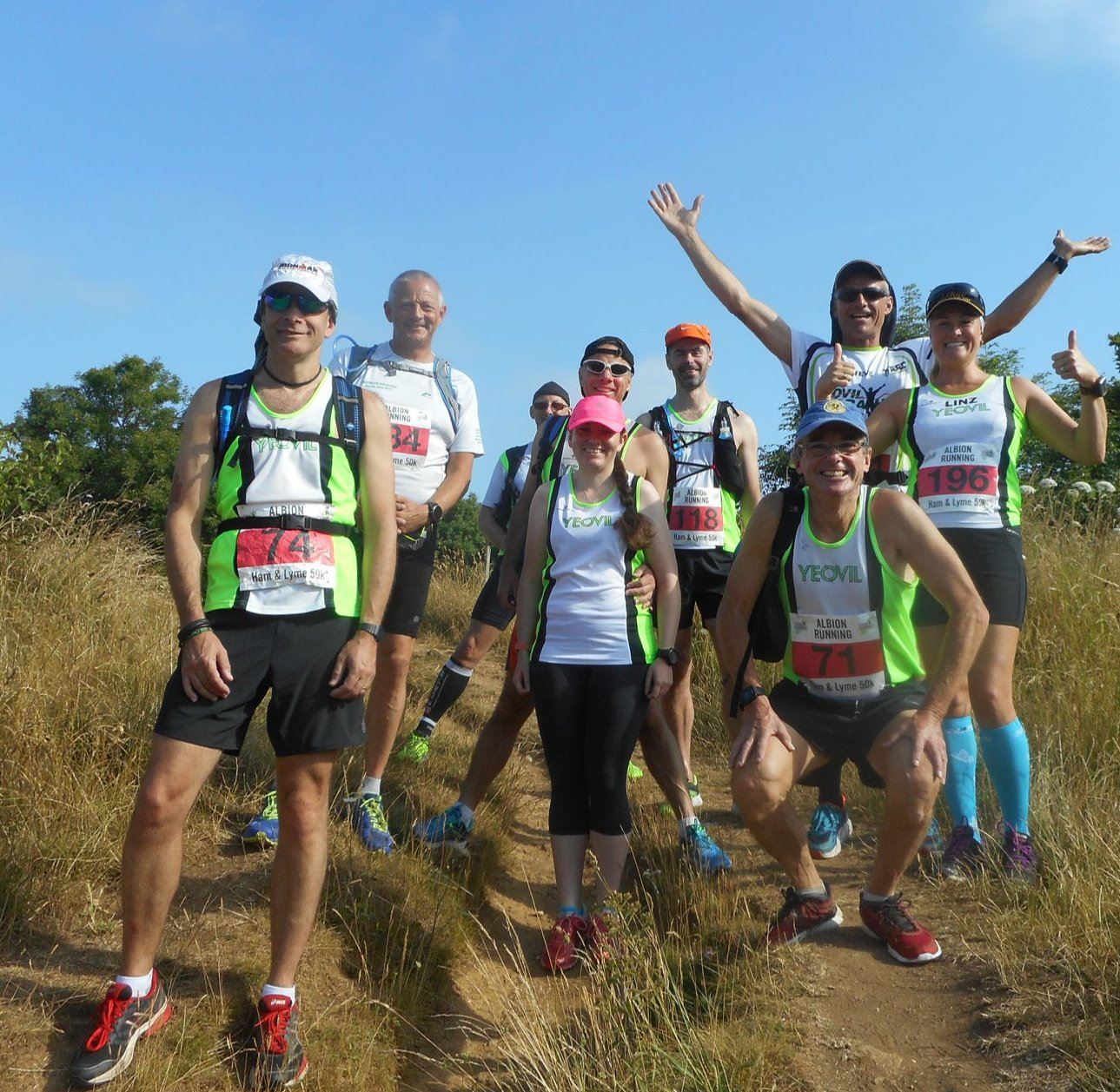 Saturday was the fourth running of the Albion Running Ham to Lyme race starting from the Rangers Hut at Ham Hill and finishing by the Sea in Lyme.

We got up there at about 8:30 and got our race numbers and the start group phot and it was already hot. For some reason during the Race brief, we were asked if anyone had been to Ikea by the RD, seems a normal question to me??

The big issue might have been the hills or the heat or are we going the right way but no, it was what are we going to do about the football. With the kick off ay 3 the plan was heat there to watch the game in a pub in Lyme. Sadly the heat put a stop to that. As Nikki was the font of all knowledge on the route and better than any map or gps I decided to run with her and Simon. As we headed for the first checkpoint there was already some heading for Ham Hill that were doing the 100k. As we progressed there were a few Village fates taking part and the odd scarecrow. 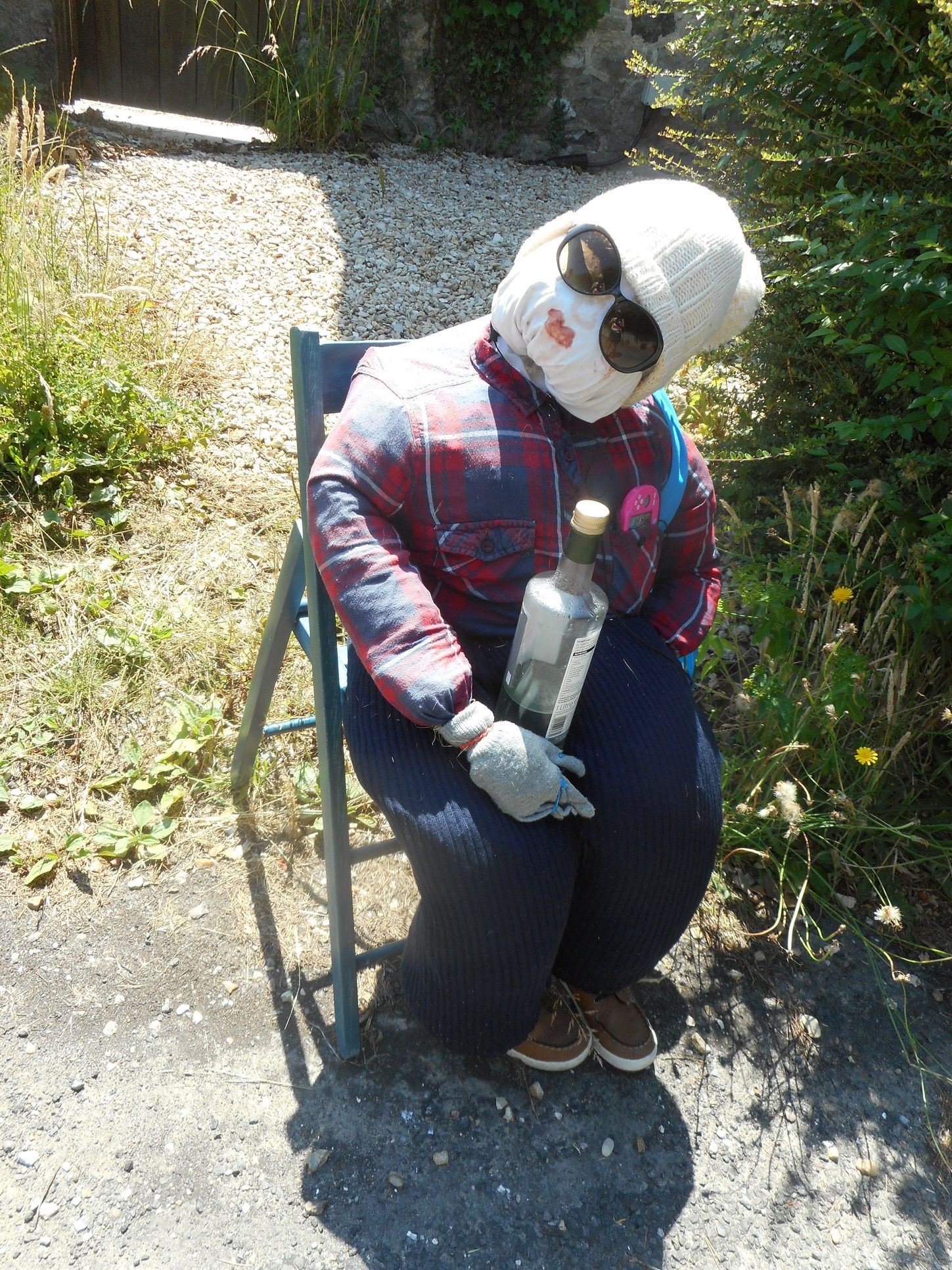 During the race you still had runners coming from all directions and they either missed the tape or lack of tape, the heat turned up a couple of degrees and each aid station was very much needed, the best was the farm who had water from their fridge sooo cold.

All three of us Nikki, Simon and I cracked on and met up with Matt and JC a few times but the heat was really slowing all of us down. 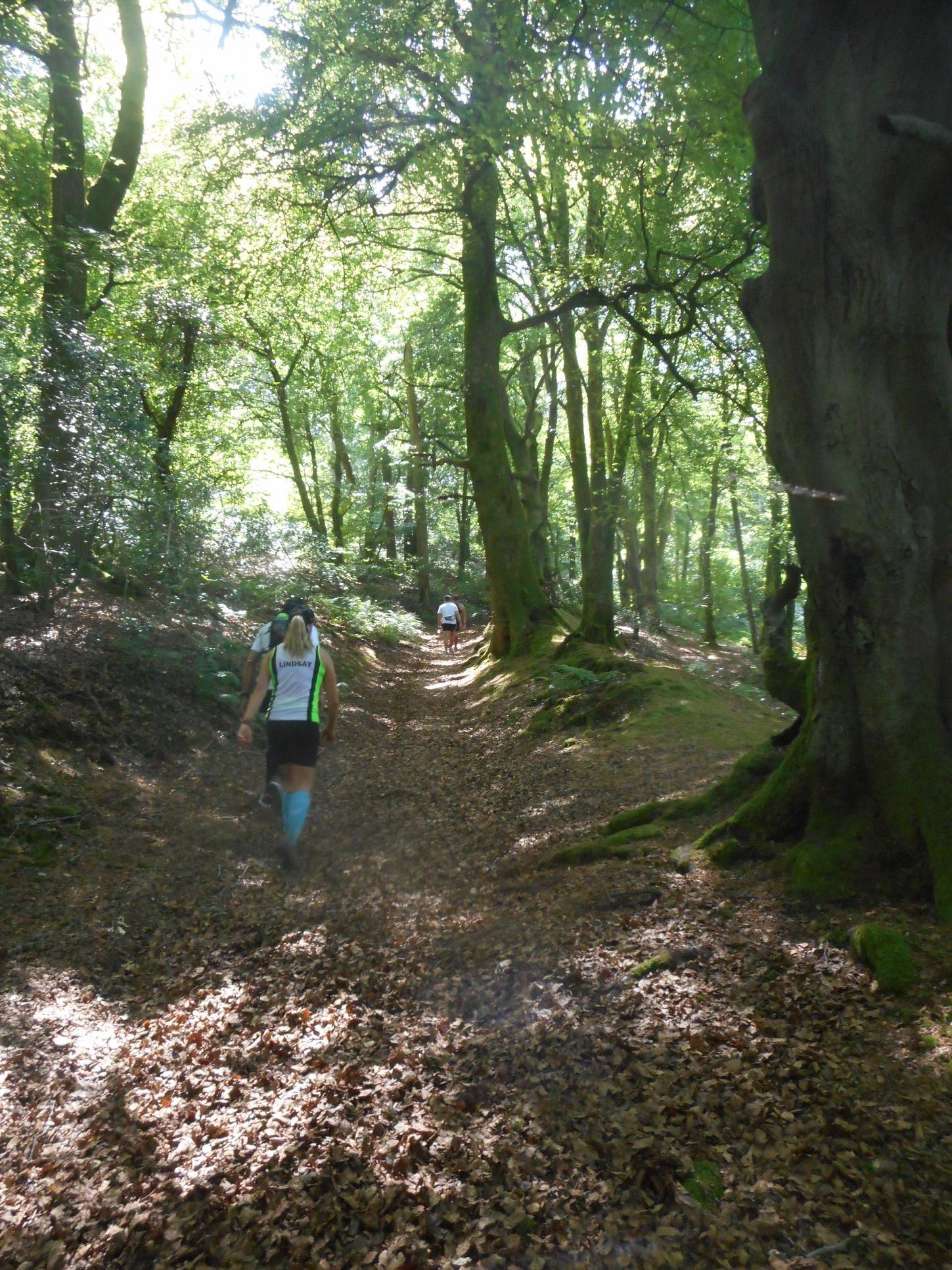 As the three of us got to Lamberts Hill CP Nikki was starting the feel the heat and took a few minutes to get some much-needed liquid and salt. Matt was also at the Aid station but left before us and the climb to the top. Us three left and made our way to the top but as I looked back I couldn't see them so decided to crack on and try to catch Matt up. On the way to the last CP I saw a few runners coming up the hill so had missed the turning into the field, it was there that I passed JC and then caught Matt up. I stayed with Matt until the A35 and last CP, Tim had just left as we got there. Matt looked done in at this CP but sensibly took his time and loads of liquid, I said it was all downhill from here but he said he would take a few minutes and get some rays in so I left for the last few miles to Lyme. The time was gone three so England had kicked off, I ran down the hill and into the woods and saw Tim. He had Radio 5 on his phone and told me England were 1-0 up, I looked at him and thought this might be the heat but the man on the radio confirmed it. I stayed with Tim till near the end of the wood and then headed for the line in Lyme. I got my medal and bag and headed for the beach, Tim passed me on the way so he was only just behind me. On the beach I got my phone out and watched the game while getting my flip-flops on, suddenly there was a great raw from a pub the other side of the beach and then the whole beach started cheering, it was a great moment, 2-0. My phone was about 2 min behind so I then saw the goal. Then it was off for a paddle. Matt, then JC and then Steve Linsay and Richard crossed the line and there was one more YTRRC runner but not sure if she finished, anyone know?

This was a hard Race, very hilly, very hot and bloody hard work so a very well done to all that entered and gave it a go, whether you pulled out due to the conditions or made it to Lyme a very well done. There are some placed available for Snowdonia Trail marathon next weekend..... 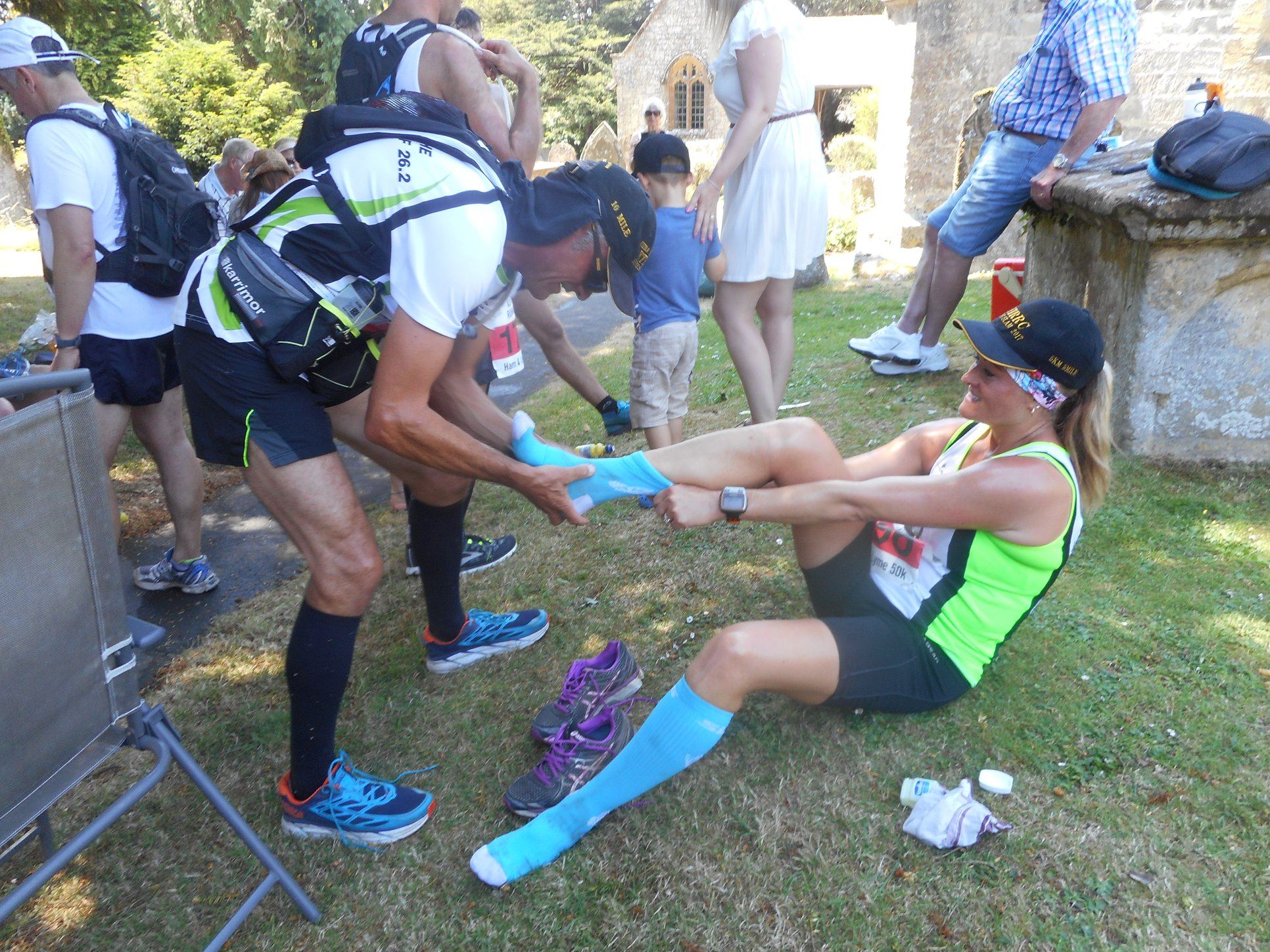 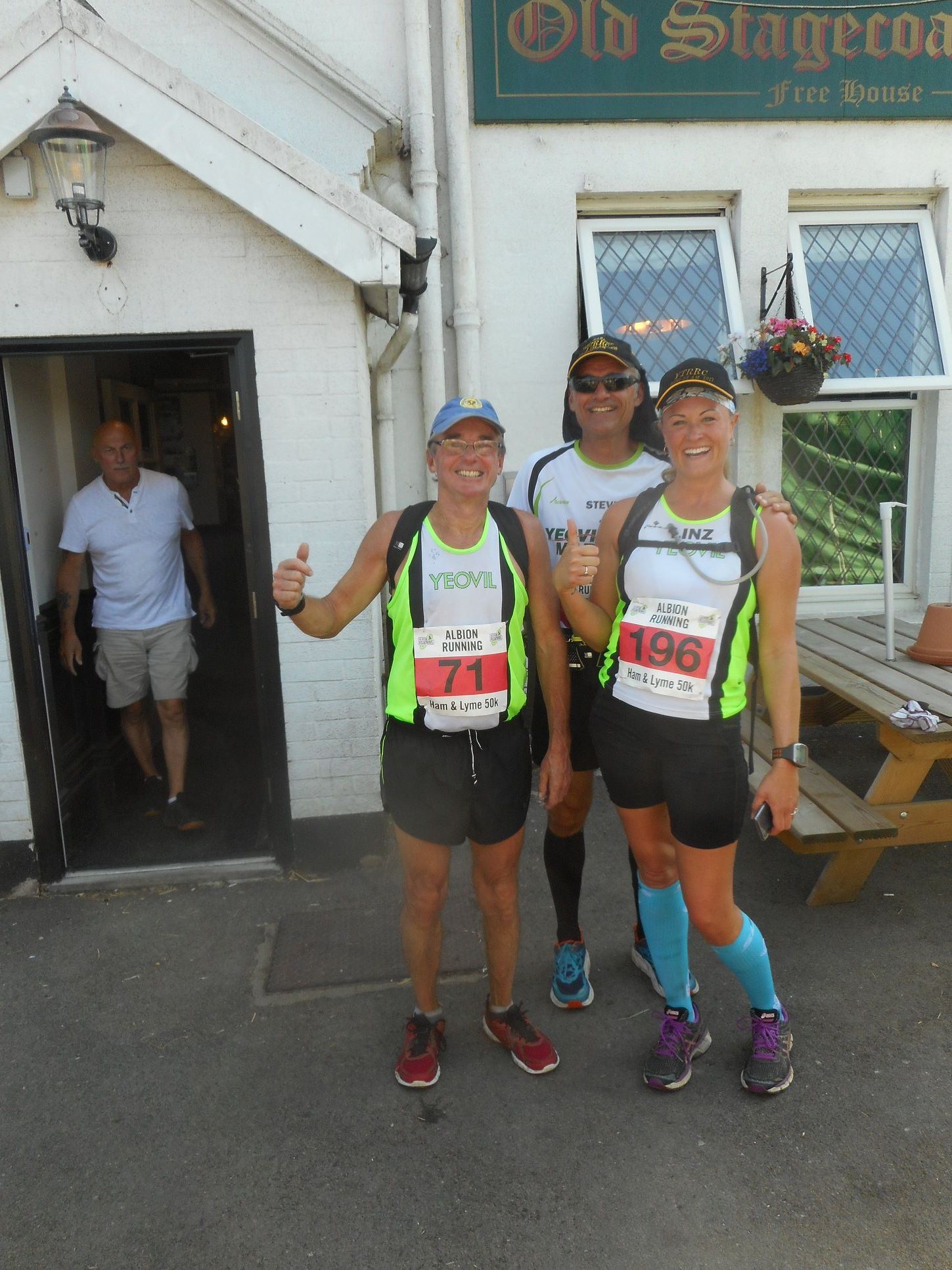 From Matt: Just about recovered now, although I don't think I'll ever stop drinking - thirst is unquenchable. I'd just like to add my thanks to all as I moved up and down groups: Jon Crane and Emma Jane at the beginning, thanks for keeping the pace steady and me on course, cruised past Richard Dodge, Lindsay Saunders and Steve for the banter, John Curtis for the map comparisons, Nicky and Simon Rowbottom for support when I was feeling ropey (kept it quiet though), and Bungy Williams for keeping me competitive. I've now a new respect for those that do back-to-back marathons and ultras. Shame I didn't quite catch Tim Howes! I think I'll drop down to nothing more than 100m for the next few years..... Dated 8th July

From Matt:  Where do I sign up for the Grand Union Canal Race (147 miles) Dated Monday 9th July

From Tim Willis: Multi-Tasking Kirsty Norman.
7AM registration for the Sherborne Sprint Triathlon and who do I see but Kirsty Norman with nothing better to do on a Sunday morning than a 500m Swim (pool swim) then a 20k hilly Cycle and to finish with an undulating 5k Run. Kirsty was up against some pros but came an impressive 57th out of a field of 88 and number 1 for Yeovil Town RRC with a time of 01:39:57. She said after the race it was good training for the Snowdon run next weekend. Well done Kirsty 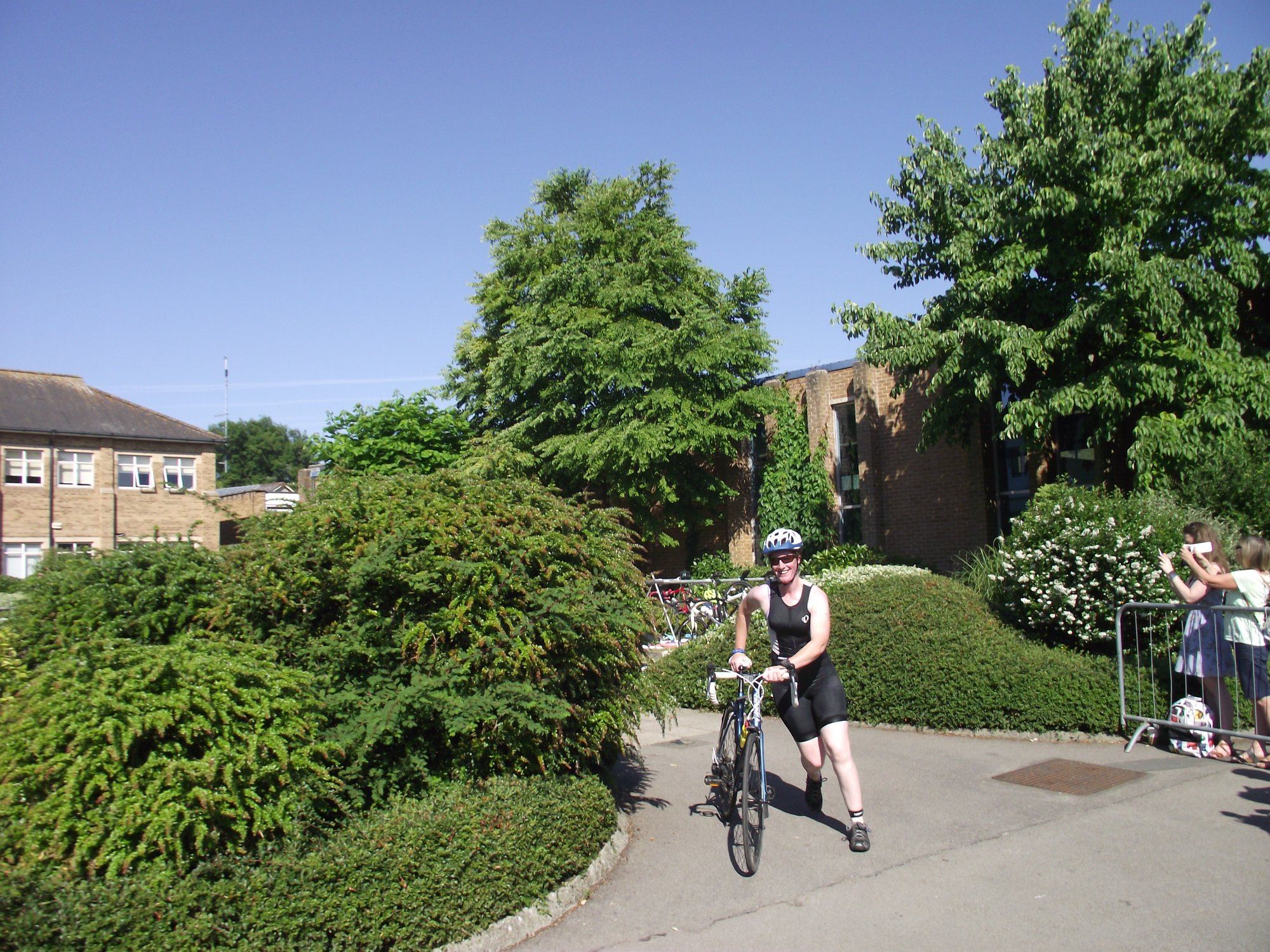 Hi all. Yeovilton 5k is a week today and help and Marshalls are very much appreciated. Please let me know if u can help, or pace or set up. If you like yr regular position or duty or anything u particularly want to do on the night please let me know asap so that I can set up a list and circulate it before the night so we know what we are doing. Thanks in advance. Race Director Linz

From Adam: Dalby Forest Park run, Yorkshire. Lovely one lap course through forest and river valley, with Corinne and Robbie 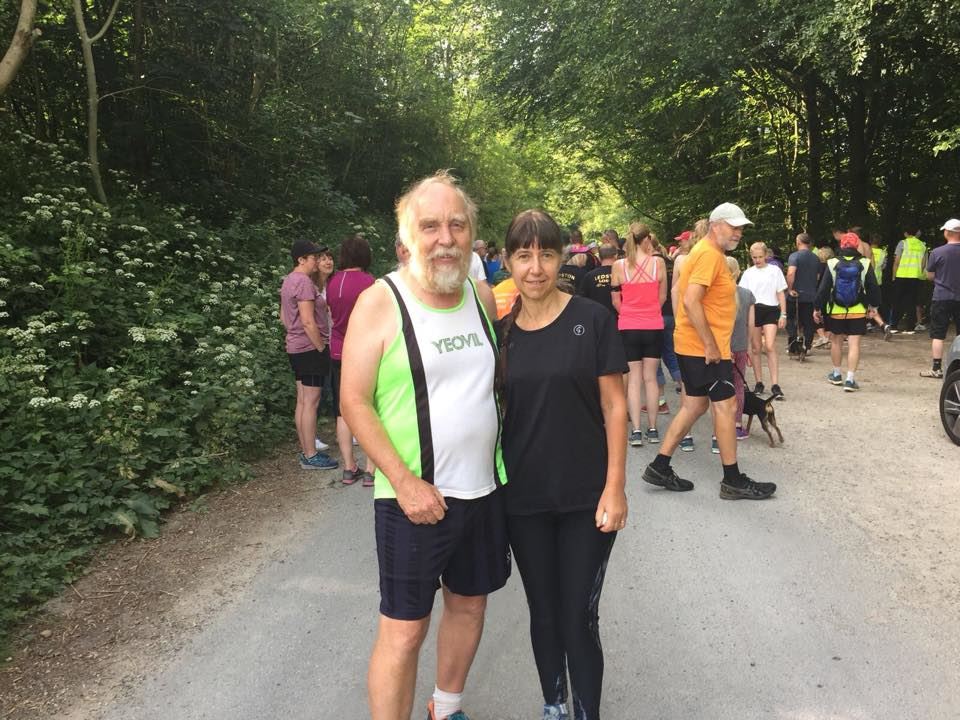 From Katie: 2 teams of 2 took part in White star running Cider Frolic near Blandford. Myself and Nat were team 'snails & ales' with Kat and Claire as the other pair. Lovely route, not to hilly and a visit to the love station. But the heat made it tough. Snailes and Ales managed 18 miles and kat and Claire 24 before the heat told us to be sensible and stop.  Amazing medal, squeaky pig and bottle of cider.  Well done all running today. 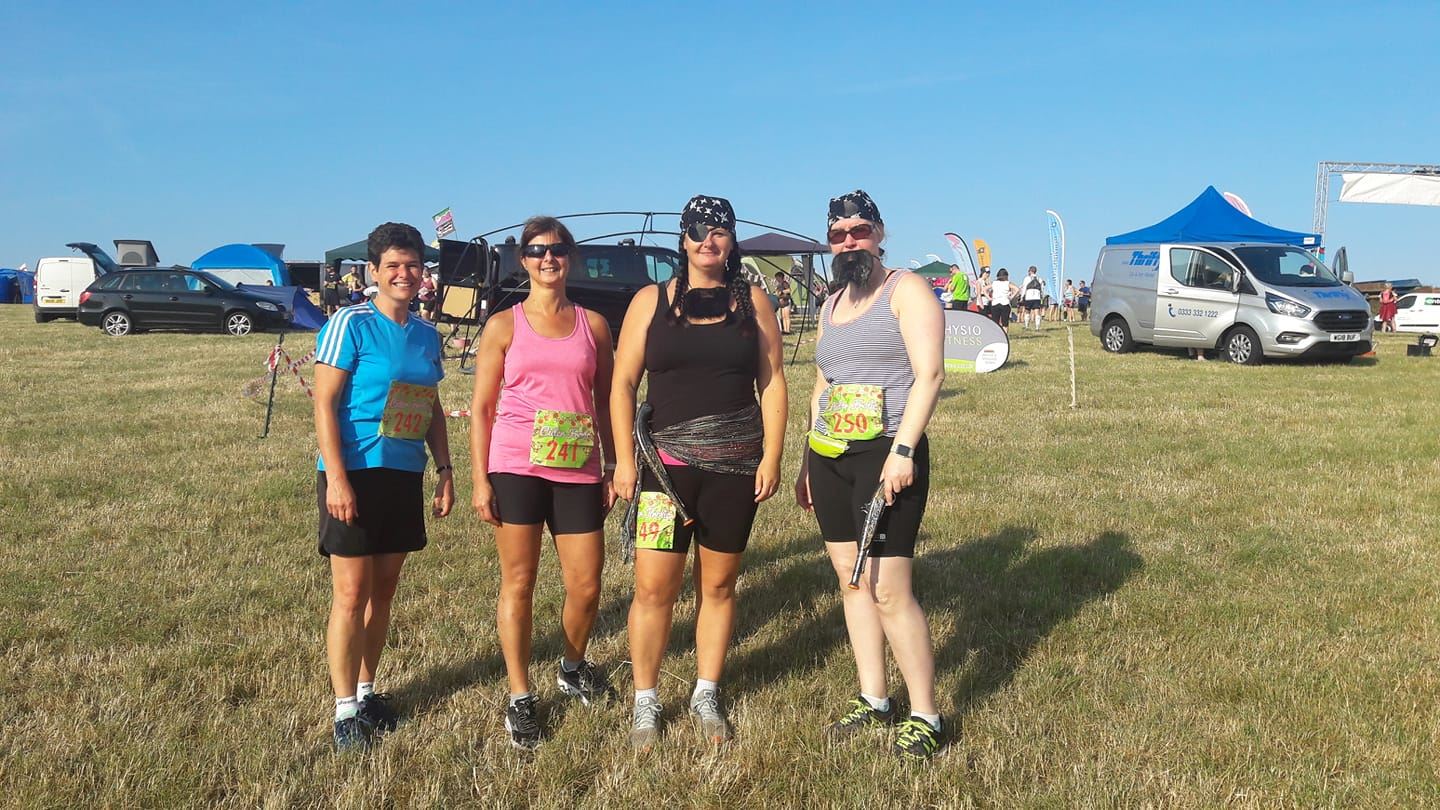 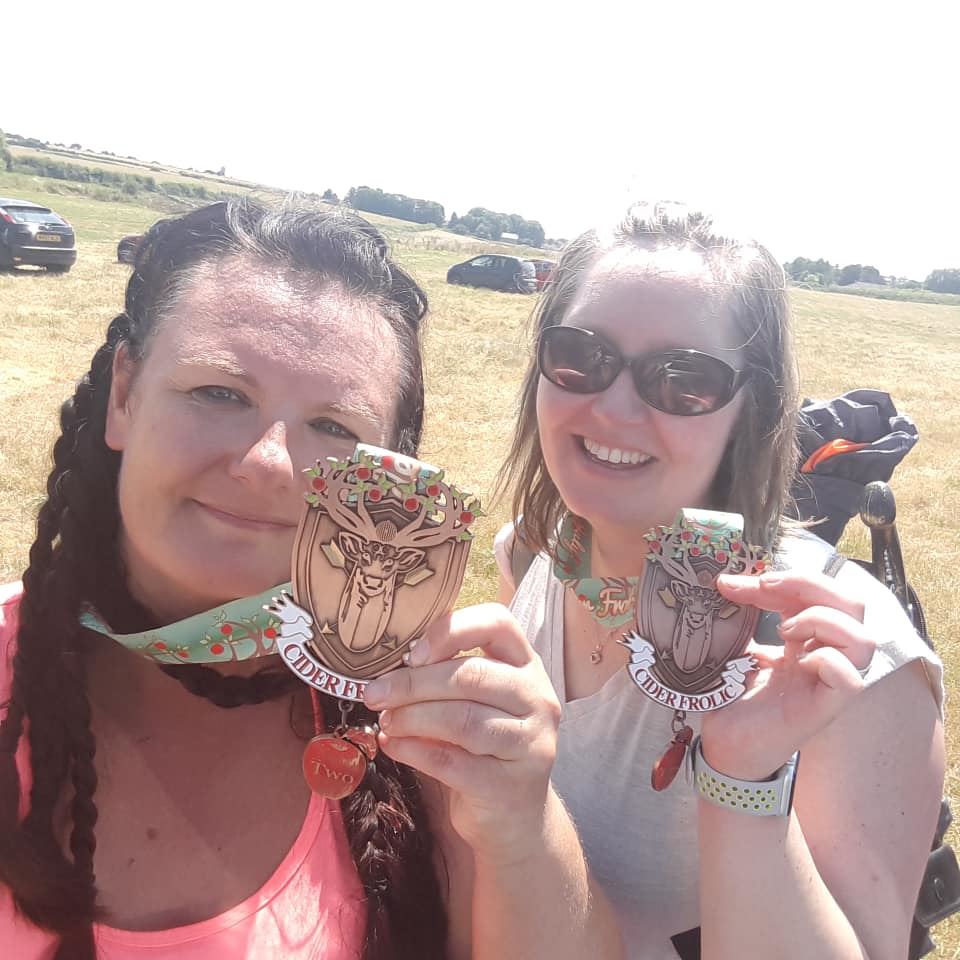 From Lesley: Just two YTRRC runners taking part in Charmouth Challenge 8ml today, Chris Williams and myself. Certainly, a beautiful day to be running at the seaside despite the heat and the hills. Follow this by a lovely cool dip in the sea, lunch at a local cafe and a Mr Whirly, then off to two wedding dos. Perfect Saturday 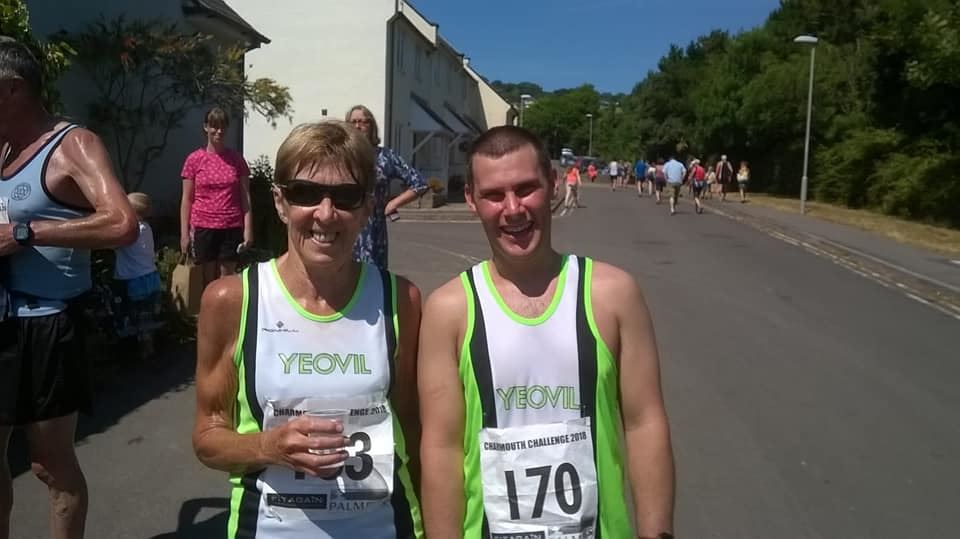 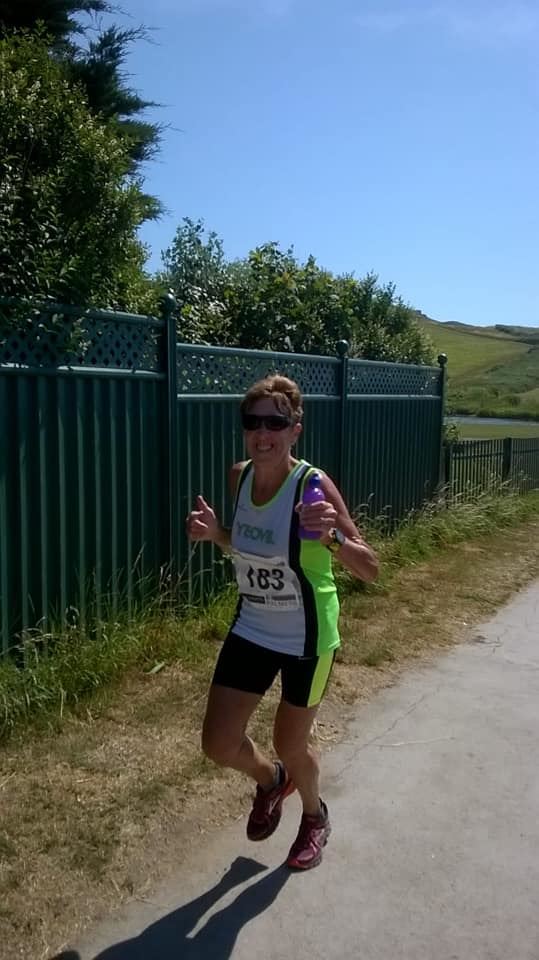 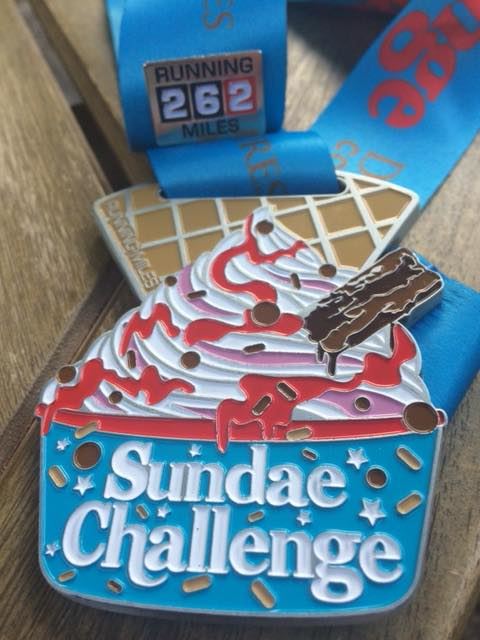 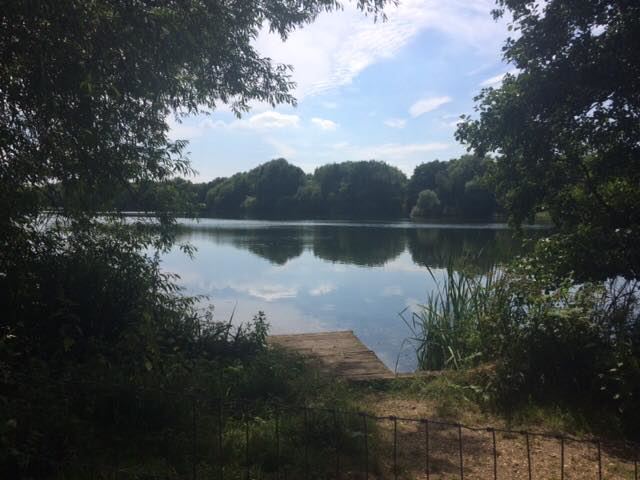 PUB RUN – CURRY RIVEL (5th July 2018)
Adam organised the Pub, and I had the pleasure of leading the main group. It was suggested we could do the multi-terrain route of last time in the reverse direction, but in the end, I opted for an all “on-road” route. In fact we ran a winter route in reverse direction instead. The group was small (only six of us - JC, Gareth, Georgina, Denise, Leslie), and it was very warm. We ran a clockwise loop going past the very grand church, crossing the main road, and running the lanes to Drayton, and Whitecross. Drayton has a pub that could be used for Pub Runs if ever the King William goes. We continued running, passing Guy, reaching the main road south, and ran down it for a few 100 yards. Turning right we were on lanes again with the sun bright up ahead. The next right turn became an ascent. There were loads of large dragonflies out tonight. It must be great fun flying one of those around. Before reaching the main road, we stopped to re-group. A large ginger cat came to greet us. The final leg was a couple of 100 yards down the main road back to the pub, where we joined Phil and Mel. Thanks, Adam and all. The Hot seafood rock went well with the weather 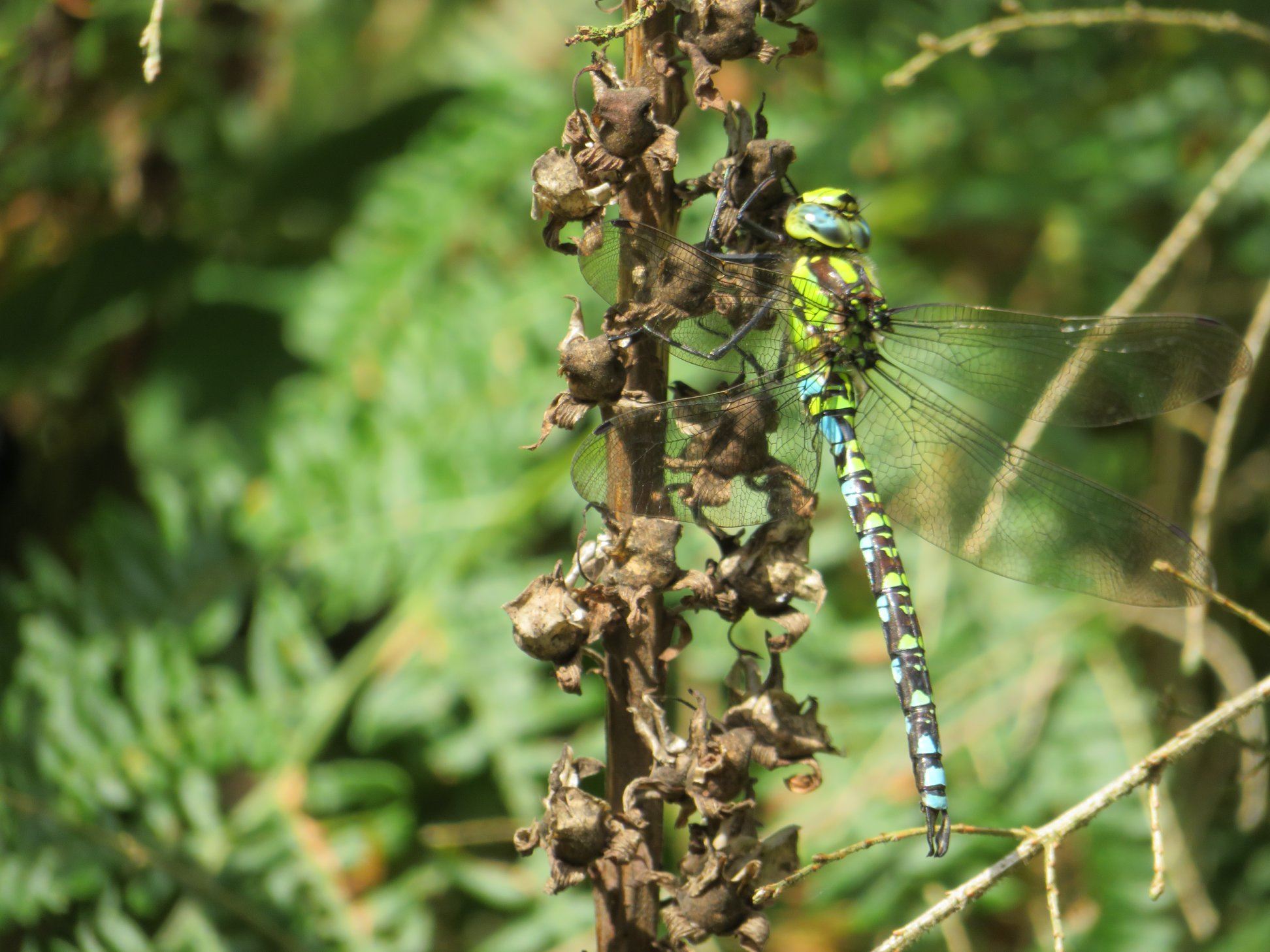