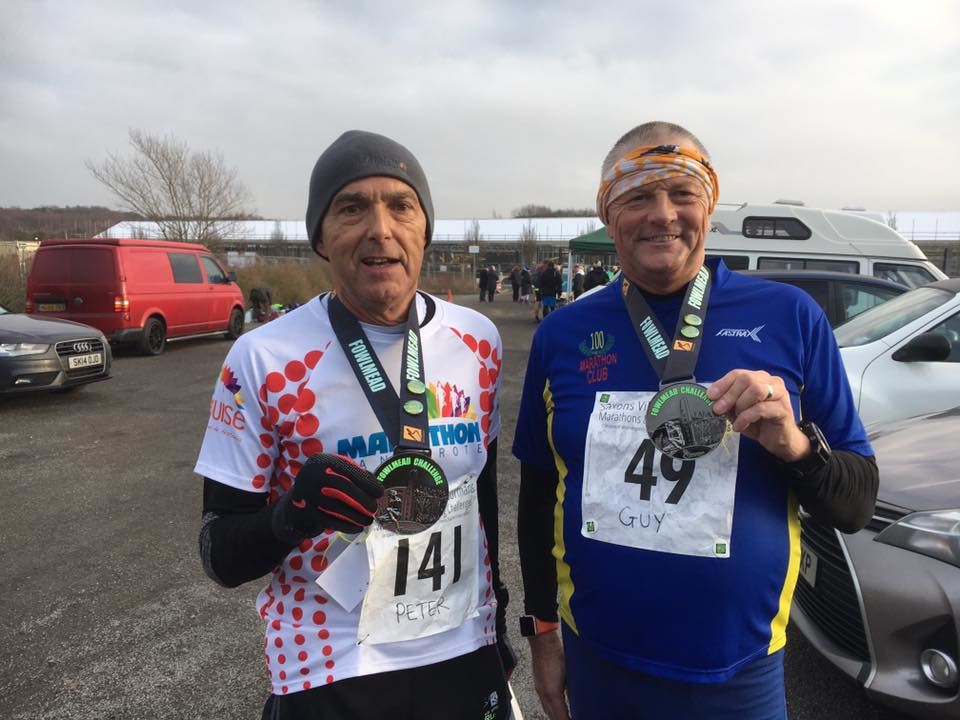 Just a Couple of Marathons

While New Year's Eve is normally getting ready for a few drops of Red and a lie in the next morning Pete, Paul , Jane and I went to Kent and a lovely windy wet area called Dover for a marathon and then one on the 1st Jan just t clear the head.

The first day was trail on a wet and muddy 6 mile loop with six to do for a Marathon and three for the Half. Having been training for months Jane completed the Half and was first over the line and still waiting for her prize. 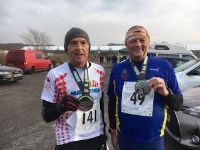 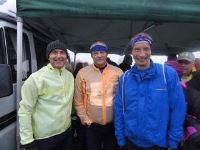 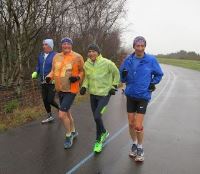 The second day was a Full marathon only with 12.95 laps round a cycle track although on tarmac and easier going the wind and rain did not help. The Aid station was there every lap with Jane supporting us from the Cafe.

Well 2016 is almost at an end so it's now time to think about your running challenge for 2017. The link here is a file incorporating the YTRRC Club Championship rules with a list of all the Championship races for 2017 (on the last page). The races with (SS) after are Somerset Series races. It would good to get a record number of YTRRC taking part in this - you only need to run 8 races out of the possible 19 to qualify (look at www.somersetseries.co.uk for all 19 as a few aren't included in YTRRC's club championships. Another challenge this year would be get some team prizes in some of the races - we have a lot of speedy runners now (you know who you are), so why not get together and choose a race a month to try for a team prize. I will try to find out which races give team prizes and compile a list. Wishing everyone a Happy New Year and a healthy and prosperous 2017.

The 1st Jan saw the Chard Flyer and this is Matt's Report:

Stomachs full of sausage rolls and profiteroles, a “pronation” of YTRRC runners (more collective nouns available) turned out for the Chard Flyer 10K. By no means a flat course, it starts after a stroll to the bottom of the town. After which, the pace picks up as the old railway line is followed alongside the reservoir. The gradient changes for an uphill section for over a mile! The drinks station at the top is little solace before a knee shattering descent and into the reserve grounds of the reservoir once again. Back into Chard we have a pleasant weaving section through the depths of the housing estate before the final hill and then 200 metre sprint to the finish and free water bottles! Yippee!
Orlando Brooke took the honours claiming overall third place while Bryn Phillips hauled home his stuffy nose to claim overall sixth. Without a team prize Tim Howes creditable 39th beat Matt Driver by over a minute. Nikki Guiver was first YTRRC girl and also had an age prize while fending off the charging Kevin Doherty.

Feeling dodgy before the race is no excuse and J-P Humpreys overcame aches and pains to beat Rob Adams and Kirsty Norman(now running for a decent club – YTRRC). Having not run since last year (Ha ha – his joke not mine) Brian Mountjoy-Row pipped Jo Henley who had a personal best of not running a race for 3 hours or so.
The ever-young Lesley Nesbitt is still on the youth elixir, again winning her age group while Linda Membury’s new hops diet got her home easily inside the hour. Alan Smith was a painful minute the wrong side of the hour, but will be using that as motivation for the next event. Between bouts of Prosecco Francis Swatridge stode in ahead of Sarah Hyett, with Adam Hawkins the rose between the thorns triumphing against Kimberly Weston. Katie Brooks and Deborah Keeble enjoyed the event so much they took their time beating last place by around half an hour!

Congrats to Nick and Flora Brooke competing for Dorset Doddlers.

The Results can be found here.

THE ROSE AND CROWN

Tonight we ran with Phil from the Rose and Crown at Bower Hinton. My first run for a week due to a grotty cold. We ran up the main street to Martock and out to Coat and into the darkness. Care was needed due to it being slippery underfoot. With the darkness and cold came smells of silage and muck, and we ran past the bridge and out to East Lambrook. A left turn got us heading towards South Petherton. At Atkins Gate we turned left and headed back. High up on a stone wall past the Parrett works was a well lit up Christmas tree with all the primary colours. We continued in the cold dark towards the orange glow of Martock and the pub. A nice run of 6.5 miles to try and clear the cold and overcome some of the excess.

Tonight we went off-road and ran down a narrow muddy path lined with fallen leaves. The head torches kept the group out of the hedges. The other five and a half miles of Brian's run were along country lanes to the south west of Yeovil. We went past Tellis Cross, Coker Court, Beryl Knapp, Holywell, and Inglemount, and came back via the Yeovil streets between the A30 and A37. The last leg being a straight run down the A37 back to the busy pub. The roads seemed a bit slippery in places, probably because of the damp. The sky was clear and starry. Orion was up there along with the others. A nice pub run just before Christmas.

The Chairman completed the Percy Pud in Sheffield on the 4th Dec and sent in this report:

After battling against the tail end of Storm Desmond last year, this year was sunny, with no wind and a temperature of 5 degrees. It was a great race with both the male and female course records being broken and the first male finishing in under 30 minutes which was a first for this course. I had a good run, initially tucking in behind two Christmas Puddings who were doing a steady eight minute mile pace and then, feeling good, pressed on past a banana and finished in the fastest time that I have done since 2012.  Not only was every finisher rewarded with a Christmas pudding but we we also got a sachet of custard this year!