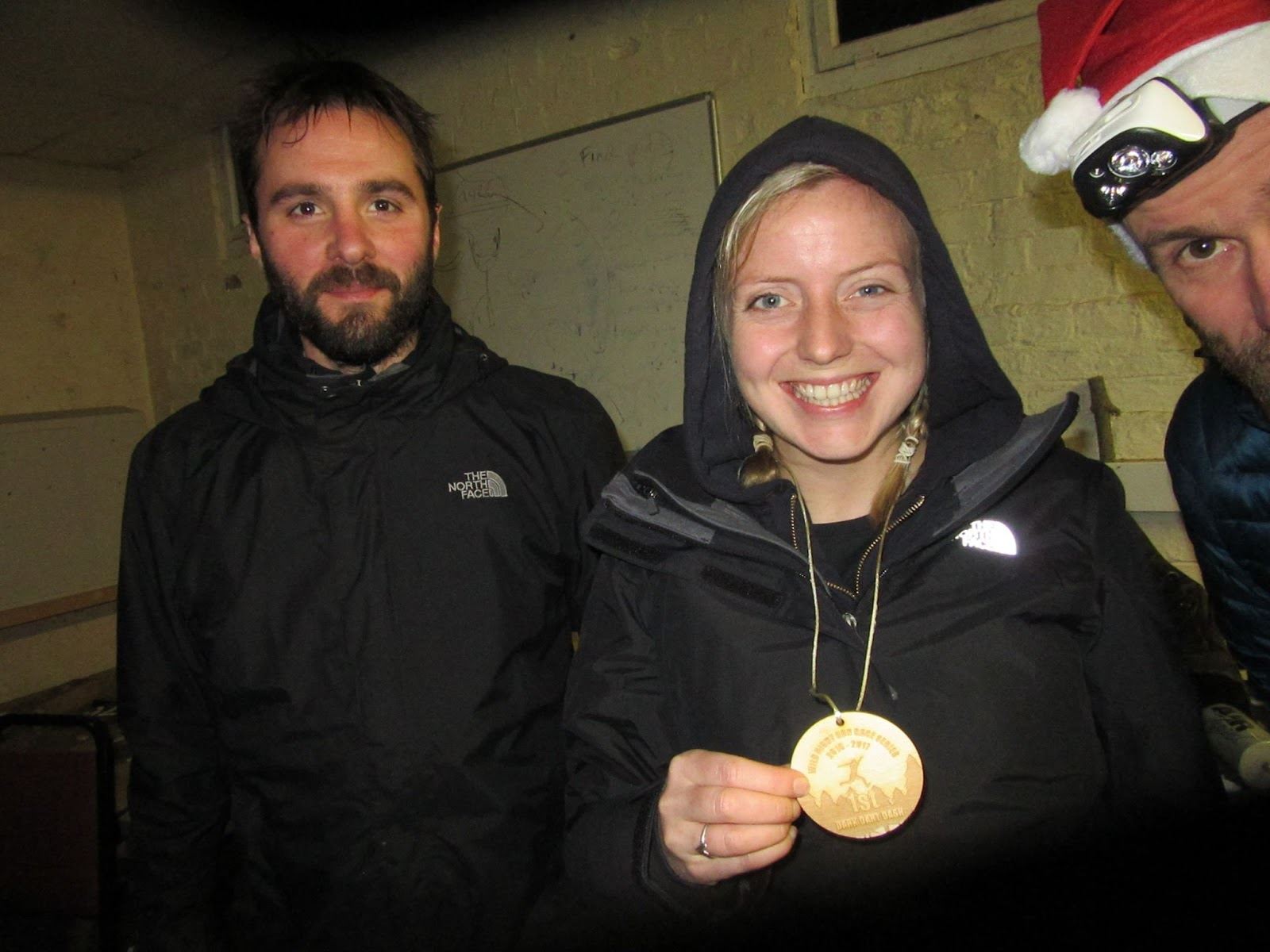 This weekend saw Paul and I had down to Dover for a Double Marathon at Samphire Hoe, the Park is the waste from the Channel Tunnel and just happens to be a 3.75 mile loop so ideal for a Marathon.

It was my first time running in Dover it the Sun with no rain or wind. The medals were massive and has your name on it. This was a challenge event so if you wanted you could have done one lap to get the medal, but 7 was better.

Ben Smith, 34, of Portishead, Bristol, battled back from injury to pass his fundraising target of £250,000.

The award, for achievement in the face of adversity, is in memory of the BBC presenter who died of cancer in 1999.

Smith ran more than 10,000 miles despite a serious back injury that required intensive physiotherapy.

He began his charity attempt on 1 September 2015 and ran 284 consecutive marathons in 284 days.

A hernia and back injury in June forced him to stop for 10 days to recover before resuming and making up the lost mileage.

Having suffered bullying as a child, Smith wanted to raise awareness of the damage caused and to support his chosen charities, Kidscape and Stonewall.

Thousands of people backed him along the way and he was cheered through the finishing line by hundreds of supporters.

Nine, nine was the number of the valiant and the brave. The brave runners who took up the challenge of the ancient college of Dartington. Who stepped forward to represent Yeovil and Somerset against the Devon hordes. They did not care if they were fastish runners or less so, whether they could win or not, they would face the challenge and give their best, while hoping that would be enough, to see them safely home to the finish line.

The journey was attritional. Not one to brave without adequate substance. Upon arrival we were informed the host that was gathering was indeed massive. We took our motor carriages to parking off site and trekked back to the college.

The one minute warning.

After the up came the down. A treacherous descent where the normal steps were changed in mud flow, mud oozing down them. Our brave racers steadied themselves and escaped with their shorts cleans. Onto towards the riverside plantation and past the 5k split. Dodging between the trees dunking under the branches straining for every advantage looking the shortest route or the firmest footing as they ran along the river. A step here, a plank across a ford there, they encountered it all as they made their way out of the woods and it a great grass meadow.

In happy times the meadow would be a blessing. That night the ground soft and energy sapping. Slowing our runners as a chill mist engulfed them. Chasing the lights in front of them. Striving to find a dry line across those fields. This boggy meadow was the last flat significant flat ground of the night till the home straight. Having done the course before they all knew what was awaiting them. All they could do was grit their teeth and steel their resolve for the test ahead.

A few quick steps up and they were onto a short concrete dash. Those that had the energy enjoyed it briefly using the firm footing to advance on those in front who were suffering. But all too soon they saw the marshal ahead. Calling them back off the steps and pointing upwards. The first test was a steep flight of steps they conquered that. A short false flat and the climb was on again. It was steep, so very steep, only the best, the brave and the foolish could hope to take it speed. Many walked to conserve energy. This time it seemed shorter, gathering what energy they could they took the corner to find themselves confronted by yet more hill, what treachery was this!? They thought they had just conquered the night’s stiffest challenge but now they had more to do….
Climbing again they battled onwards, struggling to pick up the pace as their tired legs topped the hill. The next km was more down than up. Sweet relief for the legs but a bitter pill for the brain. For the runners knew they’d have to gain that height again. Through field and track went on. If they fell, they picked themselves and tried all the harder.

The next steady climb began in a field, the lights in front slowed and the gradient increased and they climbed to the highest point of the night. Topping out a marshal directed them into the college’s hallowed grounds. Running through its central avenue those that still had life in their legs tried to pick up the pace before turning towards a farm and onto areas with more treacherous footing. Back along the far side of the plantation and heading into those muddy woods in which their ordeal began. Somewhere in here our ten k runners picked up the 5k route. Their headlights bounced of their clothing. Those that could spare the breath tried to utter words of encouragement to the back markers from the 5k. Many of which in turn cheered those racing the 10k on. Mutual respect for anyone who would take on this challenge no matter their ability or the course they chose. All were testing themselves and courageously pushing their limits.

The climbing began, steady at first but soon many were slowed to walking pace as the gradient suddenly ramped up. Conquering that steep slope in the woods our racers tried to run on. Up the hill. They trudged through the slippery mud. Those that had been there before knew they had to pass those ahead before the end of the hill. For all too soon they’d be on the narrow concrete finishing straight. They reached the arrow off the hill and plunged a quick sharp drop down. They attacked but the footing was treacherous and they struggled for grip. This was new. Woods lay ahead. Confusing woods with no clear path. They danced through the trees, dodging this way and that searching for tape and course markings to see them safely through this final test. Brief moments of doubt engulfed them but there it was. Finally, the concrete path. Slippery in the dampness of the night they raced. Urging themselves on so as not to get picked off behind. They could see the finishing line, a tight corner to the left, a ramp and to the right and they were there. Spectators cheering them in. Water, medal. They savoured their triumph and greeted friends. It was then that the 10k runners found out the most amazing news of the night. One of their number had won the 5k for Steph was the 1st runner home.

We look forward to the challenges ahead and hope you’ll join us. Not just on the race but on the road trip down but in the pub afterwards where we break bread together (when we get there in time) and celebrate everyone’s achievements. This time we were joined by the race organisers whom we must thank for suggesting the excellent Cott in Dartington.

Ps if Matt asks you if you want to see a picture of Rob from the night just say no. 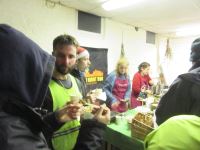 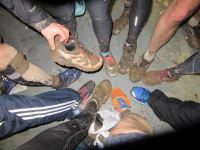 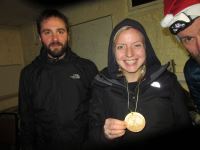 No official results spotted but three of the night runners took on a new race from Sika Adventures on Saturday. A hilly number with 550m of ascent the race started from Bicton Arena and went to Woodbury Common. Also used in the Bicton Blister. Being a first race was a small field and although there were difficulties the course was fairly well marked for a first event. The 25 person field included some strong runners. At £13 with affiliation this was a bargain of a race with 2 aid stations. A good race HQ with ample toilets and showers plus reasonably well stocked aid stations on course. Free photos, tea, mulled wine, mince pies and well stocked goody bags at the end made it a bit of a bargain.

:)
Nathan, John-Paul Humphreys and Matthew Driver all finished the half.

PS it's the RD's dog and photo before the start.

Team Yeovil for December's Street 5k.
Not a PB for me but very pleased with my consistent laps/pace

In a last ditch attempt to get sub 1:40 half marathon this year I searched the Internet for an event,

coming across Runthrough.co.uk  who organise running events in London.

400 runners with different start times for each race – all entries chip timed with mile splits recorded too.

It was cold and foggy but the organisation was great along with atmosphere, it is a long way to go but plenty to

a little crowded at times but always someone in front to catch up with ( or be lapped ).

Tonights pub run started at the Bell Inn Ash and was led by Phil. The first bit was dark involving country lanes and farmyard smells (Witcombe and Milton). There were some muddy puddles as well. We crossed over at Stapleton Cross and ran out to Coat. The Christmas lights vere getting bolder and brighter. We turned left and ran down into the centre of Martock, which was very well lit up. A low picket fence was adorned with bright coloured lights as if to attract night goblins or something else? We continued down to the public toilets and went left and headed back into the dark. The final leg up Martock Lane took us back to Ash where we finished with 5.5 miles. The high-light of the evening was the art-deco Tea Pot served in the pub. Another good pub run.

The Club was represented by three oldies at the Wellington Monument 10k today, myself, Richard and Adam. The sun was shining with atmospheric low mist over the fields. It's a tough race climbing up from Hemyock to the monument running around it and back down to Hemyock with a sting in the tail running uphill thru the village to the finish. We were then rewarded with mulled wine, mince pie and a bottle of Sheppy's cider to take home. Well done to both Richard and Adam who improved on their last year's time and I managed to get 1st FV65 (probably the only one!) Results not out yet. 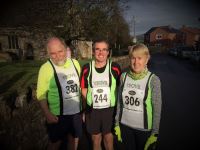 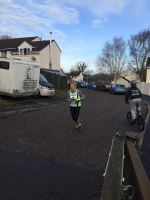