Half Time in Valencia 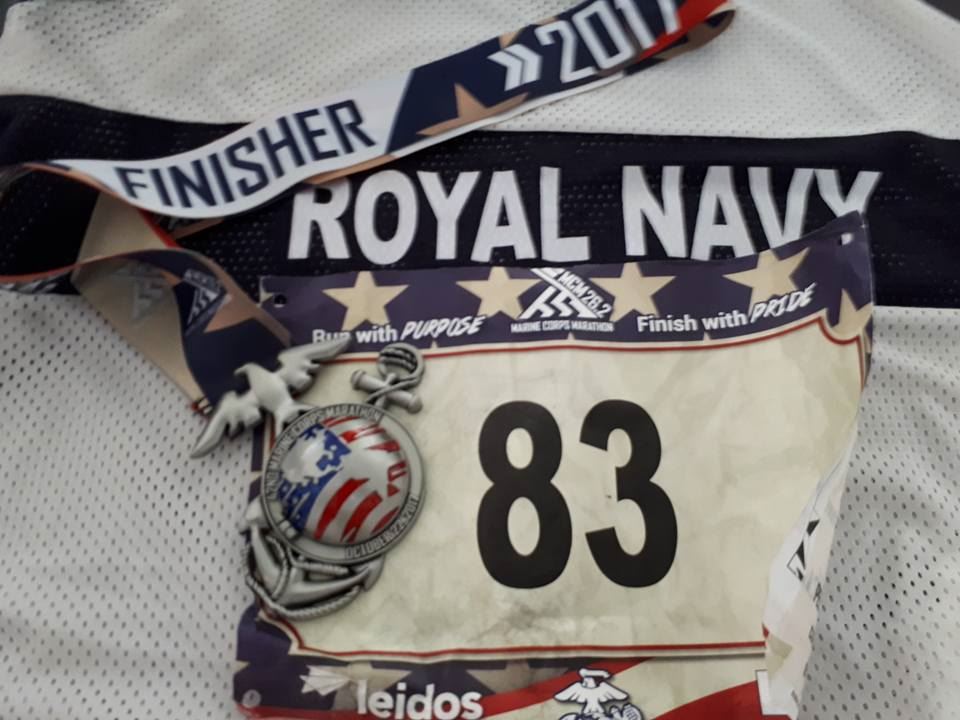 This weeks pub run is at the Haymaker and the pub would like to know numbers so please can you let either me or Simon Rowbottom if you are? Thanks

If you want to come then complete the entry form and get your food order in, time is running out.

From Catherine: Anyone wanting to be in the VLM ballot please make sure a committee member is shown your rejection. Posting it on Facebook does not count as there is no guarantee it will be seen. I am happy to have them either by PM or email but I won't be trawling the group to pick them up.

YTRRC had a few Runners in Portsmouth today for a windy Great South Run, Jo Henley and Liz Diamond were two of them along with Carl Chappelle-hedges Michael Bird and Claire Shucksmith. Well done all, not as windy as Thursday's Pub run...... 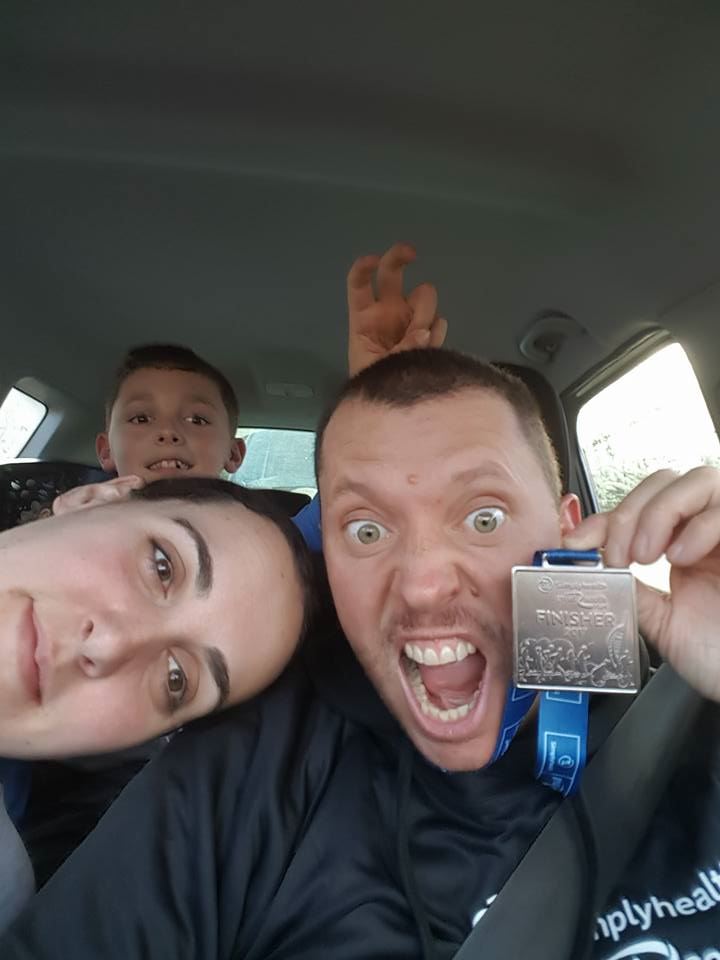 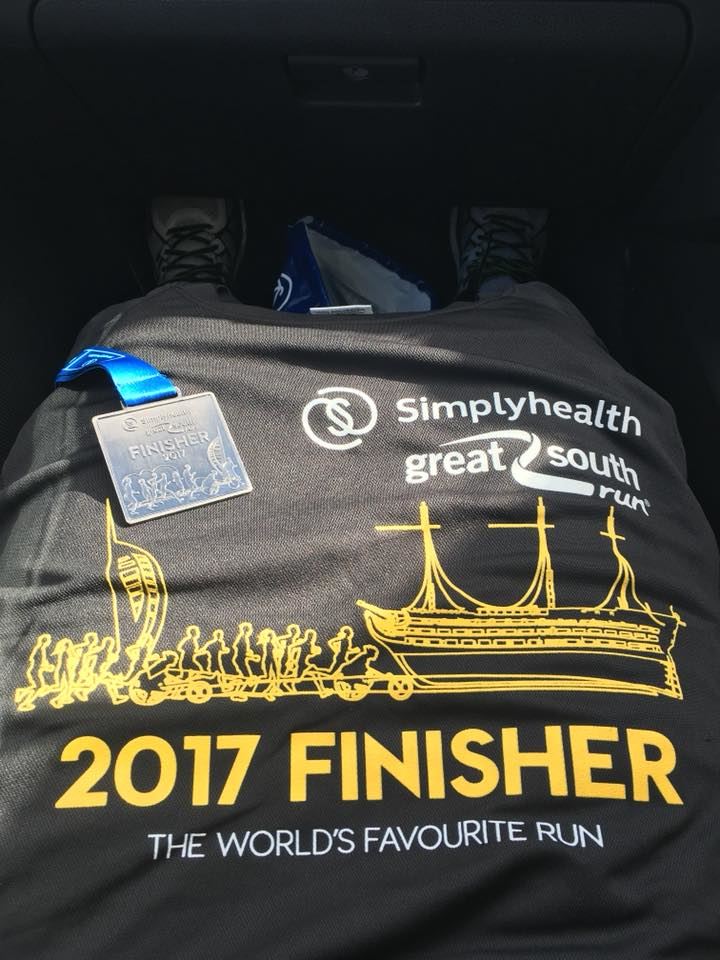 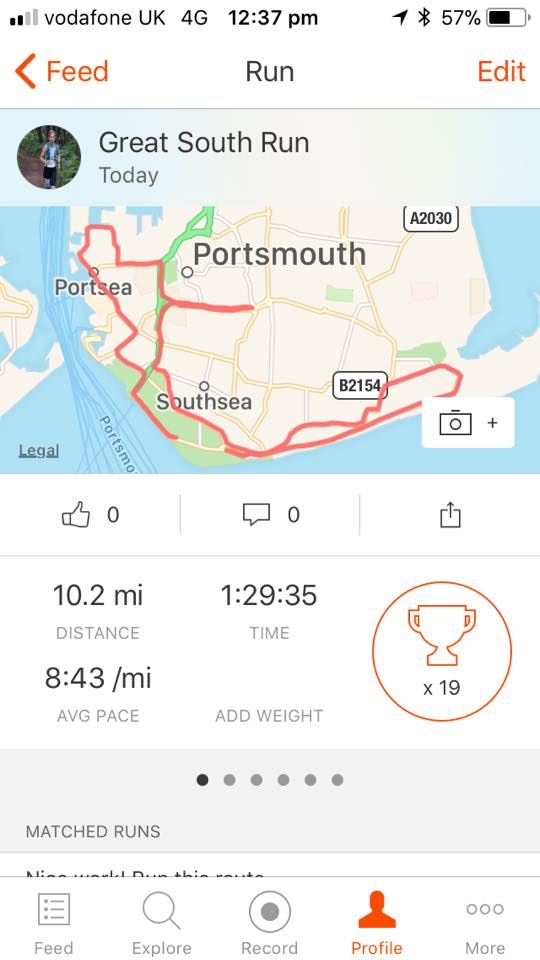 Bryn was over the pond this weekend running the MCM and managed to get a pb with a time of 2:49. Well done mate excellent running. 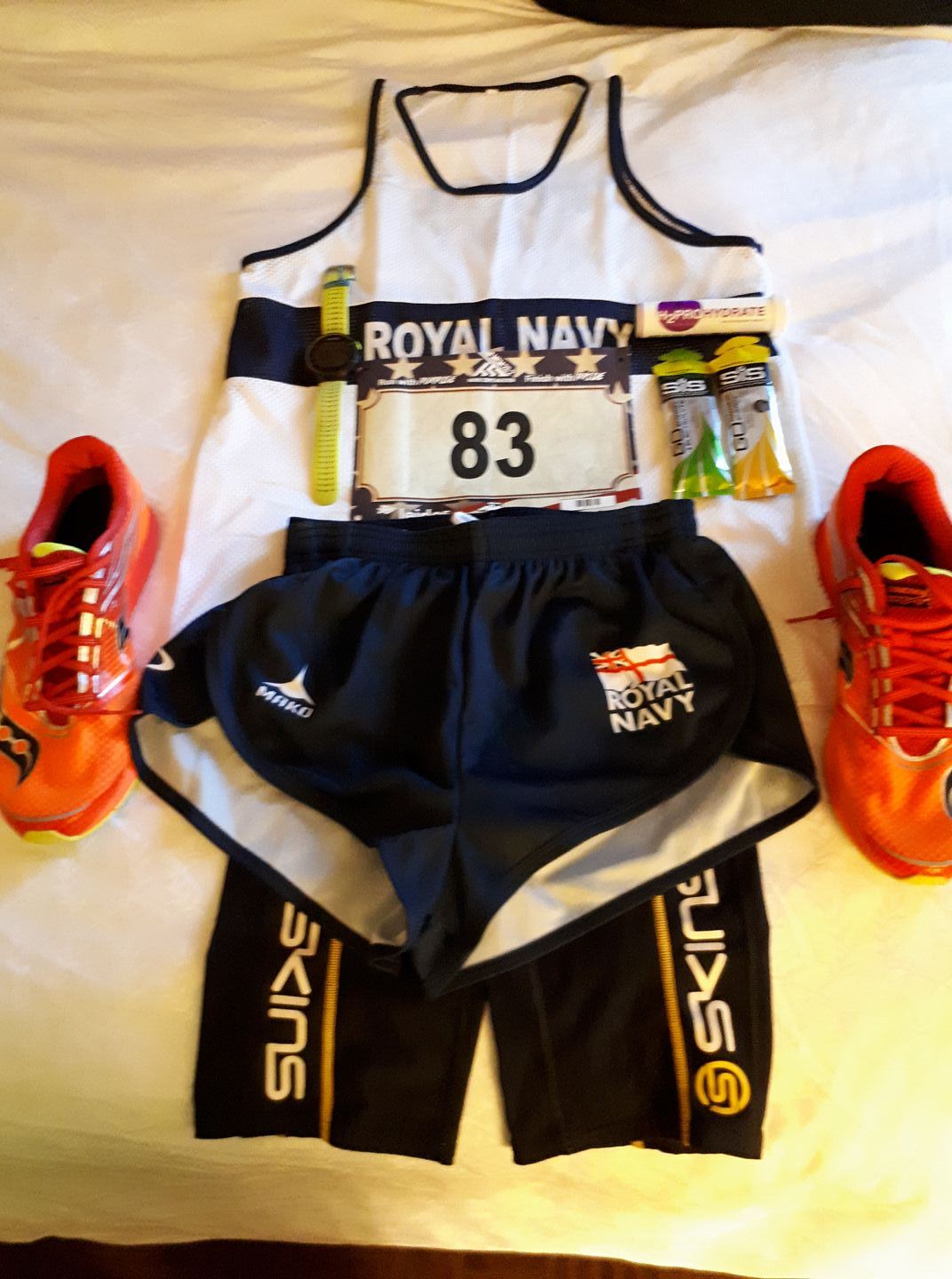 From Lynne:  Chelmsford marathon today, cold bracing wind, straight from Russia, blowing across the Essex countryside. Half an hour slower than yesterday, but not surprised. The marshals were brilliant, scenic route. Small medal, but all the money raised going to young people's hospice. And when you get a message like that on your banana, makes it all worth it.!!!!!!

today, cold bracing wind, straight from Russia, blowing across the Essex countryside. Half an hour slower than yesterday, but not surprised. The marshals were brilliant, scenic route. Small medal, but all the money raised going to young people's hospice. And when you get a message like that on your banana, makes it all worth it.!!!!!! 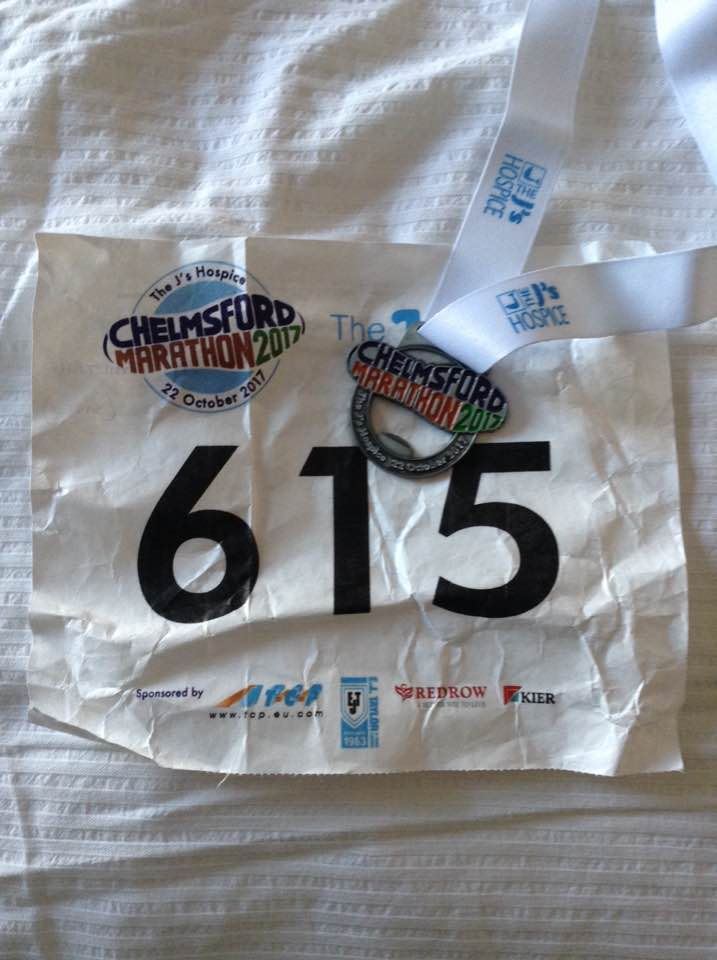 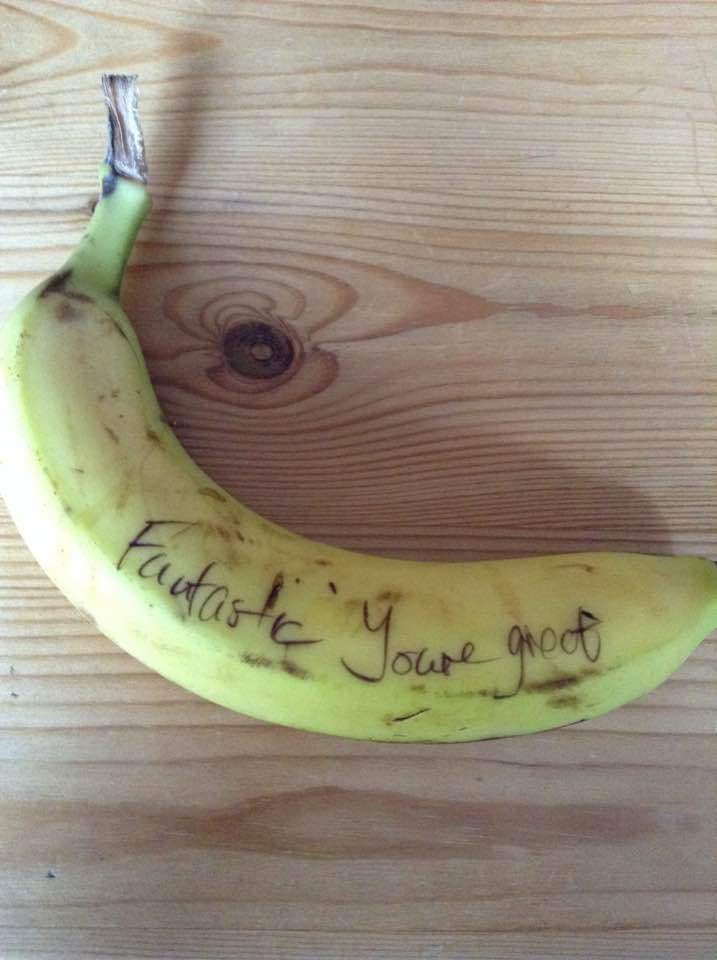 From Matt:  Exmoor Stagger...well blow me, that's a tough race! Got to bed at 00:10 this morning after helping at Nathan Gardiner's brilliant night race, so the alarm at 6:30 was painful. Storm Brian was still hanging around, but the sun was out for the start so we we shot off up a three mile hill. Richard Dodge was playing it cool having raced last night, whereas Mac (sorry, no surname known) was taking his Brother-in-law (Phil) round after a drunken bet (disgraceful). Three miles in and I was done in. Walking at this point doesn't help when the race has a cutoff for a shorter event. Sticking to our guns we left base camp and pushed on for the summit! Dunkery Beacon threw everything at us, torrential rain, high winds, and I'm sure I saw an iceberg sail by! I was delerious from a lack of oxygen at this height but recovered with a breakfast of two bananas and fourteen jelly babies. Mac had passed me, but waited a moment for Phil to catch up, so I took my opportunity to escape. Miles of painful up (including a "stupid" hill - it was a grassy cliff), and then painful down (who knew, downhill hurts too). At last, the most anti-climactic finish line and we're done - or done in! Times don't really matter, so we'll leave it there. I was first YTRRC, Mac second and Rich is probably still on the moor pottering round with some lady he's met on the course! Love and kisses, Matt - for you Bungy Williams (the report, not the kisses) 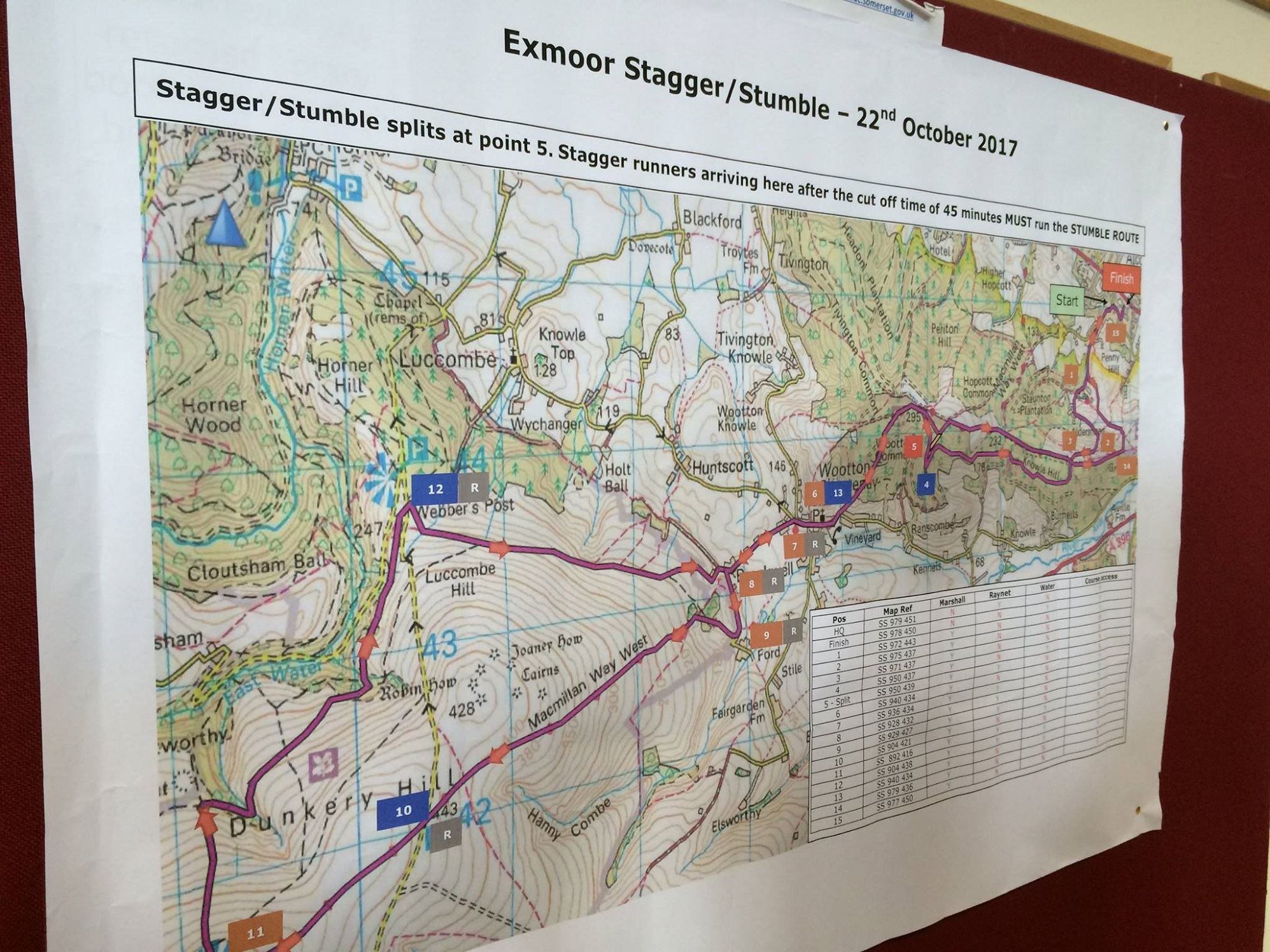 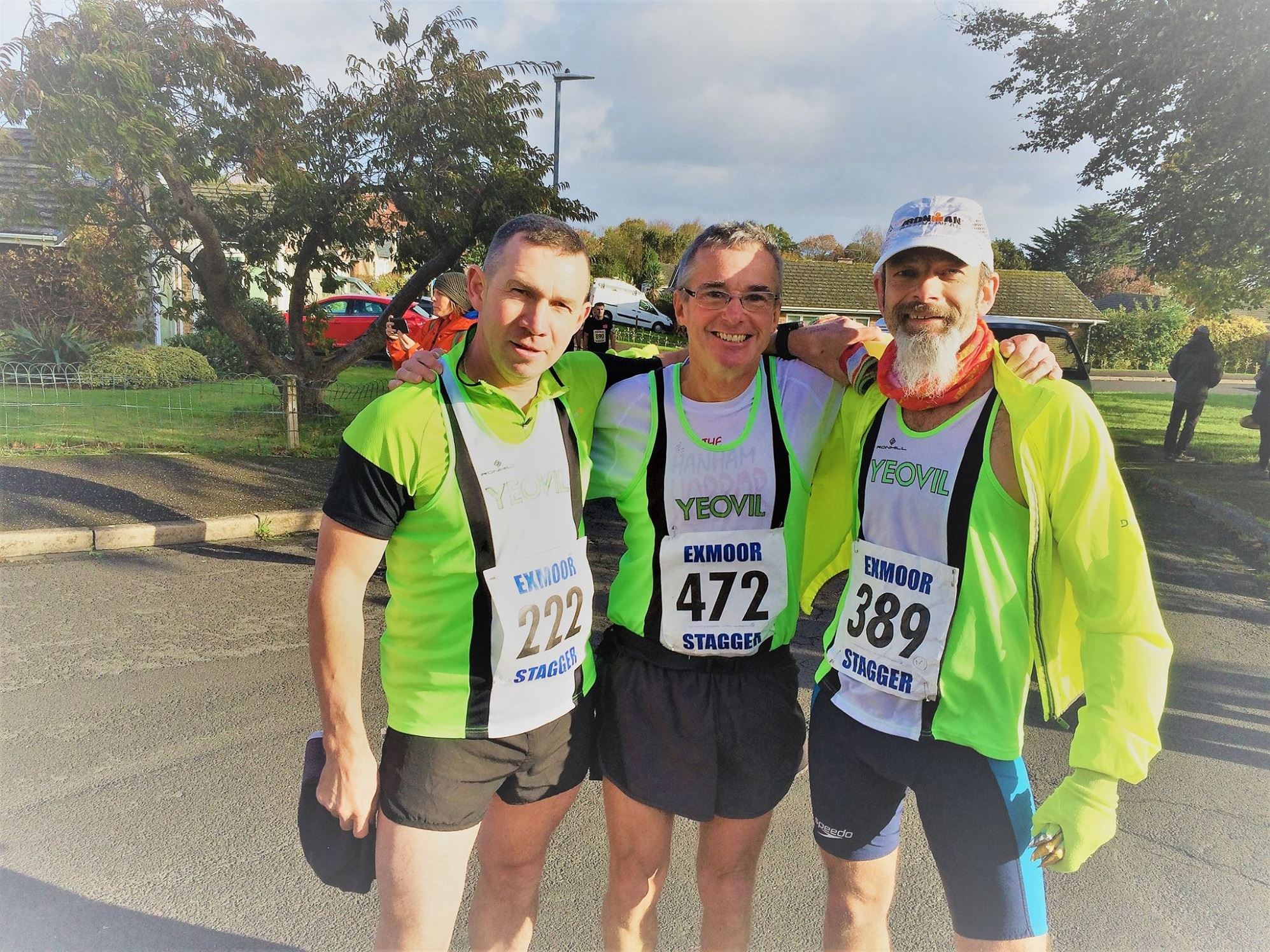 From Kev: Valencia Half Marathon completed.
This is one of Spains most prestigious Half Marathon courses and had entries of approx 14,000 runners.
I had Orange bib (1:35 to 1:45) and decided I would stay middle of pen .. not get dragged along above goal pace ( 4:30 per km target) as often I do!!. Problem was it was a slow first 2 Km ( 5 min per km) so I was down on target... then I realised it was actually quite warm ..
Very warm actually .. plenty of fluid taken at each water station .. from 2km - about 10km I was back 4.30 -4:40 per km and 47 mins at 10km. A beautiful course ( noticed on some mid week section runs) and it is very flat indeed. Massive crowds and support through city centre .. load music played along course... bit disconcerting to hear Benny Hill theme blasting out ( those old enough will know it)
I'm not sure if coming out to a big race too many days ahead was a good idea ( if chasing a time!) As we walked a fair bit and I eat too much..so I have to confess was disappointed with 1:41:05 afterwards .. but on reflection I think I've gained some more experience and certainly a decent training effect .. fantastic Medal which was engraved at end very swift operation with lazer machine. 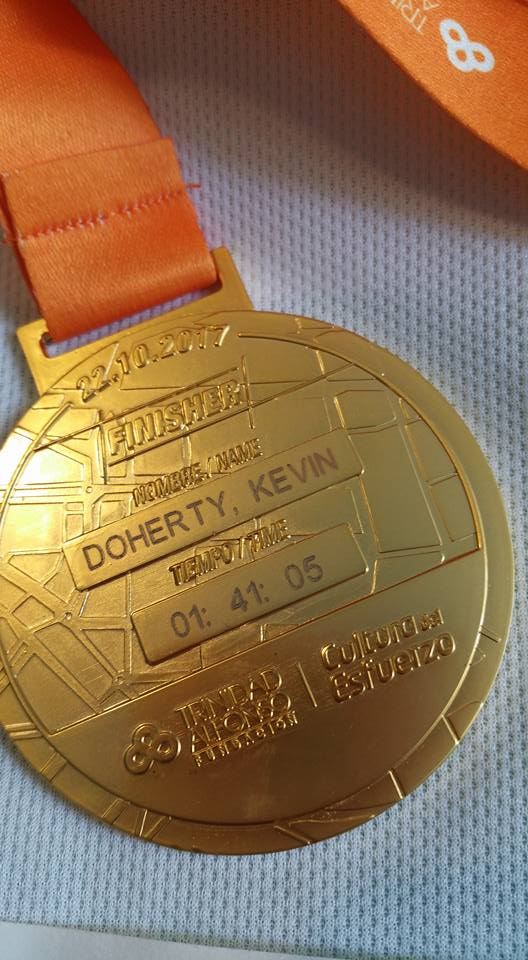 PUB RUN – YEOVIL PEN MILL (19th October 2017)
Tonight’s Pub Run from the Pen Mill was led by Helen. We gathered under a tree in the car park to shelter from the light rain. There was also a cool breeze. The main group set off down the road and turned right into Yeovil Country Park. We made our way along the wet and muddy track, past the cinema, and out to Nine Springs and Goldenstones. The rain did not stop. We continued to the end of Lysander Road and ran up Bunford Lane (Hi...ll). One minute warm, then cold again as the rain got heavier. We crossed over at the top and ran down to Nash. At this point the rain was heavy, lit up by my head torch, and my vision was limited by cloudy glasses. The wind was cool as well. We continued down to the East Coker road, then turned left to run back up into Yeovil. A third turning on the right took us to Hendford Hill, which we ran down. Then going back the way we came, we ran through Goldenstones, Nine Springs, and the Country Park again. By this time the puddles were much deeper. It’s not often we have such a wet Pub Run, but it was as enjoyable as ever. Thanks Helen and all. It was good to get into the dry hotel to eat afterwards.