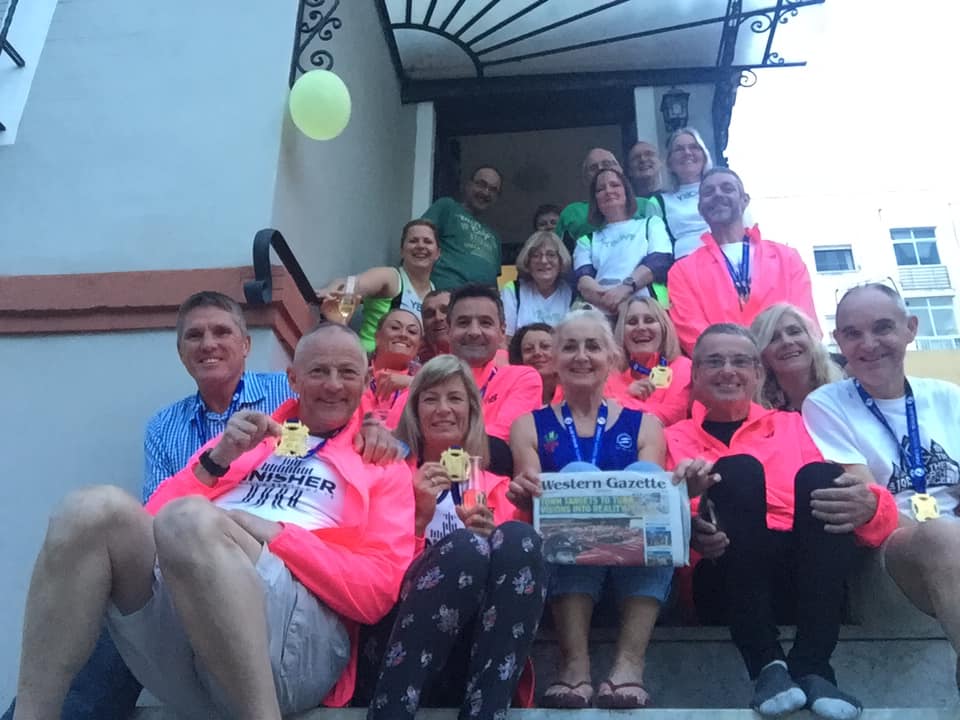 So as I was the only YTRRC runner at Hillingdon Half today, i think its only right to create a little write up for the blog!

A trip to see some family in west London this weekend, I couldn't resist to squeeze in a flat & potentially fast half marathon. Nice route well marshaled with plenty of fluid stations. Nice hot day for it too.

I had no idea what sort of time I was expecting as this is my first race since Weymouth 10. Fair to say i went out the blocks too fast but I was happy coming home in 1.48.49, a time I will definitely be working on to improve. Suppose I can also say I was 1st YTRRC runner across line....that never happens!😂 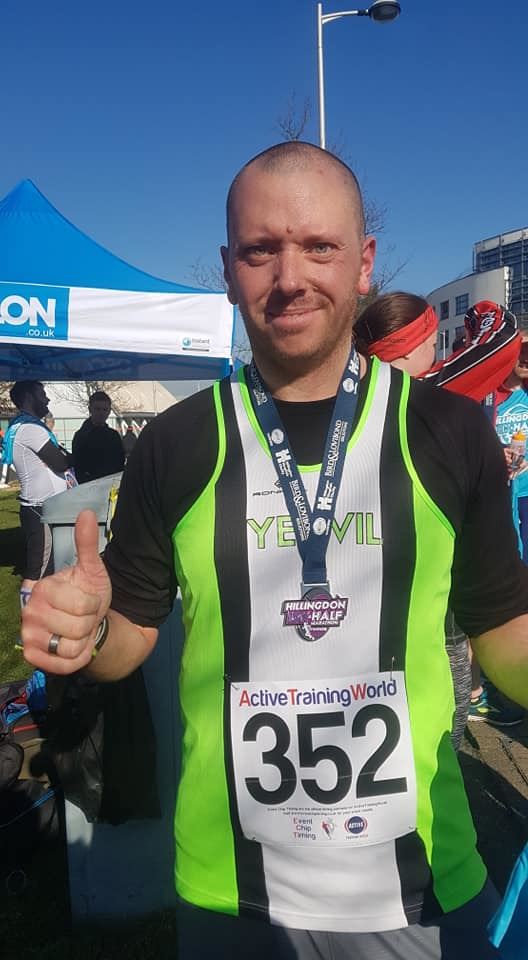 From Graham: I need to place an order for these T shirts after club night Tuesday. This order will take 10-14 days to complete, so if anyone else would like one please bring your cash Tuesday.

I'll come along 15mins early Tuesday with some examples to try on, then stay 15mins after our runs..

From Kev: Brighton hosted their Annual Half Marathon with 12,000 runners and a Gorgeous day on the Sussex Coast .. Joanna & Triss let me crash at their place last night .. I had to bring treats for Millie😁.. thanks again 👍
This is a great event .. bit pricey .. but fantastic support throughout course ( especially in a vegan runners vest😁)It has a three mile out and back then goes up and around an area of parks in town then another out and back westbound until the finish.
I stupidly thought I could be close to 1:42 .. then desperate to salvage 1:45 ... but no , with legs falling off about 8 miles made for an unpleasant ending and occasional walking for 1:47:33.. bit of eating/socialising after before almost 4 hours drive home. 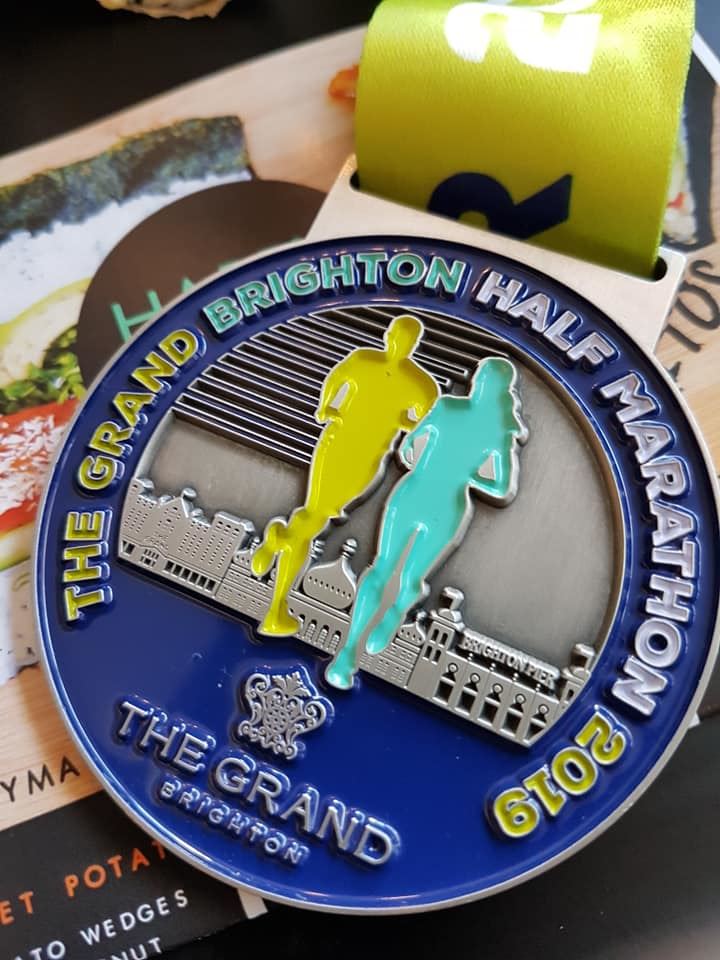 We had JC and Mike Pike, both chasing down them numbers for the big 100. 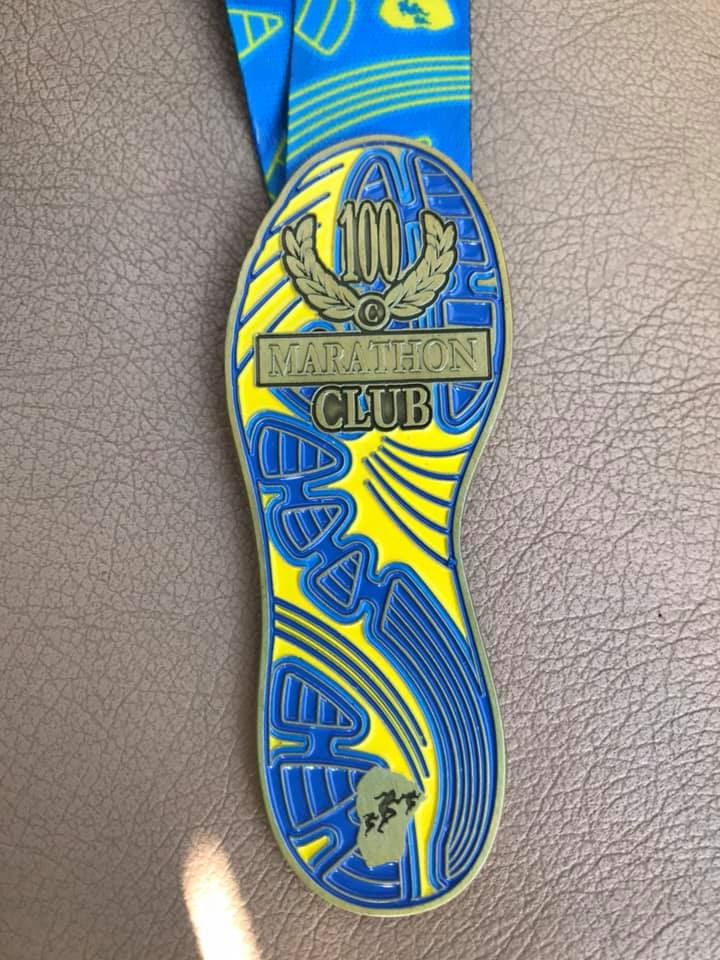 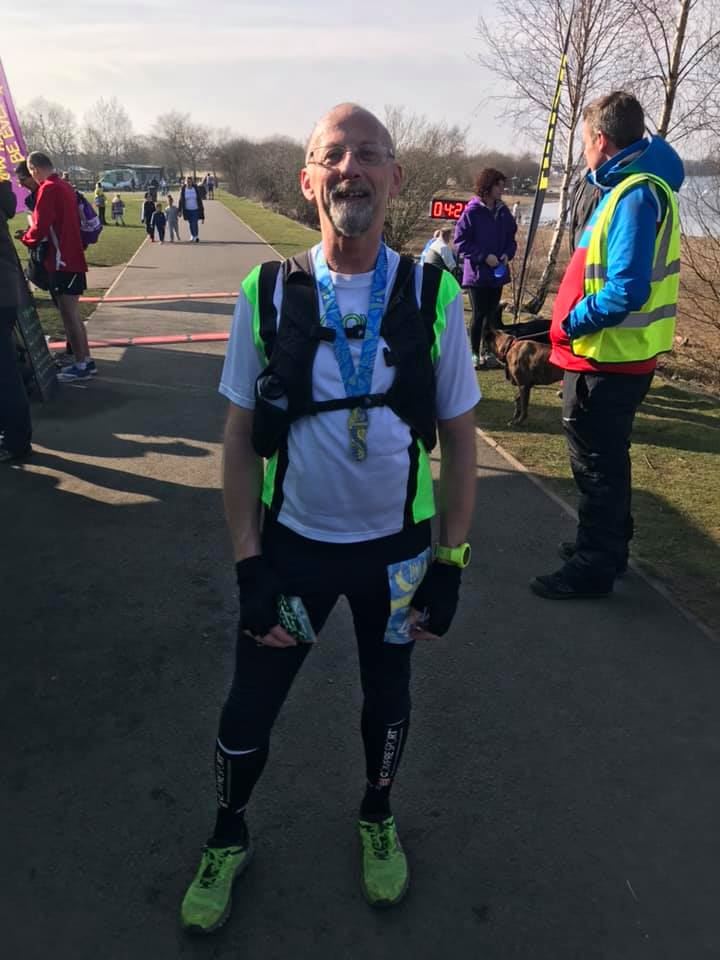 From Lesley:  A glorious Sunday morning; ideal conditions for the Babcary 7.5 mile race. A few less Yeovil runners for this championship race due to several attending Tim's marathon session but the important people were there 😃as shown in the photo. Caroline was also there but missed the photo shoot. I just managed to secure a bottle of prosecco for my age category. I think Jeff was 1st Yeovil finisher altho he thought he saw another male with a Yeovil vest. I was 1st lady for Yeovil. Well done everyone, sorry I missed a few finishers on camera. 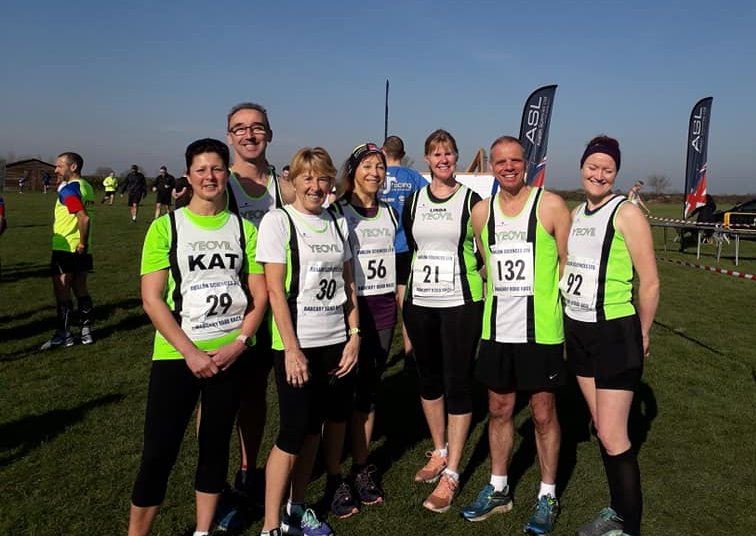 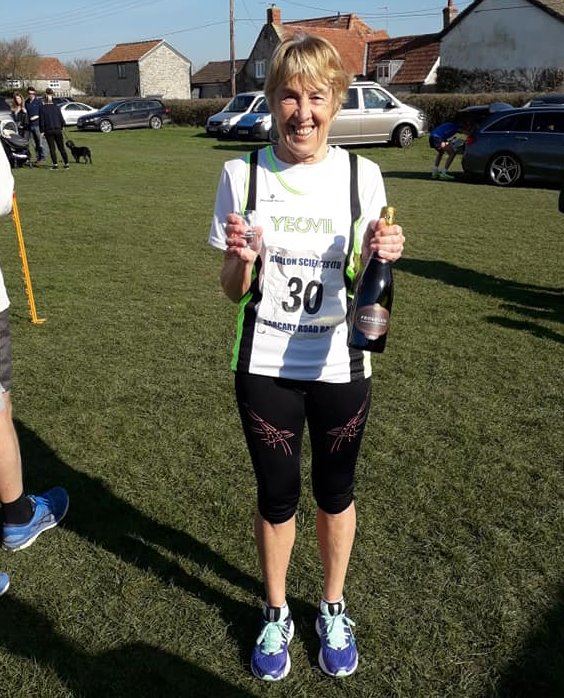 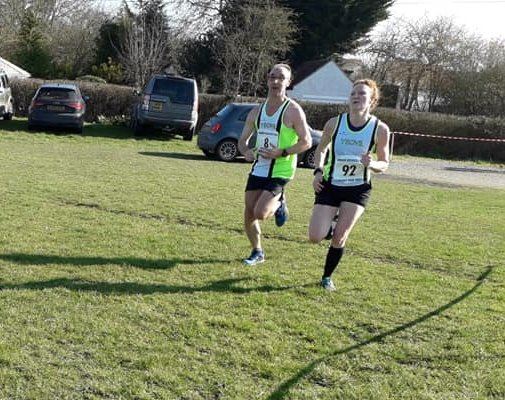 From Kev: Weymouth parkrun pacerday . Richard Dodge Luke Hicks Linda Membury and I headed down to take in the Sunshine ... it was the last run along the Prom about 450 runners I believe.
Luke and Linda ran really well and Linda almost got Weymouth parkrun PB. We met a lone stranger and took him under our wing .. we even bought him a coffee... he was very shady.. but then turns out Martin Alderman is his boss 😁 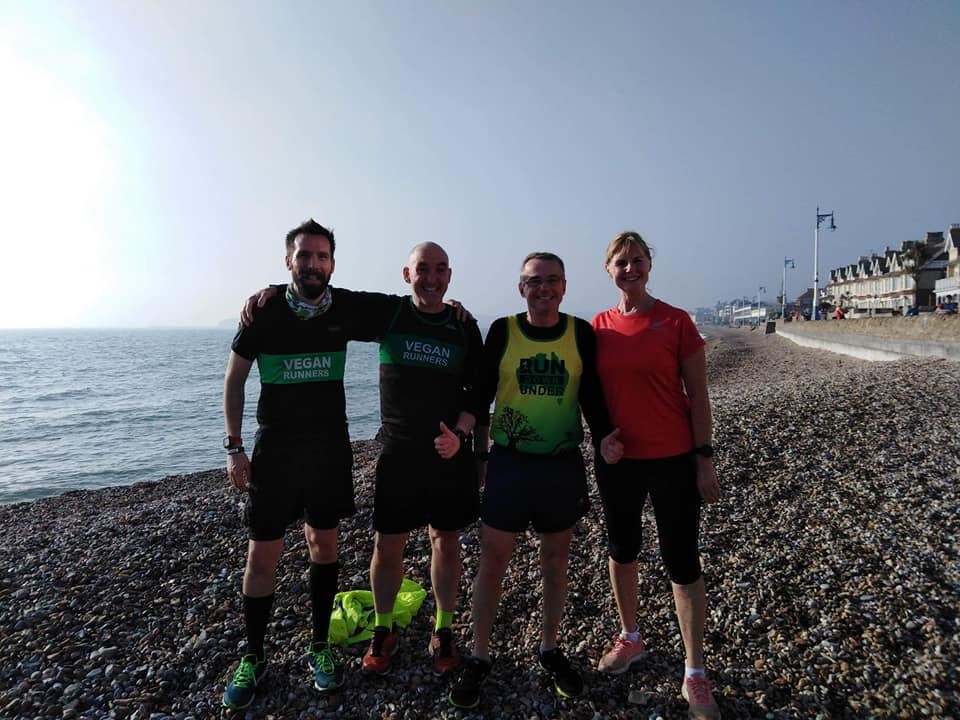 So last weekend saw about 20 Club members head for Seville for Lynne's 100th Marathon, it was about 6 months of planning and the booking of two locations a Hotel and the Villa. Of course, this meant getting to Bristol Airport and then go through Security, not hard but just remember to check your Batteries...... 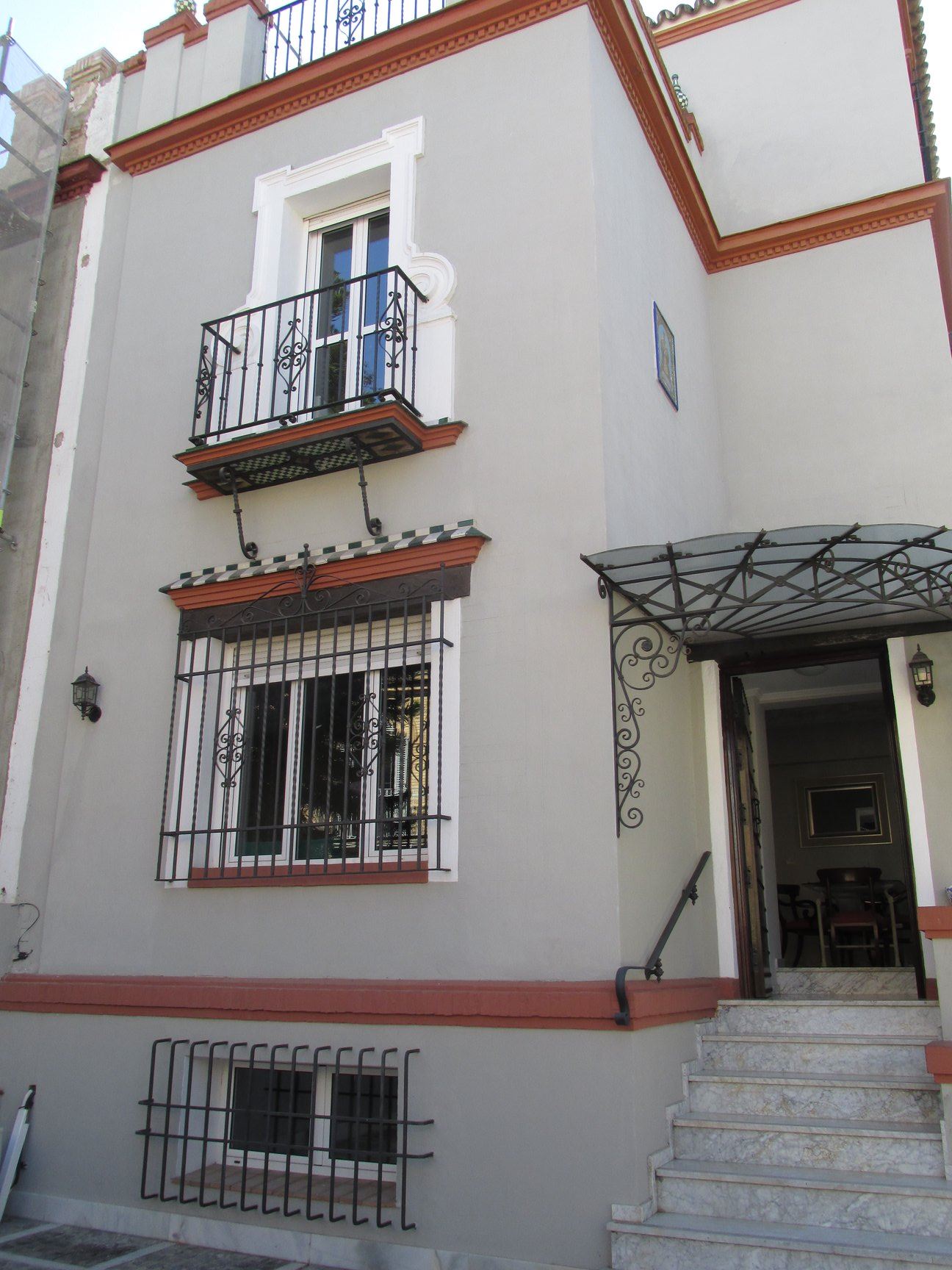 We all got to our accommodation and then for a walk to find the nearest Aid station, luckily the Villa was close to the lovely Parque de Maria Luisa, a park with some stunning buildings and also near the start and finish area. 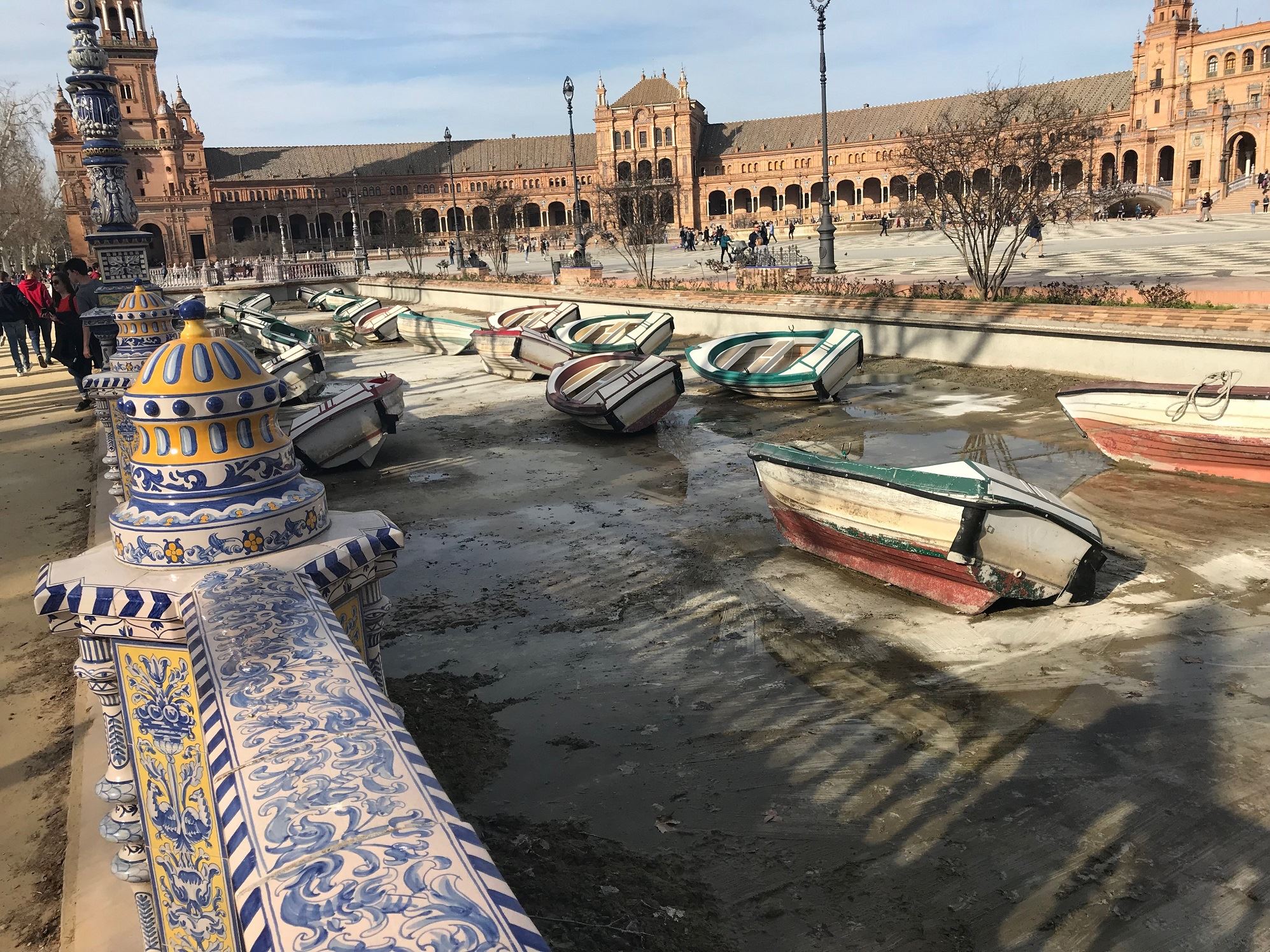 As we went through the Park we came across a large Aid Station that we stayed in for most of the afternoon. 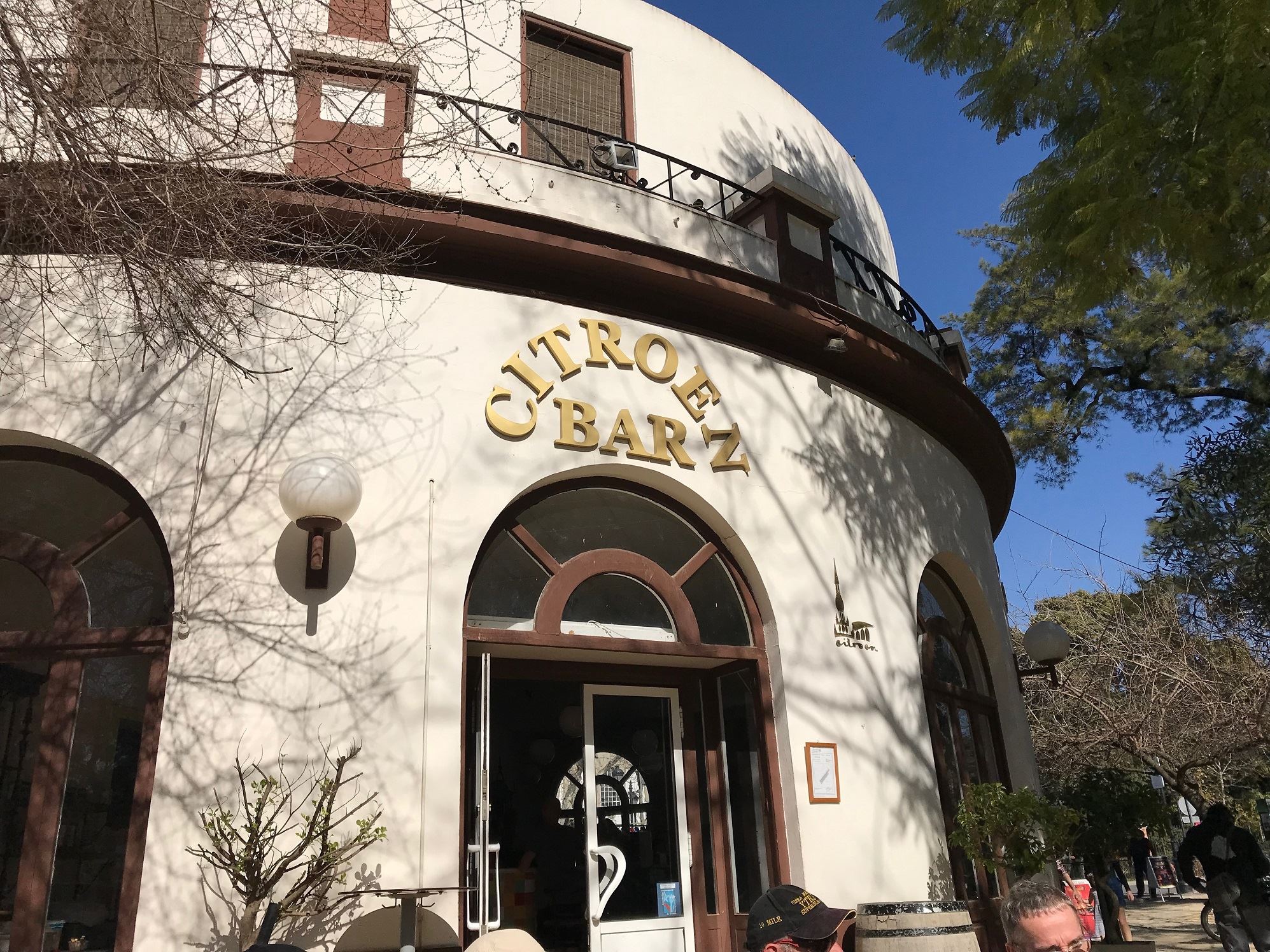 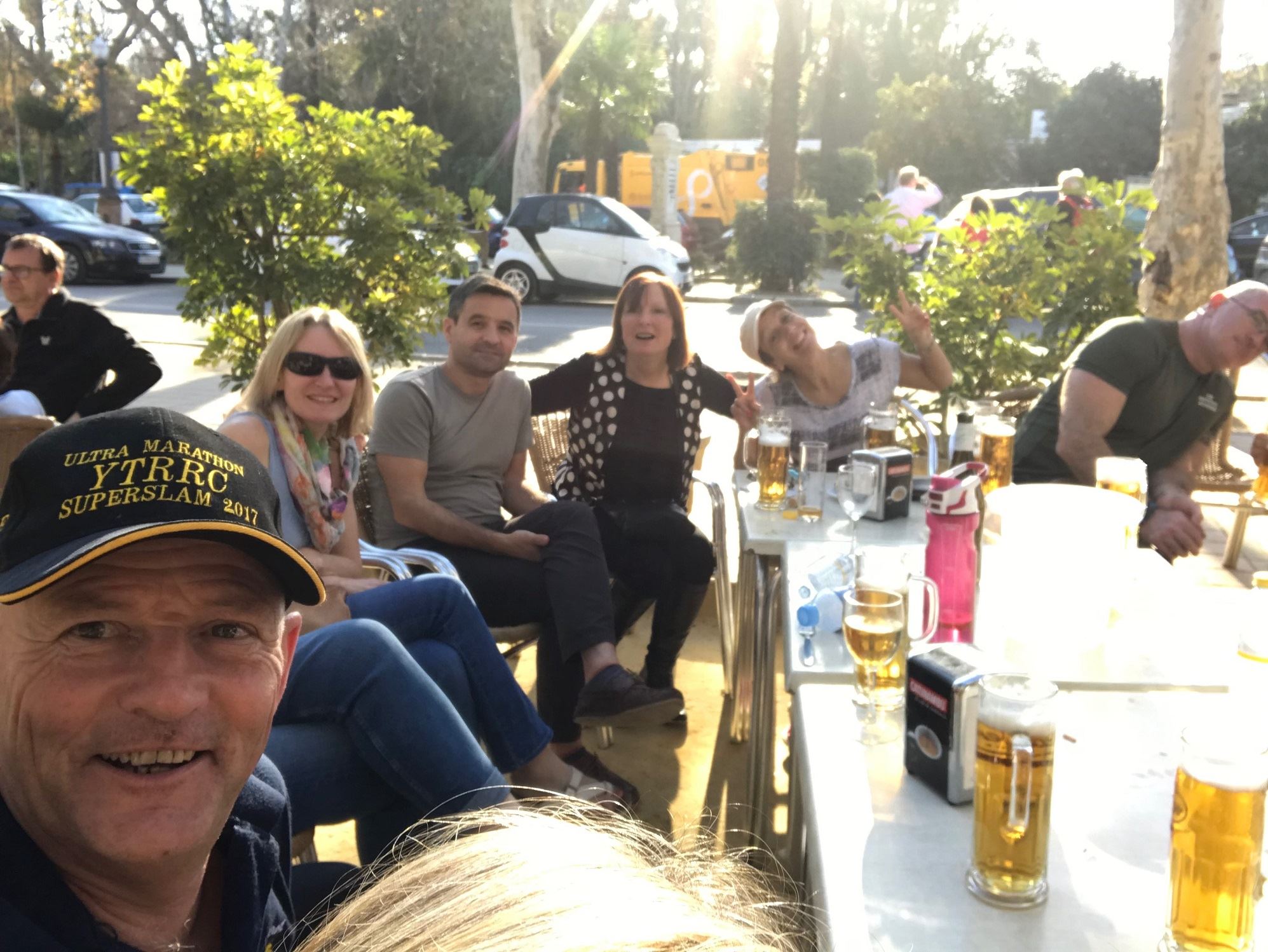 Friday saw the trip to the Expo to get numbers and our Pink Jackets, we decided to walk the 6.7k to this along a Street with Orange Trees. At the Expo we saw the Race Director of the Lanzarote Marathon so Kev and I had a phot taken with him and his Staff as they had the same T-Shirts on as us. 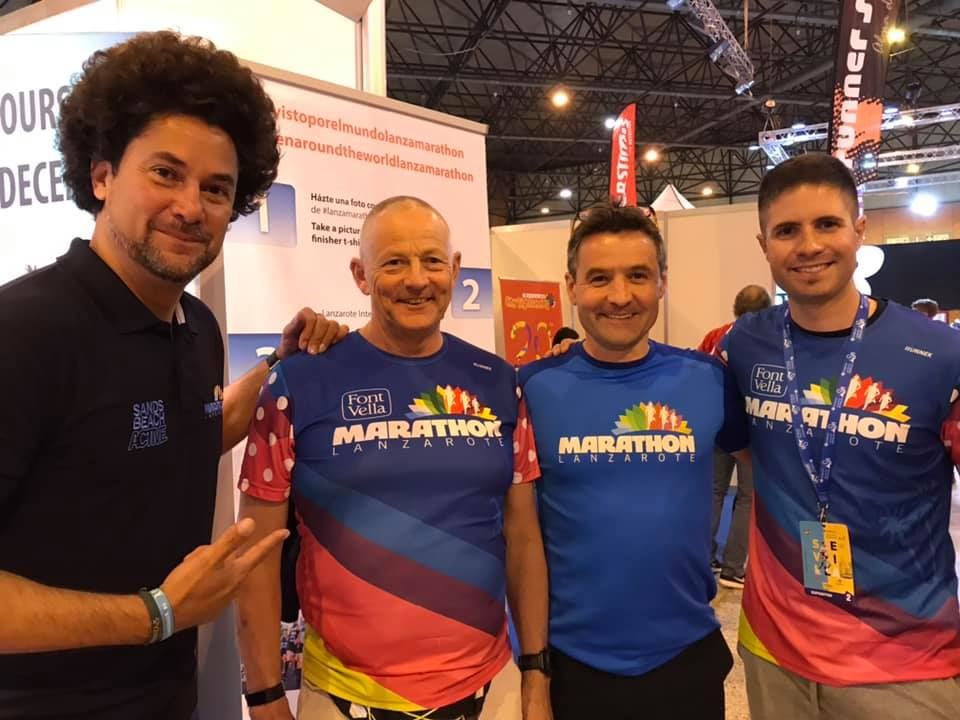 Race day came and this was Lynne's Day, with another 9000 odd runners we made our way to the pens and though it was a bit nippy at 8 am we knew this was going to change fast. 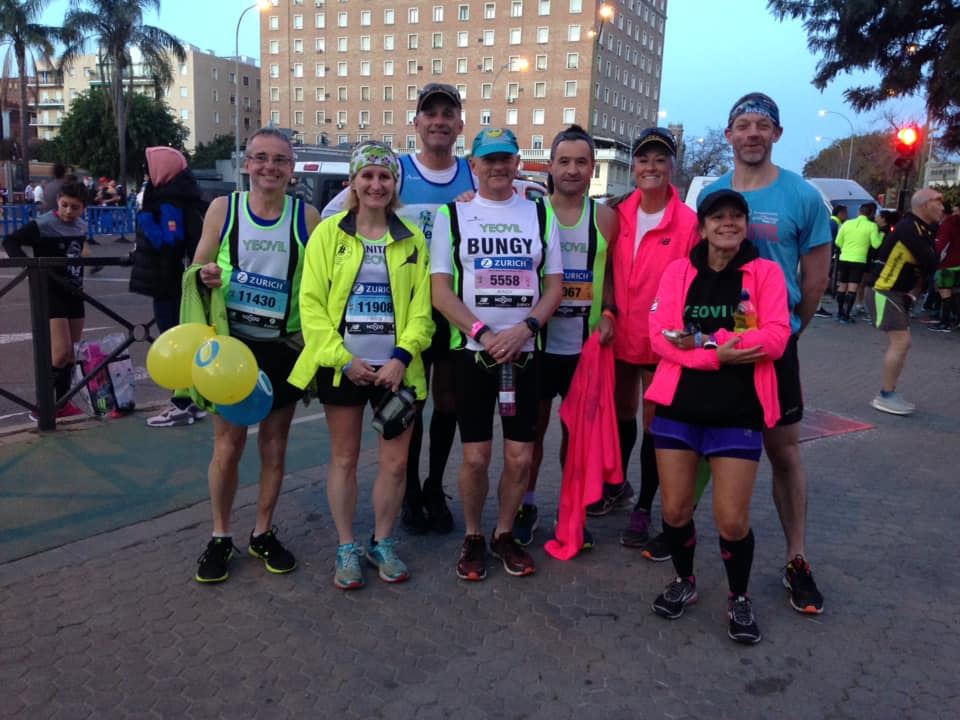 8:30 was the start time and we were off, the Pacers had large balloons and they lost most of them before they were over the line, not sure why they don't use Flags. Kev Brittle was the lead runner for the Club with Steve Lye close behind and Nikki was with Simon trying to get a sub 3:45. Around the course, we had a few none runners from the Club that were taking photographs and posting on Messenger on how we were all doing. As the morning sun came up the heat did as well although there was still plenty of shade from the buildings. There were plenty of Aid stations along the way and I came close to stopping for a Pint but never did.

As we started to cross the line the Sun got a bit hotter but we had PB for Kev, Steve, Simon, Nikke, Louise and I think that's it. At the finish line, we waited for Lynne to finish and as they ran past us a great big cheer. 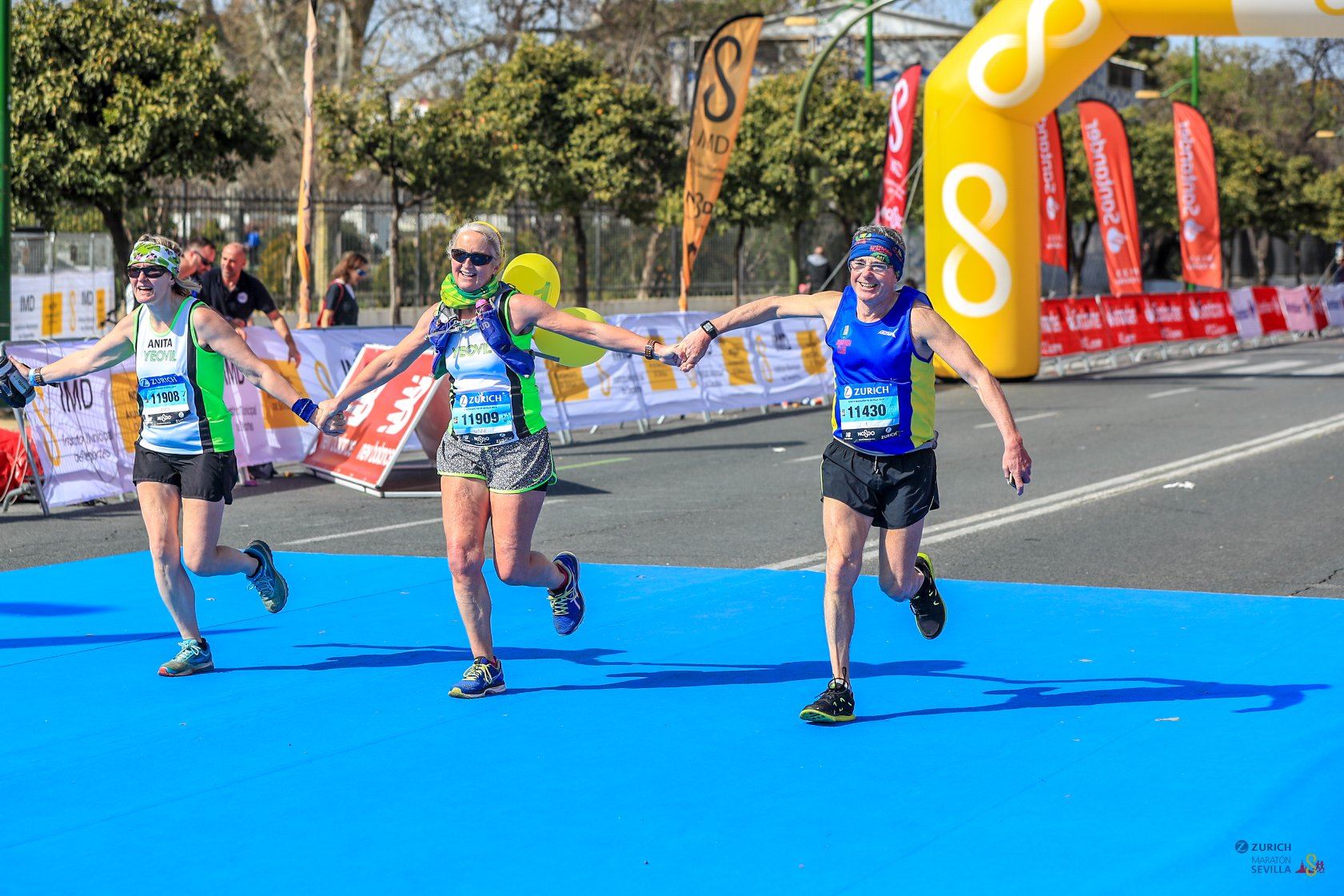 As we were running a big thank you to the non-runners that helped set up the Villa ready for the presentation and party. 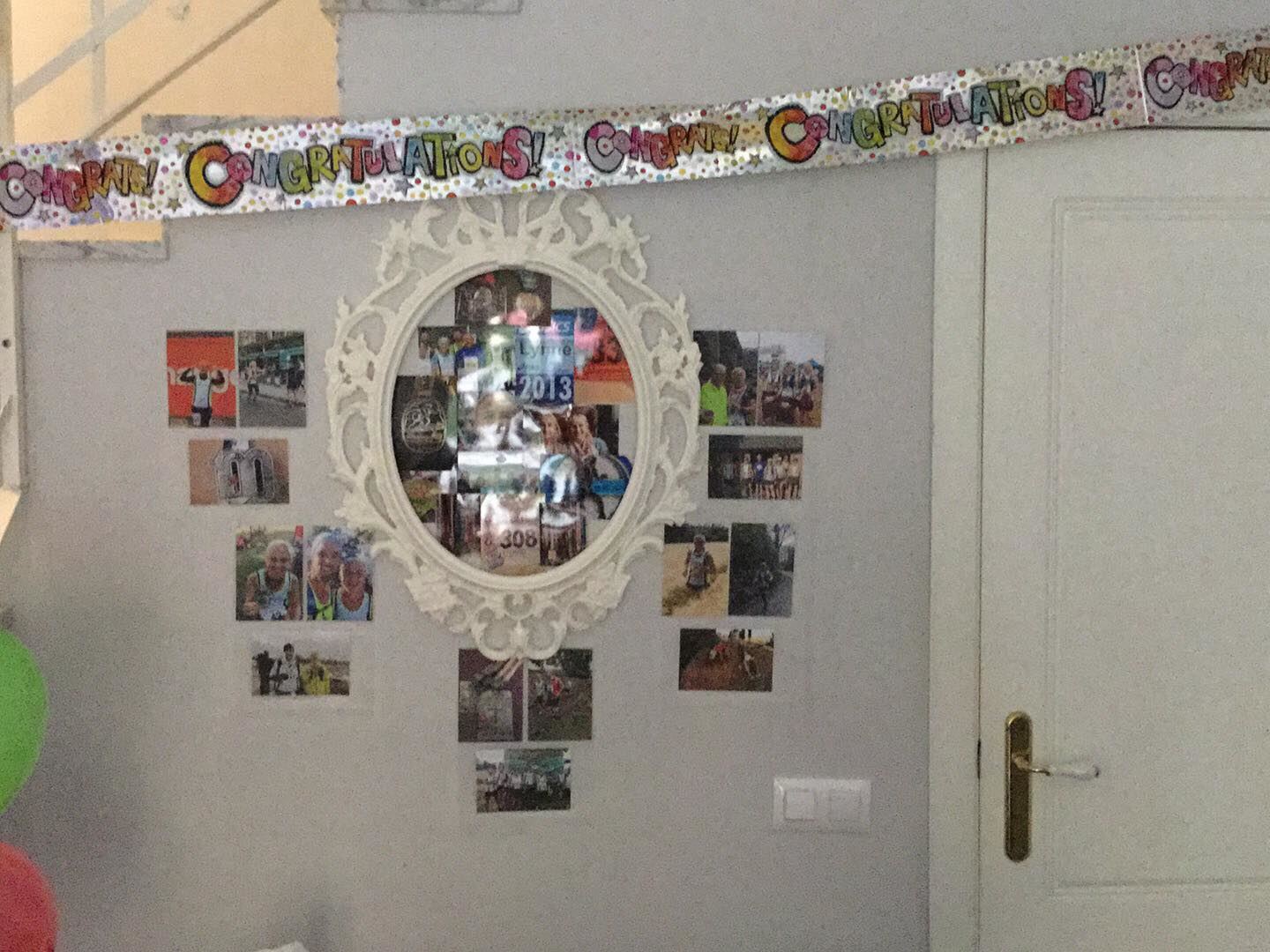 The Hotel Group arrived at the Villa and then had the speeches and Lynne was given the Blue and Yellow Vest, also a Phot Book that the Club got with some of the Marathons Lynne has done. The Speech I did can be seen here.

We had a photograph done with a few in our Pink Jackets and a Western Gazette so just need a small write up and send it to them.

So much more went on including trying to get a free Bus Ticket but you needed a Race Number and a correct name, great views on top of some mushrooms, happy hour in Hard Rock and loads more. It was really a great long weekend and may be will be repeated next year or we try another European City. 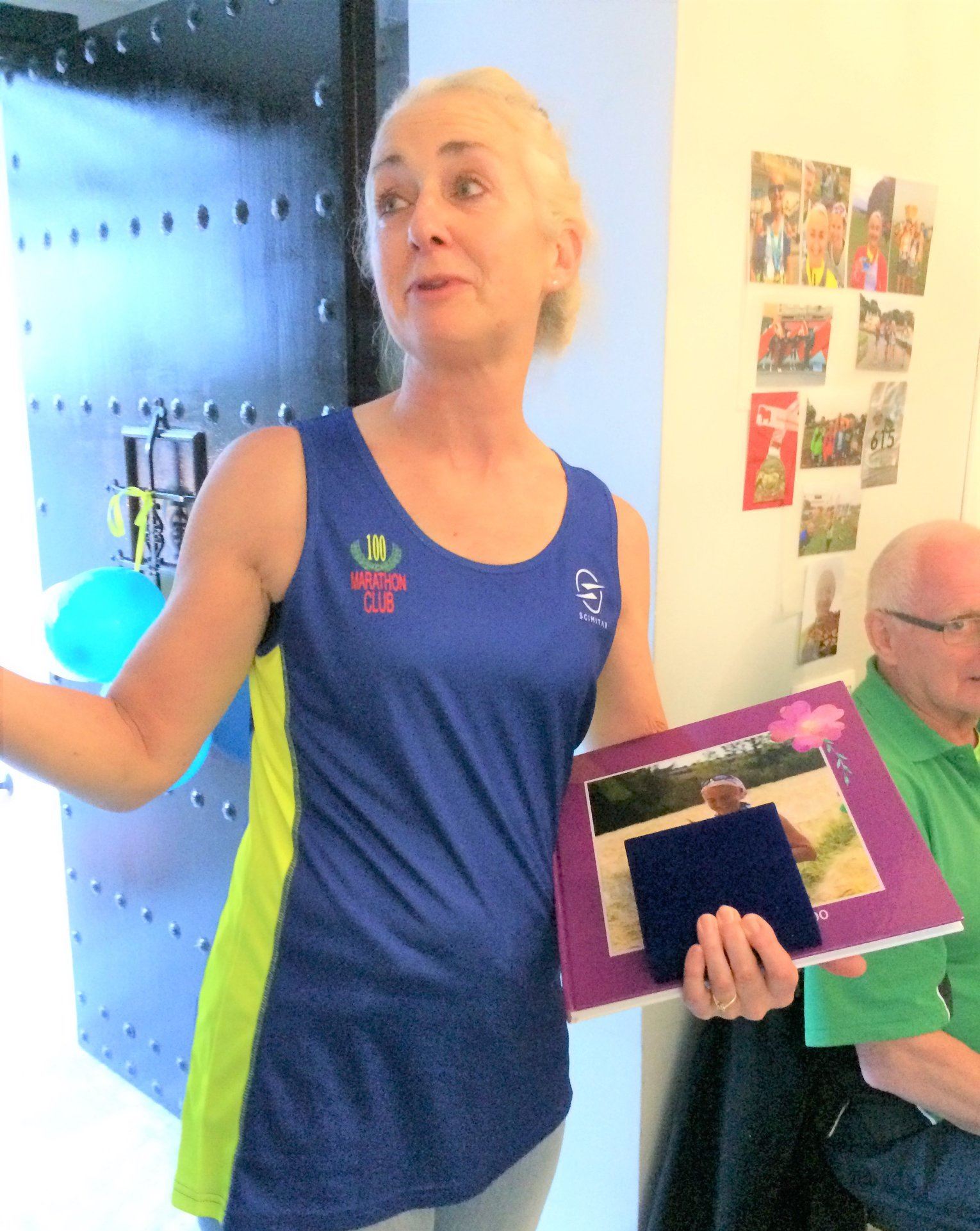 From Lynne:  Thank you to all my dear friends, from YTRRC, who either came out to Seville with me, sent me messages of support, or wished me well. I've had a fantastic time, a weekend I obviously won't forget. A special mention to Guy for presenting my shirt and the wonderful speech you gave, my photo album, the surprise party and for all the hard work that involved. My cake, thanks Fiona, and all the food at the party. The best night ever. Love you all xxxx 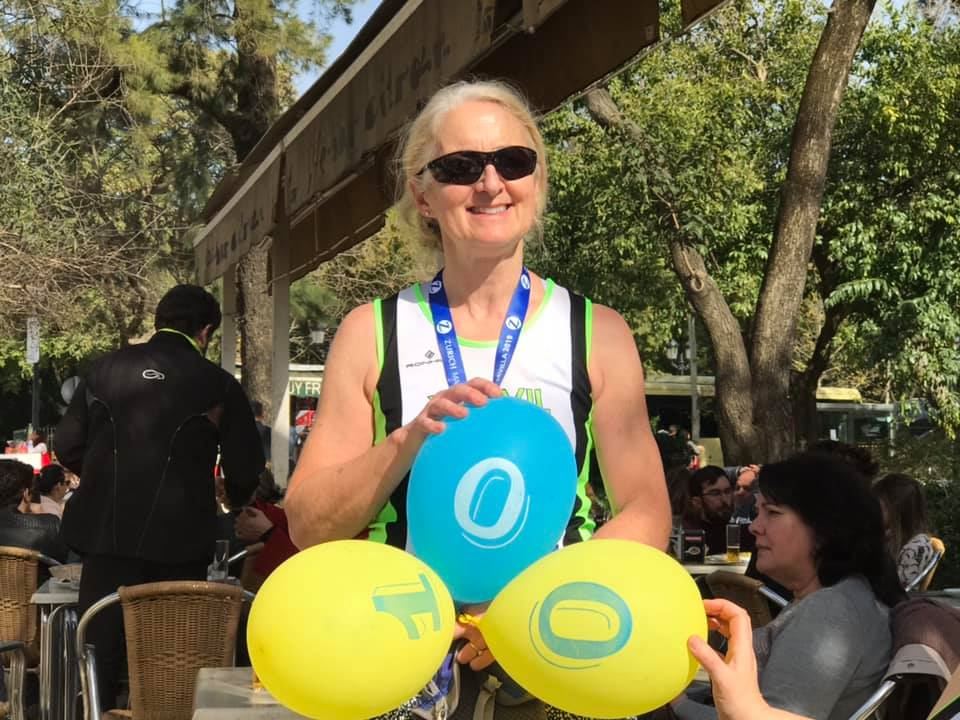 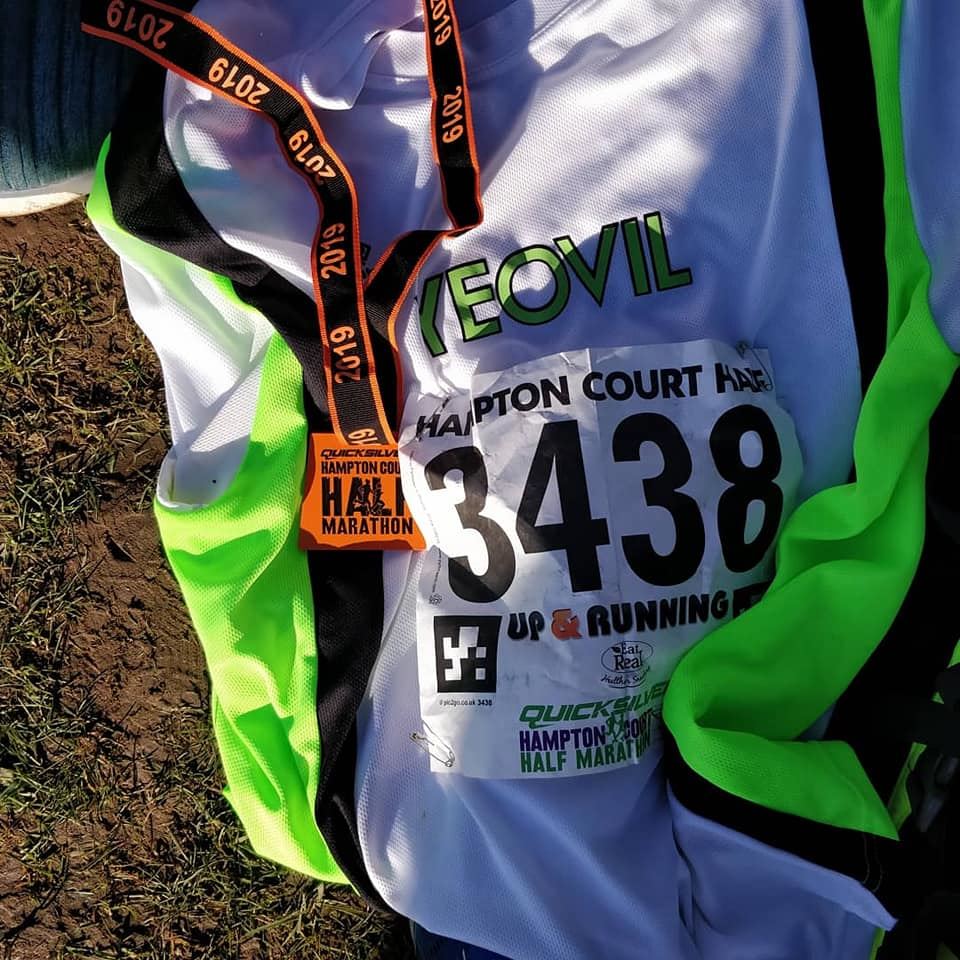 PUB RUN – WADEFORD (21ST February 2019)
Tonight there were five of us (Nikki, Simon, J.C. Phil, and myself). Nikki and Simon led. We started by climbing Foxdon Hill in the dark. We then descended down into Chard. We ran along streets and paths and reached the A358. Crossing over we ran out past the re-cycling centre then passed a group of friendly Chard Runners coming down a path towards us. We then reached the A30. Turning right then left at a roundabout we ran more streets and paths until reaching the A358 Axminster road opposite the church. We ran a little way towards Axminster then turned right. These streets took us to a point just west of the town centre below Snowdon Hill. Turning right we saw a fox. A little while later a cat ran across the road. We then climbed in the dark back up to Foxdon Hill, and down again to the pub. It was a fast paced run of about 6 miles. Running round Chard made a nice change. Thanks Nikki, Simon and all. As ever the pub food was good.