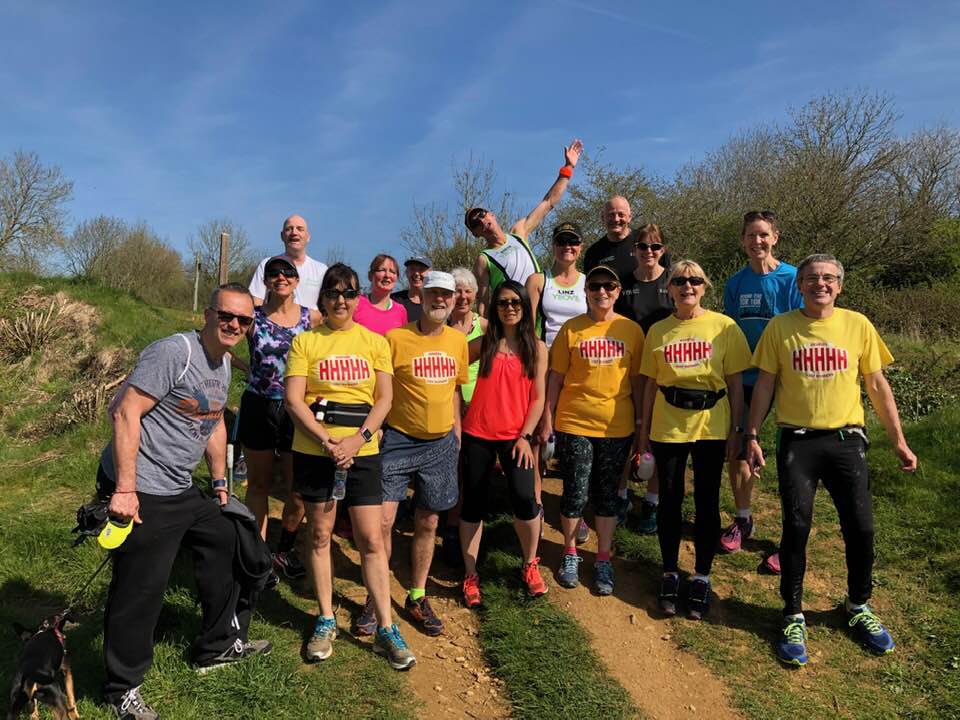 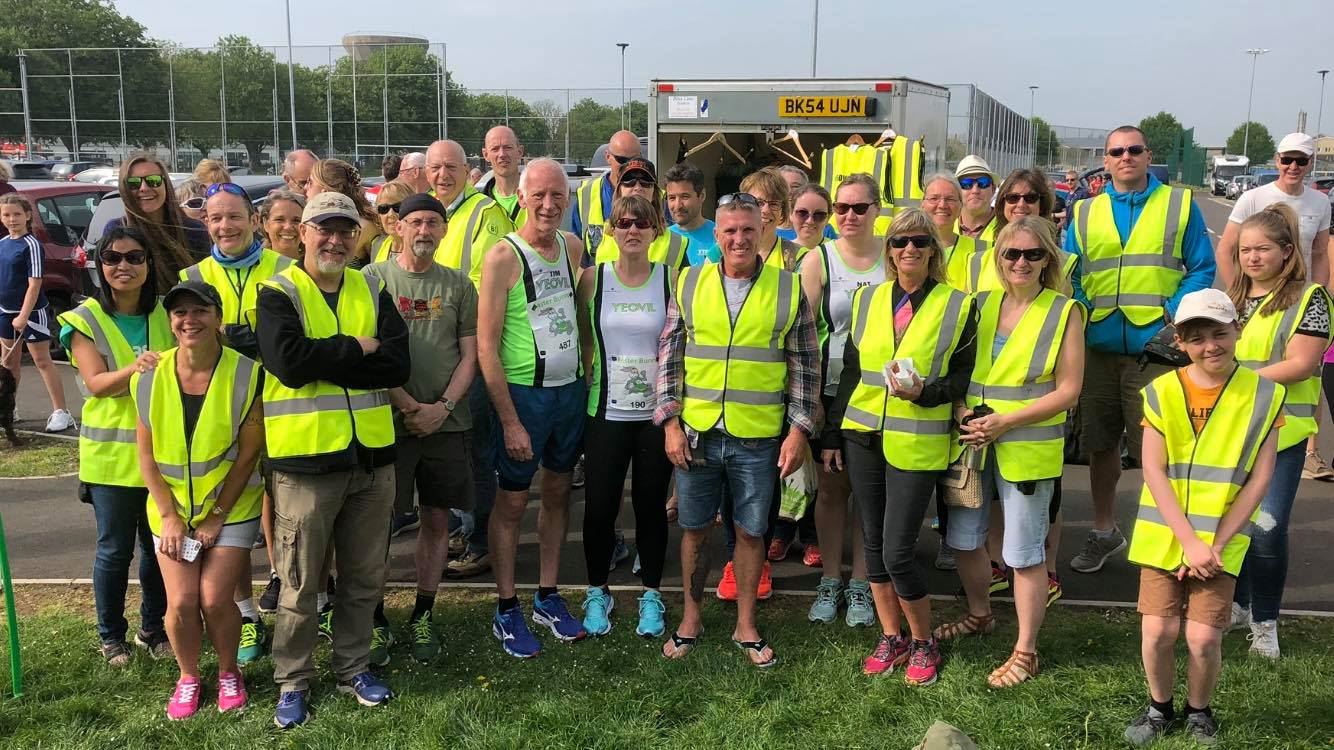 First of all, a big thank you to all the Club that helped today, to say it was difficult is a bit of an understatement. First, we had the road works that meant a new route, 5k as well then as soon as the race started there was the A303 incident that proved that the Club were right to send three young men on a Traffic Management Course. The impact for all the main Junctions and the Crossroads gave all the marshals a hard time, more on that later.

The Race started at about 11 and then 3 ladies who were in the toilet appeared 5 mins later and set off after Adam the Sweeper, then a car came through that had been caught in the traffic and he parked up and set off wearing a Jacket, well it was a bit windy. Glad to say all four finished ok. The Fun run was very well attended and Adam and Korrine did a great job as there was a long queue to collect numbers but still, all went well and thanks to both of you.

The Race went well with no major hiccups apart from the extra traffic, oh and the Water Stop running out of water and cups but we could not resupply due to the volume of traffic. I had 500 medals and in the end 458 runners, this is the highest entry we have had for a few years. Well done to Ben Lloyd the winning male and Serane Stone first lady, both did extremely well. For the Club, we had Benjamin Mahoney first male and also the first time in a Club vest with Elaine Hurley our first lady, well done both of you.

From Race HQ you could see the number of Cars using the Crossroads due to the A303 and the pressure that put on the team there. The traffic passed the Museum Car Park as well so it was getting hit from all sides. Thanks also to all those that stayed to help take down and clean the Nuffield Centre, the girls running the refreshments were very busy with well over 600 people that were there today.

As with every Race we organise we learn on any mistakes and try to make it even better next year. The work that goes on in the background with Signs, Risk Assessments and sorting marshal points, laying the course it just goes on. But it's worth it once the last runner crosses the line.

Thanks again and it just would not happen without the great support for YTRRC. 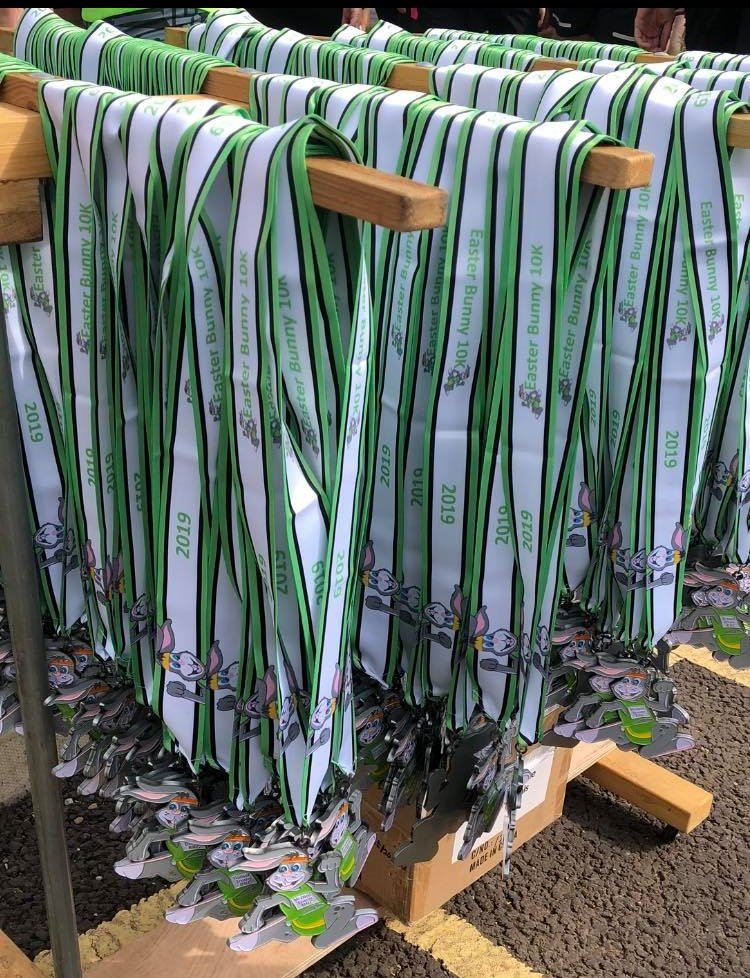 Some of the feedback is that some loved the alternate course and some preferred the old course, and here are some emails I have had:

I hope you can now relax after hosting such a great event this morning.

You had fantastic marshals out on the course, very encouraging.

Guy.... just wanted to say thank you for organising today’s Easter Bunny 10k....I’m not too proud to say that I struggled... but I crossed the finish line!!!

Please say a massive thank you to all the volunteers from Karyl, Terry and Kay 👍👍👍

This is a post from Marathon Mike. Garmin Marathon

From Lesley: Street parkrun completed this morning. A few YTRRC runners there. Three laps around the sports field and flat so probably the best parkrun time this year. Not sure what happened to the second photo - sorry Taryn but I did want to include you as a Yeovil runner in attendance! Benjamin Mahoney was also there and finished 2nd overall I believe and a PB. 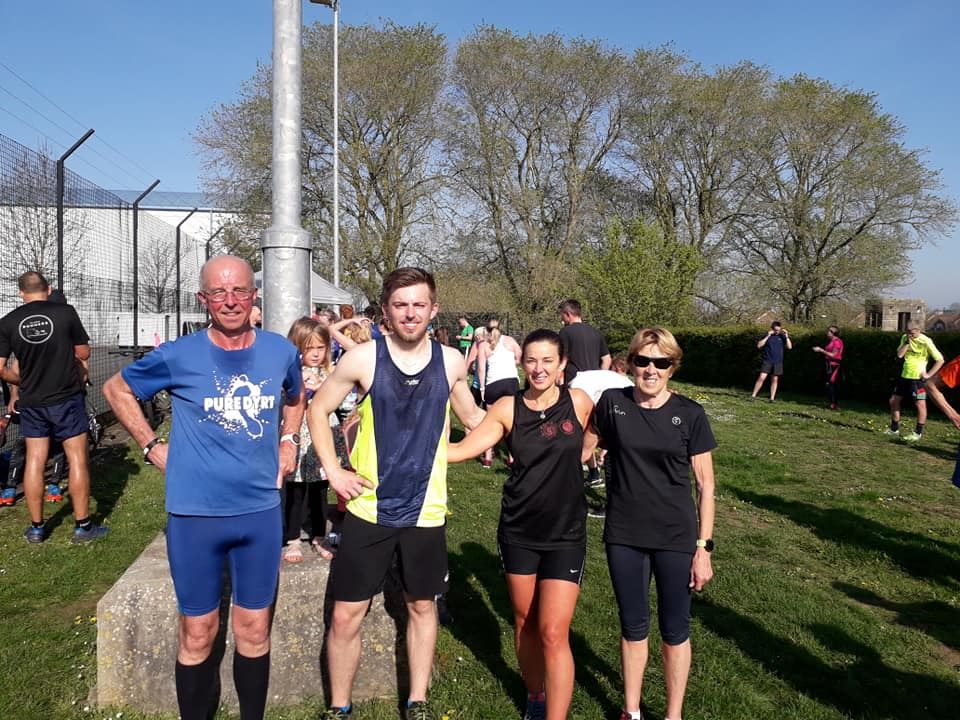 Saturday saw the Fred Fox Hash and a great turn, a big thank you to Martin for organising and the helpers that laid the course. I have never done a hash before and it was a great laugh and even though the course was around 4 miles it still took about an hour and a half. 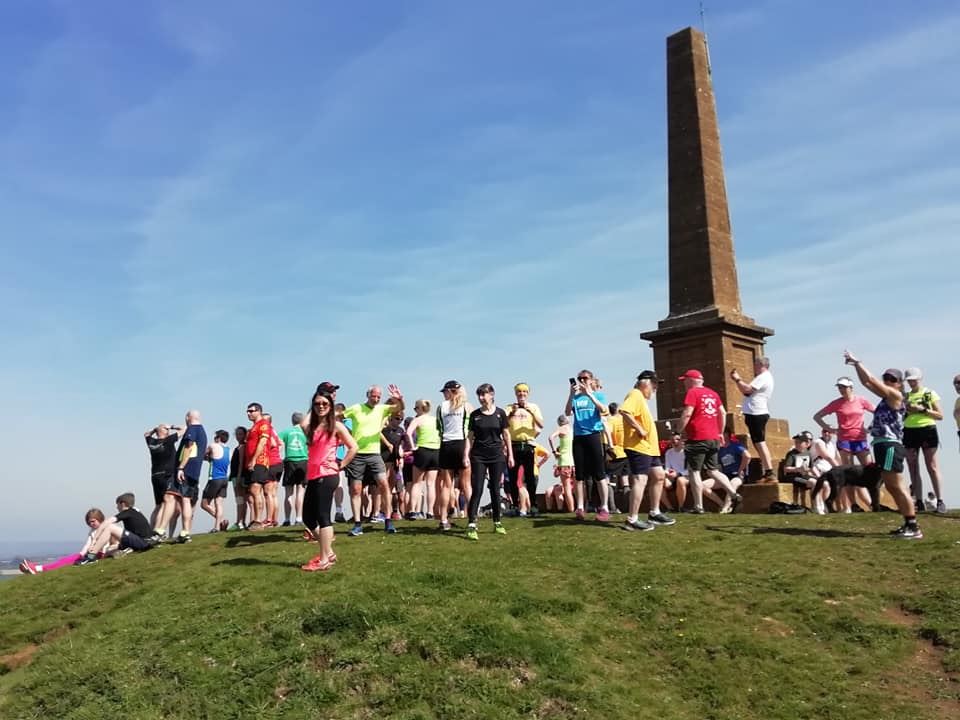 So what is a hash, well you start to run and look for some white dots on the floor (made by flour), if you see one you shout out and follow the trail, hopefully, you see another three and you are on the right route, but if you see a circle with a cross on it you have gone the wrong way. Then there are them there fish hooks some with lines on, that means the leader has to run back and the last person and a few more lines mean you all have to. 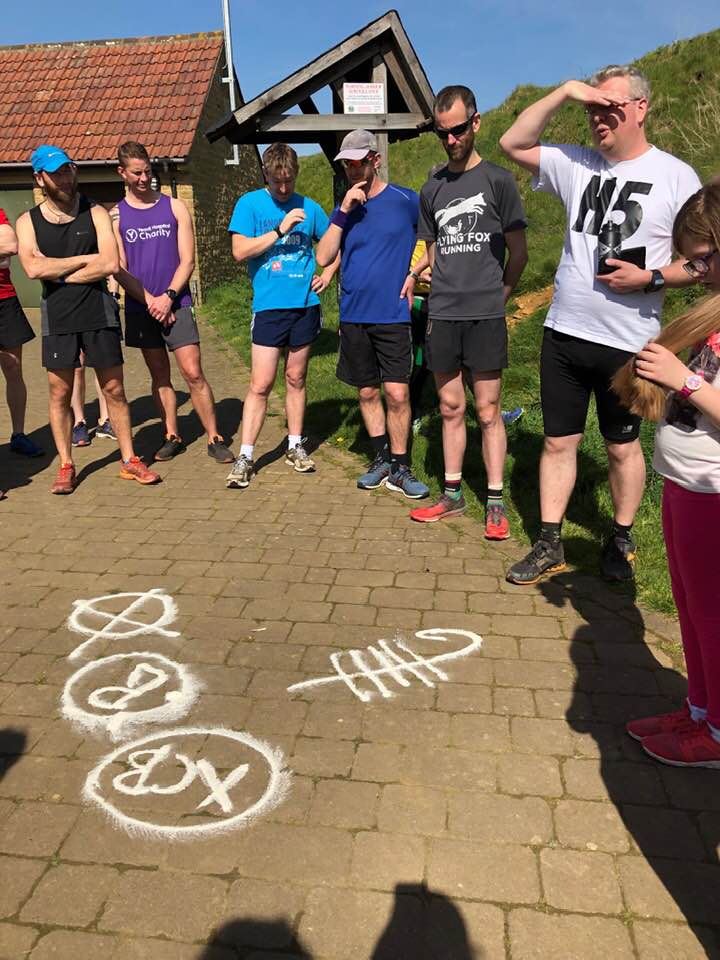 I forgot, a circle with xcb means Hot Cross Bun and B means beer. Hope all this makes sense. All in all a great day and all to remember Fred Fox who sadly died a few weeks before Pete. Money was also raised for St Margrets Hospice over £220 so well done all. There were some old time Hash experts on hand to show us the ropes.

It was also a lovely hot day with plenty of hills, we are so lucky to have this on our doorstep. Well done to all those that took part.

From Tim: All club members are invited to take part in this annual club supported event in memory of Dave Richardson.
Dave was a very keen track runner and a very valued member of Yeovil Town RRC.
You will be asked to supply me ( Tim Hawkins) a recent race time so I can convert it into a 3k time. This will then form your handicap time.
The idea is that you race a 3k and the runner who is furthest quicker than there handicap time is the winner.
The club has two prizes on offer to the winning male/female.
All non-club members who train with me on the Friday night group are welcome to take part but will not be eligible for the prizes

It would be very helpful for me if you could message me your recent race time so I can get as much preparation beforehand as possible.

You can leave a time on this event page or e-mail me at runnerhasbeen@yahoo.co.uk

From Dan: Good Friday 10 Miler, in the sunshine. 22 degrees (Medal and an Easter egg). Cheeky out and back, mostly flat with a few hills,

PB and Yeovil Town RRC 1st male for me, with a PB 1:06 Steve Lye went of in typical fashion, like a bull in a china shop! But had to slow down due to the heat! Nothing to do with me overtaking him! And done a respectable 1:10 1st Yeovil Town RRC old boy!

Then had to stop for an ice cream to cool down in the sunshine afterwards. 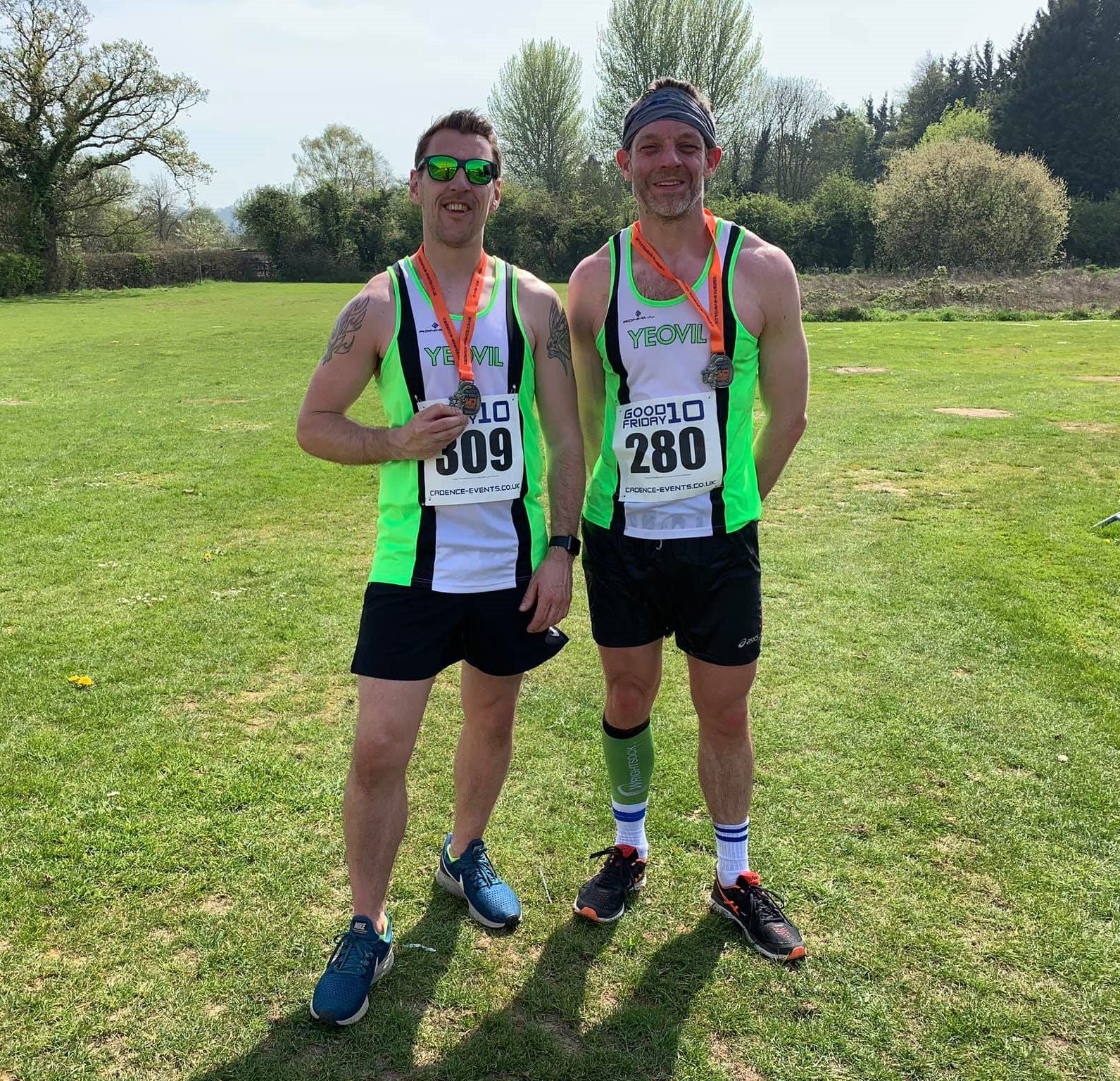 PUB RUN – MELBURY OSMOND (18TH April 2019) Tonight was a welcome return to the pub on the side of the A37, which having had a face lift and change of name made a nice change. The air was dry, warm, and slightly humid. There was a good turnout for the Pub Run and Brian led the main group. We set off heading south east across three fields and reached the lane at Stock Wood. We turned left and continued down the lane heading towards St Edwold’s Church. Entering the field I stood stationary as a large brown horse ran towards me. At the last minute he/she thankfully changed direction and ran off somewhere else. Next, a path took us across old wooden boards placed on top of black mud. We climbed a very steep grassy hill and entered a track. We ran down the track heading towards the A37, and turned left then right. Passing through bluebell carpeted woods, we reached a gate and crossed over the A37. We ran into a field of numbered sheep and lambs, and continued along a stony track. Three of the group split off going right. The rest of us continued leftwards climbing towards Evershot. Before reaching the village we turned right and ran up the track to the gate. We continued towards Melbury House. We passed a few deer, and loads more sheep with lambs. We continued through the grounds of the house with the sun lowering itself to the trees on the left. We continued through Melbury Osmond then crossed more fields to get back to the pub. Thanks Brian and all. It was a good scenic and physical run tonight. 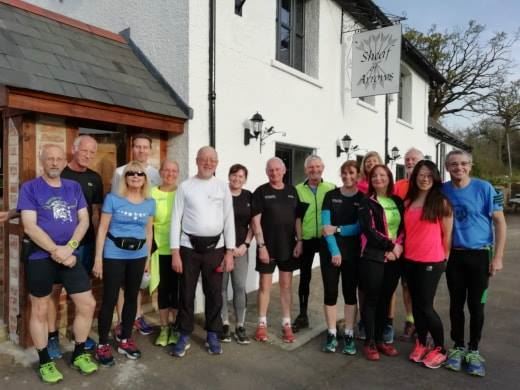 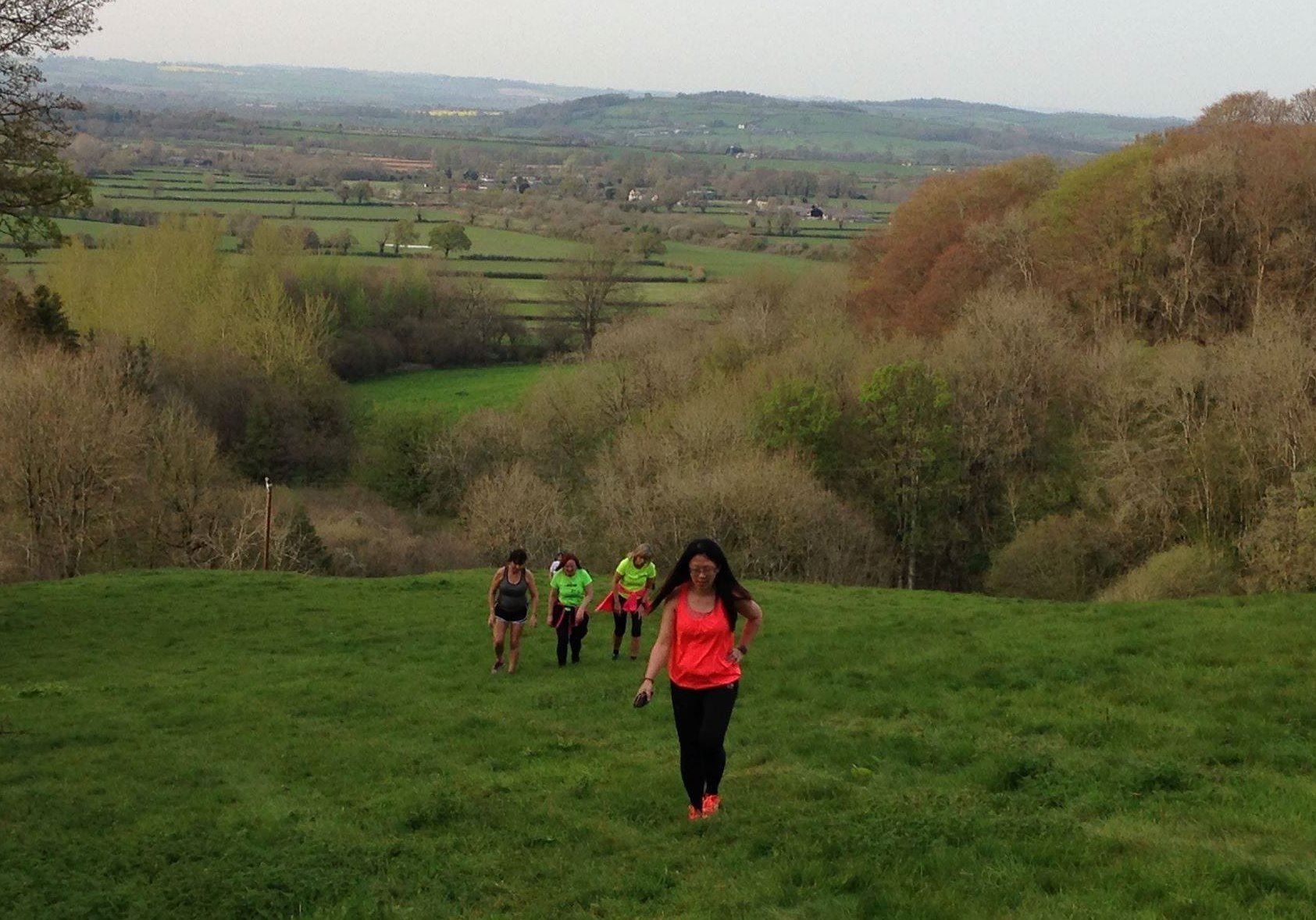