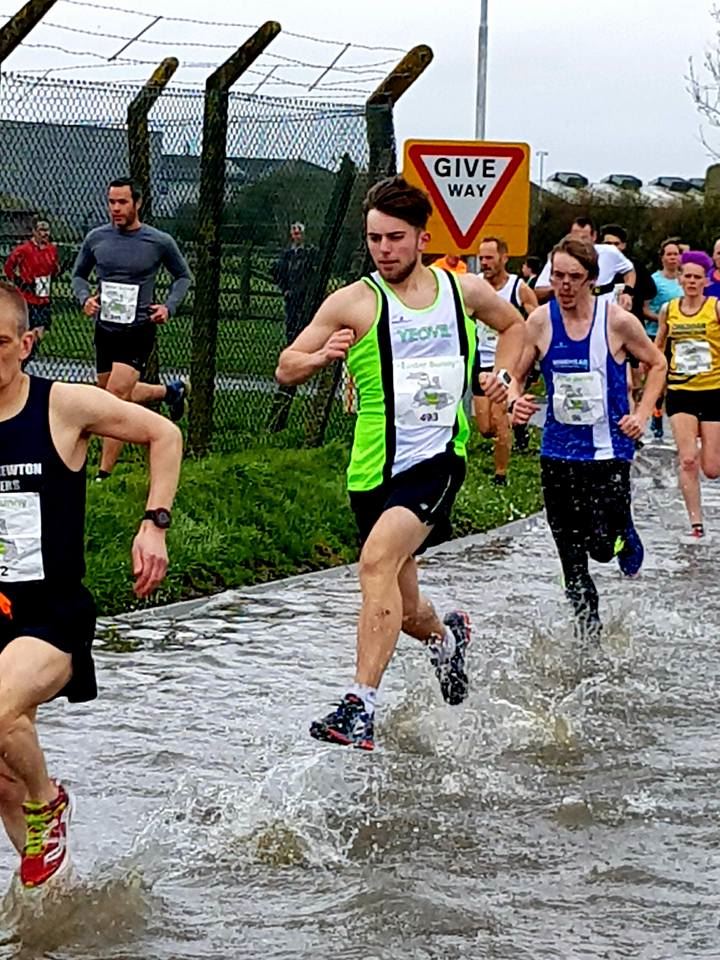 Last night and this morning I was worried that we might have to call this race off and even looked at a new route to try to avoid the flooded road but nothing really fits to make it 10k. I got there this morning and of course, it was raining. Just thought sod it, its only water. We soon started setting the Race HQ up and the team set off to lay the course. Then more turned up and the hot water was on, cakes slowly arrived and a hive of activity to get this race up and running. I had received two emails from people asking for a refund and telling me the race would be called off. I guess they were not from Somerset, have they not heard of the Somerset Levels?

Katie Brooks and a few set up the Fun Run and what a great turn out we had for that and a good effort from Katie to take over from Adam Hawkins and do a super job it running the Fun run that started on time and the kids loved the medal all 69 of them. 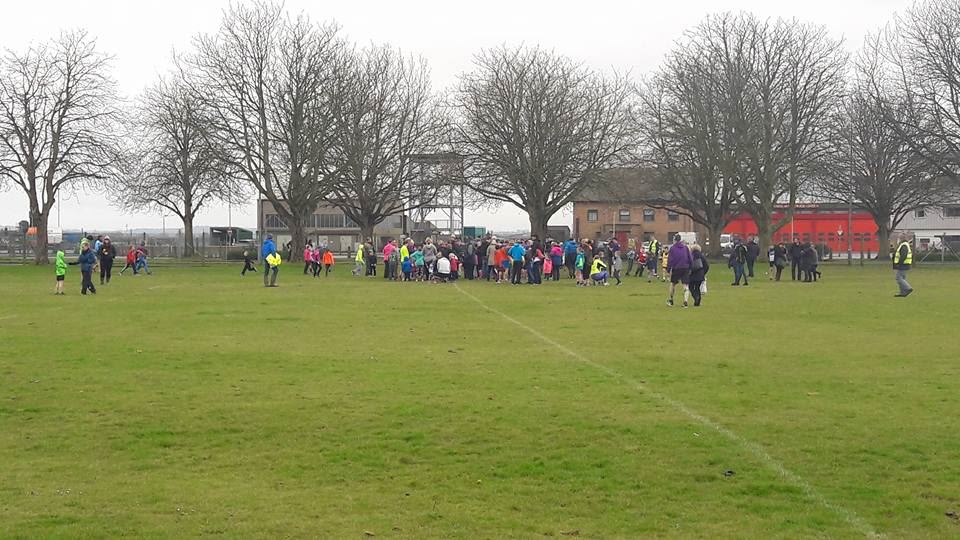 The main race started smack on time and with 409 runners including two pushchairs, one partially blind runner and the odd road with some water in it. I decided that we would have a few catchers to help the runners that used the bank and decided not to run through the flood, which was a shame as it took us ages on Sunday to fill the road up with water. Sadly we did have one lady who fell on her ankle trying to run through the water but these things happen and I have seen people fall on sunny days with no water. I think she is Ok but was take to A&E to make sure the ankle was not broken.

Out in front, we had our man on a bike Dave Gillard. 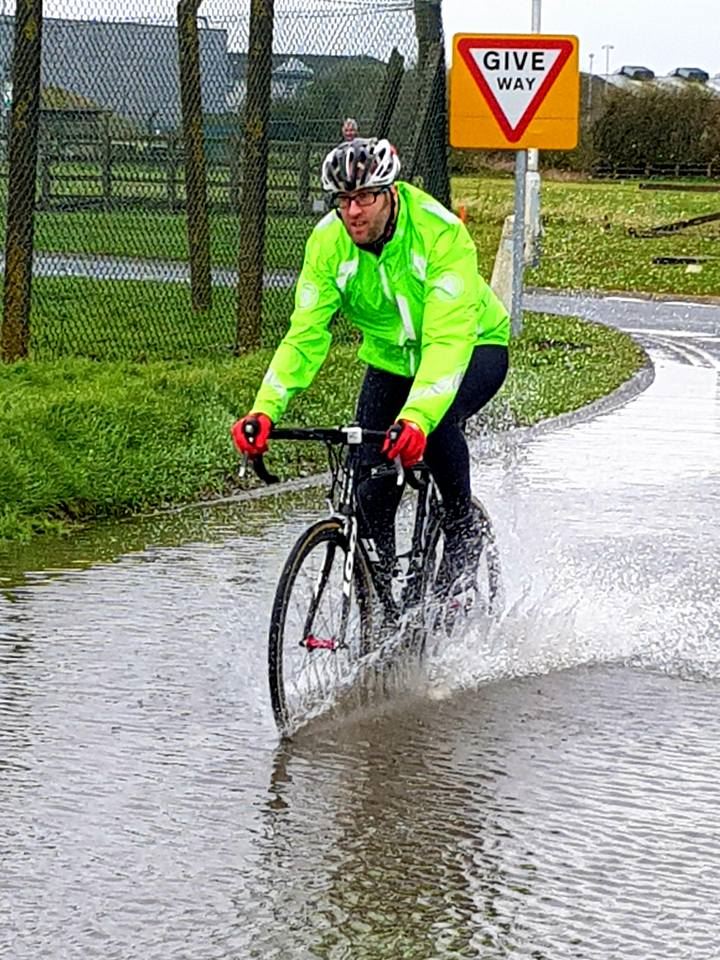 Dave had only one instruction, is the lead runner gets close to 30 mins he had to slow down, this worked a treat and the winner came in with a time of 31.54 a David Long from Bournemouth AC. 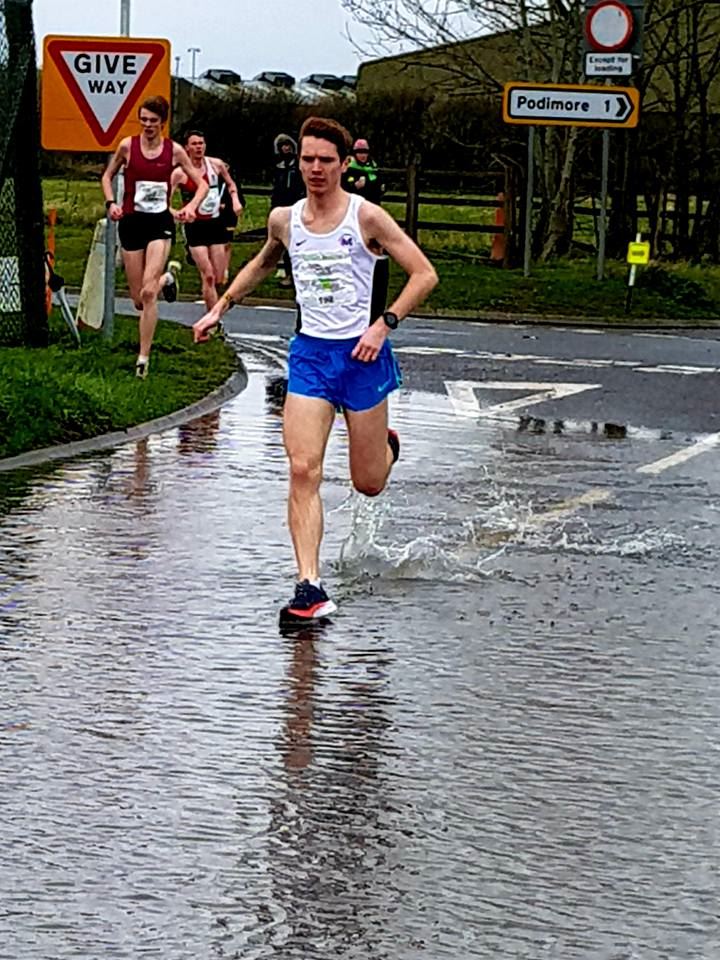 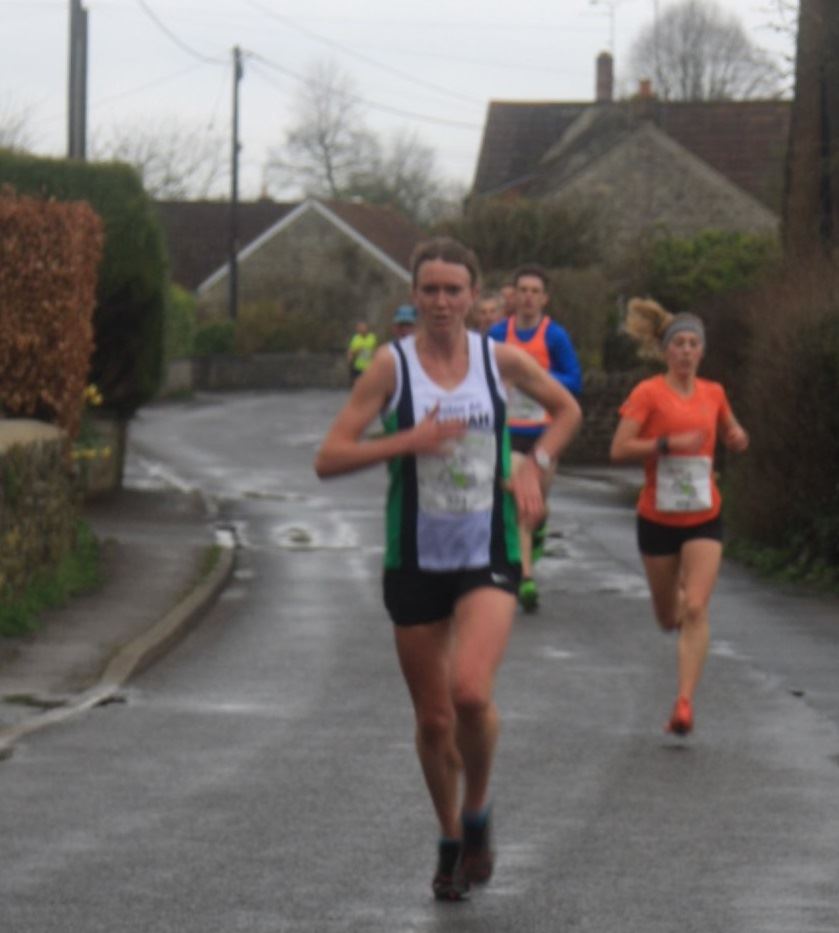 We had our two pacers at 45 and 60 mins and it's not easy getting this right, Steve was way off. 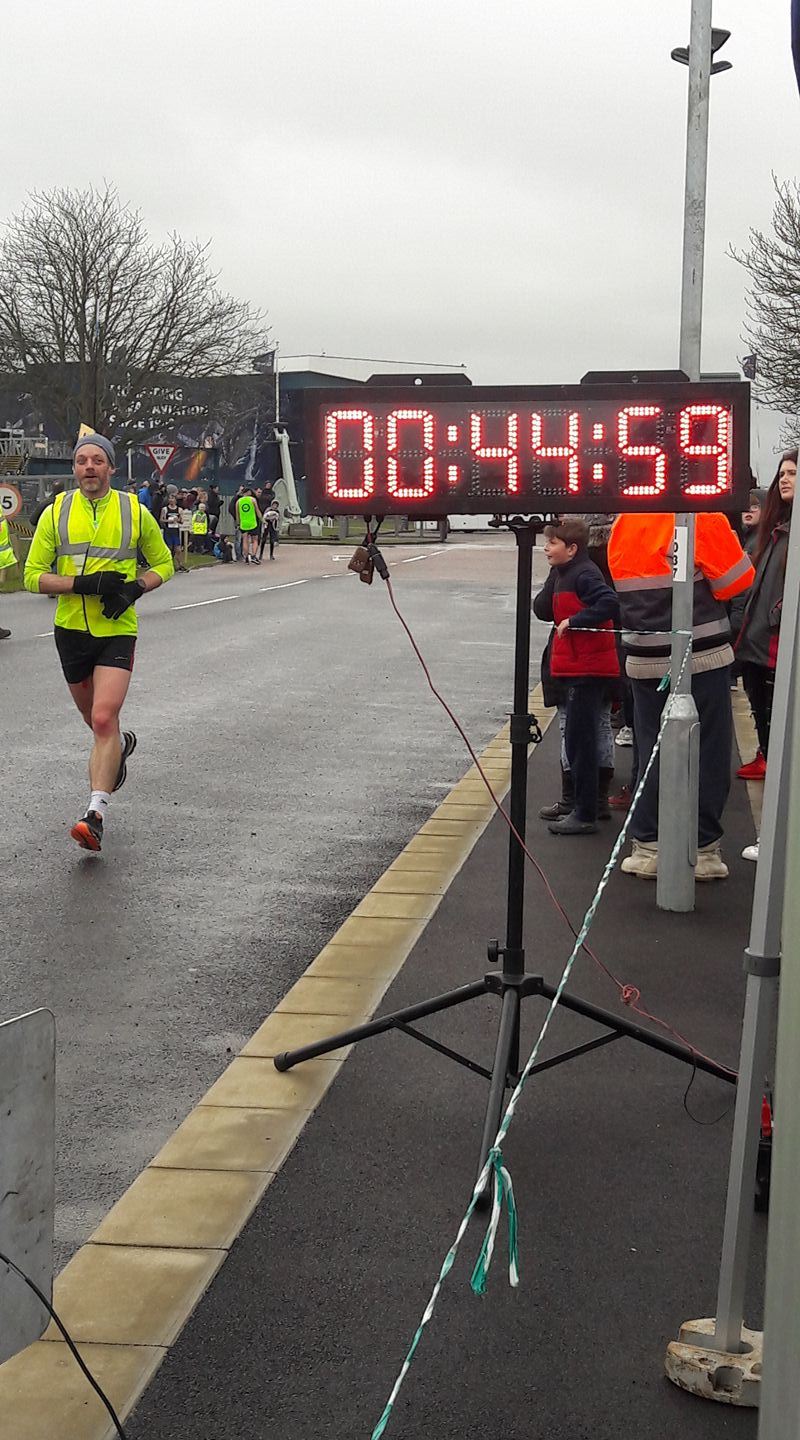 As runners crossed the line I asked most how they got on and all of them said it was a great race and that they enjoyed it. This was only possible because of you, the Club. It was great teamwork and it really took the pressure off me when things just happened and worked well. To all the marshals that did a sterling job and I have already had a few emails from runners thanking me for the marshals and abuse, I mean encouragement that you gave all the runners. It took bloody ages to get all the medals out of the bags and onto the medal stand and my thanks to all the kids and parents that helped. Once again Denise and Mel did a great job feeding and pouring drinks before and after the race, with help from BMJ, it was also a great touch with the kids handing out drinks and medals to the runners as they crossed the line, brilliant job and the runners were also grateful.

Pete did a great job with the Prizegiving and thanked all the runners, then the clean up started and we soon had the Nuffield Centre cleaner than when we took it over. Kev Brittle stopped his Tri training and done a great job with his little Henry the Hoover.

From me, a really big thanks to you all, it's hard being a Race Director but made a lot easier with the help from you.

It is now only 9 days until the Summer 5k series starts, so please support this as I know you will.

From Anita:  Dorset Ooser Half Marathon by Badger Trail Events. Only 13.7 miles of hills, mud, trails and knee deep water. Fantastic, well organised great bling, t-shirt and tea & cake at the end. I was (I think) the first (and last) YTRRC over the line

:-D There was a marathon too! 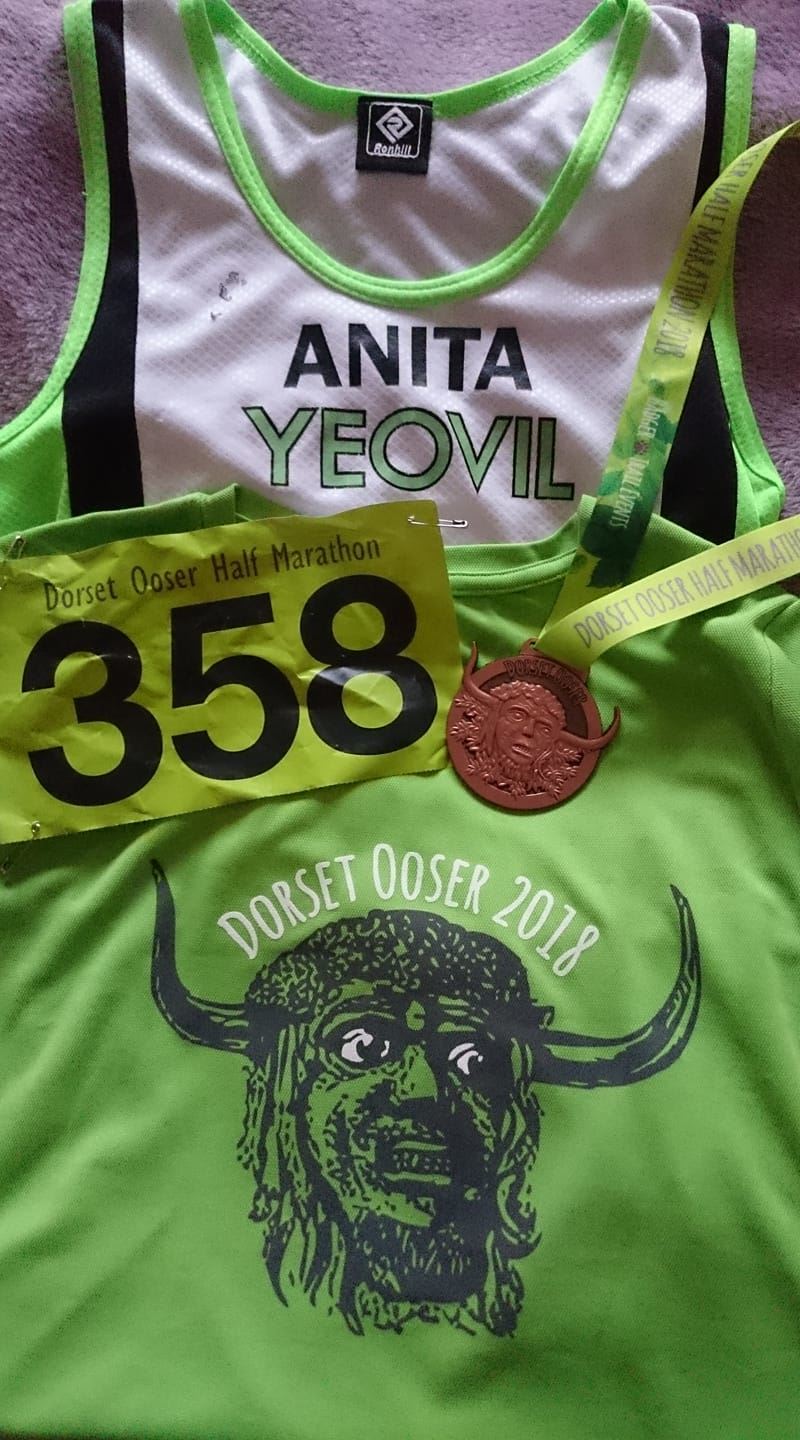 This month I have Manchester, Brighton, London and the Bad Cow double marathons so the blog will be on the Monday.

From Linda: 22 mile long completed. Thanks to the Crewkerne Running Club from South Petherton. Very tough especially towards the end. Not sure how I am going to do that extra 4 miles in 3 weeks time!! The weather was really kind to us but there were a few puddles. Didn’t manage to get a group photo at the start as it was quite rushed at the beginning. But here are a few from after. Well done all. Thank you, Louise Ward and June Moule for your support around the course. 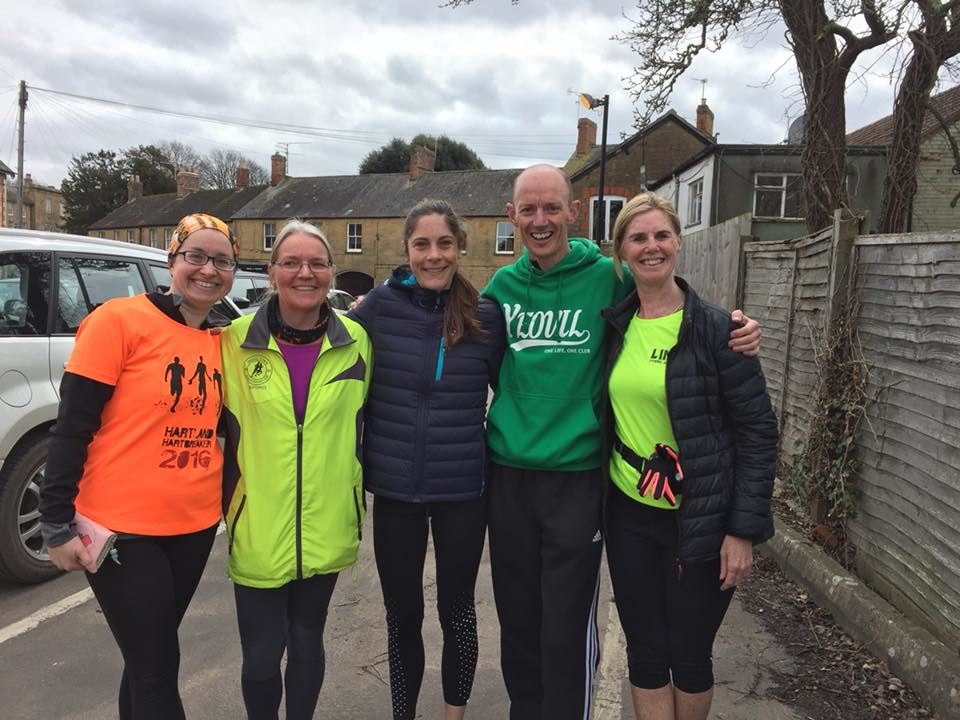 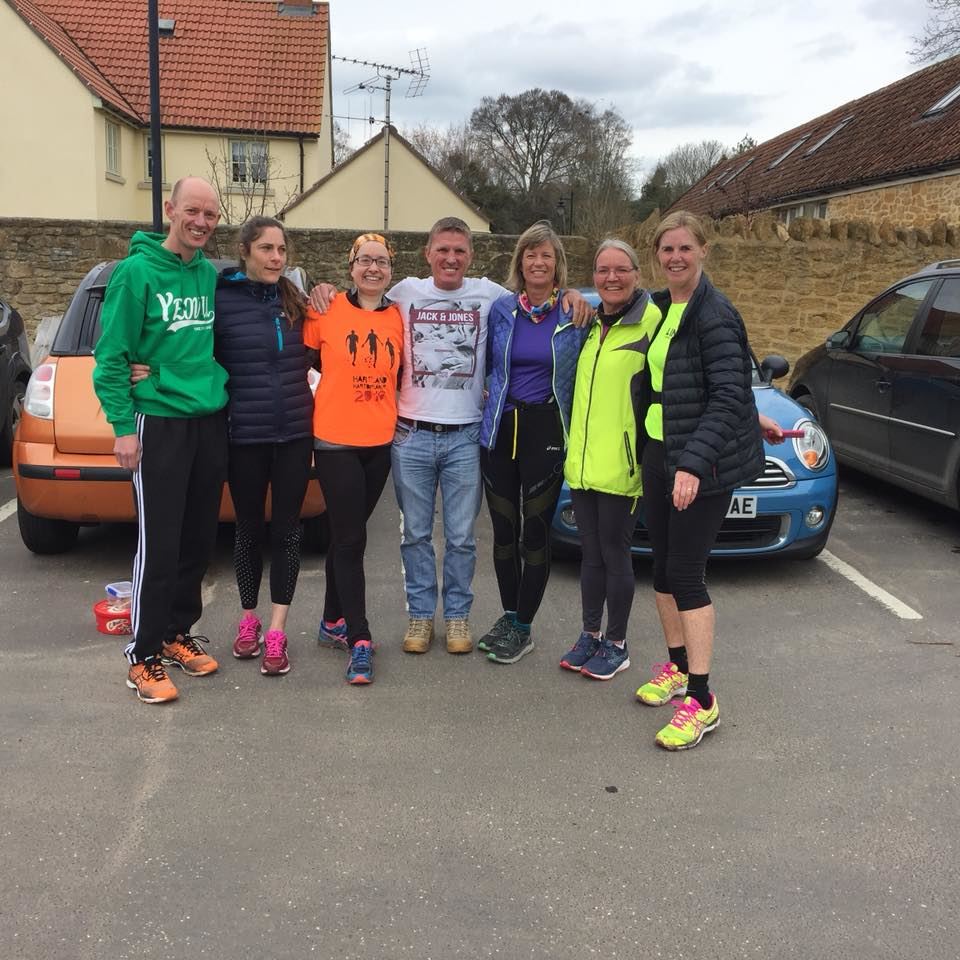 With this amount of rain we have had Montacute will not be on for a while so Club members hit the road again. 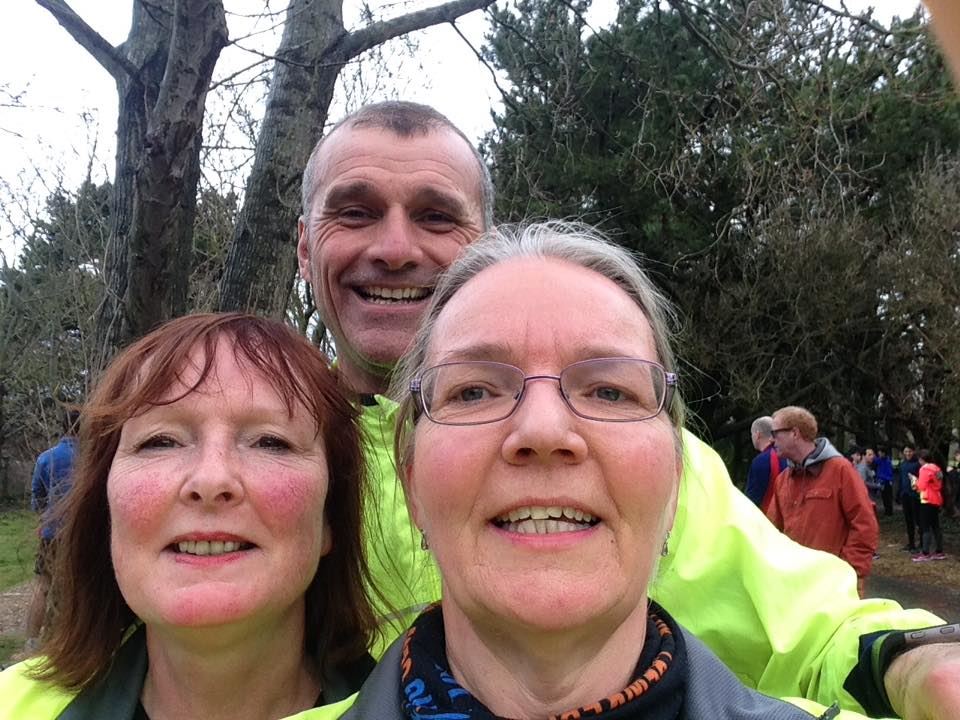 Lots of mud and puddles at Weymouth park run this morning. — with Denise Byrd and Stephen Warren. 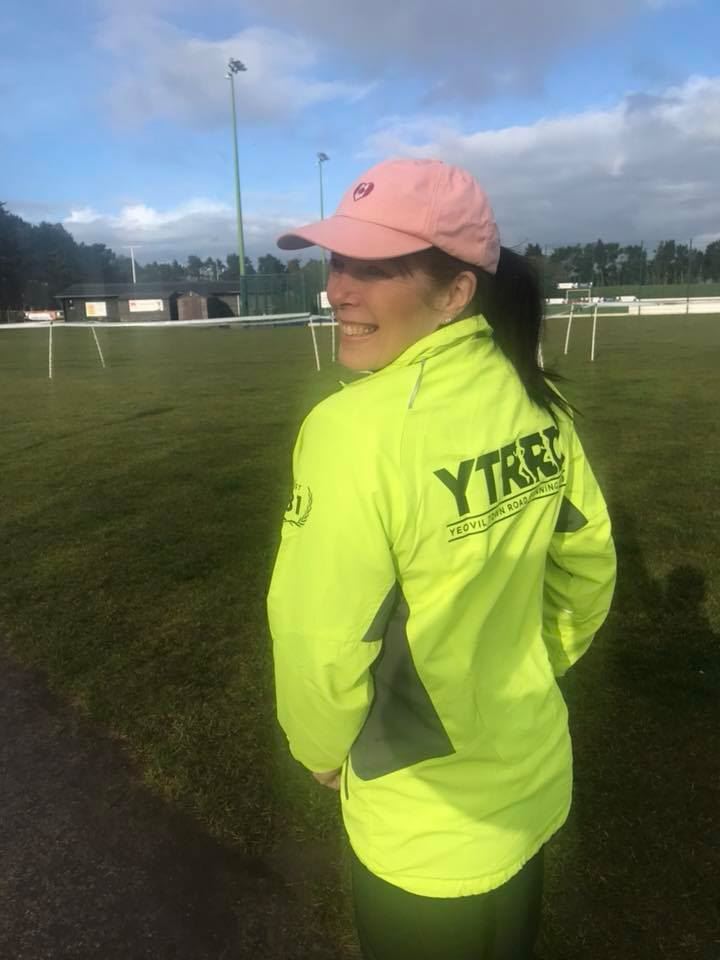 Jersey parkrun done! Sunshine and puddles and my new jacket! No incidents but a PB!! 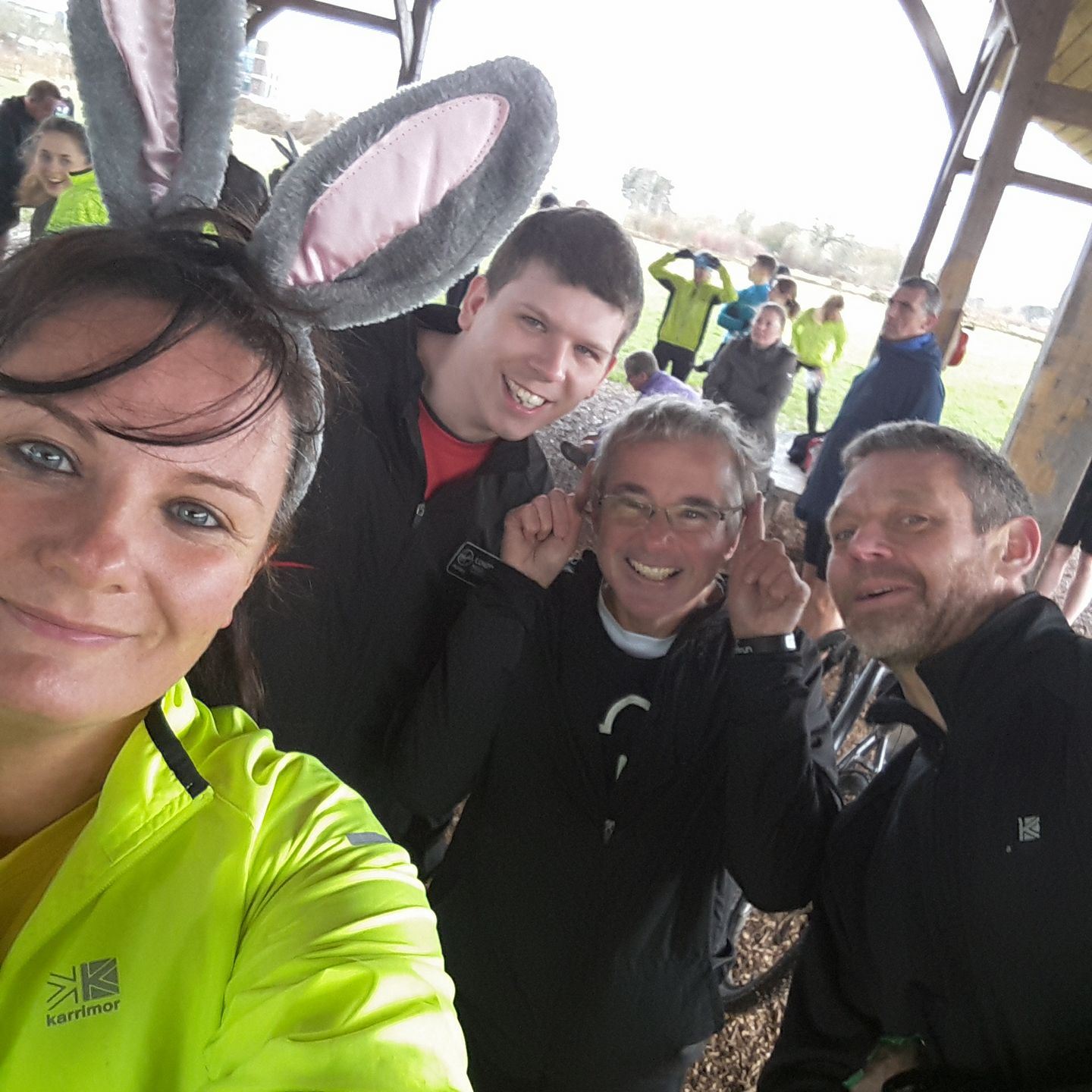 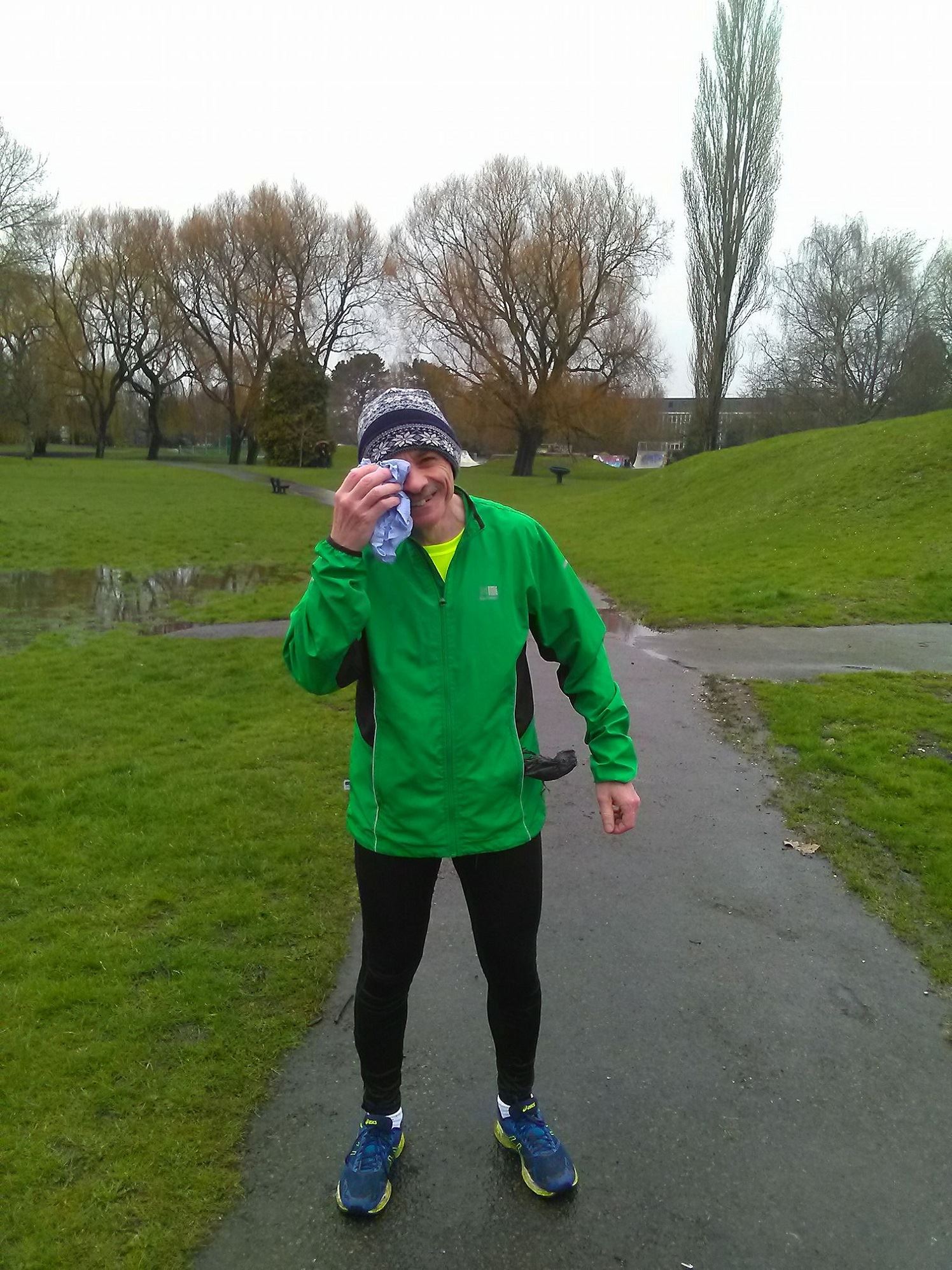 Salisbury Parkrun off No running around Churchill gardens today with all that water on one side of the course Back home for me now.

Well done to Steve Lye who ran the Chippenham 10m on Good Friday. 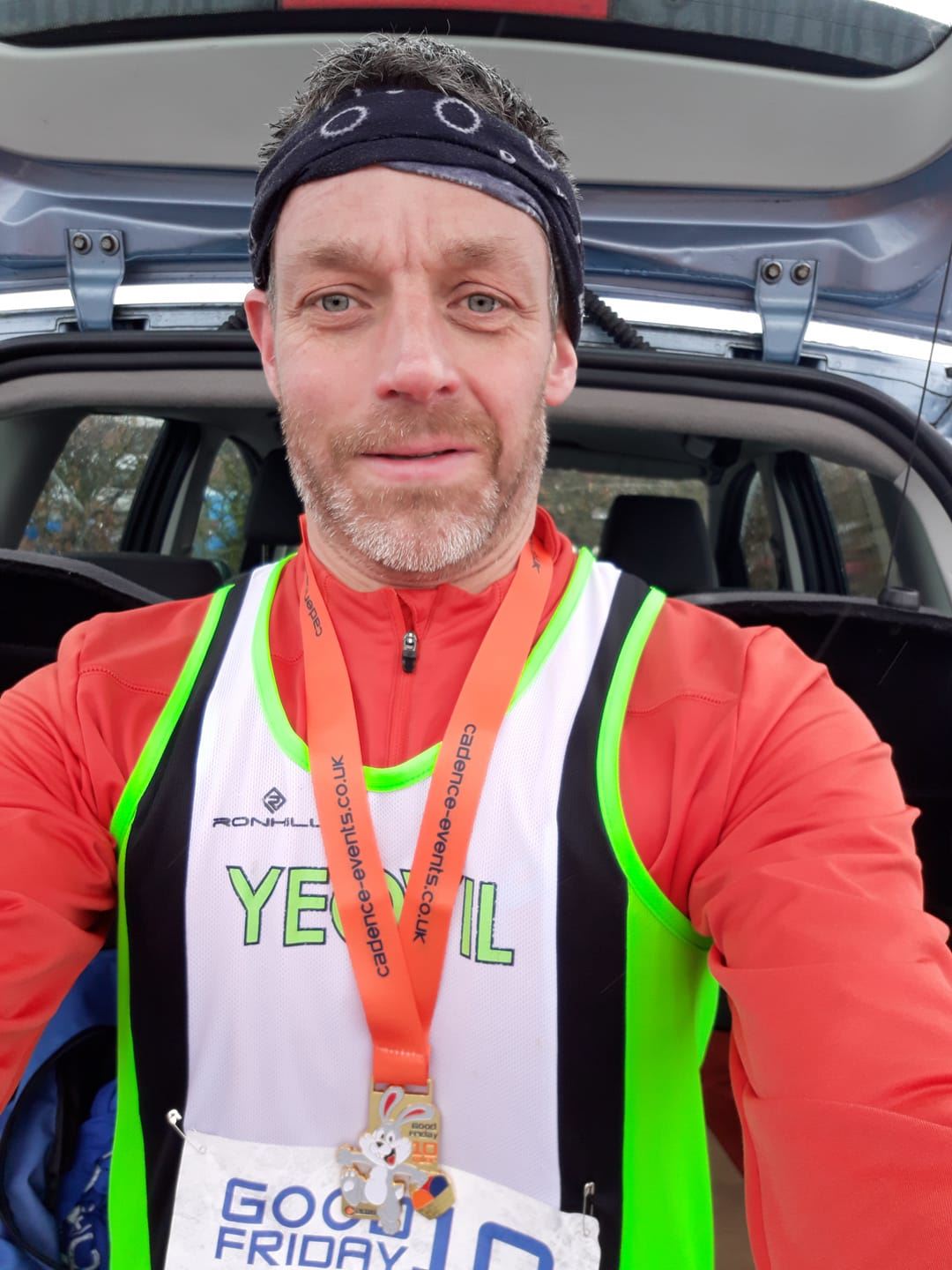 Chippenham 10 mile race this morning - chilly and damp - very egg-cited with the results and egg-actly what I wanted. P.b taking over 2 mins off of last year's time (p.b now at 01:03:57) and 21st out of 500 entrants. Happy bunny! End of Easter themed cheap puns and yokes! Our bunny medal is bigger than theirs!

With days becoming longer and warmer now, it is the perfect time to renew your spring/summer running kit. Some of you may want to get some new running gear for race day, with the marathon season approaching quickly, or have a look at our SportsShoes Easter Run Sale with over 300 products at least 50% reduced. – And the best thing, we will add new deals daily until 8th April. Shop the Easter Sale here: https://www.sportsshoes.com/products/…

With our new April discount code you will save event more! The new code for the month of April is PCR5 - valid until 1st May 2018.

PUB RUN – SHERBORNE (29th March 2018) First things first. Before I could leave for the Pub Run tonight I had to go out and photograph a Sparrow Hawk sitting on next doors roof. Right up until I reached the pub I was still deciding whether or not to include some off-road, considering all the rain we had had today. In the end the off-road was included. We ran through Sherborne past the Abbey out to Long Street. We turned and started an ascent going up St Swithin’s Street, North Road, Wootton Grove, and Simons Road. We passed the old quarry and continued the ascent going up Quarr Lane. We were out in the sticks at this point. At the end of this muddy track we reached Sandford Orcas road, and ran up to Ambrose Hill. We turned left and continued the ascent up Coombe lane which was the second muddy track. Further on there were strong farm yard smells. We crossed the Marston road and continued off-road (Checcombe lane, and left down Trent Path Lane). We took a left turn along a very wet and muddy track to the kennels. The old lane took us back into the town. We ran down Acreman Street, and took the paths to Horsecastles Lane and the pub. It was 6.5 miles with well over 500 feet of climb. It felt good to be off-road again in daylight although it was dim.