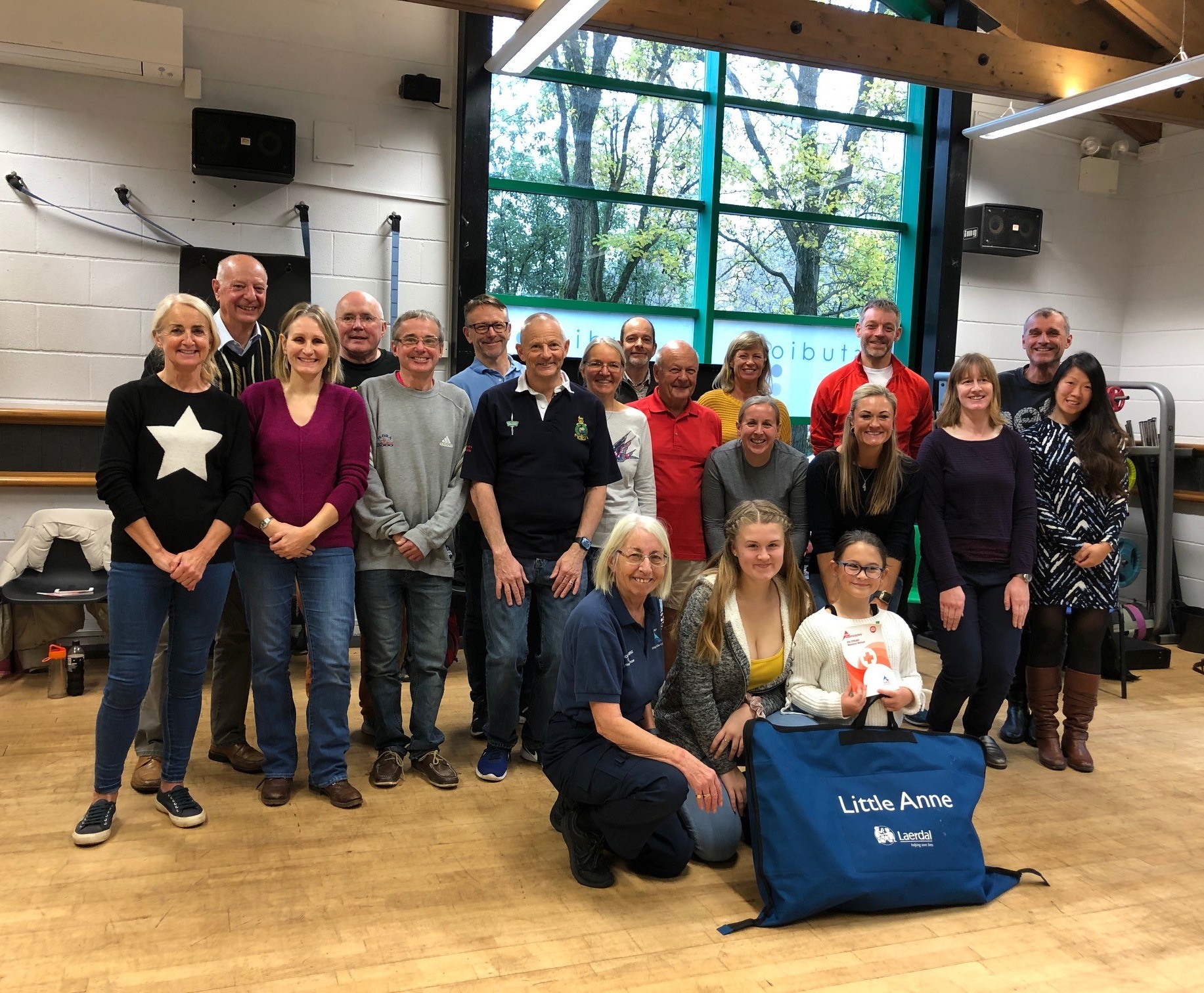 As you will be aware the Club purchased a Defib last month and so it was decided to try to run a  training course, thanks to Sarah Cherry and her Mum, Lynne who just happens to be a First Aid Trainer. A date was decided and thanks to Liz Diamond we had this at Goldenstones today. There was a great turn out and at 9:00 the training began. 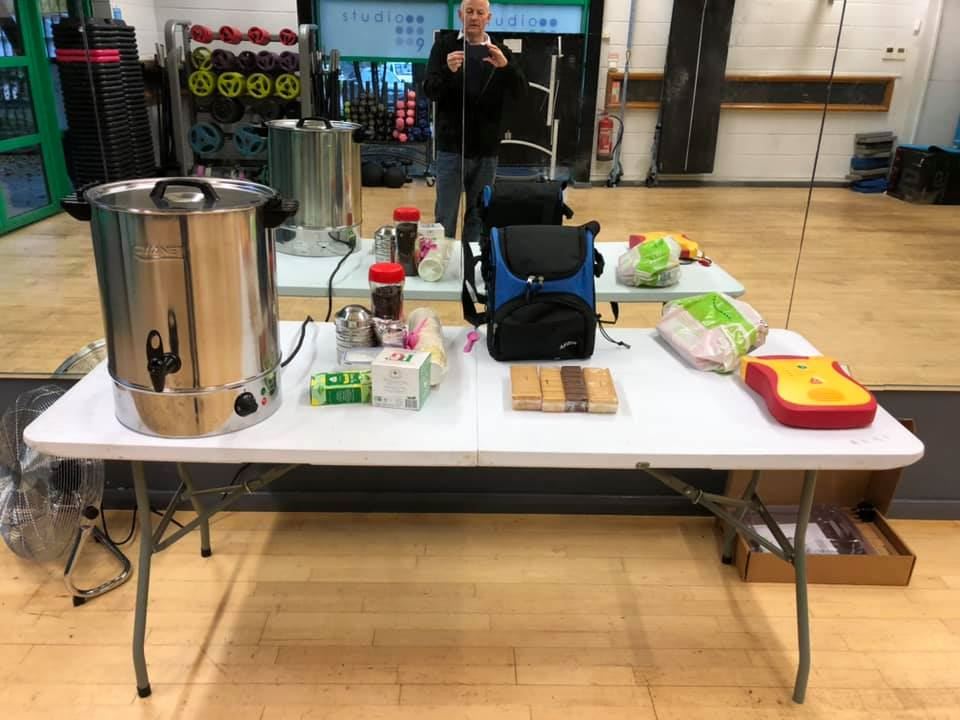 Today's training started with the Primary Survey followed by Cardiopulmonary resuscitation (CPR) and finished with Automated External Defibrillators (AED). The CPR was conducted on Anne. bless her she had a lot to put up with. 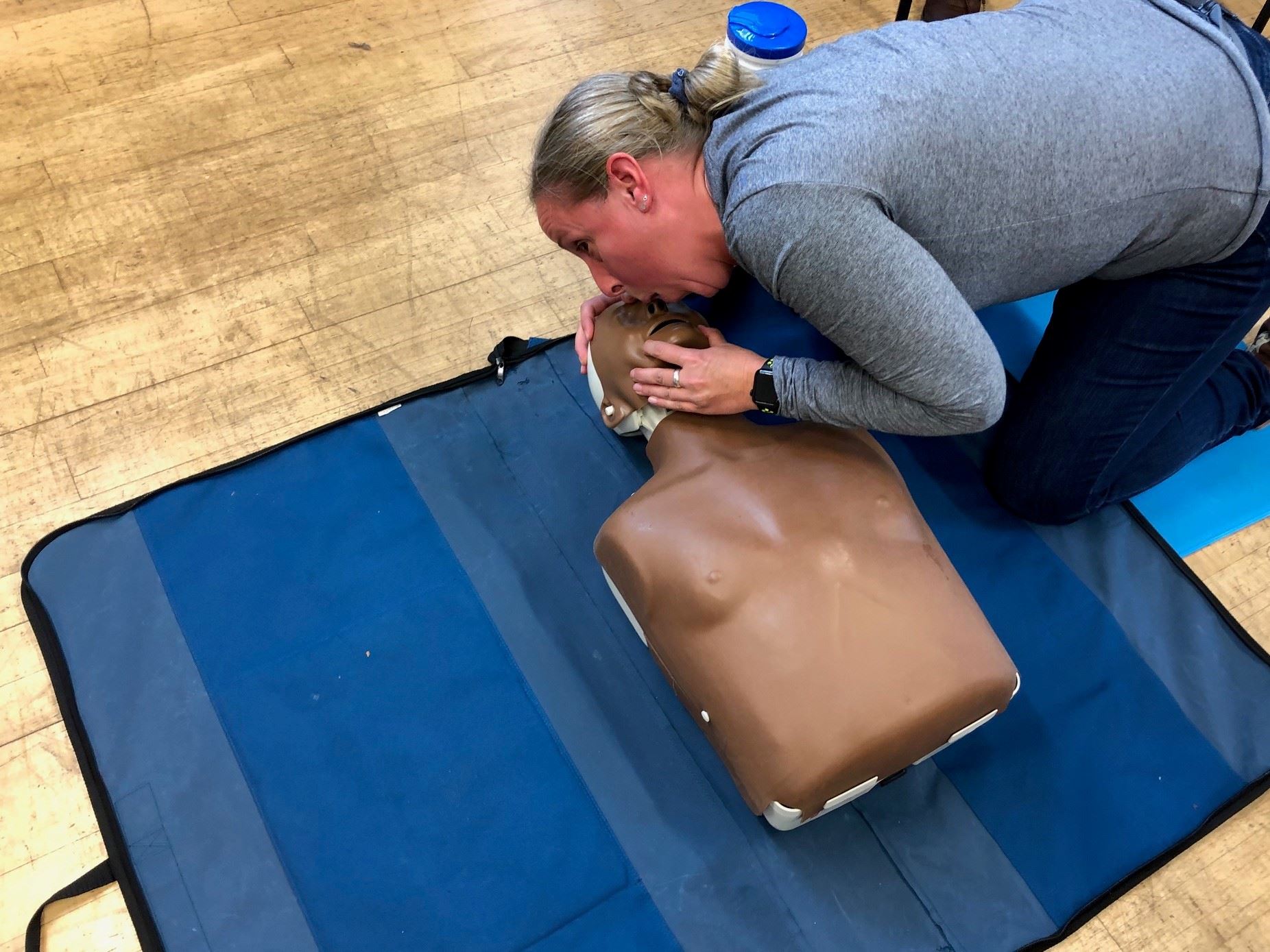 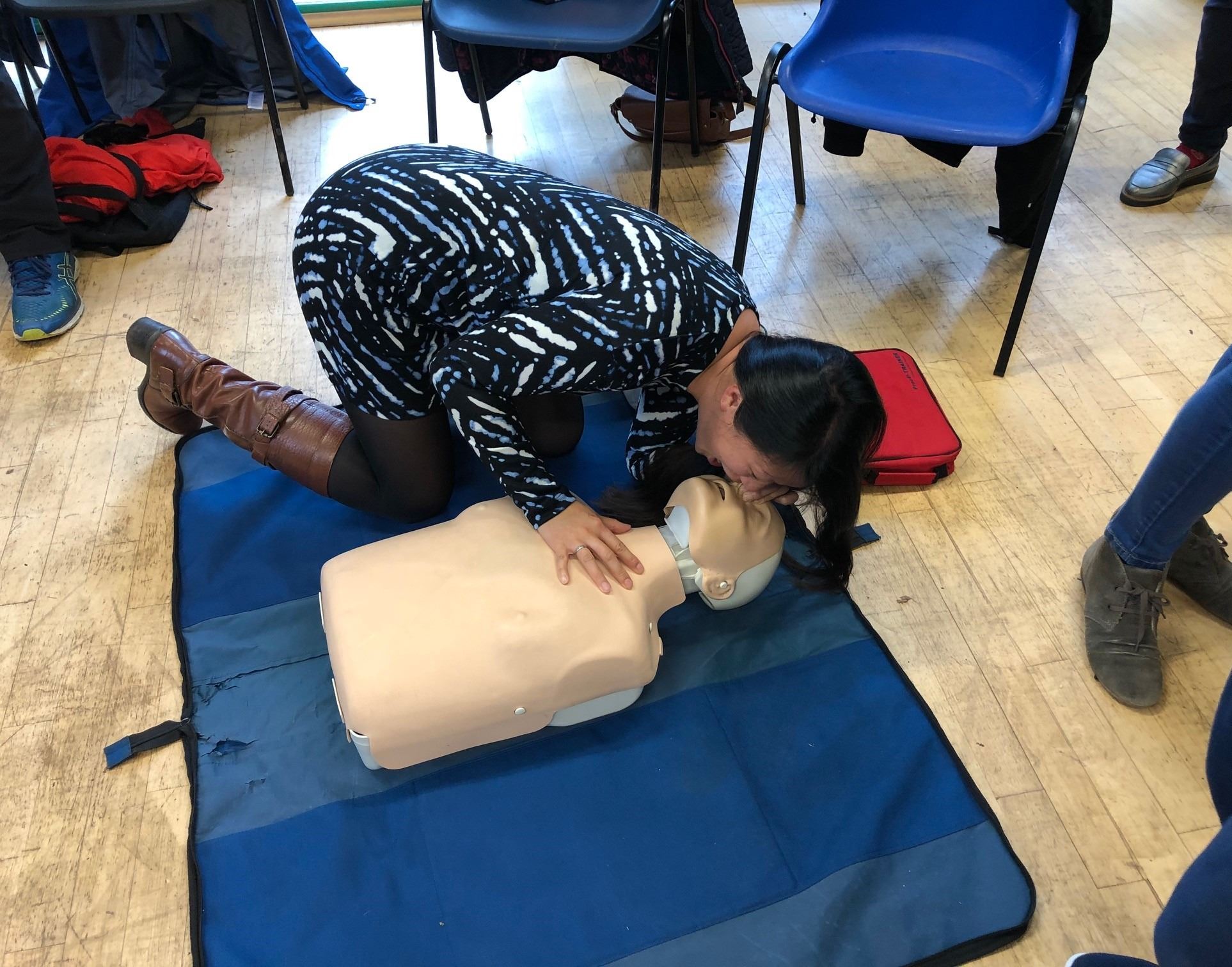 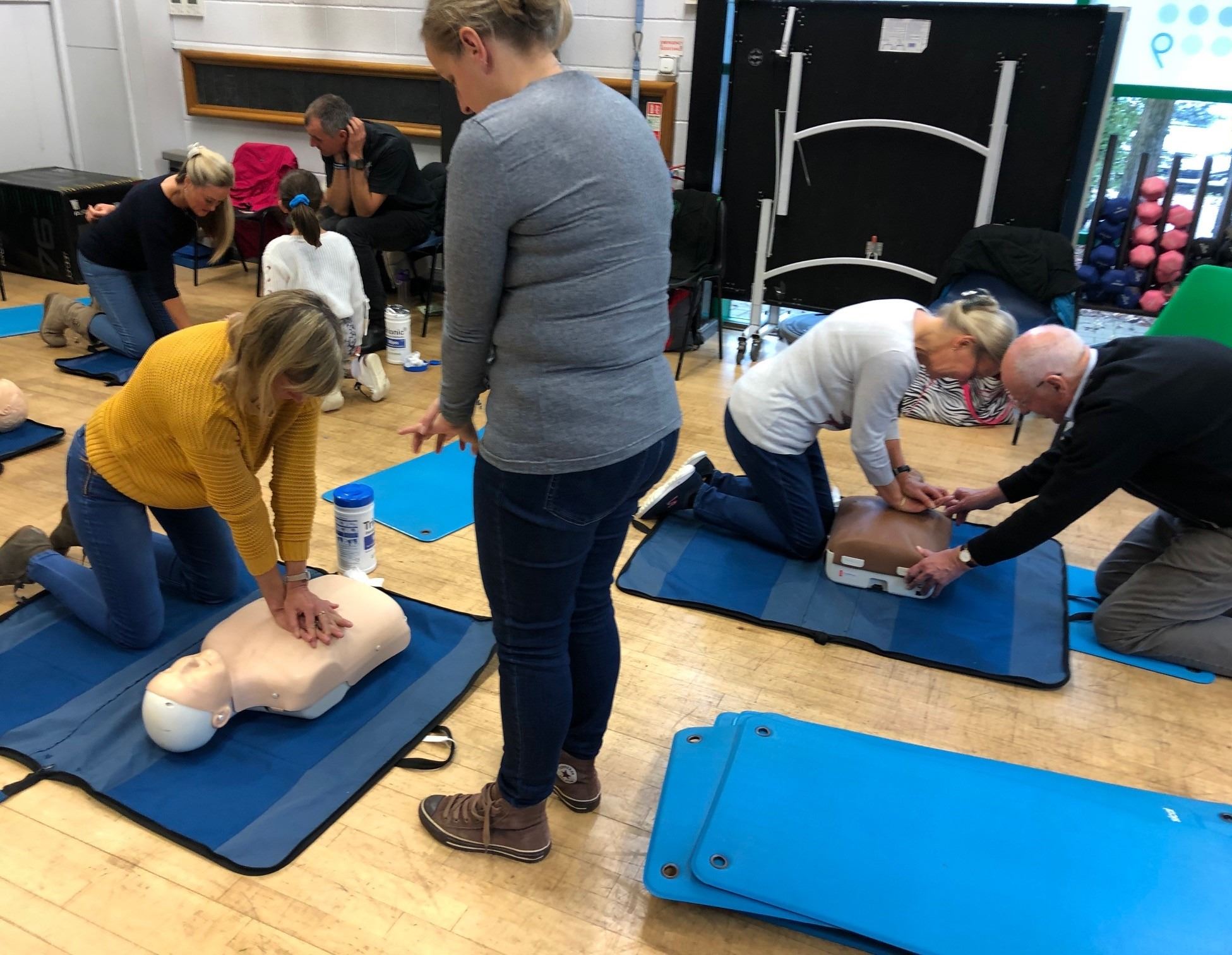 The final part was on the AED with us all having a go on Training AED's and how easy they are to use. With 19 on the training and 16 club members the Club can run easy knowing we have some first aider's in different run groups. Thanks to all that turned up and hope you all learn't or refreshed you on this. It is hoped to run another course next year and maybe a First Aid Course as well.

Run from the Romans lll

From Anita: On a cold misty night there was a call to runners to go up to the Ancient Hill Fort on Ham Hill. To Run from the Romans III.
There we found a newly erected village of tents and shelters filled with lights and an assortment of other folk who had answered the call.
We were separated into the slightly mad (5 mile runners) and the definitely mad (10 mile runners) and diligently listened to the instructions and safety brief delivered by a rabbit with fluffy flashing ears.
Then we were off ... slipping and sliding up tracks, hills, through fields, muddy puddles and rather a lot of mud. There were some brave souls out in the dark making sure that we didn't go adrift or fall off of the hill fort ramparts.
The slightly mad runners did one lap and the defo nutters did two, double the fun. We would have been rewarded with fabulous views of teh countryside, however it was very dark and then the mist came in, making it even more challenging.
But hooray no injuries and no terrible mishaps noted we were able to claim our hard earned medal and what a prize it is!
Well done all those who braved the mud to run and many thanks to those who stood around marshalling and helping.
I as the sweeper for the 10miler was the last one over the line in an all time Personal worse time but had a fabulous time. 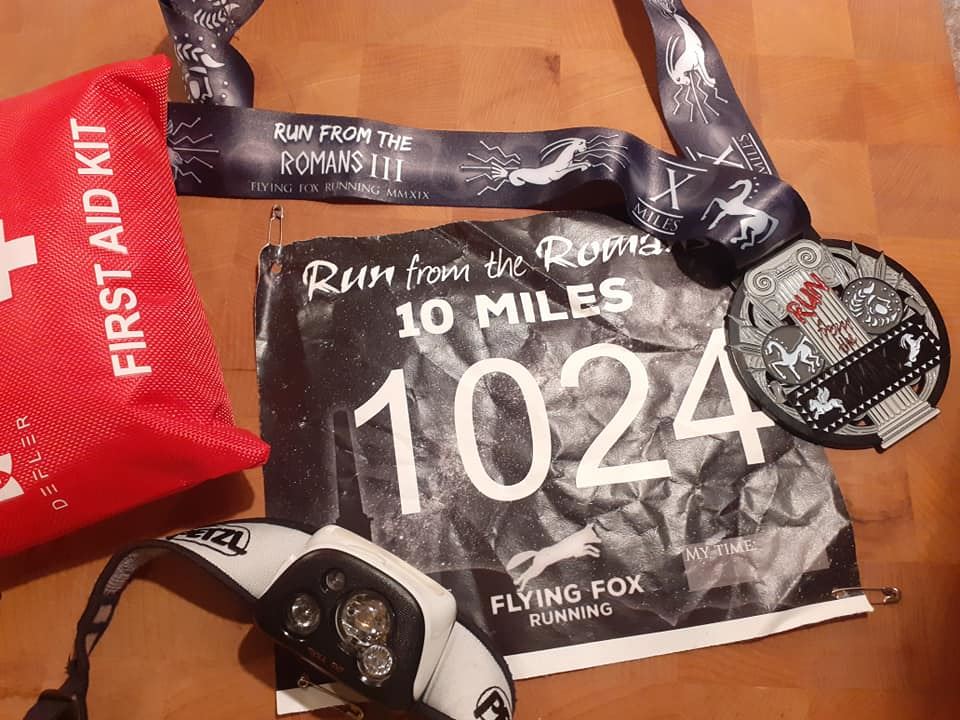 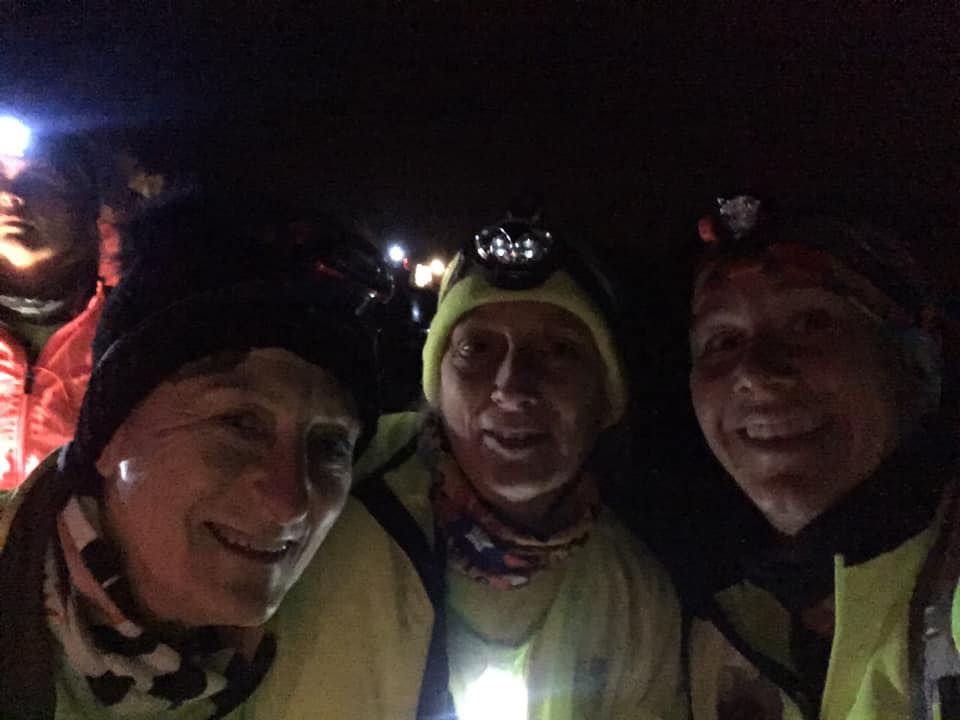 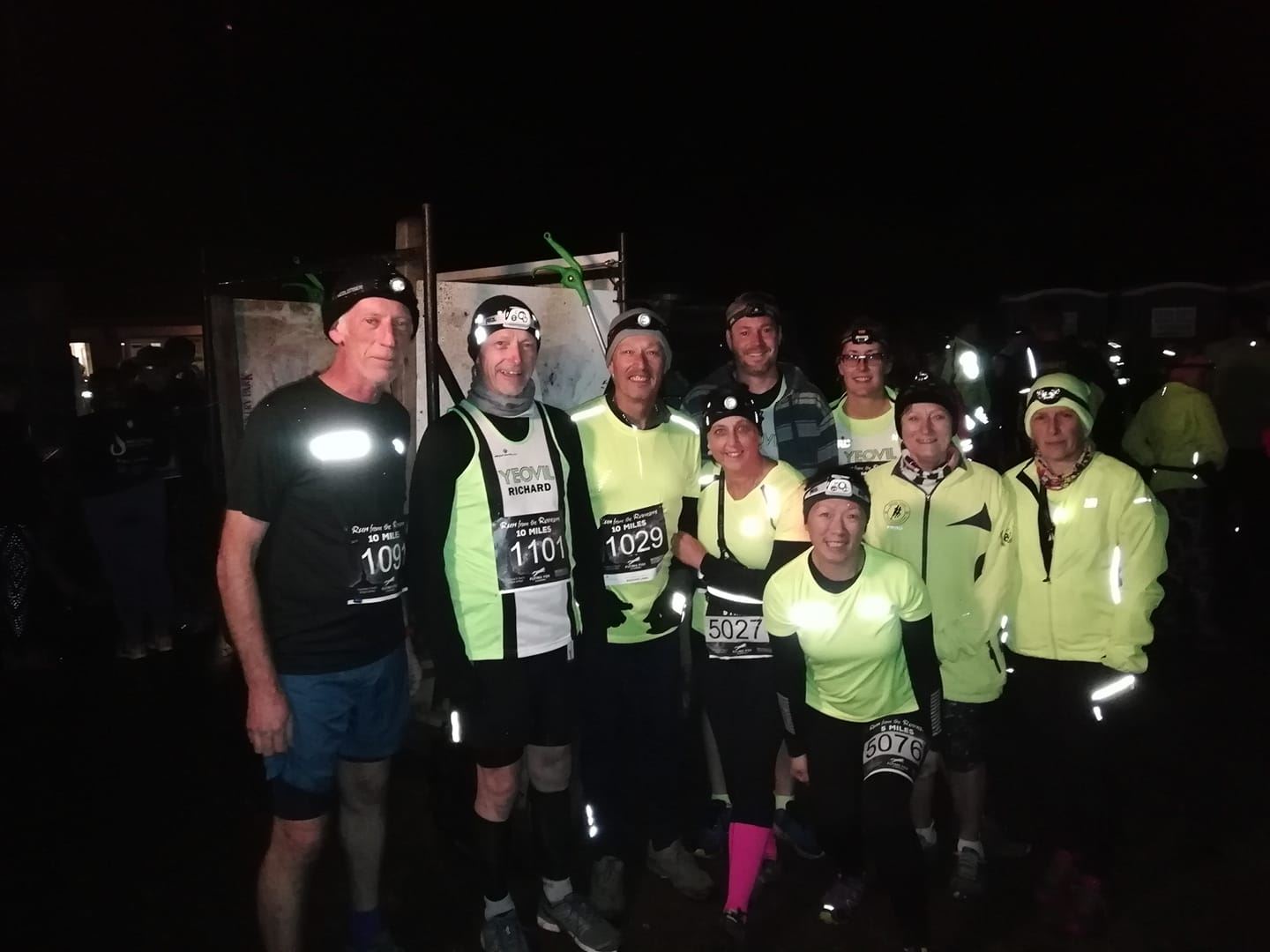 This is taking place next Friday 29th Nov, please arrive on time, Anita has spent a long time on arranging this and the Table Plans a long with the Menu's and Lesley getting all the Hats and prizes for the Points and Championship. It will be a great night for a great Club.

From Dave: Chilly Duathlon today Just Myself, Elizabeth Diamond & Kevin Stenner representing the club Knocked a couple of minutes of my time from when I did this in February. Great event thoroughly recommend it, if you fancy trying a multisport event ! 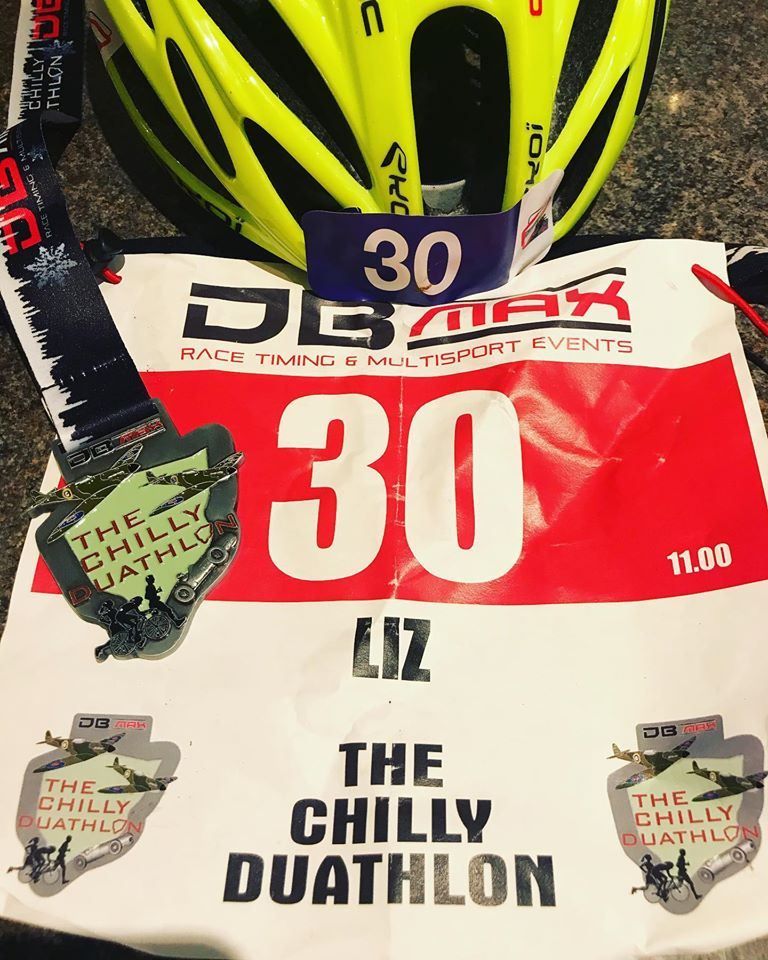 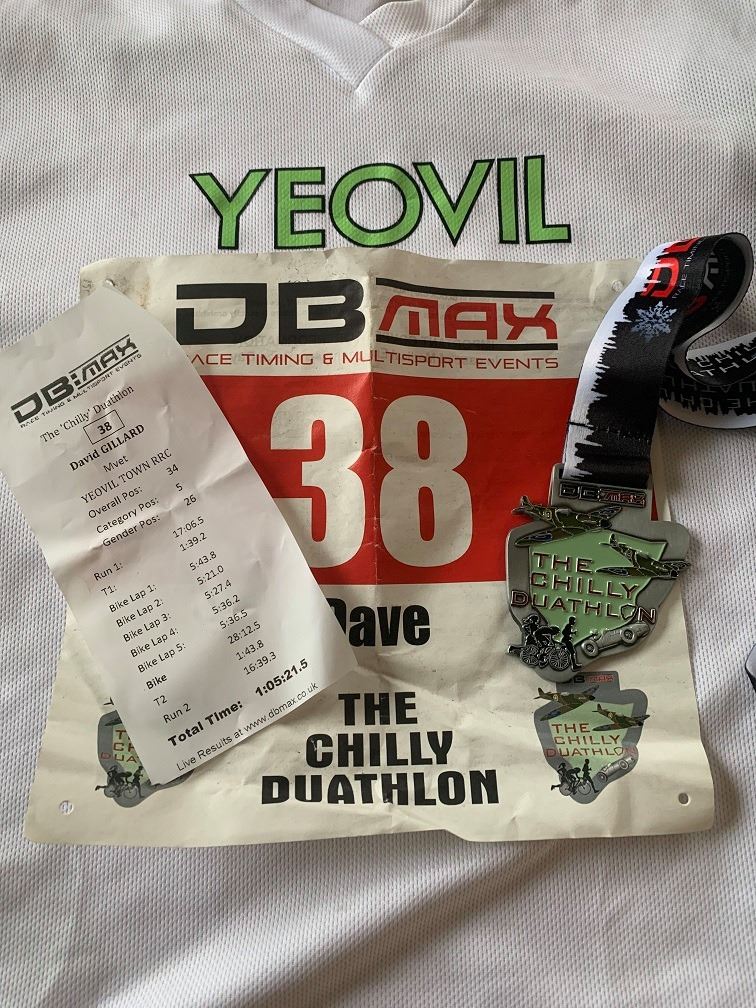 From Angela Claire: Come to Brent Knoll, it'll be fun, it's a bit hilly though! Well hilly doesn't quite describe it, an almost vertical climb through mud would be more accurate. Anyway, four of us set off for Burnham on Sea for this very hilly and very muddy trail race. It was the last of the Somerset series so for Shaun Powell Els Fontana and Linda Membury there was a small matter of some t shirts for them to collect, another one for Linda's blanket. For Dobby it was her first race since the beginning of the year although as she reminded the others it was more a case of completing not competing. Linda was rather hungover, we had to stop en route for her to catch some fresh air and Els was surviving on adrenaline after not a lot of sleep the night before. With Linda feeling rather ill and Dobby puffing on her inhaler at the start we looked a really healthy bunch! After a short race briefing we were off. Shaun and Els lead the Yeovil contingent followed by Linda then Angela. Out from the rugby club we followed a track until we reached the first almost vertical climb, some were on hands and knees at this point as it was so steep and slippy. Hill one done and it was then up to the second climb up to Brent knoll where we were rewarded with fabulous views through the mist. What goes up must go down though so it was then a case of sliding down the hill and then back to the rugby club. Shaun was first Yeovil man home followed by Els, Linda then me. We picked up the clock and headed for the sea front for hot chocolate and chips! 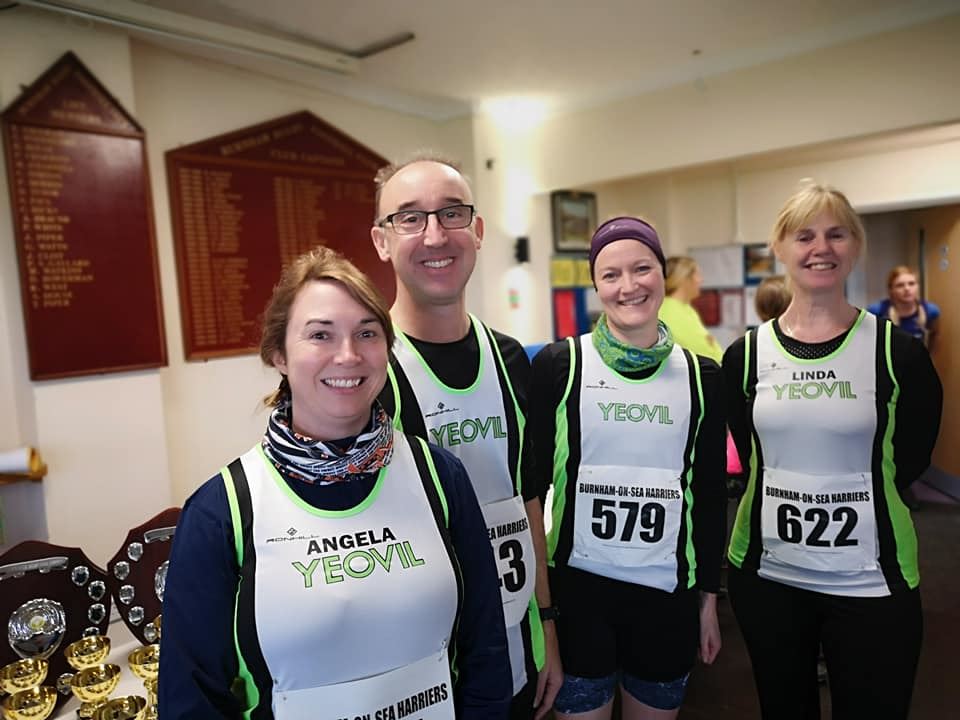 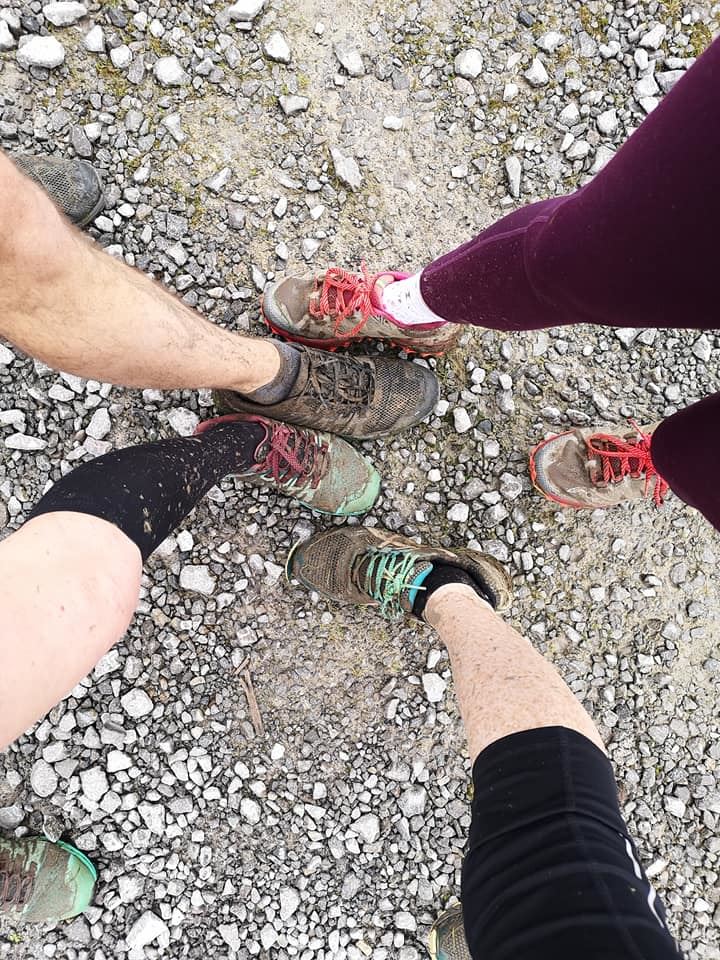 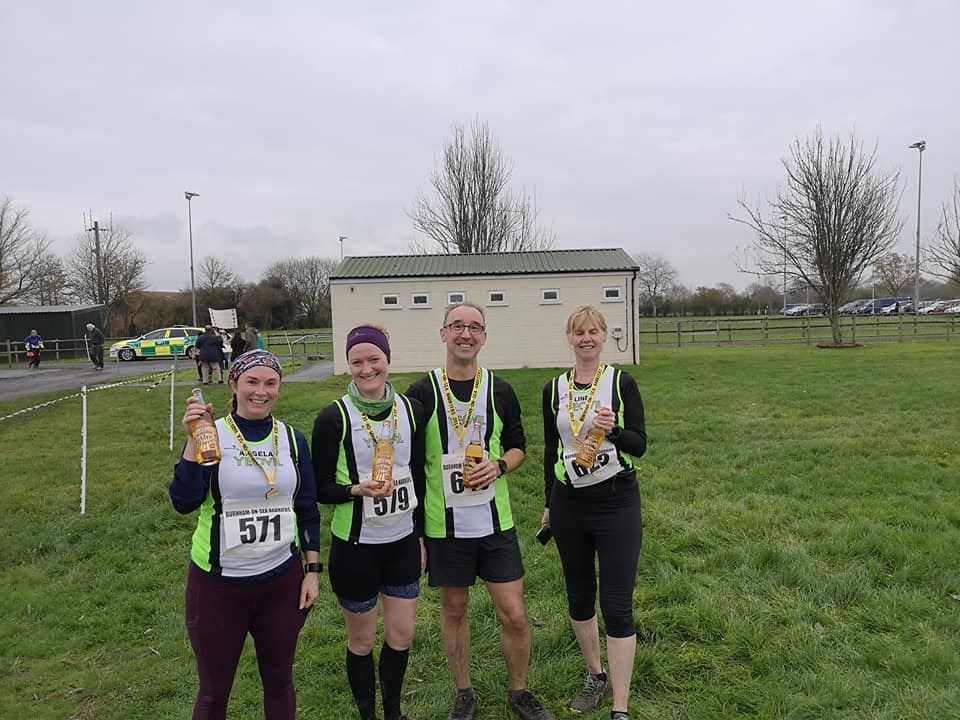 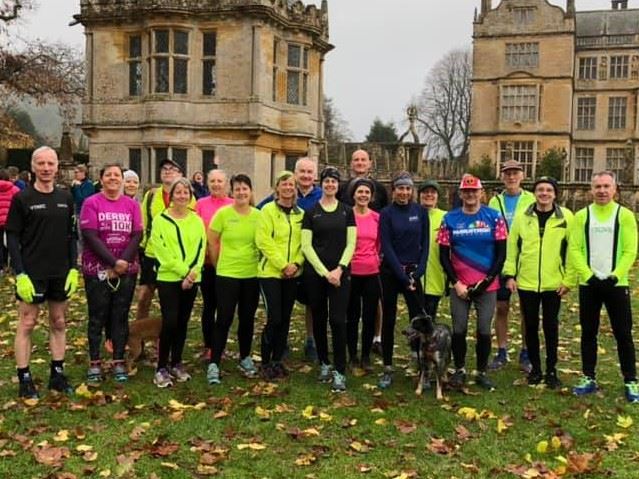 From Dave: Southampton parkrun done and now Deb and I are in the The Cowell Club with 💯 different parkruns 🙂 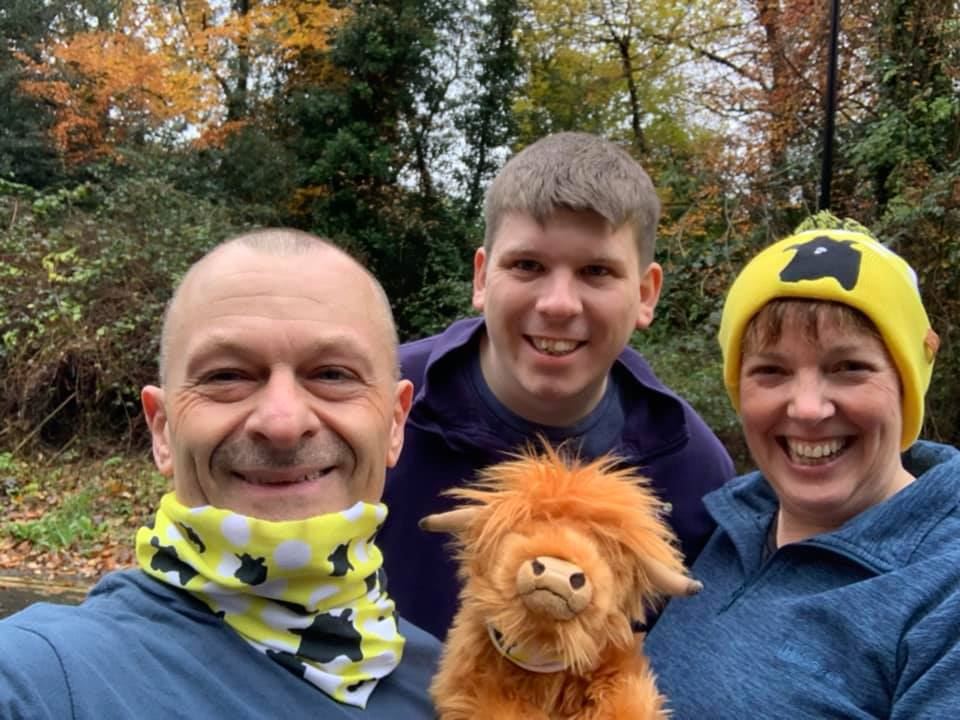 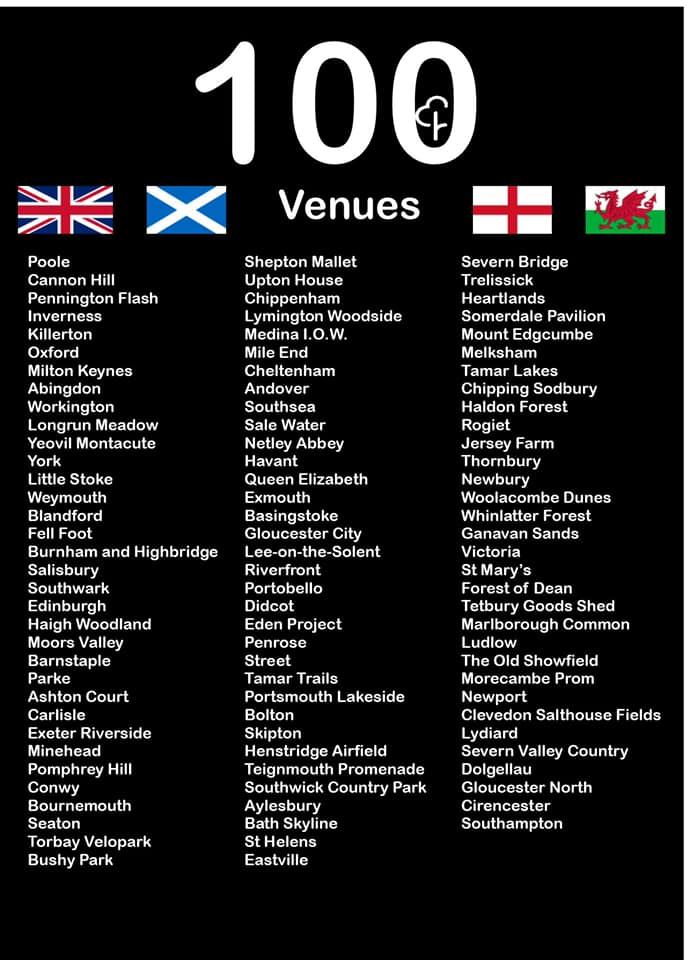 On a rainy wintery night we went out to Ash for the Pub Run, and it didn’t disappoint, it rained. I had a backup plan but never got round to measuring the distance. In my group the runners were Louise, Els, Zoe, Tim, J.C. Tony and I. After the photoshoot outside of the pub we ran off, south westwards down the lane towards Martock. We passed the church and ran out towards Bower Hinton. Turning right we ran out towards South Petherton passing the Parrett Works. Another right turn took us up a narrow muddy lane to East Lambrook. At the end, in the middle of the village we turned right. The drizzle intensified as we continued to Gawbridge Mill, Coat, and the traffic lights. Visibility was poor so there are no comments on the scenery. Bells ringing from Ash church were loud and served well to navigate us up the hill back into Ash in the wet darkness. It was a surprising 7.4 miles, and we ran it quite quickly in poor conditions. Thanks all, and thanks again Phil for organising. Alison provided the photography. 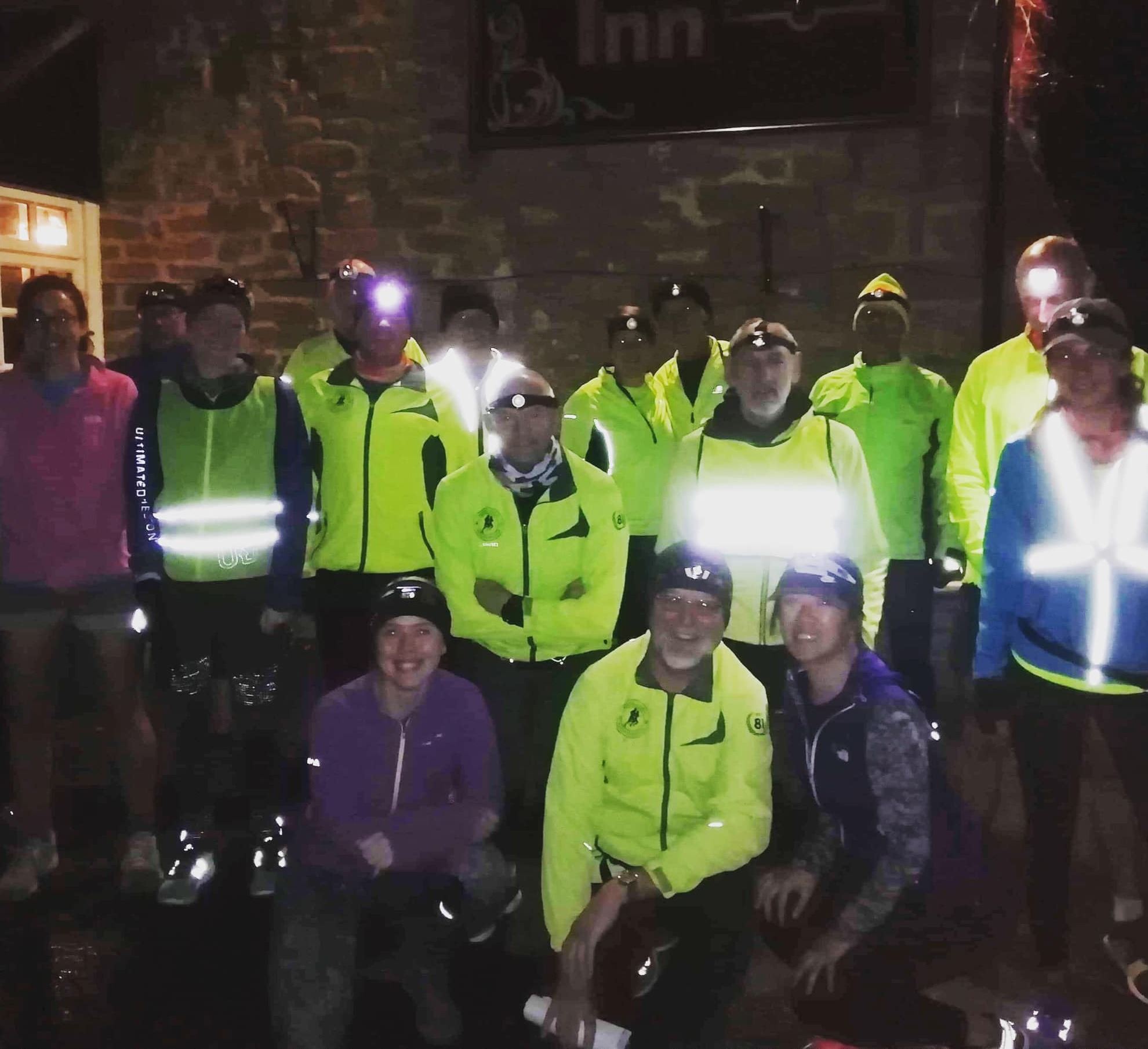