Back to Racing, Stains, Bridgewater & Warminster 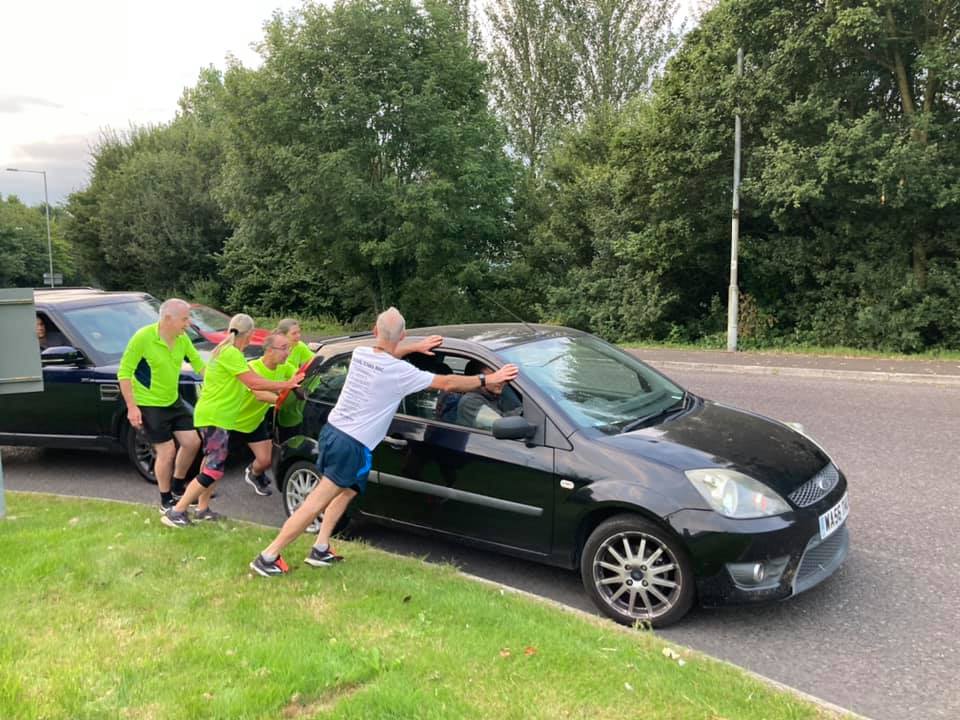 From Andy: Nice day for a 10K at Warminster Carnival Chase 10k. Judith and I were the only two YTRRC flying the club colours among a sea of yellow Avon Vale shirts. Perfect running weather great company, and a well signed picturesque route. Judith came in at 1.03 and I was 9 mins behind. Big thanks to Jen Buckle from Avon Vale for the company in the final few kms. 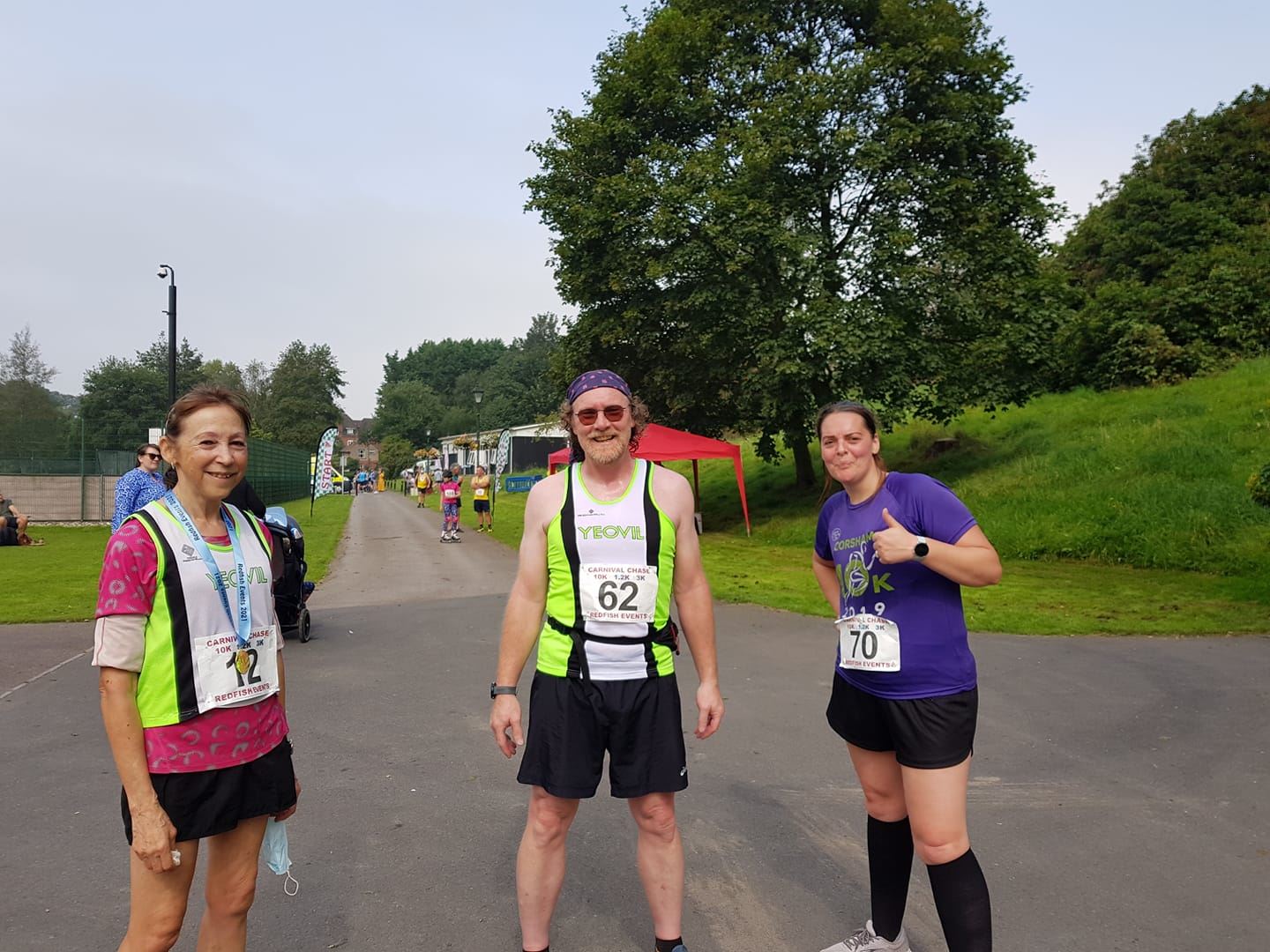 Every year the 100 Club have an AGM and always have a marathon in the morning followed by the AGM, normally a different venue each year. This year it was with Saturn Running in Stains with 6 laps up and down the Tow Path. We had four Club members running, Lynne, Mark, JC and I, with an 08:00 start in was an early start for the boring trip up the A303 and M3 but at least the boys made it on time.... It was great to see some faces that we have not seen since lockdown. Off we went and headed for our first lap, it was my first time at this venue " The Thames Brewery " and there are some right posh Drums (houses) on the other side of the Thames.

Even though there are some nice views it does get to you doing multi laps, good side is I managed to get Lynne twice with a "Come on Yeovil" and see Mark, who has a great run, every lap. The weather was cloudy but the Sun did come out towards the end and on my last lap on the way out I passed an Ice cream Van and noticed the Apple Pay sign so on the way back I got a 99 paid by phone and jogged on eating the 99, it was over mile 24 so only 2 two go. A few others also cracked and got one as well, you don't see that at London. Also running was Rhino Man, a few may have or will have heard of him as he has done the London Marathon a few times and runners do get annoyed when a Rhino over takes them, I think he said 4:10 was his fastest London dressed like that. At the finish there was a band playing from the top of a Barge and Mark, JC and I sat with a Pint in the Sun, a great way to end a marathon. 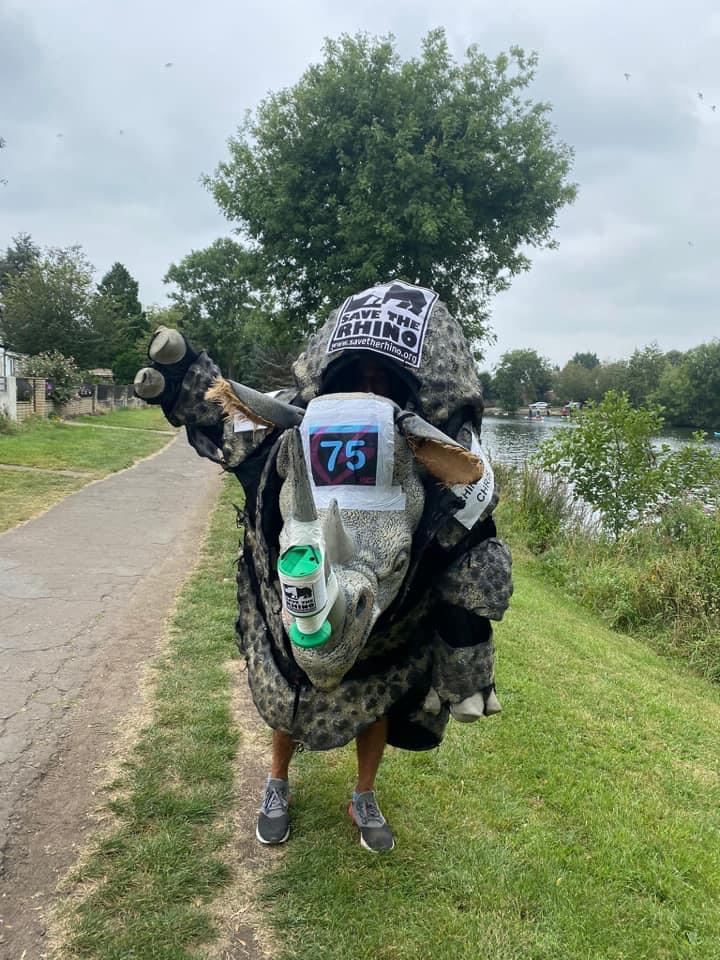 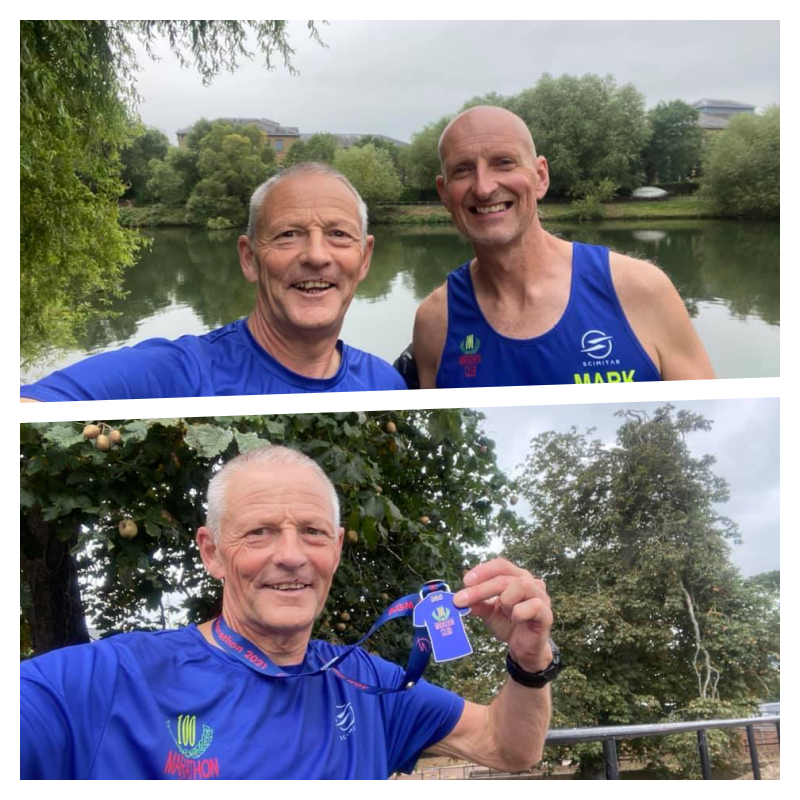 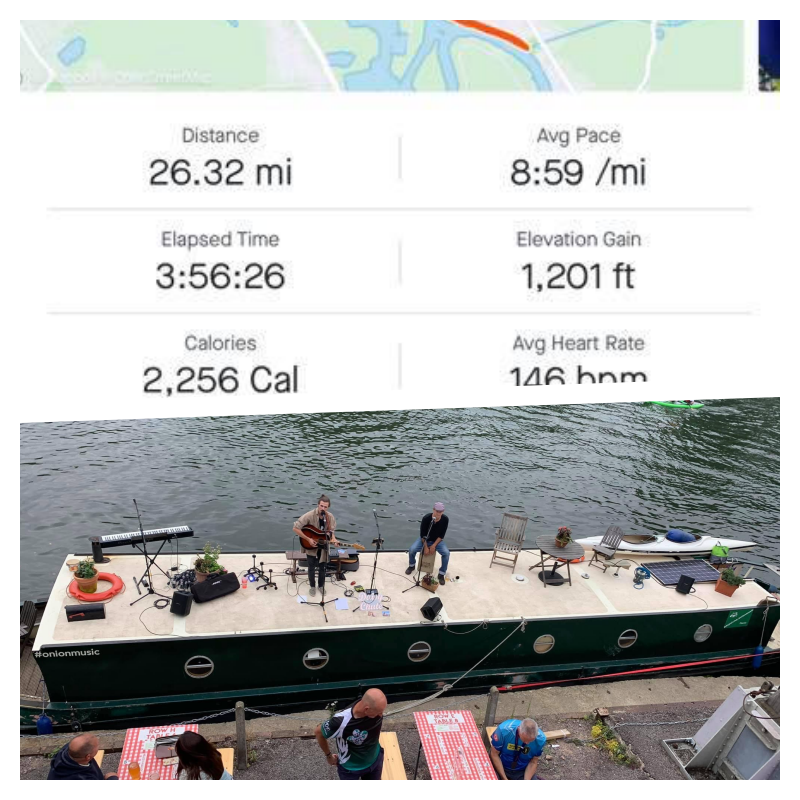 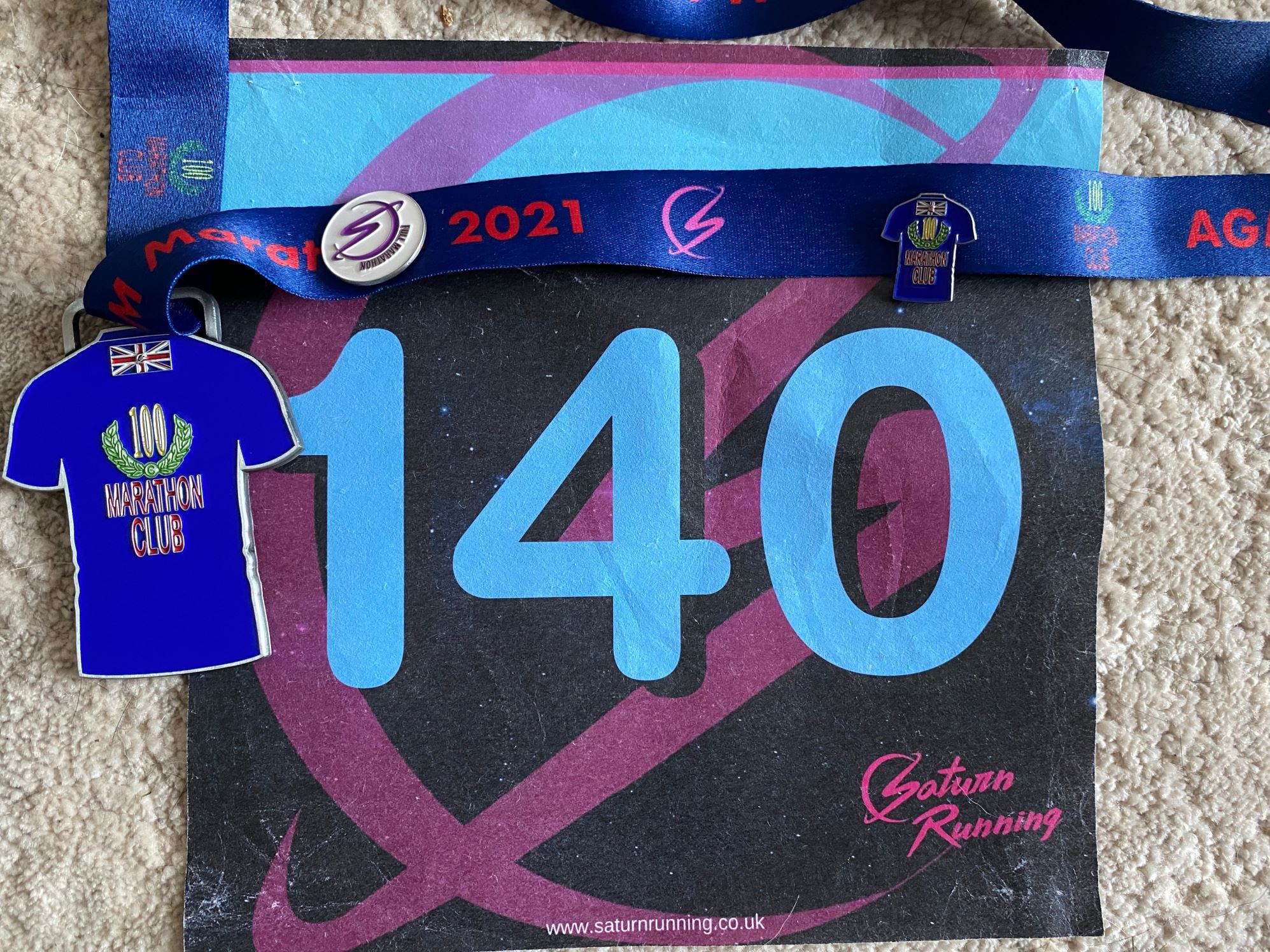 Well done to Jo and Linda on the Bridgewater Half. 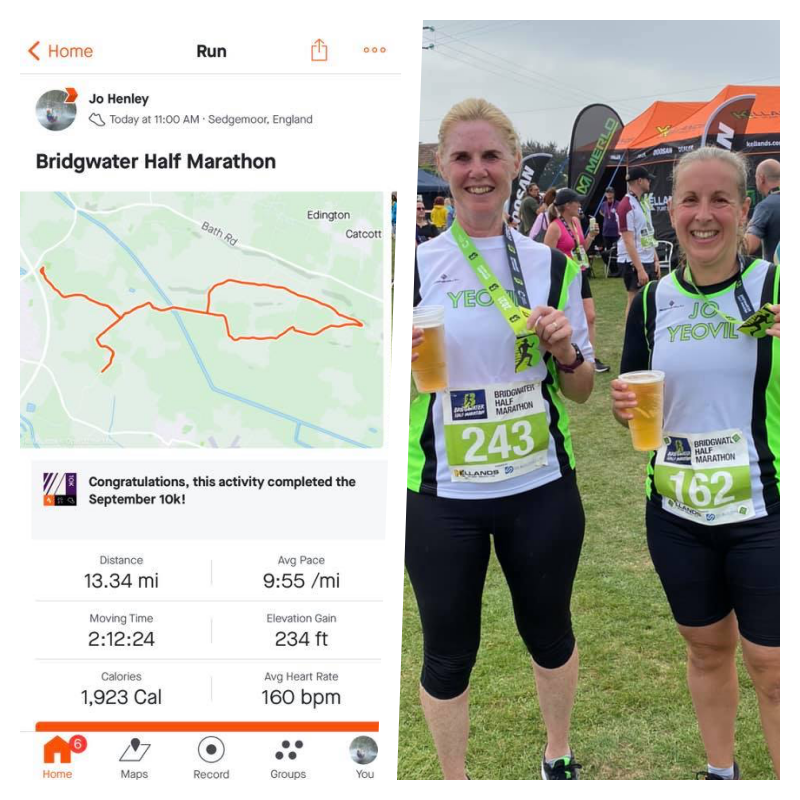 Multl-terrain route over country lanes, tracks, fields and droves. Medals for all finishers plus award for first male and female teams [4 to count] £14 in advance - £2 extra on the day

From Brian: On Tuesday evening last week I began my virtual South west coast path and so far i have completed about 30 miles please could you mention this in the blog also yesterday I did a half marathon charity walk along the Dorset coast.

From Donna:  Wow congratulations this week goes to Louise Ward who has finished, I believe Louise did all her 630 miles running although we are allowed to use walking miles, well done Louise

And we have some others who have a few more miles to go yet, keep going you are doing well!!

No the Park Run.

From Diane: What a beautiful run this morning. A not a Park Run with the ever nimble Lesley, super host Charles, excellent rambler Richard and Kev!!!!! Well how can I describe Kev? Super star litter picker, brilliant run organiser and laminator and raconteur to rival Jackanory (for those of us, who are mature enough to remember this simple pleasure ).

It’s my fave way to run. Super company and excellent conversation to include conspiracy theories and the meaning of life, the universe and everything Loved it. Thank you lovely friends. I’ve stolen some photos from Kev It was also my contribution to the Guinness Book of Records virtual participation in as many folk running a 5k as possible

Happy weekends to you all 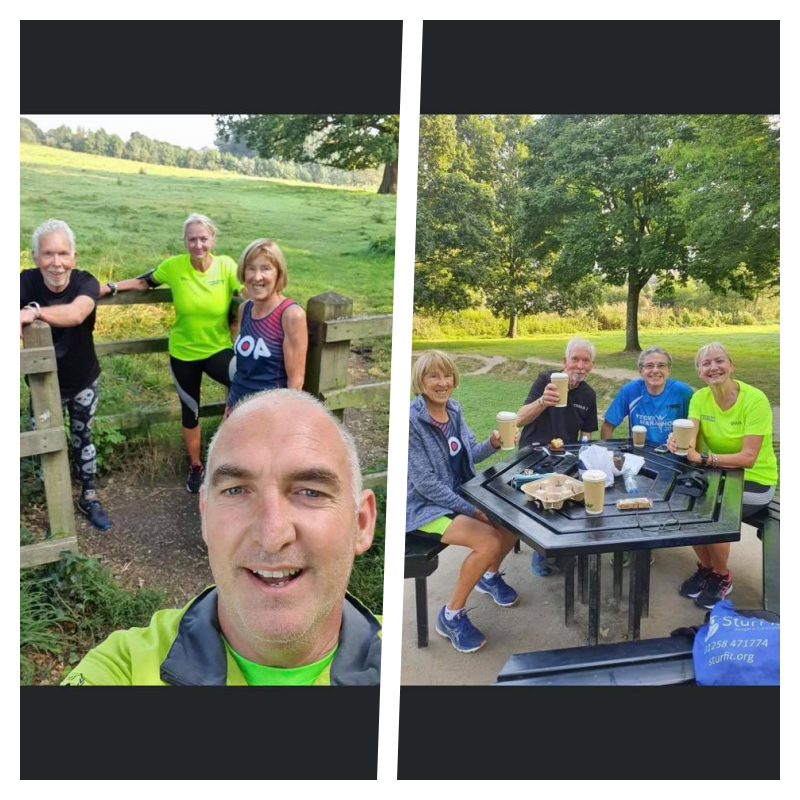 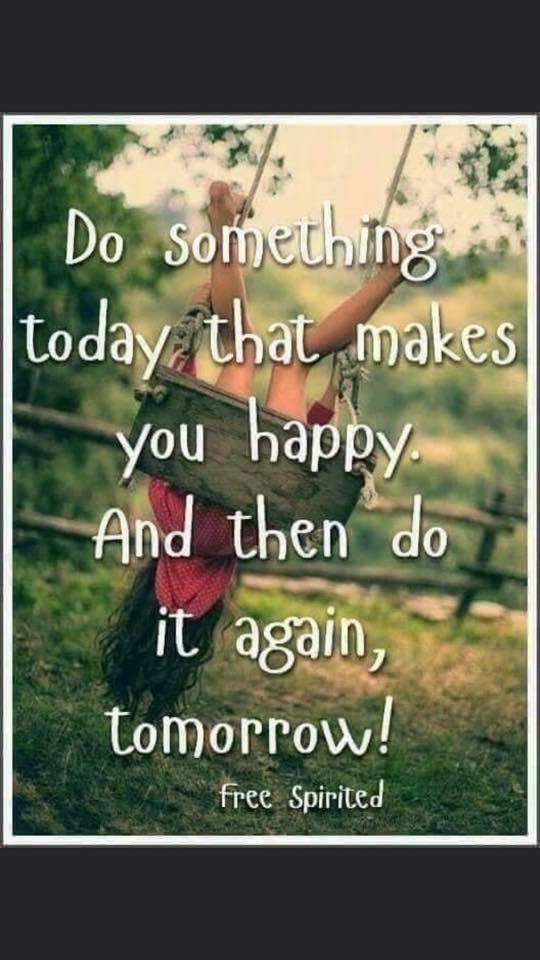 From Linda: Enjoyed my Parkrun at Henstridge today. Got in under 30 minutes. Not so many YTRRC runners today as a few don't like this course. I really like it! 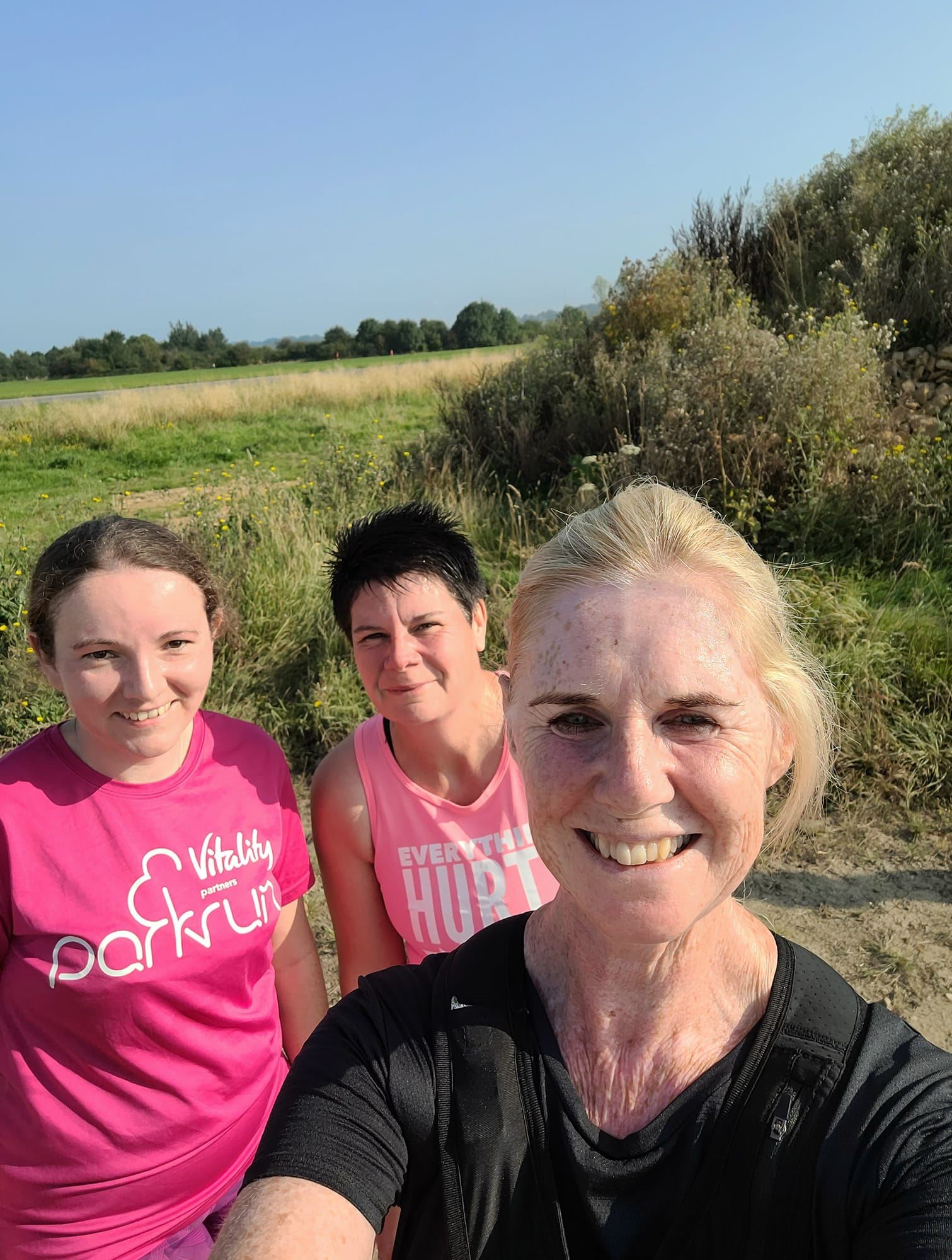 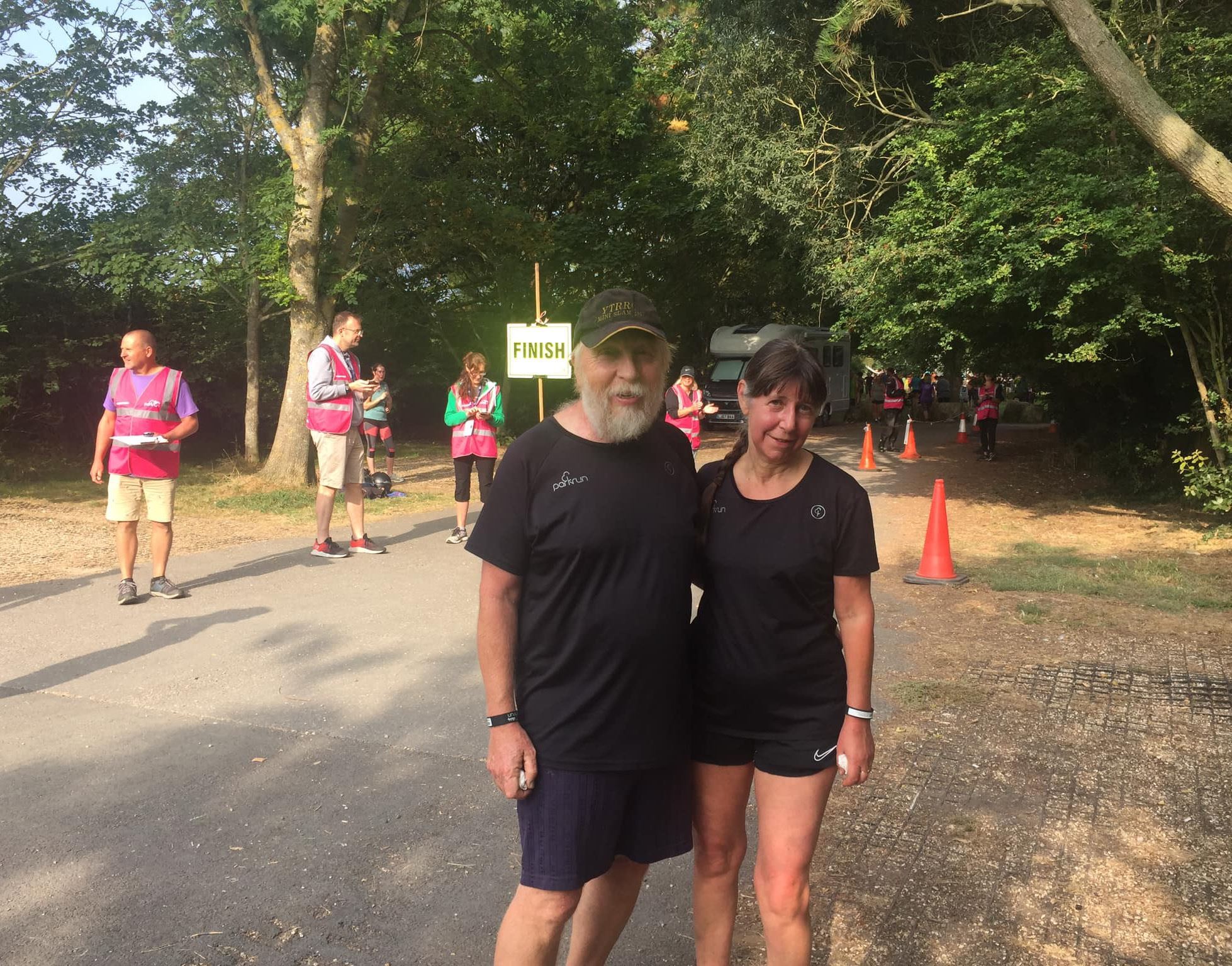 From Mark: For a change I planned a route going westward to Merriott. Four of us (Rob, JC, Nick, and myself) ran up the road from the pub and took the right fork. We climbed then reached the A356. We ran up the main road for a short way then turned left and ran the lane into Merriott. We ran an anti-clockwise loop round the village, and returned the way we came. Returning to West Chinnock we took the right fork and climbed steeply. At the bottom of East Lane we turned left and ran through Middle Chinnock crossing Poop Hill Bridge (it is really called that). Two further left turns brought us back to the pub. There were two other groups and Phil out running alone as well. Running round Merriott felt like a trip to the past with the village feeling mostly unchanged from years ago. Great pub and food as well. 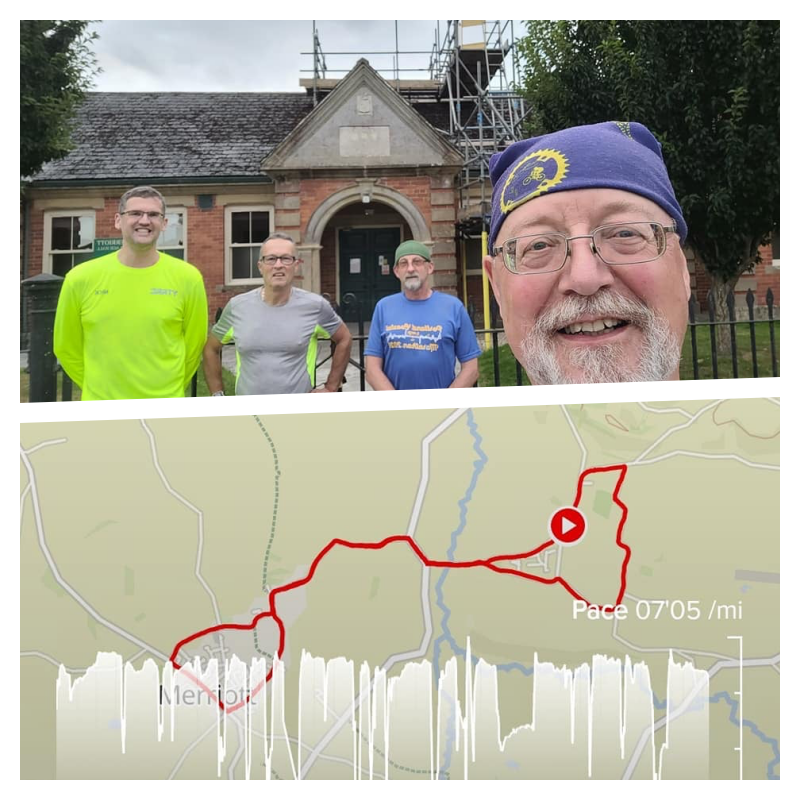 From Angela: Yesterday I did the jurassic coast challenge with macmillan mighty hikes. I think there were some runners there as well, definitely the winner of the half was running! Anyway, we walked the course which included some very steep inclines and descents, particularly in the first half! A great day out and one I'd definitely do again. We were well catered for too, aid station at 5 miles with loads of free snacks and drinks, lunch stop half way, a further water station and final aid station at 20 miles with more free snacks and drinks. We were then rewarded at the end with a glass of prosecco (very welcome) and a free dinner which was very gratefully received. A well organised event with runners /walkers being set off in waves with 5 second starts in each wave. Legs feeling not too bad today either after all those hills! 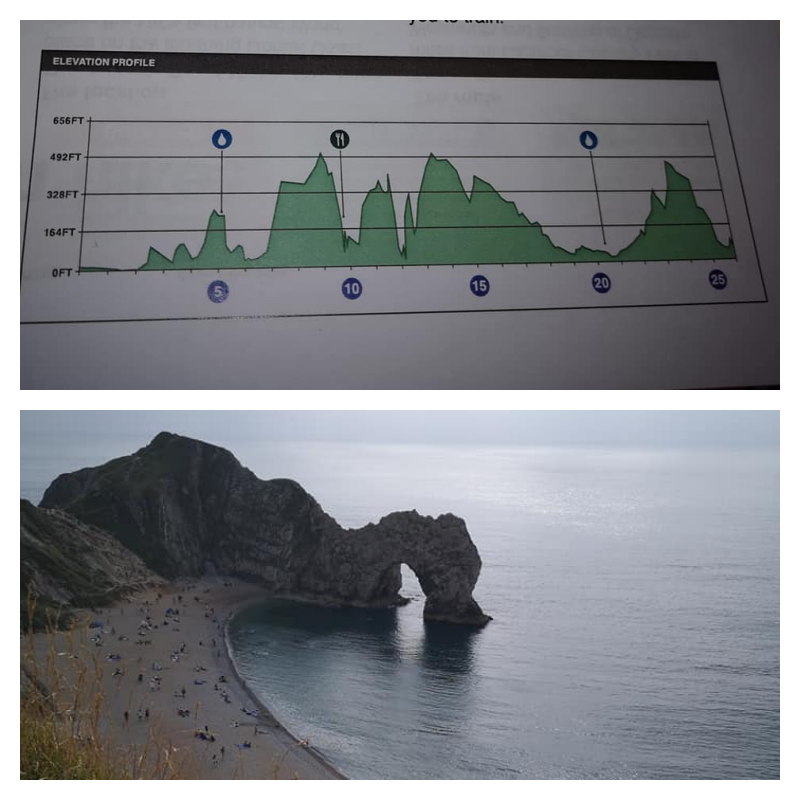 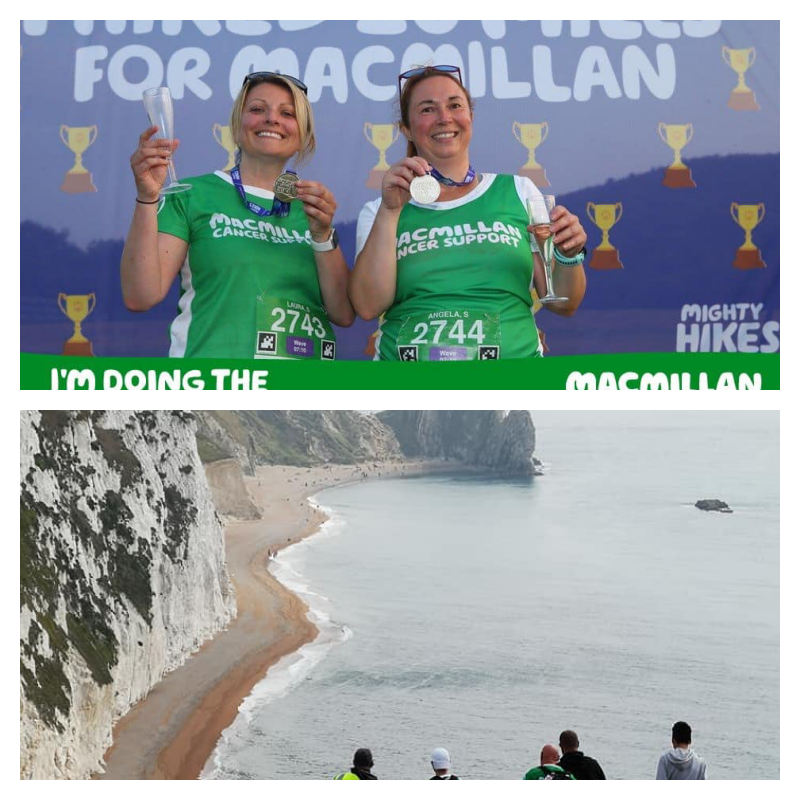