At Last No Rain 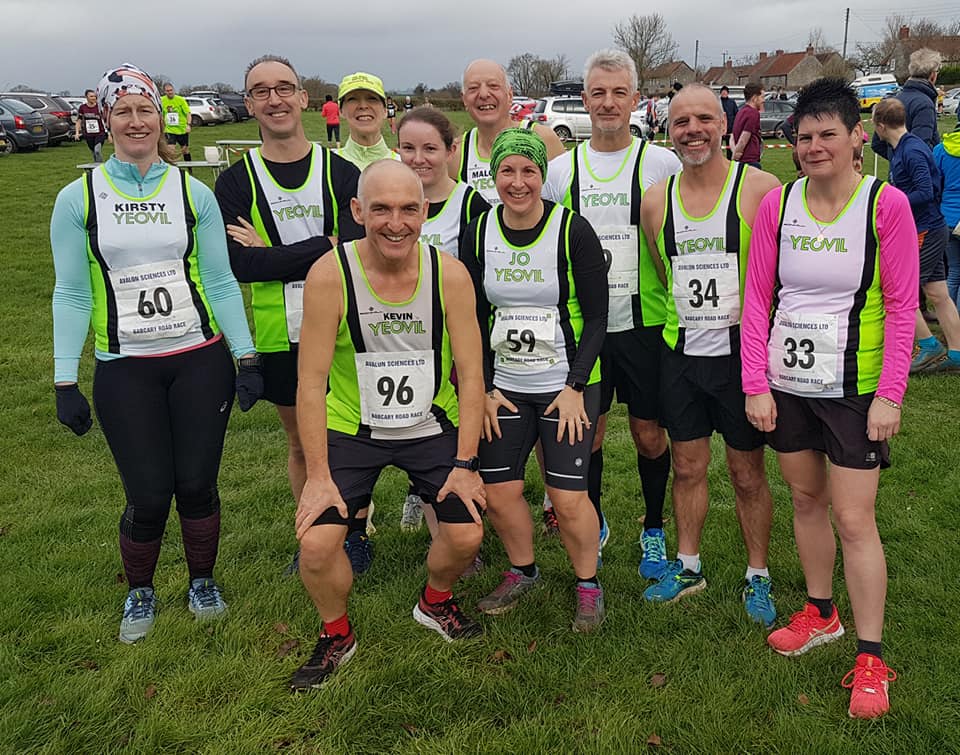 Saturday saw the AGM Marathon at Walton on Thames and the BBB route which meant  8 out and backs. It was open to anyone and not just the 100 Marathon Club and from YTRRC there was Kev Brettle, Mark Pike,  Me, JC, Lynne and Anita Rufus. The Race Director has a new location as race HQ with Showers and a large area for Number Collections and chance to buy Tea / Coffee. The Route was muddy in places and a bit windy on the lap out, the Thames was very close to flooding but with no rain it never did. The good thing about out and backs is that you get to see everyone 8 times and can even come up behind them and shout out "Come on Yeovil".  Of course on out and backs it's worth keeping your eyes on the Sign that say's "Turn Around Here" and not carry on wondering why there are no runners....Who could that be....Don't worry Kev I will not tell anyone. Mark was first to finish for the Club and Anita and Lynne came over together. During the Race there were some mile stones with one doing their 100th, one doing 300th  and Steve Edwards 900th, an outstanding achievement.

The medal may not be big in today's standard but it is well made and a good design. 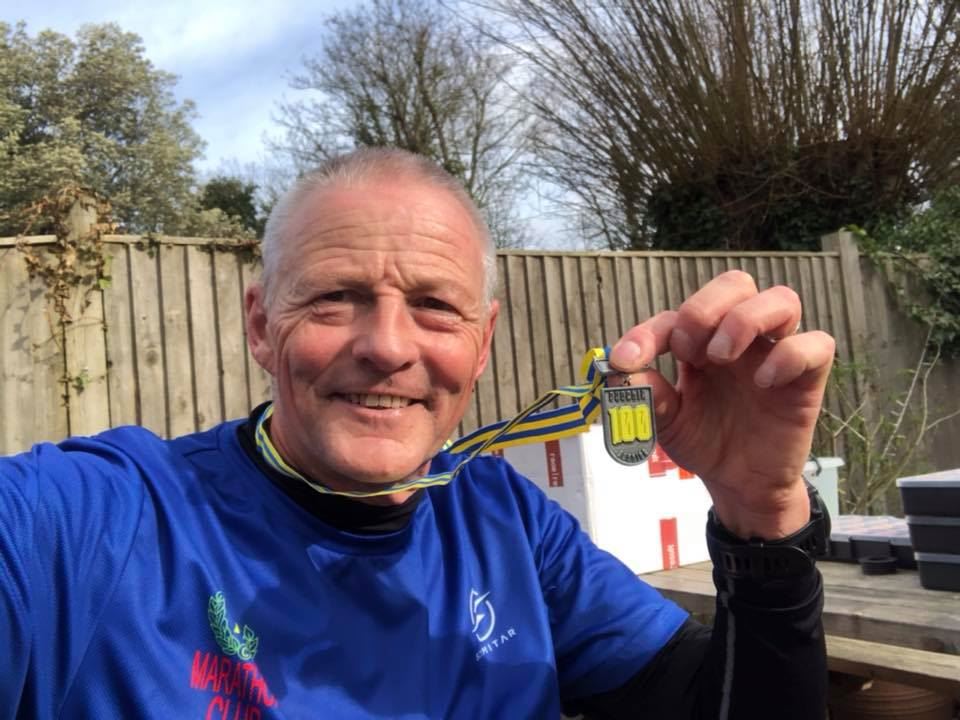 From Ashley: So it was Exeter City 10k for me today...pretty ropey organisation with the race director at the start describing the route as ....”Run 1200m that way until you see the lady with curly hair...then turn left...do 2 laps and run back here past the curly hair lady”😂...no signs and very few marshals! But anyway despite the wind, a flat route meant I managed a top ten finish with official times yet to be released! Didn’t see any other Yeovil vests there! 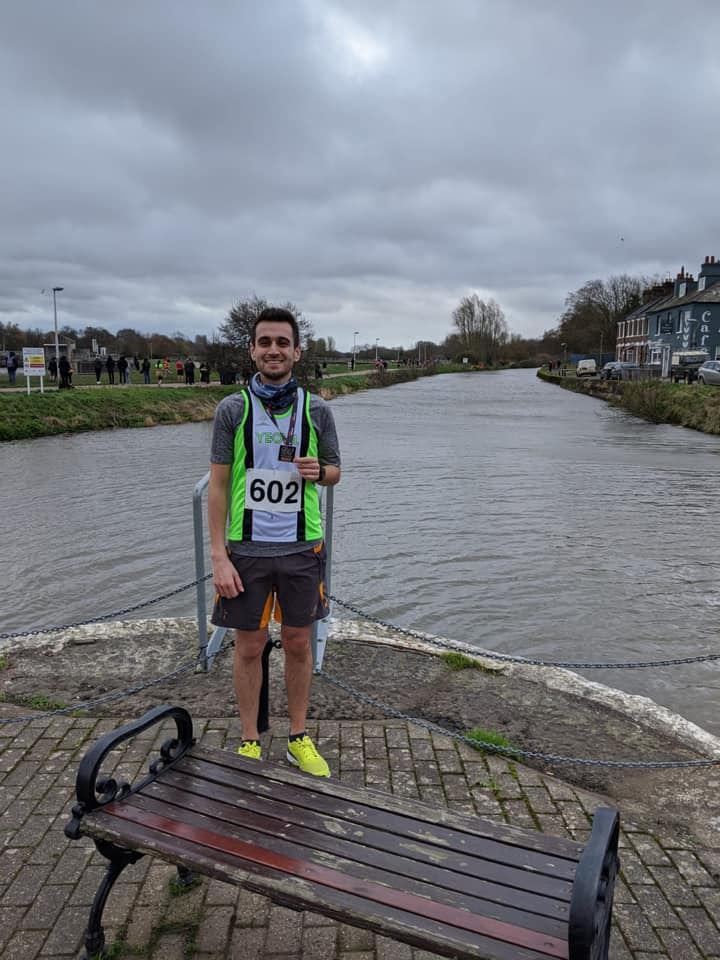 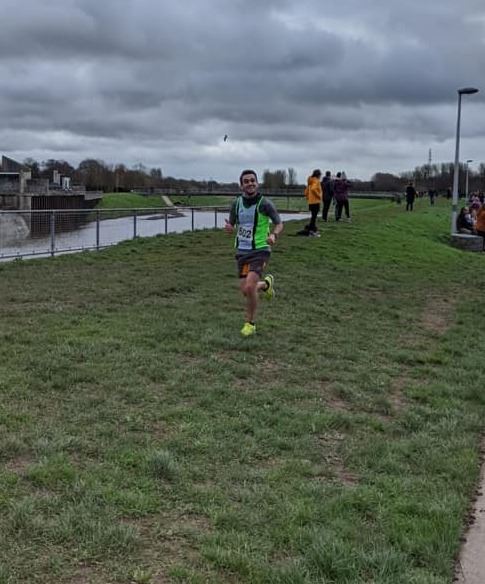 From Kev: Babcary 7.5 mile Club Championship today, this small village undulating race had a decent Club presence today . 11am start and headed up hill for first 1km then into rolling hills , we encountered some strong wind and then driving rain at about halfway ... finished with nice down hill of about half a mile back into village hall playing fields and luckily no lap around perimeter. Tea , coffee and cakes at the end ... people disappeared quickly at end and no results out yet.... to follow .. 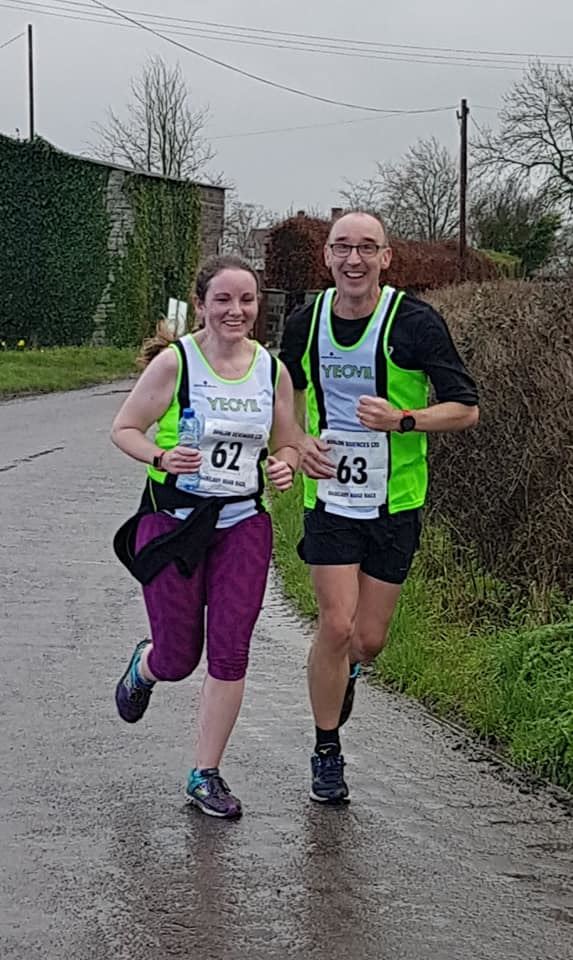 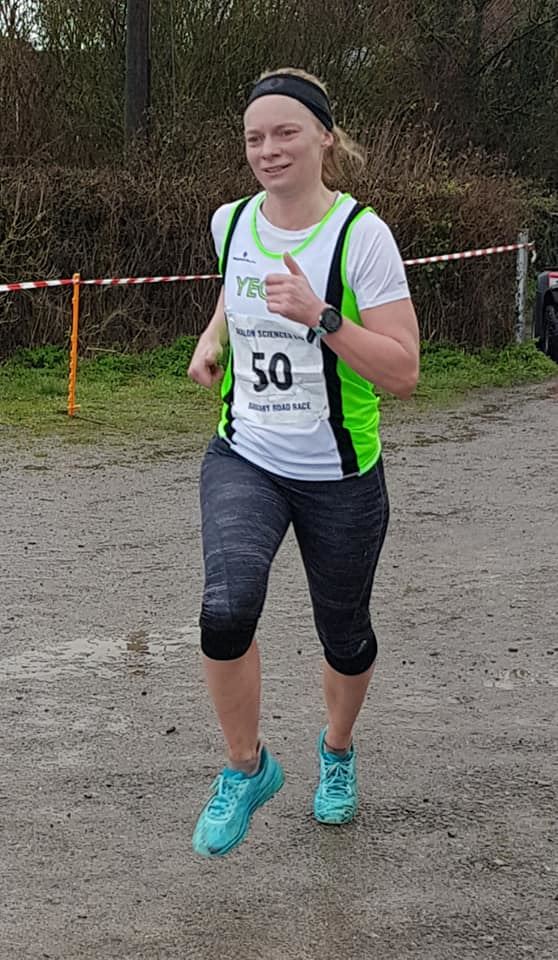 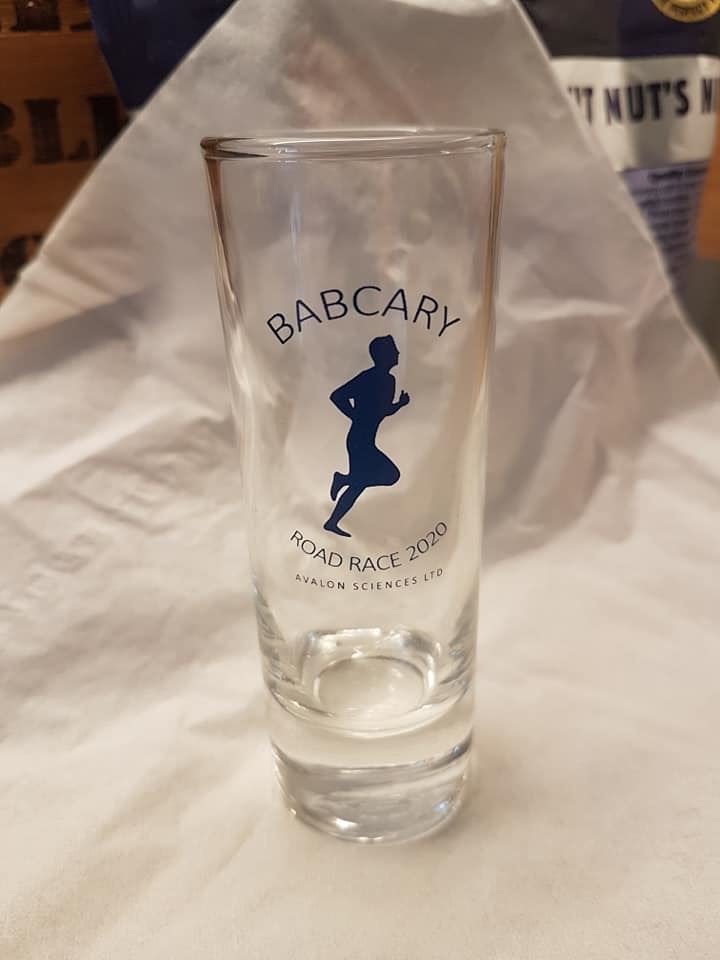 From Marathon Mike: This is a small local event and takes place in Oscar Scherer State Park which is located near Venice on the west coast of Florida, about an hour drive south of “home”.  All profits from the event benefit a charity in Peru, the Villa La Paz Foundation which provides food and medical care for destitute kids. The 25k (billed as the Fun Run as there’s also a 4-lap 50k) is twice round a trail of just under 8 miles, some is in the open, some under trees, so there’s a mix of sun and shade. It’s flat with a lot of single track which winds through palm trees and giant ferns with fairly dense undergrowth in places, lots of pine needles with hidden tree roots ready for those tired legs. This year there was about 2 miles of unavoidable dry soft sand about 3 inches deep on each lap which sucked. There are no awards except for the outright male and female winners, so it’s very much a fundraising and fun event serving as a good training run. 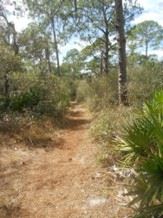 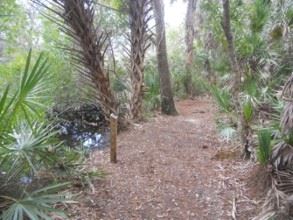 The race started at 7:30, it was chilly for the time of year here, only 7 degs. the sun shone the whole time, the temp went up quickly  and it was starting to get a bit hot on the stretches without shade towards the end. I managed to finish without falling and with no aches or pains from my knee and calf so hopefully I’m fully repaired, just have to develop the stamina some more. 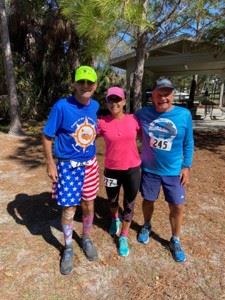 A rose between to two thorns?

Well done to Trevor who completed his 100th Park Run at Goldenstone. 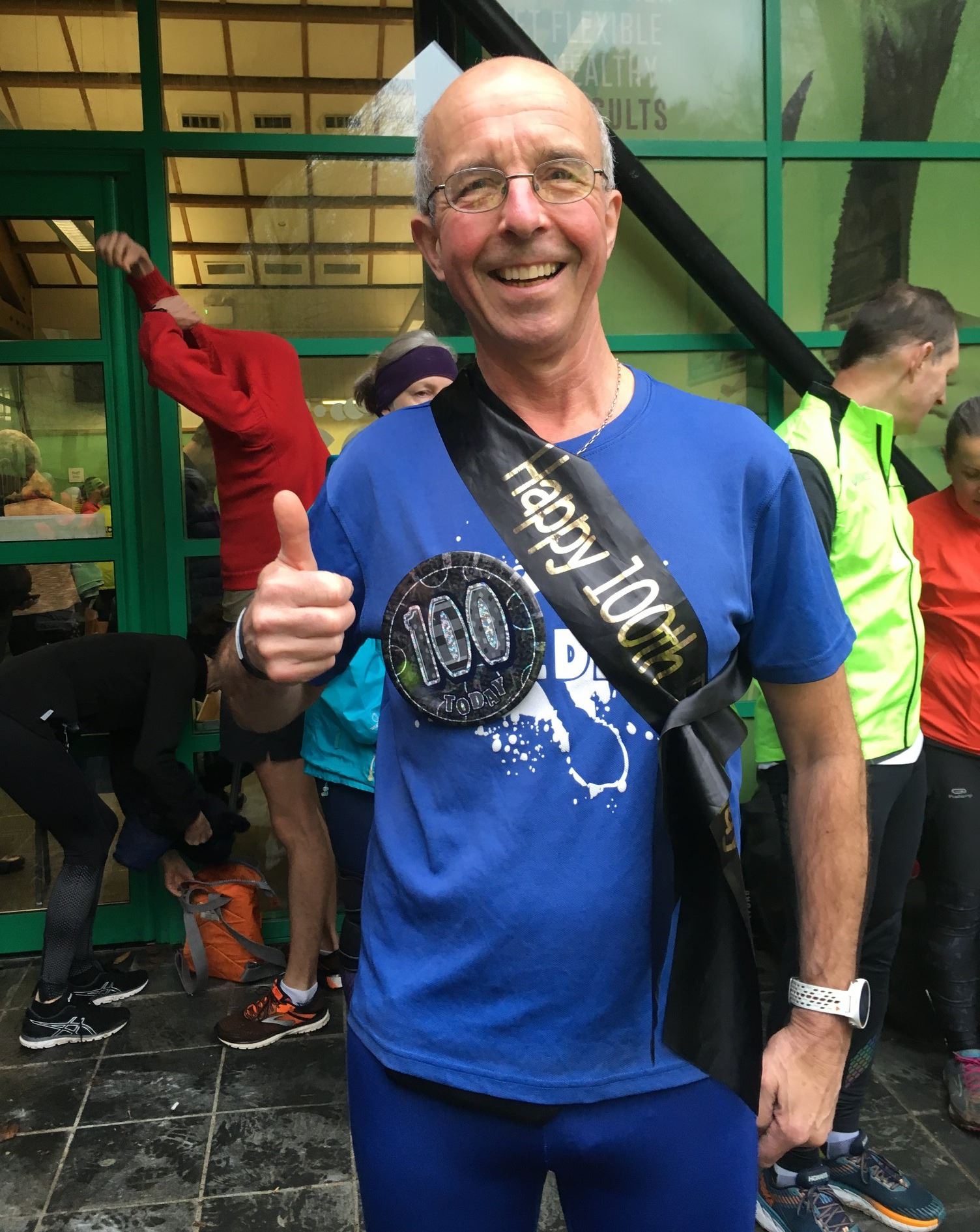 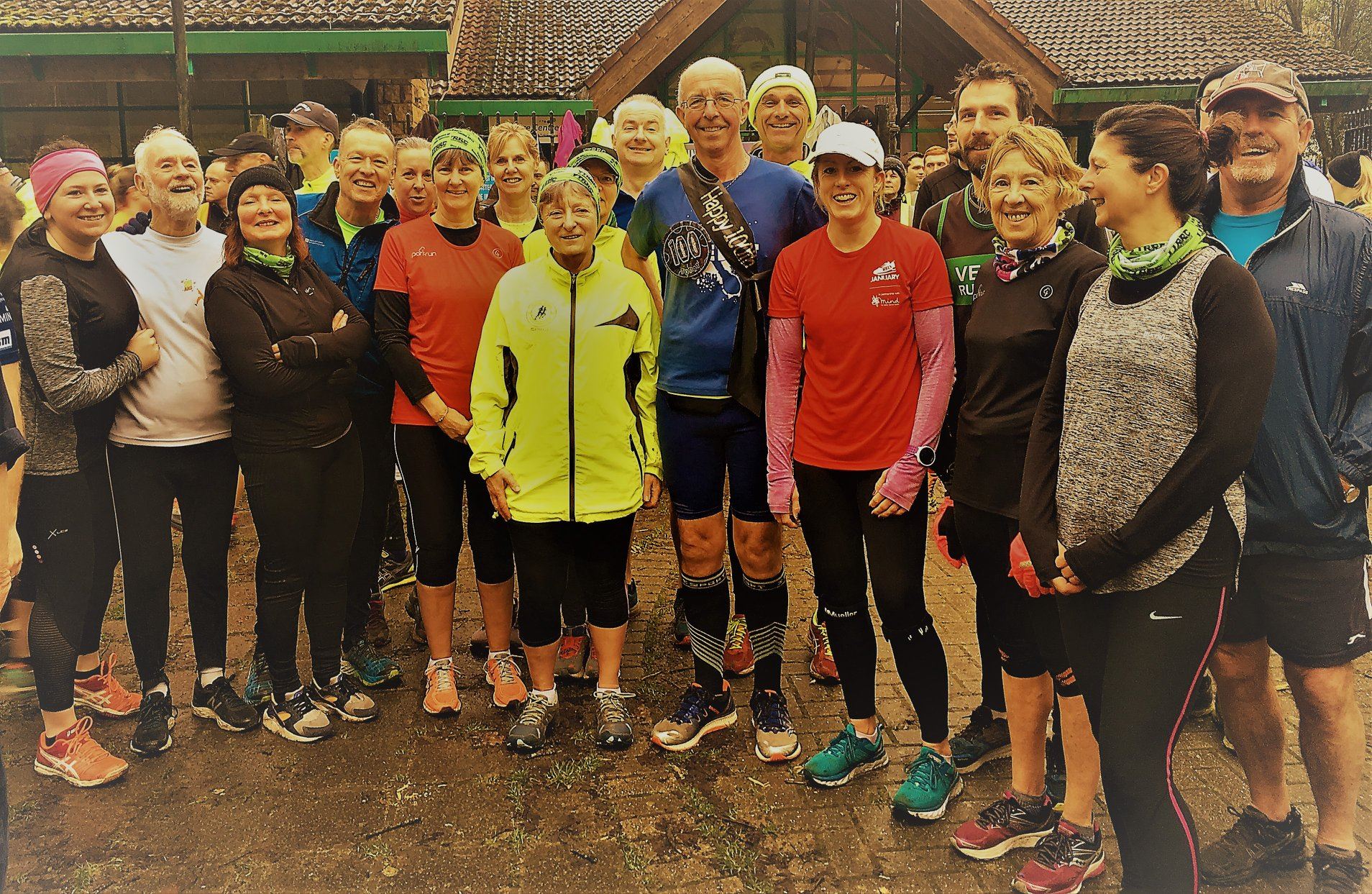 From Graham: We’re going to change things a bit from previous years. So, 3 teams, 1 ladies team, the other 2 teams will be of equal ability. The teams will be competing against each other, hopefully making it more fun!

The team captains will choose their teams once we know who’s interested in this great day out. The club has very kindly offered to pay for the entrance fees & mini buses/fuel.

We’re looking for 6 runners per team, who’ll run 2 legs each. All competitors MUST recce their allocated routes & be familiar with their surroundings on the day, we don’t want anyone getting lost! I’m also looking for 2 drivers, I’ll be the 3rd, I don’t plan to run.

J.C. led again, the main group consisting of J.C. Kirsty, Louise, Matt, and myself. The rain had stopped, and the wind had ceased, but the temperature had dropped. Leaving the pub, we ran north east along the Fosse Way, turned right, and ran along a narrow muddy lane that became a steep climb as we approached the Lodge. We ran through Hinton St George which is a very nice village. At the other end we turned left, and forked right. This road took us down to the edge of Lopen. We ran round the back of Lopen back up to the Fosse Way. We continued up to the roundabout at Lopen Head, and continued towards Seavington St Michael. In the village, we turned left and ran towards Seavington St Mary. We climbed, then reached Longforward Lane. A left turn followed by a right turn got us running back along the Fosse Way towards the pub. It is interesting that on the OS map, the Fosse Way seems to end at Dinnington, with no obvious indication of how it continues. It seems to pick up again at Tytherleigh north of Axminster. I’m not sure but I think it ends at Axmouth. The run was 6.32 miles with low and high points at 1 ft and 216 ft. Thanks to J.C. Phil and all.