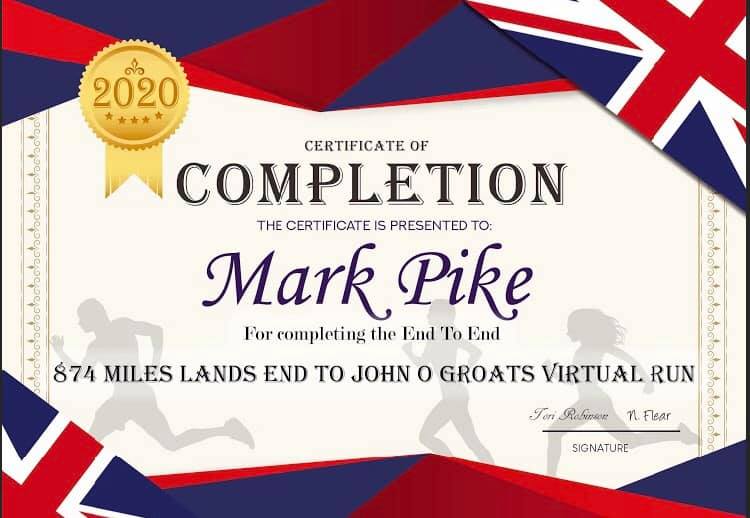 An amazing effort from Mark Pike to complete the End to End LeJog virtual distance of 874 miles coming in 14th overall and first YTRRC, and is now believed to be working on a patio somewhere?
Bungy Williams is currently 2nd YTRRC on 684 miles and is in Dalwhinnie (somewhere in the Cairngorms).
Luke Hicks can’t sleep and is running instead, so he’s Level with Kilmarnock but otherwise in the middle of nowhere, on 539 and third YTRRC.
Dave Tilsley has stepped ahead of Steve Lye, both just past Morecombe on 422 and 420 respectively.
Anita Rufus is on 369 and in Wigan
John Foxon has overtaken me and is in Warrington on 356
Meanwhile, on 321, I’m at Loggerheads!
Mel Dodge is in Stafford on 311
Graham Still on 300 and in Cannock, has gotten in front of Steph Brearey, 289 and in Wolverhampton
Magdalena K is in Birmingham on 281
Brian Lane is in Kidderminster on 278
At 214, Catherine Thompson is in Lydney, just back in England from the Wales detour
John Hayden is in Clevedon on the darts score 180
Dan McFarlane on 172 is already in Weston-Super-Mare, getting there ahead of James Hutt who is on 160 and in Puriton
Catherine Parker-Johns is in Tiverton on 126
Take a deep breath, and now for those that started a month later…
Tina Beard still leads despite the shoulder breaks, and is already on 227 and in Gloucester!
Casper Harvey is in Portishead (maybe for some training) on 185
Richard Clayton is enjoying the seaside at Burnham-on-Sea on 165
Yunmi Yang completes the set on 103 and is now at Whiddon Down on Dartmoor.
To be honest, personally the initial excitement has waned a little, although I was pleased to get over the 300, and I’m due back in College next week so I’ll have less time due to commuting. However, its very inspiring seeing how everyone else is doing, so keep up the good work and we’ll soon get there!

A massive well done to Mark Pike for finishing his 874 miles, a great achievement and 14th place overall. Mark managed 177 miles this week, I still have 189 miles left so at least two more weeks. Have a few days of Mark, then run back. 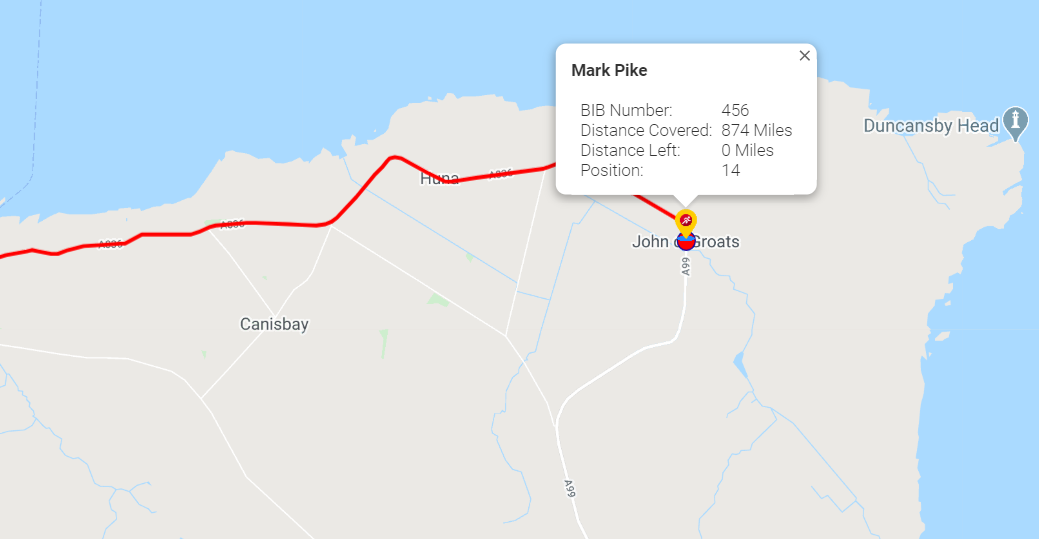 From Anita: This months challenge for the ladies was a running woman distance challenge where we all chose a distance (either 50k, 75k, 100k or 150k) which had to be run in the 30 days of June. The first week in everyone seemed to be well motivated until Nat Robins came a cropper and had to drop her distance down to the 50k. Most of the runs were solo but a few did manage to get out in groups. As the days got slightly warmer the enthusiasm waned and the panic was starting to rise. Angela smashed her 100 and decided to up her mileage to 150k. Lindsay started to panic as the final days were looming but somehow managed to run 10 miles over (it obviously didn’t rain enough!) There were a few ladies that couldn’t manage to join us for the last hurrah but all for good reason! Paula was sadly just too far away.
The majority of us met up at today for a staggered 5k 🙄of larkhill loop. Start times were worked out by their usual 5k timings 😉 Some were sent clockwise others anti-clockwise and the idea was trying to catch the one in front. Some did, some didn’t but the main objective was to have some fun and I think this was fully met. June proved some scrummy cake and Tim provided the fags.
Well done you lovely lot and to the few that couldn’t manage to join us today for one reason or another 👍🏃🏽‍♀️ 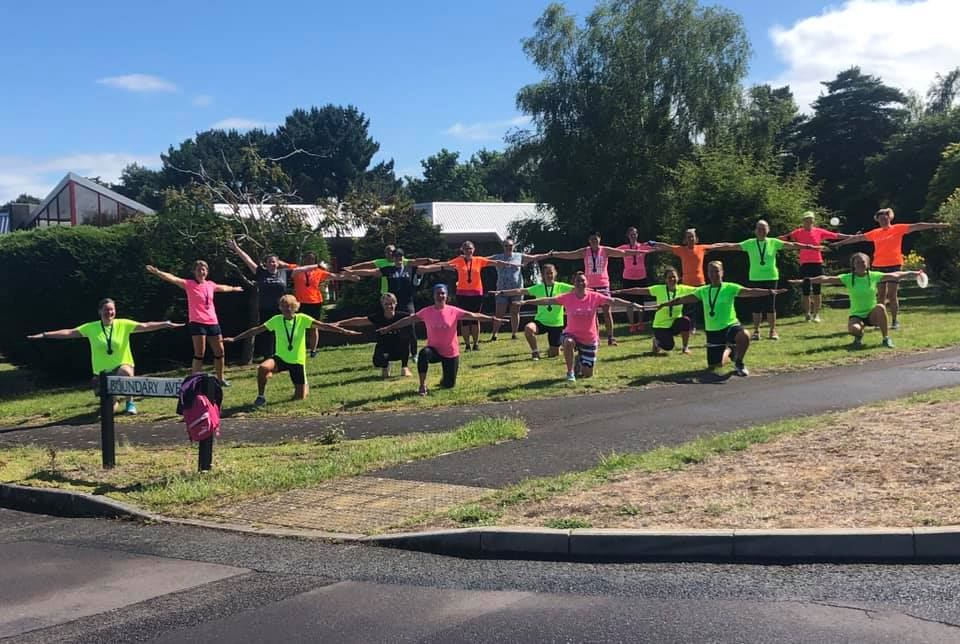 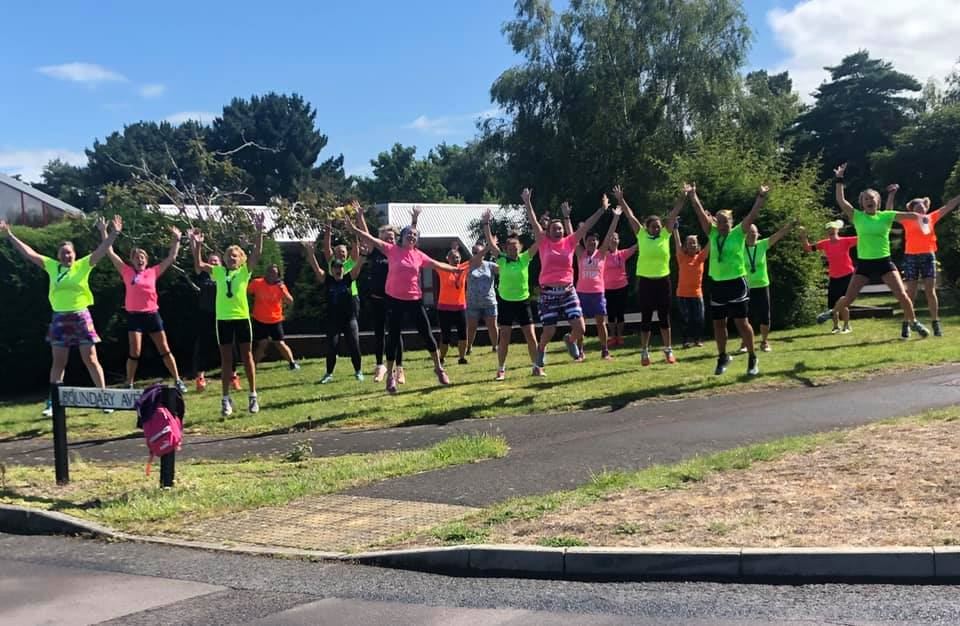 The 4th of July

Another dit from the past

WEAK-END IN JERSEY By Trevor Howells

"Have you set the alarm?" said Dee. Set it? After a night at the Hollywood Bowl I could only just see it, let alone set it. "Yes" says I wondering why I was going to get up at 4 o'clock when I was only going to bed at 12:30. "Time to get up" I hear, what already?

Open one eye at a time, it won't seem so bad then. You'd better drive this morning as I think I might feel a bit under the weather. So off to Poole, pick up Richard and Sally and down to the ferry. "Do you want to travel this morning?" they ask as we amble through the terminal.
"Of course" we say "that's why we are here". ''Well you are late and you'd better run as the ferry is ready to leave"
What a start to the day. On the ferry and within five minutes we are away. "Anyone want coffee?" No not for me thanks. I think I will just shut my eyes for a few minutes. "Do you want anything to eat?" Now that is the last thing I even want to think about. Here comes Dee, bacon roll in hand. Excuse me, I think I'll pop out for some fresh air! ''Not a bad crossing". Go away and leave me alone, I'll tell you later if it was good or not.
At last, away from Guernsey and on to Jersey. No-one to meet us at the ferry, still good old mobile phone, one call and it is sorted. I knew it would come in handy. On to the hotel, hmmm, not bad, swimming pool as well, if only my head would stop thumping.

Into town, lots of shopping and by 4 0’clock I start to feel hungry. Sandwich and cheese pastry, that will do fine. Pasta party at 7:30 that's OK but wait, where's the vegetarian option. The first one has ham in it. Oh well the chef will do something else. I don't believe it, the next one has tuna in it. Not much good for me, then. See the organiser, get our money back, down the road for pizza and chips. 10 0' clock bit late
but still a good night's sleep and we will be fine. 7 o'clock up and wash. Down for breakfast. Car arrives on time. Things are looking up.
Up to the start of the race with almost an hour to spare. Must be a first! Plenty of water - not too much, have a good stretch and warm up. Warm up it must be 70 degrees already. Still not much we can do about that. Do you need the loo? I didn't before you asked but now that you mention it "Better hurry up then as there is no water". Oh no, all these people, quick get in the queue, should be OK. Only 4 people in front of me, now 3, now 2, I am next I think, but when it gets to my turn I decided that I would not bother, if need be, I will stop on the way around! PHEW!!

Ready Go! that's it, we are on our way. Not too fast, not too fast, difficult but I have been caught like that before, trying to keep up with Elaine “Roper” at the start. Check the watch, look for the mile markers, stay with the pack and settle down. What's this, short pink shorts, crop top, pigtail through her cap, this will do me, I will just tuck in behind and watch the miles slip by, but she's getting away. OK let her go make the effort, keep it steady and you will be alright. 4 miles and I am feeling like s**t. "Come on Yeovil, keep it going". How did he know I was from Yeovil? Two miles later after another few "Come on Yeovil's" it dawned on me that it was the vest! Feeling better now, miles passing by. Must remember to look up 'undulating' in the dictionary as there it seems to be 'more uphill than down' 8 miles and there's Sally at the water station "Come on, Trevor"

What is she doing here? I think to myself still it helps to pass another mile or two. "Come on, nearly there now". I wonder how many times I have said that with the same smug smile on my face at the Easter Bunny, Mud Run, 5k etc. Now I knew why I get some withering glances. 10.5 miles, hello here is those pink shorts again. "Well done, the worst is over". I say with a big grin as I pass by. 'Is this the bone jarring down hill towards the finish?'

Thank goodness we really are on the last lap then. Hang on though, no-one said that after the long down hill towards the finish, there was
another mile and a half to the actual finish or that is almost a mile and a half up hill. Legs really heavy now, getting slower or is it all in the mind.

Pass this guy and try and get the next, getting lonely out here now, where is Claire or Shelley? I have got no-one to talk to. Keep going must be just around this corner now, well perhaps this corner. There it is. FINISH in big letters, watch the clock, why is it going so fast? Come on legs, remember what Chris said at Stoke St Gregory. One more, pass one more. There he is 6 foot 2, legs up to my chin one stride for every three of mine, and not even as old as my daughter. Yes I've got him, just before the line, now where's my T Shirt? That is all I came for really, lots of water, now that feels better. Right, let's go back out to look for Dee “Howells”, here she comes, hey who is that in front of her and why does he look as if he is break dancing. Two steps forwards, two side ways neither foot knowing which way the other is going. Don't help him shouts Dee, no don't help me he says.
OK then I will just wait until you fall down! Come on I said Only a few hundred yards to go. Dee goes on, leaves us to it "1 can't" he says
"You can" says I. "Do it in your own time" a few more steps some forward of "Have some water" Nearly there now, why have you stopped? You have only passed the first cones, another 20 yards to the finish. Big effort, arms and legs going in all directions and yes he's over the line and in under two hours. Knees bend, grab that post, hold him up or he will fall. "More water" I shout and bottles appear from all directions. Perhaps I should have shouted "more beer" to see if the result was the same. "Thanks, mate". "No problem, been there myself as I leave him with his girlfriend to relive his race. Now, I wonder if the pub is open yet!