A Trip to the Smoke 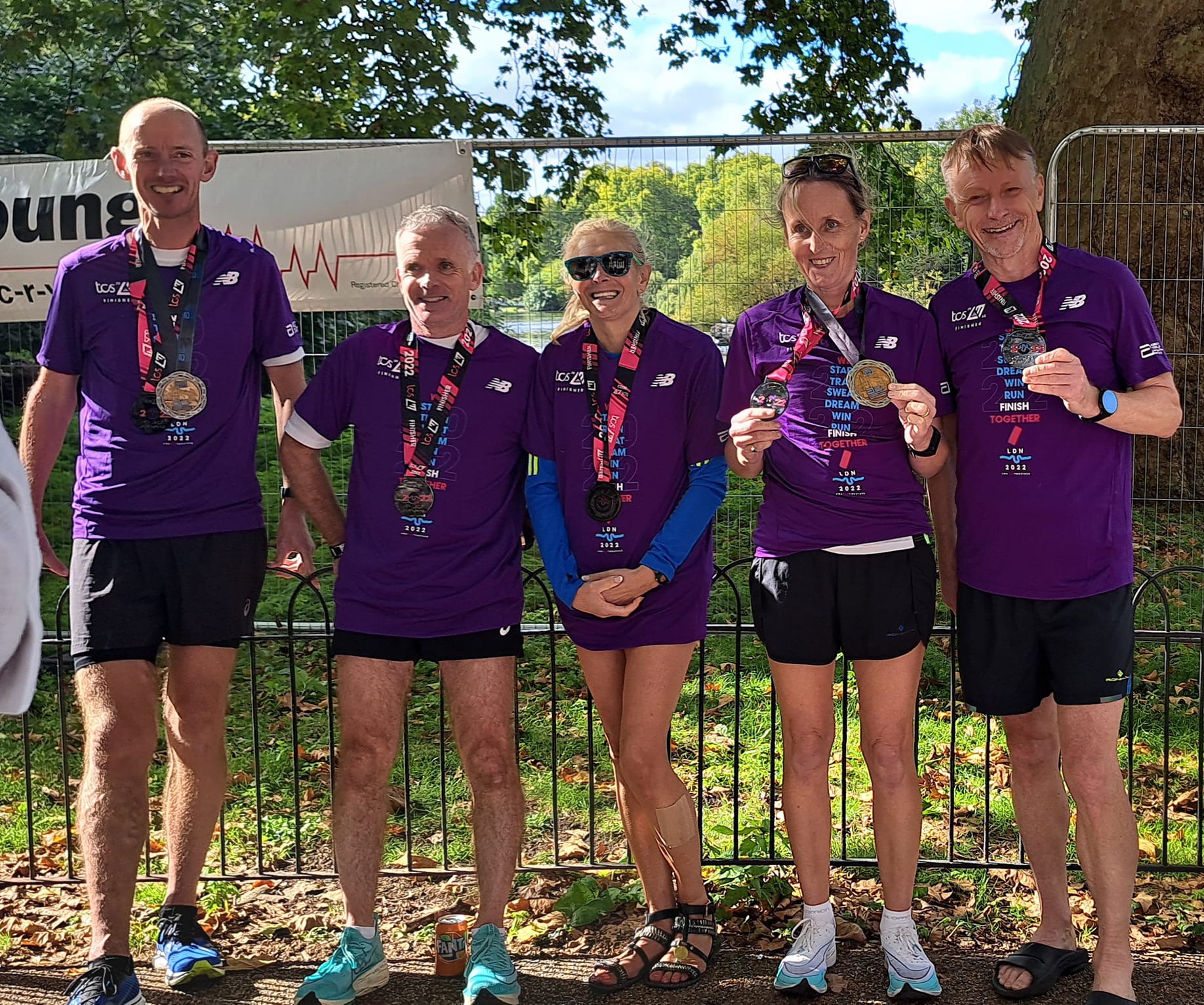 Please can you book up as we have not got many that have. Thanks

From Eleanor: After a 5:30 wake up call in the dark and getting ready quietly so not to wake anyone. I set off at 6:30 in pouring rain toward Cardiff. Thinking not sure I want to do this. Eventually it stopped raining by the time I parked and sorted out the ticket at 8:45. Headed towards the shopping mall for a toilet break which it seemed most people had done the same. Couldn’t find the yellow pen at the start but the helpers were lovely and I soon found it.

The sun was blazing at this point and I was regretting the 3 layers and a coat I had with me packed the coat away and left my vest, t-shirt and club vest on. Wished I’d stripped back then . Then we were off, lots of people and a slow start trying to find a space. Saw a few people in fancy dress including a man dressed as a gorilla and fake human legs in a cage he was carrying crazy dude!

By mile 3 I was head of both the 2.5hr pacers. A few hills at the beginning which I wasn’t expecting and running into the sun as we went round the marina. I caught up with Margarita by mile 5 and said hello. Just after mile 6 I had a bit of a wobbly and didn’t think I could make the half, I was struggling my head kept getting dizzy, maybe gone out too fast, not fuelled early enough? It was a lot of stopping and starting from then on. I had my jelly gel and instantly regretted it. Should have brought a marmite sandwich

The first 2.5hr pacer past me at 7 miles which I was annoyed with myself then the second one went past me at 8.5miles not sure why they weren’t together I couldn’t keep up but couldn’t see the 2.45 pacer so I just kept that in my head and plodded on. One thing I was shocked by was these bins for men to stand and pee into along the way that was a new one for me.

Lots of people struggling by 10 miles and some on the floor getting medical help or being sick the crowd and bands were fantastic and lots handing out sweets and drinks. One guy was even handing out Mr Whippy ice creams

After I thought we’d gone up the final hill I went round the corner to get another short sharp hill just before mile 13 I powered up it, I just wanted to get it over with now. The finishing crowd were loud and supportive. I sprinted to the finish line that took forever to reach. A new PB for me by over 4 minutes. Missed my sub 2.5 by 4 minutes I’ll have to leave that for next time. 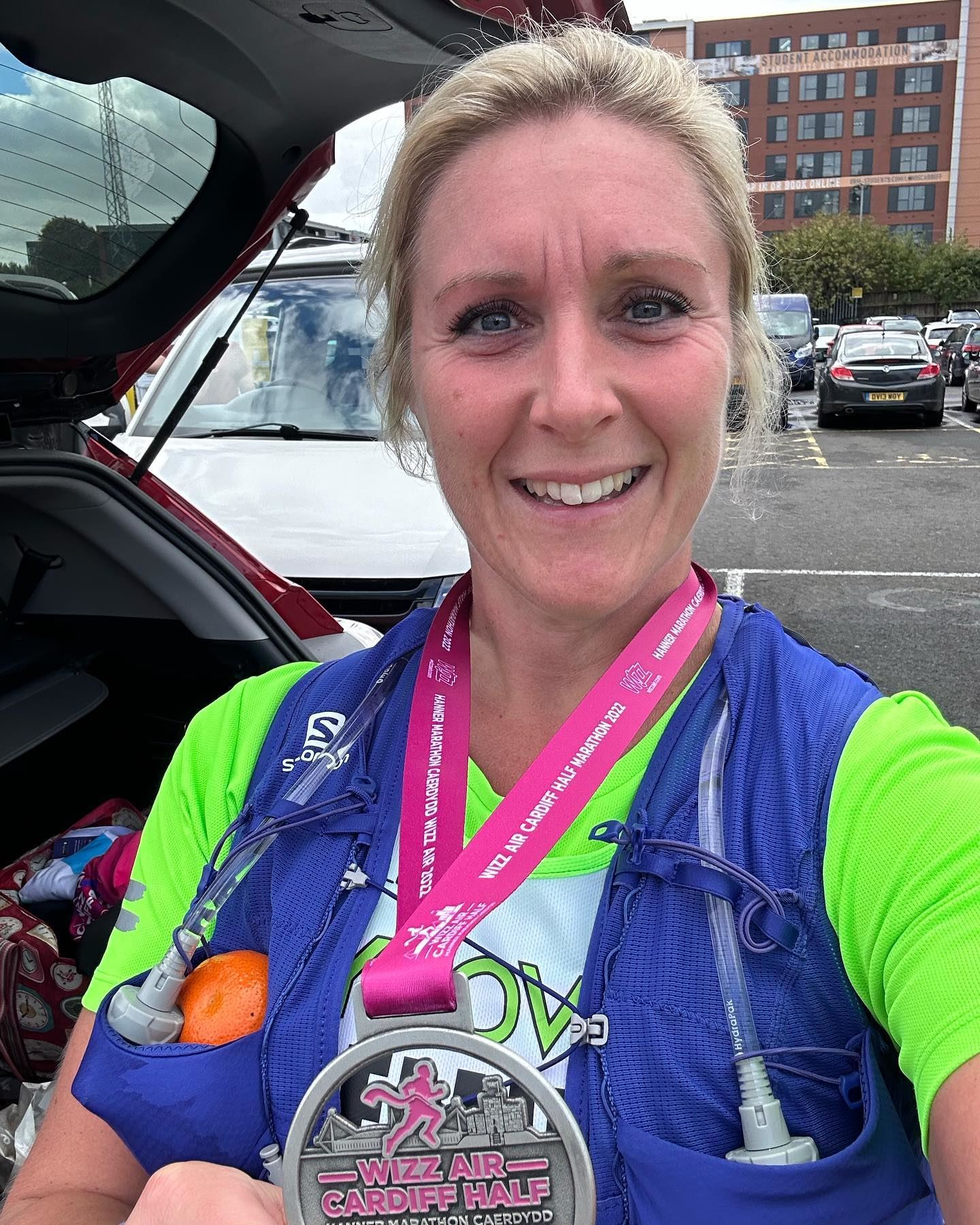 From Lynne Tea: Great day at the Exe Estuary marathon today. Yes people , other marathons are available. . Tara , Dan and me set off in rain and by Exmouth sun broke out. Stunning views , coastal path , one of my favourite marathons …. Just stunning. 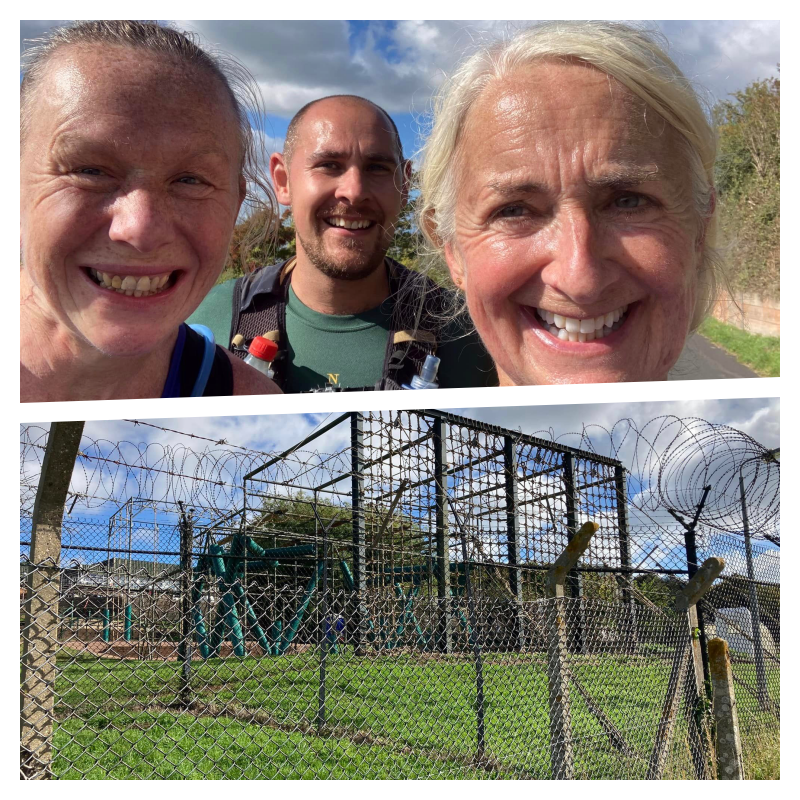 The 30ft Ropes, been up them a few time and also over the Monkey Bars 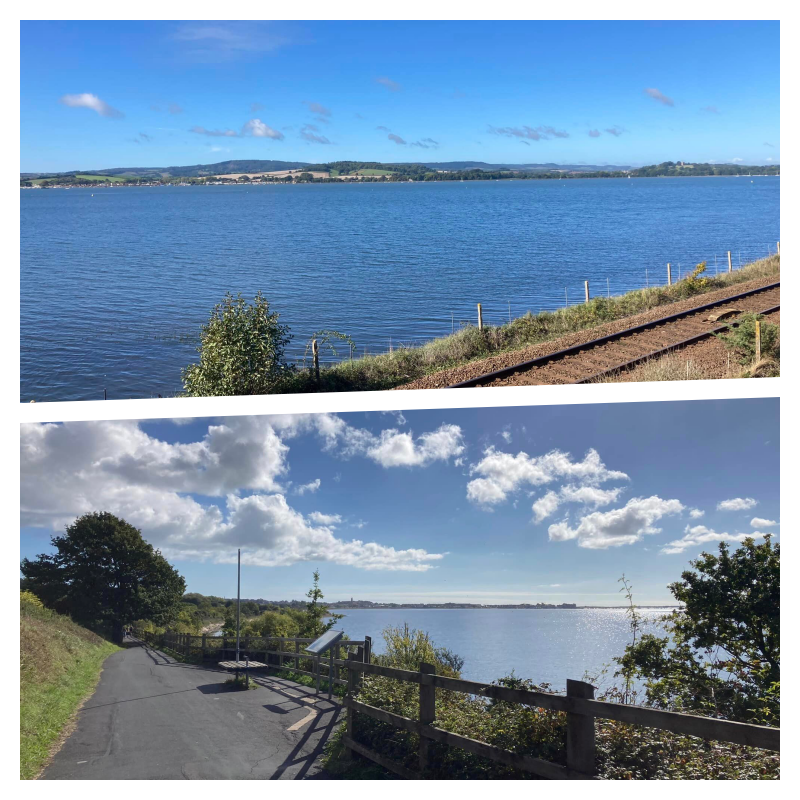 From Me: Today I did the Clarendon Marathon, now in its 24th Year. There is also a half and a 4 person relay for the Marathon and I would recommend the Club enter a few teams as it will not clash with London anymore. It is a great Trail Route starting at Salisbury and finishing in Winchester, it is very well signed and loads of Aid Stations but mainly just water and a few sweets towards the end. 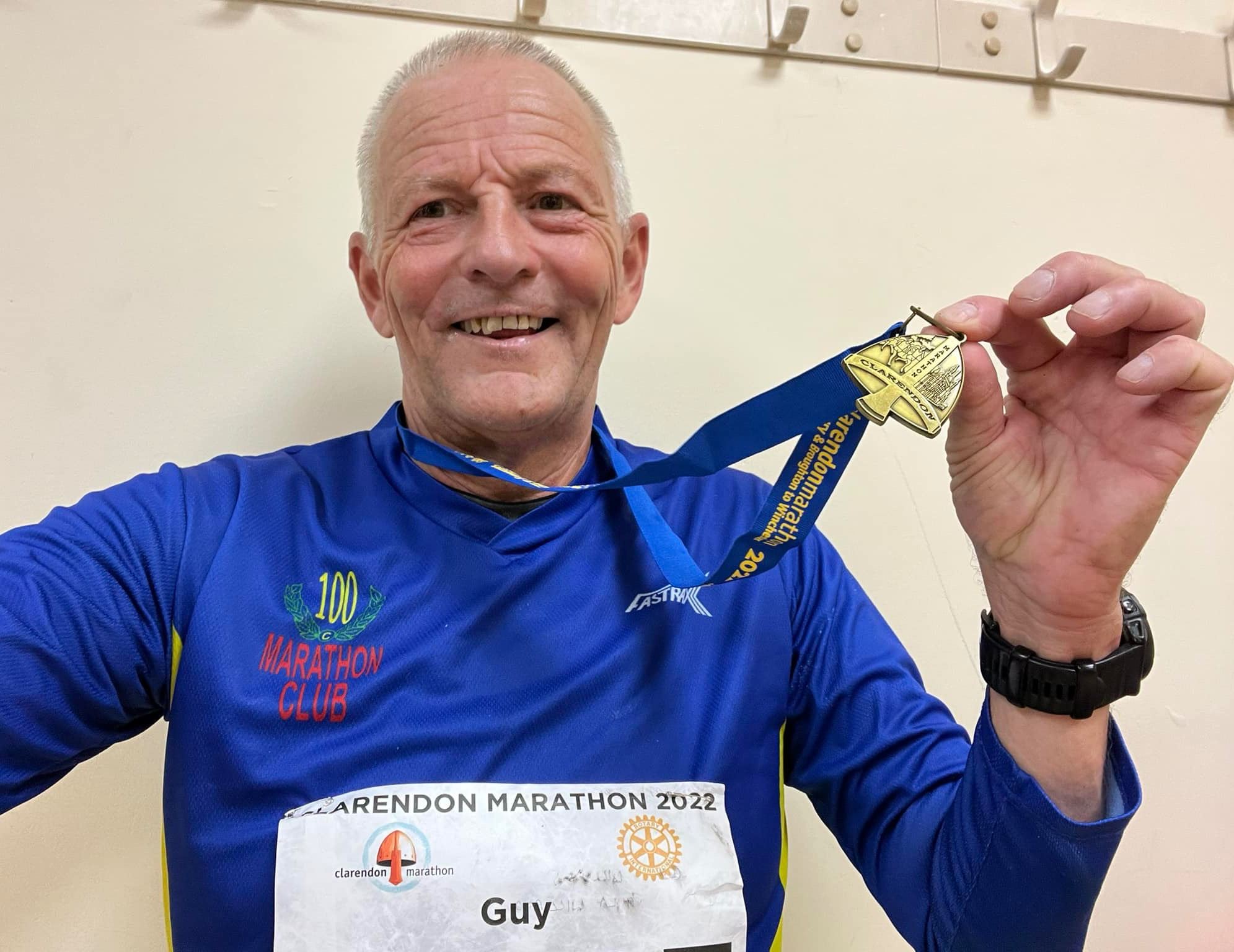 A Weekend in London.   Full Results

So we have 13 runners taking part in the London Marathon and it begins with the trip to the Excel Centre and the Expo. 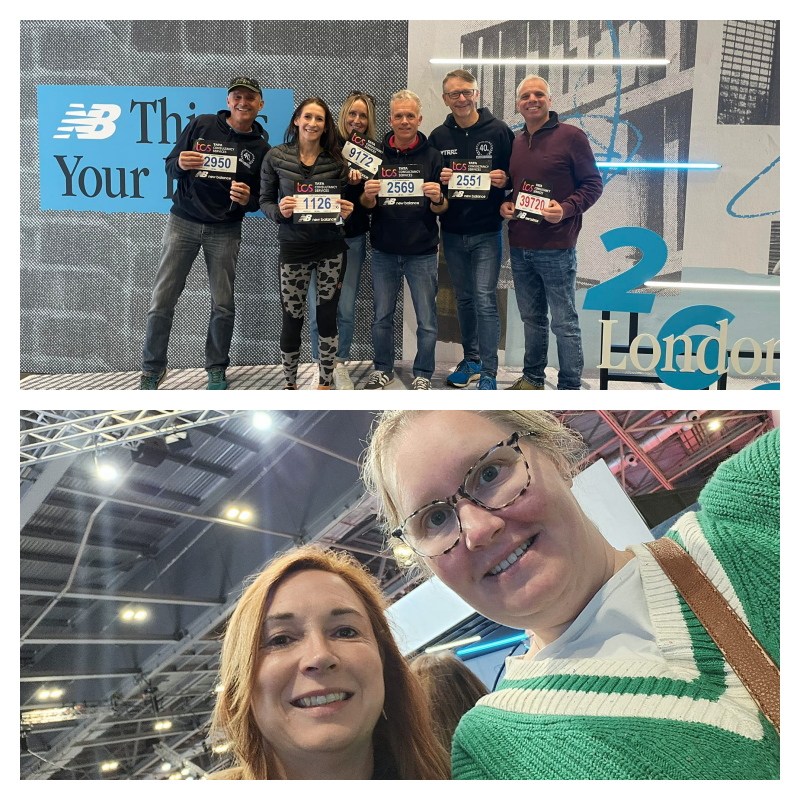 From Taryn: London virtual marathon today. Started at 7:10 am and in the rain for 3hrs! Great to sharon hardy and Rachael jones en route.

Glad to have got out and back- my hat complete after ultra last week!. Well done all running today but particularly running London. 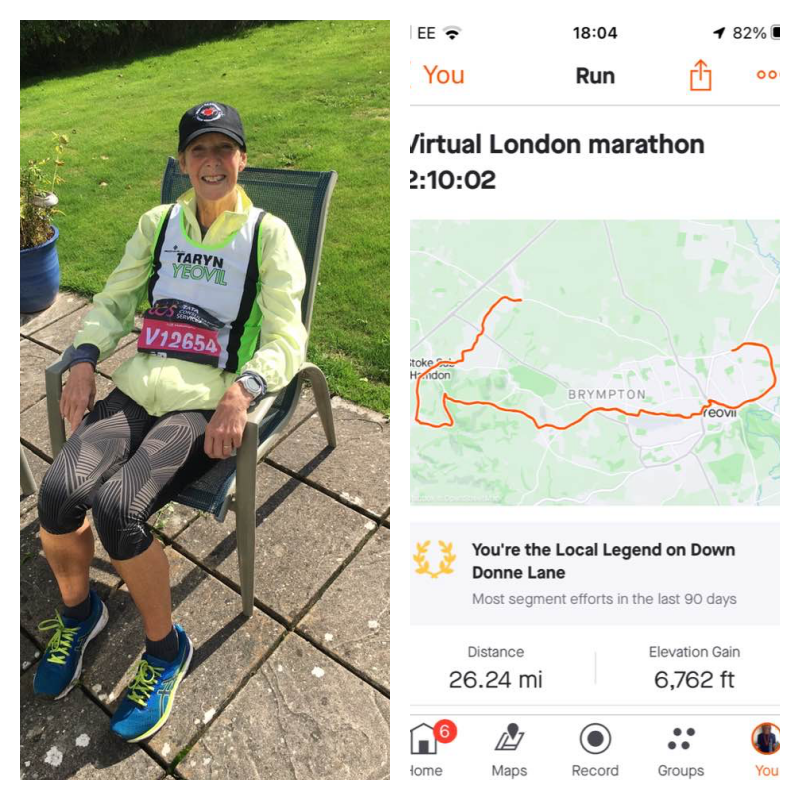 The results for the Race: 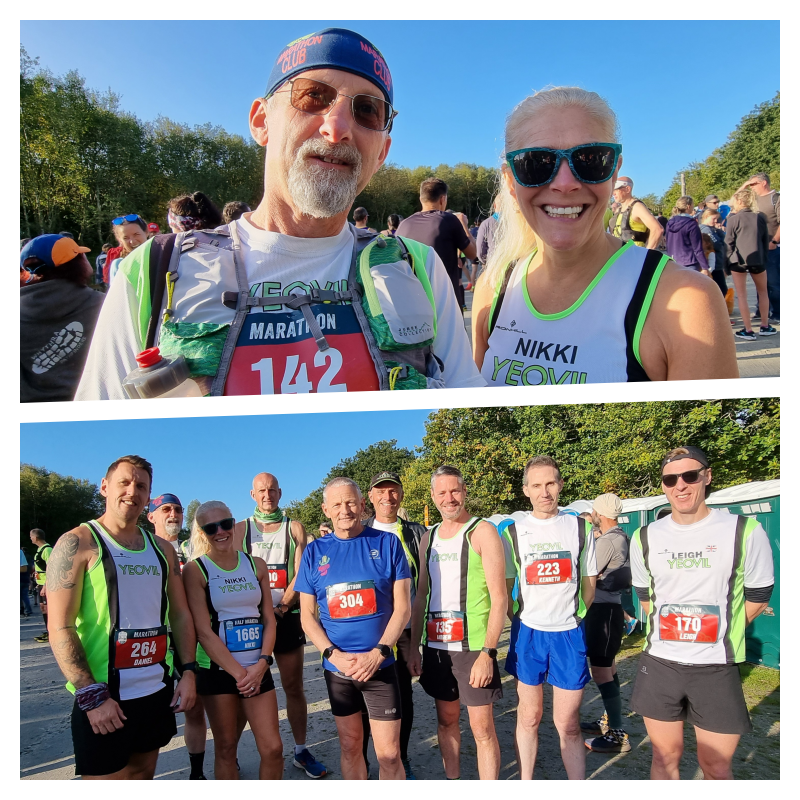 The one name hidden is Taryn.

From Yunmi: Congratulations to everyone who ran today! Fantastic running. Good vibes in the big smoke. Sorry we couldn't wait for everyone! (some finishers were shivering). I am sure there will be a finishers photo shots on this Tuesday! 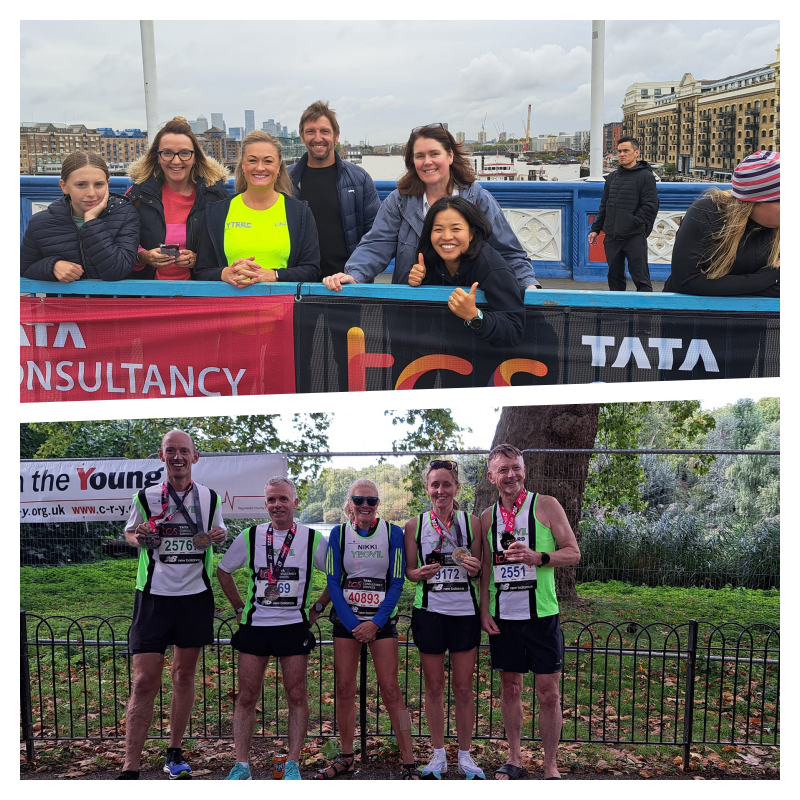 From Kevin: Good to be back running Seaton parkrun after five months with a time of 23.48, just got to get back up the track to get the speed back in my old legs. 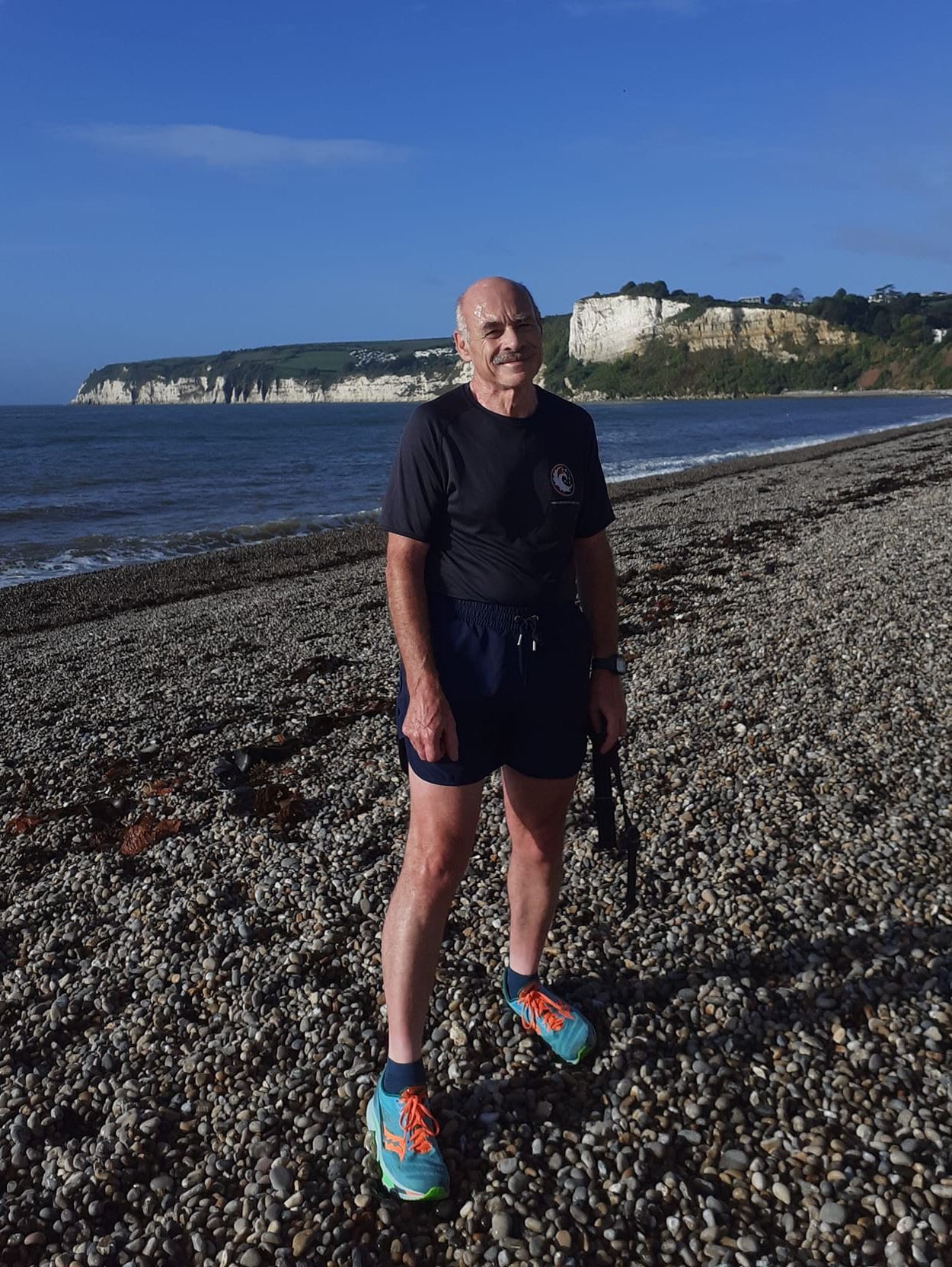 From Matt: A quick personal race report from me as I know THE BIG EVENT is tomorrow...I did the Frogmary Parkrun this morning. Very good event with good parking and coffee if you need it! It was my 4th ever PR and 1st time at Frogmary. I was 26th from 202 participants and its a Parkrun PB for me. However, since all four parkruns are in my slowest five 5ks ever, that doesn't mean a lot. What it does mean is that I hit my target of doing a 5k and I now qualify for a YTRRC Slam hat - yippee! So, if you're doing London tomorrow, best of luck to you, no matter what your personal target is! I'll be cheering you on...from the sofa. 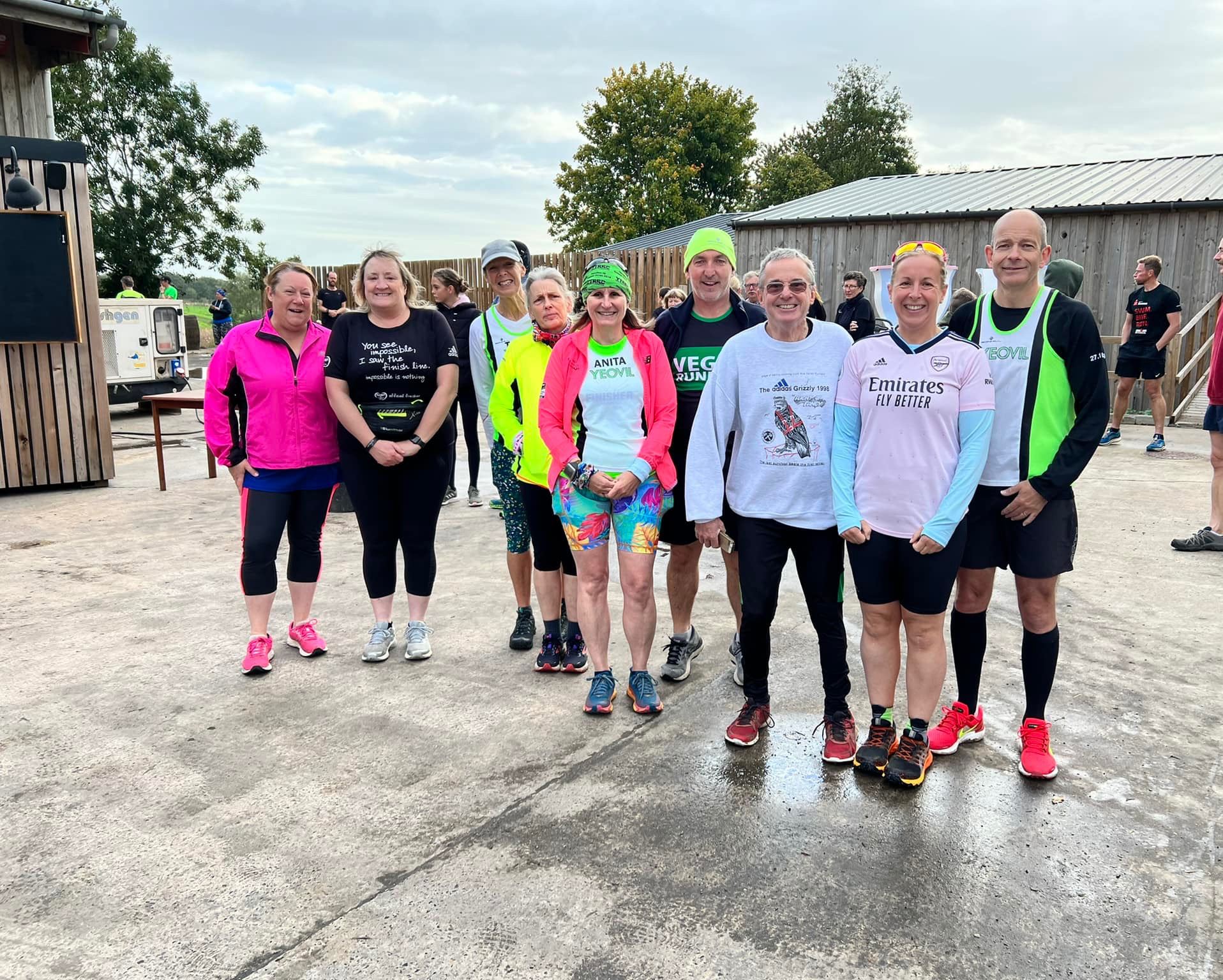 From Jo: Another great turn out at Frogmary Green Farm parkrun today. A couple of unfamiliar faces Matt Driver & Anita Farquhar Rufus. The things people do for a hat . I totally managed to forget (not sure how) that today was the 1st of the month & club colours were meant to have been worn

From Mark: I was privileged to lead a large group of 15 tonight in the not so fast group. JC, Paul, Dominic, Margarita, June, Louise, Kirsty, Laura, Alison, Sue, Rachael, Helen, Denise, Mel, and myself, left the pub, ran into the village and forked left. This road took us past the manor house. We descended, turned corners, and reached Yarlington Mill farm. There were great views to the south with the light already fading. Turning left just past the farm we continued along a narrow country lane which was soon blocked by a large tractor with trailer. There was literally no passing room. Our escape was up a bank into a field. The tractor passed and photos were taken. We continued, turning left at the end and running into Yarlington where we met another tractor. After a quick reference to the map, we made our way up Lodge Hill. At the junction at the top we met yet another tractor. Turning right we headed south towards Blackford. After about a mile we turned right and turned down the road towards North Cadbury. By this time it was dark and head torches were on. A dog barked as we passed. The large group was diverse in running speed and fitness/injury, so I had to focus to keep the group together and ensure no one was left behind. We proceeded along the road passing Woolston Manor farm and taking the right fork just past the left turn at Woolston. We then headed back towards Yarlington but took the first left and continued along Corkscrew lane. Caution was needed, as tractors could be heard up ahead, and there was a possibility of us having to get off the road again. Thankfully they were elsewhere. At the end of the lane we turned right and headed back to Galhampton. Thanks all for a great atmospheric run. I believe 21 stopped for the pub meal which I enjoyed. Thanks Phil for organising. 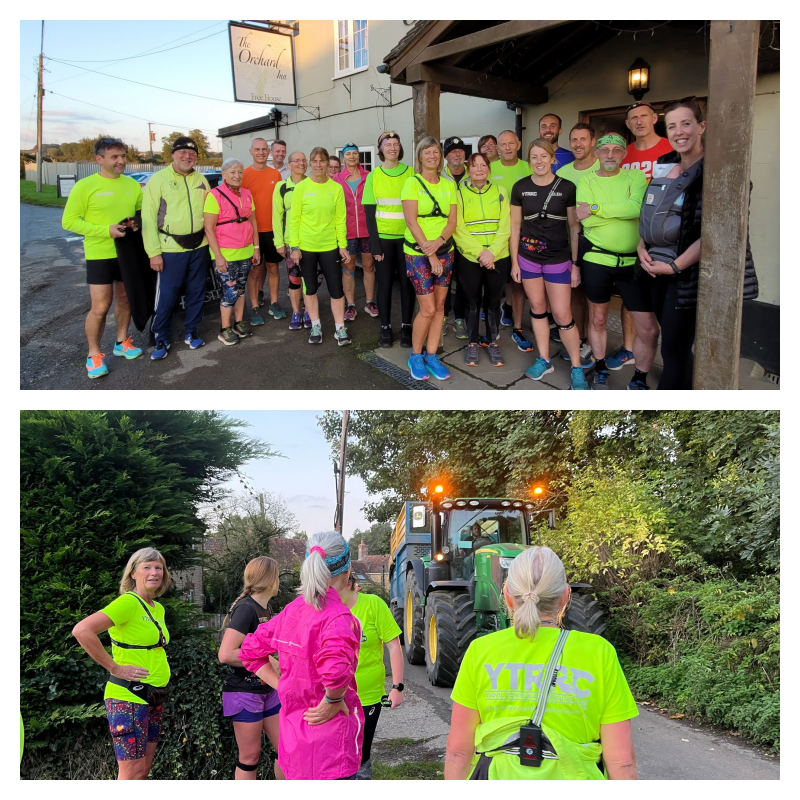 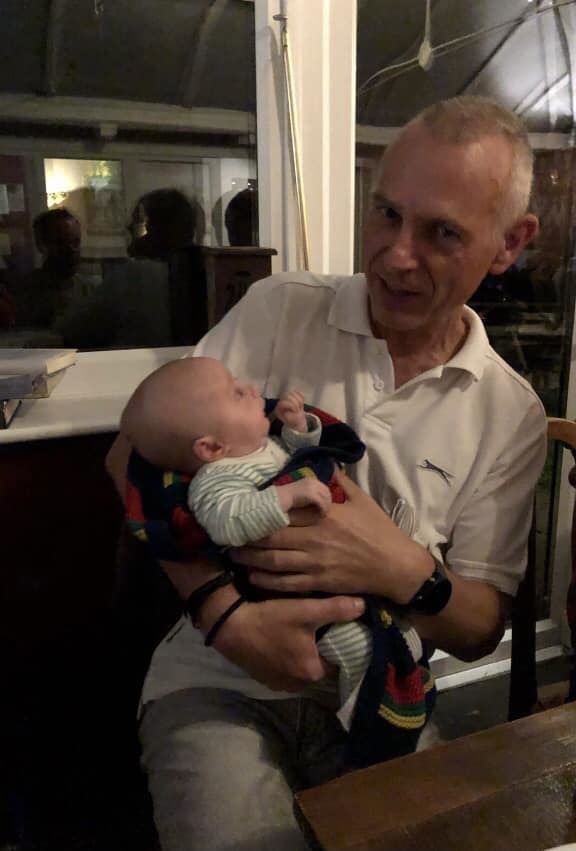 From Mark: 21 members plus Primrose, she hasn’t decided whether to join yet .