A Mad Cow in Ash 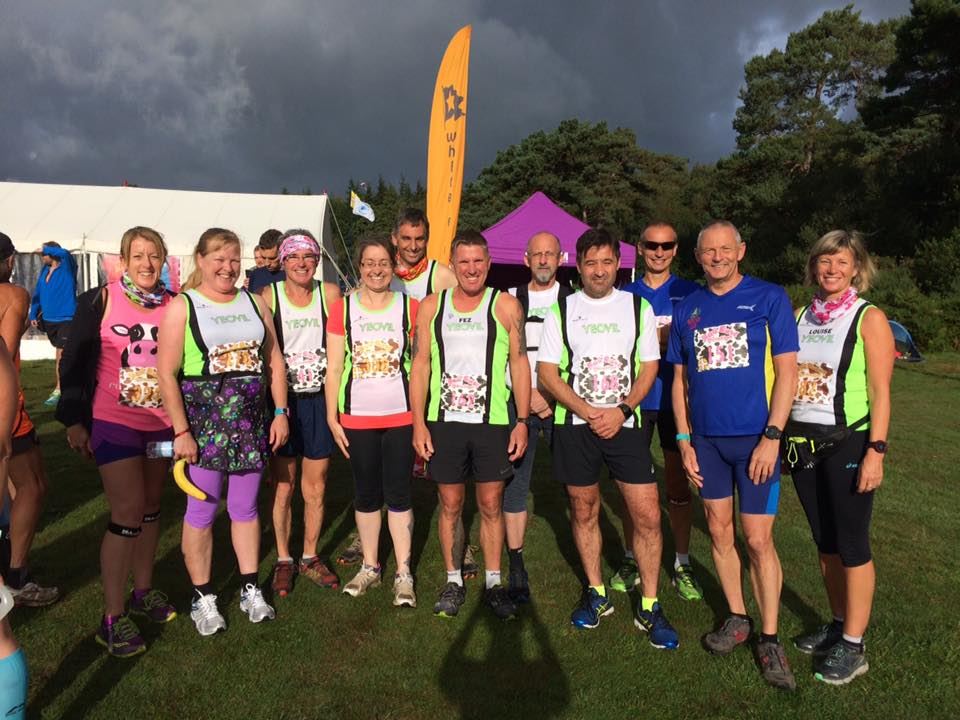 Sunday 17th September
For all those going on the coach, it will be at the NHS building just down from the Football club at 6.50am, it will leave PROMPTLY at 7.00am so if you are not there you will miss it - it will not wait so set a couple of alarm clocks!
Things to bring on the coach - your running number, a change of clothes, wet-wipes, deodorant, a pack lunch/drink, flask of hot water (I will bring teabags, sugar, milk) a cup, cakes to share (any typ...e I'm not fussy) money - the speedy ones will probably have time for a meal and a drink.
There is a baggage drop at the athletes village, but you can leave things on the coach.
Previously we have all met up at the waterfall by @Bristol for a club finishers photo at 1.30pm before going back to the coach.
The race starts in 'waves', the last wave is at 9.45am, that should give until 1.15pm (3h30m) to complete the race.
We need to remember that the coach driver has a set time for his working day so if you want to stay longer in Bristol then please let me know and make arrangements to get back to Yeovil independently.

We Made the Western??? 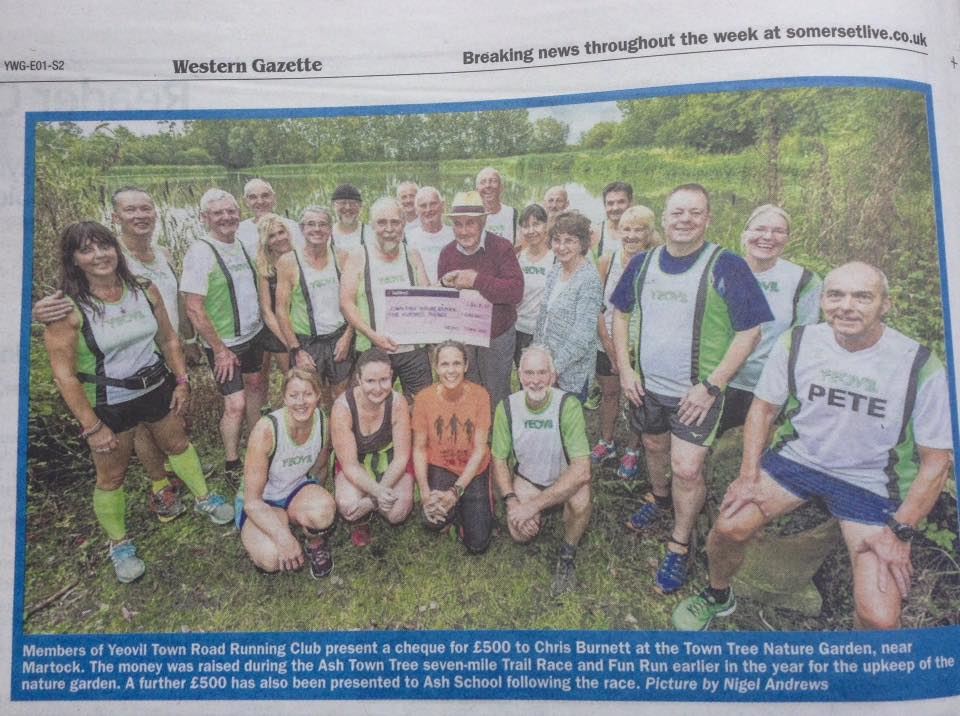 What a fantastic day for the Club today was, really well supported both by runners and helpers. It has to be said a massive thanks goes to Adam Hawkins for the work he does on this and other events throughout the year. He does also have a team to assist him... but we could and should all do more to assist where possible. 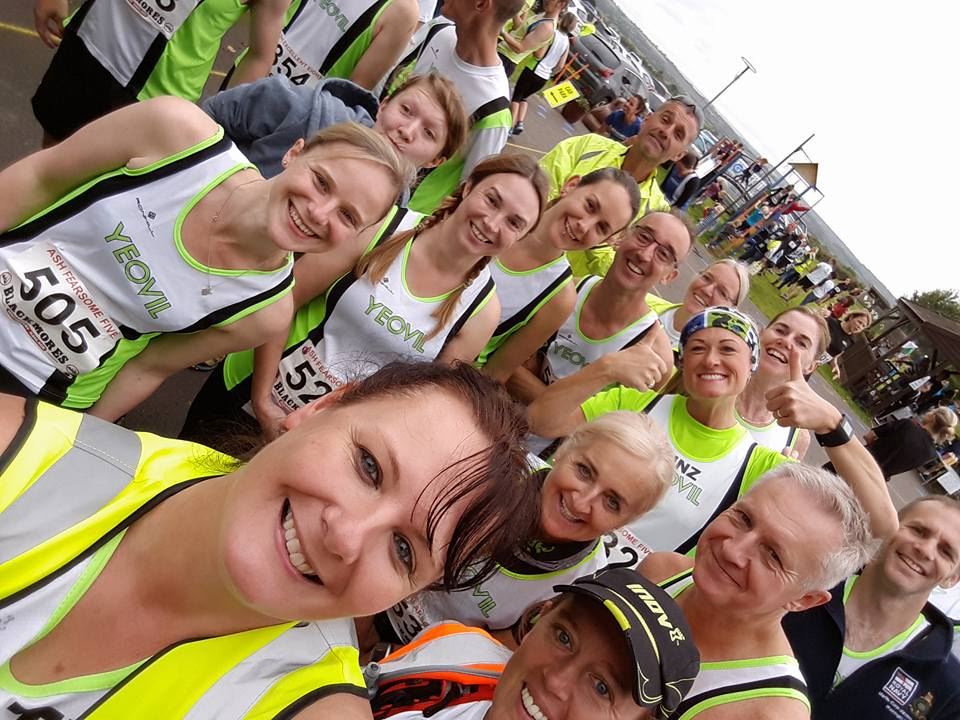 The weather was very good to us considering - no rain during the event. Both the Eight and the Five started together an...d split of.
There was road, trail,track, droves, hills up and down both road and grass and mud and a bit more mud.. Bryn Phillips ran a great race I believe leading for a while finished very creditable 3rd place , Paul Card was first V40 adding Robbie Hawkins and another YTRRC member the male team prize went to Yeovil Town RRC.
Kate Haydon was Third Lady in the 5 mile race and Robert Adams was First Vet Male in the Five mile race ( Thanks to Carer .. I mean Alison Griffiths for bringing him out). Other battles did ensue further down the field . This again was about points and Hats. Matthew Driver AKA Parkbench. . Almost wore Wellingtons. .And Kevin Doherty didn't know what race to enter.
We had Lindsay Saunders Elizabeth Diamond & Lynne Thumpston running today having done a Half Marathon yesterday. Michael Bird was running first event since Yeovil Half , Katie Brooks was Five mile tail runner/sweeper/clearer upper and a whole host of others turned up in support. Great event well doe to runners and helpers. 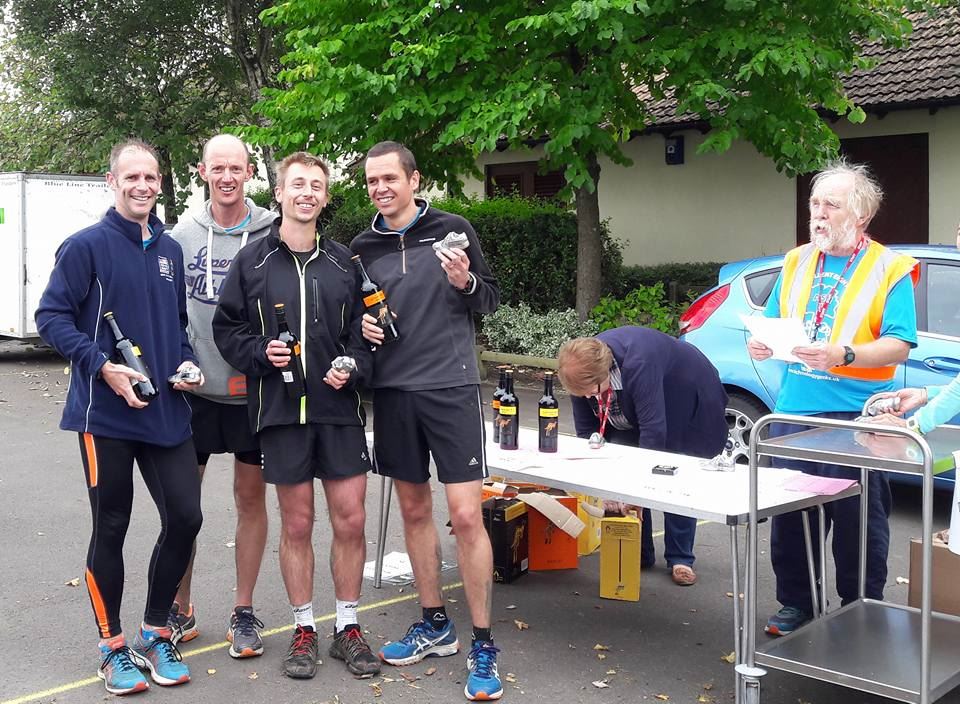 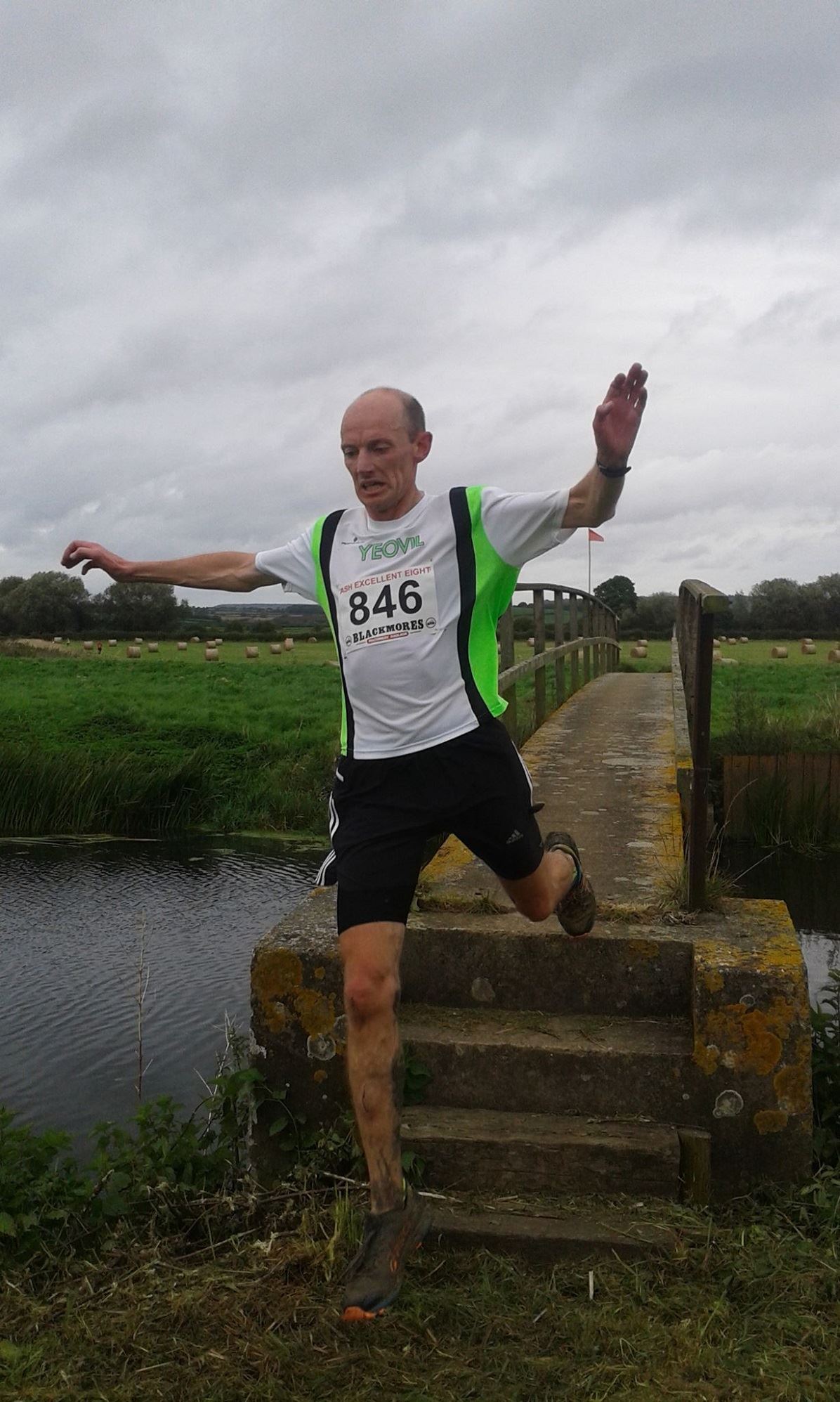 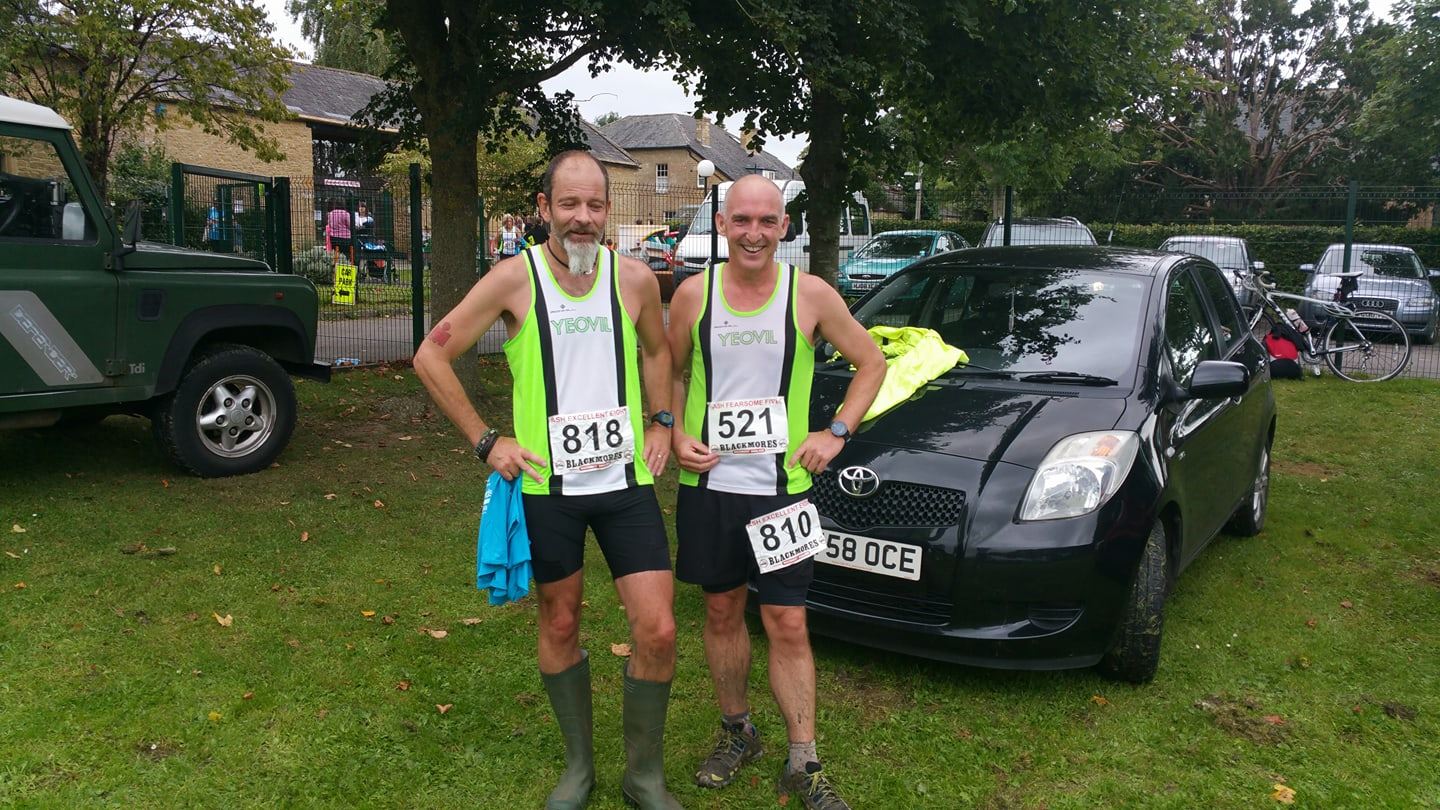 The fight for the points

Today saw the long awaited race between Mo and Jo

Great North Run done in 2:06:21. What an amazing experience - running over the Tyne Bridge just as the Red Arrows flew over. Finished 16,168 which considering over 50,000 ran happy with that. I am buzzing it was amazing from start to finish

The Mad Cow Marathon and Half Marathon

So today was the M\ad Cow Half and Full marathons with a later start of 9am, well for most of us, some went early at 8am. The weather wss overcast with rain due at 2pm, always trust the weather forcast so it rained about 10ish but not for long. We had 3 runners in the Half and it was great to see Kate Harris out again and was performance of the day for the Club. 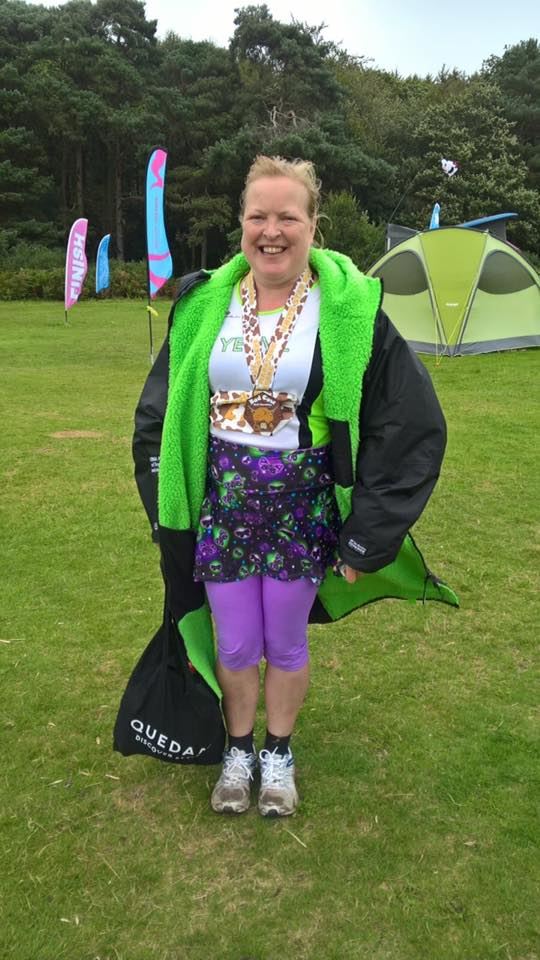 Helen Nesbitt was first over the line for the Club so well done. 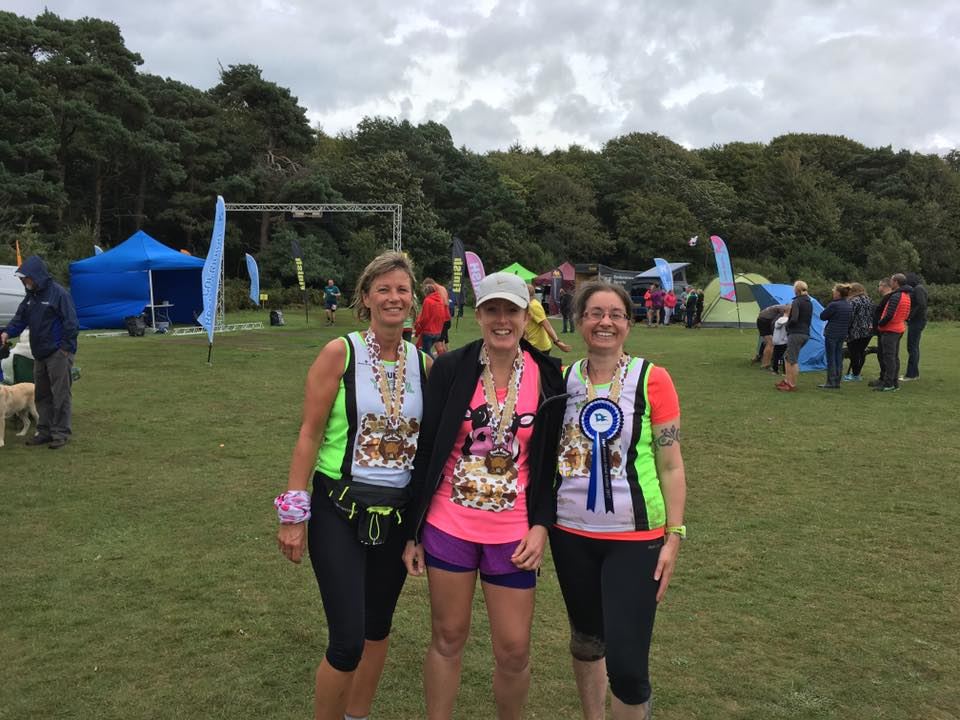 Bad Cow Half Marathon complete, and we all look very pleased with that! Well done Sharon and Louise great running

🏃🏼‍♀️
Happy to have finished in just under 2hrs

😄
Well done to all you other YTRRC who took on the Marathon, good to see you along the way!

In the Marathon we had Fez first over the line for the Club and Anita our first lady. Kev Brettle was on his second marathon and first Trail and WSR event, I ran round with him so he could get abuse for the 26 miles. 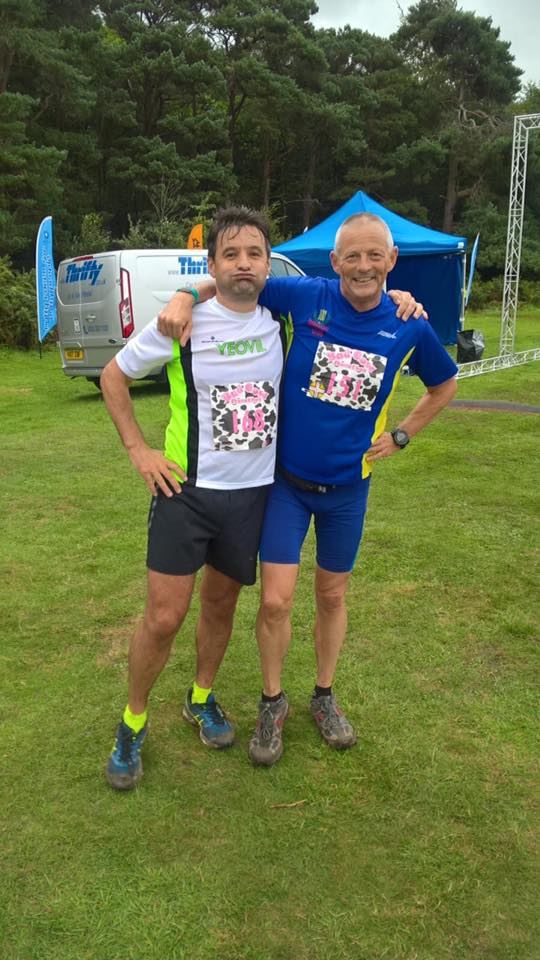 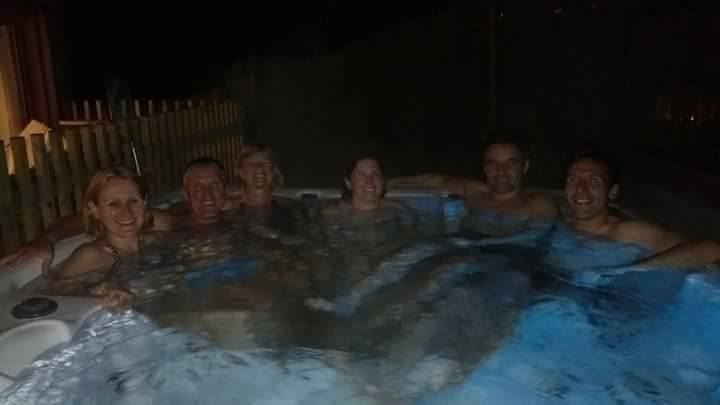 Some of the Photographs

As for ther Results:

Saturday saw the start of the Weekend Mad Cow races, with Saturday having the Frolic starting at 7:30am (thats in the middle of the night). The frolic is either Solo, Pairs or a Team of Four, we had runners in all of these. The day started of on a very quiet moring just before the Rcae Brief by Andy Palmer in the Sun when there was a noisy shout of "I'm here" all the runners looked round and saw.... 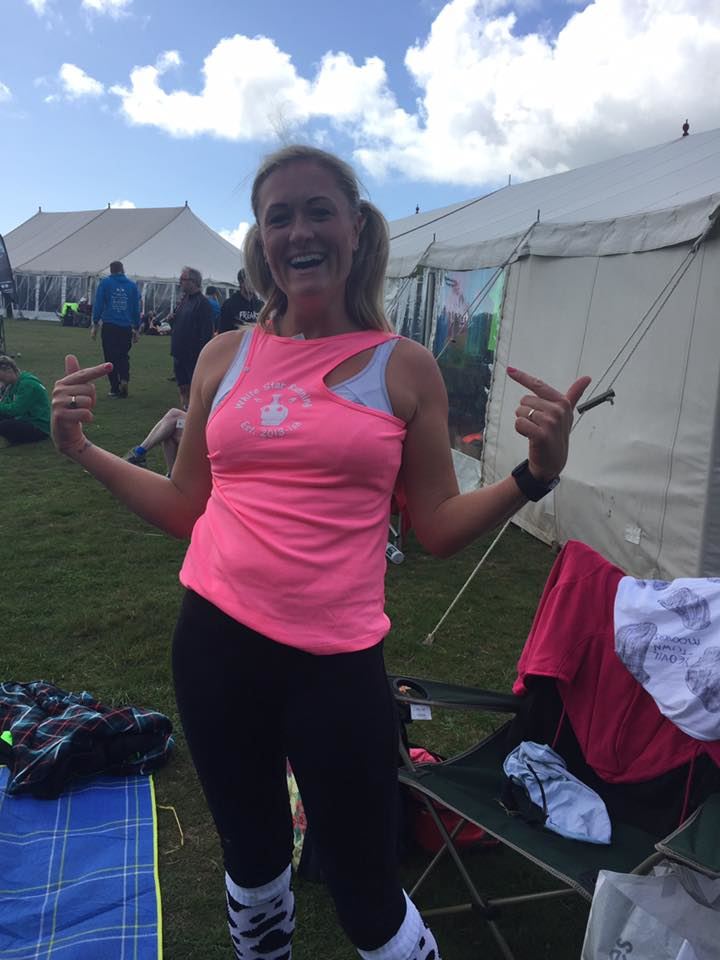 The laps were 4.4 miles ish so 3 for half, 6 for full and so on. So at 7:30 off we went, not sure who went first in the Teams but it was mostly on good tracks nice and wide but some had sand and was hard work on the later laps. As with all WSR events there was the Love Station at about the 2.5 mile point every lap so plenty of food, drink and alcohol. 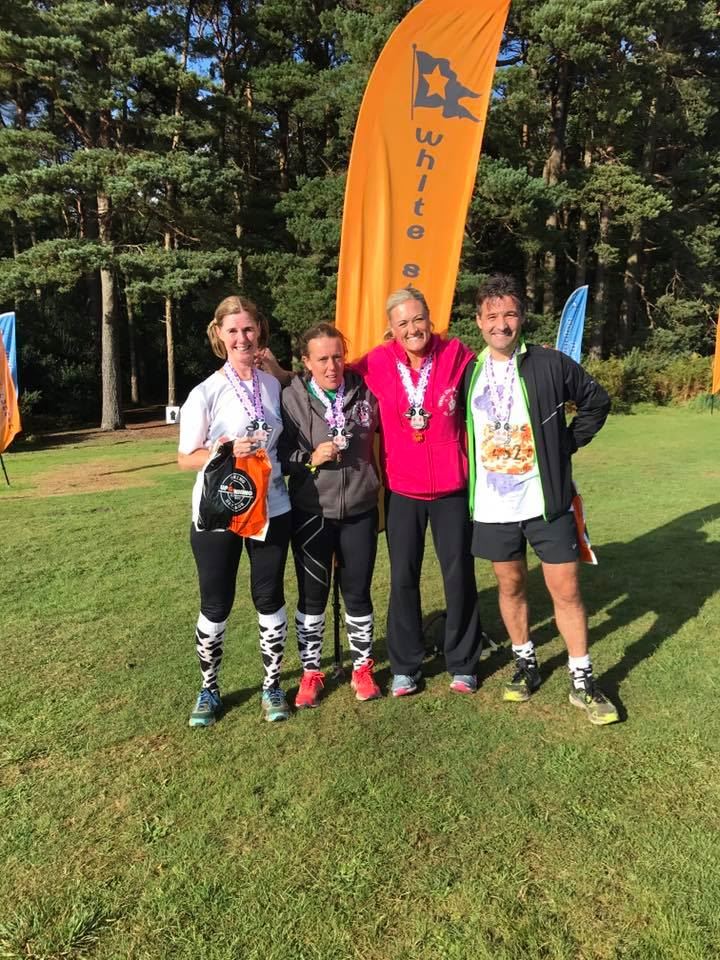 The laps were going Ok but when I was on my last lap Work started on some buildings that slowed me down a bit, workers were building Sand Castles in the middle of the slight hill on the lap. I stopped to ask wtf is going on but just got abuse so I ran on. 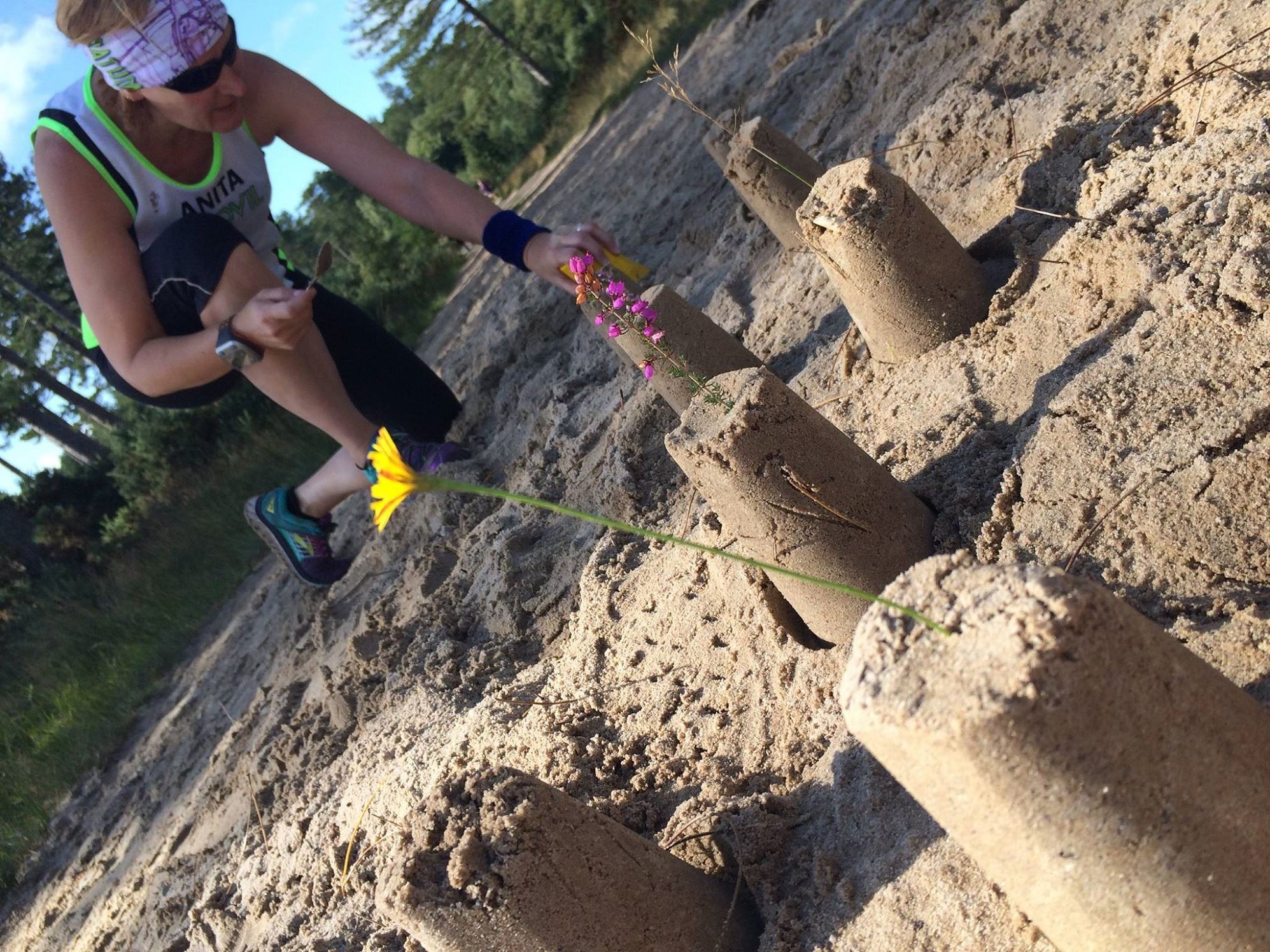 The Teams were doing well and I had to be quiet when I started my second lap as Kev was asleep, I have heard Kev did wake up and managed a lap or two.

Sadly the lovely moring turned into a crap afternoon. 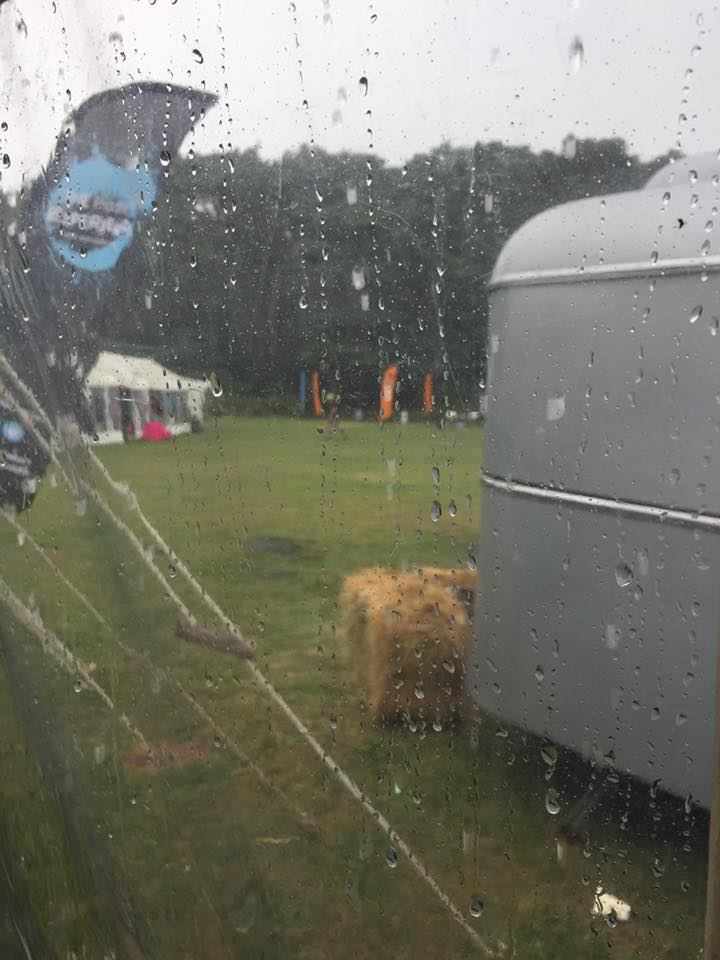 The weather took a turn for the worse and was too much for some.. 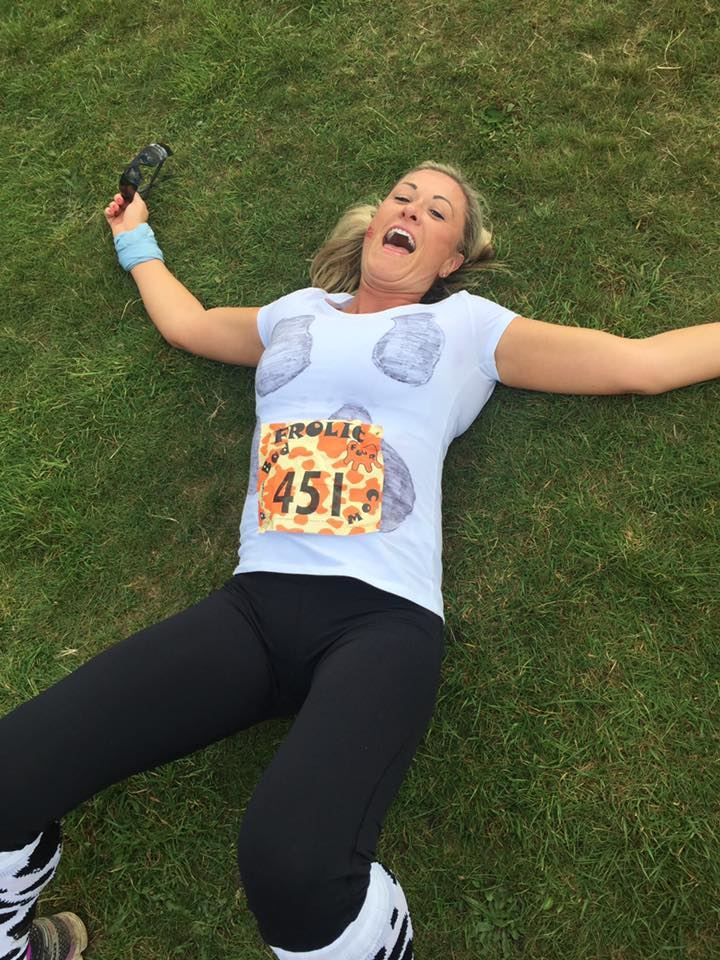 As for the results:

I am not sure of the Team names yet. Also well done to all runners. Just a thought but it would be great to make the Frolic a Club event and put loads of teams in for a Club race/pu/laugh.

Our Yeovil Marathon and Half

I need help with organising the Yeovil Marathon 2018 as well as the new Heron Half. It might seem like ages till June next year but it quickly comes upon us.
I need people to cover the following: Route Master and Chief Marshal, Volunteers Coordinator, Children's Fun Run. These roles are not difficult if started now, if i end up having to do these myself it compromises my ability to promote the Club and Event for sponsorship and runners.

Friday 24th November
Haselbury Mill
Please go to the club website and pay and then book your food choices
Numbers limited to 120 this year....We also need you to Vote, please do here

PUB RUN – NORTH CADBURY (7th September 2017)
The Pub and most of the route tonight were as far as I know new to Pub running. Organised by Trevor, the bigger group tonight set off down the lane opposite the pub. This turned to track and we turned right. I remember green lanes. We came back to the other side of the village and crossed over. Lane turned to track then fields. I remember a series of tracks and right turns. It was most probably the Monarch’s Way. We crossed one roa...d and came to another. Turning left we passed the Manor House at Galhampton, then turned to go down Frog Lane. The route from here was most likely more Monarch’s Way and the Leland Trail. At one point we had a large puddle to get round with stingers on both sides. The light level dropped and fine drizzle moved in. I remember running in a golden field of stubble having poor visibility due to the misty rain. A series of slippery stiles and wooden foot bridges came next. We stopped in the corner of a wet field for a photo shoot. We came back out onto a lane (Sandbrook Lane). The rain got heavier as we ran south to get back to the pub which came up on the left. Thanks to Trevor and the leader (sorry I didn’t get your name), and all. It was good to not know where I was for most of the way. 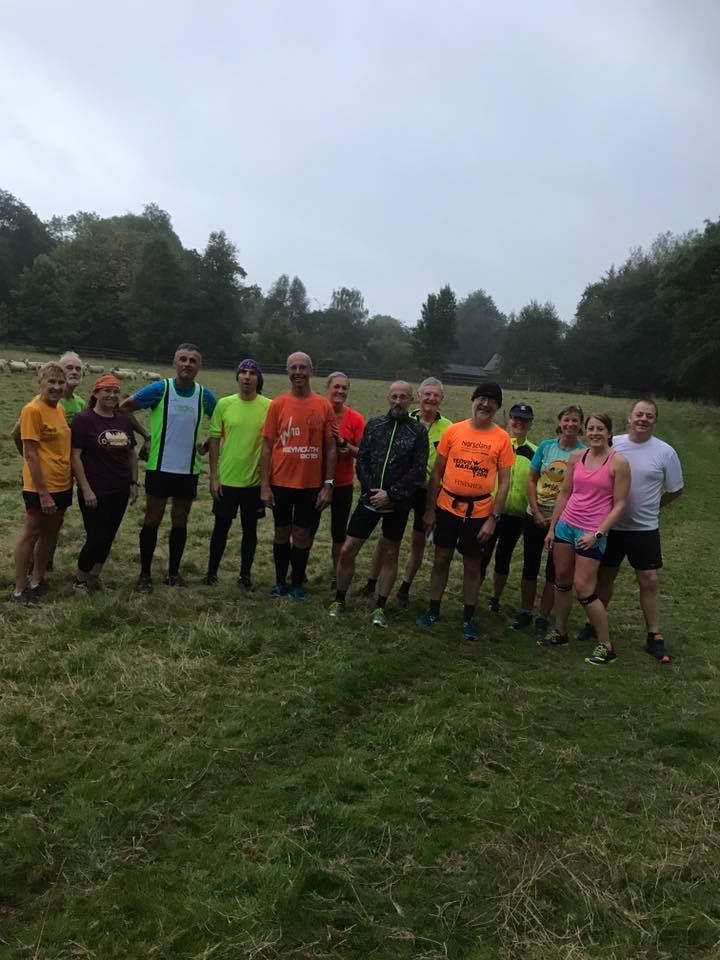 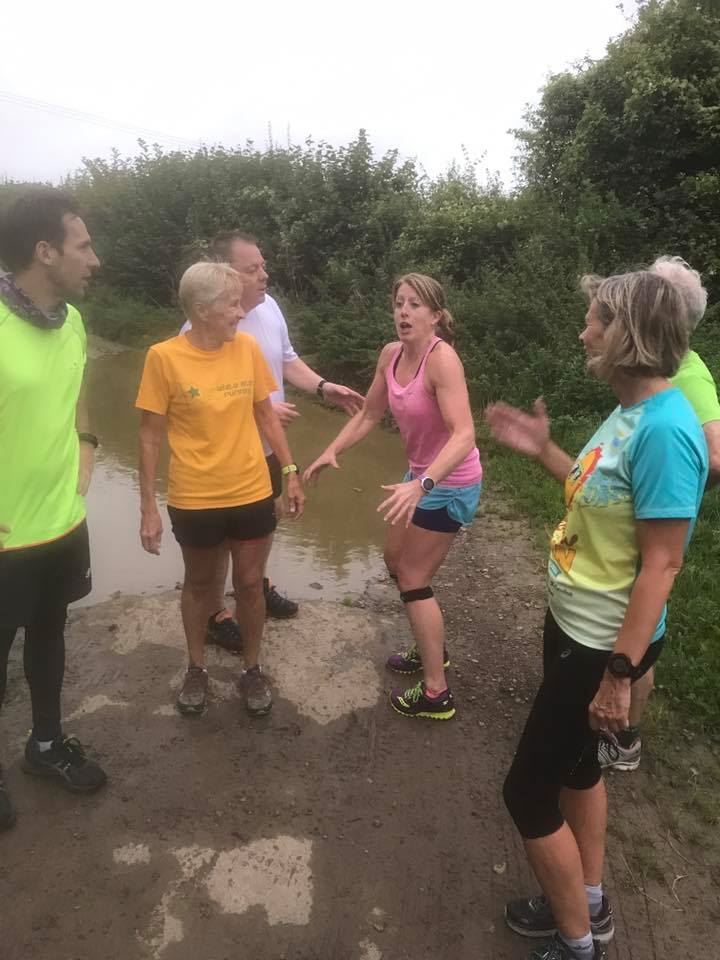