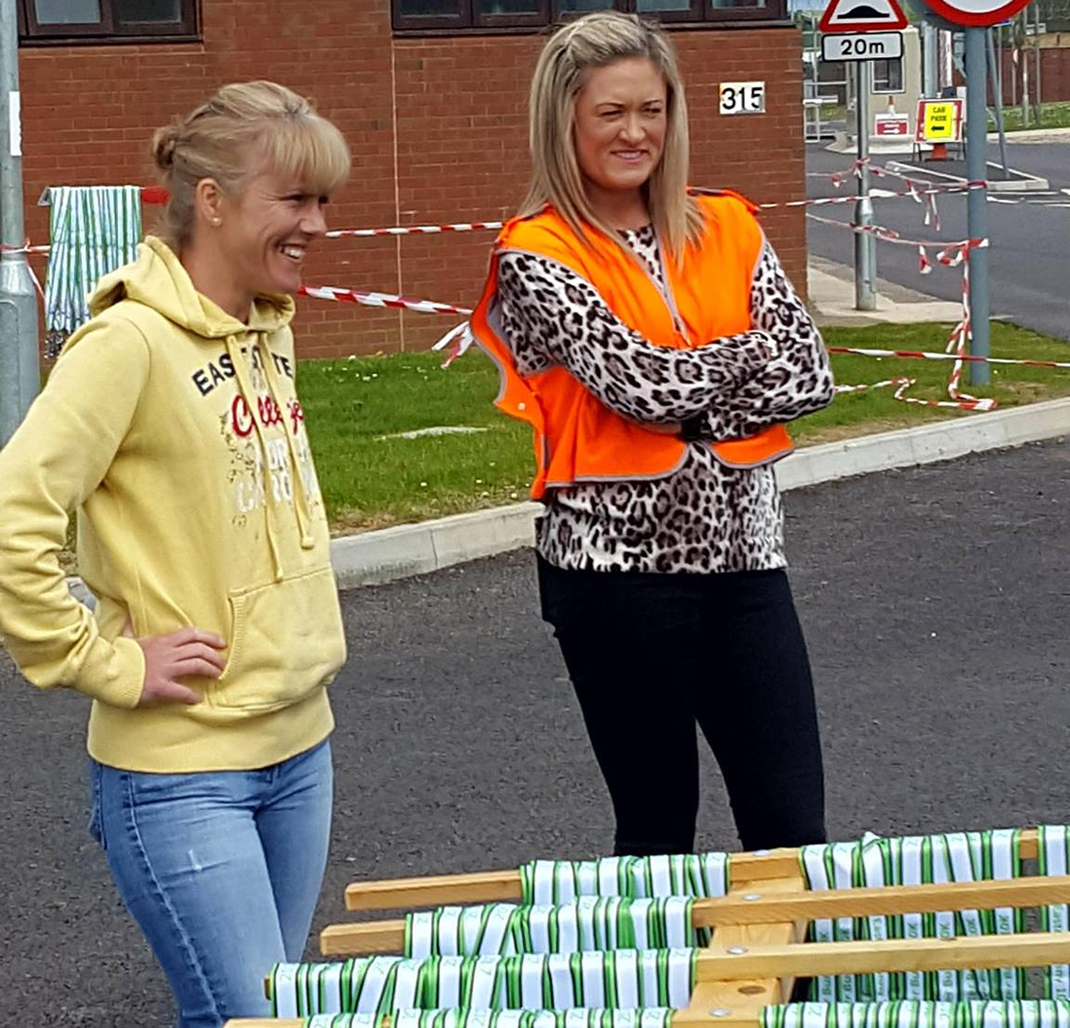 Well, all I can say is what a great day and a superb effort by all those Club Members that helped, ran and also baked cakes for today's Easter Bunny. We had 411 finishers with over 460 entries.
Ok we were once again lucky with the weather as the Hall does not coup with much more than 150. The girls, Mel and Denise did a great job knocking out the Tea's, Coffee and Cakes and those doing the Race Numbers had a busy time from 10 - 10:30 with a rush on those that paid on the day as well.
A slight delay with the start of the race due to numbers in the Fun Run and thanks to Adam for sorting this out.
On the Club front, we had Darrell Sheen first over the line and Kate Hayden was our first Lady. The full results can be seen here.
The only complaint was a few runners getting scared of the Marshals which is a fair point. 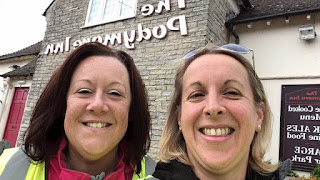 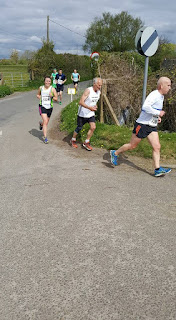 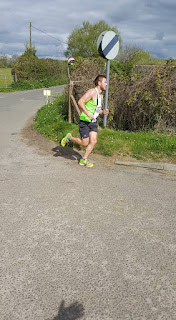 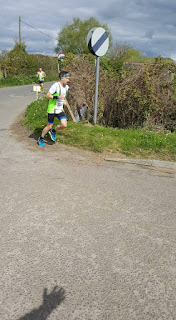 A line from the Race Adjudicator, “very well done, I have spoken with a number of the runners and they have all commented on how well it was organised, the signage and marshals, a great run”.
One runner approached me to say “ the support on the course is brilliant, the marshals are really great, best race I’ve competed in.
So, all marshals, helpers, lead cyclists, numbers allocators, medal handouts, water stop personnel, pacers and our “tea ladies” and anybody, I might have missed (sorry) – give yourselves a big pat on the back because without your support and help we don’t have a race, in fact we wouldn’t have a club, so from Captain Slim and myself – thank you one and all,
The children who helped did a magnificent job, I saw one young lady who insisted each runner gave her a high five before giving out a medal, “might add that in next year”!   They can come again.
I spoke with Paul Card, one of our lead cyclists after the race who was most impressed with the lead runners, he said he wished he had a head cam fixed to his helmet facing the runners.  Perhaps something we could think about next year which could go on our website for all to watch and encourage entries, not that we were short this year.
Another thank you must go to Fullonsport, it worked seamlessly, results as requested on time ready for the presentation.
As for the Fun Run, I believe Adam Hawkins was slightly overwhelmed or should that be over subscribed with children for his race.  I do owe him an apology as he was just leaving the Pavilion when I started the main race, causing him to do his sprint at the start, not at the finish.
For me it’s time to fill out the official paperwork as required by RunBritian (already received their email), I did consider giving it to Guy to complete but it would probably get splashed as he frolicked in his Hot Tub.
From Mel:
Thank you all those who donated such lovely cakes today & to those that donated to eat them We have, after expenses, taken a brilliant sum of £308.90 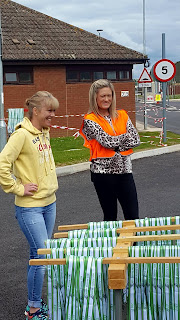 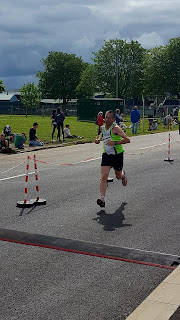 From Anita:
Easter Sunday morning run from Yeovilton, a nice flat route and great weather, lovely company so the time went by quickly which was good as I miscalculated and it ended up as 12 miles - Sarah add extra on at the end to do around 18 miles. Lynne Thumpston, Emily Wharton, Frances Swatridge, Kimberly Lonsdale, Sarah House, Mark and me 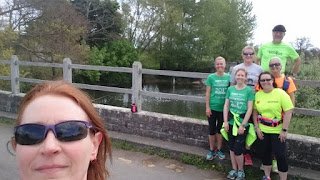 SUNDAY TAPER RUN
The process of tapering down from longer distances continued this morning. Anita's group of 7 set off from the Yeovilton camp at just after 9 o clock. Most training for either London or NDVM. Most of us doing one lap of the Yeovil Marathon course but missing out Podimore and going in the opposite direction (clockwise). It was nice to be out on those country lanes, but without the sunshine, the cold wind made it feel like winter again. The total distance was 12 miles. It was two months ago there was a similar but longer run from the camp running anti-clockwise. Thanks all.
SHERBORNE PUB RUN
The run from the Teddy Rowe tonight was Multi-Terrain. We started out, running along Lenthay road and went onto the common. With a big bright sun, low down ahead we continued along fields until we reached Keepers Cottage. I don't know what they keep there, but it looked o.k. We went up a track taking us to the Bradford road. Turning right we headed to Silverlake cottages and took the lane up to the dual carriageway. Carefully crossing over we went down into Stallen. A steep climb up a track took us to Ratleigh lane. It levelled out and we ran along the top. A right turn got us descending gently as we ran along Trent Path Lane. We came out at the traffic lights and ran down Horsecastles lane back to the pub. Total distance 419 mm on the map or 6.55 miles (one mile = 64 mm). Thanks everyone for running.

From Steve Lye:
In search of a 10 mile run for my hat, I ran the Chippenham 10 miler on good Friday morning. A fairly flat course and I was pretty pleased with my time.  The Easter egg has replenished the calories expended and was scoffed before I got back home!  Hopefully, the legs will have recovered in time for the Easter Bunny and good luck to all on Monday. 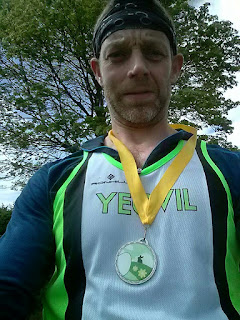 Thanks to the all those that helped on Wednesday evening for our first 5k, it was a cold evening but we did great with 183 runners, the Fun Run and great support. We have had some excellent feedback as well. The Race Director Dave Standfield did a great job, only 5 to go... Well done all.

A very very big Thank You to everyone that made/donated cakes for the 5K on Wednesday. With your efforts, we made just over £100, which goes towards club funds.
We need your help again for The Easter Bunny on Monday, please.
Don't forget we can reimburse you for ingredients if you wish. Just ask me.

Good Friday saw the Championship Race Kilmington Kanter with a few Green and Whites taking part. This in from Matt:


It was a slightly cloudy morning with stratocumulus building from the west as the YTRRC Awesome Eight gathered at the rather picturesque village of Kilmington for the annual running of the Kanter. Seven miles, two hills, one bog, one railway bridge, one lap of the school field and a shed load of banter. The hooter blasted and we all set off with the sound of Jo Henley's phone ringing in our ears (she was "on call" so was hot-desking all the way round - it's SO important she has two phones!). Corinne Hawkins felt she had been lied to "a flat 10k" was NOT the correct description! Meanwhile, Kev Doherty led the way up the first hill with Matt puffing like he'd been on a pub run the night before! The other side of the hill looked good - it was downhill - but the marshalls were already setting up the return loop bollards (a word later used by Adam Hawkins to describe how he felt afterwards). The riverside fields should have been nice running, but the long grass was slippery for those in road shoes (it's not like we're experienced runners after all!). The return hill beckoned and the welcome sight of slurry-laden tractors gladdened our hearts. Matt was creeping closer to an unaware Kev, while Daz Swithenbank was beginning to struggle with a knee injury. but since the marshall could only offer water, not the needed carry home, he ploughed on and toughed it out. Richard "another 10k done" Dodge was merrily sauntering around enjoying the sun. Finally the last downhill towards the village and Matt took advantage of his recent mudbath running experience and swept Kev aside to the congratulatory sound of "You F.. and I didn't catch the rest". Emma Machen tactically used Corinne to pace carefully round the course and was among the rest of us who were pleased to find it was NOT a lap of the playing field upon return, but straight into the finish!!! They'd sold out of cakes by the time we all finished so we'll be members of YTRRC for many years to come to try and improve our speed! Results at ... here 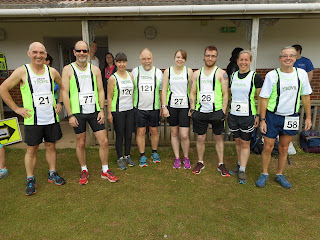 From Kevin:
A Small posse of Green and Whites ventured across the border and into Devon the hunting ground of The Axe Valley runners - The event was Kilmington Kanter MT race - and a club Championship event.
Great atmosphere and weather and some friendly banter before the claxon sent us off on our way.
First 1-2 miles was a mixture of lanes and trails with a pretty steep incline, tree roots and muddy areas to boot,
Through open fields several stiles ( at about 5 miles a sneaky glance put Matt Driver about 100 plus yards behind me) suddenly we arrived at a stoney track which just seemed to go vertically up to the high heavens - most people were walking up this with a periodic jog of a few steps - this must have gone on for 500-600 metres or more. (As I gasped for air at the summit I've got Matt Driver breathing down my neck.. expletives were exchanged in a nice way!!) The final mile and a half were mixture of narrow fast downhill stoney wet track (Matt Driver overtook me down here like a Banzai Kamikaze) then onto lanes for flat section then steep hundred yards to entrance of Cricket field and the finish.
Well done Matt Driver first Yeovil Town rrc member home, Kevin Doherty second Yeovil Town RRC member home with Richard Dodge third ( and another of his 10k a day runs done).
Jo Henley is ultra skilled and proved that women are superior to men and better at multi-tasking - she took 2 phones with her dealt with  work related
Calls while running and still bagged max championship points to add to her tally ... First Yeovil Town RRC lady home .. good day at the office.
Well done also goes to Adam, Daz, Corrine and Emma too.Adam signed Corrine up saying " it's flat 10k" !!  and Daz realises when Emma sign's them up to a race there is going to be a level of discomfort at some point!!