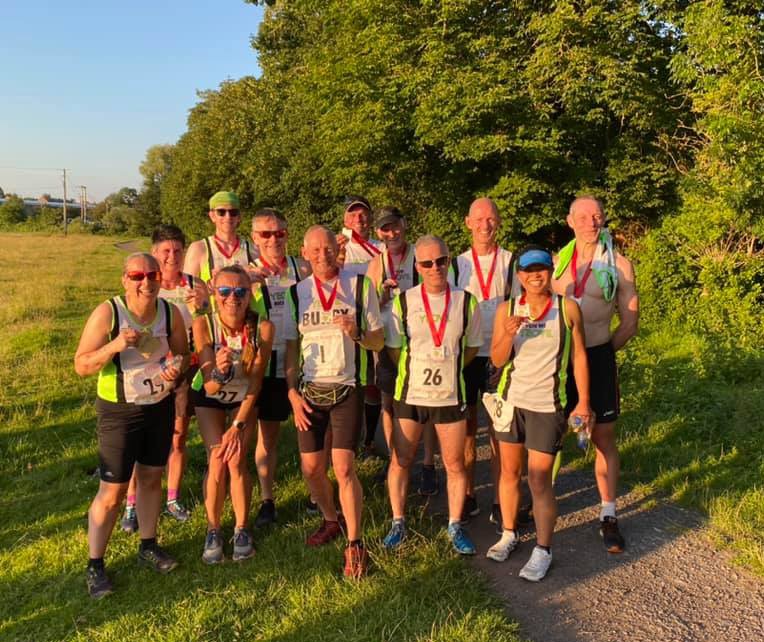 Thursday saw 12 Club members split into two teams for the first Parrett Trail Race, it was a lovely hoy summer evening with a 7 pm start. There were two starts with 5 minutes between, YTRRC Team One was on the first wave and the leaders took the wrong route with bad signing on a gate and about 10 runners were one side and the rest on the other. At the finish it was still hot as we waited for the last few runners to cross the line and then the wait to find out if ant of our teams has won prize. Team One came second but Mags in Team Two was the fastest Lady so well done Mags and thanks to Graham for organising the YTRRC teams. 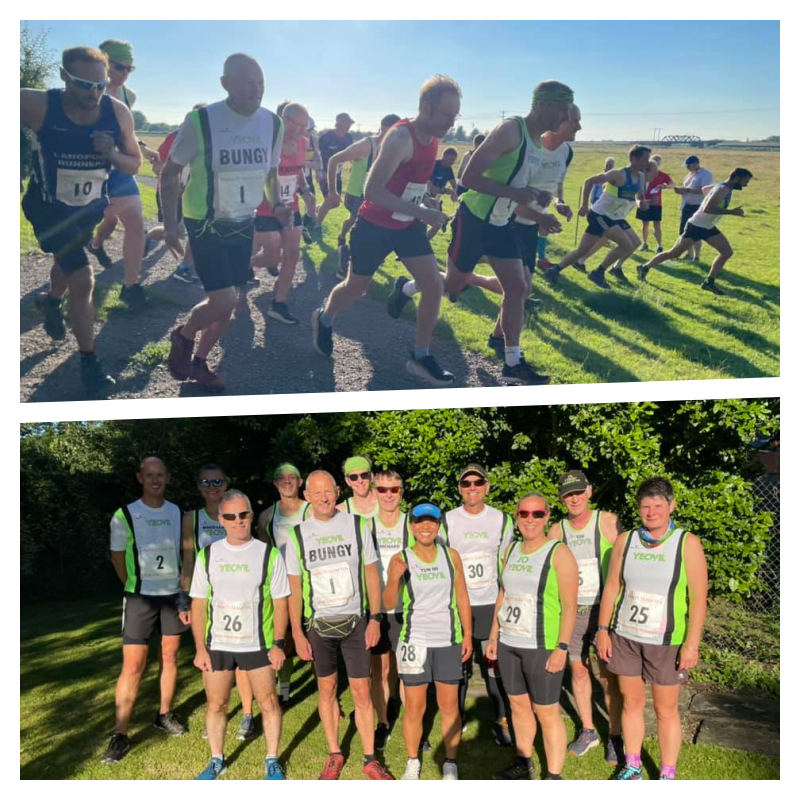 Well the latest of Kev's challenges and probably the hardest and hottest, a various way of achieving this either a week, three days or one day and either 31k or 31 miles.

From Bungy:  Steve Lye, Rob Adams and I decided to run from Lyme back to Ham Hill, Ally gave us a lift down to Lime and about 9:30 the three of us set off. It was already hot and we carried plenty of water. Steve and I both had the route on our watches but we still managed to go wrong in a few places, the route is badly marked for a major Walking Route. We made are way up to Lamberts Castle and without a cloud in sight the view was amazing, we then came down from there across the road and made are way on the trail, we then passed a Farm and I saw a sign saying Pub Open, live music 12 to 5, we went pass but then I thought let just have a look. A great place and so good to see a Farmer making some dosh with food tables, served at your table and contact payment, so a Lemonade and a Pint of Cider we cracked on. 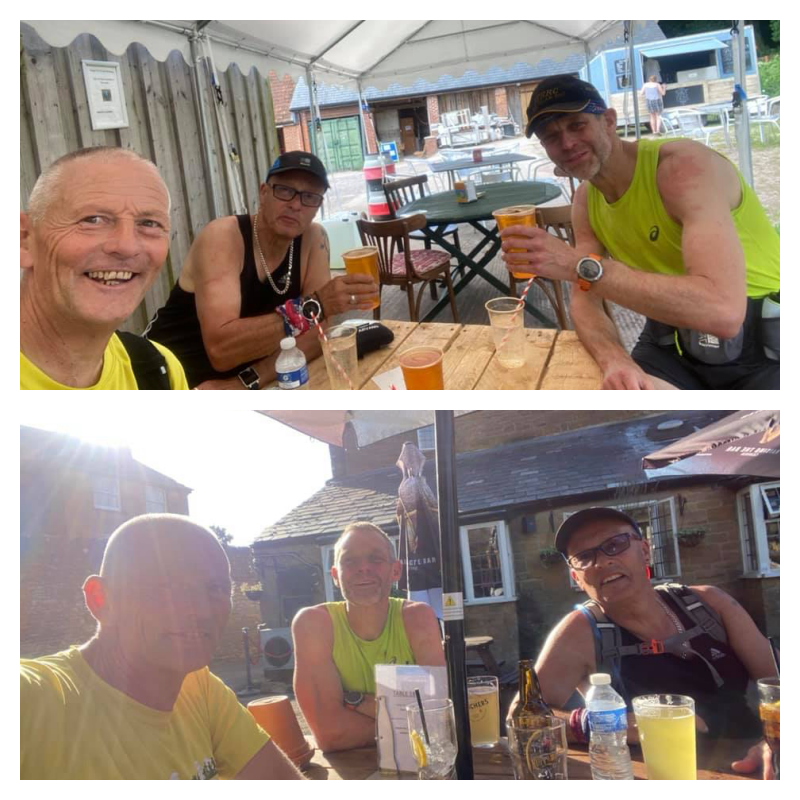 We passed a Camp site and managed to top up all our water but it was getting hotter and hotter, we were 3 miles from the Muddled Man and nearly out of water, we just hoped the Pub was open as we all needed liquid, we came down the hill saw the Pub Garden and bingo it was open, so a Coke and a Cider and we were ready for the last 3 miles, we decided to go to Stoke instead of the busy Ham Hill and finished at the Fleur de Lis for a well deserved pint and a bowl of Chips 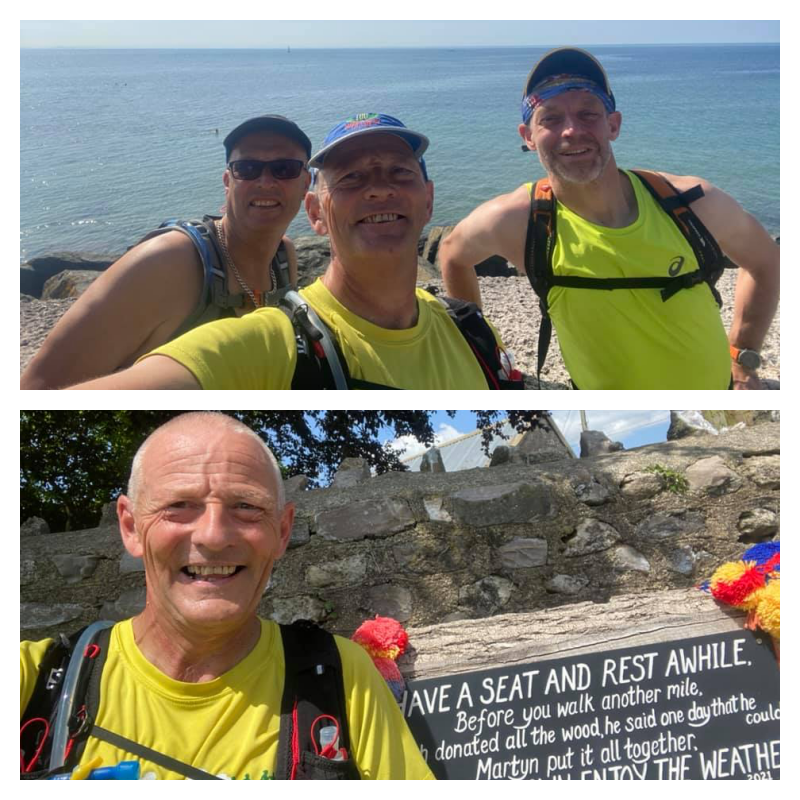 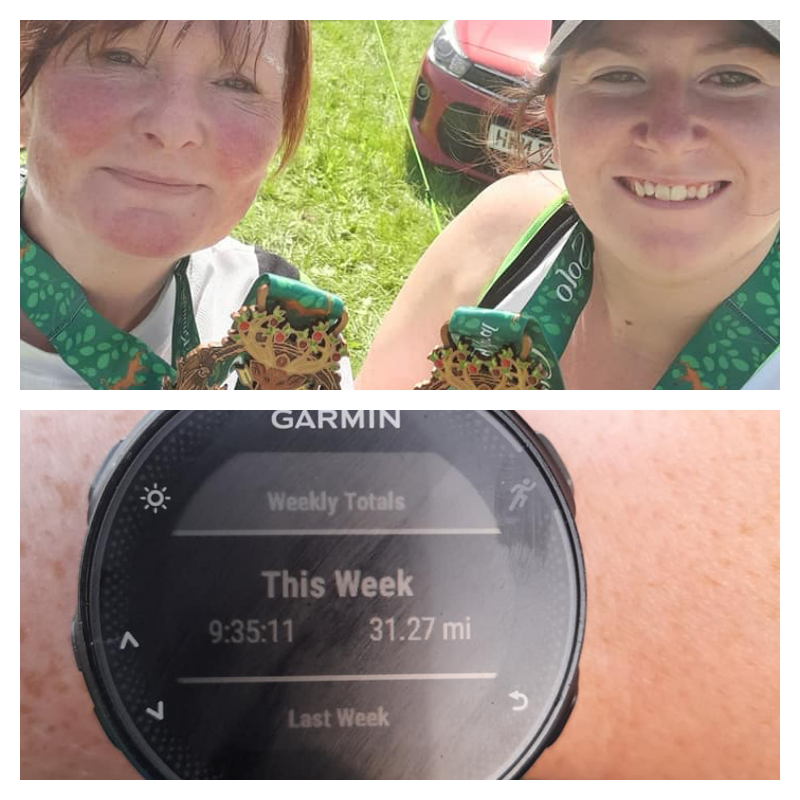 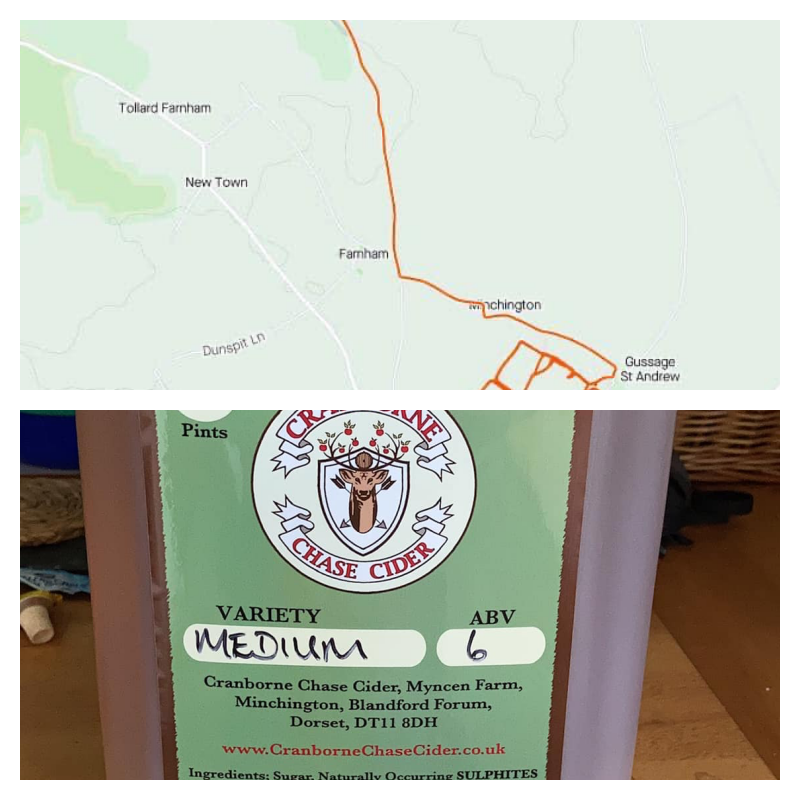 From Anita: The things we do for a Kevin Doherty challenge. 31 miles in a day, all be it in 2 parts. 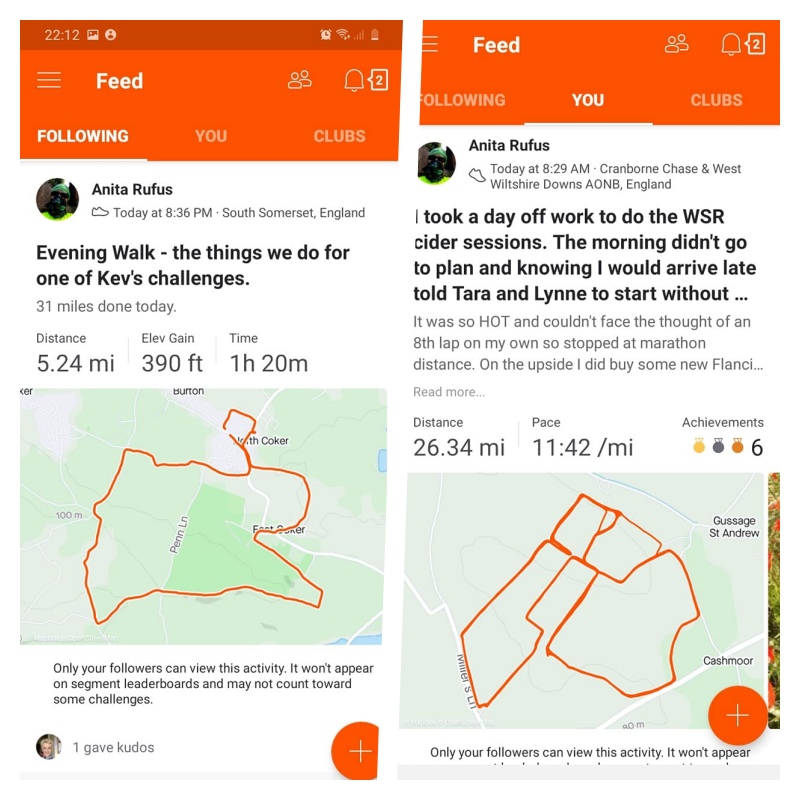 From Marie: YTRRC 31 mile challenge. Completed 31 miles in 5 runs. Thanks Kevin Doherty for another challenge 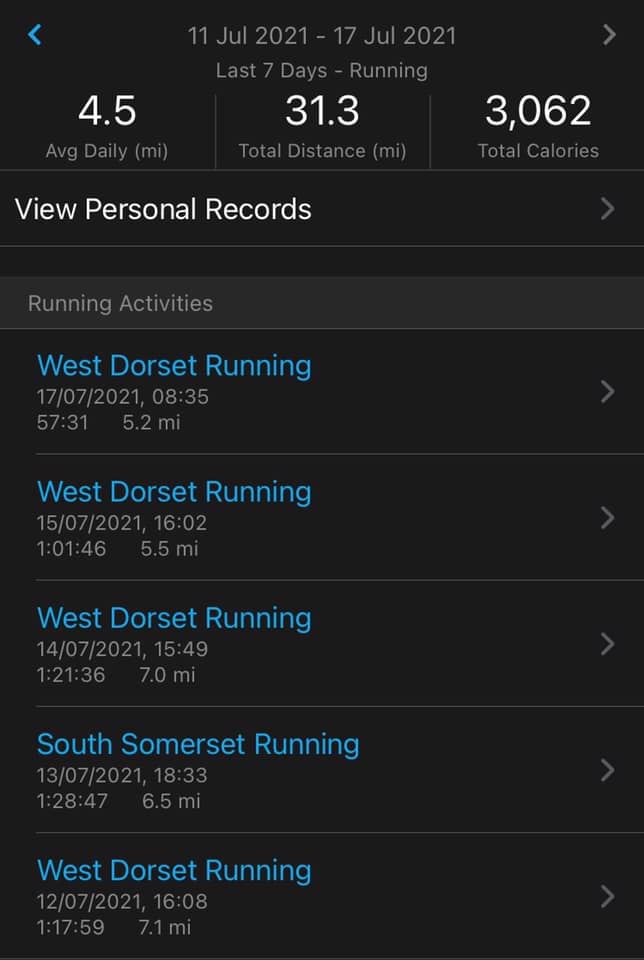 From Anita and June:  What a day to choose to do the 31k in a day for Kev’s challenge! June & I set off with everyone else at 0740. After a week of lockdown it was great to get out and stretch the legs but oh my goodness was it hot! Thanks Kevin for the inspiration! 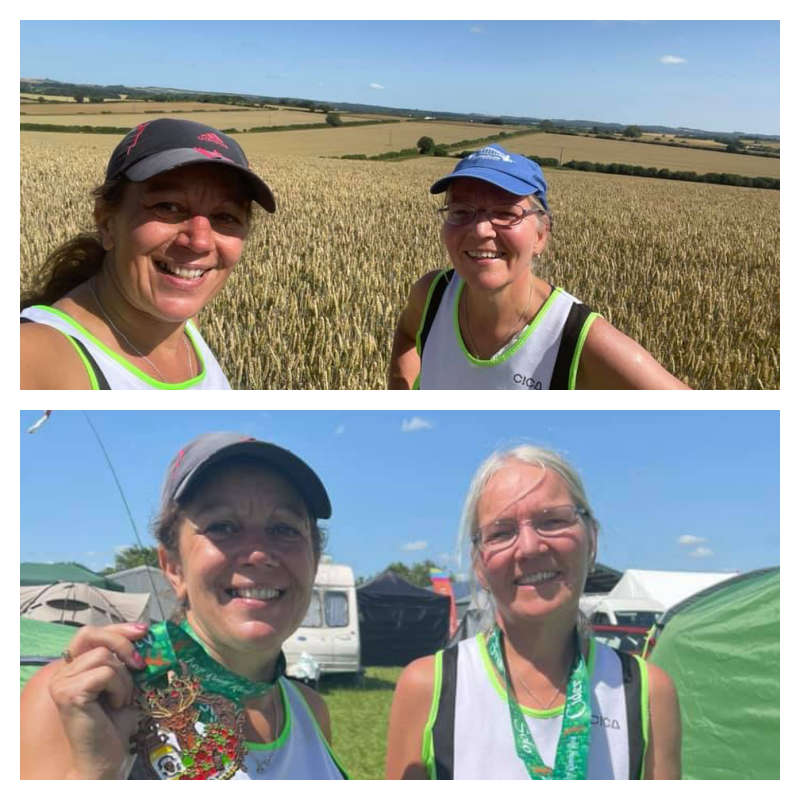 From Dave: Nelson Mandela's 31 miles in 7 days challenge all done thank you Kevin Doherty for arranging all of these challenges

From Matt:   It comes to something when you are ready to report and congratulate Marie Lockwood on being the YTRRC 15th finisher on completing the South West Coast Path, only to find she's just posted completing her Kevin Doherty 31 mile challenge too! Wow! Meanwhile, among the rest of us mortals, I've clearly caught out some people by reverting to a Saturday (otherwise, honestly lost track of days of the week at the moment) as we have a few non movers today...but let's face it, the F1 Sprint was pointless and boring!

So... non movers Tristram Clark, Lauren Jessica, Sara Driver, Angela Claire and Kat Hurford, begin my report. Next, Shaun Powell has put in a good week of mileage to leap well ahead of me! I'm on 381.4 at an address of Butts Point, Crumplehorn (I kid you not!)...apparently its near Polperro, which IS nice! As I say, Shaun Powell is further on and at Plymouth on 411.26! Casper Harvey is another non-mover, but on 426, he's not doing bad, although Natasha Turner has skipped past him and at 434.97 is at Wyscombe Beach. That's not too far from Martin Alderman, who, although a non-mover is on 440.74 and at South Milton Sands. Nichola Chesterton is at Bolberry Down on 444.93, and then there is a bit of a gap to Mel Cox and Rachael Gosney who are battling it out on 484.4 Brixham, and 488.03 Paignton, respectively!

Nat Robins is a little further on again, at Torquay on 492.56, and then it's into the 500's! Claire Shucksmith is on the flat promenade at Sidmouth on 524.84 which is nice...whereas poor Donna Reeves is slogging her way up the hill at Golden Cap on 547.86...I'm not jealous of that! Although, perhaps worse, Louise Ward is on the shingle that is Chesil Beach which is really difficult to run on, and at 558.26 is at West Bexington! Unfortunately, both our new leaders Adam Hawkins and Anita Garrett are, as yet, non-movers from their 583 totals of last week and still in Fortuneswell, Portland. We will await Donna Reeves's mod-week report to see whether Adam or Anita have surged ahead and who is most likely to be out fifteenth winner! 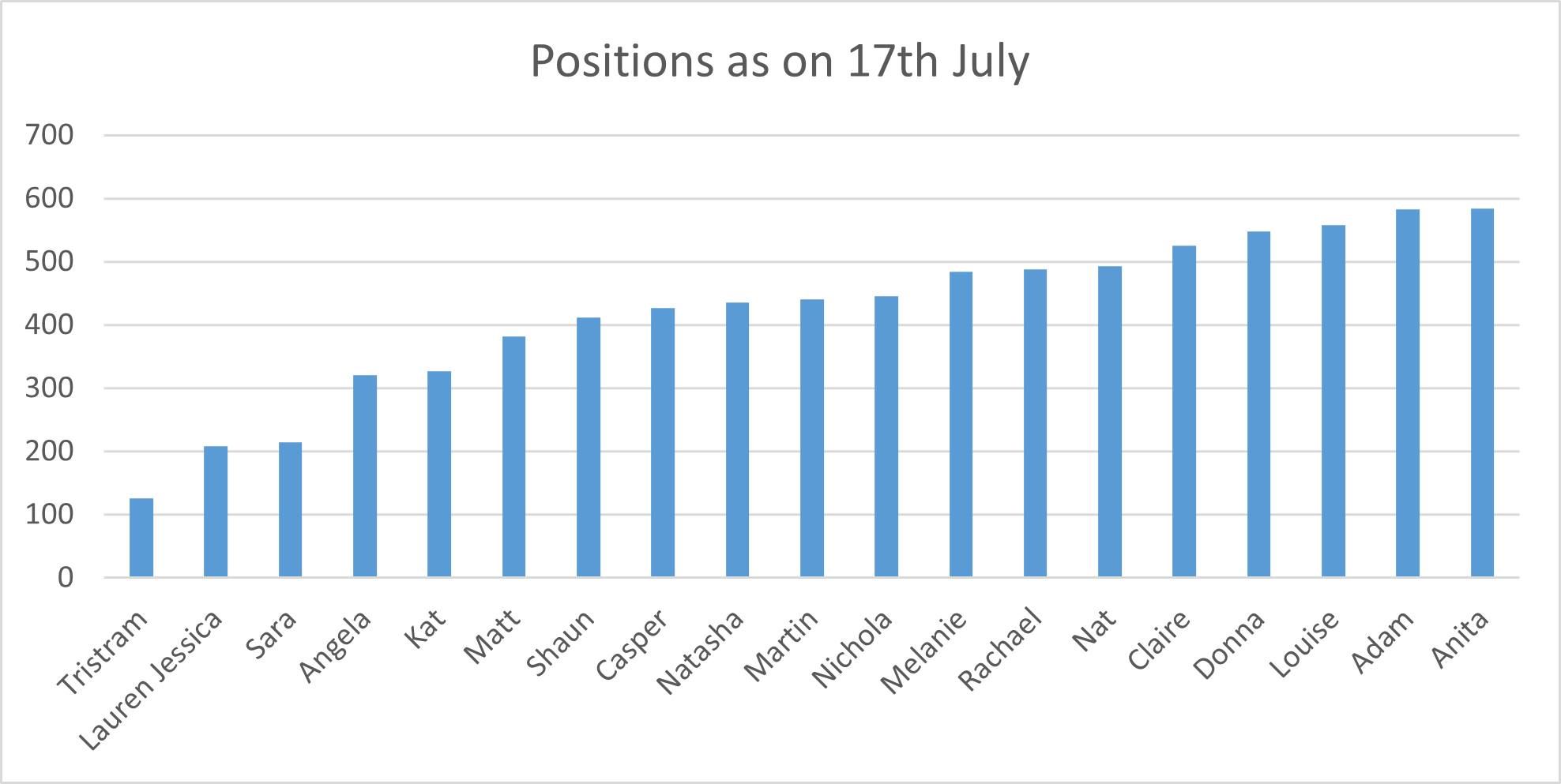 From Anita G: An amazing weekend with these guys! It’s been a couple of years coming but well worth the wait. I think we have all missed these events so much. We even got the guys to do the dishes!! Just a little reminder that Yeovil Town RRC are THE BEST 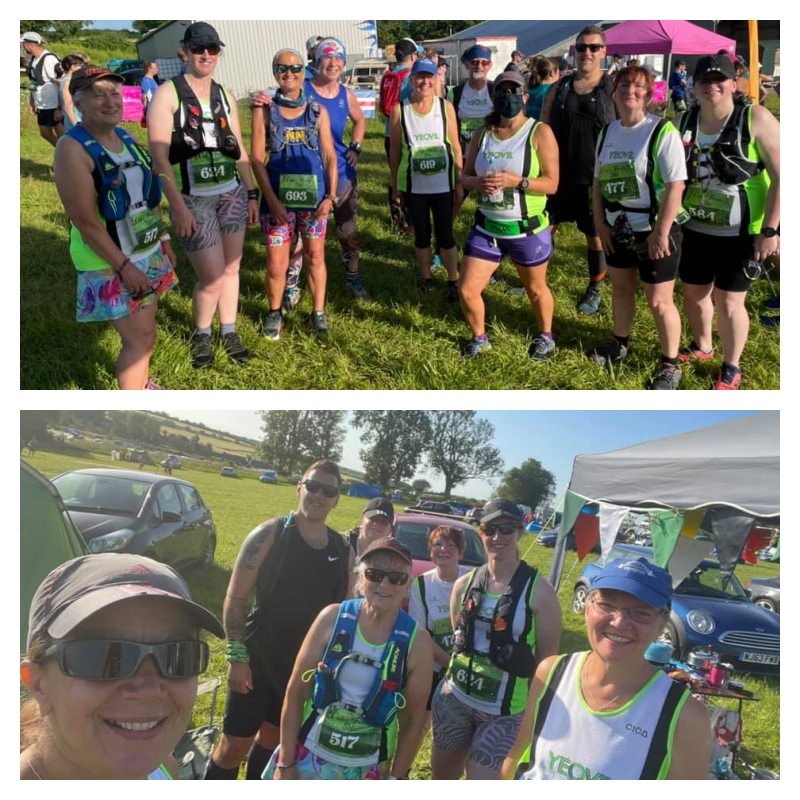 From Marathon Mike:  At last we could resume our marathon schedule following a long break due to covid. Events over here started up again quite a while ago but not in the States we needed. Eventually an option arose in Pennsylvania so we hopped on a plane for a couple of hours to Harrisburg, the State Capital and then to York, a city with a population of about 40,000. Pennsylvania still has a lot of covid restrictions, unlike Florida which has been mostly open since last summer, so we had to get used to masks and social distancing all over again.

The race was organized by the local YMCA, and thankfully they didn’t play the song, which together with Neil Diamond’s “Caroline” are high on my musical dislikes. Covid restrictions were in place, the marathon and half were capped at 400 runners each; there was no pre-race expo nor after-race party or presentation of awards. The marathon start was staggered between 6:00 am and 8:30, with 25 runners allocated to 10 minute time slots going off in ones and twos. We had the 6:50-7:00 window; I ran through the start gate alone and could see about a quarter mile down the street, only one other runner was in view, quite a strange experience. We ran in the city streets for about half a mile and then joined a disused rail track, The Heritage Rail Trail. It was an out and back in the countryside, the first couple of miles on asphalt with the remainder on crushed limestone. The area is in the Allegheny Mountains and quite scenic; the trail is partly under tree cover, some in the open, runs alongside rivers, over bridges, through old stations and passes through a tunnel. Old locomotives run at holidays and weekends for steam enthusiasts, but it was quiet on race-day.

Water, Gatorade and gels were available every 1.5 miles. The weather was perfect, dry, no sun, temp around 10-ish at the start, 20-ish at the end. With the staggered start there were always runners in view, mostly overtaking me or on their way back, but it made the last 4 miles to the turnaround seem like forever. Unfortunately my hydration gremlins struck again around 21 miles and my calves locked solid despite drinking lots of water and electrolytes at every opportunity. So there was a bit of walking near the end, I finished in an ugly time with a very sore knee, but still got 2nd in AG. We were given TEA at the finish (ICED, I wonder what Phil would say to that) and a paper bag with sandwiches and snacks. So that was marathon #60 for me, State number 32, 18 to go (maybe), then I’m done (maybe). 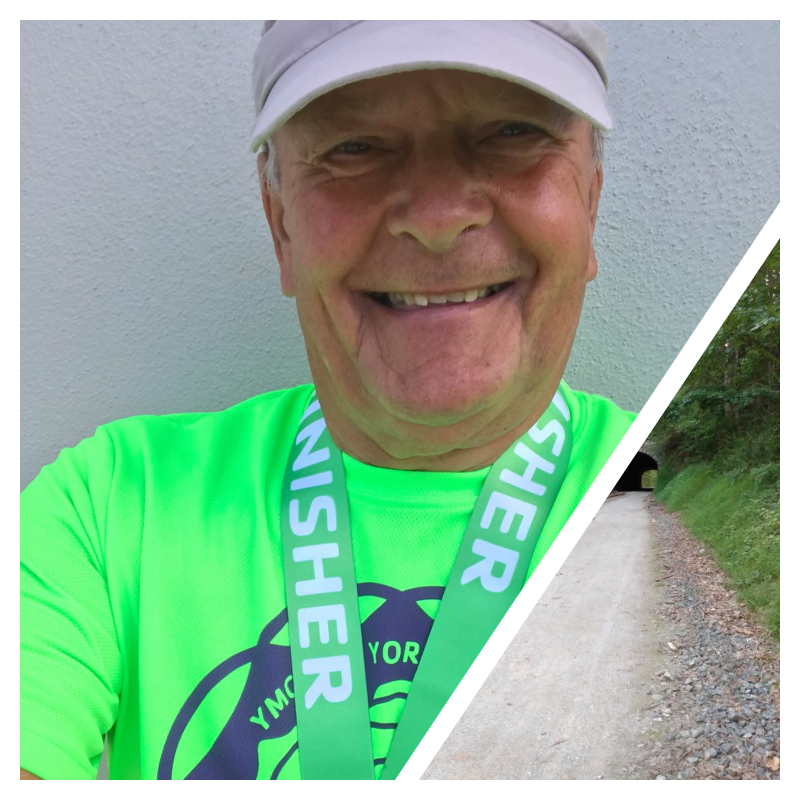