A Day out at Longleat 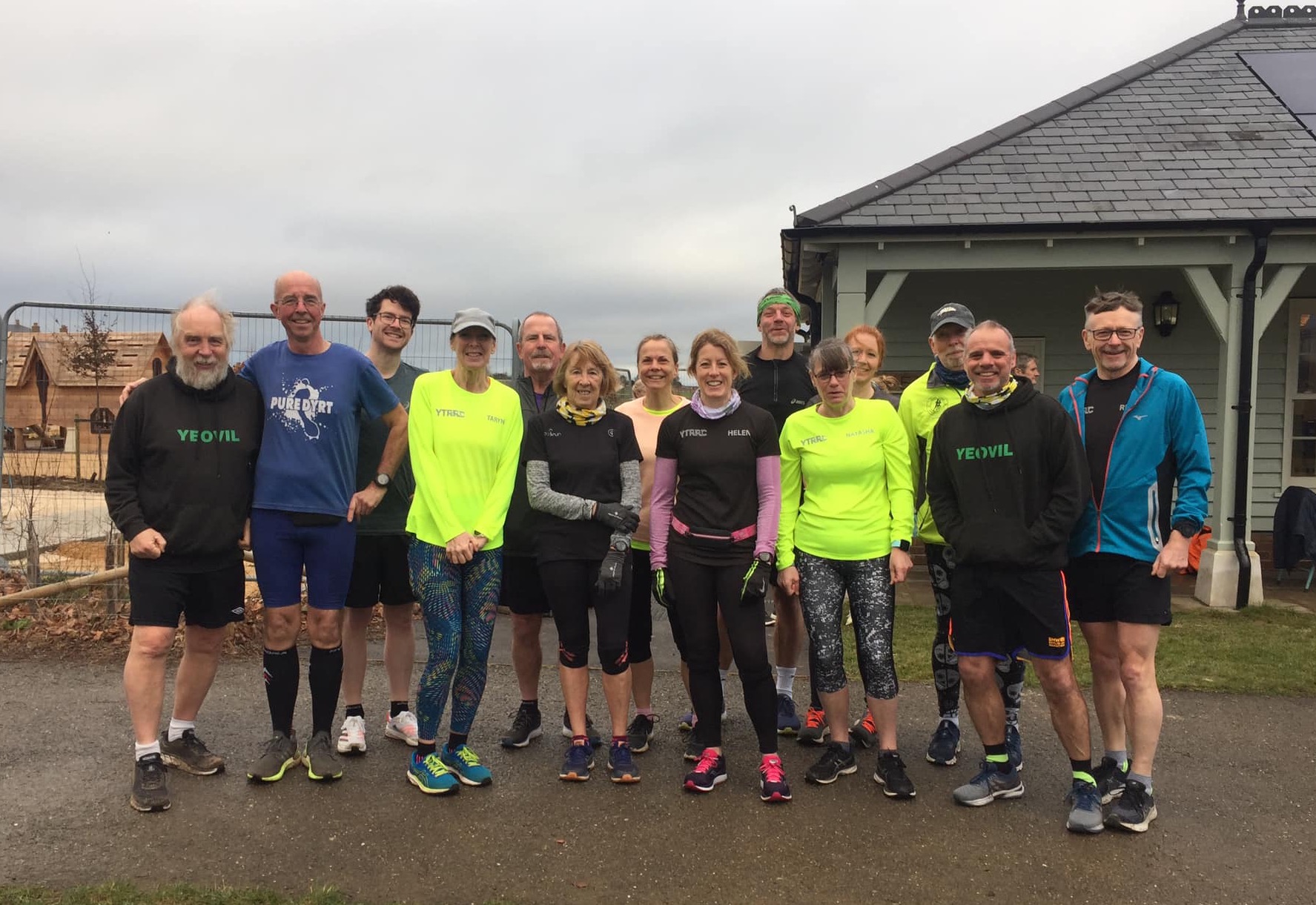 From June: Good day out (despite having to get up at 4am!) to Sawbridgeworth for the Hop-a-thon along the banks of the river Stort. Half Marathon completed with thanks to JC for the company. 2nd place and 1st female, so happy with that. 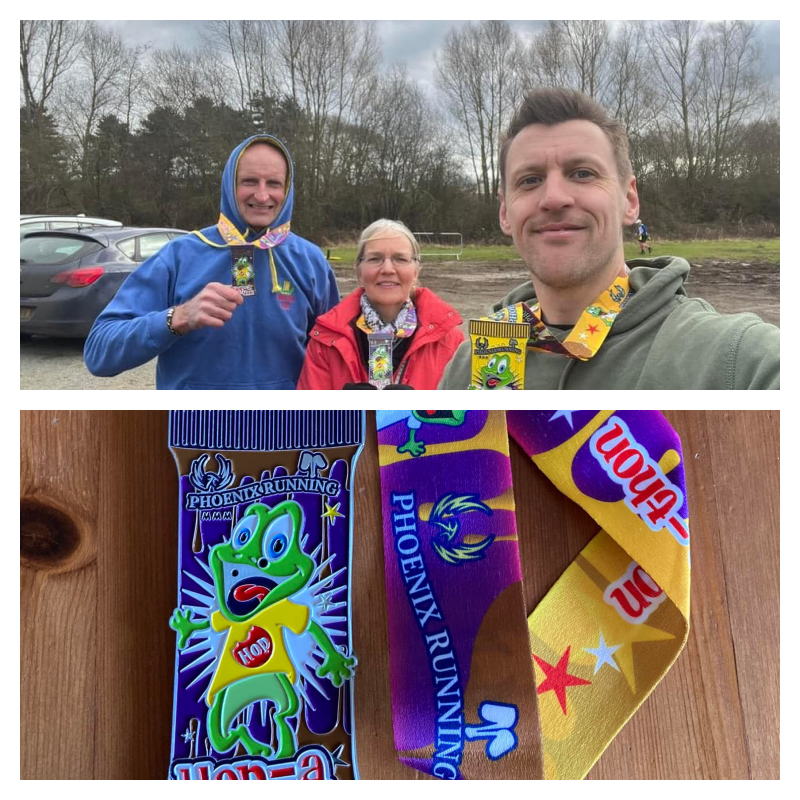 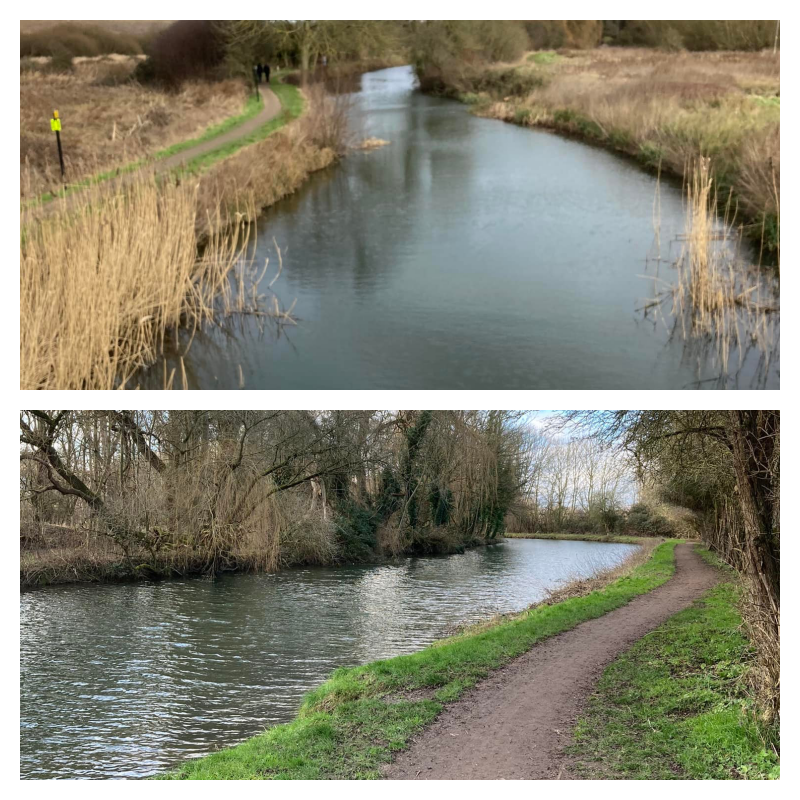 From Matt: At -2°C, it was a cold start. Some patches had beautiful sun and you needed sunglasses, while other areas were blanketed in fog and you couldn’t see very far at all. I managed some decent over-taking on the wider parts but was disappointed with my time and finished behind lots of others meaning I had to queue for the toilet…and that was just the drive there.

It was a ceded start in front of the Longleat Mansion with the quickest at the front, so I first came across Tim Willis and Aubrey Wood and had a chat with them, discussing various illnesses, operations and sore bits, before dropping further back to find Sharon Hardy Unknown to me, Melanie Denham and Joanna Henley were warming up in the gents and leaving it till the last minute. 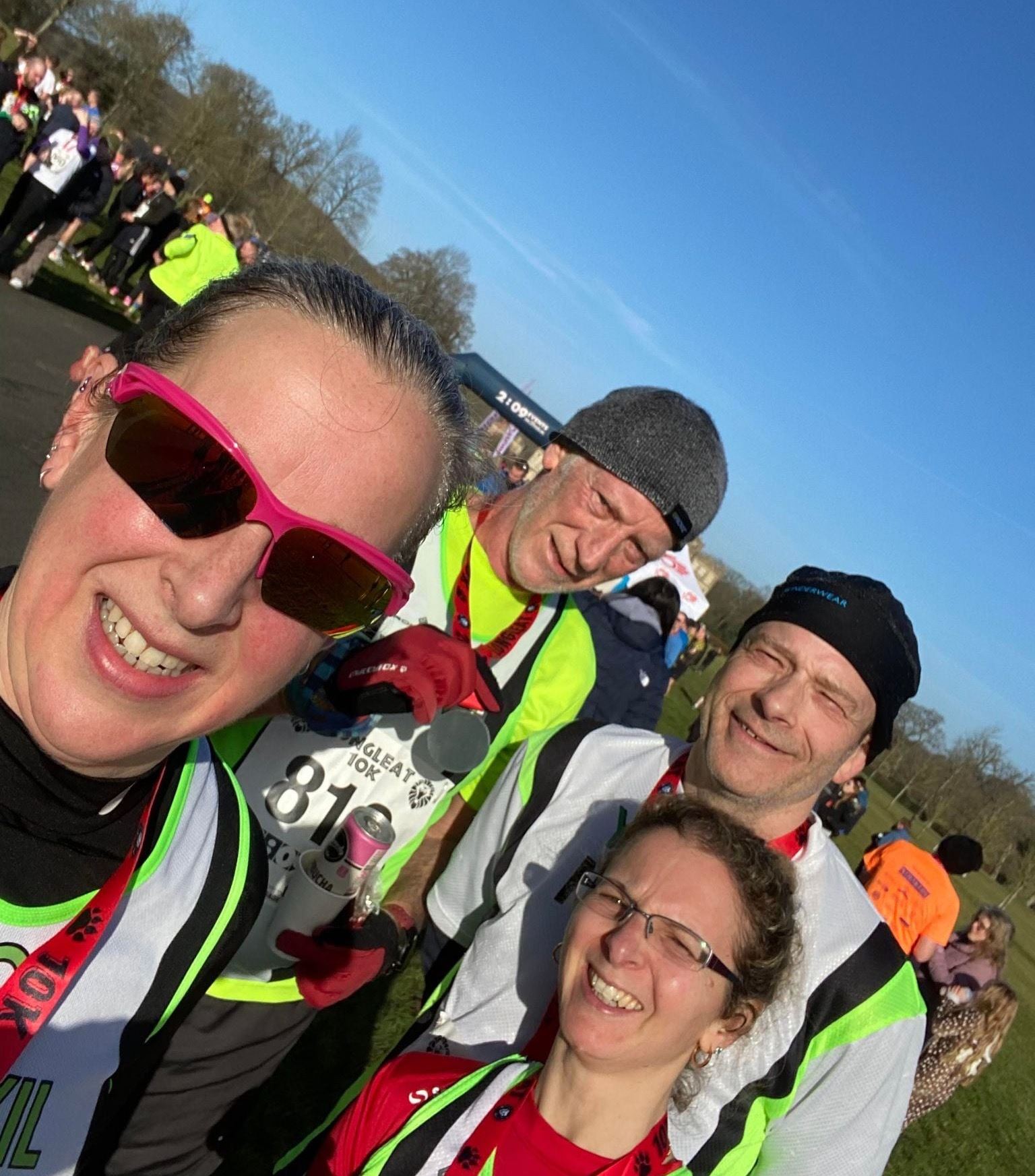 When the start gun went off, Jo and Mel were right up there competing with the best, while the rest of us had a more relaxed start further back amongst the hoi polloi. With chipped timing, position didn’t matter so we were all able to settle in and enjoy the first hill – it hurt! Too early for most, but at least you were warm by the top. The course then runs you back down the drive to the mansion, which looked great in the sun, before heading off through the edge of the park next to wallabies and some weird looking deer/elk things.

Mel had continued with her swift starting pace, while Jo settled in to her sensible 10k pace. Matt had left Tim, who in turn had left Aubrey. Sharon was doing a fine job but getting annoyed with people stopping right in front of her! After overtaking Jo, Matt was scanning the field ahead for any sign of Mel, but when he did see her, 150m on, he struggled to make any inroads. Jo was battling well with Tim while Aubrey and Sharon ran their own races.

A gentler, but still steep, hill is tackled out in the park before a nice downhill section back through the car-park. This leads back to a second lap of the initial hill. It seems only Mel was able to run all hills, while other YTRRC runners selected for short walks, so kudos to Mel. However, the tactic meant matt finally started to close the gap. At the peak of the hill Matt was rewarded with a glance back from Mel…he knew she was probably wondering whether he or indeed Jo, would catch up, so when Mel looked back, he gave a cheery wave meaning “I’m coming to get you!”

Mel upped the pace, and it was only that almost all of the last mile was downhill that Matt felt he had any chance. Running a sub 7 minute last mile split, and legs about to give up, the overtake was completed. Everyone completed the race with excellent sprint finishes. Matt and Mel battling to the last, Jo trying to beat every single second, Tim finishing red in the face, and Sharon saying “I’m gonna die”…but if you’ve got breath to say that, I guess you’re not really! Results not out yet, I'll tag it here later. For the blog Bungy Williams and points Lesley Nesbitt. Apparently, everyone was smashing course pbs left, right and centre! Fantastic effort team

Apologies to Aubrey Wood for not seeing you after, but wearing a black top meant you were impossible to find...also, I forgot to collect my race tee...Oh no! Like I've not got enough!

From Lesley: Lovely sunny Sunday social club run this morning with 9 of us. Great company, thanks all, with recovery coffee and cake at Ninesprings cafe of course . Thanks for the photos Helen & Kevin. 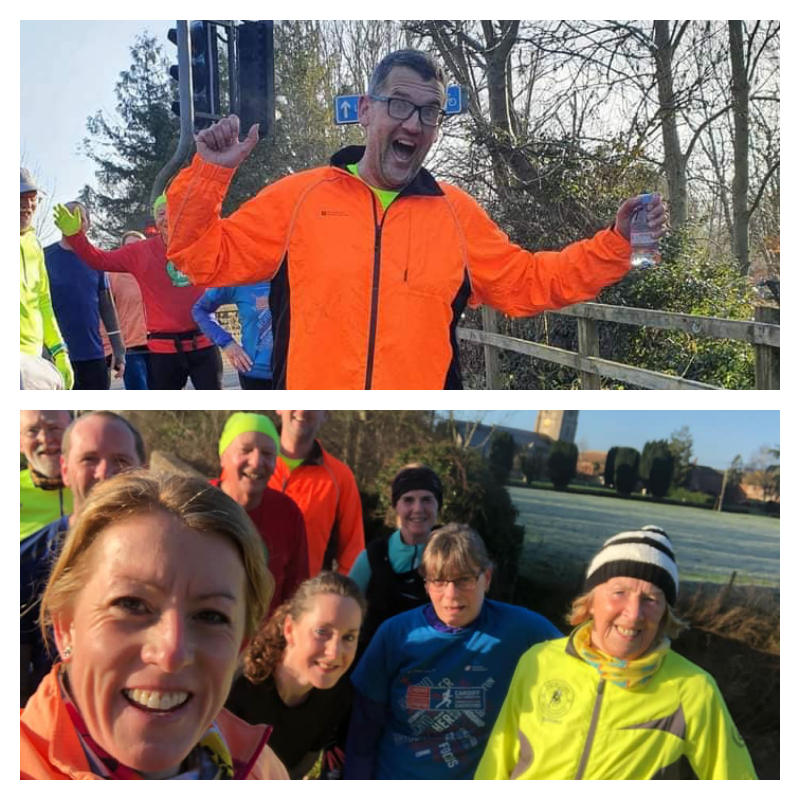 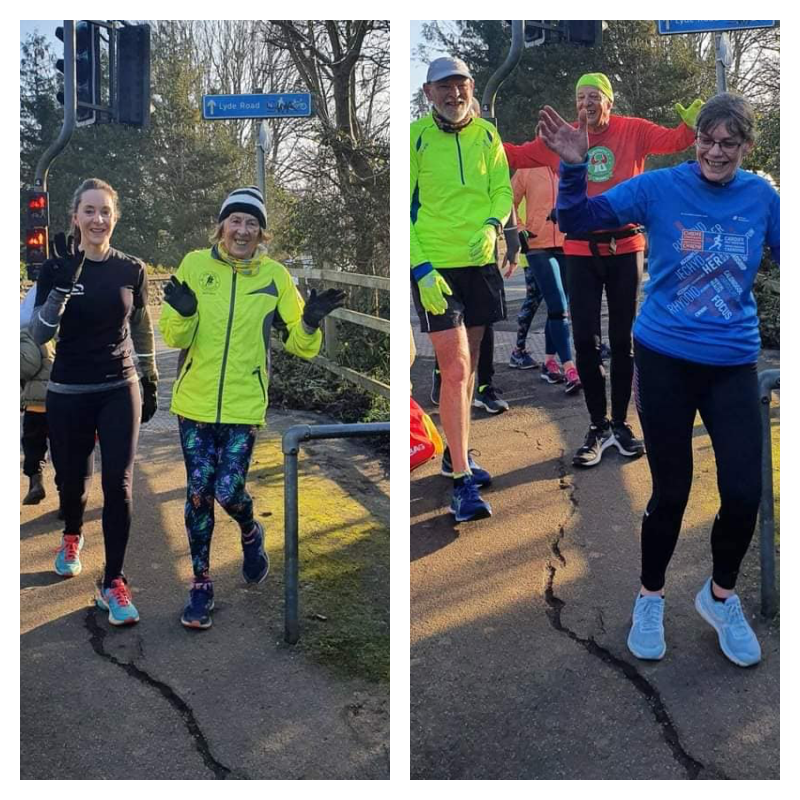 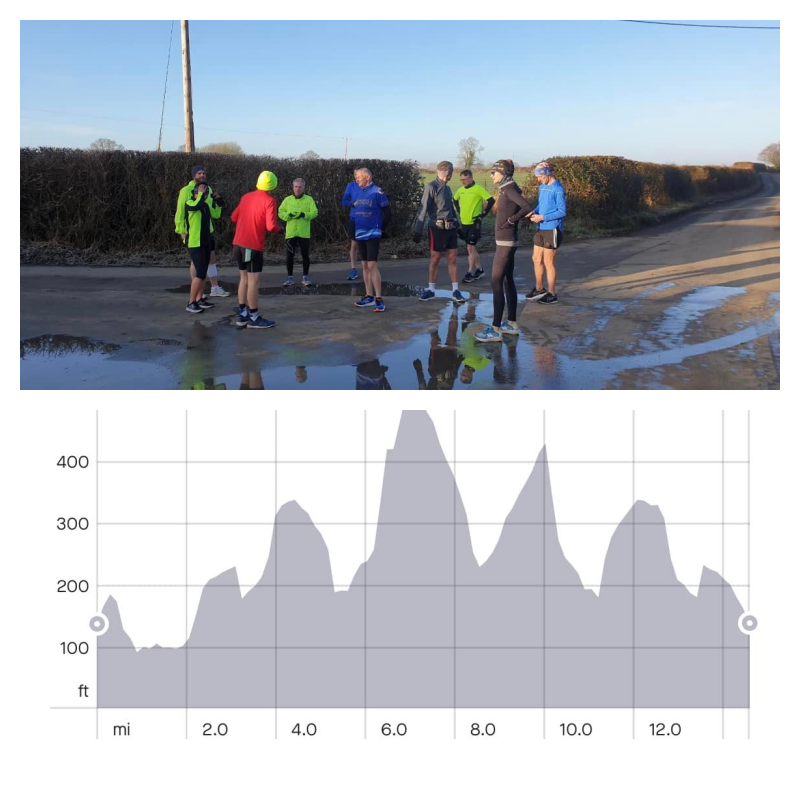 Any help any time between 2.00 and 5.00pm gratefully received 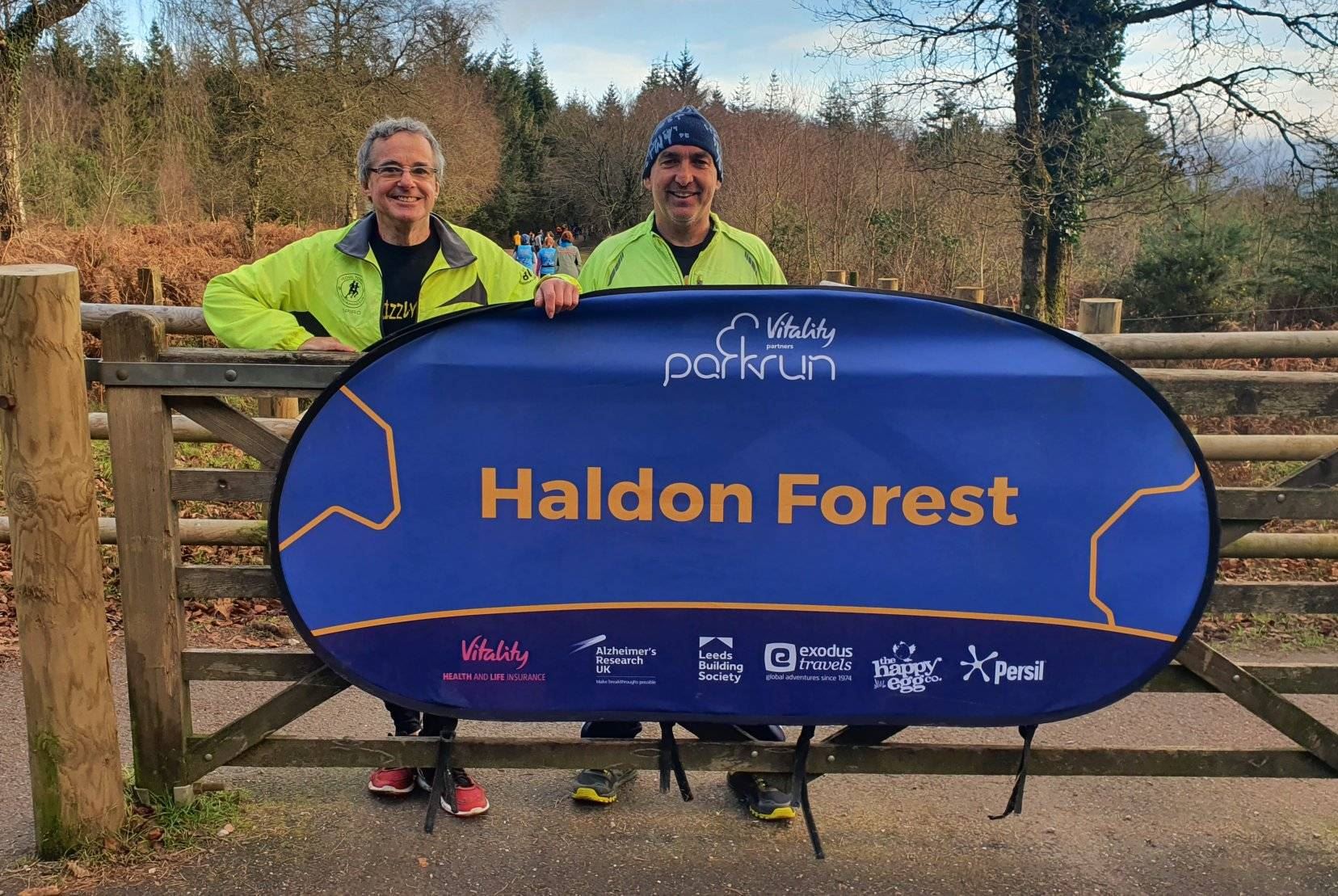 From Adam: Great YTRRC turn out at the Great Field Park Run this morning - Charles’ birthday! 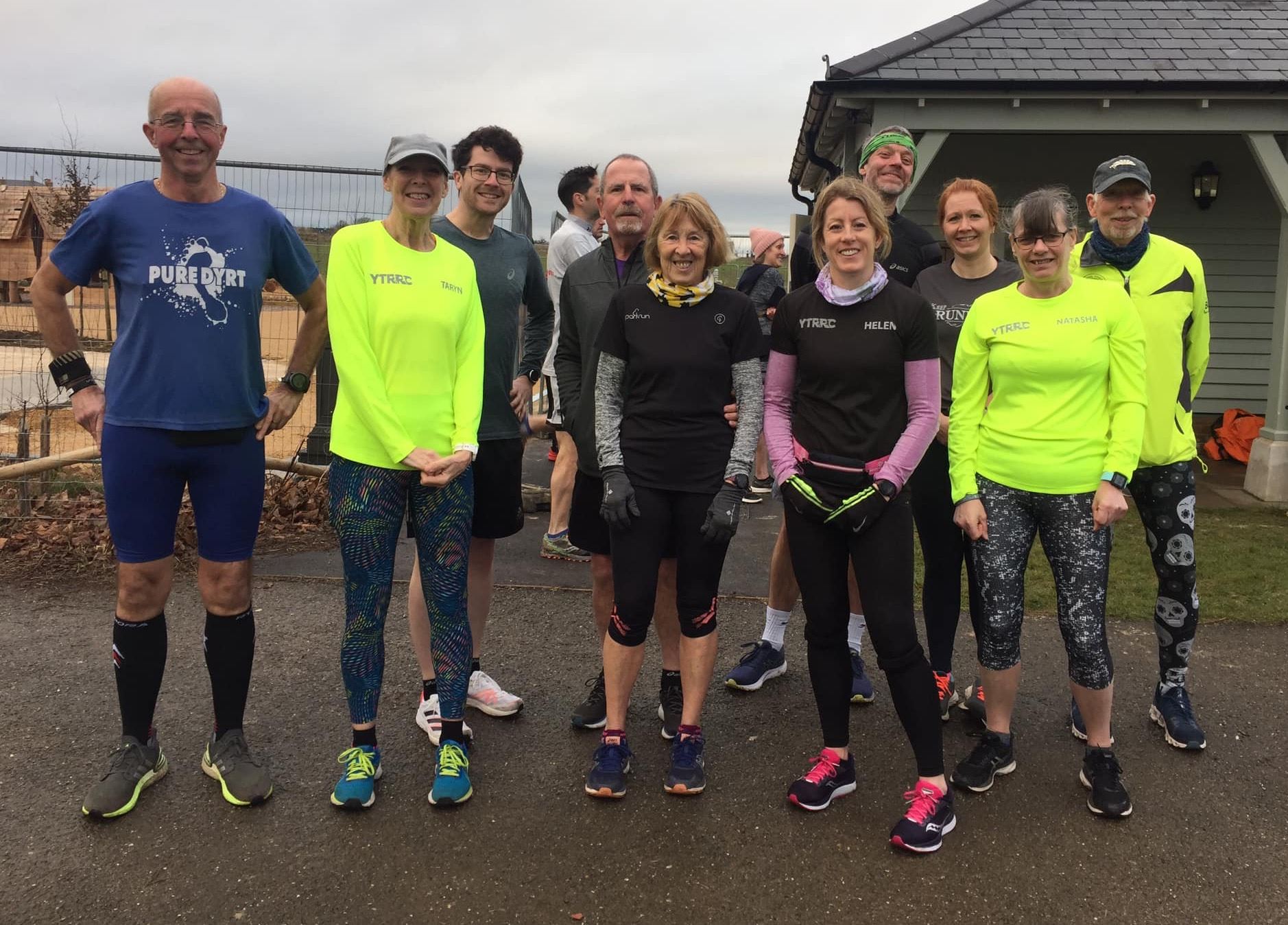 From Ali: Early start to Blandford park run this morning. Good to see Luke Hicks and thanks to Rob for supporting with Storm. Coffee and cake after. 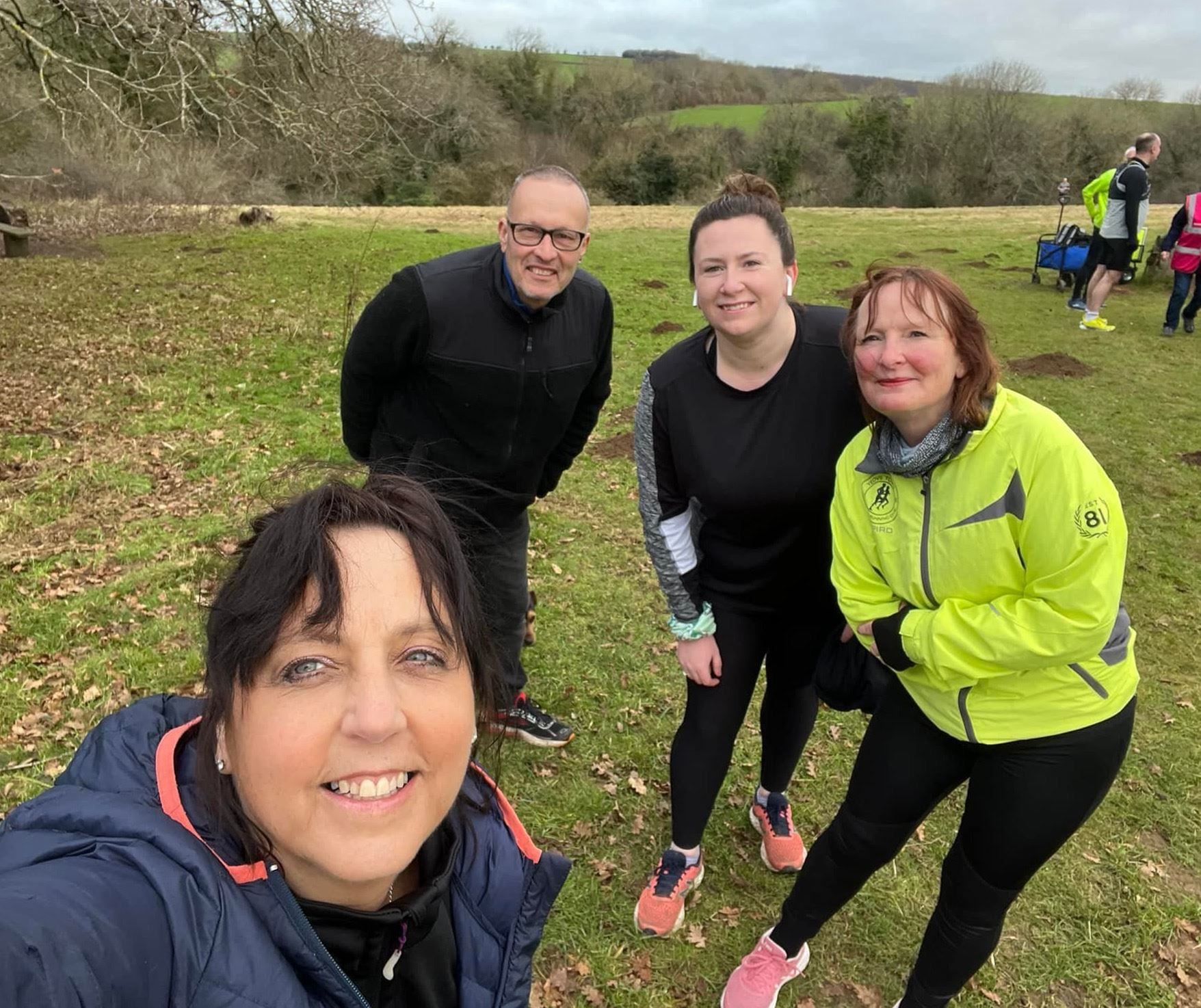 From Mark: There was a good turn out tonight both for the fast group and the not so fast group. JC led Sue, Anita, Rachael, Paul, Linda, myself, and a new member who’s name I don’t have. I joined the group at the last minute only intending to walk due to knee injury. Leaving the pub, we ran south and turned towards Littlewindsor. Stars were on show as there was no cloud cover. We turned right and right again and ran down the lane to Seaborough. We split and some took a route cutting out the village. We turned right passed the phone box and barn. The group re-joined at the junction below Knowle hill. We turned right and slogged up the long hill and were passed by the fast group coming up. At the top, we continued the undulating route back to the pub. In the pub it was Pie with help yourself veg and an optional pudding. The meal was excellent and it was a good pub run. Thanks Phil for organising. 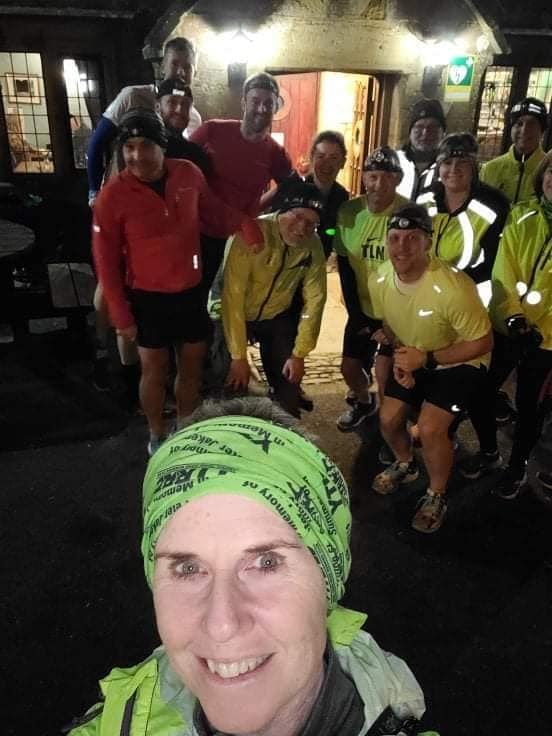 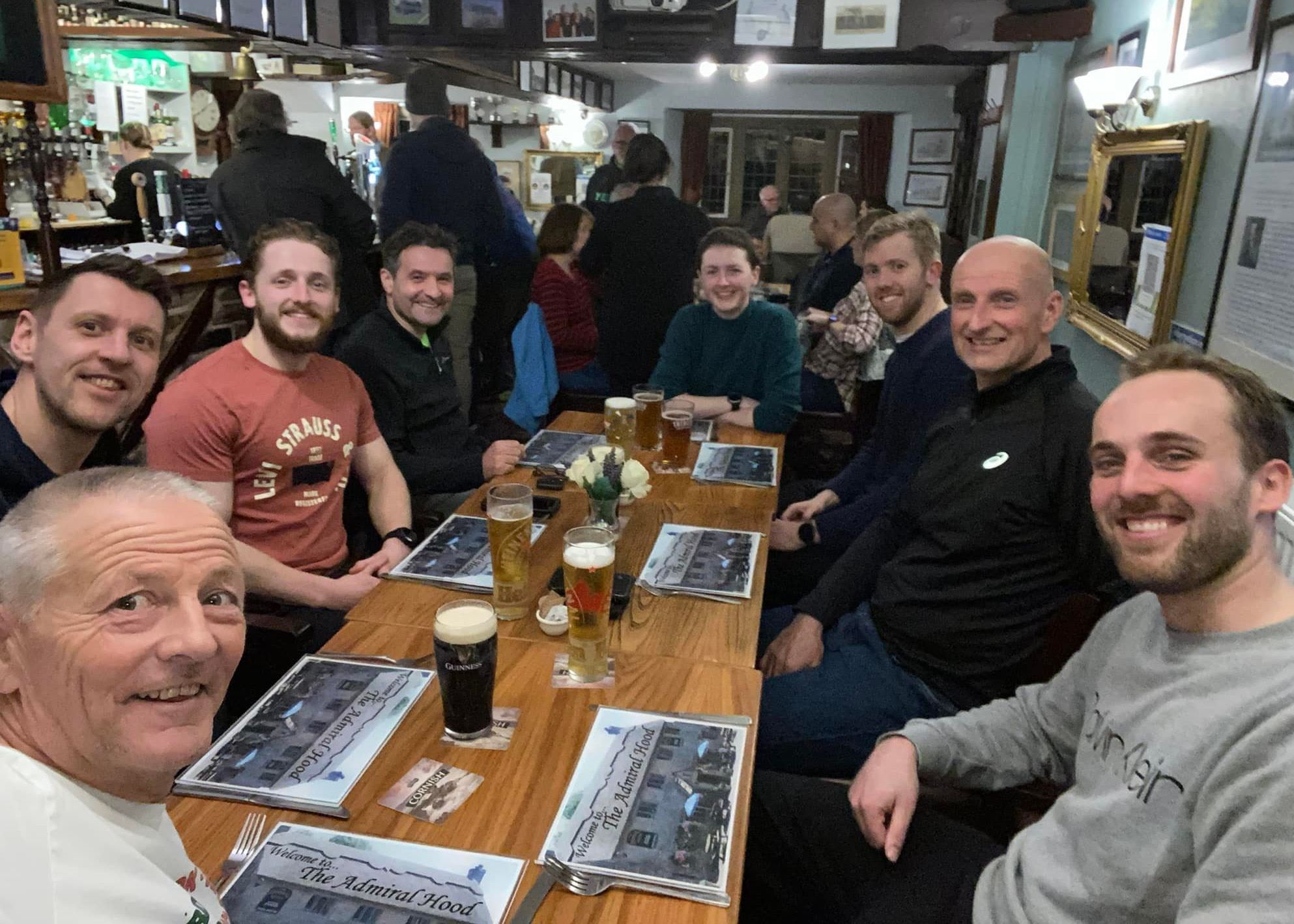 From Brian: I have passed 500 miles on my virtual WCP 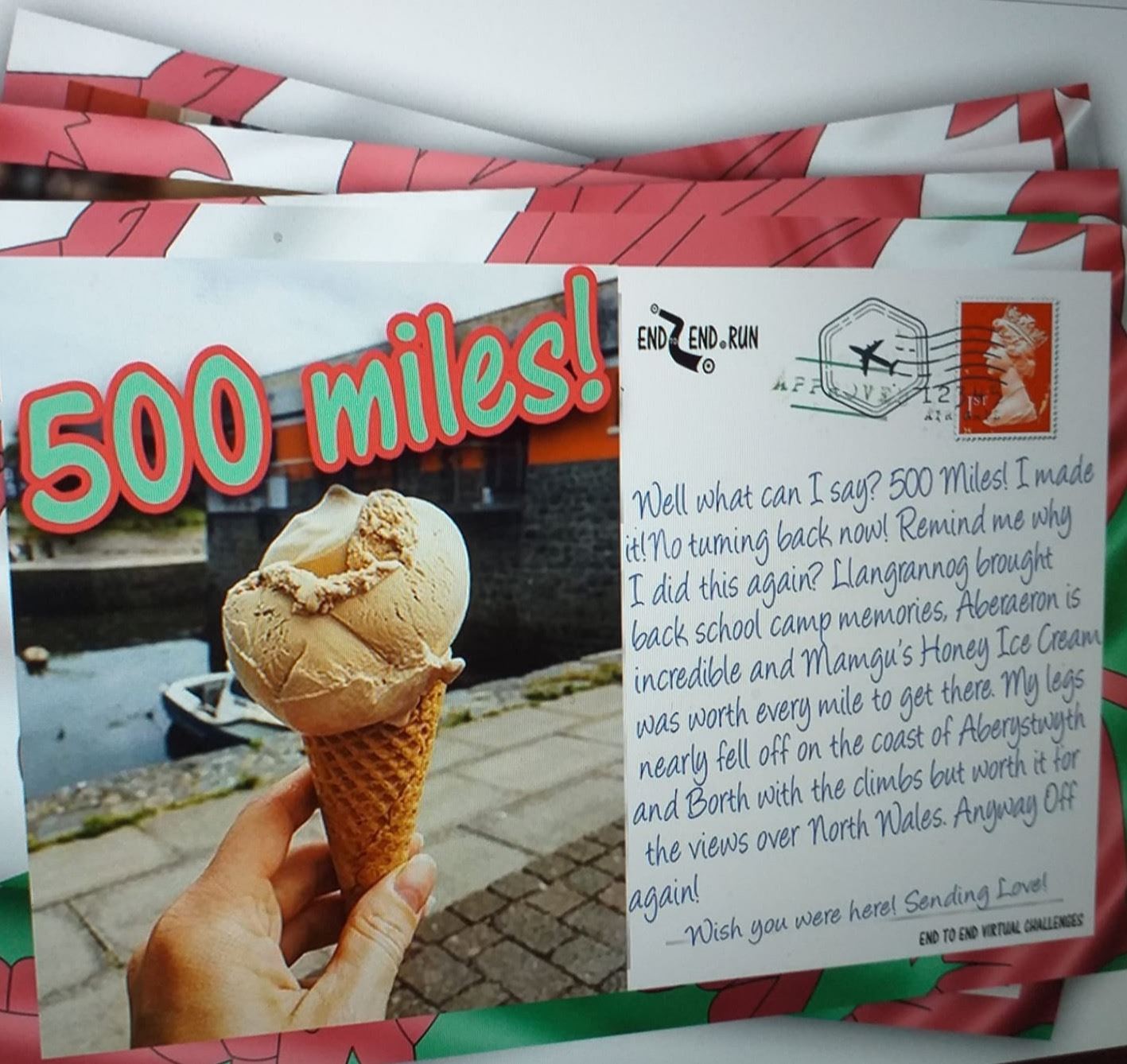