A Day at Larmer Tree 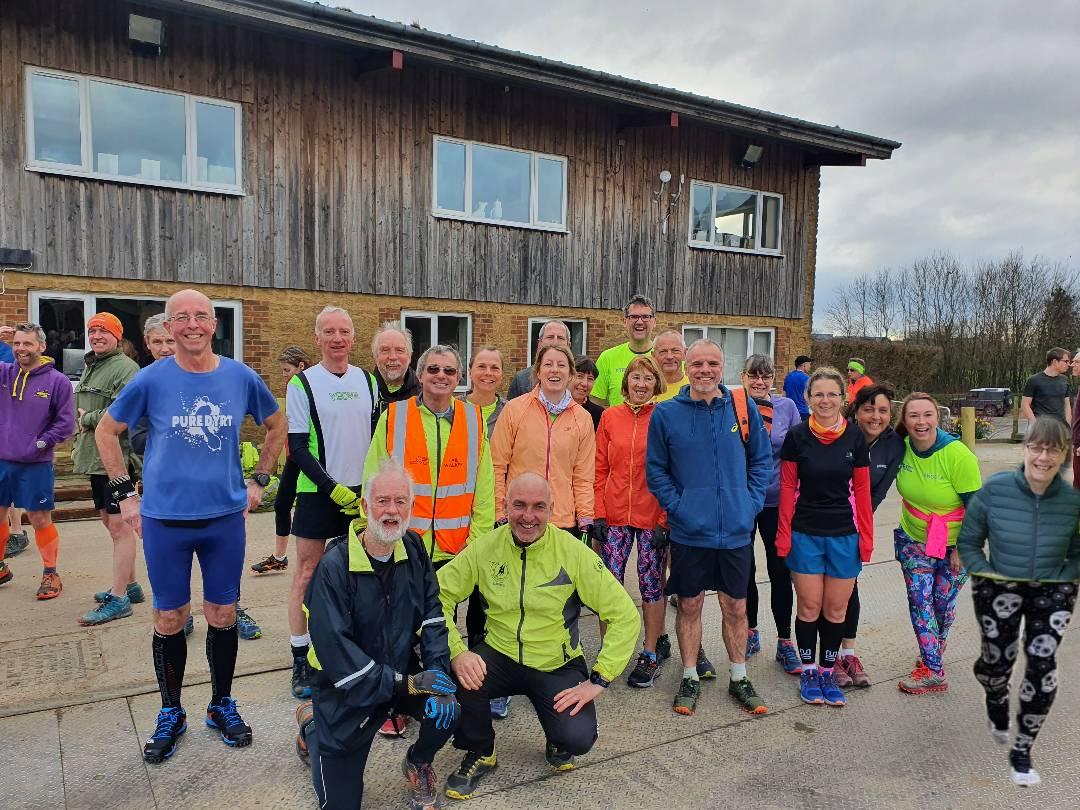 From Tayrn: WSR Larmer 10m with Kirsty Norman DONE. Thank you for driving pacing and company- we did well. Cold but no rain- the sun did try to shine! Not too much mud! 3 hills!!! And Kirsty the strength to stay strong to the end 800m ahead of me but under 2 hours! Great event. 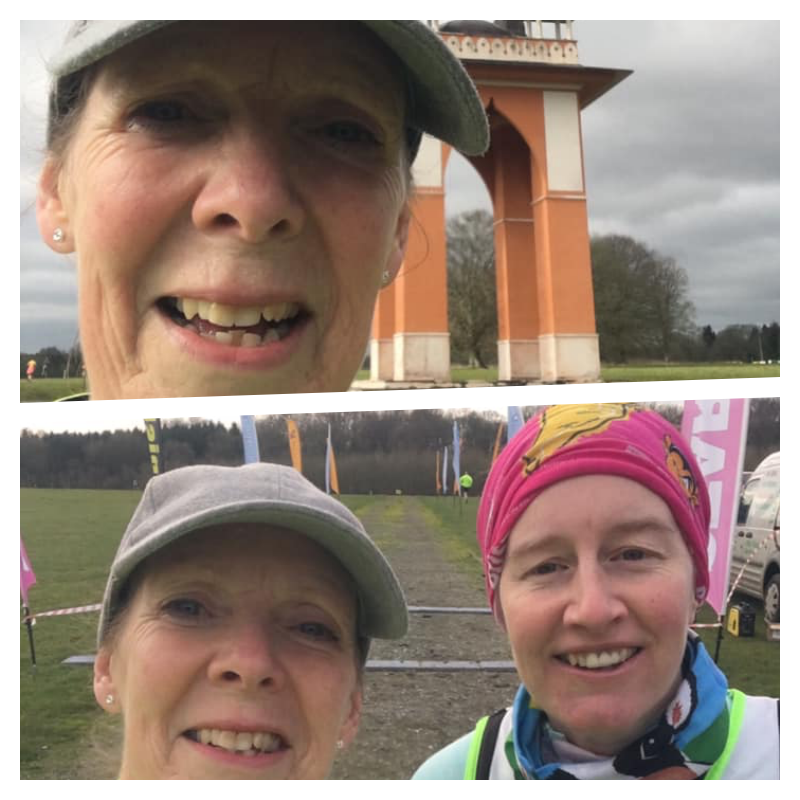 The Marathon had Dave Tisley in 12th place and first Club member followed by me in 42nd place, JC was 118th and out first lady was Anita in 172nd place. Tom also ran but can't see his name in the results.

From Matt:  Cresting Came Down, I shouted "I can see the sea!!!" so I won that and having such a great start to the day, I continued on my way to the Bowleaze end of Weymouth for the Weymouth Bay 10K. Spoiler alert - I'm only going to write about the top three because the other YTRRC runners were rubbish and don't deserve a report!

A biting wind was not lessened by the odd glimpse of sun, as I made my way to the start. Melanie Denham and Kirsty Norman were cowering behind a hedge but on the wrong side as it was less windy the other side. We had our photo taken showing how cold we really were, plus a random photo bomber (I was going to edit him out, but hey-ho).

A quick race briefing about the route and we were off. Starting together, we fanned out and eyed each other for a few moments, before Mel took the lead with Matt and Kirsty dropping in behind. Two loops of the sloped Bowleaze Green was tougher than you would expect, although the going was good, so no need for trail shoes. Then its a made rush on the pavement downhill, before starting on the promenade.

Matt had enjoyed the downhill and was finally in a better mood (grumpy so-and-so) so with the wind in their backs Matt gradually caught and passed Mel.

Heading towards the harbour was tough going as the pavement got busier than a tree full of crows, with sightsee'ers (another e perhaps?) wandering around aimlessly. The route was described "go as far as you can" and they weren't wrong - out past the pavilion and then finally a water station and the turn-around.

Matt was aghast to see Mel right on his heels, and then Kirsty not too far further back, so the pressure was on! Having turned round they now faced the strong wind on the way back, so with running noses they kept going.

Kirsty was, of course, running her second race of the weekend having battled Taryn Monks round the Larmer 10miler on Sarturday!

One tactic was to duck in behind the runner in front for some wind relief, but this wasn't easy as you had to catch them right up, so it was all about forcing progress into the teeth of the wind. Paces dropped by at least a minute per mile, but knowing the end is coming forced our three heroes on.

Even with the end in sight, it takes time to get there, but finally Matt crossed the line in 50:40 to be first YTRRC. Mel was moments behind for second YTRRC and Kirsty shortly after as third YTRRC.

Medals were awarded and then back to dear old Yeovil and home to warm up! 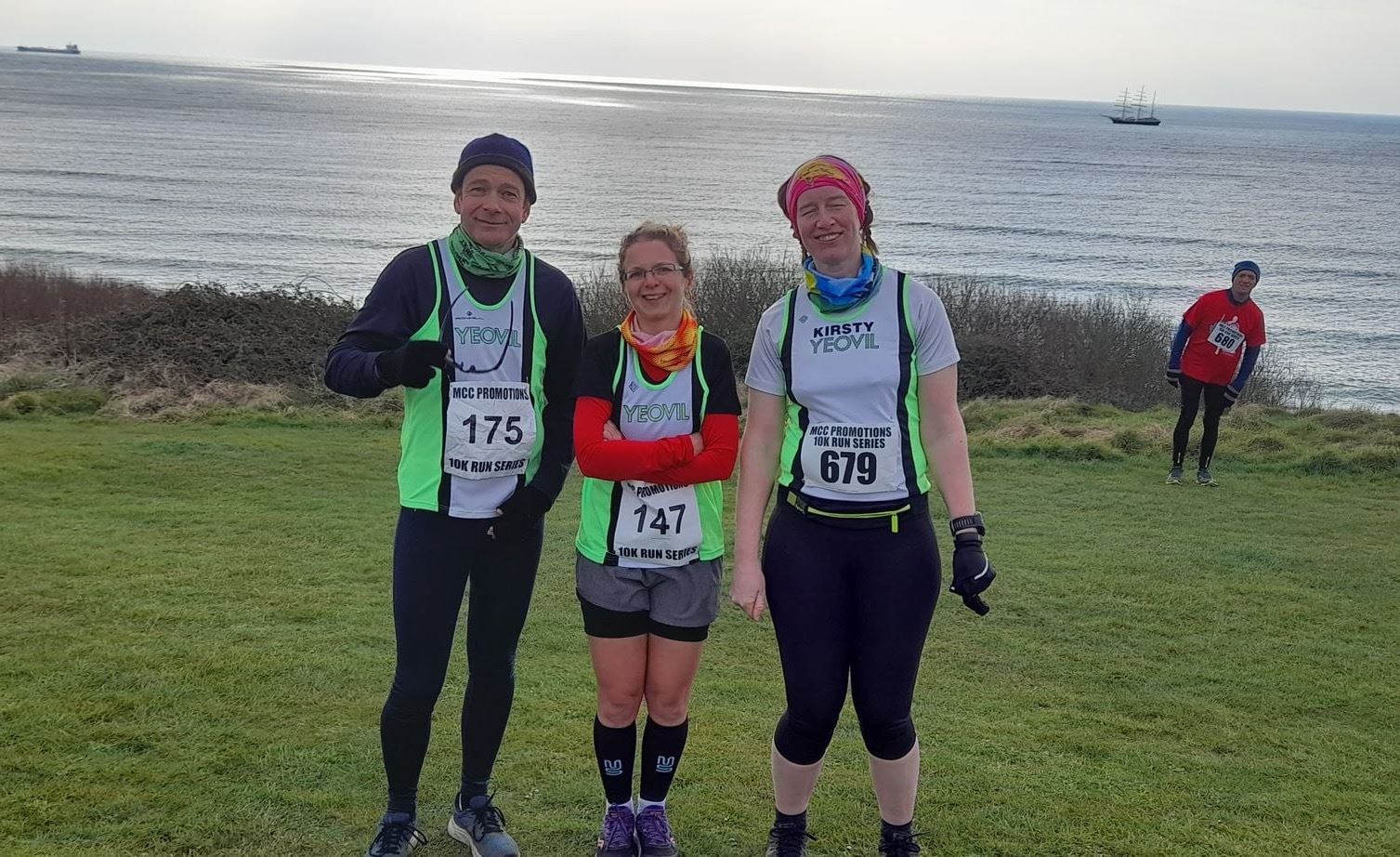 From Richard: Amsterdam park run, not such an impressive turnout as Frogmary Green but needless to say it was flat! 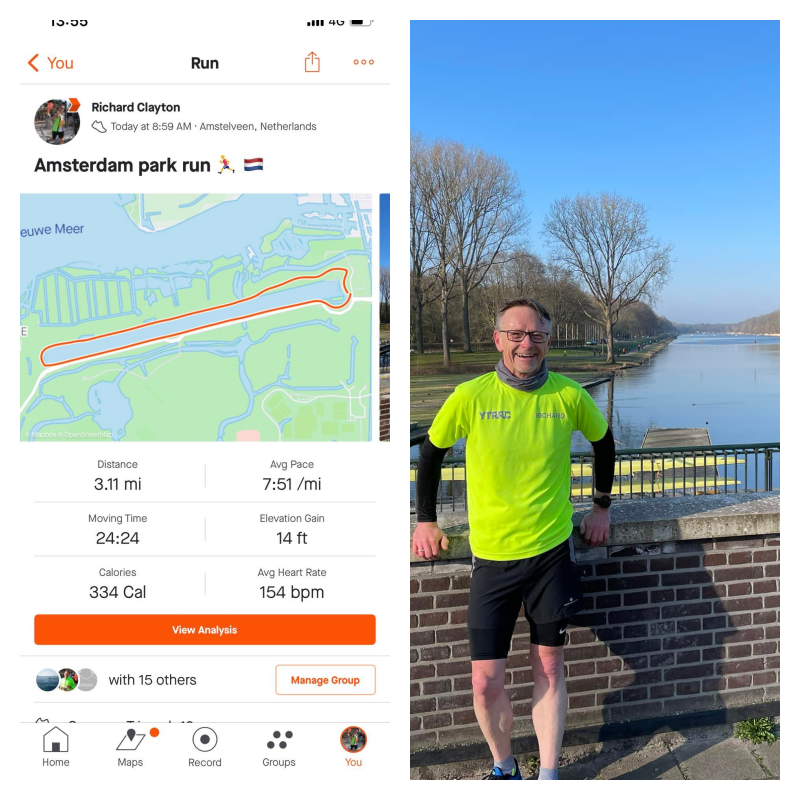 From Claire: Poundbury parkrun with Sharon Hardy who is back with a vengeance! 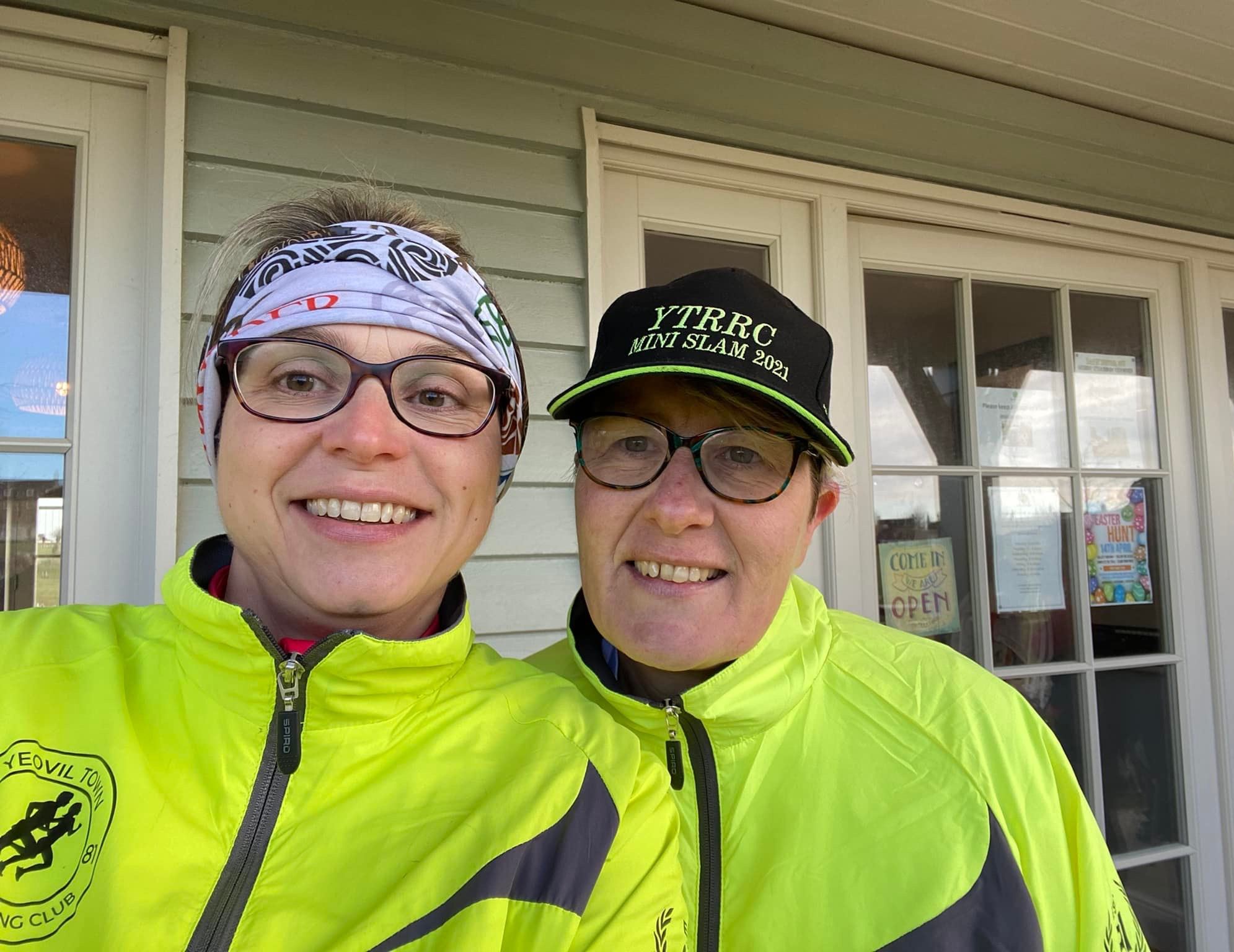 From Daphne: Eden Project ParkRun for Kim & I today. 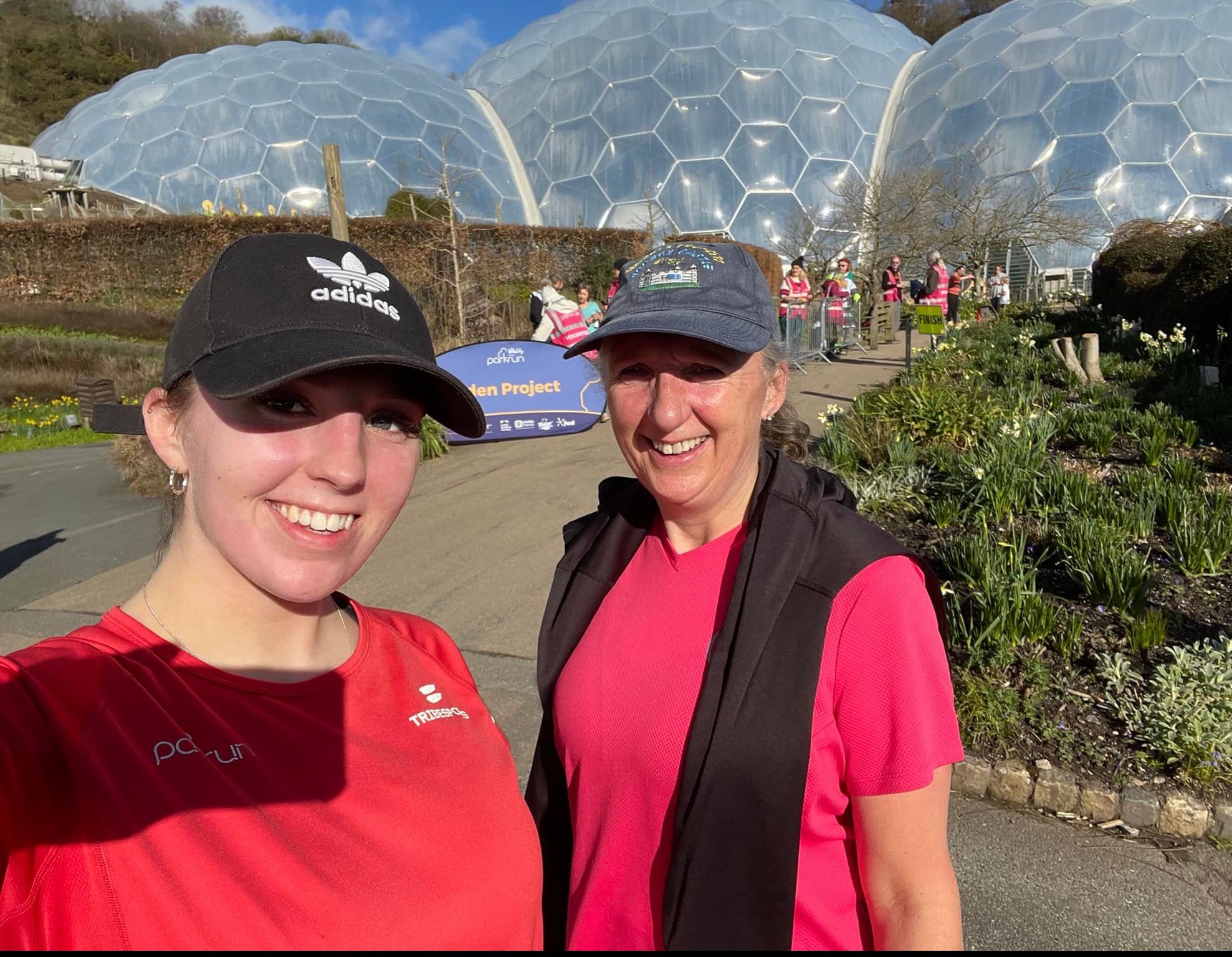 From Kev: Frogmary Green parkrun great turnout for Yeovil Town RRC, the first official run of these park run. Someone was late.... 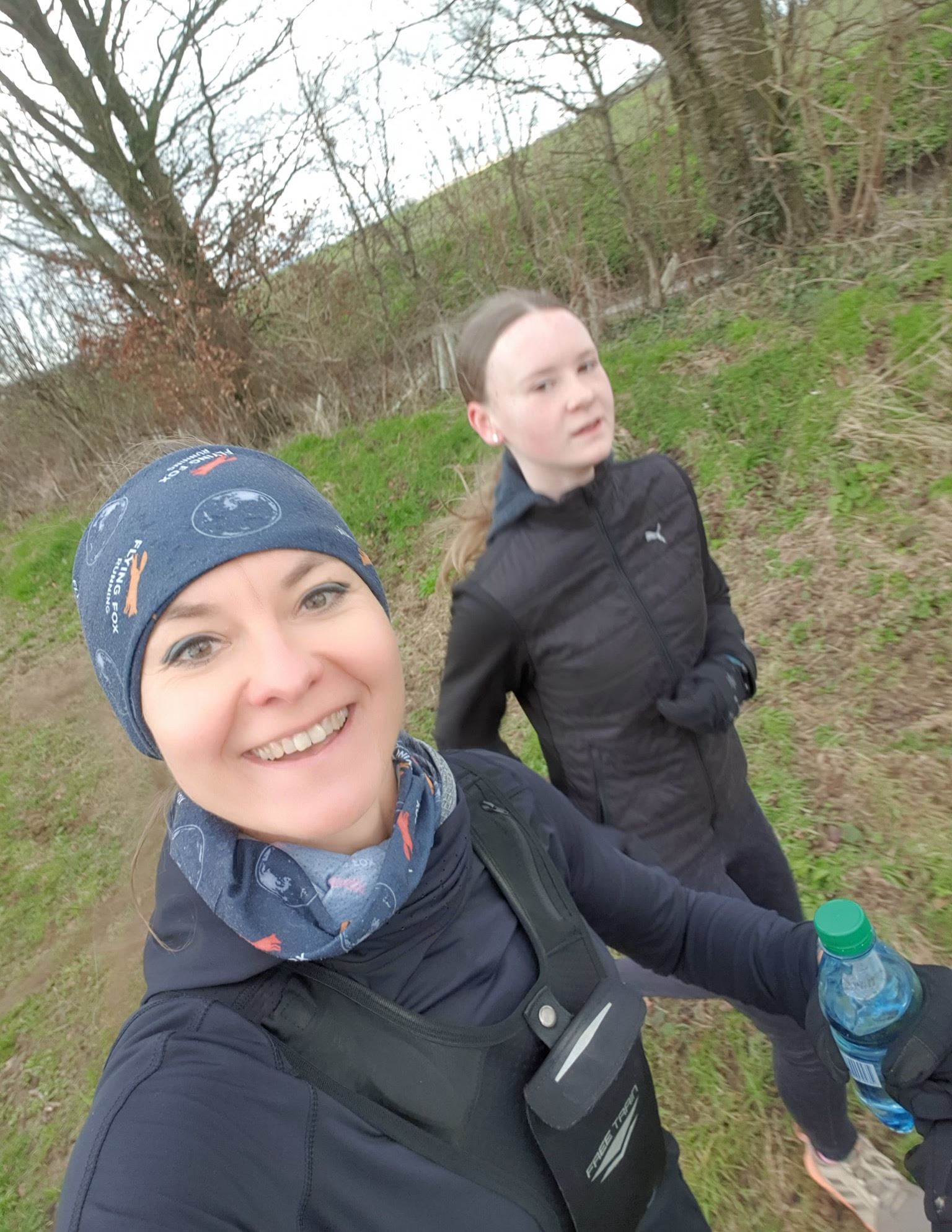 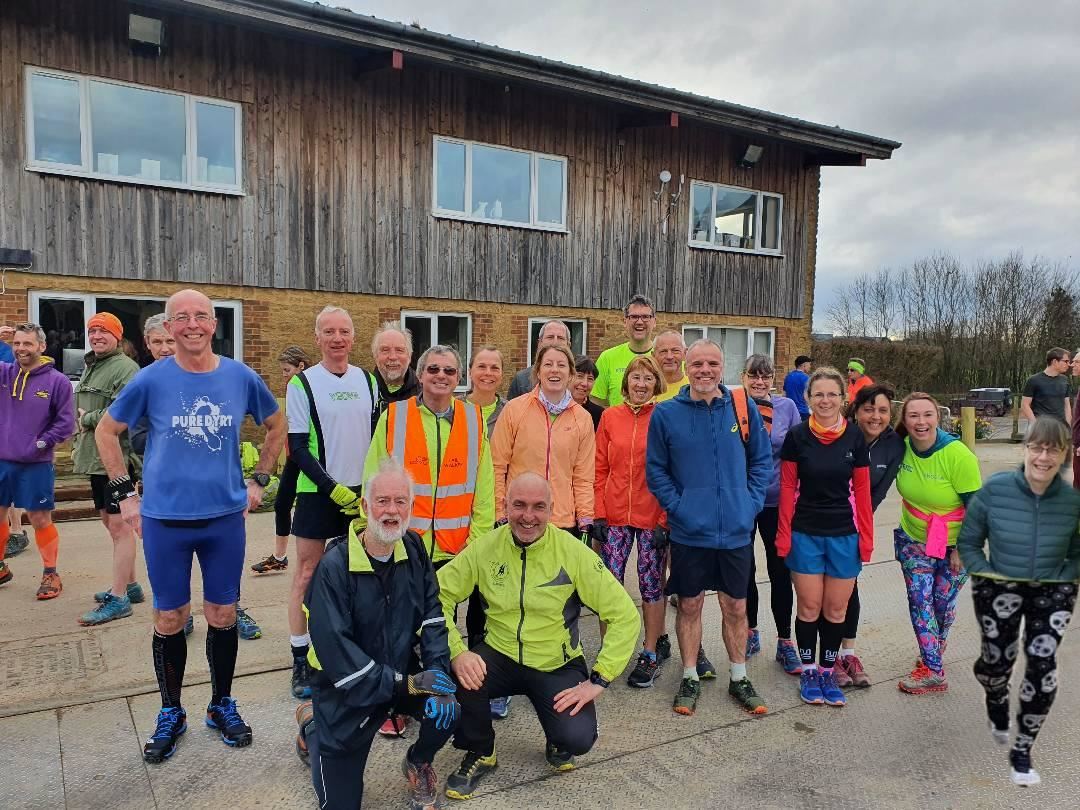 From Lesley: Lovely Sunday 10 miler run with these lovely people who kept me going today, having already run 10 mls - this marathon training has a lot to answer for. Well done to Nolan who ran a total of 19 mls, Helen 13 mls and Paul who ran his longest ever run. Thanks to all for the company. 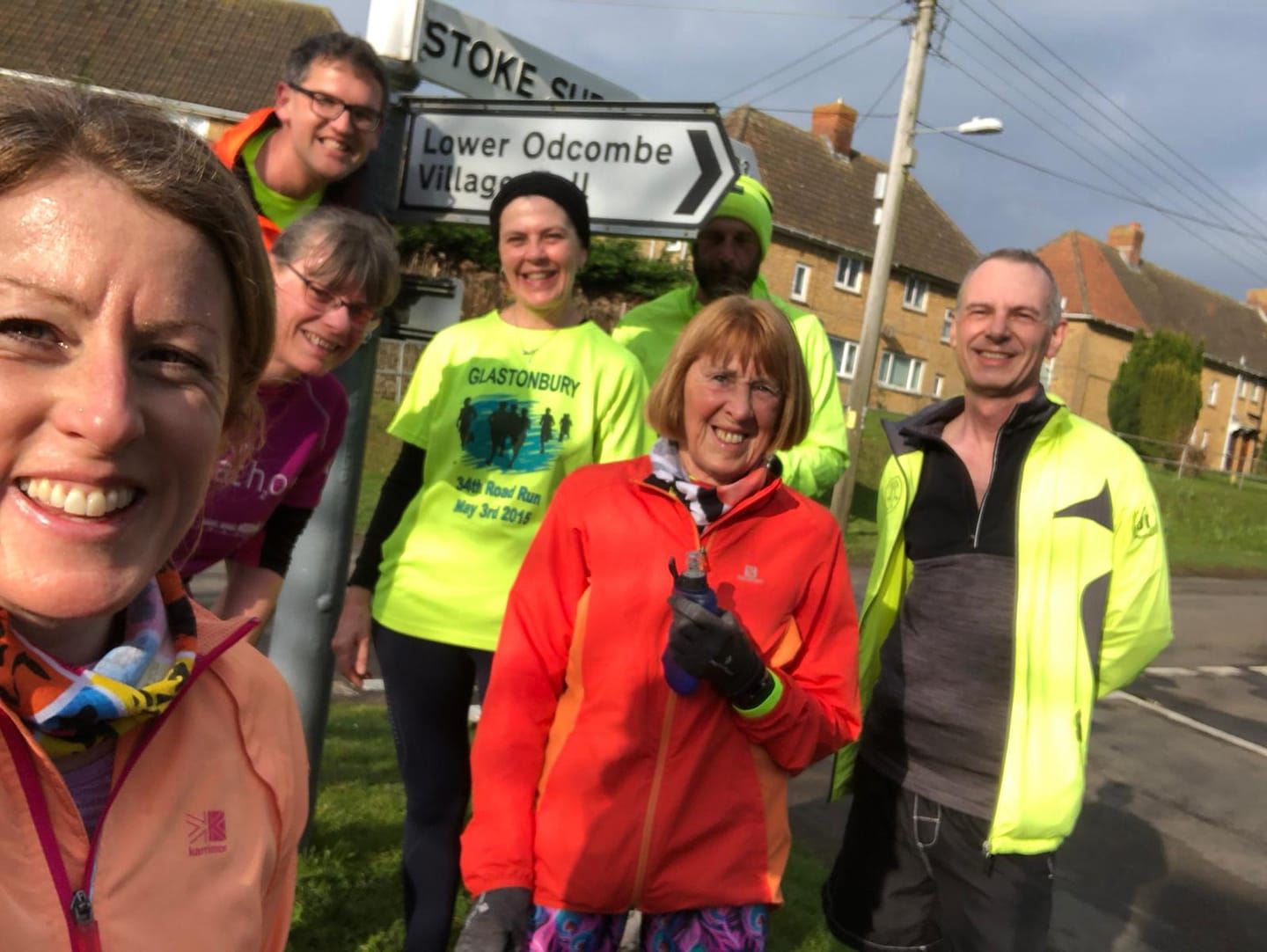 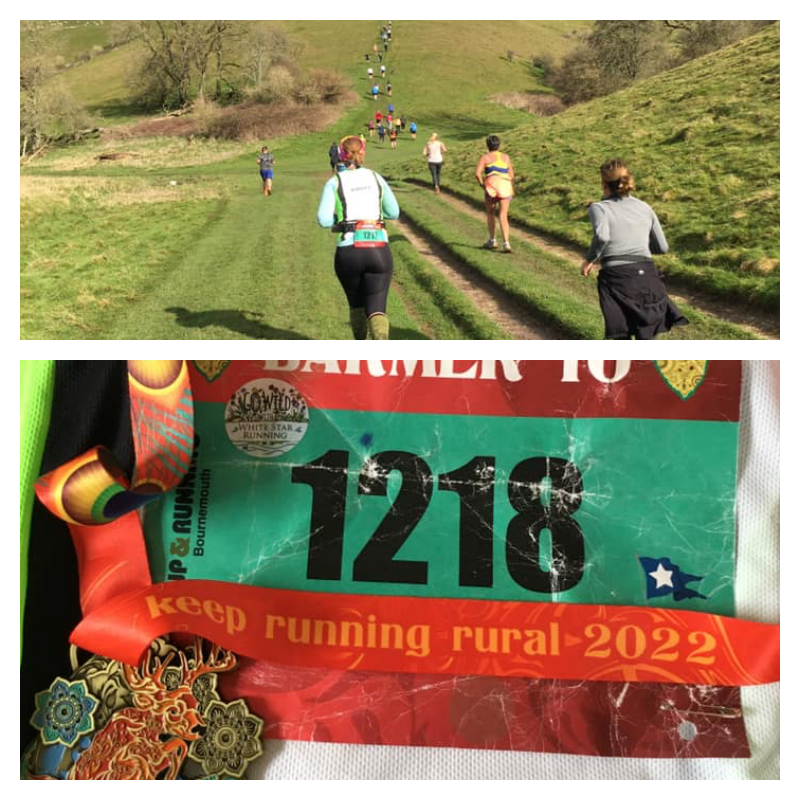 From Mark: It was good to be back at the Muddled Man. I was privileged tonight to lead a group of seven (Kirsty, Suzanne, Lesley, Louise, JC, Paul, and myself). The faster group was also well turned out. I made the route up at the last minute remembering bits of various previous runs, and not wanting to go the Merriott. It turned out to be almost exactly 6 miles which was a good estimate. We started by running to Middle Chinnock via Snails Hill and East Lane. We continued climbing Smoky Hole lane and turned left at the top. The glow of Yeovil was to the north east. Descending down Pease Hill we stopped for photos. A wooded horse was lit up in blue across the valley. At the end we turned left and ran through Chiselborough. At the edge of West Chinnock we turned left and right and ran over Poop Hill Bridge back to Middle Chinnock. We ran back up East lane and back down to the pub. Great pub and food, thanks Phil for organising. 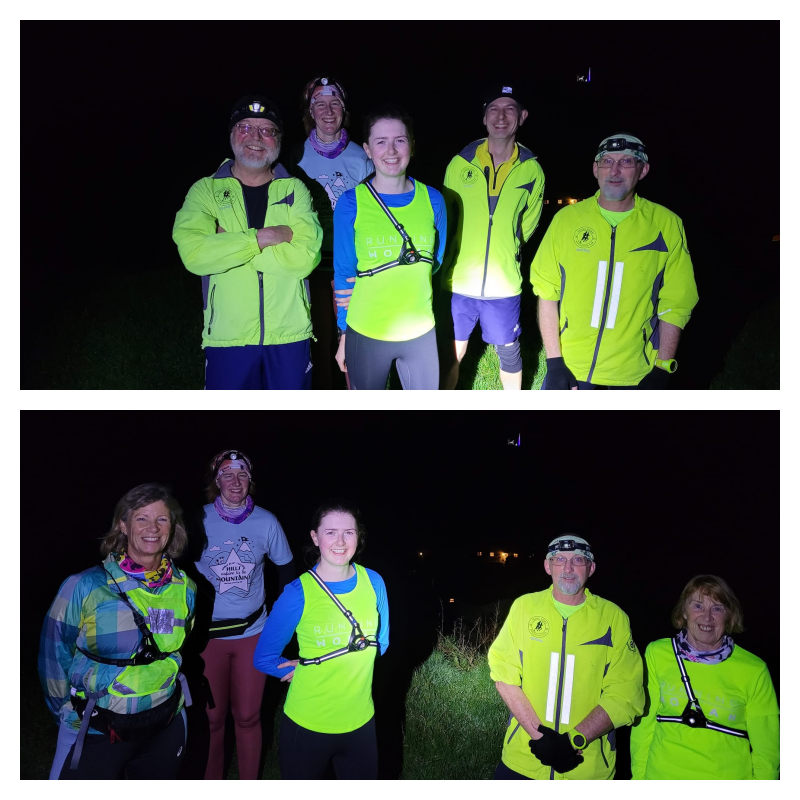 From Brian: 800 miles reached on my virtual WCP I have also started my virtual 1,600 mile Trans Europe challenge 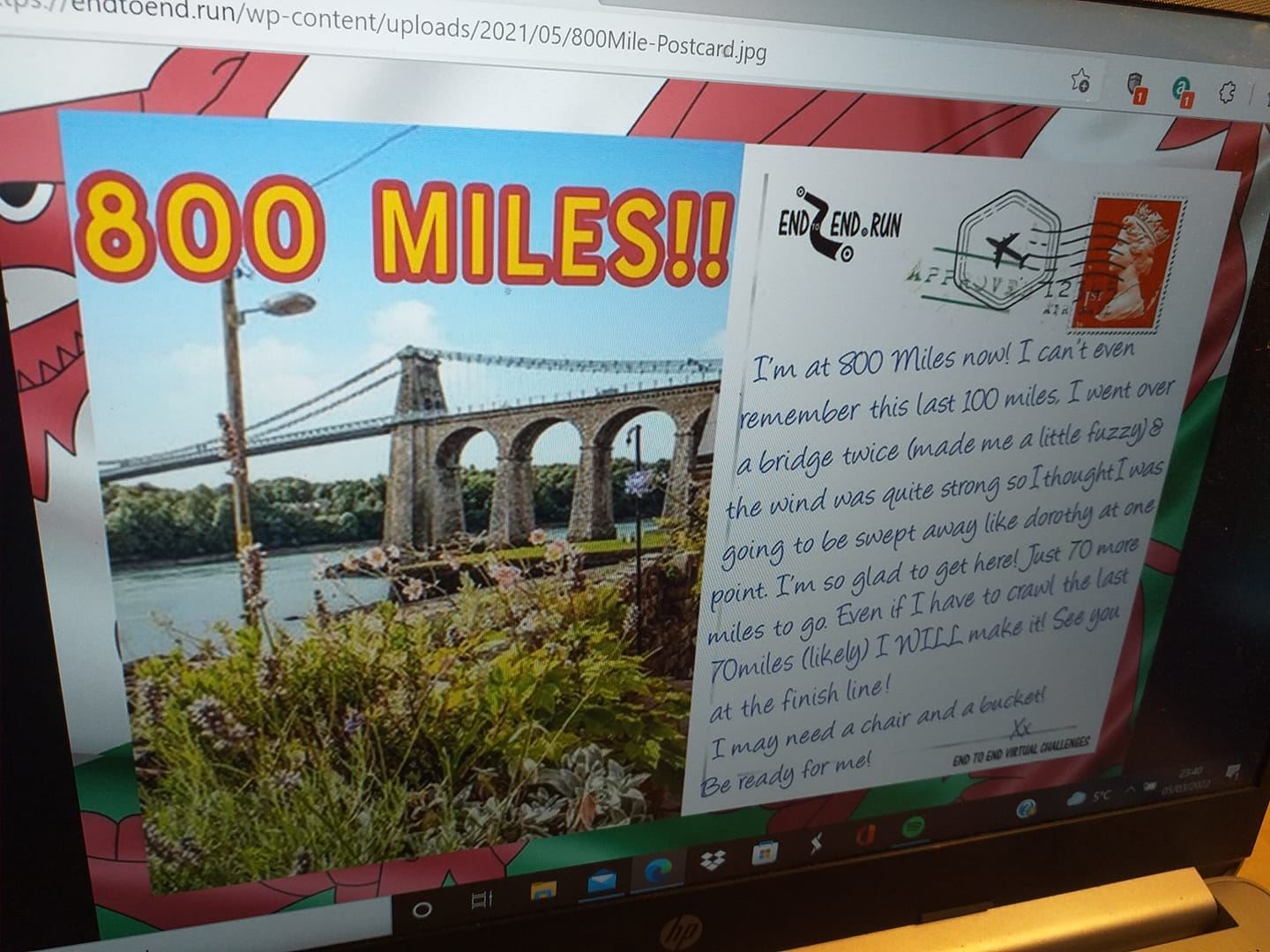